Rip and tear as the monster.

Carrion is a reverse-horror game that lets you play as an amorphous mass of flesh, tentacles, teeth and claws, rampaging through a military complex. Made by the creators of Butcher, it retains the brutal violence in a pixelated metallic world. However, Carrion is not simply gory fun, it is also a unique way to control a character.

If you are a fan of the classic horror movie The Thing (1982) by John Carpenter, chances are that you will want to play Carrion. This time, YOU are the alien monster, using vents to your advantage and possessing humans, or maybe you prefer to grab them with your tentacles and shake them like a rag doll until you rip their spine out of their skulls, as the walls get painted red. Juicy. 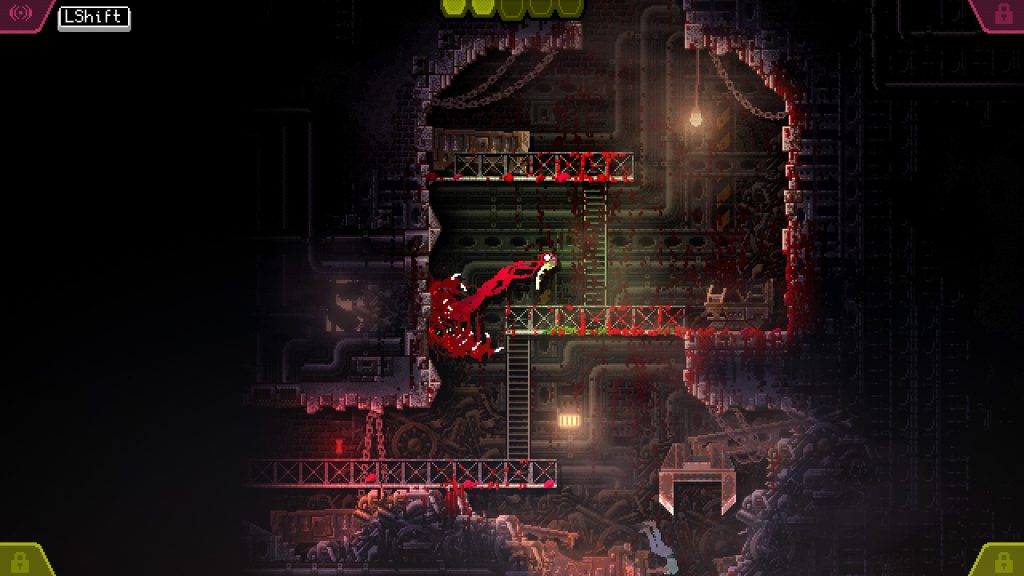 Except for a few mysterious flashback scenes, do not expect much in terms of story development, which is a bit of a shame but understandable. Instead, you simply explore the different areas of a base in order to collect your powers that were contained, and evolve your form to remove obstacles that were blocking your way to new parts of the complex. Sounds like a Metroidvania! 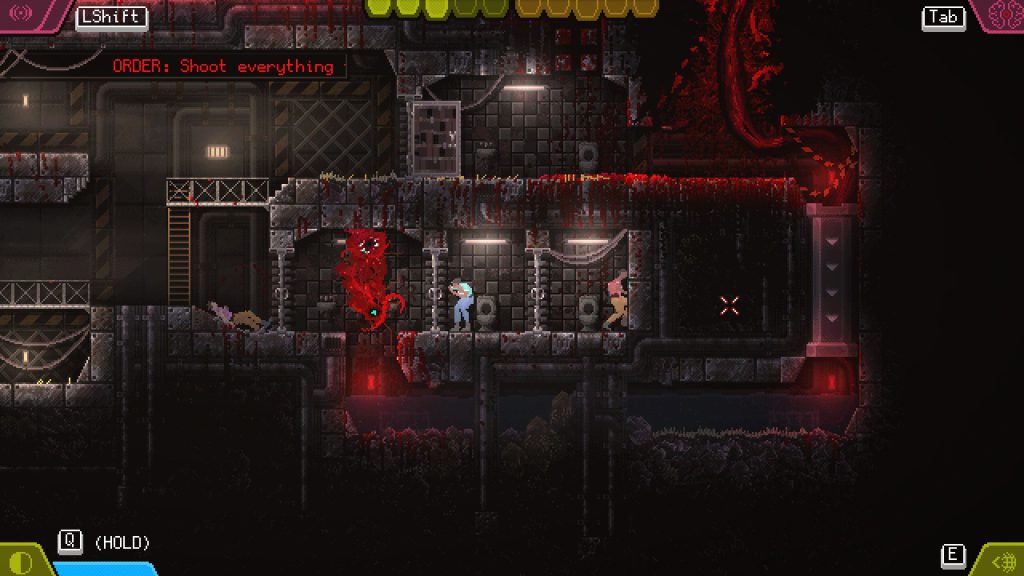 Carrion adopts the progression system of a Metroidvania, but with some considerable caveats. There is no in-game map (I suggest this Steam guide – but beware of spoilers, it also helps with the puzzles), and the layout is not like one giant area but instead one hub interconnected to different points of the levels. The problem is that you are being teleported from one place to another, in areas that look very similar, and it is easy to get lost. Although the game is short, I paused in the middle for the duration of one day; when I came back, I didn’t remember where I was or where I was going, and spent way too much time randomly navigating the areas. Another problem is that the choice to make a Metroidvania out of this game is hardly justified, as the only reason to revisit previous areas is for one extra hidden booster per level rather than entire new sections. This was a waste of time on two grounds: First, most of these hidden boosters require late-game powers, so I always left them for later and then once I had completed the game I had to track down each level to find their container and nothing else. Secondly, since these secrets require late-game powers, they can only be acquired at a time when there is no use for them anymore. In short, Carrion’s Metroidvania aspect is by far its worst issue: no map, confusing layout, unnecessary secrets, almost nothing new to rediscover. As it stands, being linear would have been an improvement. At least, backtracking wasn’t a frequent occurrence paired with map issues (yes, I am looking at you Hollow Knight). 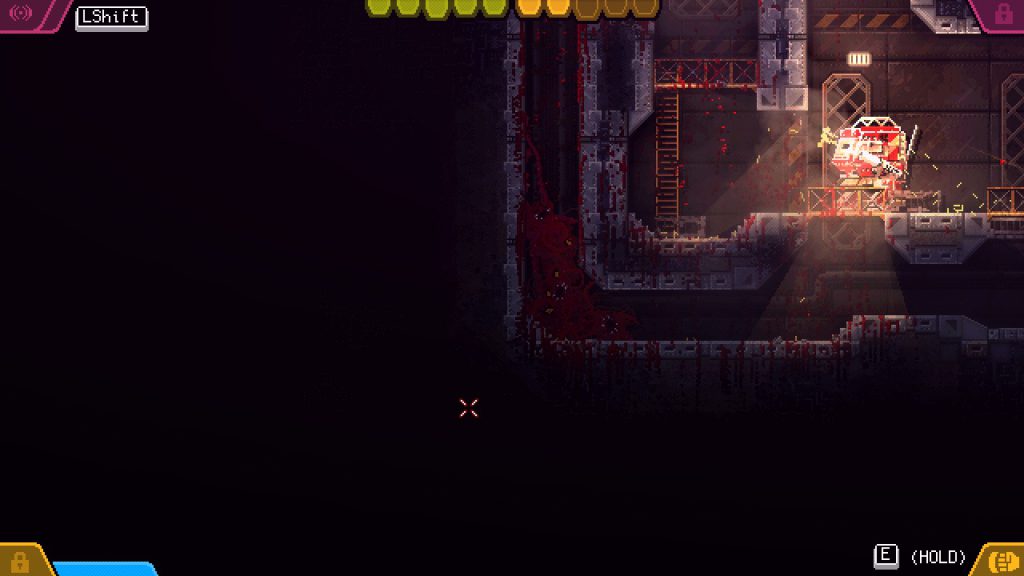 Evolving the monster is accompanied with more healthpoints, but Carrion does something particularly interesting and original. Depending on the number of healthpoints, the monster switches between three forms with each its own unique powers. With the tankiest form it is easier to take risks, but the blob is so large on the screen that it is also easy to catch bullets. Conversely, the skinniest form is better at sneaking, and since the player can die so quickly, there is a ranged attack to compensate and allow for a more careful playstyle, eliminating threats from a distance with a net made of gross white secretions. And that ranged attack can be used to activate levers from a distance, meaning that it can be necessary to go back to this lower lifeform to access new areas. As a result, being injured does not feel punishing, as each stage of evolution has its own uses. However, I felt like the second form, able to ram, wasn’t as interesting as the other two, and I only used it for the artificial motive of obstacles to push. Another neat system is the possibility to drop a package of flesh and lose healthpoints to switch to a lower lifeform, before later eating the package… or people… to put on some weight again. 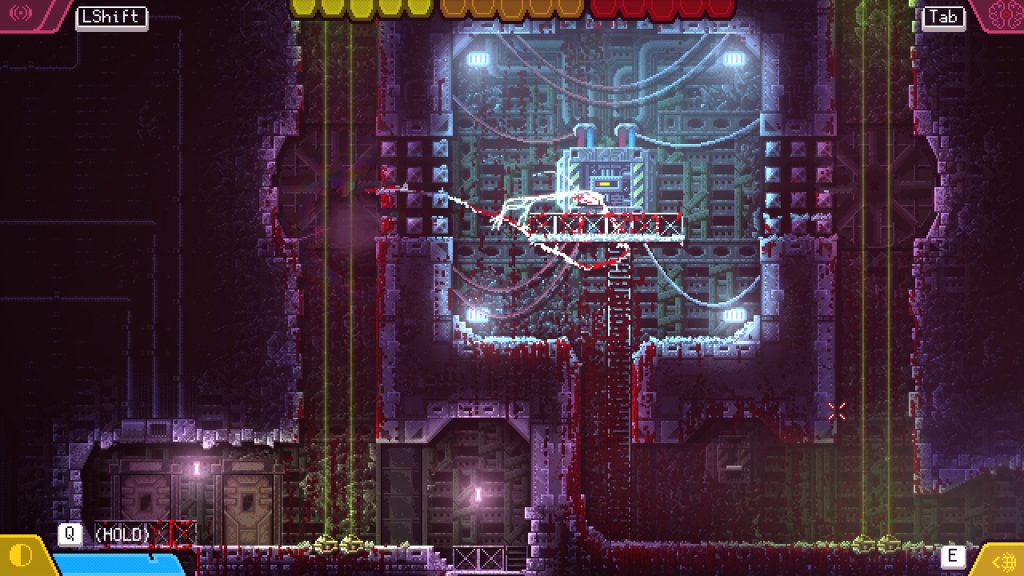 These three forms not only have different attacks, but they are also complementary to solve puzzles, as the game is ripe with them. Sadly, most of the puzzles consist in activating switches, which feels very dated in an otherwise very novel game. There are also other more interesting puzzles, such as using invisibility to sneak past lasers or using a reinforced skin to carry explosives and survive, but overall there is simply too much pushing obstacles and turning switches on and off to unlock doors. 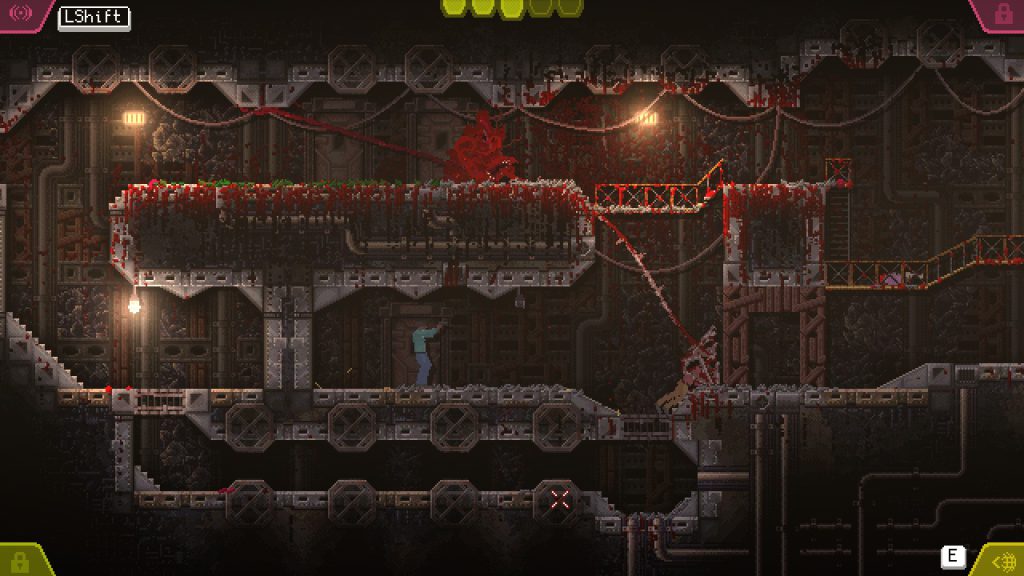 The possession ability is earned relatively quickly and allows to control live humans… or their corpses, like a sick master of puppets. This can be used to impersonate humans during fights and use their tools of destruction against themselves, or to solve puzzles by unlocking switches that were unreachable through natural means. More could have been done in terms of interactive scenes and horror, but it was well done as it is, and great fun to use. 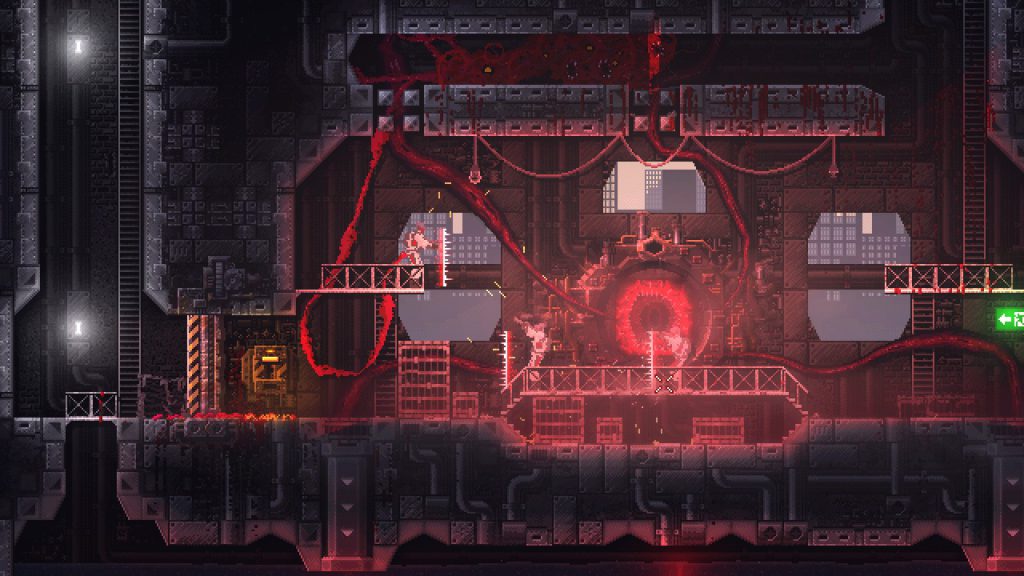 The real star of Carrion’s show was the feel of moving around. The monster does not have legs, instead it is a mass of flesh supported by tentacles. And yet, despite the otherworldly physicality of the beast, the controls are surprisingly intuitive and responsive. It is as if the game is so good at guessing what the player wants to do, and the result is so smooth, that there is no friction to remind us of the considerable effort that the developers achieved with the navigational abilities. If you play this on a computer, although a gamepad is fine, I recommend the mouse a lot more. It is an absolute joy to control. And as the monster grows, you can organically feel the drag of your body and compensate without realizing; the result is simply amazing and shows how a 2D game can still feel fresh and novel in 2020. Left-mouse feels like dragging a lightning-quick creature in that direction as tentacles sprout from the amorphous flesh and cling to walls like a nightmarish Spider-man, ignoring convential platforms and sticking to the ceiling, while right-mouse grows tentacles to grab and interact with objects or people, responding perfectly to each of your moves. It is a thing of beauty. 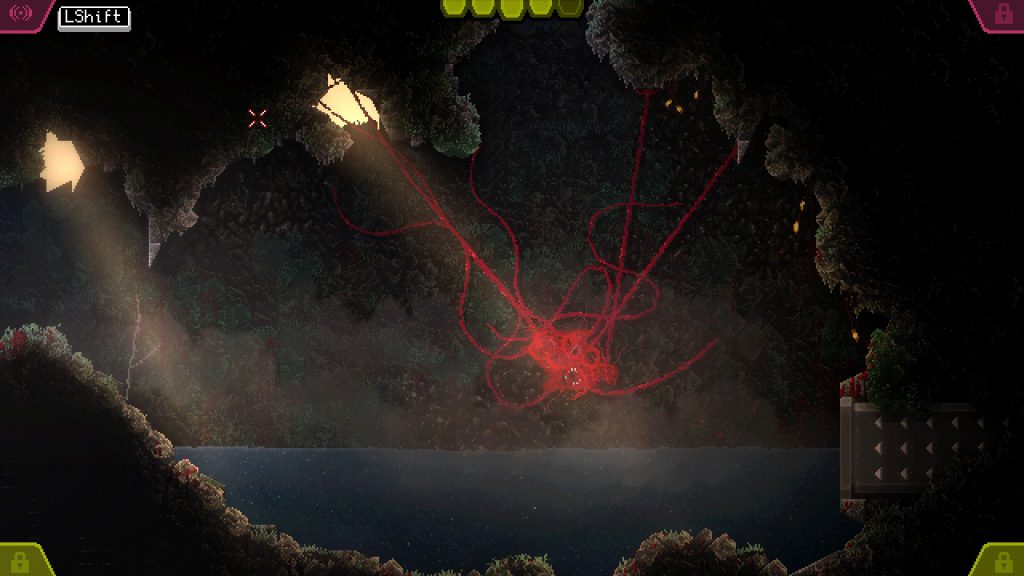 Short as a Gremlin

Carrion is a short game that can be completed in four hours, add to that one or two more hours either if you get lost or if you want to complete the game at 100%. While I personally prefer short experiences before games overstay their welcome, some players might want to know this information before a purchase, especially as Carrion is priced slightly higher than many other indie games at 20 € / $20. To be honest, albeit short it must have been a headache to ensure that all puzzles could be solved when players walk around in different forms, while avoiding that they get themselves trapped with no way out due to the lack of a specific ability. And I wouldn’t have wanted to see another hour of turning switches to watch doors open or close. To me, four hours was a perfect length for what Carrion proposes. 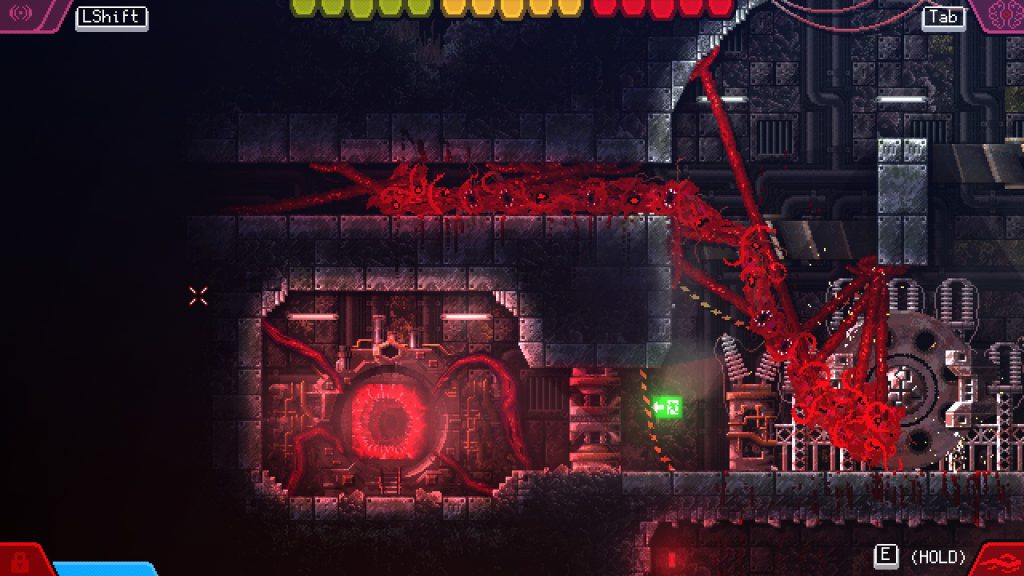 Carrion is a vicious reverse horror game that is also an absolute joy to control, showing that 2D “platformers” can still be innovative and feel fresh several decades after their introduction. However, you won’t simply find here a quick burst of tentacled violence, there are also many puzzles to wet your appetite in-between massacres. While some are interesting, at times it becomes tiring to pull switch after switch to open the next door and the next, especially considering that the Metroidvania component of the game is its weakest element. There are excellent original ingredients in here, that I would have liked to see… more fleshed-out. Nonetheless, Carrion feels amazing and it is a treat for science-fiction horror lovers.