A great entry to an arguably overcrowded genre.

I’ll start by mentioning (every chance I get) that I absolutely love roguelites/roguelikes and UnderMine is another enjoyable experience I’ll add to my list – I’m even arguing one of my favorites of the genre, that still has Binding of Isaac on the very top. While UnderMine takes some great ideas from the mentioned Binding of Isaac, it still feels very different from it, while at the same time having a familiar feel attached to it. A blend of melee and ranged combat in a dungeon-crawler-esque experience that I cannot recommend enough at the current price, a very polished and replayable experience for fans of the “rogue” genre. 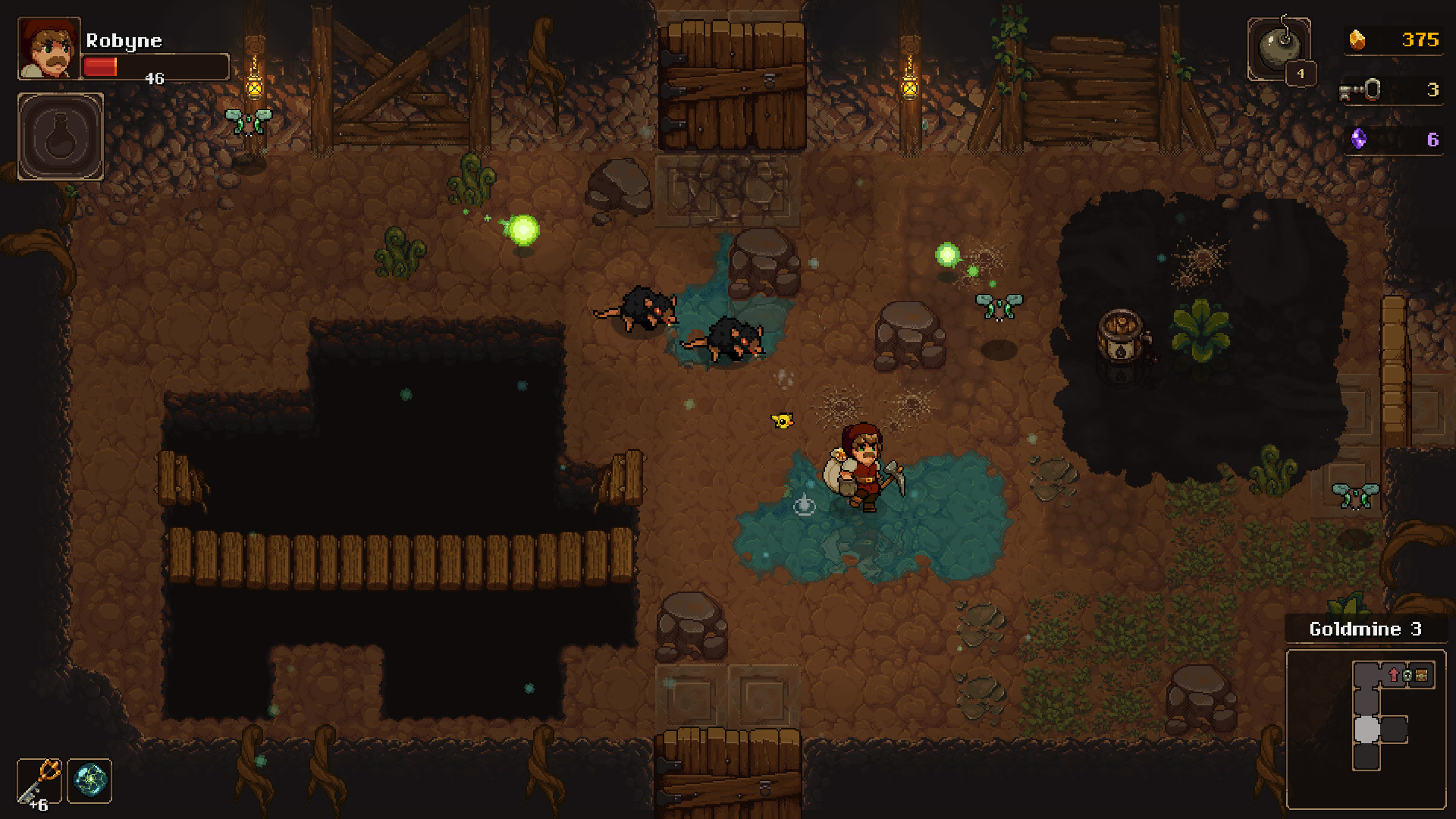 UnderMine starts with an already interesting premise – you are a peasant!

Anyway, the Peasant is a character that goes in the UnderMine and must try to figure out the source of odd earthquakes happening in the mines. This is but a mere first objective that will take you quite a bit to complete, only to open the game in terms of lore and story far more, as well as expanding the gameplay massively.

Why are you a Peasant? Well, you gotta work! When dropping into the mine, you’ll be accompanied by a follower/pet that starts as a little bird. Upon dying (trust me, you’ll get wiped really fast in this game) your artifacts and a partial amount of gold are preserved so that the NEXT Peasant can take that artifacts, gold and pet and you can restart your run.

So instead of “restarting”, your character changes every run! Male or Female, skin color, presence or absence of a moustache (always a big deal) and so on are constantly randomized for the next peasant you will play as – there’s a name for every peasant too! Mind you, should you be unhappy with the look of the Peasant, you can always change it in the Mirror, conveniently placed in the Hub.

The Hub is not only where you can change your looks but also interact with characters (some that you will unlock the further you play) and buy permanent upgrades for your Peasant (and future Peasants!) such as more pickaxe swing damage, throw damage, more health, carry more potions, etc.
You can also buy items or craft relics (which work as “perks” or the items in Binding of Isaac giving you an edge during your entire next run) in the hub, at the cost of gold and the more rare Thorium (*looks at the developer’s name*), respectively. 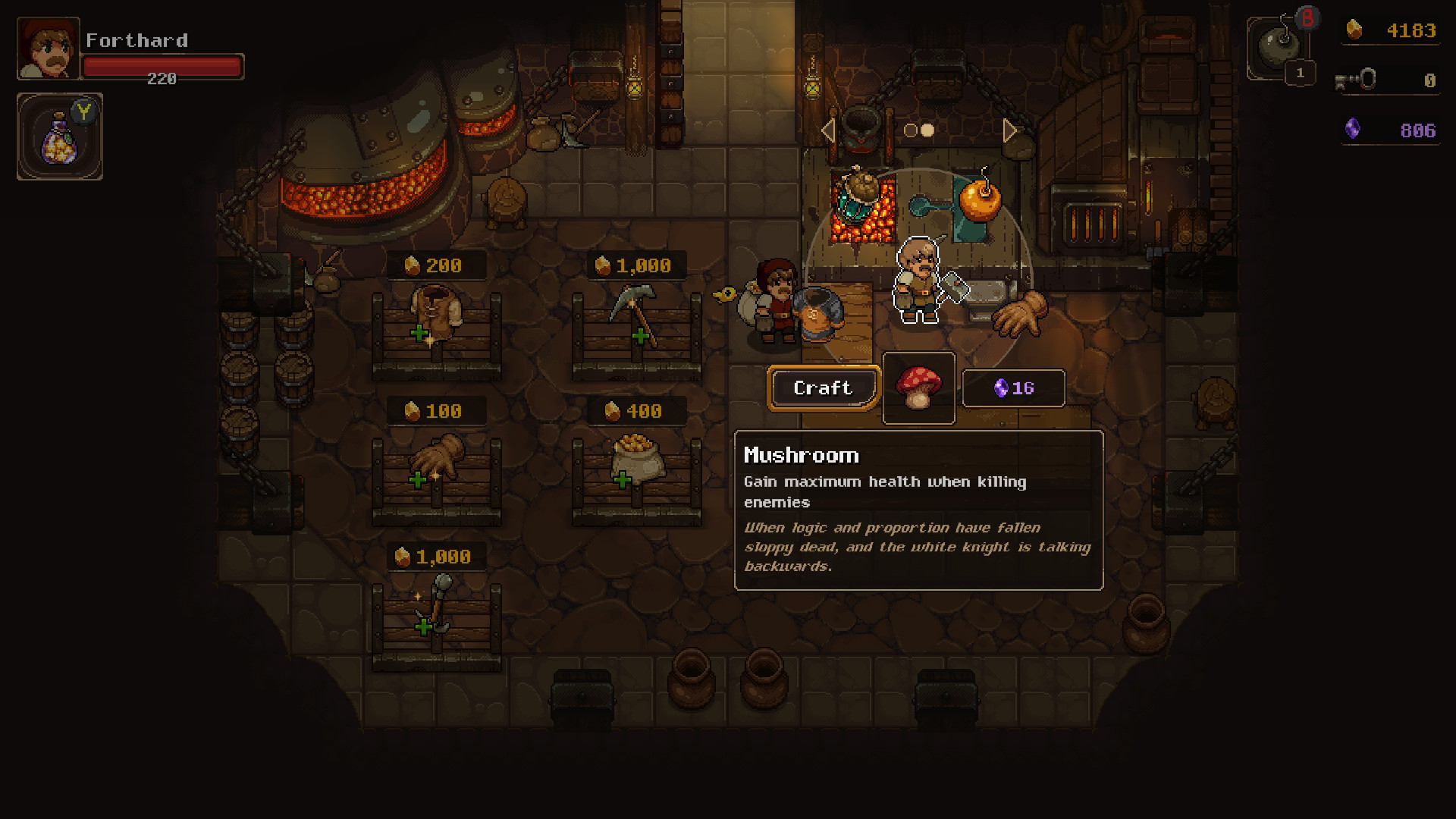 Once you’re done preparing, jump down and off you go! If you’ve played Binding of Isaac, UnderMine will feel right at home once you start your run – you’ll have a few levels of a certain environment (starting with the mine, then moving on to a dungeon and so on…) that have relic rooms, sacrifice rooms, a lot of combat and a shop and so on and so forth; it’s all randomly generated, from enemy types and placement to level structure, breakable items, loot, items, and even events!

Events work like quests. One example you’ll encounter fairly early is a guy looking for mushrooms, which you then have to search for – how or what is entirely a mystery except the first one so better be creative when playing. After you collect all the mushrooms (categorized as artifacts this game), the quest giver will appear soon after and reward you with new mechanics and items (won’t spoil, sorry).

I mentioned artifacts earlier, so what are they? Artifacts are permanent items that progress events/quests or the story/game itself. For example, to progress from the mines to the dungeon you’ll need a dungeon key, which is an artifact. Your pet carries all artifacts to any future Peasants you play as if you died with the current one so you don’t have to repeat quest steps or, more disappointingly, bosses.

Yes, bosses are not repeatable, which is an odd design choice I’m not entirely on board with. You can respawn bosses using Ascension which works as a mix of New Game + and Hardmode from Terraria – the game gets harder, especially the bosses, and you’ll get a much tougher time from the get-go. 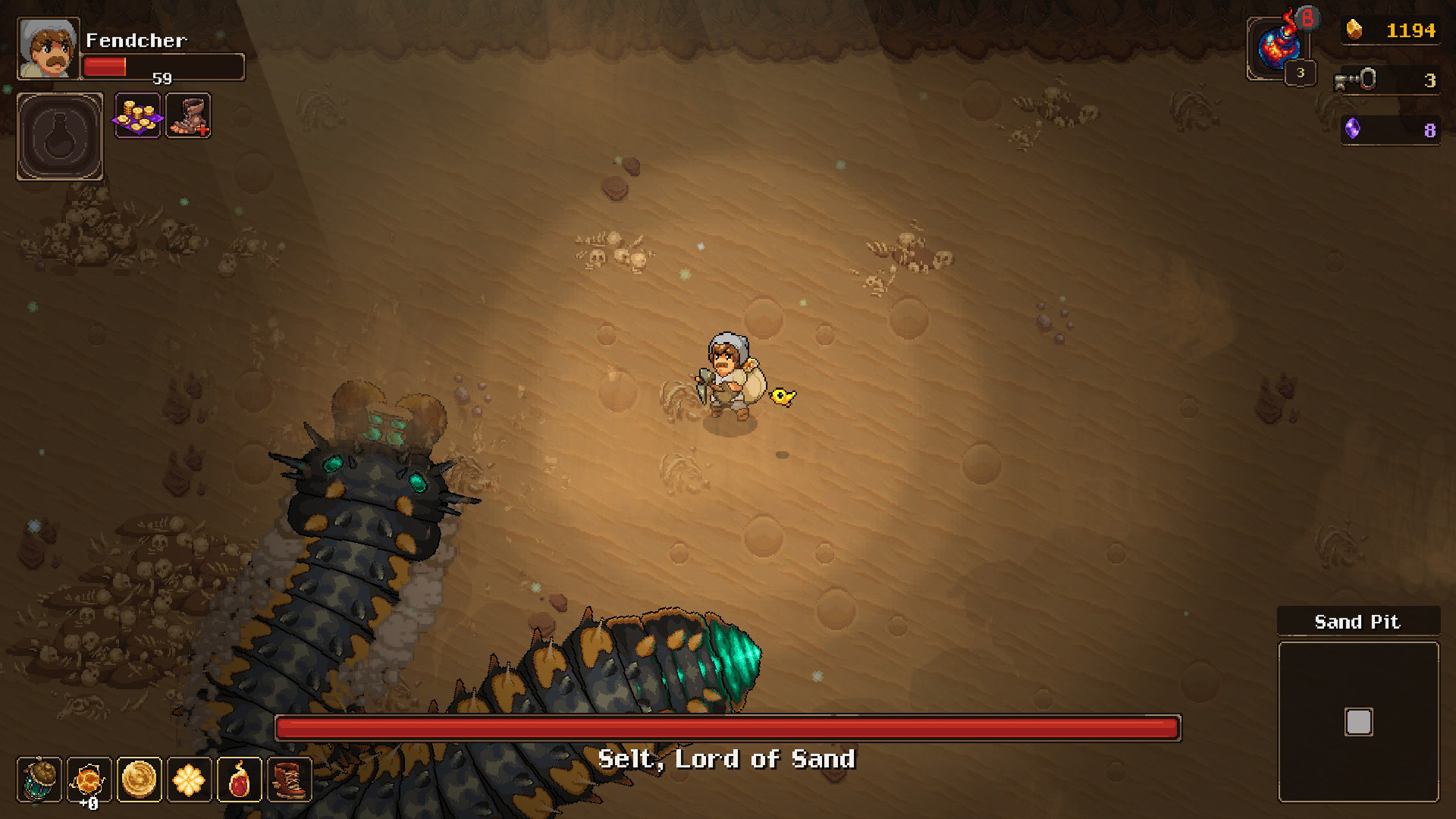 After all this description of the game, how does it feel/play? Great! Seriously, the combat feels really solid, mixing melee and ranged combat nicely depending on the encounters and the relics you pick up (slow heavy hitting builds can get quite ridiculous damage numbers for example, I really enjoyed attempting those builds), which allows for you to change your playstyle every run which, paired with the randomized nature of everything in the game, really enhances the replayability of the game. On top of ALL this you still have the meta-progression in the hub: upgrading your peasants permanently with the gold you collect while exploring is really satisfying and extends the playtime massively. I am not sure you can beat the game without any upgrades and relics (the game is ridiculously difficult so you’ll really want to invest gold in damage and health increases) but I’m sure some insane player will accomplish that soon enough…

A really solid soundtrack complements the gameplay and exploration which is further enhanced due to satisfying sounds when attacking/hitting enemies. The main menu theme, in particular, is a real treat to listen to and boss fight songs are great. Overall UnderMine has a really great sound design and quality.

As far as graphics are concerned, the game plays in a top-down sprite-based perspective. The graphics are pixelated but absolutely beautiful to look out and the animations are very fluid and match the combat greatly, making melee attacks feel meaty and responsive – the same goes to the ranged attacks (which consist of throwing your pickaxe). 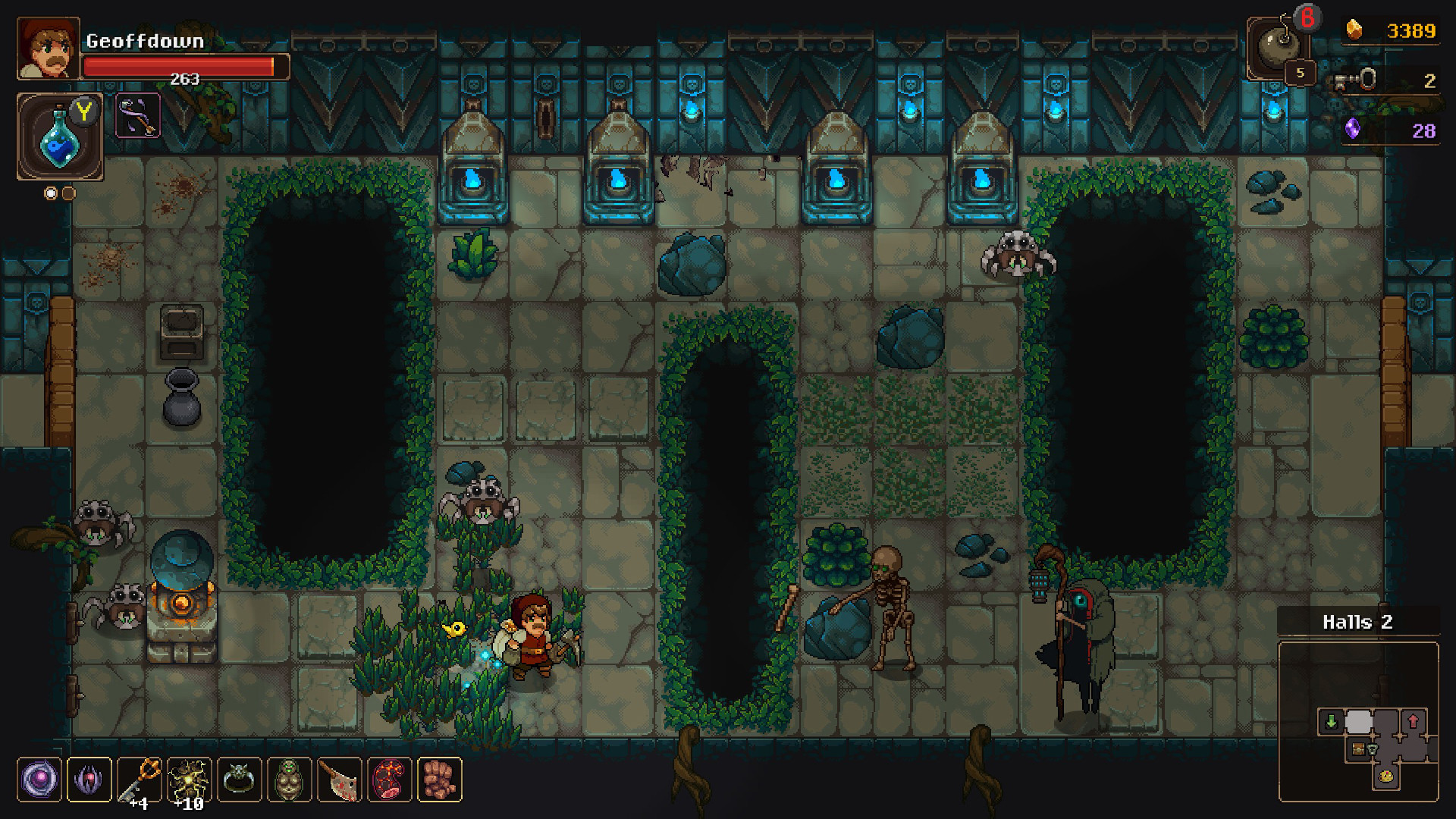 Another thing I must mention is the attention to detail – grass portions in the mine move when you walk over them and there can be oil spills which will light on fire should a flame drop on them or a bomb explode nearby: you can literally light entire rooms on fire with these elemental combinations (the same applies to water puddles and lightning). Enemies also react to these environments – oil blobs can catch fire and become fire blobs or purify when touching water – reckless enemies can fall off cliffs and so on. The attention to detail not only to the graphics themselves but animations and environmental interactions is a joy to look at and I can’t praise UnderMine enough for that.

UnderMine is releasing in August 6th and its current Early Access state is already evidenced enough of how fantastic the game is. One of the best in its genre, UnderMine is a great roguelike title I can’t recommend enough to fans of the genre in particular, especially at such an inviting price.