Instruction-less puzzle game within an ancient temple. Think of it like The Witness crossed with Sokoban. It does not measure up to either, unfortunately.

An Interesting Journey of Monsieur PAF is a block-pushing puzzle game like Sokoban, but grounded in an ancient temple rather than a level select screen. The game gives you no instructions whatsoever (beside the basic controller buttons), taking the approach of something like The Witness.

Unfortunately, from my (admittedly limited) experience, the game disappoints on both aspects – the puzzles were few and largely unrelated (not quite building up in complexity), sometimes tedious (one particular puzzle had me piling blocks
for more than 20 minutes – note, also that this is about the *execution* and not the planning; I had figured out the pattern to build a staircase, but the actual progress was slow and laborious); and the environmental setup of the puzzles lacks the polish that made The Witness work.

I’ve spent quite a long time in the game lost, but not in any particular puzzle. Instead, I either missed a path, or misunderstood an improperly setup game mechanic. In my view, this is precisely the opposite of what you want in a puzzle game! Being stuck in puzzles is totally fine – being stuck in the setup is not. 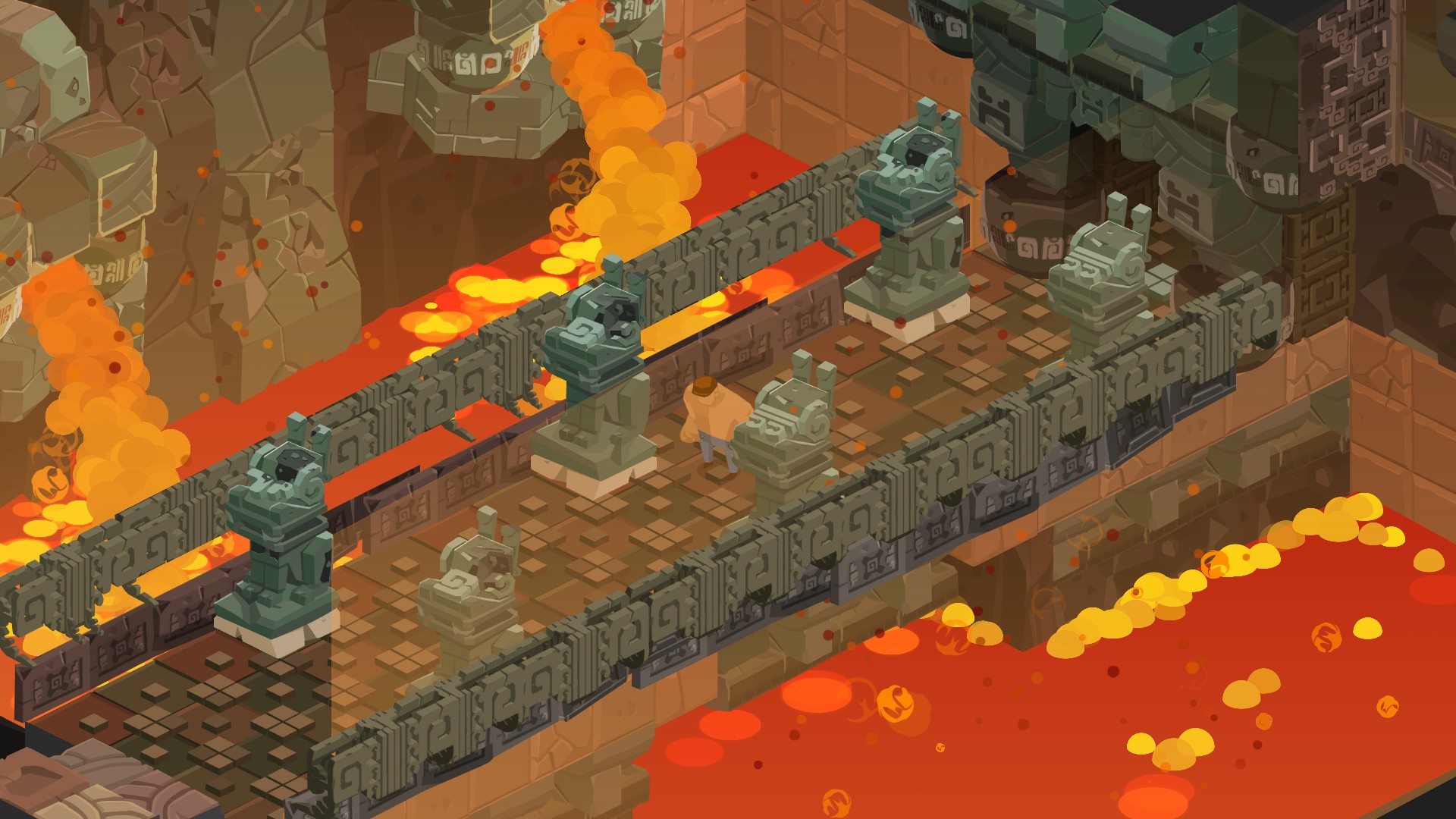 The game’s visuals are fairly flat, but I like the art style.

The problem is that the isometric perspective is terrible to communicate distance (both in depth and height). Plus, because the game is 3D, there are many vertical elements that obstruct the view. These are both issues that hinder the puzzle aspect of the game.

I have often been confused about which objects I can push or lift, and which ground tiles act as a push “stop” and which don’t (sometimes the color gives it away, sometimes it doesn’t).

So, all in all, while the game can look pretty at times, it won’t blow you away, and is a source of problems to the gameplay. 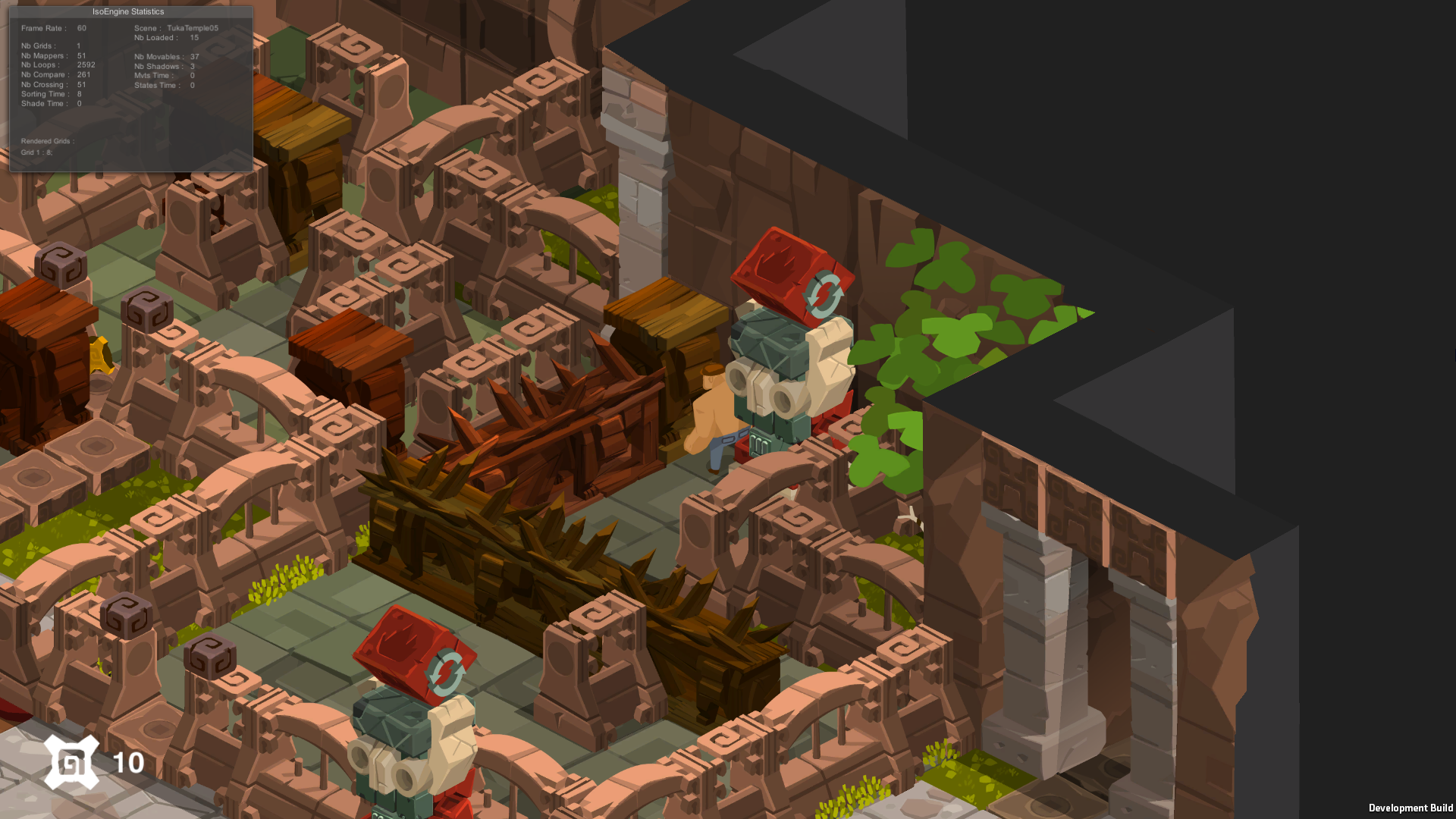 The basic mechanics are pushing, lifting, throwing, punching, and jumping. Puzzles are self-contained in their room, though sometimes you need to move blocks between rooms (and thus puzzles).

The puzzles themselves are fairly straightforward, but they often have an extra collectible for those willing to go the extra mile. I actually liked the puzzles. Each puzzle was fairly unique, and didn’t relate much to the others, but the extra collectibles made for a kind of “multi-puzzle” per room, and they required a different kind of insight to solve, so that was great!

The problem is mostly in how some puzzles require you to bring a certain block, platform, or power-up from a different room. The need for blocks is kind of unpredictable and inconsistent. As I said, I’ve often been stuck “between” puzzles. And this is the reason – if you can’t solve a puzzle, you can’t really be sure whether you must bring a block from a different room, if you need an additional power-up (I’ve only encountered one power-up in the game, but I don’t know if there are more), or if I’ve missed something else entirely. This is a big problem, to me. The result is that you spend way too long walking around between rooms in search for the “potential” solution. Sometimes it is correct, sometimes it is not.

Puzzles aren’t clean, in this sense – to me this isn’t good puzzle design, but perhaps there is a niche for it. 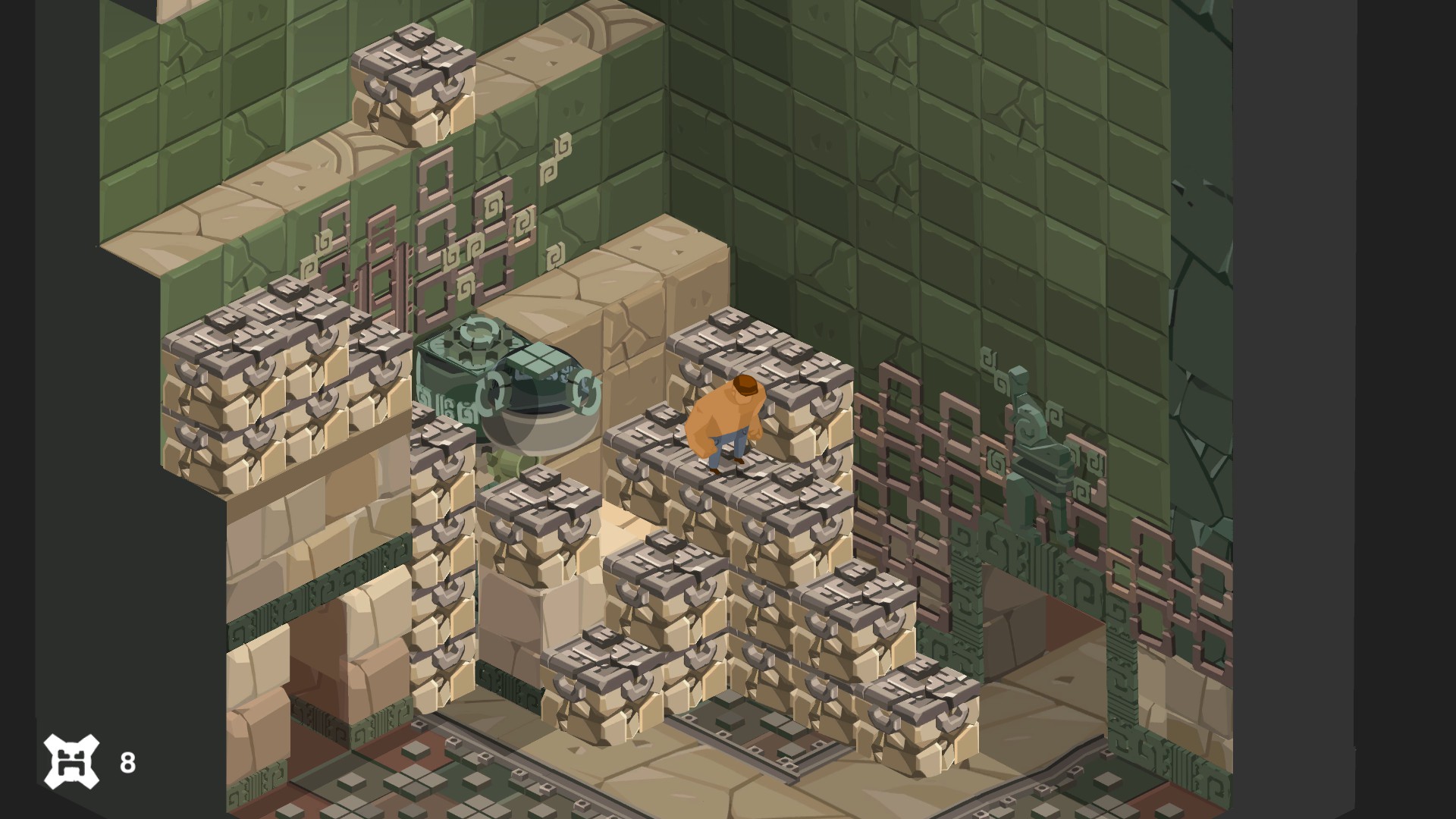 Outside the puzzles themselves, you are in a 3D temple, with occasional gates that you can only by solving a puzzle, or by collecting certain “tokens” in their respective area.

The problem here is that there is no map (and drawing your own is neither encouraged nor easy given that the world it’s not a simple 2D plane). This means you can’t mark rooms of interest (maybe an unsolved puzzle, maybe an uncollected extra, maybe an object you can’t interact with on first visit, etc.) and you need to walk around aimlessly to look for missed paths if you’re ever stuck.

I thoroughly enjoyed The Witness, which had neither of these, but this game is much narrower. It’s full of bottlenecks that completely prevent you from progressing in another direction and come back to where you were stuck before. If you’re stuck, you’re stuck.

Another big problem is that traversal isn’t bypassed after you solve the puzzle. Which means that when you revisit areas, you can’t just go where you want to go – you’ll often have to take a round about way, push blocks and so on. This makes the whole “wandering about” much more tedious than it should be. 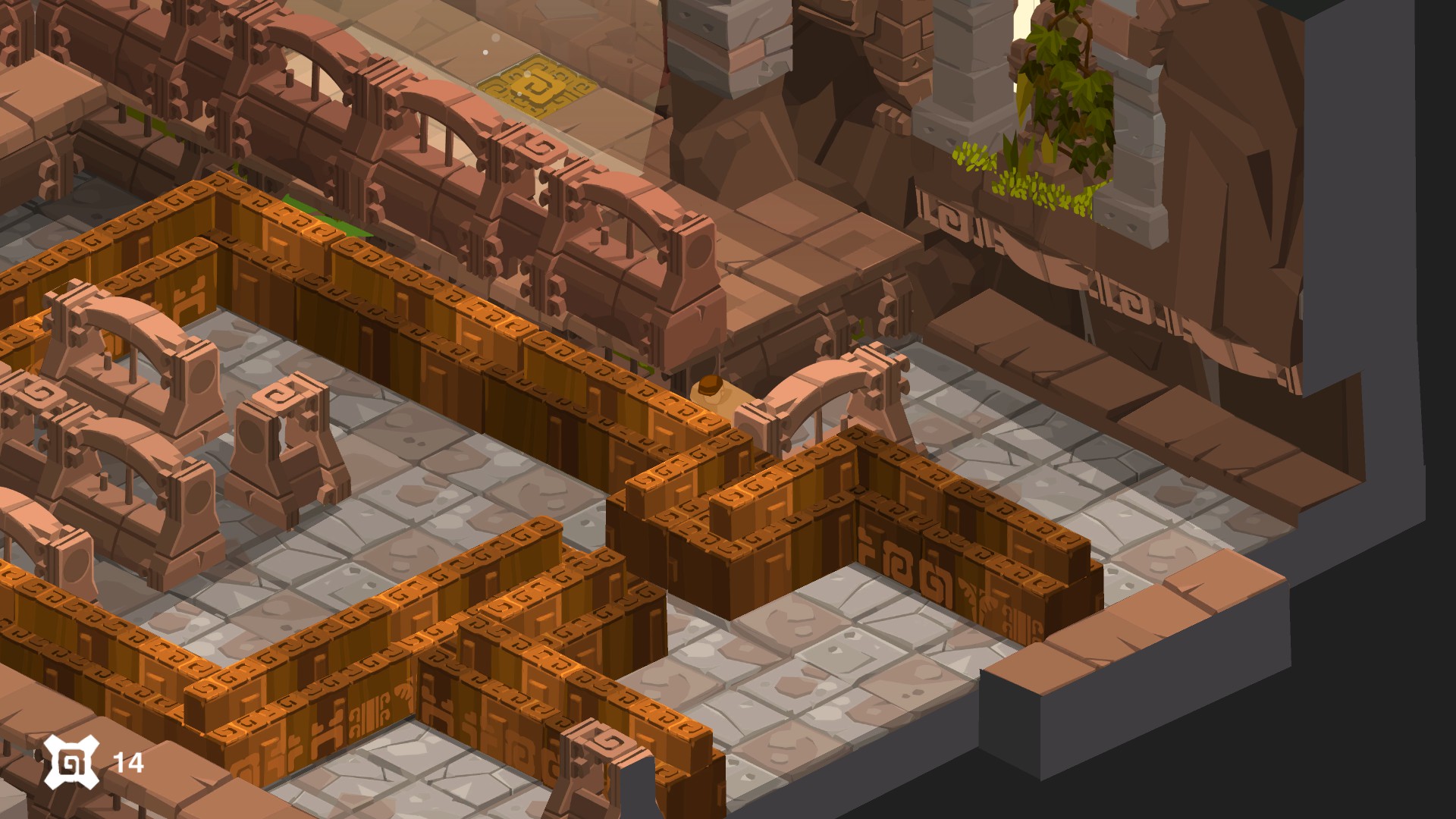 I haven’t played through the whole game – I estimated that I’ve completed 75% of the first area, and there’s a second area. Not sure if either the puzzles or the world get better after this point.

I like the ideas of the game. The concept is *good*. But I find the execution very lacking. Instruction-less puzzle games are great, but they much harder to make. They require a lot more context to work frictionlessly. With Mr. PAF, it seems that the developers ignored most of that context and hoped that the game would work regardless – well, I don’t think it really does.

Ultimately, it comes down to what I said in the beginning – I wasn’t stuck in any puzzle. It wasn’t like a chess problem where all the rules are clear. The whole time I was stuck by an unclear mechanic or cluttered level with poor visual communication. The time spent actually solving puzzles was also too sparse, given the huge amount of time spent walking around and rearranging areas repeatedly when passing through.

The game has some bugs, too, but that’s to be expected, and they’re being fixed before release.

If you really like puzzle games like The Witness, La Mulana, and Sokoban, maybe you’ll find something to enjoy, here. Maybe it gets better in the second half. I didn’t find it worthwhile to spend longer on.

Ultimately, I feel like the game is in the awkward spot between unique puzzles and instruction-less mechanics that don’t go well together (or at least don’t, here). The Witness had a huge amount of small puzzles intended to progressively teach you a certain mechanic. Afterwards it hit you with the tough puzzles for which you had full knowledge of the rules. The key point is that, when you came to a hard and original puzzle, you knew what the rules were. In Mr. PAF, you get an original (if not tough) puzzle without full comprehension of the rules.