I am a woman who loves card games. If a game is a massive, sweeping RPG with a compelling story and action-based combat, I will still find myself getting distracted if there is a card mini-game. As a child, I collected plenty of cards and participated in an awful lot of card battles, as well as playing poker with my father. A fascination for cards and statistics has persisted into my adulthood, which usually guides me to games like Dungeon Top.

Admittedly, despite passion, I am not that good at card games. When they come closer to statistics and math than outright luck and strategy, I often fare better. DungeonTop presented an intermittent challenge for me, and gave just enough variety and skill requirements to make me want to keep trying. 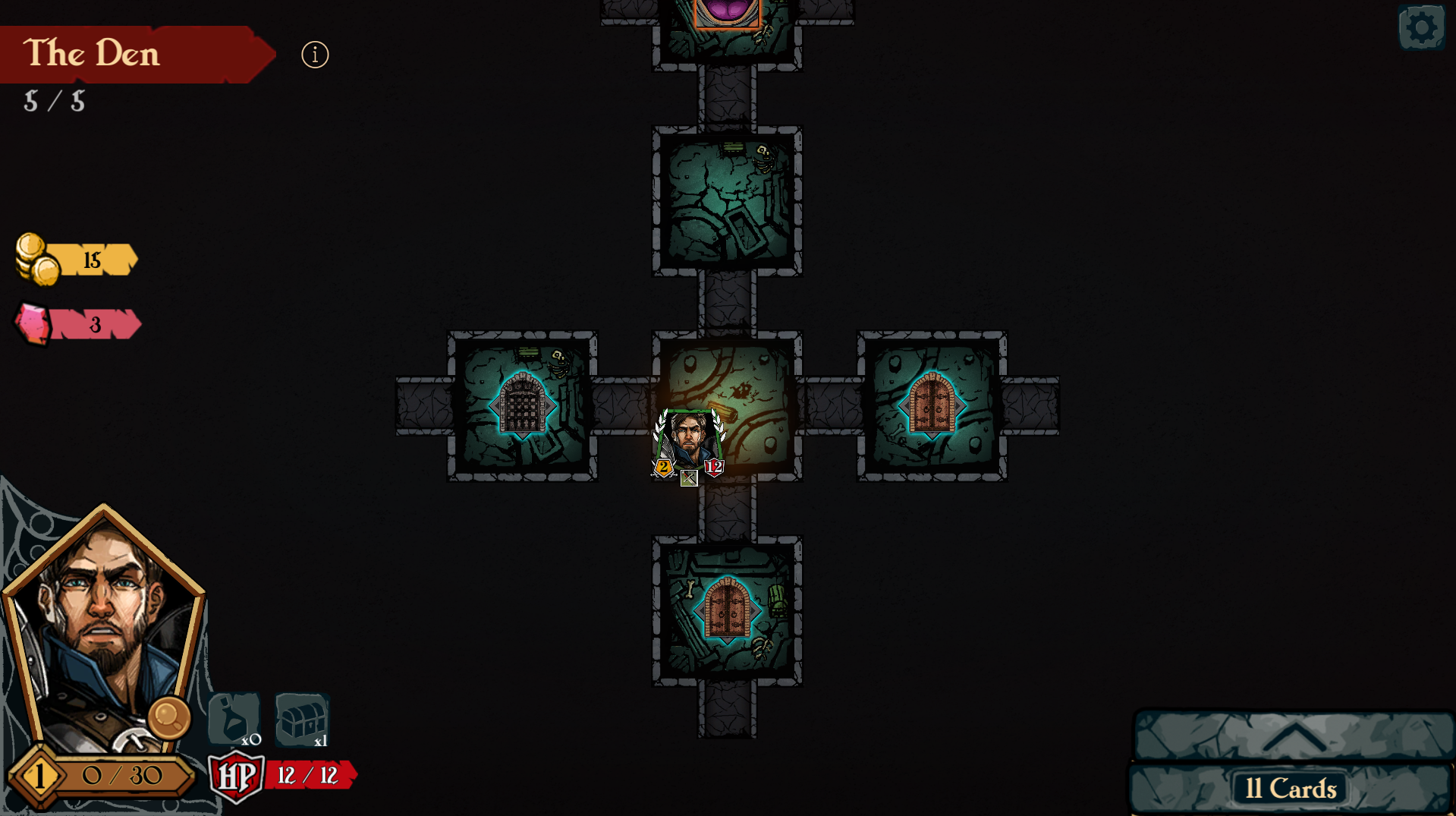 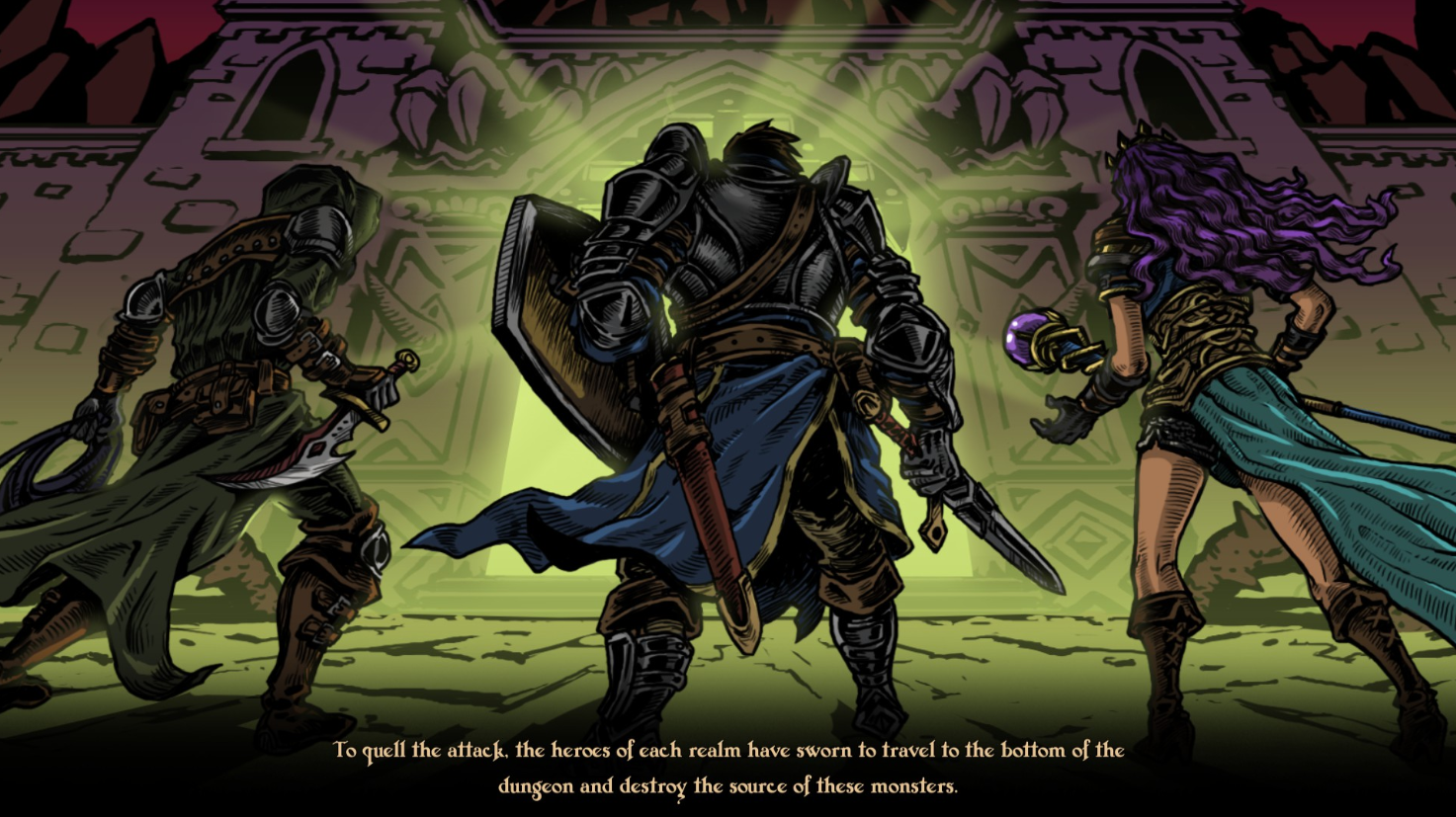 At the beginning of the game, you select and play as a hero. Long ago, there were legends of a place known as the Grand Forge. This was a city whose citizens were so adept at creating that they could bend the fabric of reality itself, using their skills to create whatever they wanted. The story begins three years after something called the Steel Curse has blighted civilization, causing black iron gates to crop up and manifest countless waves of monsters within the walls of major cities. The hero you select will gather an army (and minions and strange cards that do other things) and traverse the levels of the dungeons in an attempt to quell the monster attacks forever.

Really, its standard dungeon-diving fare, and I wasn’t tremendously interested in the story. More, I found myself wishing my efforts would pay off, and that I would defeat all of the monsters and prove lucky enough to do so. This, in turn, would push the Steel Curse back, or so I was lead to believe. 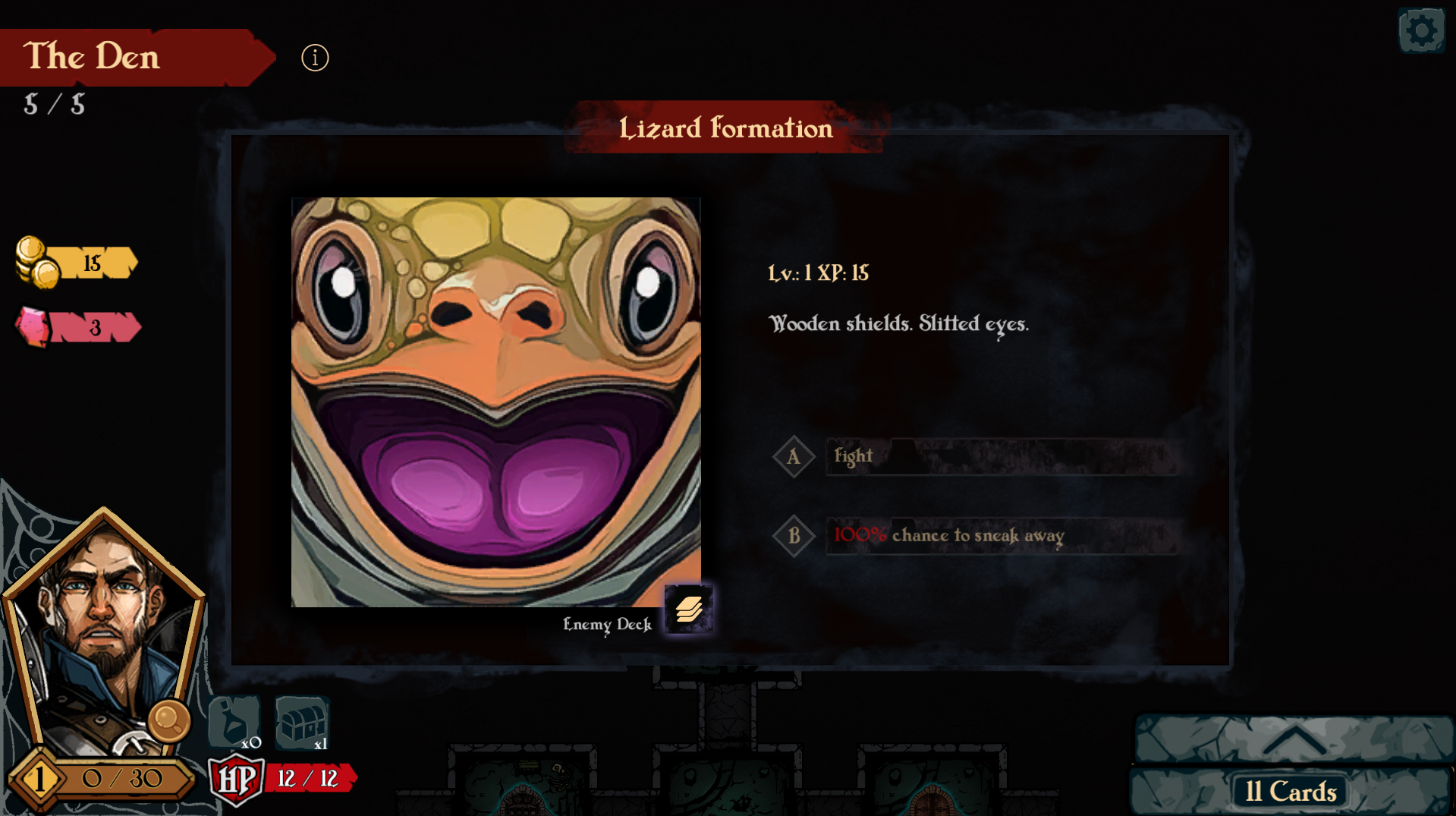 The graphics in DungeonTop are highly contrasted. Most of the art looks like it hopped off the pages of a comic book, with black lines to denote texture, motion, depth, and shadows. The colour lay in-between these lines, popping out against the lineart in a way comfortably familiar to me. As someone who grew up reading comics her entire life, the art style immediately popped. I loved looking at the different character and monster models, as well as the images in different random events. The illustrations on each card are different enough from each other that I came to associate the card and effect by face alone, and would often think of them by appearance before name.

Battles in DungeonTop are set out on a grid. For battles with basic enemies, the grid is usually smaller, though battles function mostly the same. You play as one of three hero options available- though only one is unlocked at the beginning- and work your way through enemy after enemy in an attempt to reach the lowest dungeon. Your first hero is the warrior. The mage and the rogue can be unlocked with gold later, which you must dungeon dive in order to retrieve. 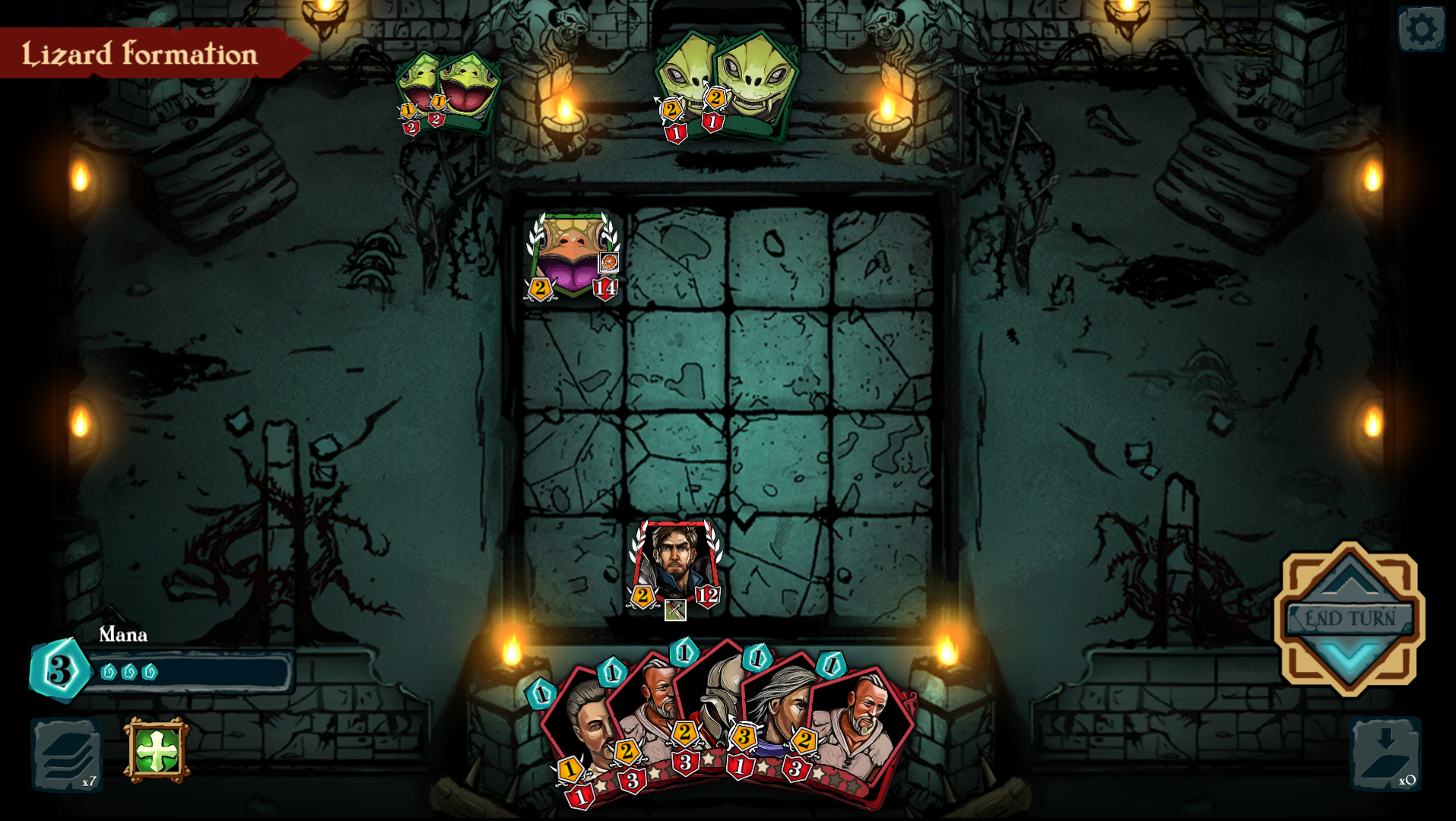 Personally, I found the tactical battle grid to be an improvement to roguelike card games in general. It combines what I enjoy about strategy games and adds the card component to it, as well as a mana portion that limits the amount of moves you can make per turn. More than once, I caught myself adding too many units and being punished for a lack of mobility or not thinking far enough ahead to ensure there was enough room for some of my more powerful units to get into position after enemies were summoned.

When it comes to boss battles, I did have a little difficulty until I got a good grip of my deck. DungeonTop has three allegiances for you to choose from, consisting of Guardians of Helm, Hand of Karim, and Tribes of the North. Each deck has cards that function a little bit differently, with multiple effects. Some cards you can lay down and they have a haste effect which allows them to move as soon as you play them. Others consume minions on the board to make themselves stronger, or grow in power each turn. Cards can be purchased by selling treasure cards while in the dungeon for money later, and this is also the method to unlock new heroes. 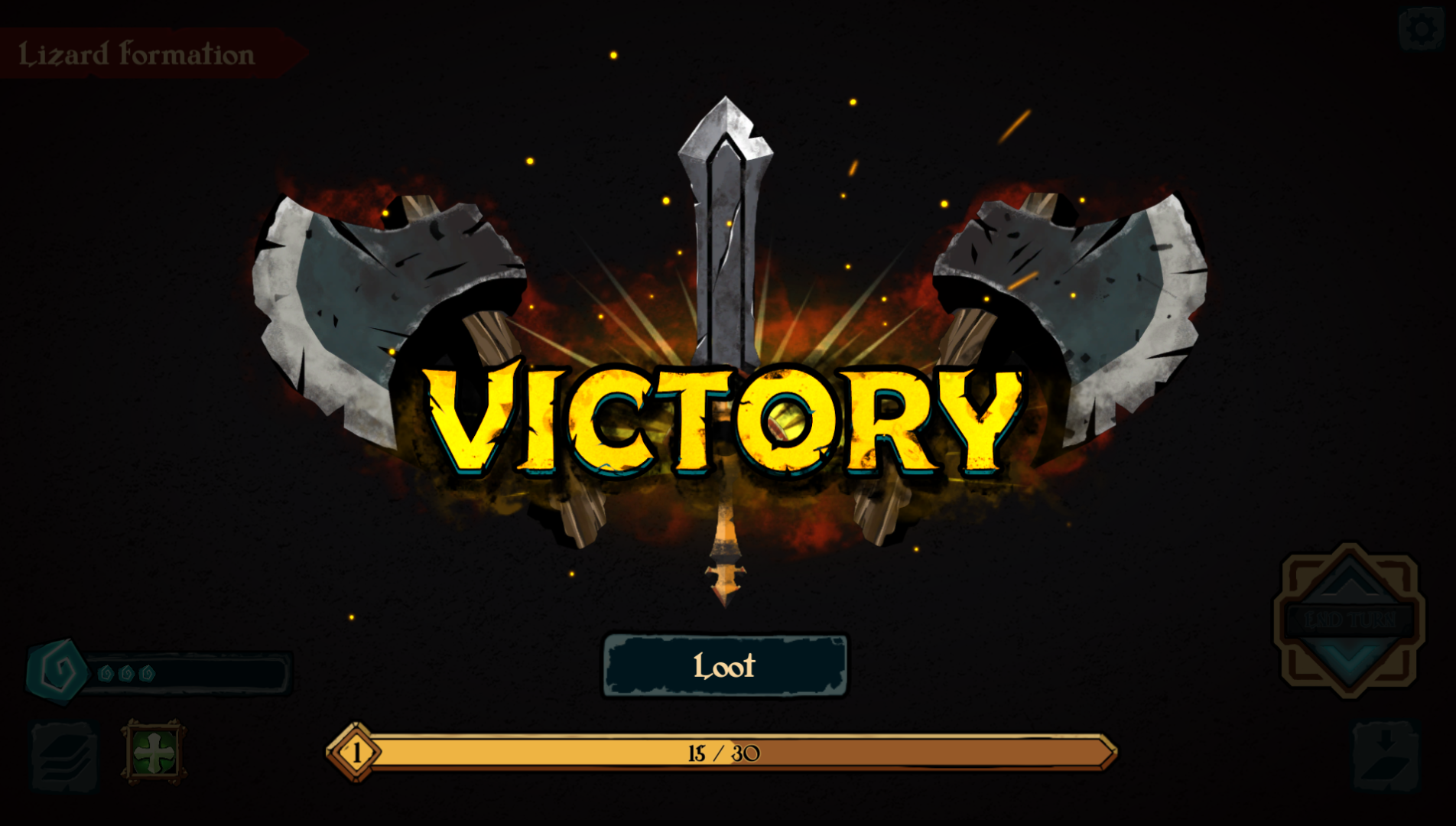 Despite occasional struggles with card games in general, I enjoyed my time with DungeonTop. I do wish there were other methods to unlock cards, and sometimes I found myself struggling with wanting to continue a run after one ended pre-emptively. Level-up perks being randomized upon leveling could also make things frustrating, but it did feel at times like it brought out my stubborn side. I wanted to dive back into the dungeon and win, if only to prove that I could kick that final boss in the face. In the event that you enjoy roguelikes and card games, I would recommend picking this up and giving it a whirl, so long as you’re comfortable with the unlock process.