I just can’t take any more!

Primordium – Day Zero has been in Early Access on Steam now for about seven months, starting out as Day Zero – Build, Craft, Survive, going silent for a few months, and then receiving a very large update recently with its name change.

I initially began this review back in February, I think, but the game was basically unplayable. I had UI issues that required alt-tab and killing the program to fix, crashes, and various other issues that caused me to give up on it then. Given that another update was due soon after, I waited for that before trying again.

Now that update has arrived, I’m not really sure what sort of game it’s trying to be anymore. It’s changed significantly from its survival-crafting roots and currently seems to be more of a quest-based shooter, but it could be that that’s all I’ve been able to see of the game. It’s still basically unplayable, you see.

The Steam store page for Primordium says it includes “a vast array of AAA quality models”. I’m afraid my first response was, “Where!?”

To be fair, there are some nice (and very shiny) models, but there are also some pretty terrible ones. And many of the models are used repeatedly with no or very few changes, making everything look very similar. The campaign even seems to reuse the same rooms multiple times, with others being large empty spaces that only seem to be there for the sake of it. 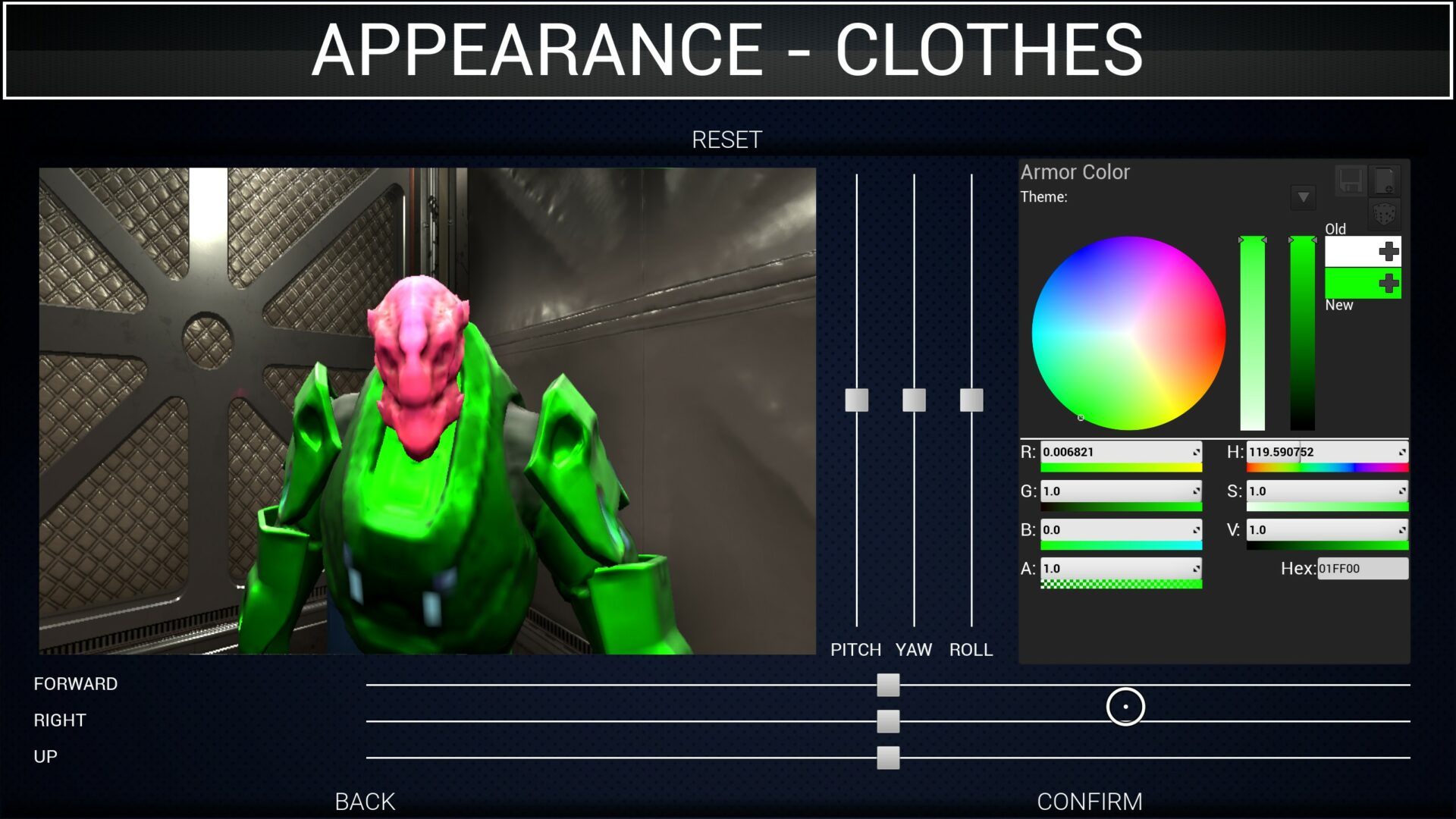 Characters all look basically the same, with differences appearing to be only in colouring. This is the case with the character creation section, too, which allows you to be only one model: a hideously ugly and blocky lizard-thing. But you can choose skin and armour colours, so I guess that’s something. Character animations are actually quite good for the most part, when taken in isolation, but when they’re placed in the world they cause clipping issues and slide across the terrain — particularly when rotating. The third-person view is very limited — a separately rotatable and zoomable camera would be much better.

Shadows are woeful, with your character’s shadow made up of multiple overlapping rectangles. The campaign’s “exterior” scene seems to have some sort of giant structure that appears to be obscured by its own rectangular shadow, too. 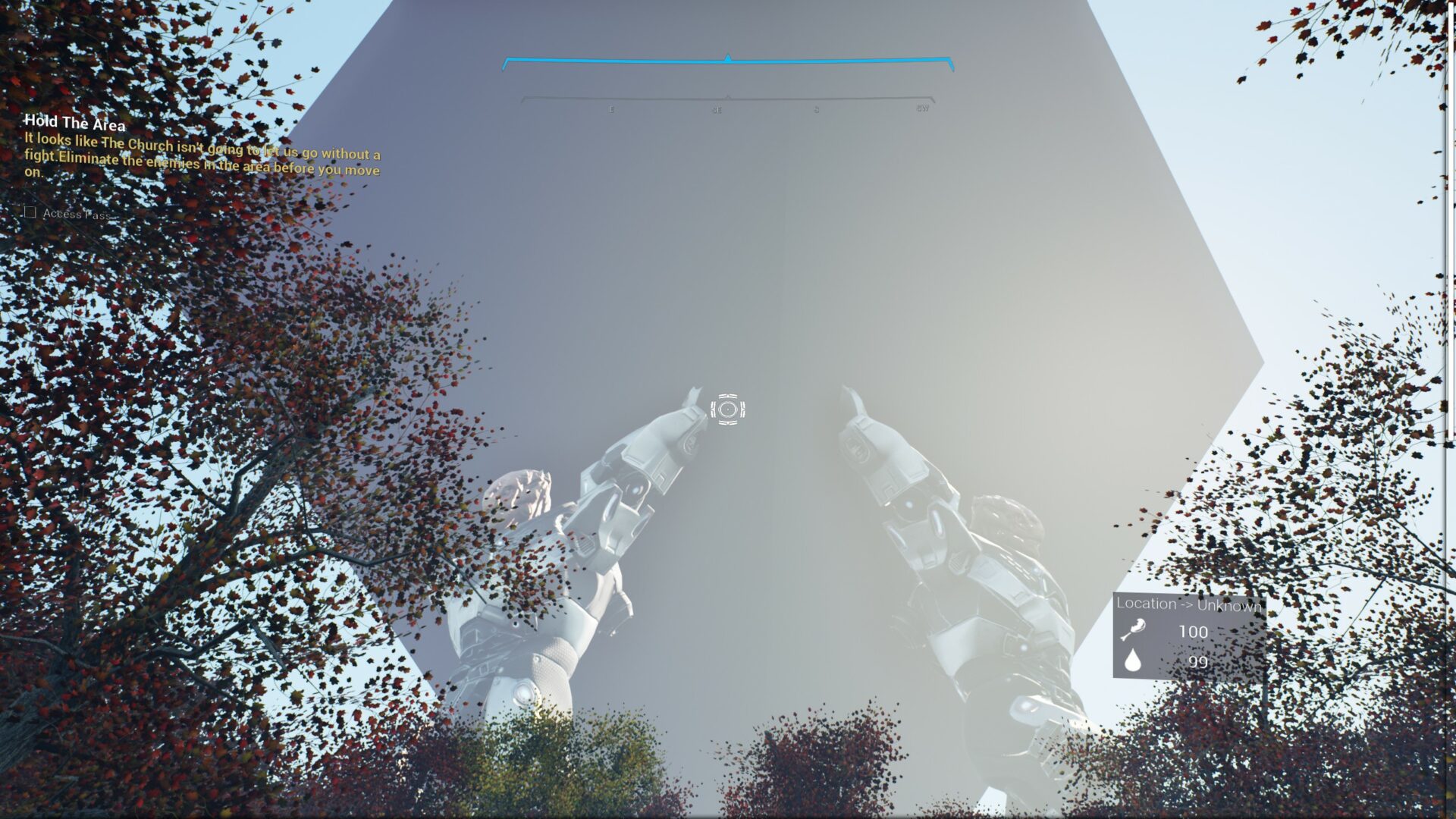 Performance is great on the campaign’s indoor levels, even in Ultra HD resolution with everything turned up to the maximum. Shift to the “exterior” scene, though, and — even when staying inside the tiny “tram” room — the game slows to a slideshow, even when dropping the resolution down to 1080p. There are some significant performance optimisations needed here, and it seems the game is trying to render everything on the level even when it’s out of view. Other significant lag when firing weapons may be due to special effects on the gun, or may be unrelated.

There’s a music track (maybe two?) that is quite nice in an ambient electronic sort of way, but sound effects are erratic and terrible. They appear to be limited to only one channel, as they frequently interrupt each other. The main character’s walking sound effect is particularly nasty. There are various scripted interactions that are fully voiced using some sort of text-to-speech engine. This is absolutely awful, with the emotionless voices turning the actually not-too-badly written script into some sort of deadpan comedy skit. These sequences would be MUCH better with written text instead.

The first thing I found, which I reported to the developer in the old version months ago, but which still remains, is that the game starts up Steam VR. I believe this is a simple Unreal Engine setting that needs to be toggled for the build. It’s not a deal-breaker, but it is annoying having to alt-tab to kill Steam VR every time the game starts.

The second thing that struck me was the extremely weird pink triangle that appears over most of the screen at various inconvenient times when trying to start a new game, or respawning. I have no idea what this is for. It stays there for quite a while (close to a minute sometimes) and then seems to go away of its own accord, or sometimes requires a click.

Other issues are numerous and frequent, and range from very minor annoyances and weird happenings to game-breakers. Here are some that I encountered: 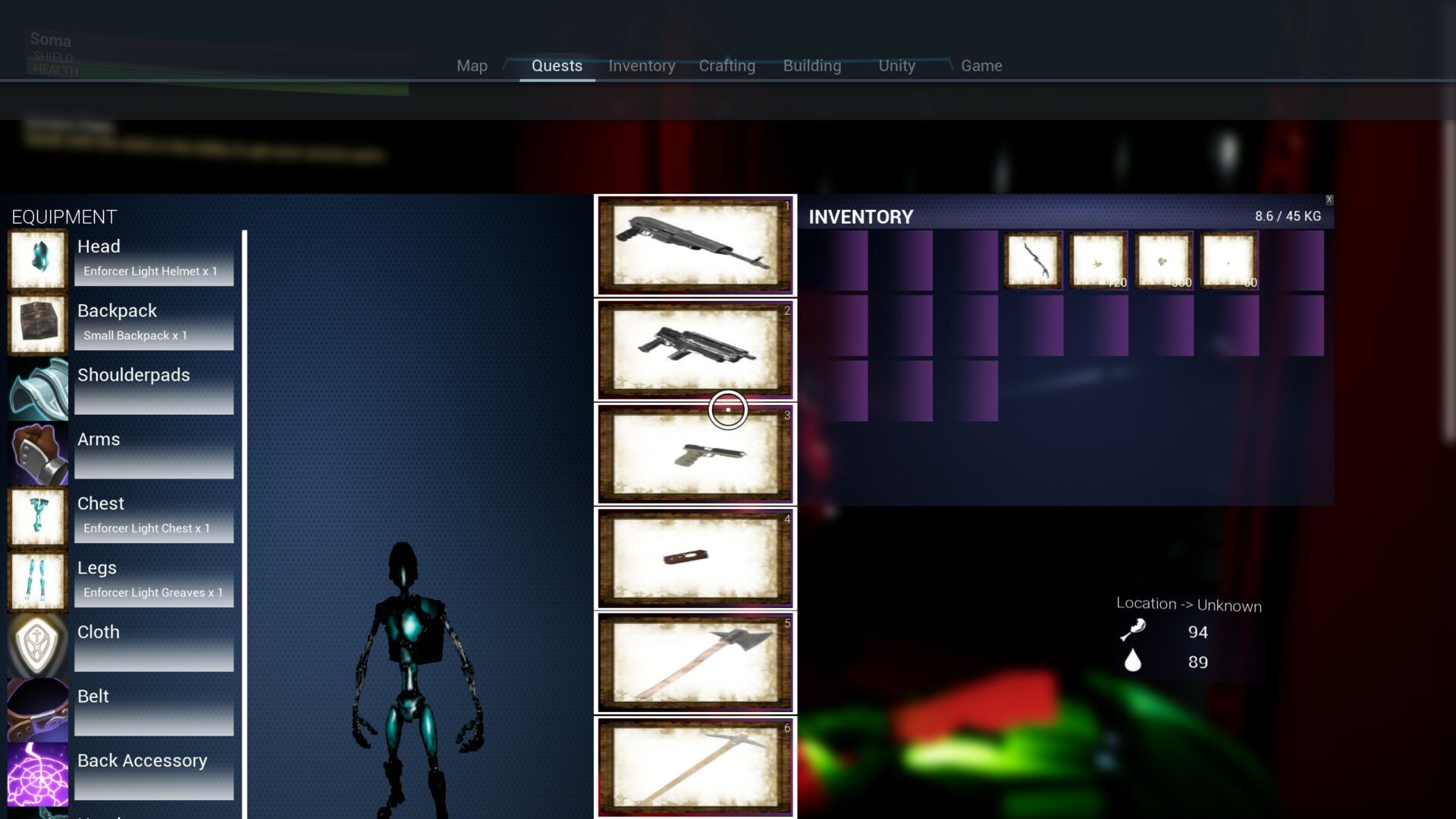 Primordium has multiple game modes, from which I’ve tried the Tutorial, a couple of Scenarios, and the Campaign. All are broken in different ways.

The tutorial places you in what looks like a big, almost-empty plain and describes some of the basic commands and interactions. I managed all of them eventually except standing up after going prone. Some of the key/button prompts are for a controller, even if you don’t have one connected. The stated key in the settings menu didn’t work, and holding down the key used to crouch didn’t properly work either. Accessing the trading computer in the tutorial gives you a lot of “text block”, which is a bit distracting. But at least I did get to see some very basic controls. I couldn’t quit, however, as the pause menu ran off the bottom of the screen, so I had to alt-tab and kill the program to go back to the main menu. I also had trouble interacting with some of the UI, as the tutorial overlay obstructed it.

I tried the campaign next, expecting this to be where I’d find the meat of the game. I described this in my review notes as “fucking weird”. Though it’s a bit abnormal for a review, I thought the best way to describe my first experience here would be to just include my notes, verbatim, so please excuse the lack of proper formatting and repetition of any issues that have been mentioned already.

While writing lists is generally poor review form, I think in this case it gives you a very good idea of how painful the current build of Primordium actually is to play: 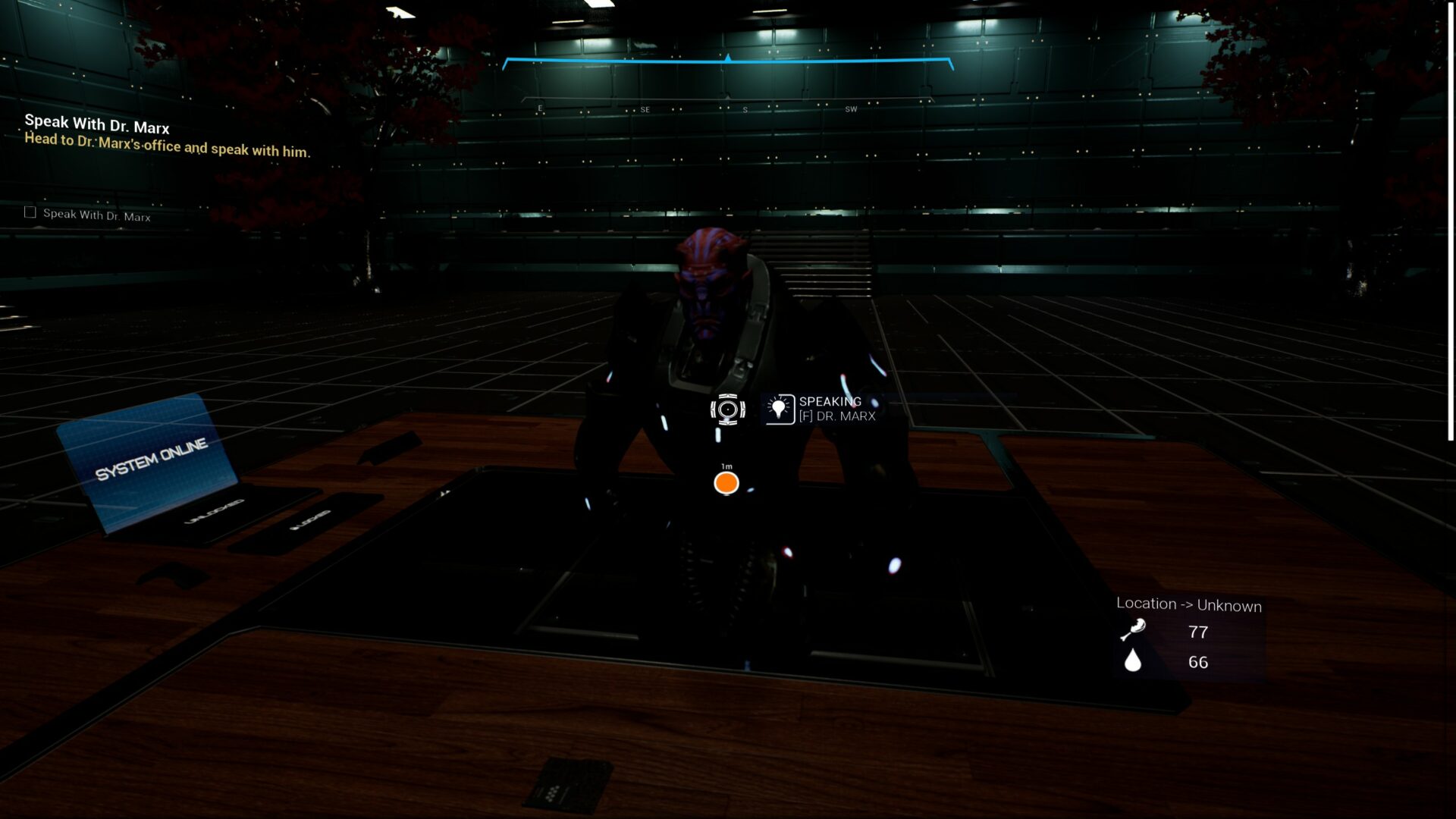 I also had these further thoughts from this experience:

As you can see, my main thought was “WTF?” and indeed I’m still wondering that now, after trying to play for another hour.

For my final go, I gave up on the rather unplayable campaign and tried one of the scenario missions. I’m afraid I can’t remember which one it was. This was at least a mercifully brief exercise in frustration.

First I was taken to the “Select a faction” screen. I don’t know what the factions were for, or whether each one was different in some way to the others, because I had a giant pink triangle obscuring my view. Again. 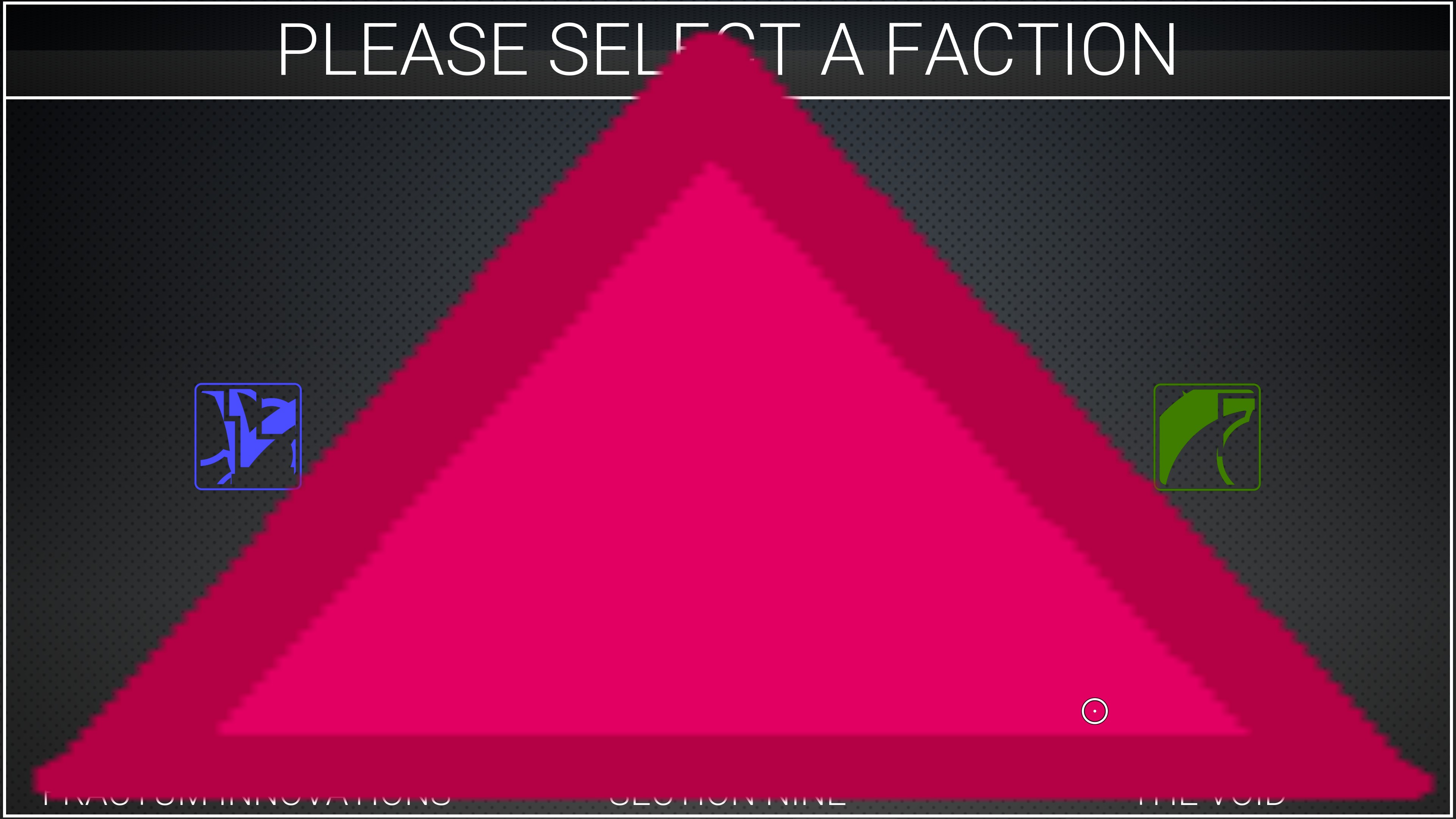 I somehow managed to select a faction, regardless, and the game then took me to a screen with a list of names. I don’t know what they represented, and they ran off the top of the screen so I couldn’t even see all of them, but at least there was no pink triangle. I picked one and continued.

The third setup screen was an equipment loadout. I didn’t even really notice what was here, other than that it seemed laid out better than the last screens and didn’t have a pink triangle. I just wanted to play! So I continued again. 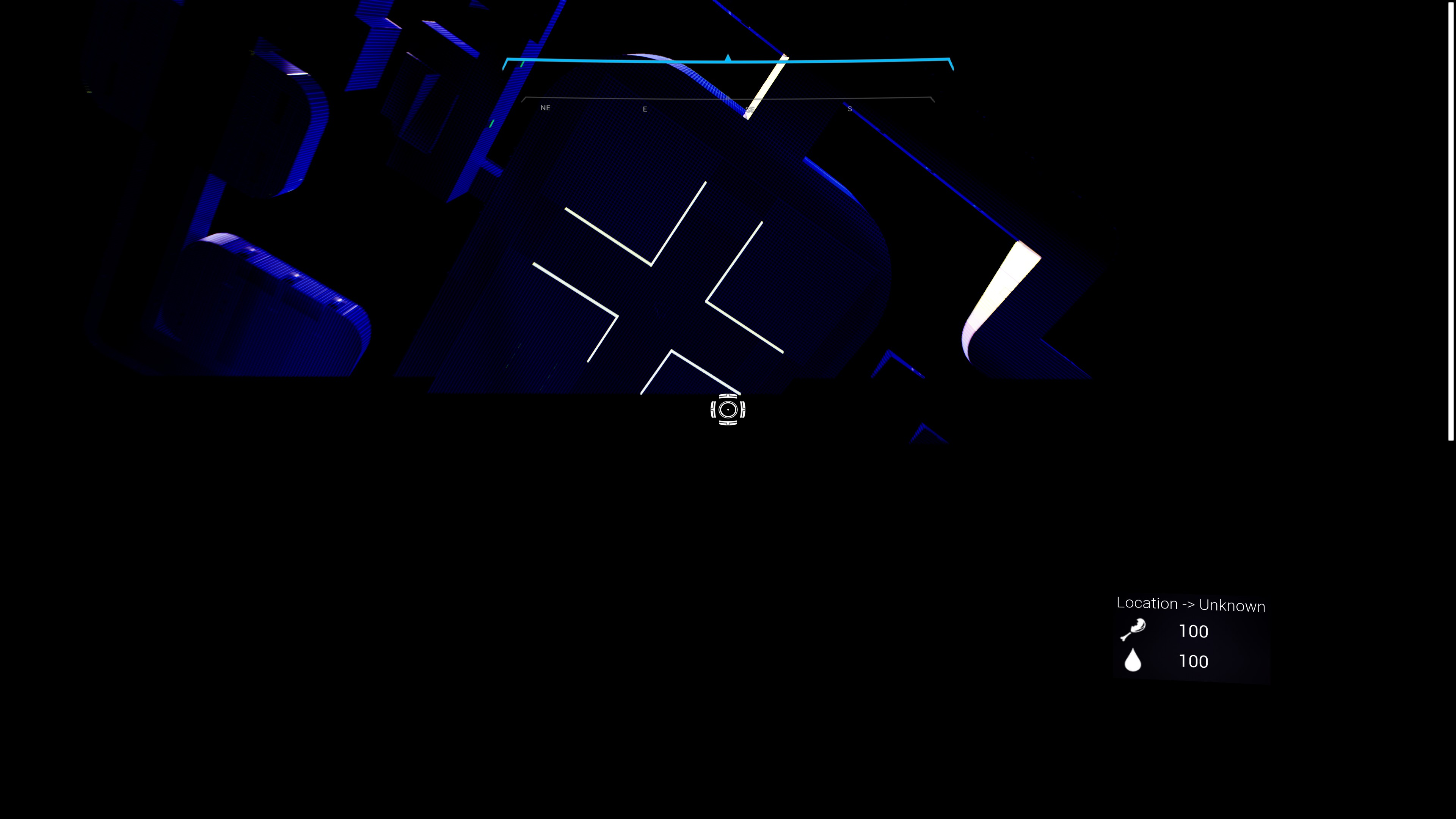 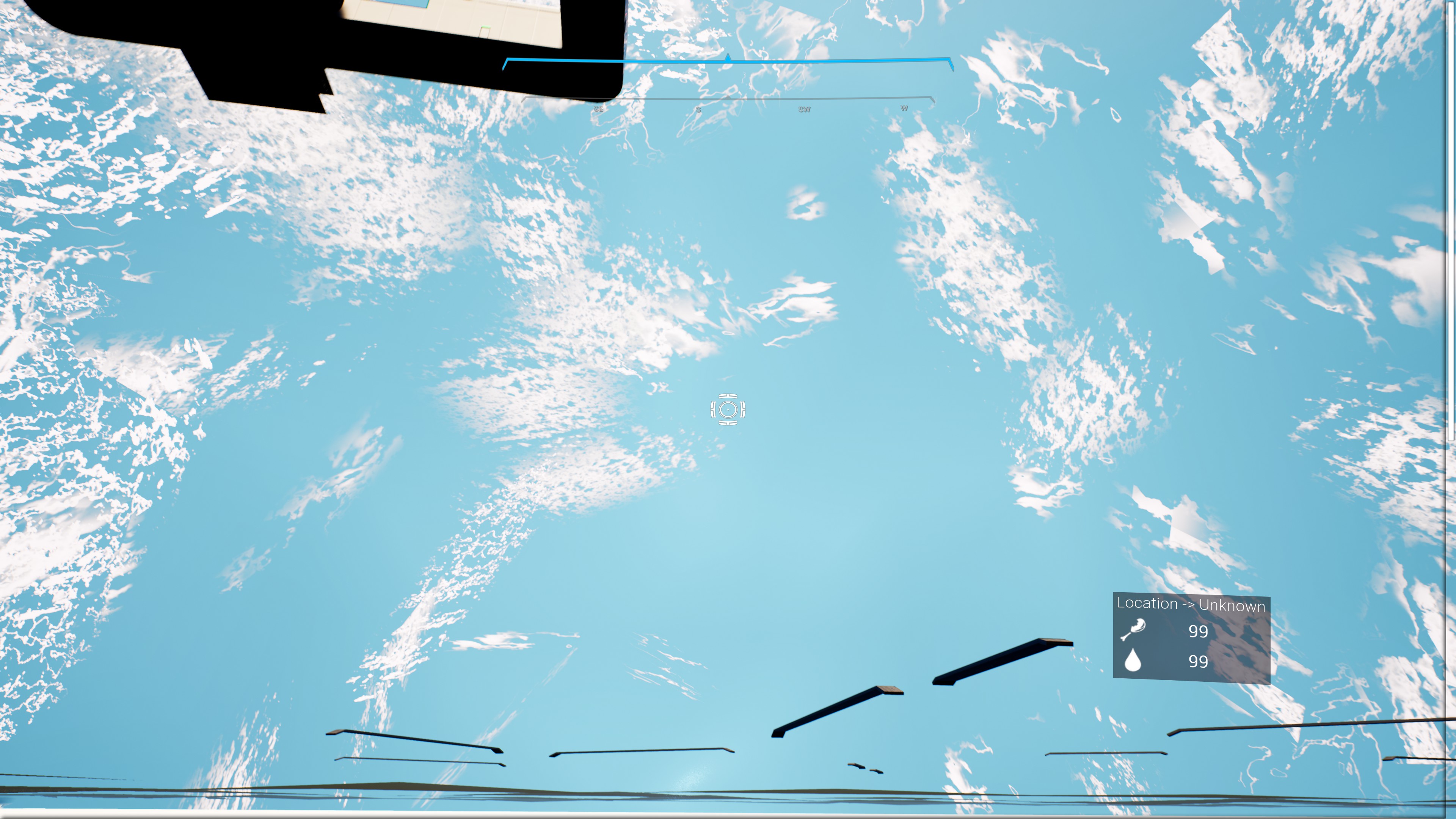 “Right, now we’re getting somewhere!” thought I, but I was sadly mistaken. Turning the view around I saw that the buildings I’d fallen through were floating a few metres above me, so I couldn’t even enter through the tantalisingly nearby doorway. 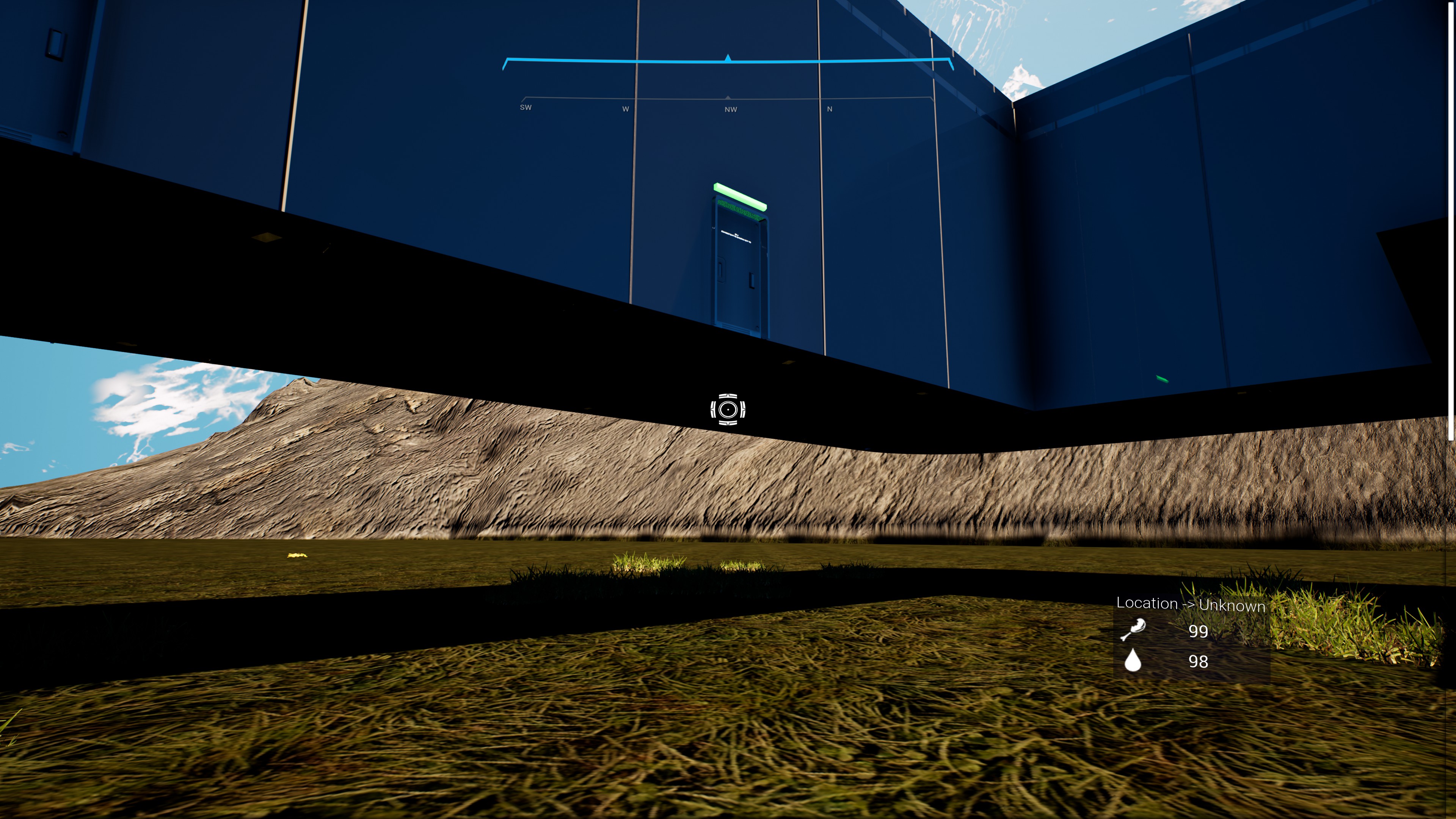 It was at this point that I gave up.

Primordium: Day Zero looks to be a labour of love for its developer. I was in contact with Behron a few months ago and he seems like a really nice guy who is keen to develop a great game. But at the moment, this just isn’t it. It’s nowhere near a great game. At this point it’s hard to even call it a game at all. I did laugh a lot while playing it, but it was more out of a sense of hopelessness than out of enjoyment.

The last line of my review notes summarises my feelings towards the latest build, and I feel really bad about it, but I think it needs to be said: I just can’t play this; it’s awful!

I understand your concern about the path of the game. The goal of the game has always been to be a space-themed survival RPG, but the story is progressing at a pace that slowly gives you access to those features.
The prologue takes place entirely indoors so the building isn’t possible, but when you enter Season 1 you will have access to all of the same survival features that you did in previous updates.
The survival RPG content can also be accessed in the Sandbox and I am working on adding new game modes and scenarios that will open those features up more.
I had a heavy focus on building the space portion of the game because that is where my passion for the game started, but the feedback I have received has definitely shifted my priorities.
It’s been a slow process, but I believe I can fix all of the issues that you have detected.

I would like to mention that I am in the process of designing new character models right now! The goal is to give you full-body customization for the character creation menu so the blocky lizards can go away.
You will also be able to customize a human character in the first season and you will have a new Anima model to work with as well.
I am hopefully going to have a character designer come in and take care of it, but I have been getting back into the character design process just in case!

The rooms are empty for now, but I am in the process of writing side quests that will fill those areas with content. There will also be datapads and hidden items that will help build the story!
Some of those duplicate rooms have been changed up in this update I’ve been working on, but the tram stations are still a work in progress. They are “technically” their own unique levels, but I used prefabs to speed the process up.
I just need to change them up as I did with the other levels.
I also agree that the campaign is really weird! I took some inspiration from Dead Space, so my goal is to capture the feelings that you got from the Unitologists. The text to speech and poor effects ruin that though.
I will be removing the audio for now, and replacing it with something like text or hopefully real voices here soon!

I have logged all of the bugs that you have reported and will get them fixed up as soon as possible! They all seem pretty easy to fix, and I will be adding some more meat to the campaign too!