Turn-based/board game equivalent of an RTS game. Still buggy and with an unwieldy interface, but already fully playable with great multiplayer potential!

Rising Lords is a strange game. Essentially, you have a two layers: strategy and combat. The strategy layer is turn-based version of an RTS like Age of Empires or Starcraft, in which you have only a few resources to manage, and use them to construct buildings for defensive or offensive purposes. The combat layer is a separate tactical turn-based combat where you move a few units on the playing field, each unit with different power relations between each other (pikemen are good against cavalry, which are strong against bowmen, and so on) and complemented with skills/modifiers through a deck of cards.

The game isn’t very user-friendly just yet as it has many bugs (with most being very quickly fixed once reported!), but, most importantly, the interface is too messy – not only are there some missing tool-tips and obscured text boxes, but the game mechanics are explained in a rather haphazard way, with the tool-tips being very fragmented and it’s hard to know where to look for the information you need.

That said, it’s fully functional if you put up with its Early Access quirks, and the AI is surprisingly challenging! Although I’m not entirely sold on the combat (it can often become a simple game of numbers, which makes the tactical mode a chore and the auto-battle too risky) and neither a fan of RTS games, I have enjoyed learning the game’s mechanics and spending some time with it. I’m sure it’ll appeal to fans of the genre who want something slightly different from the norm while hitting the same spots.

I’ve seen mentioned that the game is inspired by Lords of the Realm, which I have never played. I have played some other Impressions games, their more well known City-Builders like Caesar or Pharaoh. Although Rising Lord’s management mechanics are more internally focused rather than pure resource extraction, this is not at all a city-builder! 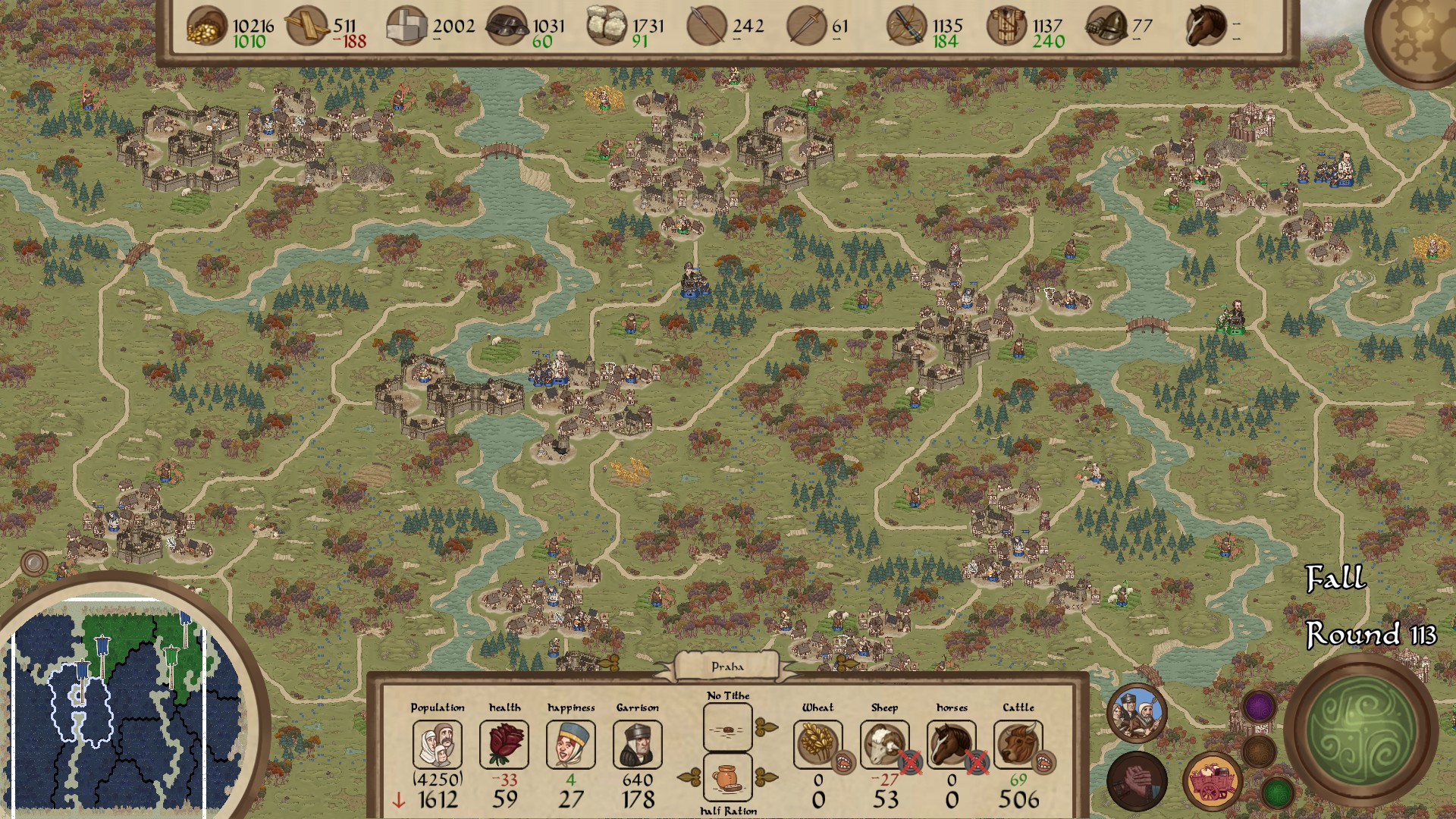 The game’s field is divided into several regions. Each region either belongs to one of the players/AI, or to the “People”, a neutral peasant AI. Each region has only a small number of fixed resource nodes: typically 3 nodes of farm/herding, and then some combination of lumber, stone, or iron nodes.
Depending on your population number, you will have access to a different number of peasant workers which you allocate to each node.

There are 2 internal resources you need to control – Health and Happiness. These are influenced by Diet (food) and Tax (money). You control the amount of food given to your population, which makes them happy and healthy (especially if there is food variety), and you can also demand higher or lower taxes, which lowers happiness. Some buildings also affect happiness.

Farm plots can contain Grain, Cattle, Sheep or Horses. The strangest element of the game is how food production and population levels work and interact. This isn’t helped by hidden season modifiers, either!

Grain can only be worked on by a single Peasant, while Animals can have up to three (increasing their capacity to sustain higher numbers of Animals). Grain is also planted only in Winter, and then Harvested in different numbers throughout the other seasons. Grain numbers are otherwise stable. Animal numbers depend on the current number, however, growing faster when you already have more or them.
Furthermore, grain is always consume by the numbers. Cattle and Sheep, however, have 2 ways of producing food: the first is passive, in the form of dairy products – the higher cows you have, the more people you feed with milk and cheese; the second is active, killing animals to feed the population with meat.

I hope this is enough for you to get an idea of how the game works. It gets more complicated when you add some other factors in – sheep also provide wool, while horses are needed to create cavalry units. I found it rather difficult to wrap my head around all of these unique behaviours, which aren’t straightforwardly explained.

If you give your people more food, they’ll be happy and healthy, and the population will grow. You’ll need enough housing to employ Peasants (otherwise you’ll simply get Beggars which do nothing but hurt your town). The more food you have, the more people you’ll sustain, and the more available workers you’ll have.
You can then employ these extra workers to construct new buildings or work as smiths, who craft the necessary equipment for your troops. Smiths use wood, wool and iron to craft bows, light armor, heavy armor, spears, swords, and so on.

Troops cost gold to support, and they are limited by the amount of equipment you have and the happiness of your town (since soldiers come from the happy elite).

This is basically the loop. Regions are mostly self-sustained. There are random traders that appear in towns that can buy some of your resources and sell you others (at higher prices). You can also send grain from one region to another, though that hasn’t been relevant in my experience.

Buildings are mostly about supporting a higher garrison (defensive soldiers, of various kinds) so that you can use your standing armies offensively. I’ll have to admit this part was a bit disappointing, to me – but I prefer City Builders to RTSs! And the game has enough going on that this simple construction side can still have a big effect on how the game plays out. 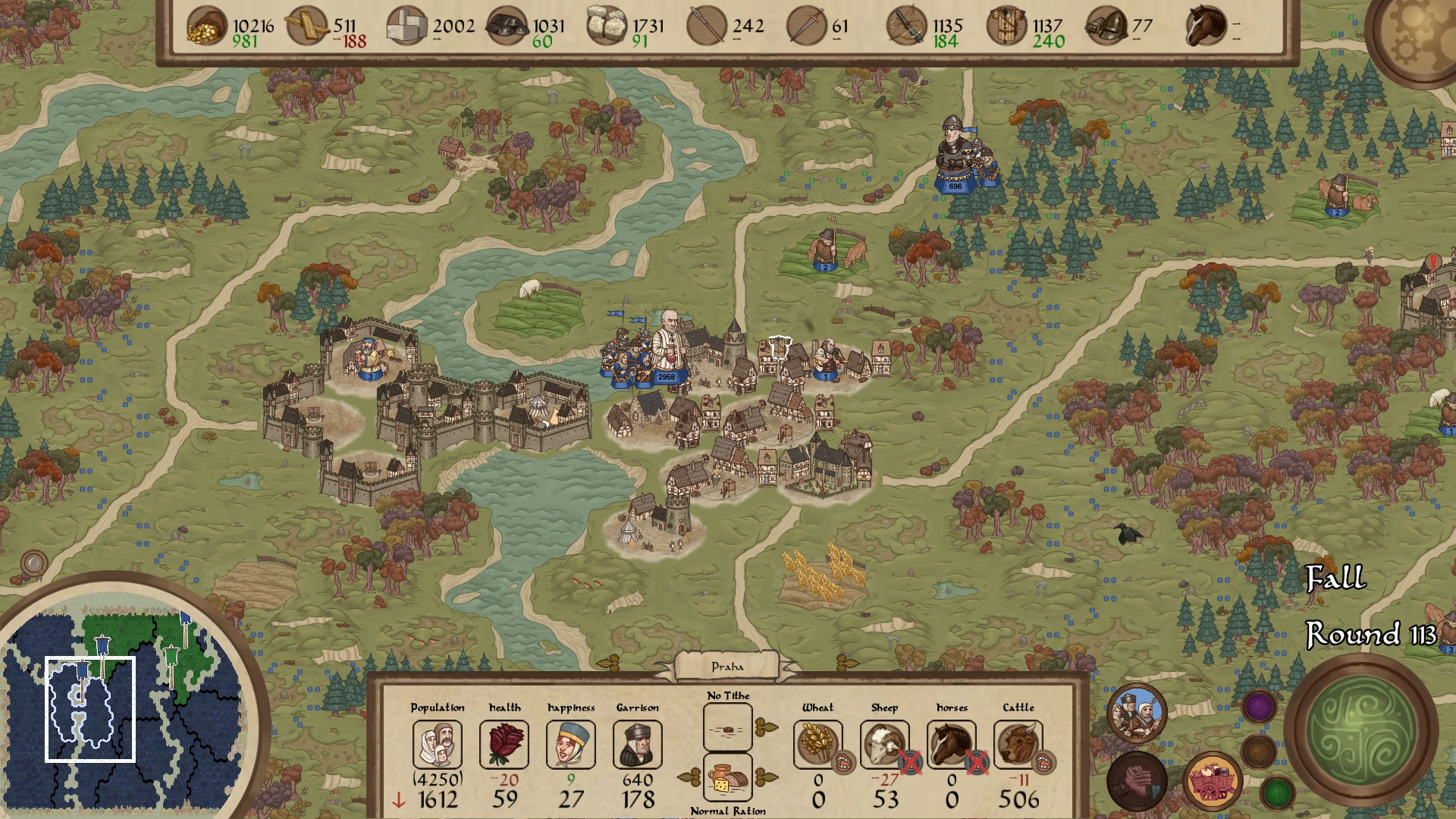 The combat layer is more straightforward – at least more familiar.

You control individual “units” composed of several soldiers of a single type (one unit may be 200 bowmen, another 123 pikemen). Each unit moves once per turn, with their order being determined by their “class” initiative.
You have a deck with a few skills; these cards can be played in any unit’s turn, but may affect only some classes (a pikemen unit can play a card to give an archer higher damage that turn).

There are many units – bowmen, crossbowmen, pikemen, swordsmen, cavalry, knights and peasants. Most of these have some kind of strength and weakness against another – with the exception of peasants which are mostly fodder.

There is also a morale system, mostly driven by the number of your troops that are killed.

Some battles may take place on empty frontiers, but most of them take place in the towns, which may have fortified buildings. Most melee units can’t get through stone walls (without special cards), although ranged units can attack through them.
A battle is over when you kill enough of the enemy team, or you demoralize them enough that they retreat.

While I have nothing against the combat per se, I find it too complicated and time consuming for both the number of battles fought (especially tiny, insignificant battles) and the fact that army size has a huge influence on the outcome. A unit of 600 archers will melt through a 200 archer unit. In general, you’ll want higher numbers.
Positioning also seems to somewhat limited use, for now.
There are also rather few cards available as of yet, and units aren’t very interesting beyond their class counter role.

I have do admit, however, that a carefully played out battle has played a crucial role in my longest game! 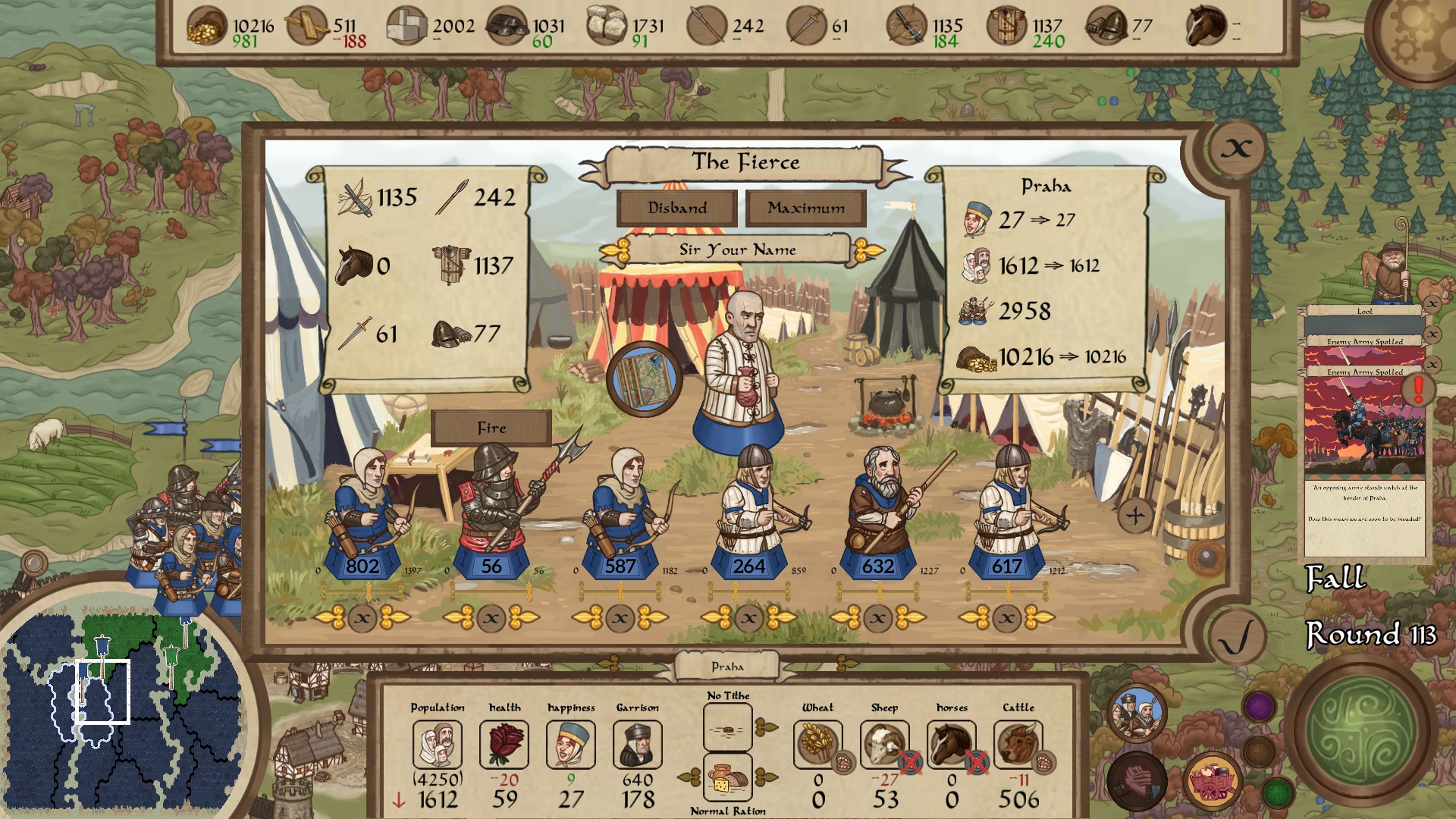 Well, I have a mixed opinion, but also an unfair one.

I said this game was a turn-based RTS, which seems a contradiction in terms. Though not really, if you take RTS to mean the rather narrow genre where it being real-time isn’t really its most important feature. Instead, RTS games play out almost like a race, with a fairly stable plan for which resources to gather and which buildings to build, where and in what order. Well, that’s what you have here. There’s a stable meta.
Although the game does have some random events, the regions are very uniform. Everyone has the same objectives, the same resource productivity, and so on. So it’s a race.

That’s my personal preference, however.

Rising Lords was surprisingly fun to learn! I dedicated some 20 hours to it – and my last game, on a large map, took maybe 8 hours of very hard fighting against 3 AIs. Maybe games go faster once you have more experience and a stable strategy, rather than learning as you go.
It was great to disentangle its idiosyncratic mechanics, and that would have been enough to get my money’s worth!

If you’re looking for a long-term multiplayer game, I’d advise caution, wait and see. I am not sure how the multiplayer meta plays out, or how it will change as the game nears completion.
The biggest feature the game is lacking (against something like Age of Empires) is a faction system. Every player is exactly the same, so it may be difficult to justify sustained play – seems too long for something like chess, and too uniform for something like AoE.

If what you’ve read so far intrigues you, however, definitely give it a go! If not now, wait for release. But it’s a meaty game already.

It’s not really my thing so I will probably not keep playing it, but I enjoyed my time with it. 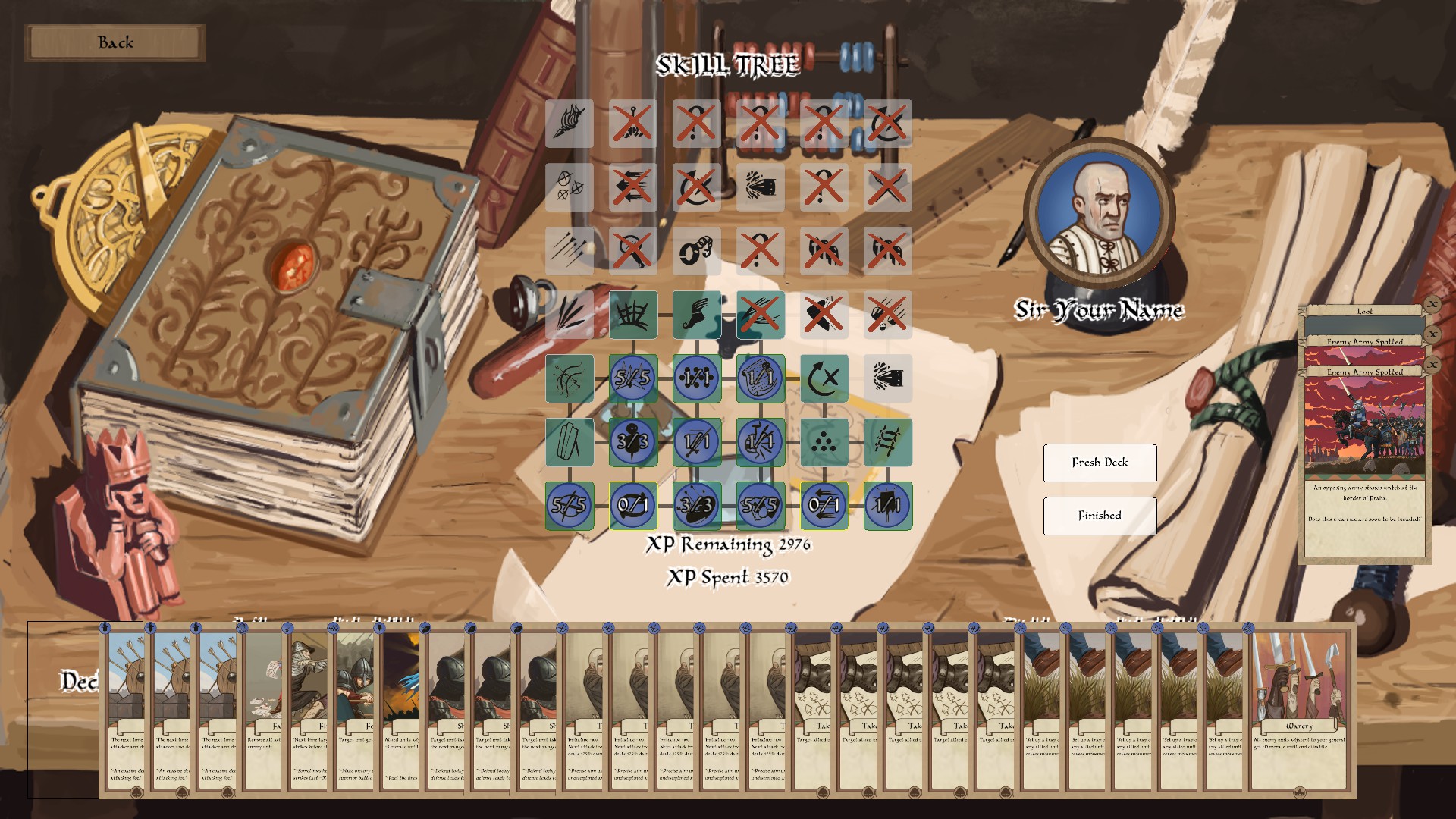 If you like the fairly stable build-order of Age of Empires and a small set of resources to manage, you will probably enjoy the game!

I doubt it will sustain the multi-player interest for long periods, but you’ll probably get 30-50 hours out of this if you like biting into the details of focused strategy games!