Gravcycles are back in the air! Has Disintegration fixed the problem it originally had on the public beta?

Disintegration is an FPS/RTS mix set in a sci-fi world where humanity discovered a way to put humans into robotic shells, making the body stronger and leaving the new humans the possibility to live indefinitely. In the game, you are one of these robot-humans and will pilot a gravcycle, a special kind of floating weapon platform, while also being able to command your ground troops.

Is It a World Worth Fighting for?

Disintegration, along with the already seen multiplayer modes, boasts a single-player story mode that guides the player through a number of long missions (between 30 and 40 minutes long). These are not only useful to get accustomed to the game’s atypical gameplay, but also to understand the lore and the characters behind it. You are Romer Shoal, a gravcycle pilot that fights along with a small group of rebels. Your objective: don’t let the Rayonne forces eliminate the last remnants of humanity. Missions in this regard are quite well designed, especially in masking the underlying repetitiveness of the game. 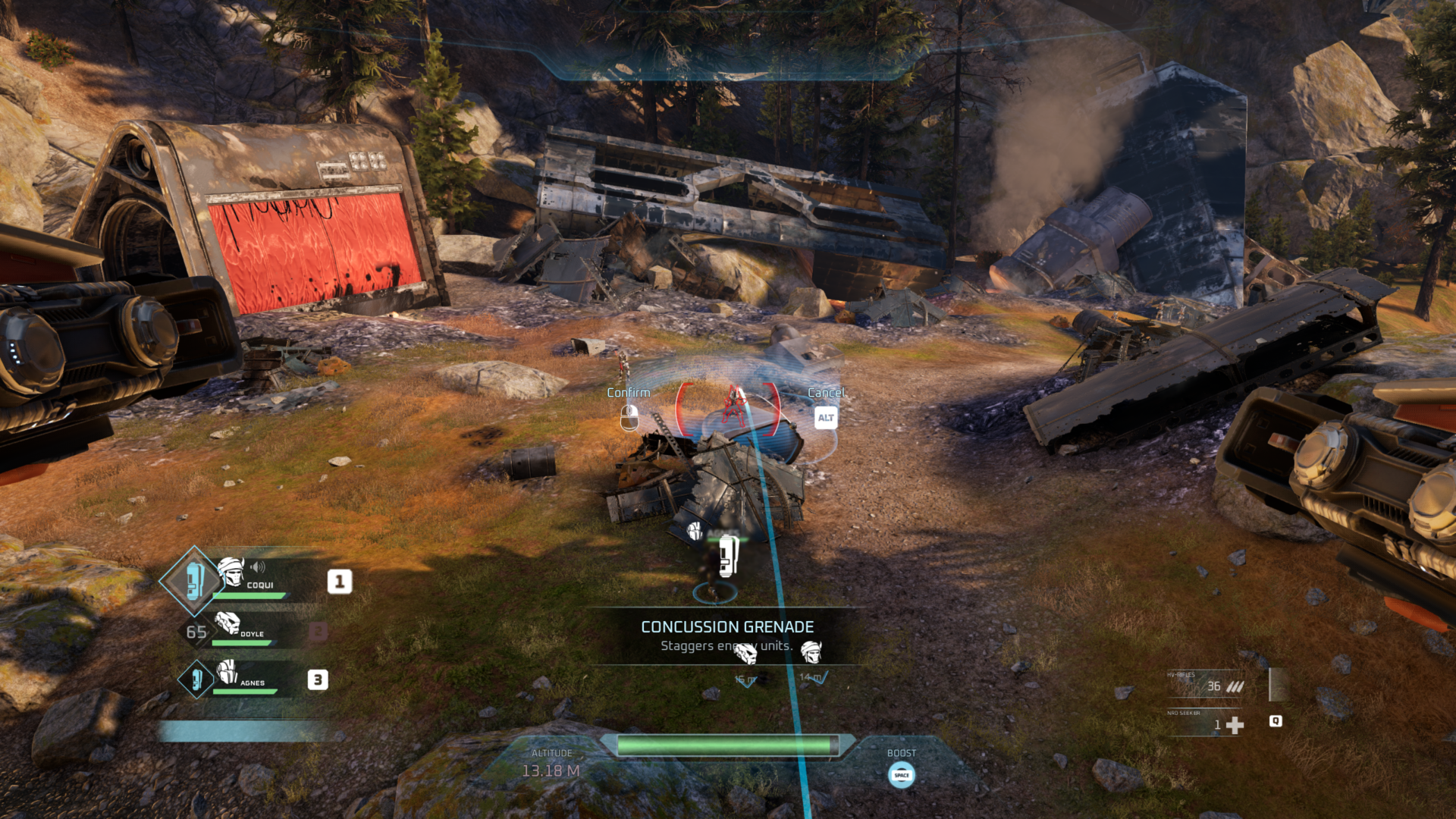 While most missions will have you control a small group of three infantry units, sometimes you get smaller or bigger groups: each unit is clearly identified in your HUD, along with its special ability. From the skies you can give orders to your battle group, like “move here” or “attack this target”, and the game will do the rest, usually not putting your units in excessive danger unless your order wasn’t reckless. The units’ abilities are the real-deal here and can be used to take out multiple targets and once, or create points of advantage for your units: combining them can yield quite powerful results, like capturing a group of enemies in a time-slowing field before calling a mortar barrage on them.

Missions are very linear, go from point A to point B style, and thus do not offer good replayability, even when taking into consideration the side quests given by your crewmates, which consist mostly of smaller missions with special objectives, like “Kill x enemies with this weapon” or “Complete the mission before this amount of time passes”. I sincerely expected more variety here, especially considering the cost of the game.

The Other Side of the Medal

When tired of killing AI-controlled enemies, players can hop on to Disintegration’s multiplayer modes. These offer a variety of game modes where you play against other players, in different maps. The game offers three game modes: capture the zone, a kill-confirmed deathmatch and one similar to a capture the flag. In each of these modes, players are divided into two teams of five elements each. Each player picks a crew from a pool of nine, each one with a different gravcycle and infantry units, making it stronger in certain situations and less dangerous in others.

After playing the single-player campaign, the passage to the multiplayer modes of the game completely break the tactical feel of the game, highlighting one the biggest issue that Disintegration already had in its public beta: the focus completely shifts from the ground units to gravcycles, which become the biggest threat. In this PvP environment, ground units are left basically on their own, following the player and engaging the enemy units the face, with little control and intervention by their commander, also thanks to the lack of the time-slowing mode when placing abilities.

When looking at Disintegration’s technical side, we find a pretty game, but not a whole lot more. While graphics look good, the nature of the game, fighting 10-15 meters up in the air, makes you look everything from the distance. Environments aren’t very detailed and in single-player maps are missing some details that could’ve made them unique, especially when considering the sci-fi nature of the game.

Optimization-wise the game doesn’t really have any problem, but the framerate has a 60 fps cap that feels somewhat out of place in a PC game in 2020, considering that high-end machines could easily run this at way higher framerates. Last but not least, the possibility of destructing buildings is fun but pretty useless, mostly because these are rarely used by the enemy units and the slow rate of fire of our weapons doesn’t make it worthwhile.

Disintegration is a game with an interesting but poorly developed concept, which offers a fun single-player campaign and then strips pieces of the game out on its multi-player modes. All of this, accompanied by somewhat repetitive gameplay and a steep price, make this game a PAUSE for me.