Utawarerumono: Prelude to the Fallen is on the PS4 and it is time to celebrate. May your sake cups floweth over!

For fans of Utawarerumono, just go ahead and buy Utawarerumono: Prelude to the Fallen right now or at least wishlist it for the next PSN sale. This is the origin story, the big one, the game that was released in 2002 and eventually ported to the Japanese PS family of consoles and handhelds, but never given a North American or EU release for PS. That is, at least until now. As of May 26 for North America and May 29 2020 for the EU, it is now available on PS4/PSVita to hold and cherish till death do you part, or at least until you lose the disc or forget your password and can’t access your digital PSN games because of evil internet gremlins.

So, what does this origin story involve? Well, if you have watched the anime that was made back in 2006 and released in NA/EU in 2009-2010, you probably know everything there is to know. The protagonist, Hakuowlo, wakes up with amnesia – what game doesn’t need more amnesia, am I right? – and is cared for by a small family of healers in a rural village. Things are not quite right from the get go, though. Everyone has furry ears and tails, the world looks sort of medieval and certain animals like horses are replaced by tamer versions of Velociraptors. On top of this, you have a weird looking mask stuck to your face that doesn’t come off, no matter what you do. You eventually heal up and become close to the people who cared for you, including a certain teenage girl who cares above and beyond what the others do – hint, hint, nudge, nudge – but then certain events lead up to conflict and war. The entire village then looks to Hakuowlo to help, and a reluctant hero’s journey begins. I’m not going to say more than that other than there is a huge cast of characters involved that somehow never feels overblown, but suffice it to say that a long and dramatic story unfolds with Hakuowlo at the center of it all. 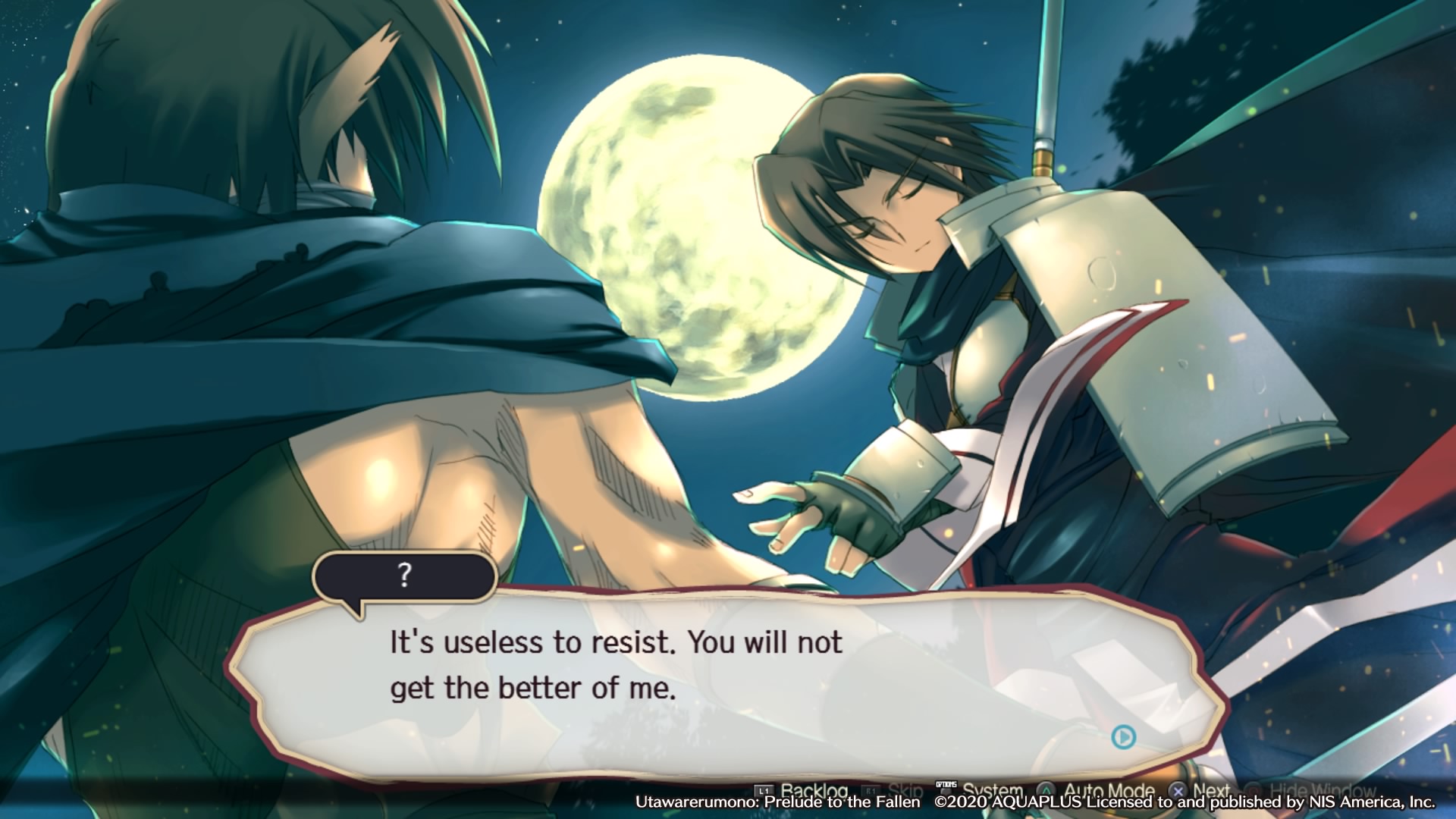 As far as I can tell, this game contains the same content as the anime with just a wee bit more here and there for some side stories, but not much more than that. If you haven’t watched the anime, then DON’T. Just play this game first, it came before the anime anyway. Not that the anime is bad, it is quite good to be honest, but if you are a fan of visual novels then I suggest sticking with that to begin with. The only thing you’ll be missing are, well …animations I suppose. Battle scenes just aren’t quite the same with static images and sound effects, but do at least watch the subbed version if you decide to watch it. Please realize that by watching the anime you are completely ruining the experience of playing the game’s story for yourself. You’ve been informed, so take that as you may. 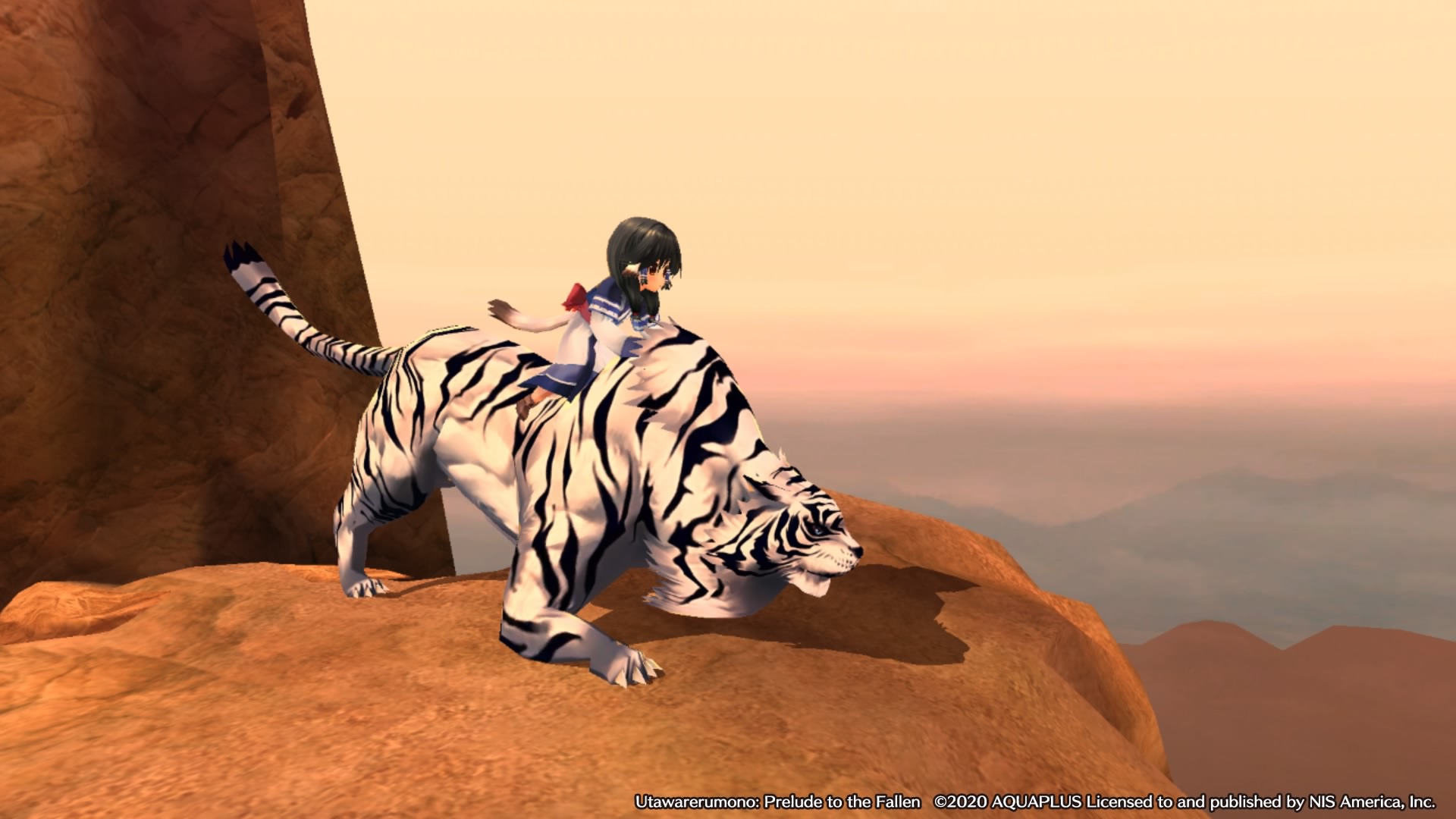 Now, Utawarerumono: Prelude to the Fallen probably isn’t rolling off your tongue easily unless you are familiar with the series. For those who haven’t heard of it, the Utawarerumono series of games is, in my eyes, a phenomenal set of alterna-world visual novel tactical role playing games that resemble Fire Emblem to a degree and involve anime style characters with lots of long, fuzzy ears and a tails that should not be grabbed – trust me on that. There’s magic, TRPG battles, interesting characters, monsters, character driven storylines, wonderful side stories, and I have to use the dreaded overused word “Epic” to define the rest of the game because this story is huge. The game is fairly long too, clocking in around the 40+ hour mark for most players and hours can go by in between battles at times. One sec.

EPIC.
EPIC.
EPIC! Yep, that’s Utawarerumono for you. This story is not short. 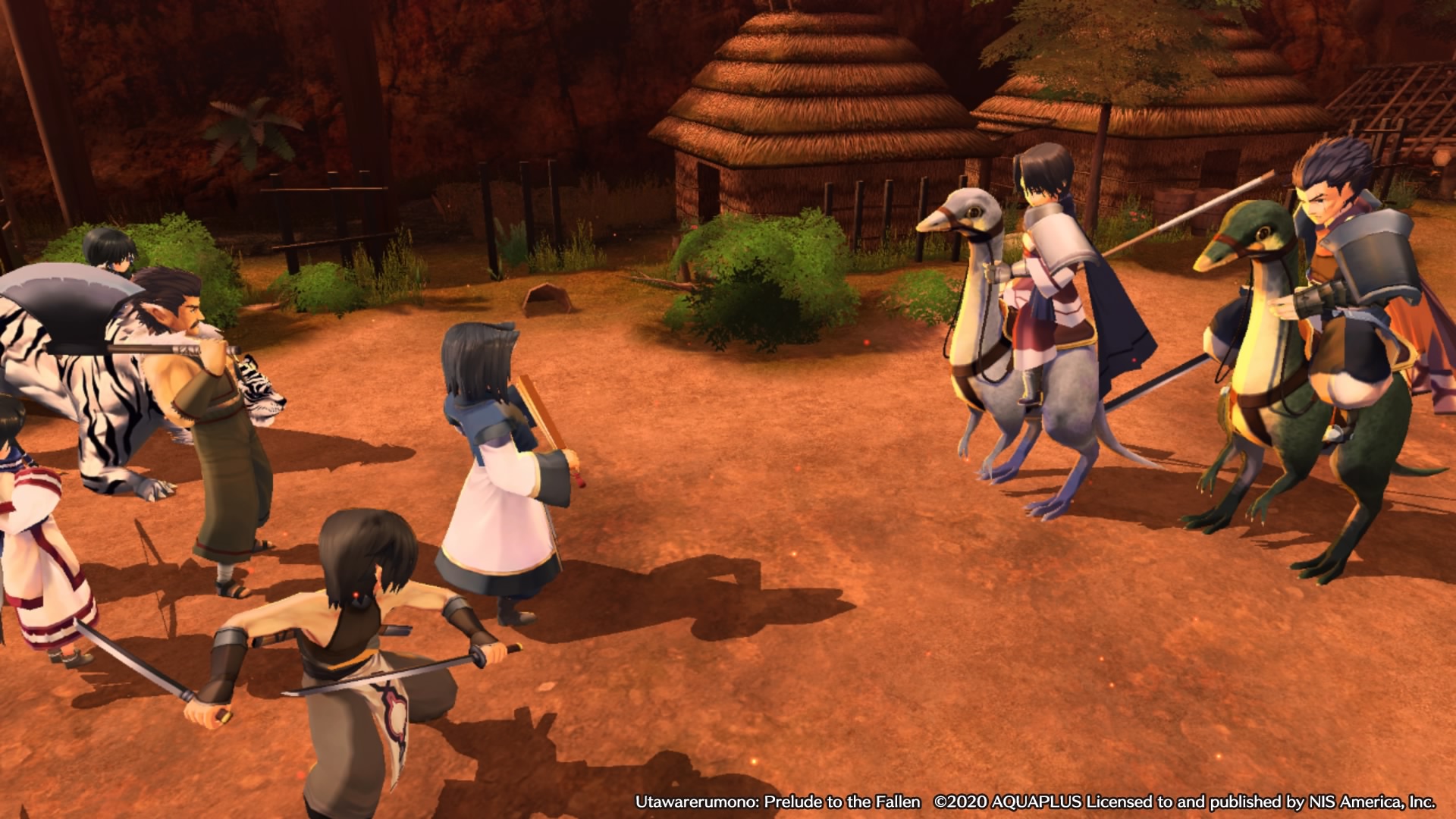 I am not exaggerating, this game seriously takes its time to develop each character and their relationships with each other. Not many games go through this kind of trouble to define the world and the interactions between every person involved. The sequels to Prelude to the Fallen were even longer, so it really wasn’t a surprise to me that it was this type of slow cooking innuendos, embarrassing moments, dramatic events, levity, and general camaraderie that cement the game together with a sense of community and family. When events lead to war, some of the scenes that play out are more than dramatic, they are heart wrenching. It is that level of personal involvement with the characters that really drives the game forward. 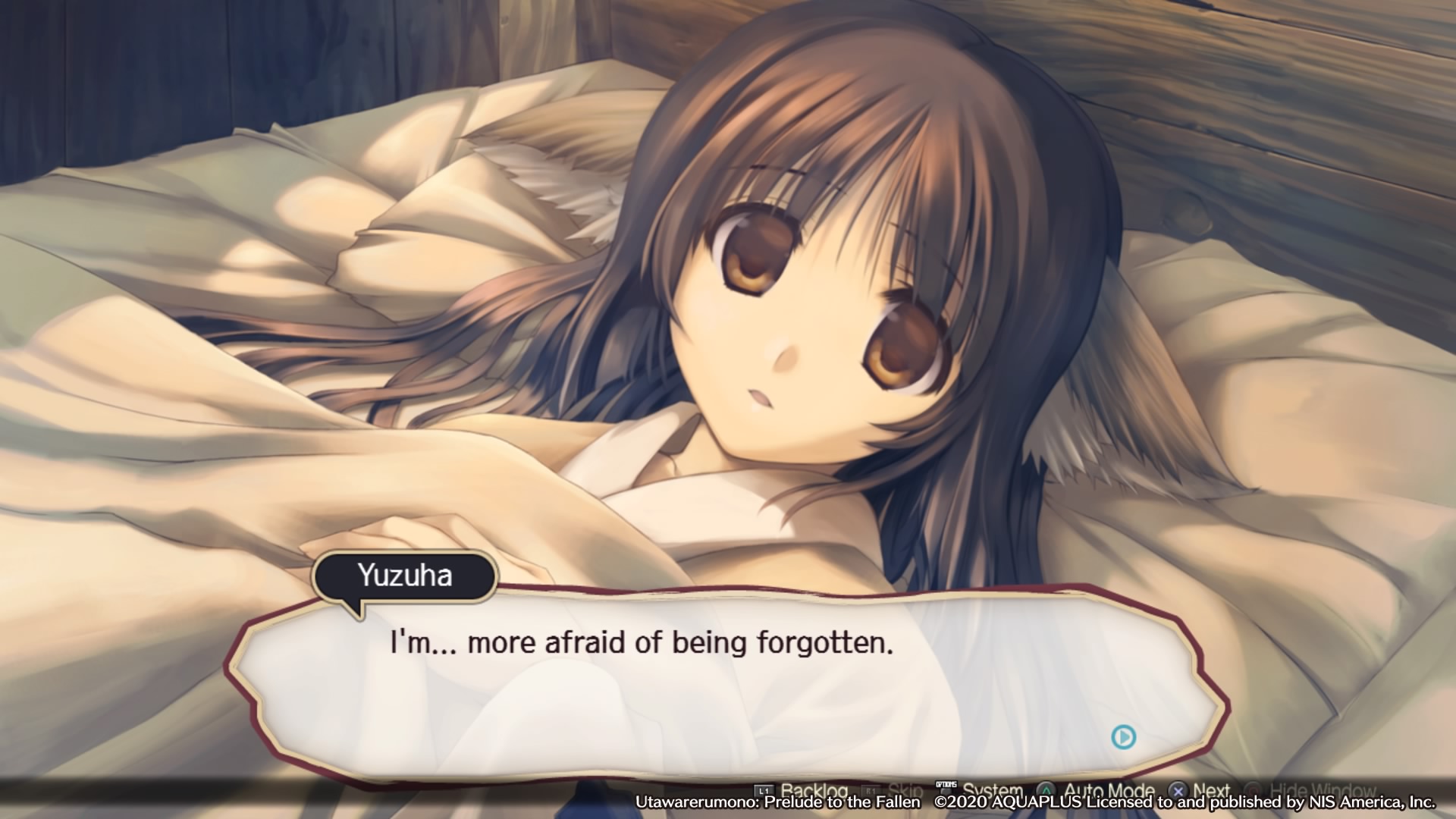 Yet, that’s not all. I can read the dialogue and enjoy the moments as well as anyone. What seriously sets this game apart is the portrayal of strategy and wits. The battles don’t just come and go, they have serious consequences and it is intriguing to watch how the protagonist goes through some very clever strategies in order to win them. Winning doesn’t mean things are better either, because, just as in real life, once you tackle one problem another arises. The end results of battles are never quite clear, leaving victories a curious mix of relief and anxiety at the same time. The twists and turns never let up, and it keeps you on your toes to the very end. 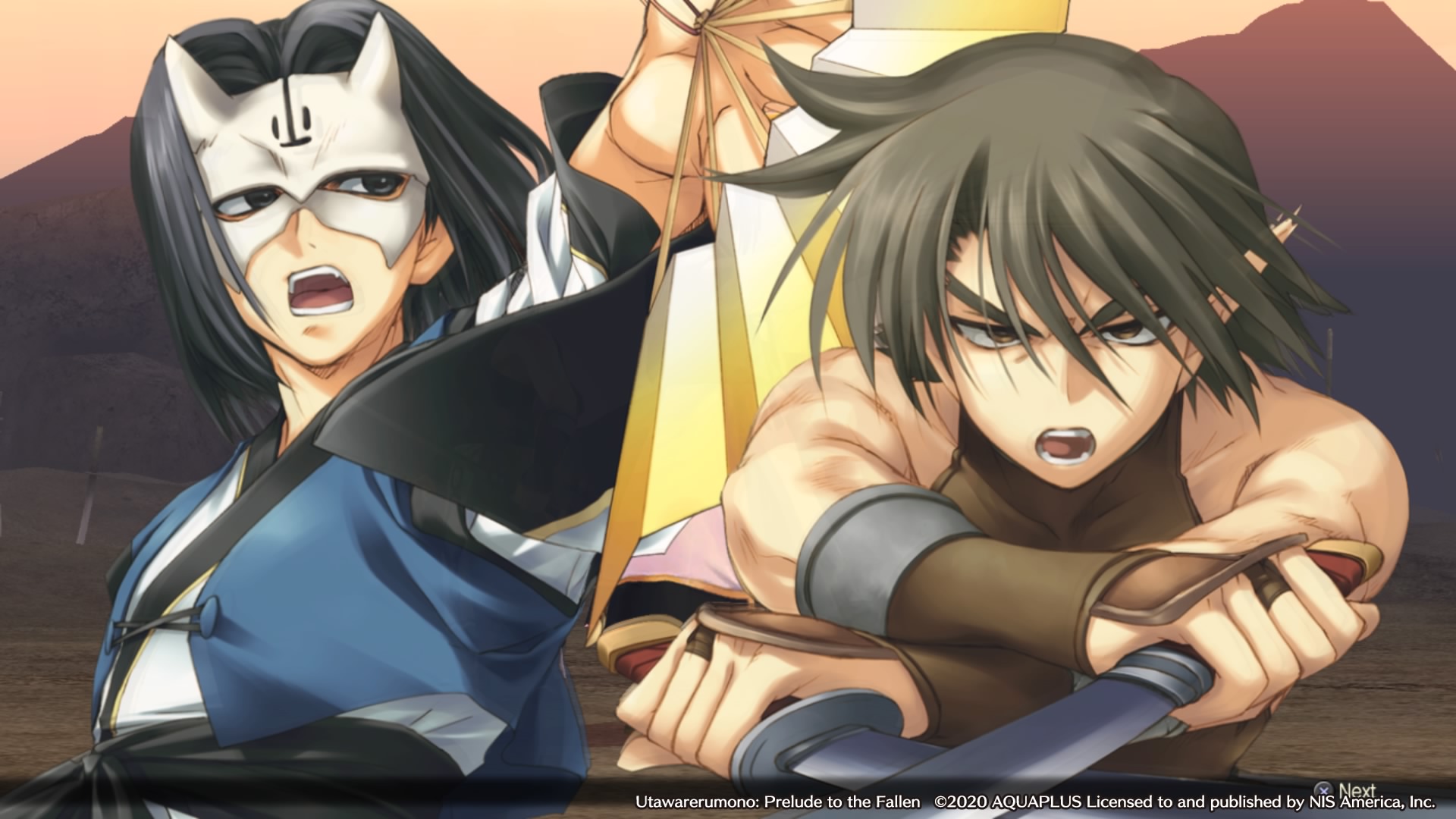 For a visual novel, Utawarerumono: Prelude to the Fallen has some fairly involved yet simple to use gameplay mechanics. This is a TRPG with grid based movement, each character having a different grid attack range, and special attacks involved. There are chain attacks, co-op attacks, special moves to unlock, final strikes, inventory, and a few items to manage, but it is not overwhelming in the least. As a matter of fact, the game goes out of its way to make the gameplay easy to understand. You can automatically see your best moves, though not always as sometimes I could spot a better move than the game foretold me, and if you mess up there is a Rewind function to take back your moves to try again. This seriously changed the game for me because instead of being defeated and having to redo the whole battle I could just back up to where I made a bad choice and redo things to win.

Battles include some variety as well, not just “us vs. them” situations, and there are some battles with multi-level or multi-stage battles that took me up to an hour to beat in some cases. Overall, I enjoyed the battles quite a bit, as it is easy to play yet not dumbed down. You can increase the difficulty in case you are looking for something more challenging. What surprised me was that the game increasingly got more intricate with the battle situations the closer I got to the end. That’s almost hard to grasp for what some folks may assume is a light-hearted visual novel. The TRPG almost chess-like strategy was not a detriment to the game, though, in fact I think it is a major enhancement to a rather long tale being told. You get a strong sense of the war strategies from the gameplay. Towards the last hours, I was really looking forward to each battle and what I would need to do to get past it. 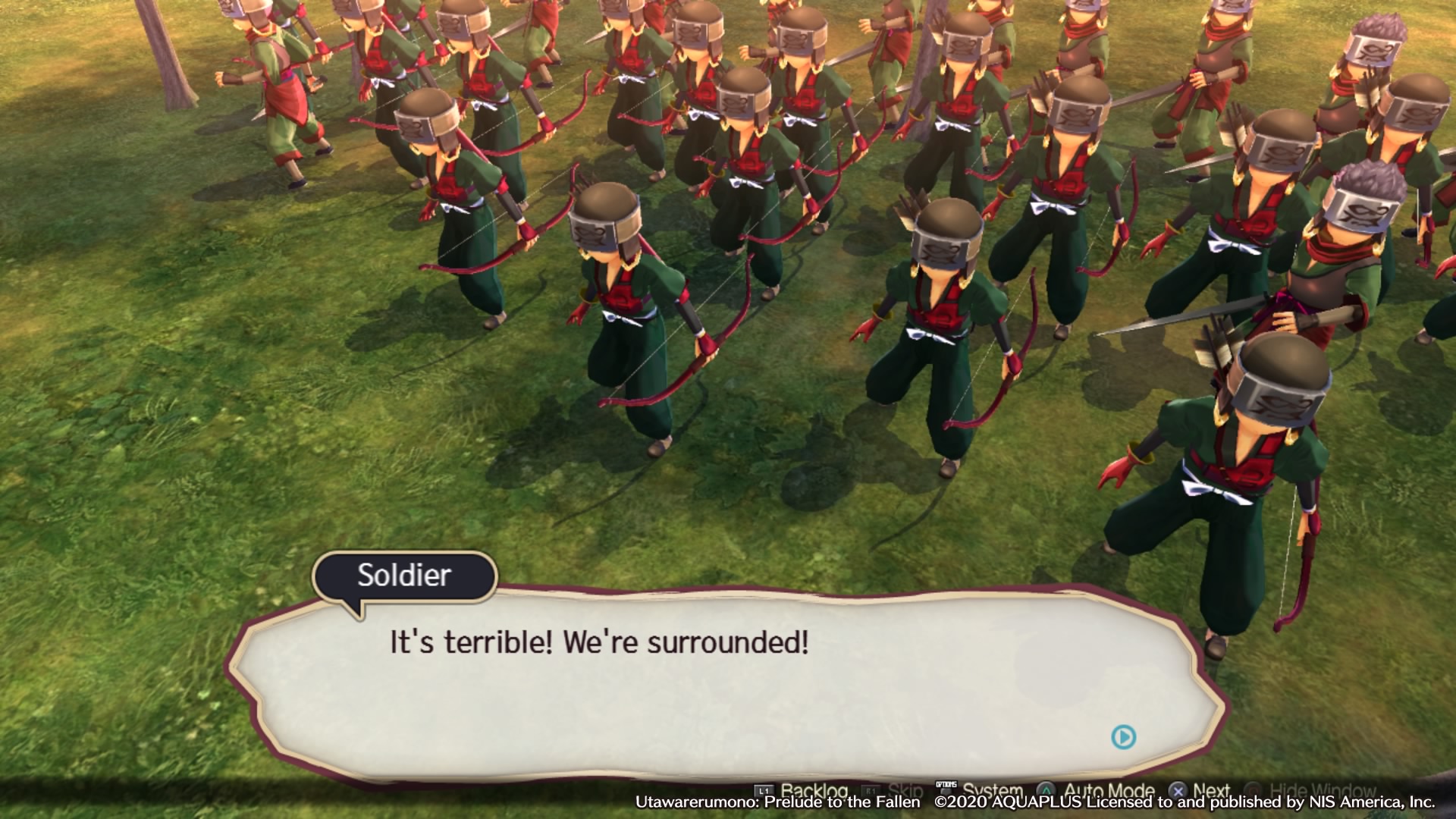 Attacks are timed, but you can use the L1 button to auto-time them if you have trouble, though you won’t get any bonus Zeal doing that. Oops! I forgot to mention what Zeal does. It is basically SP you accumulate for more powerful final attacks that can make or break the battle. It is not just limited to battle-hardened warriors, but even your healer can use Zeal to completely heal someone in the midst of bloodshed. Eruruu, the girl who has a major crush on you, also has other abilities like group heals, buffs, debuffs, and the like. Your party members have some of the same, but none of them are quite as effective as Eruruu’s, so keep her safe at all costs.

One thing that I didn’t quite like was that most of the battles end if your protagonist, Hakuowlo, dies. That always made him the “King” in the chess-match style battles because I could barely use him to attack unless I had no choice. If he took too much damage, it became an embarrassing defeat. You are relegated to protecting him as much as possible and then using him to sneak up and attach someone once in a great while when danger wasn’t much of an issue. There is XP you gain and spread across ATK, DEF, and Magic DEF. I generally just maxed out his DEF to protect him. 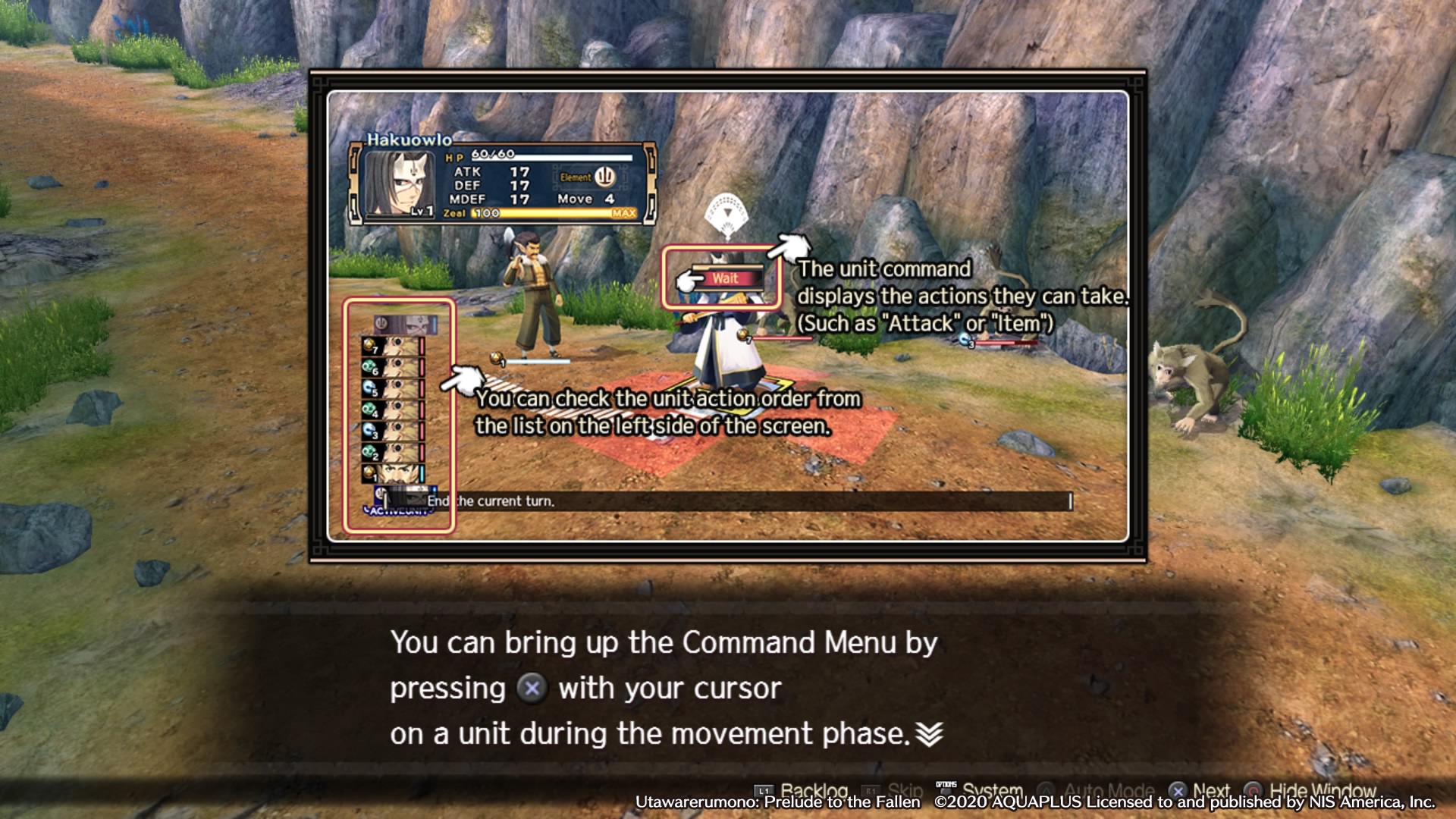 There are also some training sections where you can gain some XP if you feel underleveled. I dabbled with it a few times, but I have the feeling most people probably won’t need to use it to level up until maybe towards the end of the game, if at all. Still, I feel it is nice to have the option in case the battles overwhelm you. 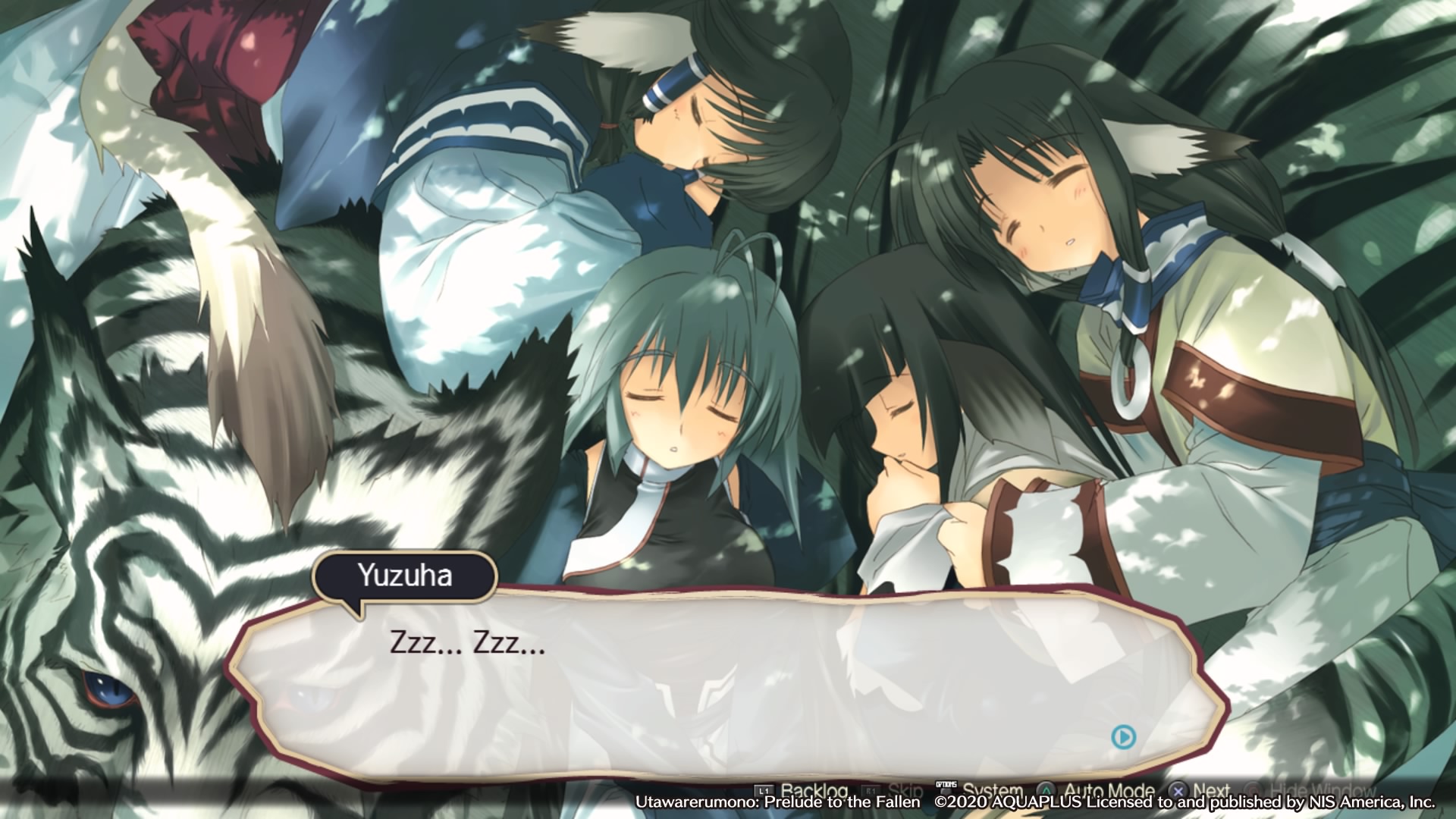 In the end, Utawarerumono: Prelude to the Fallen is a fantastic HD remaster of the original PC version of the game and the translation to English is done very well. I say this never having owned the original 2002 PC game, but from what I could tell looking at the YouTube vids of it, the artwork has been up-scaled and the battles redone in the same engine as the other Utawarerumono sequels. The game is still using PS Vita style visuals since it is released on both PS4 and PS Vita, but because the game is primarily a visual novel and not an action game, it is not a detriment to the game series as a whole.

Is it a good place to start? Yes, and no. I have to say that the sequels are so well written that they stand well on their own. I would even go so far as to say they are more charming and endearing. Prelude to the Fallen gives a huge amount of backstory, but you could easily start with Mask of Deception instead and it would not hinder your journey through Utawarerumono all that much. Given the choice, though, I’d start with Prelude to the Fallen first if it is an option for you. You’ll just have this incredibly large amount of hidden knowledge that won’t make sense in the sequels until close to the end of them. The story is a bit less interesting at the onset compared to Mask of Deception or its followup Mask of Truth, but after the 8-hour mark in Prelude you become so invested in the characters and the battles that you don’t mind the slower pacing. Keep in mind sometimes 1-3 hours could pass between battles, so if you are not used to visual novel games this might be a stretch for newbies to the genre. The characters are endearing and the relationships formed can totally tug at your heartstrings. Playing this game will take you on a long journey from the very beginning of the tale to its very memorable ride to the end. Utawarerumono: Prelude to the Fallen is a great visual novel with a surprisingly capable TRPG that is easy to get the hang of, yet challenging as you progress. For fans of the series, this is an insta-buy. While the artwork and intro music are admittedly a bit dated, with the wonderful voice acting and epic story it contains, this is a gem of a game to own. It feels so good having this complete the trilogy of games. I wholeheartedly recommend buying them if you enjoy visual novels or anime of any kind.