Weird and wonderful creatures and an interesting colour palette are a good start, but there needs to be more than that.

You play a human space traveller / colonist arriving in a fancy starship at a grim-looking planet (presumably the titular Nibiru) that has previously been colonised by humanity. The main menu and character selection screens take place on the starship’s bridge, where you’re given a choice of one of seven characters to play, but the game proper starts with you on the planet’s surface, dragging yourself out of some sort of survival pod amongst the ruins of a ship. I’m assuming it’s the same ship, but that’s not quite clear. It’s your job to survive, and if you can work out what’s going on on the planet’s surface, that’s even better.

There’s obviously something of a story here in the developers’ minds, but so far it’s not clearly expressed in game. The starting sequence and the snippets revealed as you work your way through the game’s various quests suggest some sort of disaster, both on board the ship on which you arrived and amongst the existing colonists on the planet. But some introductory text or a video describing what your ship was doing, how you ended up on the planet, and what’s happened on Nibiru in the past — or even just a bit more information provided on the Steam store page for the game — would go a long way. As it is I oscillated between “Oh, that’s pretty cool” and “Why bother?” 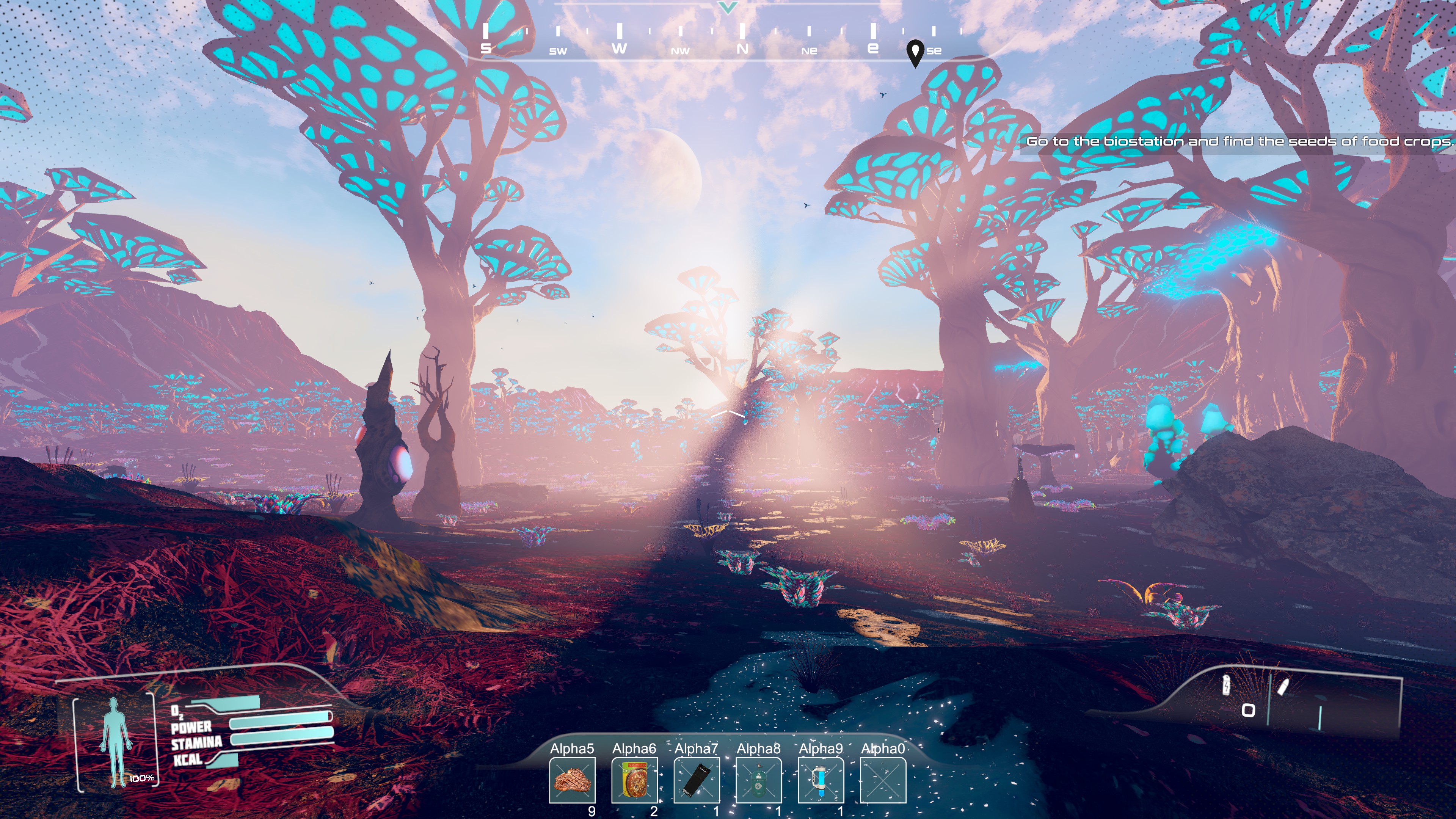 Nibiru’s core gameplay is similar to most other first-person survival-crafting games, but from what I’ve seen so far, it lacks any base building. The developers also seem to have made some odd design decisions with which I’m none too enamoured.

The basic game loop involves travelling across the rather large map harvesting resources from ore nodes and plant life and killing or avoiding the various aggressive creatures you encounter along the way, crafting survival essentials, tools, weapons, and ammunition wherever you can to try to ensure your survival, while you try to discover what’s happened to Nibiru’s population of human colonists. As you kill, harvest, craft, and explore, you earn experience points and gain levels, each of which lets you choose a skill to make your life easier. At the beginning you choose to play one of a number of character classes — soldier, geologist, etc. — but the only real difference between them is in the starting skill assigned to each, which becomes unimportant after you’ve earned a few skill points yourself anyway. The skill system is very limited and fairly uninteresting at this point. 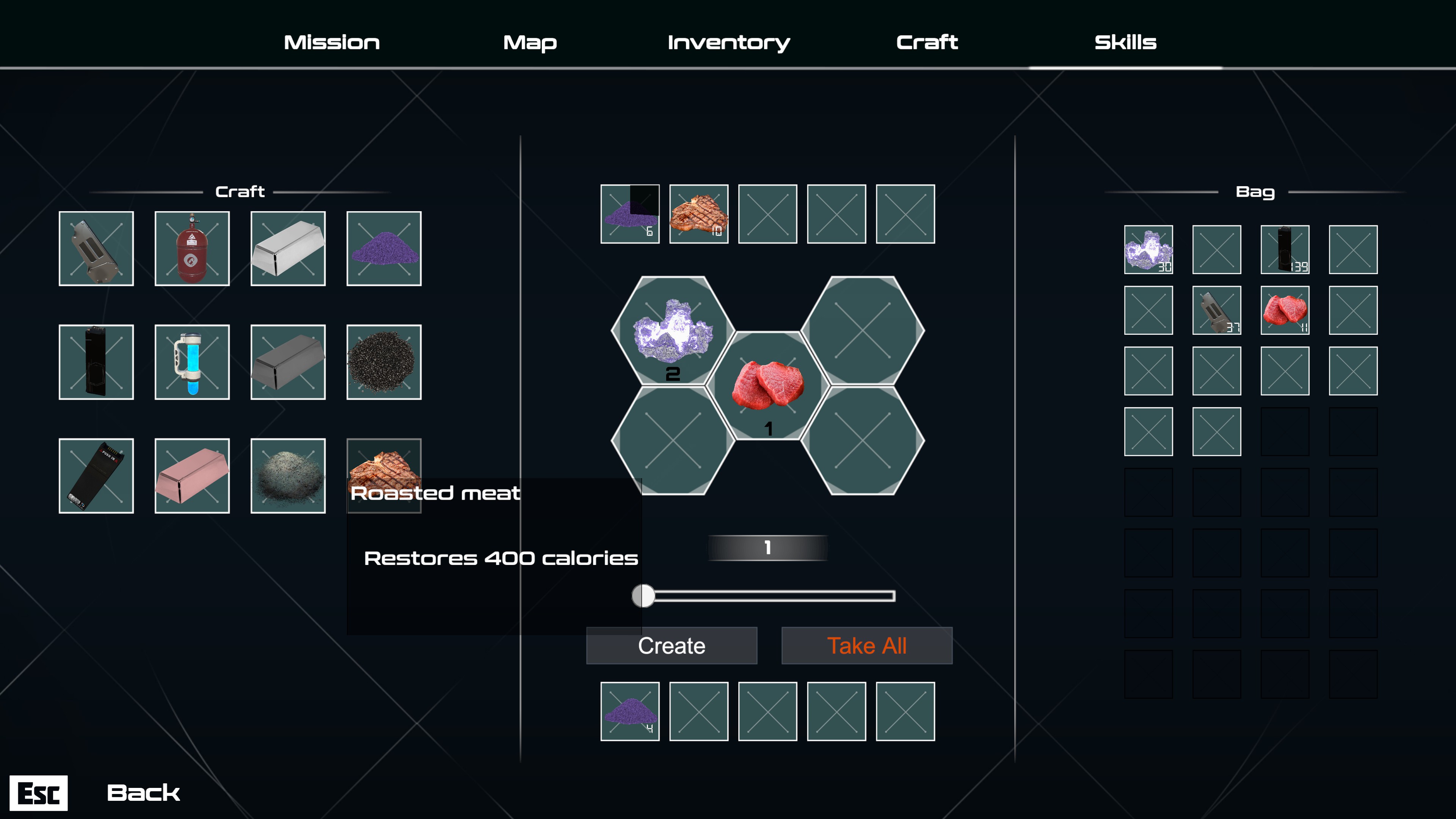 The game is very quest-centric, with progress through the game strictly governed by what your (poorly written) quest log tells you to do next. You can go off and do your own thing, presumably, but quests are revealed and resolved in a linear fashion, so even if you’ve mined a bazillion units of iron ore, you can’t complete the iron ore mining quests unless you mine it then and there … or at least pick it up again from storage. This wouldn’t even be so bad, but most of the quests are fetch quests and they typically have you running back and forth across large expanses of the map that you’ve often already explored. If the game is going to be so focused on quests, they need to be improved.

There’s a wide range of indigenous life to encounter, not all of which is aggressive towards you, and some droidy things, too. Enemies of different types will sometimes attack each other, which is great, but AI seems to be fairly simple, so don’t expect any surprising tactics when you do fight. Speaking of fighting, it’s best avoided. You earn experience and droids can drop some useful resources, but organic enemies only ever seem to drop raw meat, and you’ll typically expend a lot of ammunition killing them, so generally you’re better off just keeping away when you can. 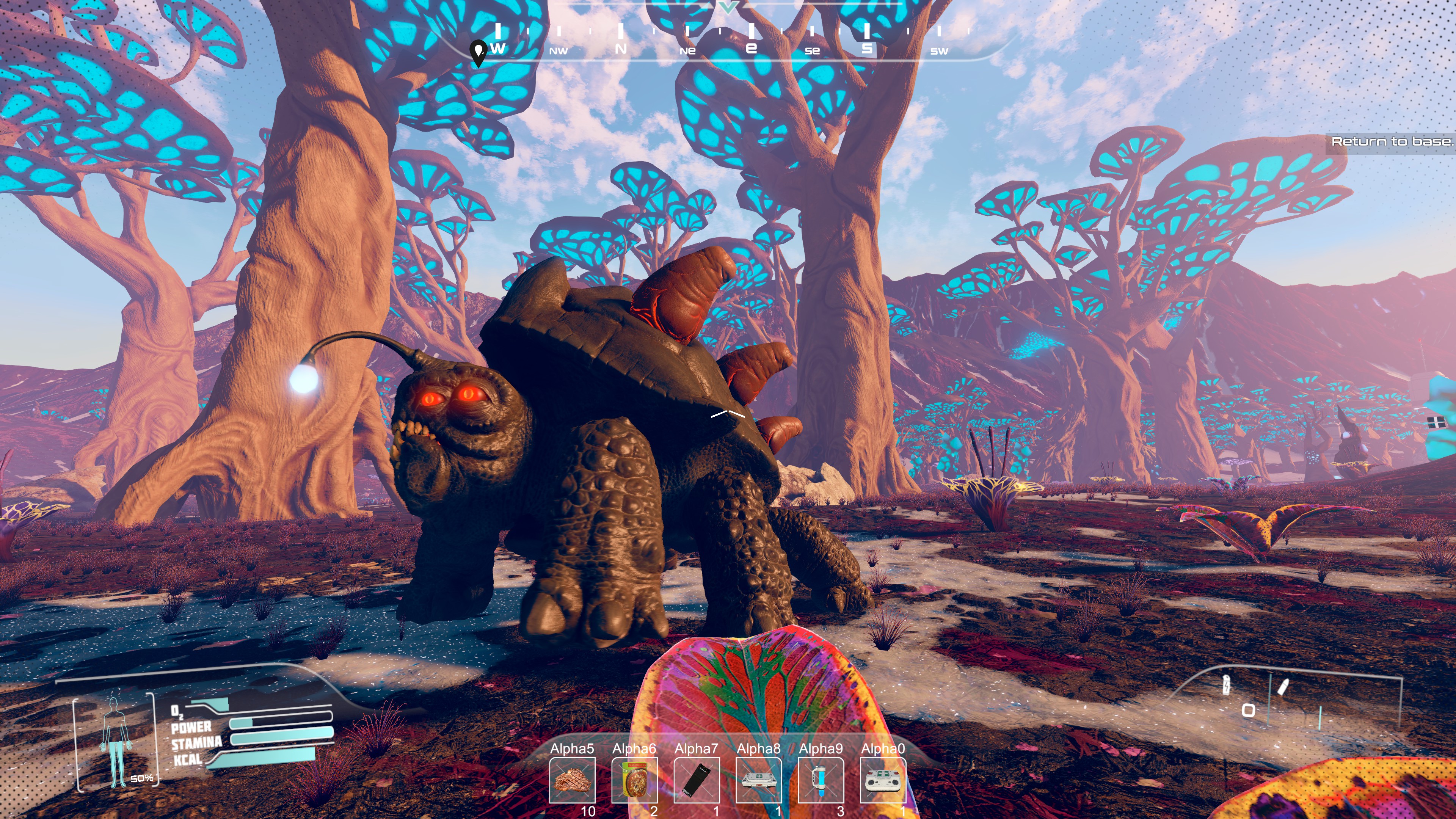 Resources are a lot scarcer and survival and power drain much less friendly than most other survival-crafting games I’ve played. In order to respawn back at your base when you die you have to keep the base generator powered, which uses a resource continuously, even when nothing is in use; otherwise you respawn back at the starting location. Ammo is expensive to manufacture, and resource nodes are fairly scarcely strewn across the large map. They also don’t seem to respawn, or if they do then it’s not often. This all makes the crafting part of the game much less prevalent — and much more tedious — than I would have liked.

Survival involves Oxygen, stamina, suit power, and energy. If any of these apart from stamina drop to zero, you start taking large amounts of health damage frequently until you address the lack or die. Similarly, if you take combat or falling damage causing your health to drop to zero, you die. Energy, suit power, and oxygen all drop continuously and fairly fast, even when you’re inside a powered and sealed building.

Probably the worst design decision, though, is the ammunition requirement on the multitool, which you use for harvesting resources. Run out of ammo and you can’t harvest anything, which means you can’t get any more ammo, and so on. Now, _sometimes_ when you die you seem to respawn with more ammo for the multitool, but not always — usually you drop your inventory but retain your equipment and level of loaded ammunition within it. It’s frustrating, and easy to be caught in a death loop with no ammo or resources, and no way to get any more. The respawn mechanic without a powered base also doesn’t seem to make any sense from a story perspective: am I a clone? If so, why don’t I have more equipment? 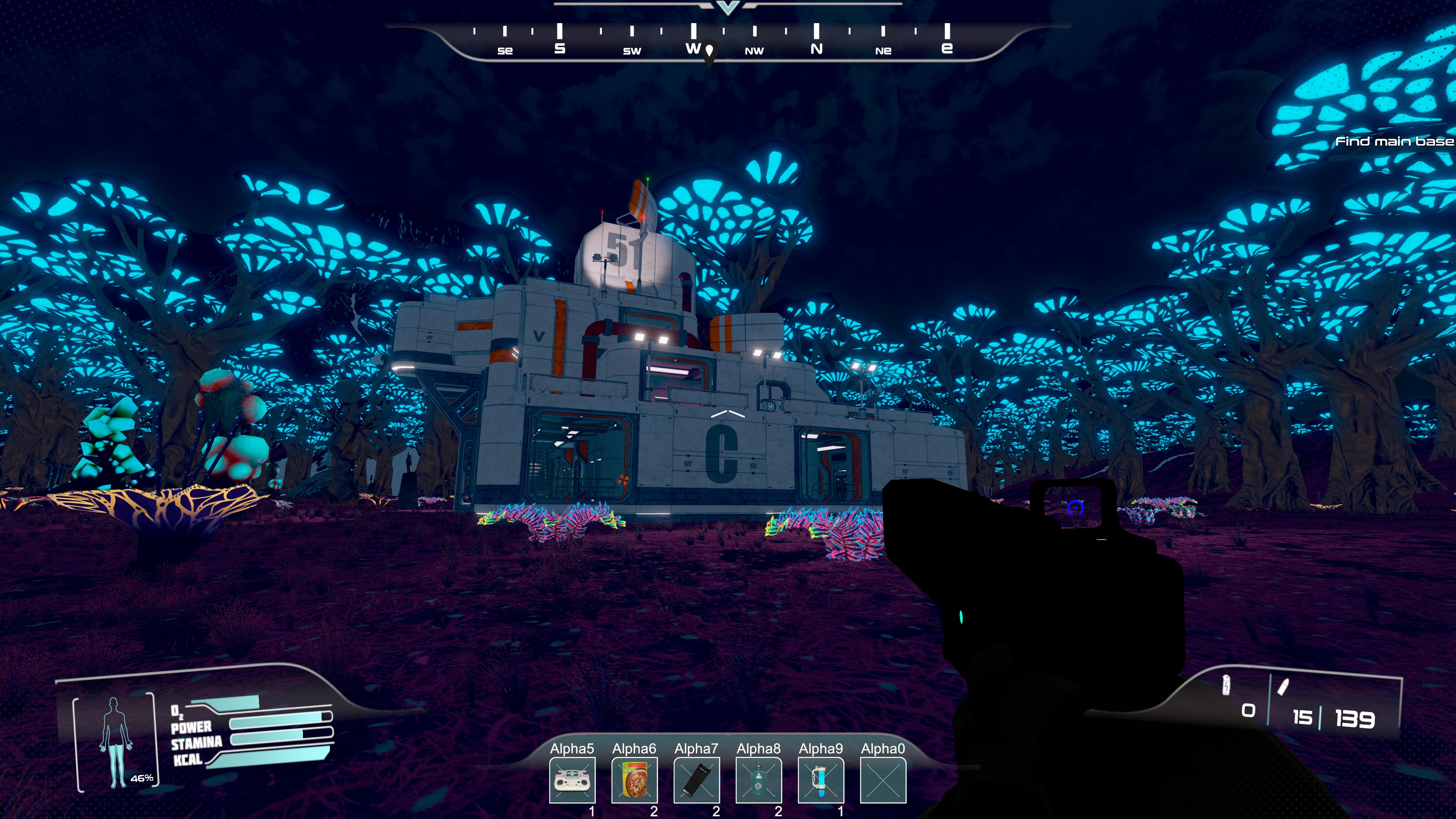 The title screen and character selection all looks like standard science fiction fare, but as soon as you start the game proper you see garish colours, nightmarish monsters, and strange foliage everywhere. Dotted about the crazy planetscape are a number of human-build buildings which at least mostly look interesting from a distance, but up close reveal low-resolution textures and boring models. It’s like some sort of LSD-induced dream of Mars while roaming about a deserted airport. 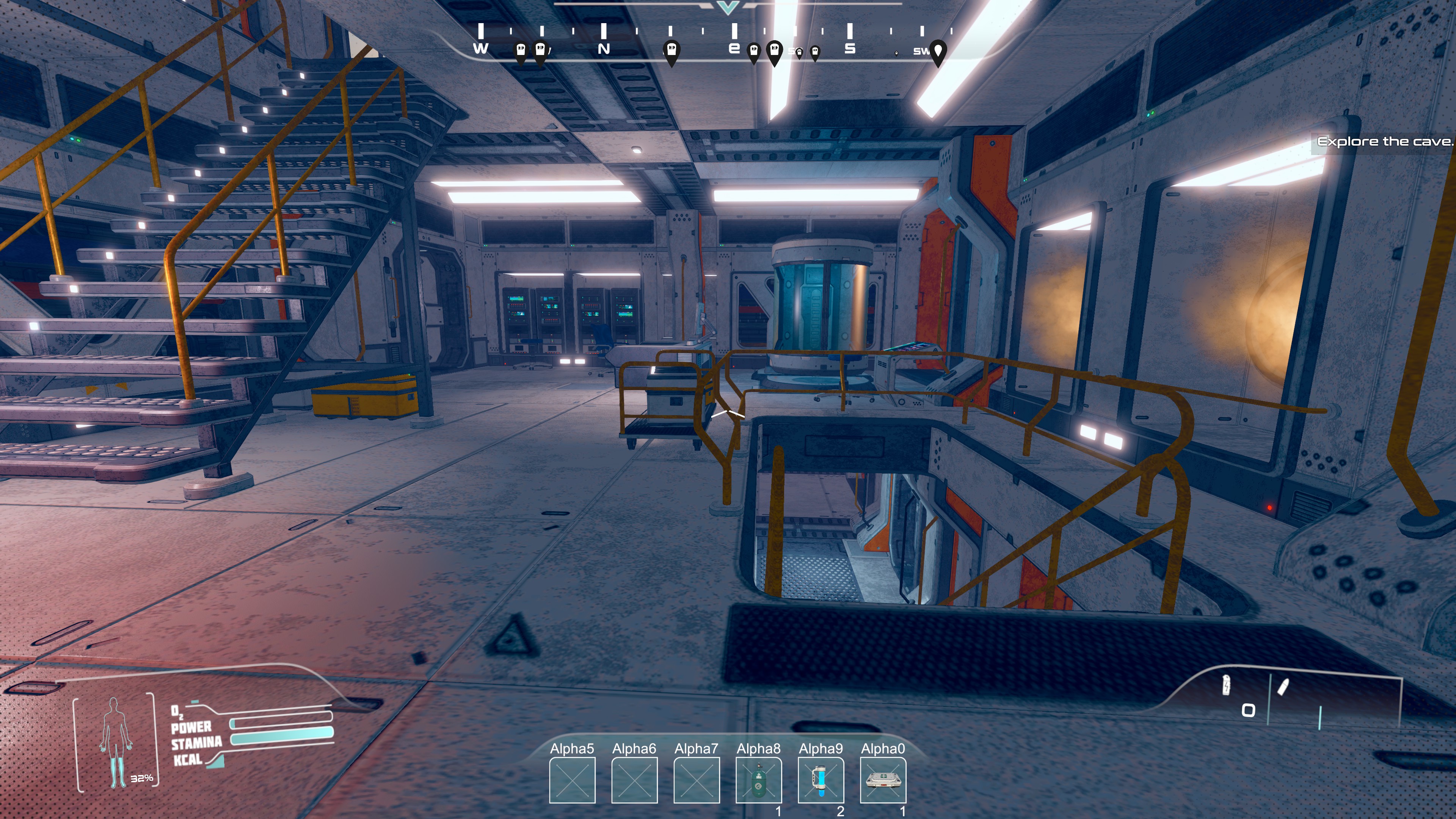 To add further insult to the beautiful planet and its wonderful indigenous life, various graphics anomalies occur frequently, too. LoD issues abound, making it not unusual to see large boulders move as you run towards or past them. Distance fog at sunset (or sunrise?) flickers terribly in 4K. And clipping issues are prevalent, destroying the sense of immersion.

The game’s interface is substandard, too, with frequent errors in spelling and grammar and poorly translated English. It needs some significant quality of life improvements, too, such as ensuring tooltips work consistently, adding information on ground items so you can tell what you’re picking up before you pick it up, reliable settings that don’t require multiple clicks to achieve the desired change, and informational alerts and feedback, making it more obvious when you deliver a successful melee attack, or telling you what’s killing you when you’re taking damage. While inventory stack sizes are reasonable, there appears to be no way to split stacks, which is a must in these sorts of games. Oh, and looting yet another “Random Chest” just doesn’t feel very engaging. 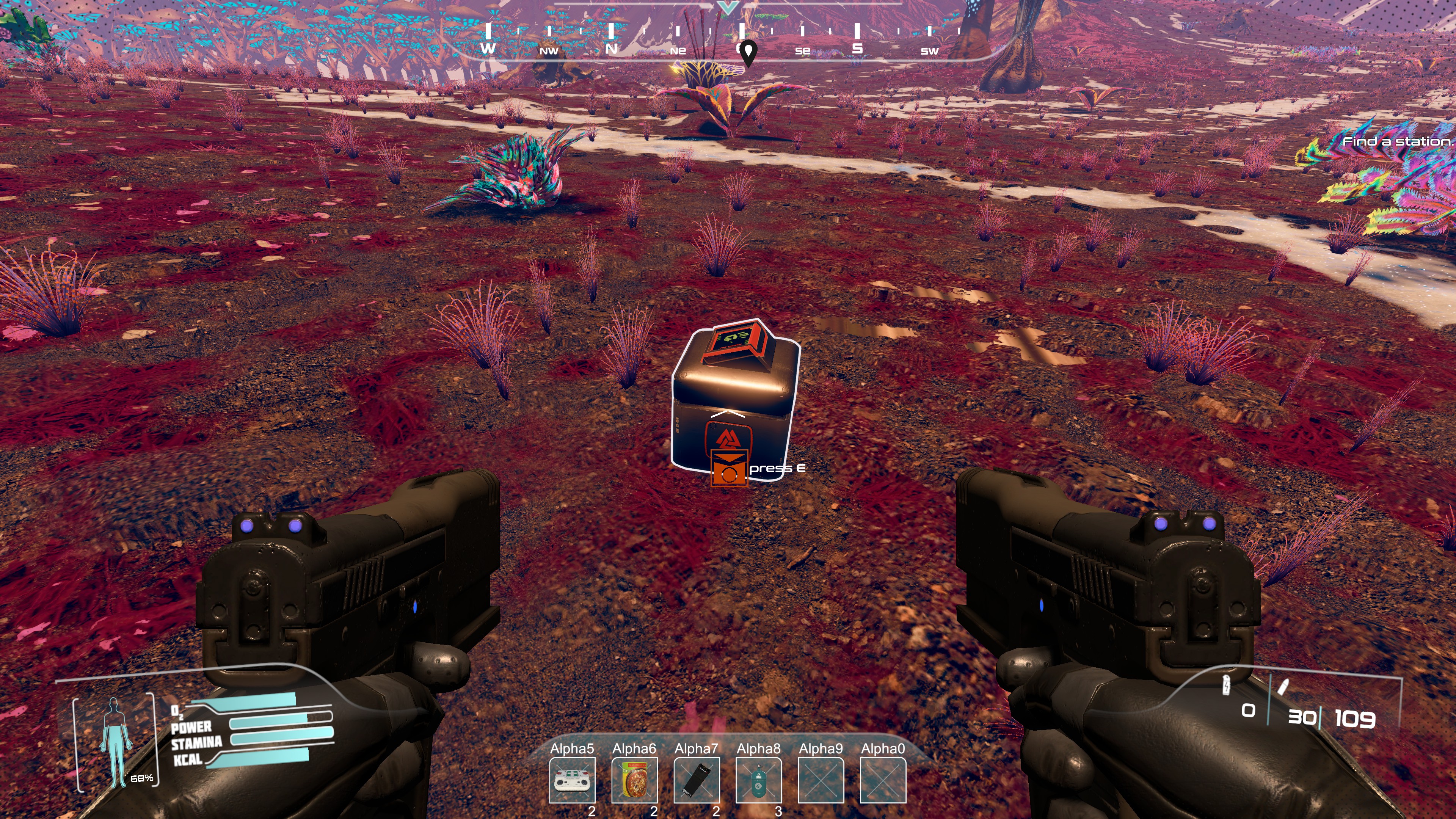 The game’s audio is similarly divided in quality. The music is excellent, with a really atmospheric electronic ambient sort of vibe happening. I don’t think there are very many tracks, but what’s here is really good and fits the game exceptionally well. Atmospheric sound effects are great, too, with wildlife sounds really adding to the feeling of exploring the lush alien jungle. But attack sounds are mostly terrible, with loud, obnoxious, and repetitive sound effects that made me want to turn the volume down in spite of the music and atmosphere. I hope these will be reworked before the game leaves Early Access.

Nibiru has enough issues to cause considerable frustration. Some of them are the usual sort of Early Access bug, which is expected at this stage, the worst of which was an issue where loading a saved game would frequently crash. Given that loading times often exceed two minutes, you can imagine how frustrating this one could be. Thankfully it appears to have been fixed in the latest alpha build. 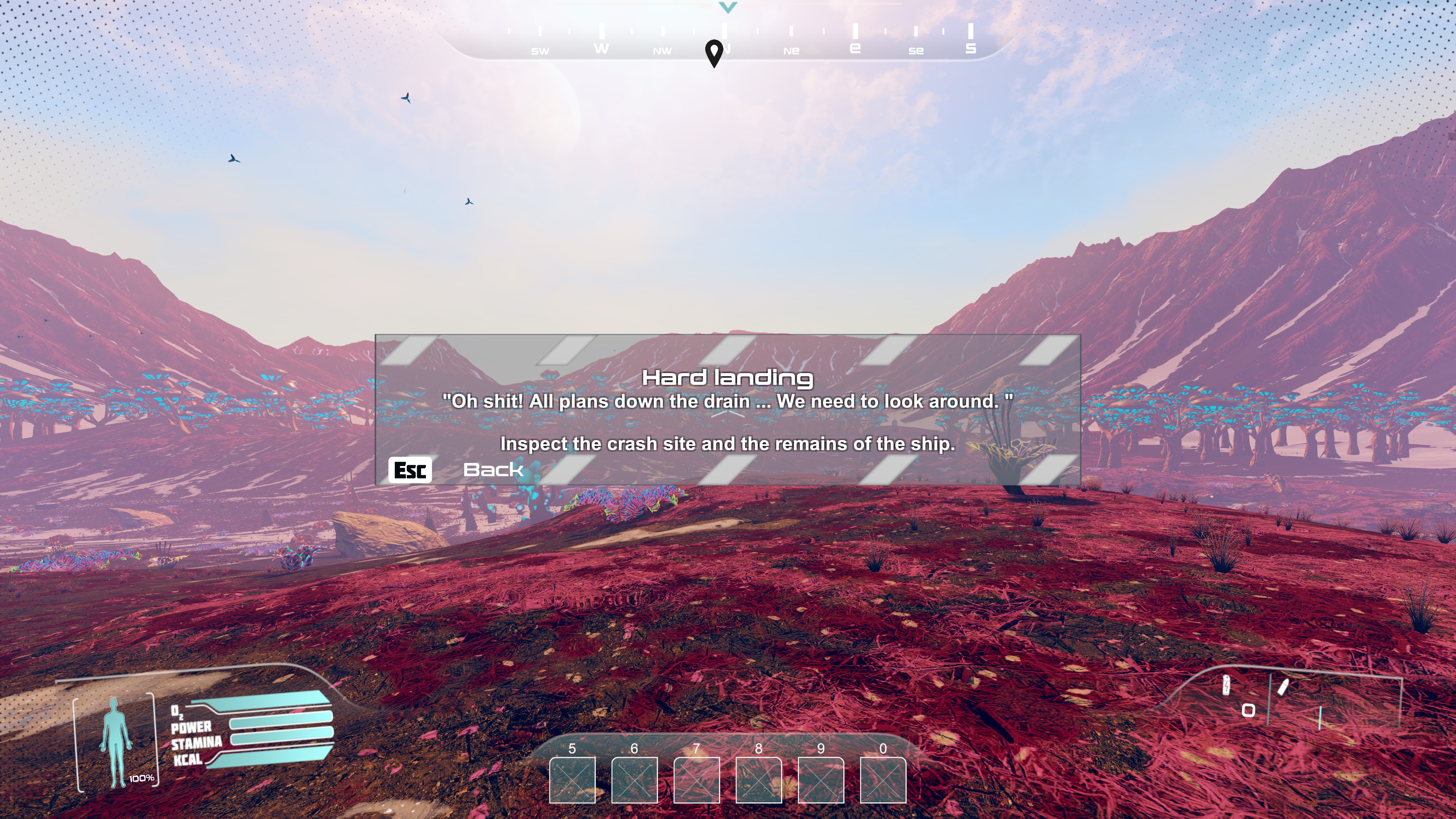 A couple of other issues appear to be working as designed, and it’s these that I take more seriously. I already mentioned the concept of the harvesting tool requiring ammunition to work, which is nearly a show stopper for me. But there’s also a host of other problems that, taken together, ultimately stopped me from playing after only 10 hours or so.

There’s no way to pause or disable the power generator, so the most resource-friendly way of running it is to feed a single unit of fuel into it, do what you need to, and then feed another in if you still need more power. It’s needless micromanagement that could be fixed with a single on/off switch. It’s silly that I throw out my old oxygen tank when it’s empty, and need to craft another from Aluminium ingots whenever I want air. It’s far more time-friendly to not bother refilling suit power or oxygen, and to simply die and respawn with half of each. I imagine as time goes on this equation my shift further towards the playing properly side, but resource harvesting and crafting was so tedious that early on, at least, I quickly found it was better to just die — although the unlimited lifetime RIP markers make the map and compass a bit hard to use after a while!

The store page talks about improving survival skills and adjusting them for “your style of survival”, but there isn’t really much choice; you just spend points on the things you have to for the quests, and for whatever else interests you outside of that. But variation is very limited, and there aren’t very many skills available. The whole skill and character system needs a massive upgrade to be a worthwhile addition to the game, I think. 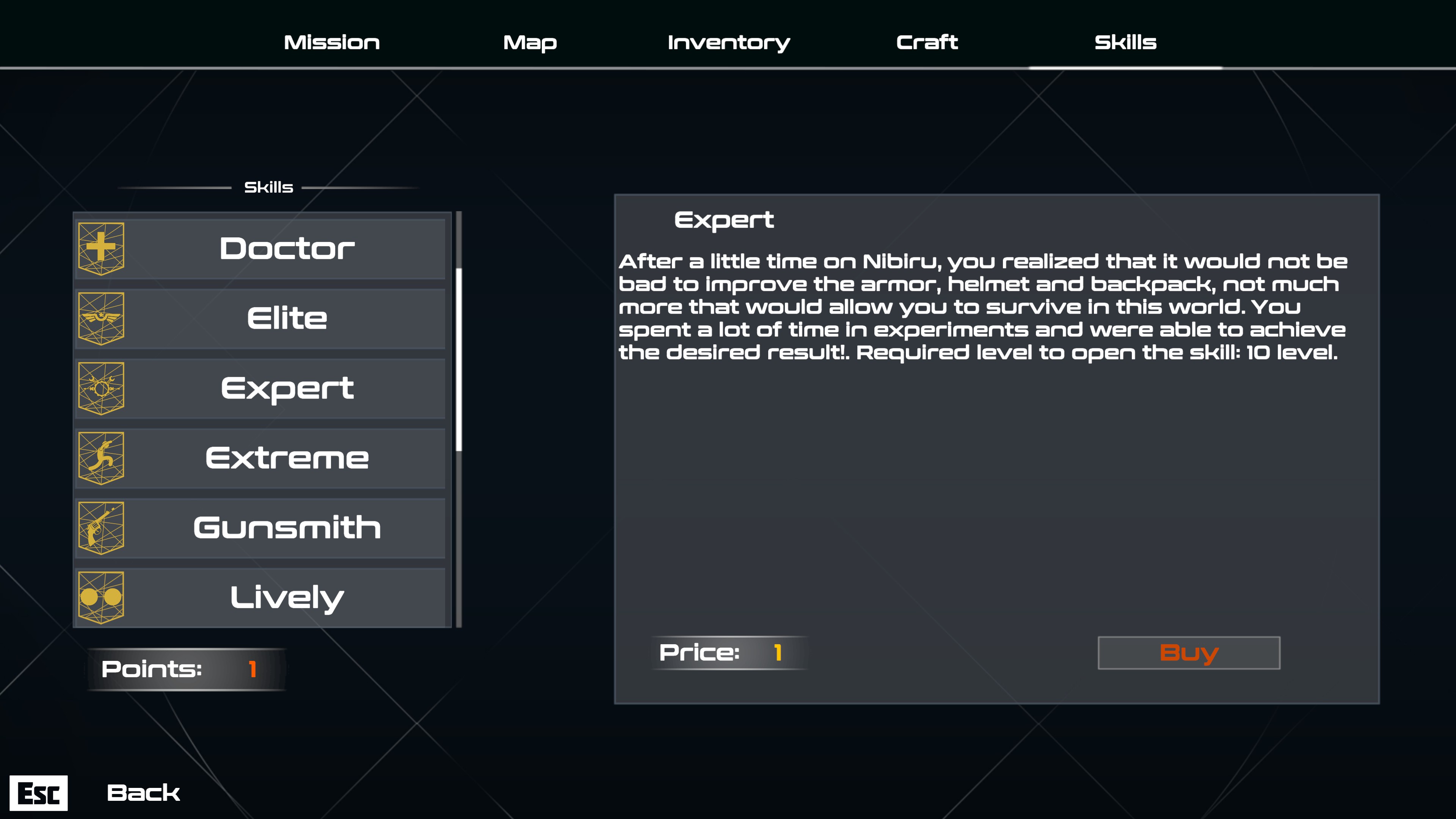 While I did get some enjoyment from the time I spent in Nibiru, after the first few hours it started to feel like a chore. While it has quite a few bugs and interface issues, more important for me are some of the questionable design decisions. The game is harder than I feel it should be, but I feel like I’m fighting the game design rather than the game world and its inhabitants.

That said, it has some great graphics and music, an interesting environment and creatures, a reasonable price point, and a good feel to it. It’s just very rough around the edges.

Pick it up if you’re really hard up for another science fiction survival-crafting game, but be prepared for a hard slog and considerable frustration.

If you’re interested in playing Nibiru you may be in luck! Ask JimDeadlock on our Discord server and he may have a free key for you, if you’re quick!