Victory Project is a recent anime visual novel release from developers, 33ParadoX, published by leaders of the genre, Sekai Project. From what I can find out about it, it was originally set for release on Steam, but it was canned by Valve for containing some sort of content that wasn’t permitted on Steam. Having played through it fully and reached a couple of alternate endings for a couple of characters, I think this was a mistake on Valve’s part; the game’s protagonist does seem likely to have engaged in sex with underage girls in his backstory, but the game itself contains nothing like that. 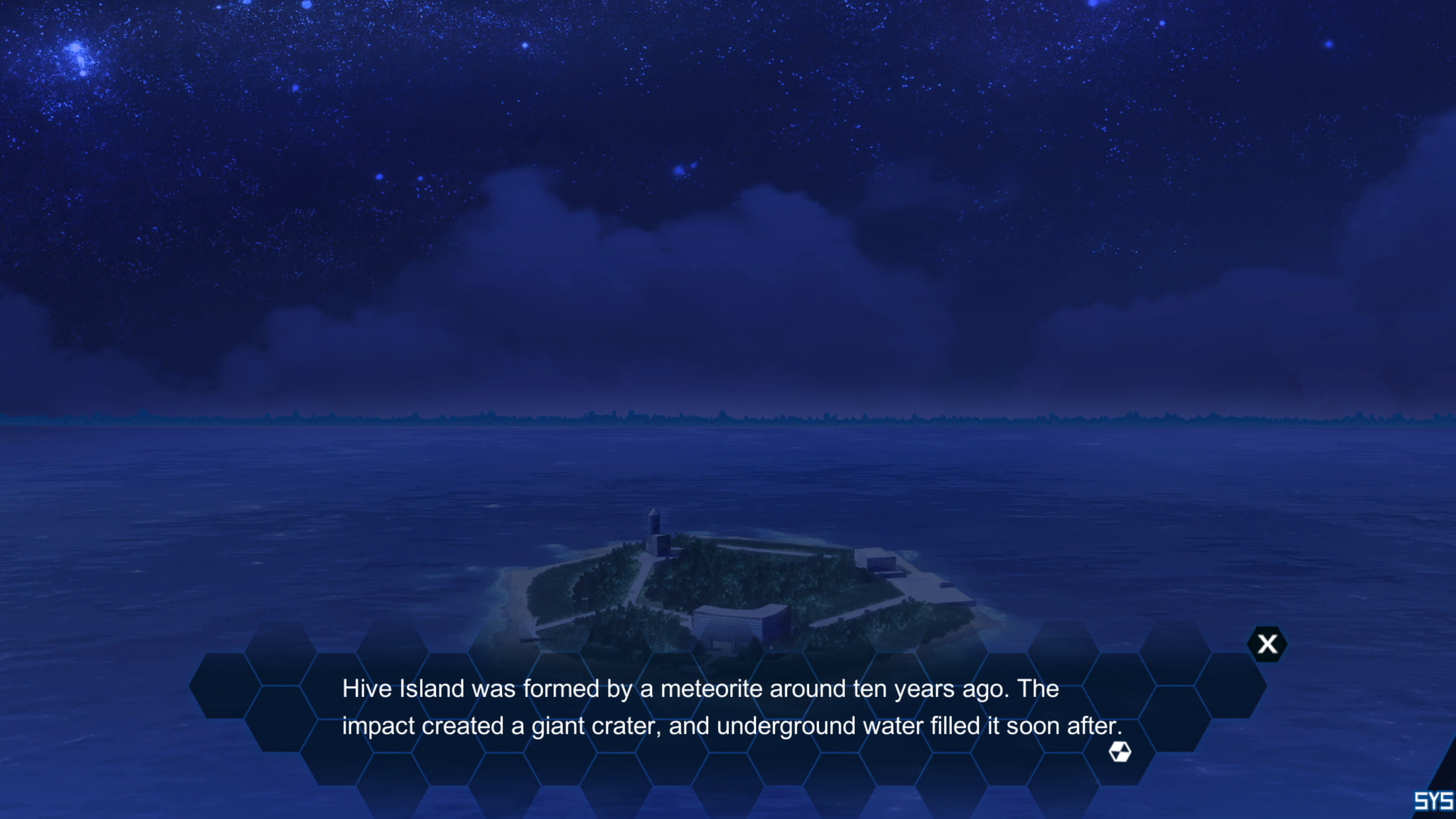 The game tells its story from two points of view: that of Ramon, the disgraced criminal CEO of the Victory Project company, sent to jail for crimes related to money laundering; and that of Durian, a loli-like flat-chested 19-year-old test subject of The Hive, a military-run orphanage positioned on an island in the middle of a lake created by a large meteor strike.

The story begins with Ramon, handcuffed, heading to The Hive after being strangely pardoned, under the condition that he stay as a “volunteer” on the island, doing whatever is required of him in service to The Hive. He meets the manager of The Hive and is promptly told to “just pretend you’re a security guard”. While exploring the island he quickly finds some oddities, not the least of which is that it’s inhabited by a number of strange and attractive girls and young women. 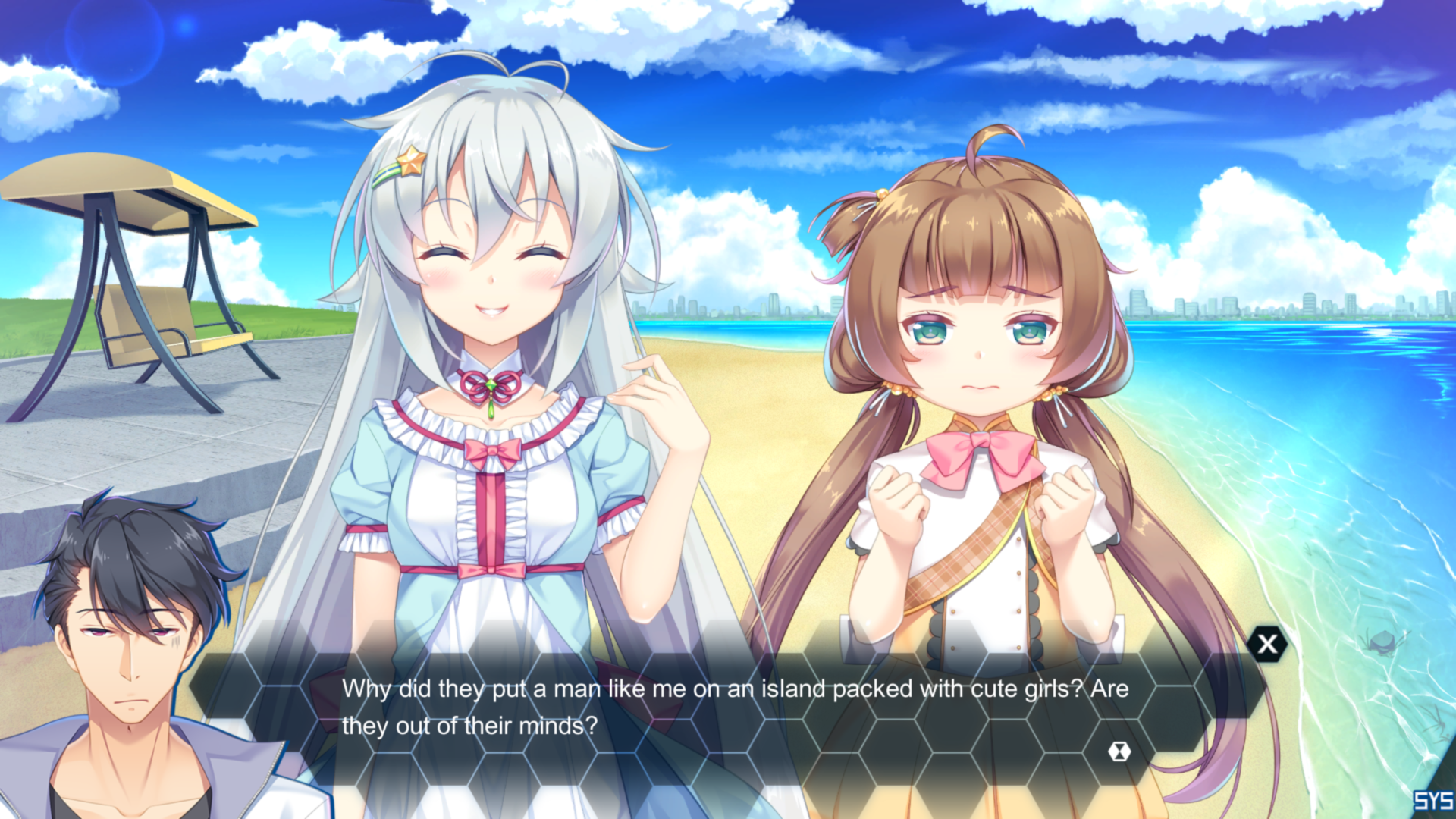 He soon meets Durian, who very rapidly forms a strong bond with Ramon, who is helpless to resist her teenager’s charms. As Ramon fights his instincts and tries to do the right thing with Durian, he also discovers that The Hive holds a terrible secret.

The game has a number of decision points, but many of them seem to either change very little or, in some sections where the game advises you to save, end in sudden death. There’s only one real path through the story, leading to a single ending. There are, however, multiple epilogues — at least good and bad versions for four of the girls — but each of these is displayed sequentially after the main plot is completed, depending on some of the choices you made as you played. The major decision points for some are easy to guess (e.g. Bud and Bubbles), but others are much less clear and require considerably more investigation. 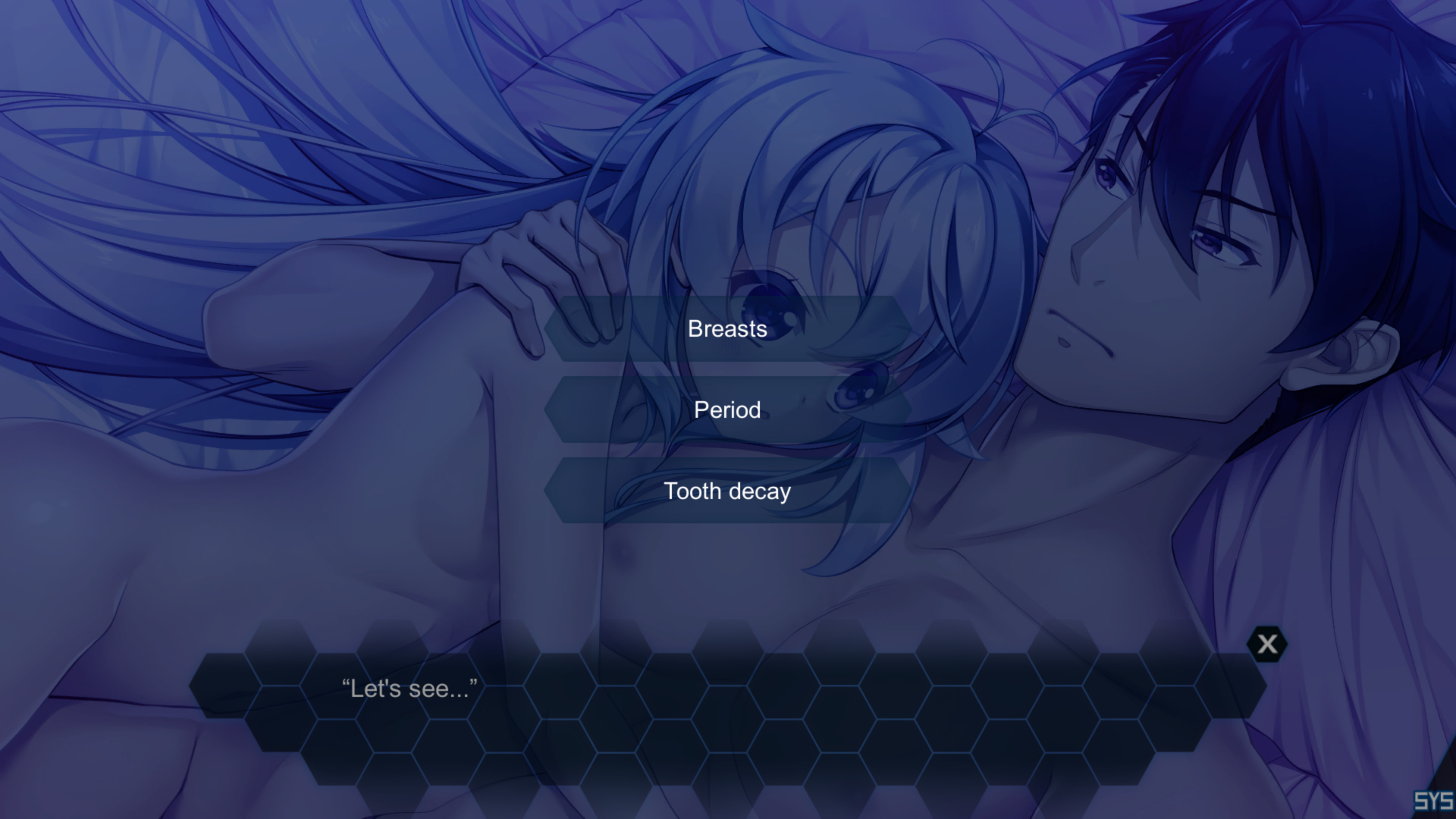 The writing is a little weird. It’s been translated to English from Chinese, I believe, and the English is exceptionally good, grammatically speaking, when taken on a sentence-by-sentence basis, but sometimes when the sentences are put together to form a larger block of text, it doesn’t make a whole lot of sense. A few sections had me wondering what the writers were really trying to convey. This was initially evident in some of the early sections with Durian, but continued in patches throughout the game.

Though the game is of only moderate length — since it’s not on Steam I don’t have anything measuring my play time, but I think I spent about 10 hours on my first play through — I found it to be a bit long winded at times, made worse by some lengthy pauses in the interface, but the story it tells is mostly solid, interesting, and entertaining. I was surprised in a few places by what seemed like genuine wisdom, too; there are some gems such as, “Being good is just a way to find peace after losing something.” 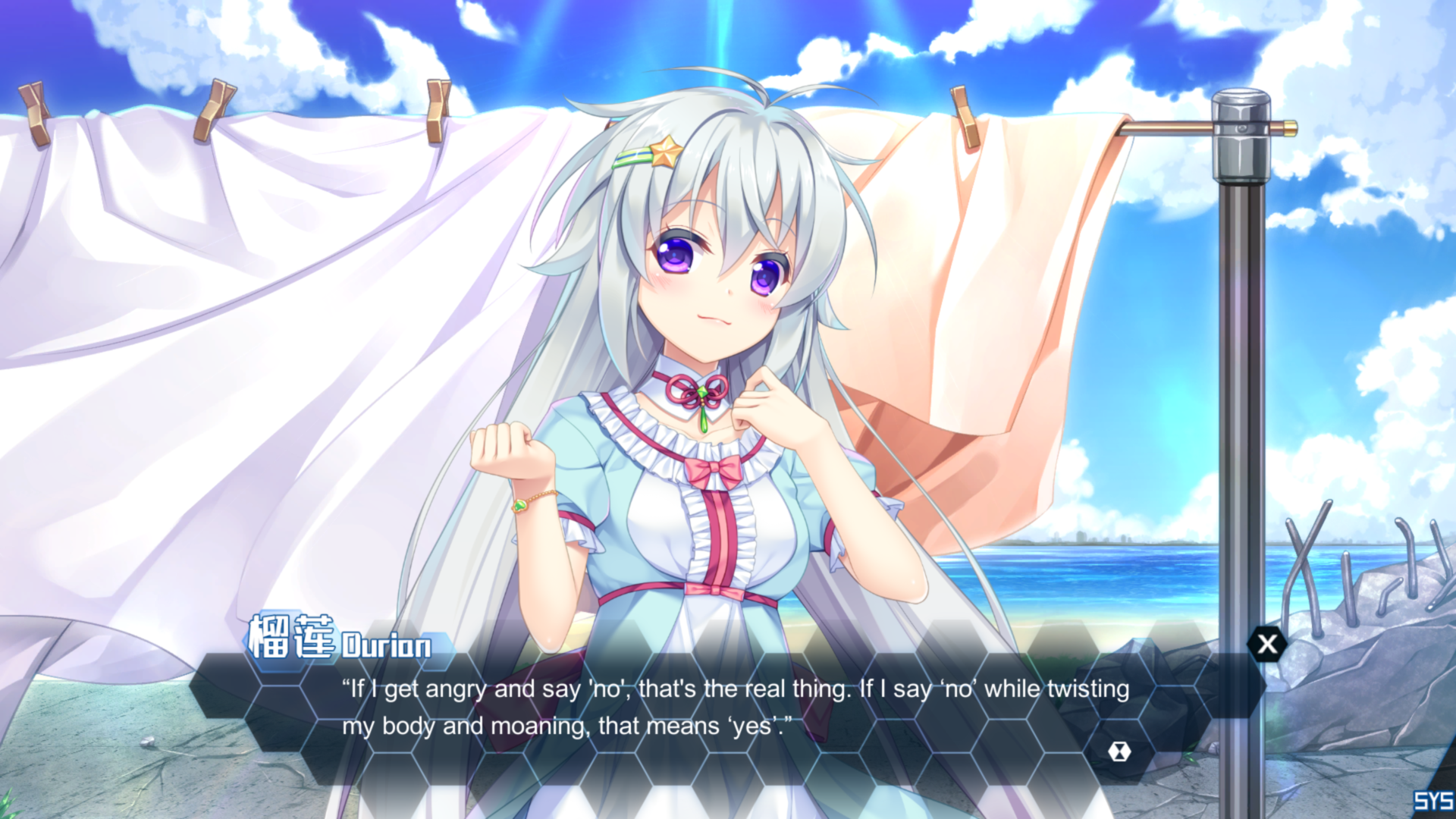 There were a few small plot holes or other issues, such as a character talking about Lotus’s piano playing, when she actually played the violin; no resolution for Bubbles outside of Bud’s bad ending; some characters not having names when they really should, such as “my employee” or “the politician” (thankfully the latter was eventually named, but it just seemed weird they didn’t call such a public figure by name earlier); and some characters knowing more than they should according to the story in some situations. I also found some of the personality changes and actions of some characters occasionally unbelievable, especially starting in Chapter 7. I felt I was getting to know some of the characters and they just didn’t behave as they had earlier in the game.

While the interface is pretty standard for the genre — a semi-transparent text box over large 2D paper-doll sprites and static hand-drawn backgrounds — the developers have done a great job with the skin to make it fit the game well. The hexagonal pattern used throughout is obviously relevant to The Hive, and everything looks and feels sleek and smooth. The menu is accessed by a click on the icon in the bottom right and is otherwise completely hidden, and the interface can be entirely hidden or shown with a right click.

All of the standard sorts of features are present — multiple saves, text speed, skip options, etc. — except there are a couple of significant issues that make replaying the game in particular rather frustrating. First, you can’t save when a choice is displayed on screen. This makes returning to decision points far more painful than it should be, and requires the player to save often just in case. Second, the skip function doesn’t seem to work properly. Sometimes it skips all text, including unseen text, even when the “read text” option is selected from the menu, and it also often (but not always) stops skipping on a scene transition, meaning that you can’t just skip to the next choice. These issues together make replays to see all of the character good/bad epilogue versions rather unpleasant.

There’s also a hacking minigame that pops up a number of times during the game. This was interesting the first time or two, but I quickly reverted to using the supplied “Win” button to simply skip it, especially since the hide action seemed so unreliable. 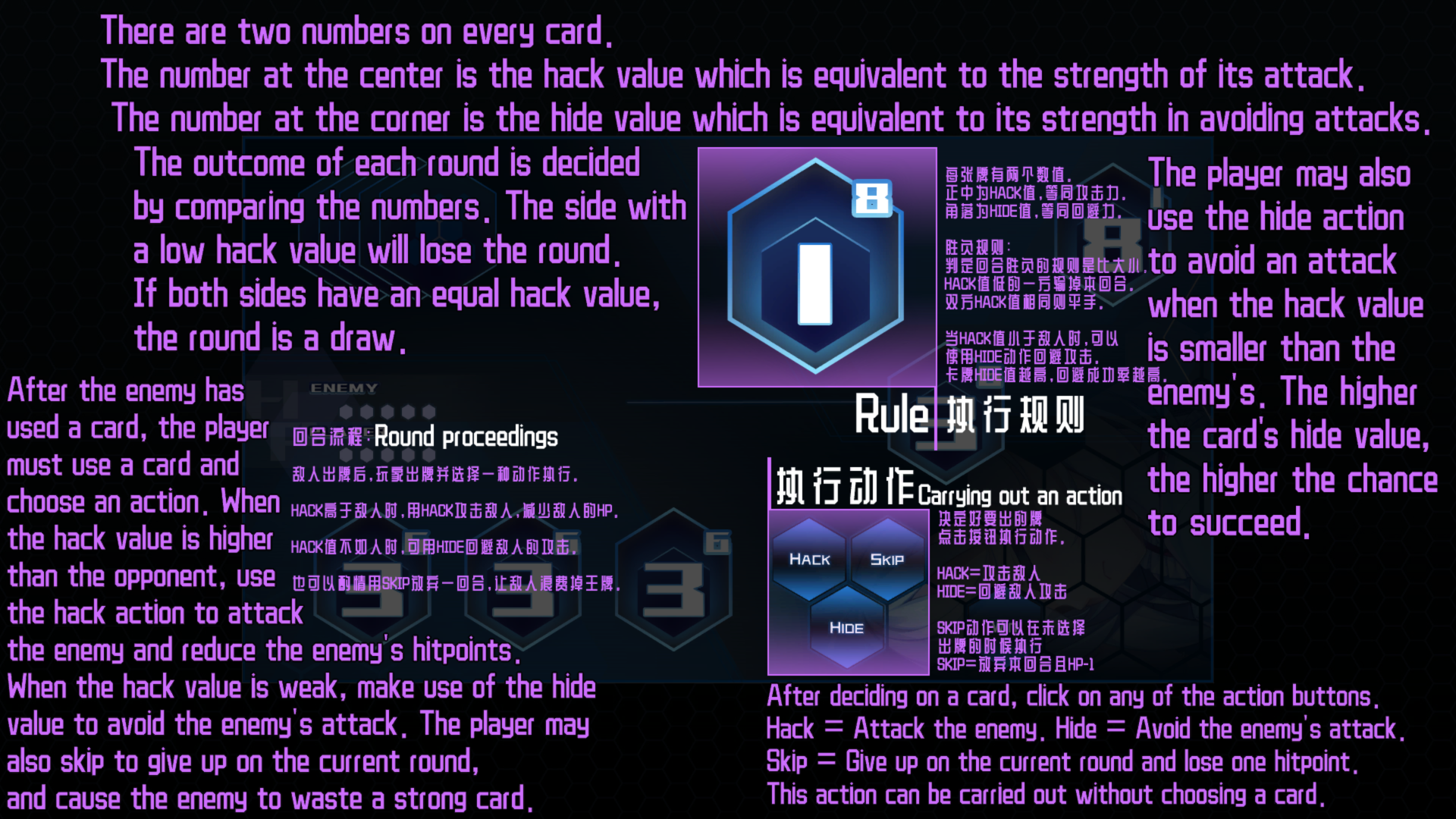 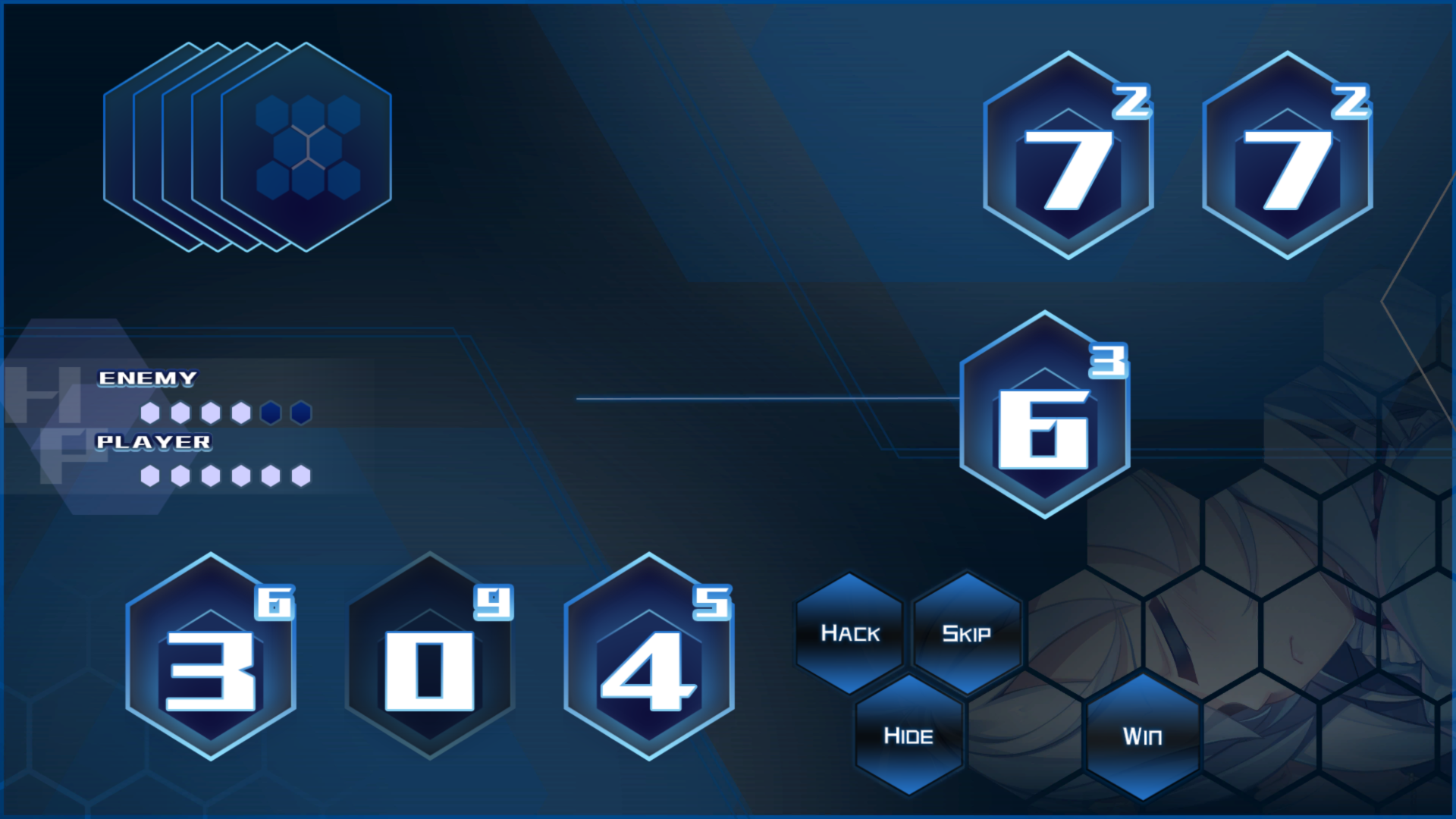 Finally, the interface seems very slow and unresponsive at times. Scene transitions and some other sequences are slow and unskippable, it sometimes takes multiple clicks to manually interrupt and skip a line of text, the hacking minigame is slower to interact with than it should be, and a number of lines of dialogue seem to have lengthy pauses after them. I’m not sure how much of this is due to the game being developed in Unity rather than a VN-specific engine — perhaps none of it — but I did find it frustrating at times. It does look great, though!

The first thing that I noticed about Victory Project was the fantastic title music. This has a slow beat and great piano melody that reminded me a lot of Teardrop (Massive Attack). It’s used in a few places in the game, and each time I heard it it gave me a shiver. Other tracks aren’t as memorable, but there’s a good selection and I didn’t find any of it annoying.

The game is fully voiced in Chinese, including the two protagonists: Ramon and Durian. This is a bit unusual for VNs, which usually leave the protagonist unvoiced, but perhaps the decision was made because the story alternates between the two characters a number of times, and it would have been too quiet without either of them speaking. I have no idea at all about Chinese, but at least volume normalisation was good and no one sounded out of place.

Backgrounds are nice, with plenty of detail, and character art is really good, though sprites show only a few emotions, and are not animated at all (no Live2D, for example). CG images are mostly great, too, but the sort-of chibi-style was used a bit much for my liking. I thought most characters fit their descriptions and behaviour well, except for Bai Hua, who could barely have looked any less like his name or revealed background would have suggested! I have no idea why the developers went for a western-looking character for him.

The sex scenes are very tame with no censorship, but no need for it either. 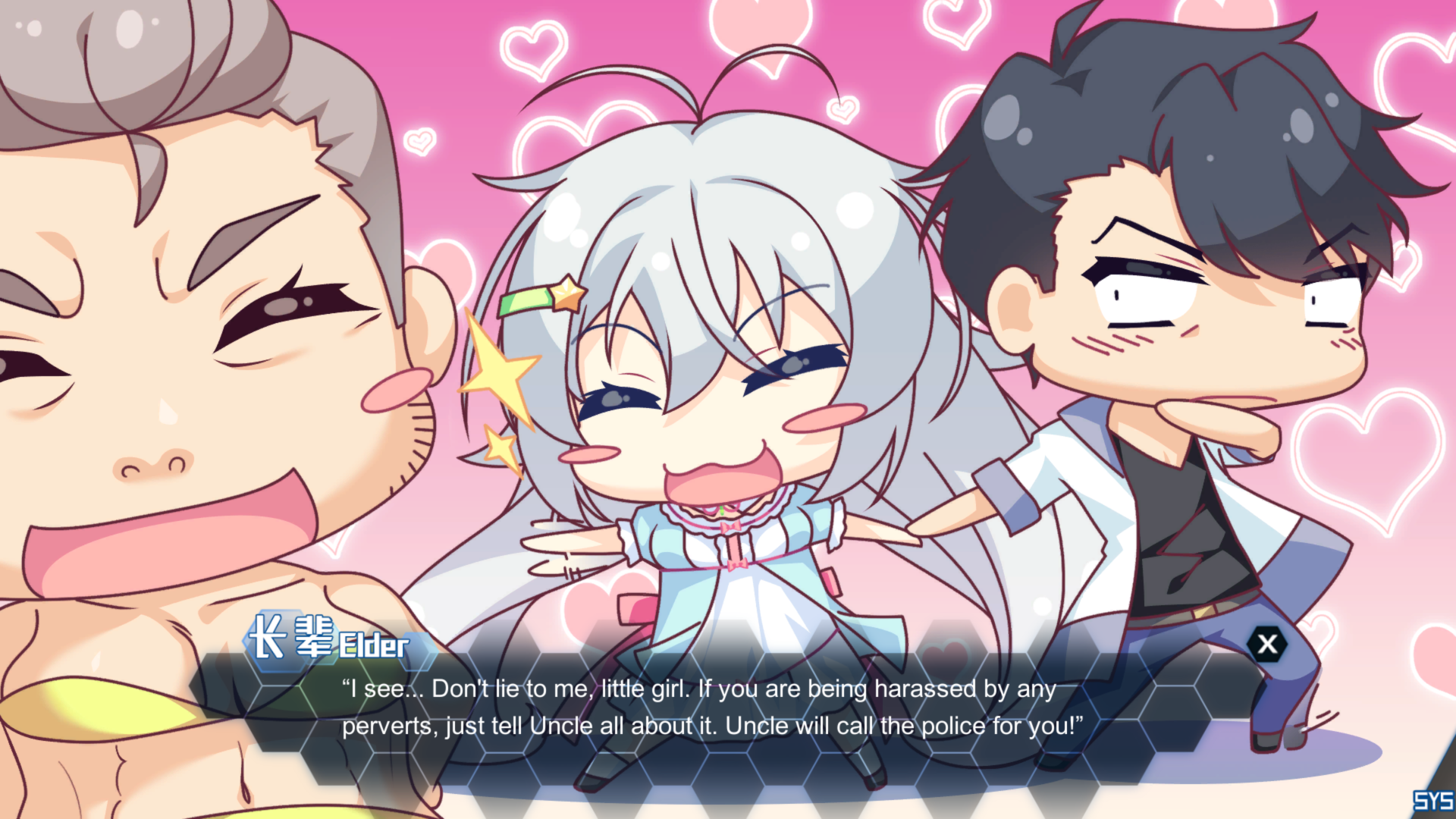 Victory Project is a solid, but relatively short, VN with a very interesting setting and some fun characters. It has some light sex scenes and nudity, some violence and gore, and some pretty heavy discussions about morals, all of which it handles in a mature fashion. The translation is mostly great, but I was left feeling a bit confused in some places. Similarly with some of the rapid plot diversions and character personality changes, which I think ruined the story a little for me. The art and music are excellent and fit the setting well, and it’s fully voiced, too!

It’s a shame it’s not on Steam, but it’s worth a go, regardless.