It adds a lot to traditional Minesweeper, but somehow loses something along the way.

Minesweeper. I first played it almost 30 years ago. A friend and his mother let me join in their little home competition to see who could get the fastest clear score on each of the three difficulty levels. I thought I was good at it, but my high scores never stuck around for long. (To be fair, neither did theirs, at least in the early days of the competition.) Since then I’ve played a few different versions of it, including a recent ecchi version that adds five lives to reduce the pain of wrong guesses when levels devolve into a virtual coin toss, as Minesweeper levels are wont to do, and then rewards completion with some lewd anime-style art. It’s fun when I want something that doesn’t require too much investment.

Demoncrawl, a PC and Android game from indie developers, Therefore Games, takes Minesweeper and encapsulates it in a sort of faux-RPG wrapping, then throws literally hundreds of items, modifiers, enemies, and the like at the end result, turning it into a Rogue-like puzzle RPG. While the Android version is free to play, with in-app purchases to unlock some functionality, the PC version on Steam is decidedly more expensive up front, though the whole game is unlocked. It’s this latter version that I’m taking a look at here.

The core gameplay is Minesweeper, so if you’ve played that you’ll be able to dive in without pause and start to nut out all the stuff that’s been added over the top. For anyone that hasn’t played it, I’d suggest that you should; it’s a great classic puzzle game that trains simple arithmetic and pattern recognition and requires both concentration and speed.

The basics of Minesweeper are simple. First, take a two-dimensional board divided into covered squares, with a certain number of squares hiding a mine, and each of the other squares either empty (if there are no mines next to it) or displaying the number of mines in the eight squares adjacent to it. A left click reveals a square, while a right click marks it. Your goal is to mark the location of all the mines without revealing any directly, as that would cause instant death (game over). The original game simply had three pre-defined board sizes and maintained shortest completion times for each size — the faster the better.

Demoncrawl includes a Classic mode that allows you to play something very close to original Minesweeper, but the core gameplay is the Quests mode. This provides a brief tutorial, explaining the basics of Minesweeper and providing a bit of information on some — but not all — of Demoncrawl’s new mechanics, as well as a series of five quests, each comprising 10 levels of increasing difficulty (I think; I haven’t yet unlocked them all). Only the first quest — Glory Days, in which you’re a messenger delivering an important message for the King — is initially available, but upon completing that you’re given the option of unlocking the second quest with in-game currency, which you earn through play. 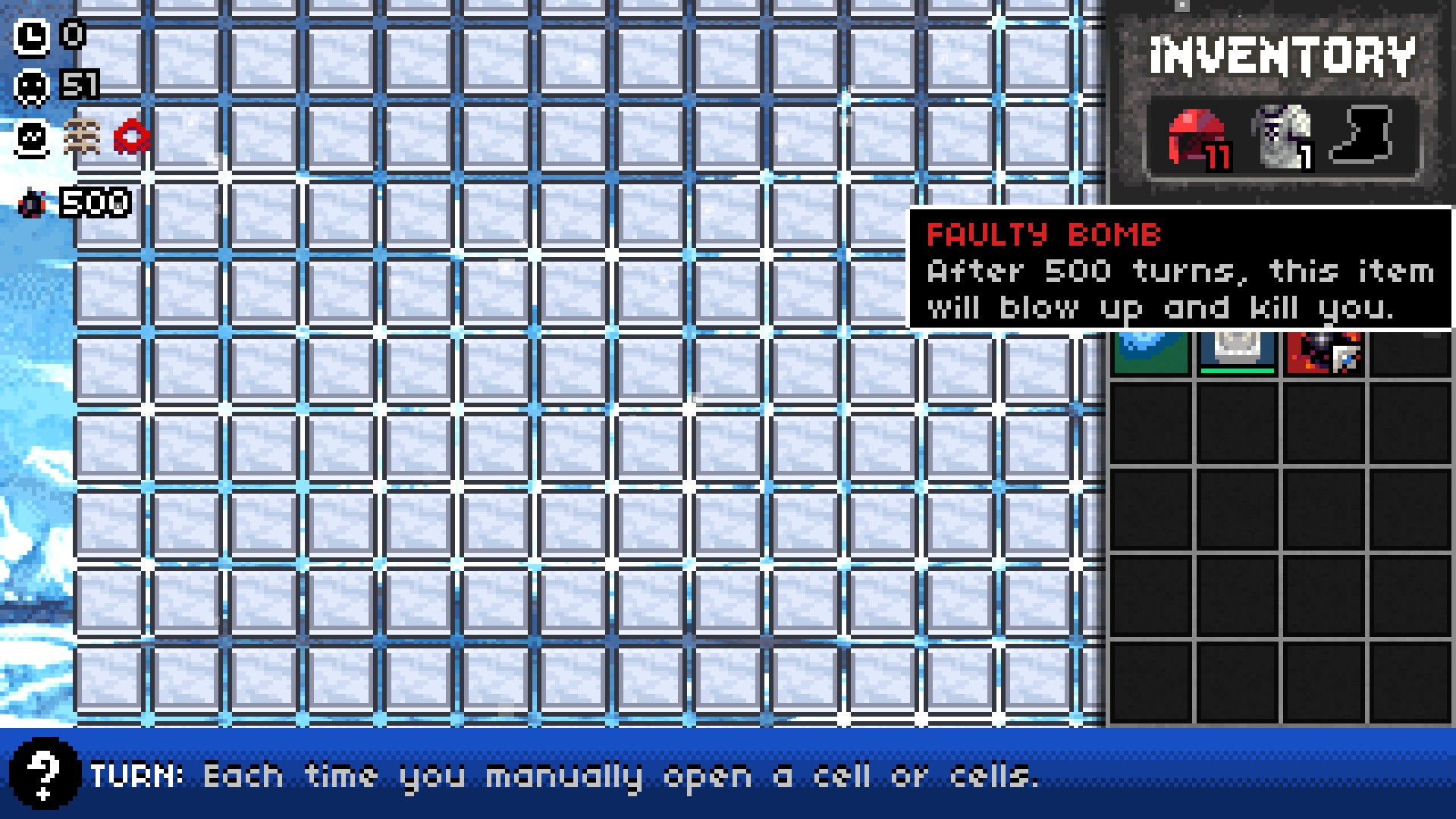 While Demoncrawl extends Minesweeper significantly, I think it’s fair to say that it makes only two core changes to the basic formula: you have a number of lives now, as well as two types of armour / defence to protect against damage, rather than a single mistake causing instant death; and mines are replaced by monsters, which cause damage based on a number of factors — so instant death is still possible, but it’s much more unlikely. Other changes are less significant, such as varying board sizes, while most of the gameplay changes are actually additions to classic Minesweeper: inventory items, gold, chests, experience points, masteries, and so on.

It’s in this regard — the additions — that Demoncrawl both shines and causes the most frustration. The sheer number of passive, active, and consumable items; masteries; and other extensions to basic Minesweeper is huge. The codex, which tracks many, but not all, of these modifiers, currently stands at 518 entries, and that doesn’t include masteries or some other game-changing unlockables, or any of the aesthetic additions such as avatars and inventory skins, either. I’ve played a little over 15 hours so far and have seen fewer than half of the codex entries, and only unlocked a couple of dozen extra items, masteries, and aesthetic choices. It’s madness! 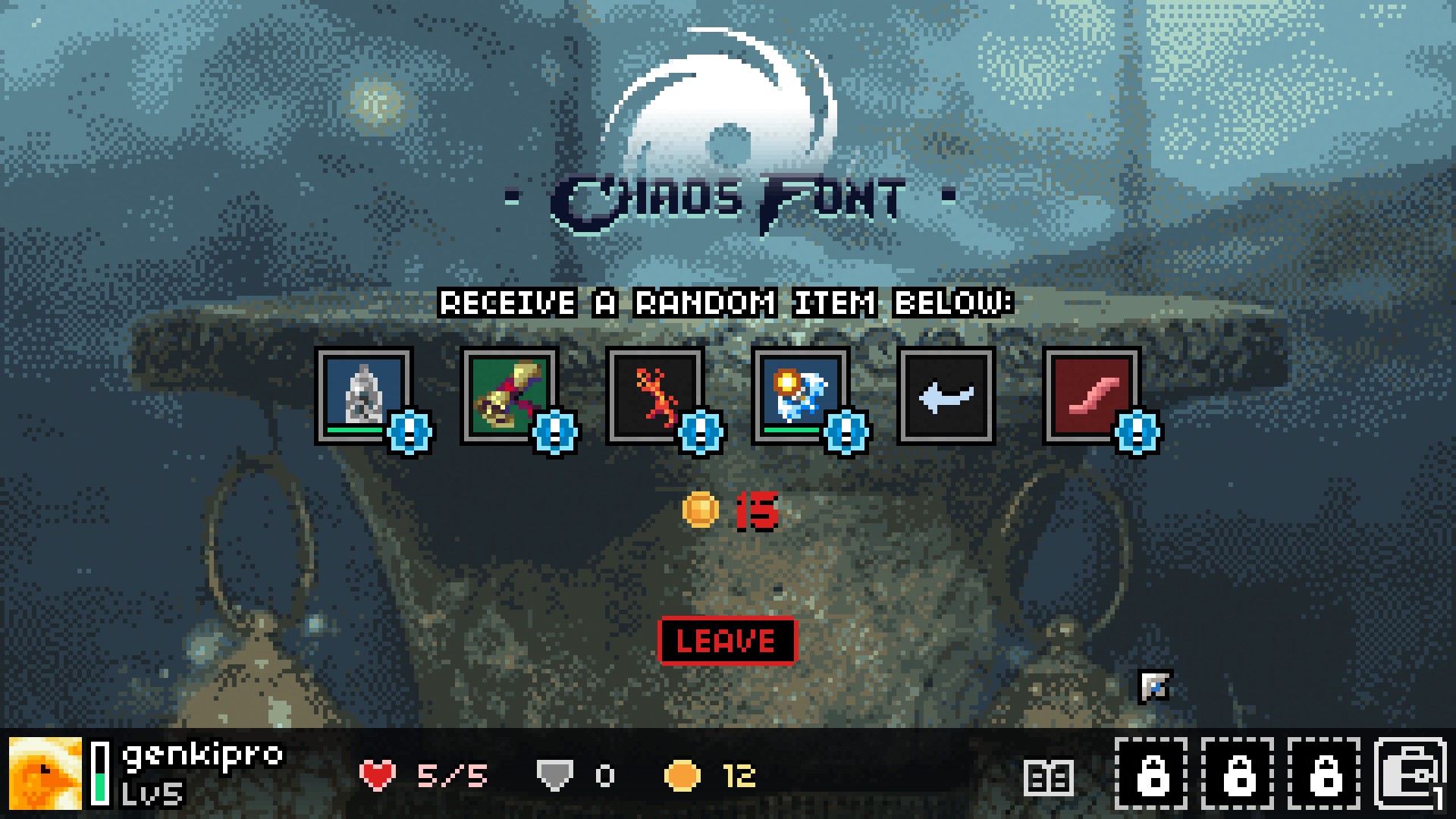 With this huge variation, however, comes a massive dependence on the RNG in determining the outcome of any one quest run. I believe the setting and size of each level is fixed for each quest, but these levels may be interspersed with a number of other extra encounters, such as teleporters or shops, and obviously the levels themselves are procedurally generated — the monsters aren’t always the same. And, importantly, the items and other modifiers you encounter as you play — all of those 518 codex entries — are pseudo-randomly assigned, making each quest attempt very different to the last. So while this adds to replayability very significantly, it also provides for some extremely frustrating quest runs that are based almost entirely on the outcome of the RNG, with very little dependence on the skill of the player.

It’s this procedural generation, combined with permadeath and the various unlockable items in the Token Shop that provide meta-progression, that makes Demoncrawl really feel like a modern Rogue-like game, even though it’s not really anything to do with dungeon crawling. And you could certainly argue that RNG-dependence is core to any Rogue-like game, but here it often feels overpowering, as if you’re just going along for the ride. Minesweeper’s inherent devolution of many levels into a virtual coin toss — you often simply don’t have enough information to do any more than guess at a square — is here, too, but it pales into insignificance next to the effect of all the items, loot drops, stranger encounters, shops, and the like. 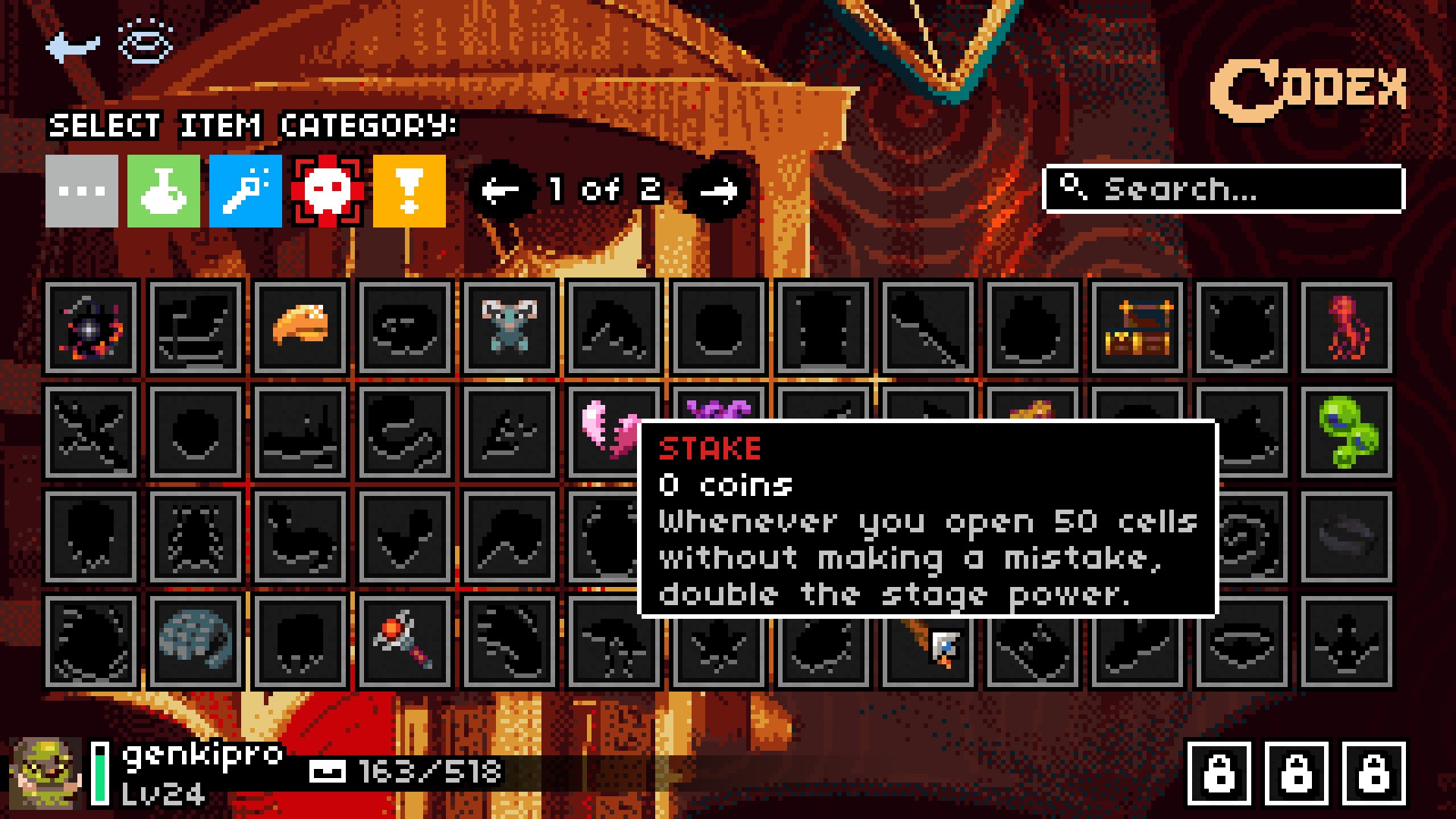 While I can imagine the pixel graphics used for Demoncrawl’s visuals might look nice on a 5.5″ phone screen, on a UHD PC monitor they look plain ugly! I initially tried fullscreen mode, but quickly reverted that, instead opting for a “Window Scale” of x6, which appears to be 1920×1080 or thereabouts; this gave a reasonable trade off between usable window size and legible text and graphics. I often quite enjoy pixel-graphic games, but for the most part Demoncrawl’s graphics make text and some other detailed visual elements quite hard to discern, to the point where it took me quite some time to stop clicking on the wrong cells — Spy mastery, I’m looking at you in particular!

In Quest mode the background graphics are animated with some nice effects, but window dressing such as status icons, avatars, and many of the item and monster icons often just look like barely distinguishable blobs of pixels. Some of the colours and overlapping items, such as gleaned numbers on marked cells, are often confusing, and tooltips where available are mostly useful, but on occasion they don’t pop up at all. 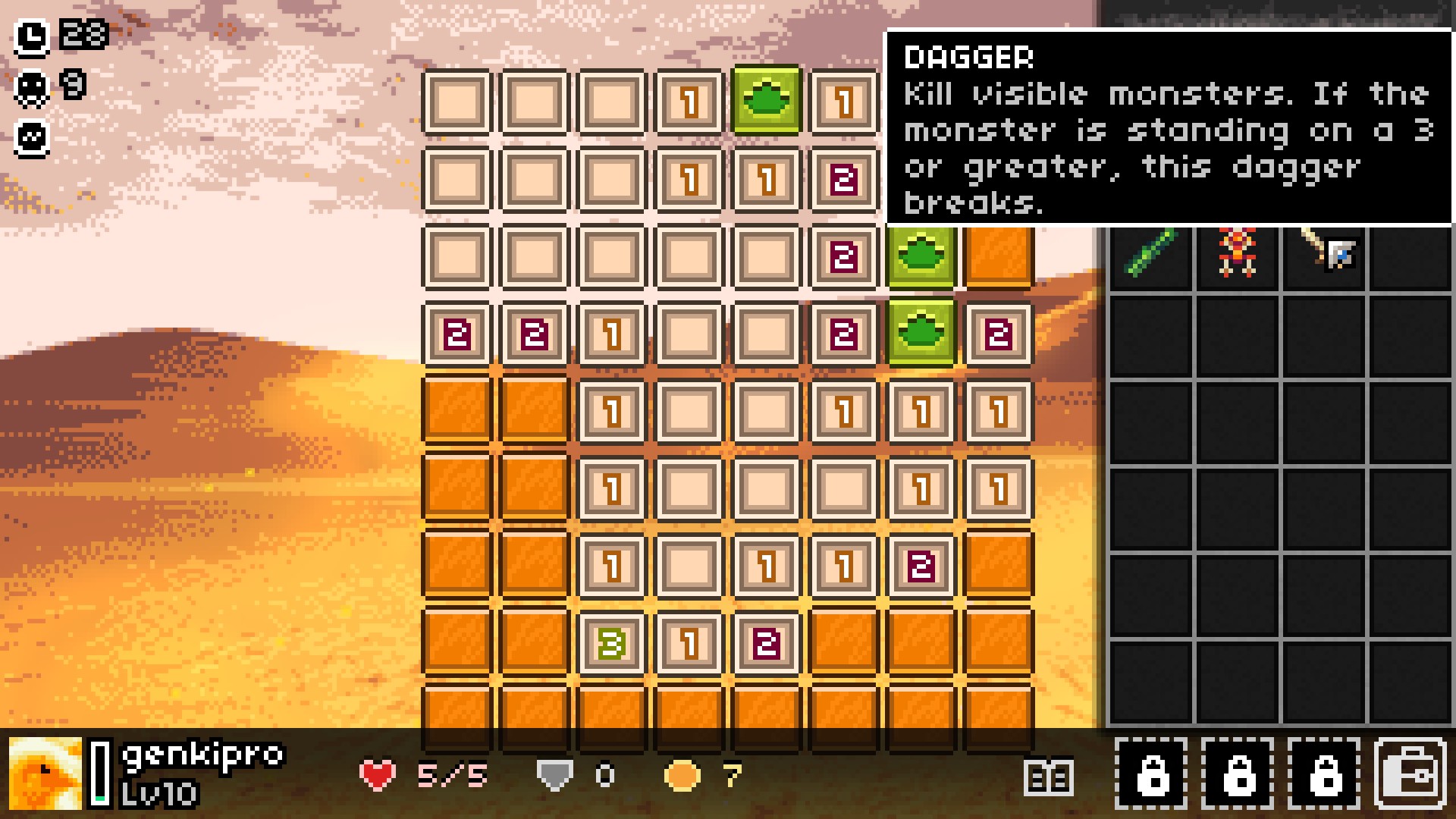 More information on a number of game terms would definitely be a good thing, too. For example, how exactly does “Trusty” work? It doesn’t seem to stop you having to guess on the first click, at least, but perhaps the game somehow guarantees this won’t reveal a monster? This is one example where I’d like to see more information made available in the game. I’d also argue that a number of descriptions should be reworded. For example, effects based on counters for “opening cells” actually seem to be based off the number of left clicks, rather than the number of cells opened — so a click that opens half the board is only counted as one cell. This in itself is fine, but it’s not clear from the description. Some item combinations don’t seem to work like they should — such as Golden Chalice when wearing a Royal Crown, though whether this is a bug or by design, I’m not sure — and equipping armour items also trashes existing items in the relevant slots, which seems silly; why would I throw them out when I could return them to inventory?

The interface takes some getting used to and the tutorial doesn’t explain all of it. I had to revert to the Steam discussion forums to learn how to activate the first mastery I unlocked, for example; I obviously wasn’t the only one having difficulty. The minimum and maximum power levels for a stage don’t seem to be shown anywhere on that stage, but rather only on the stage select screen beforehand. For that matter, these don’t seem to be explained anywhere, so I’m not entirely sure what they do. It’s also a shame that only the keyboard seems to be able to pan a board, making the game unable to be played with only the mouse.

The music is great, with a large number of well-composed tracks across a number of musical tastes, many of which seem to be for specific levels. While I’ve heard some tracks over and over again as I repeat quest levels, I’ve not yet become bored of any of the music. Sound effects are functional, but not as stand-out fantastic as the music. 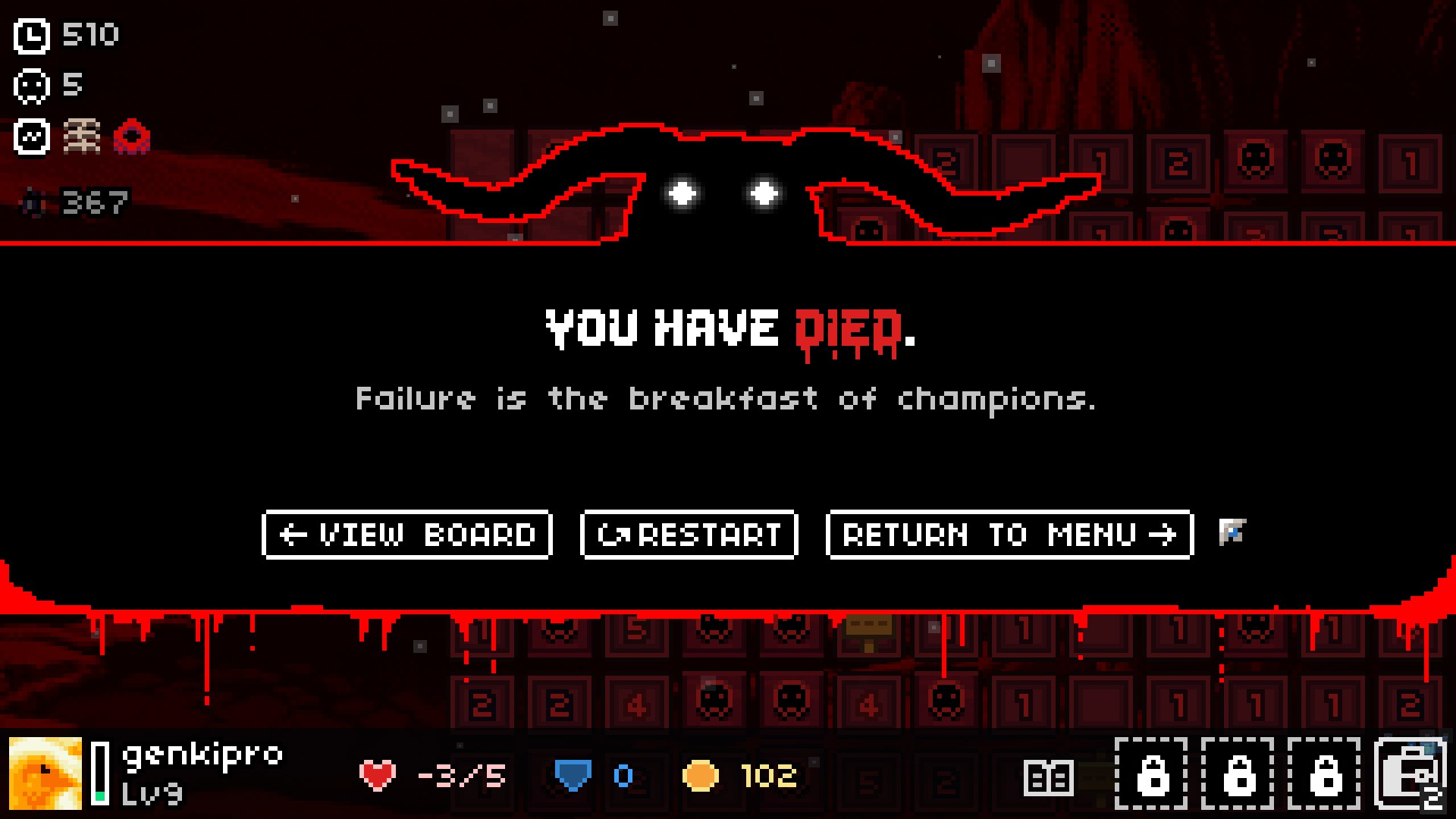 Demoncrawl is hugely addictive; it cries for “just one more go” more than any other game I’ve played recently. But I’ve realised that I don’t actually find it to be very much fun. The huge number of items and other in-game modifiers turns the mostly-skill-with-a-bit-of-luck game of Minesweeper into mostly luck with a bit of skill, leading to me feeling that I’ve wasted a lot of hours on long quest runs that have been ended by poor item drops and the like. While this occurs to a degree in any Rogue-like game, here it feels more frustrating. The pixel graphics are also rather ugly.

That said, it’s a pretty amazing extension to Minesweeper, some of the effects of items on gameplay are clever, and the music probably makes up for the graphics. If it tickles your fancy at all then it’s likely to keep you busy for many, many hours, especially if you’re a completionist — some of the achievements are rather tricky!

As I mentioned earlier, there’s a free version on Android, so why not try that out first, then pick up the Steam version once you’re sure you’ll enjoy it?