A rare case of improving everything and still disappointing…

Receiver was a neat game that was released a little over 7 years ago as a full game, a big part of it being developed in a game jam for shooters. Done is such short time, the big focus of the original was essentially having massive detail in how you handled your pistols (while there were a few, no other gun classes were present) and used them to grab a few tapes while you destroyed your robotic enemies (turrets) in a procedurally generated environment.

So yeah, it was basically “pistol-porn-slenderman”.

And now we get Receiver 2, bigger and better… slightly. It feels like Receiver 1 but with a massive rework – enhanced textures and better lighting to give a better atmosphere, more gun detail and better animations. The sad part is you still just collect tapes and shoot turrets for the entire game, the only novelty replayability wise is the same as the original: getting the new guns and seeing how they change in functionality and detail (the revolver always shining).

Receiver 2 isn’t a bad game but it barely fixes the issues of the original.

With really no story at all, your main reason to play is the same as most roguelite games: succeeding and progressing to the next, harder level. After collecting 5 randomly placed tapes, you get to listen to neat audio logs (from a sort of audiobook cover to information about the weapons to some meta-commentary) and progress.

The start is always roughly the same: you get a pistol and a few bullets and must explore for the tapes. Turrets are pretty abundant and the blue lights they emit are to be avoided as you die in one shot. 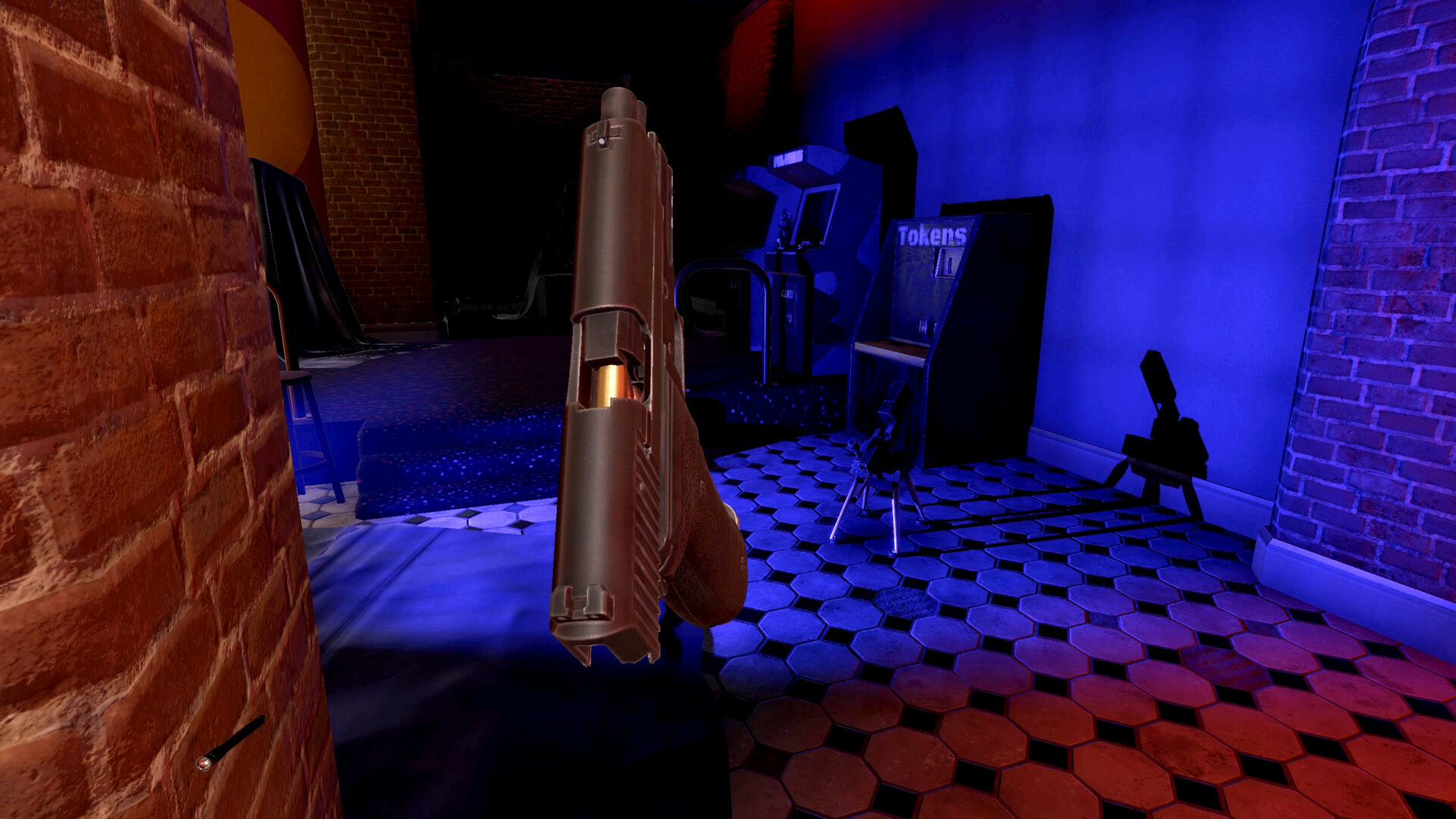 Anyway, stealth and careful maneuvering around the level is crucial for your survival as well as accurate, well-placed shots to take down those turrets (ammo box or the battery are the recommended spots, so get used to trying to flank them). Get spotted and they will make a beeping sound and turn their blue light into a yellow one – you then have close to a second to break the line of sight or kiss your progress goodbye.

The game is split into levels, after collecting 5 tapes, you move to the next one; if you die, you go back one level: if you’re on level 3 and die, you actually go back to level 2 and have to beat it again (randomized and totally different from the last time, of course). While a bit punishing, it really forces you to play safely and take good care of your ammo and weapon.

And the weapons, my God did the developers do a good job. From a standard Glock to the powerful Revolver and Desert Eagle, each gun feels different and has specific animations and details. From the chamber to the magazine and the reload procedures, everything feels different and the shooting is extremely raw, loud and well done – it’s one of the best gunplay I’ve ever had the pleasure of enjoying in a game, the guns feel truly remarkable and responsive. 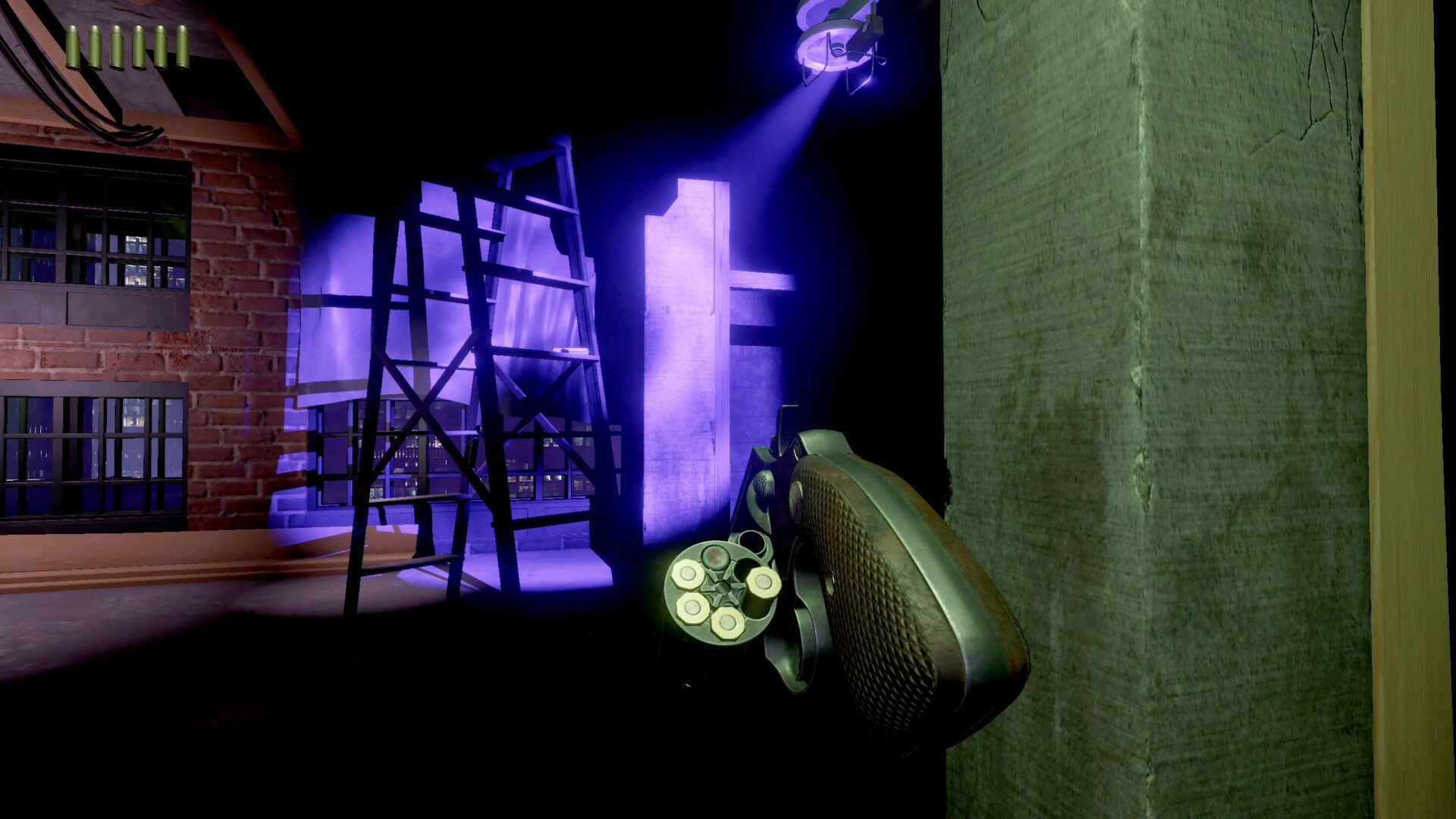 Despite the great detail and gunplay, the controls of the game are confusing and extremely frustrating, even for a semi-experienced player.

It’s worth mentioning firstly that on the side of your screen, you’ll have all the keybindings to control the gun – and it’s a massive amount of them. From holstering the gun, to pull the slider or the magazine or inspect the chamber and activate the safety (because if you don’t, you may shoot yourself while holstering, so be careful). While all the detail is great, nicely animated and allows for extremely tense combat encounters, there are a lot of default irregularities in the controls across all guns, such as pulling the slider being bound to different keys for different weapons, which is extremely confusing and nonsensical – obviously, the revolver escapes this criticism as it handles entirely differently for obvious reasons.

Double-tapping W to sprint or pressing Tab to holster the weapon are odd design choices that should not be the default controls, the game is tough for beginners and presenting these controls for the first time is beyond odd and confusing, especially for first-timers that will surely die in early encounters and feel more frustration than they should. It also would help reduce the difficulty curve.

The repetitiveness of the environments starts to become a major problem of the game after a few hours once the novelty of the gun mechanics start wearing thin and the game goes back to being boring and “same-y” like the original Receiver after a short while.

I feel that there could’ve been so much more to this game… more environments, more enemy variety, even VR support would be a phenomenal addition that is sorely lacking here. It really feels like a better version of Receiver one but all the problems are the same aside from the much superior graphics… but you also have to pay over triple the price, from the original’s cheap 4,99€ to this one’s 16,79€, which isn’t all that bad but considering that the gameplay loop is mediocre at best (despite the excellent gun detail gimmick), you’re better off spending that money on another roguelite or shooter game… or wait for a sale if you enjoyed the original Receiver.

The music sounds generic and unappealing, I ended up muting it after a while and enjoyed the game as a pseudo-horror tense tactical shooter. As far as effects and sounds, it’s all excellent, from the raw power of the gun sounds to the gun maneuvering sounds (pulling a slide, filling the magazine with bullets, sliding the magazine back, etc.) to the distinctive and scary beeping of the turrets detecting you, Receiver 2 nails the gameplay sounds while missing the mark on the music department. 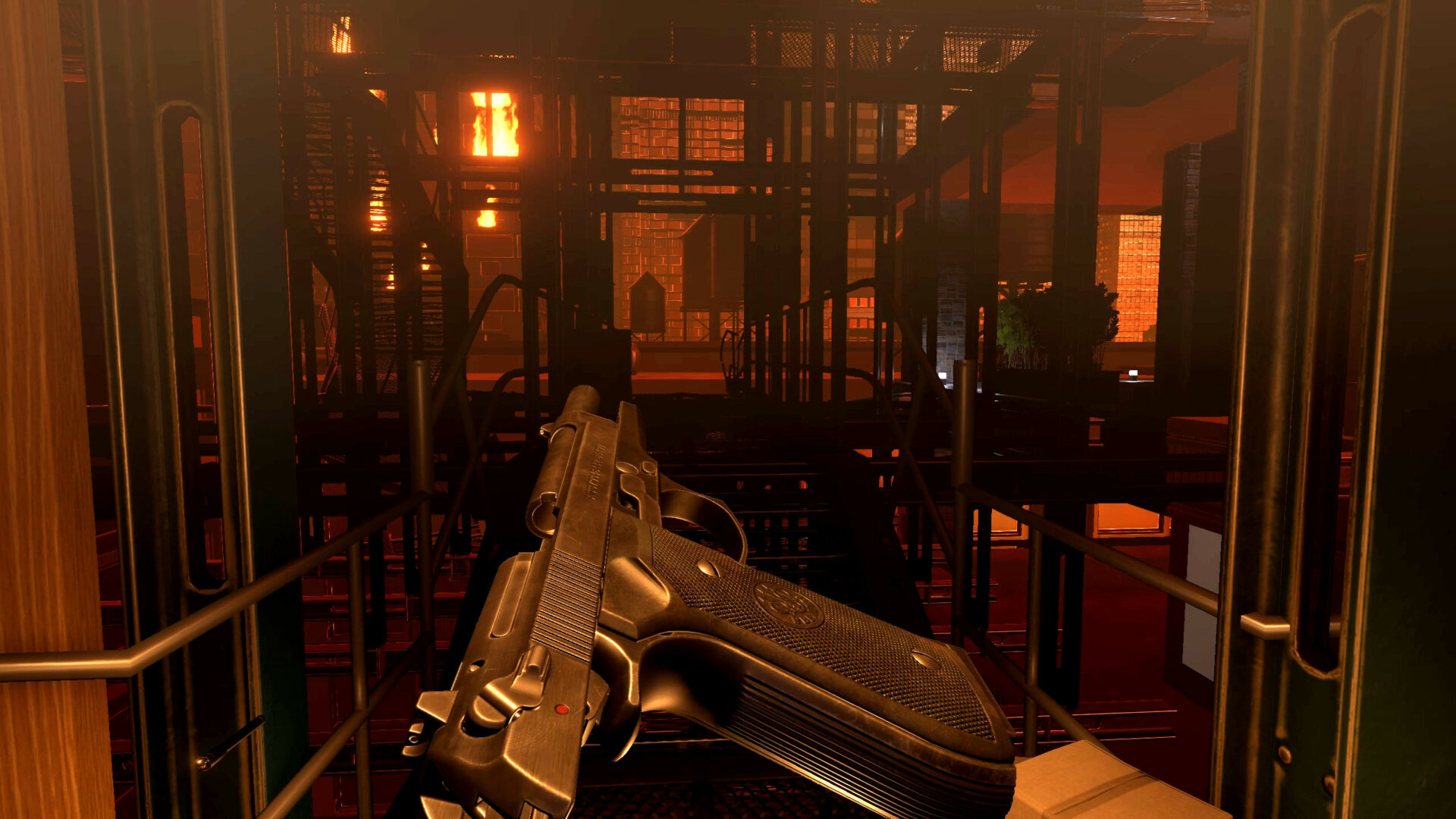 While nothing amazing looking, the game has a lot of praiseworthy parts graphics wise: the improvement over the original is stunning and the weapon details and animations are stellar. The rest of the enemies didn’t get that much detail sadly and the environments are still lacking a lot, such as interactivity to allow further stealth possibilities. The game also seems to spend a lot of resources without looking like a game that should spend those resources, my PC started heating up a lot after playing for a while, really killing my will to keep playing (on top of the repetitive nature of the gameplay).

There isn’t much necessarily wrong with Receiver 2, and what needs fixing isn’t that hard. The core gameplay suffers from being roughly the exact same as the original, really giving a steep learning curve (that is quite fun to learn) that centers around deep weapon manipulation mechanics on a rather shallow gameplay loop of finding tapes and progressing through similar environments… the entire time.

It could’ve been so much more, a game I’d scream out of my lungs as a fantastic title to play in 2020, but as it is… it feels like the developers played a bit too safe and basically polished the original game and tripled the price – while 16.79€ isn’t a bad price, I’m still recommending you wait for a decent discount.