Anno crossed with Numberlink. Great concept and good enough execution that will entertain most puzzle fans.

Puzzle Pelago is a puzzle game where you must satisfy the need of each house by combining resources (wood, coal, flour, etc.) into products (furniture, tools, bread, etc.) and connecting them to the respective houses without crossing paths. Essentially, it’s the Numberlink game (a japanese pen and paper logic game, like Sudoku) crossed with a more traditional video game like Anno.

I really love the concept. It has the ability of providing clean and elegant puzzles and at the same time twists a city-building game into a more concise puzzle game (transformatively, let’s say, with its losses and achievements).

The biggest problem with the game, in my eyes, is that it follows a very common trend in puzzle games – that of creating puzzles by adding more mechanics rather than diving deeper into the simpler mechanics. In Puzzle Pelago, it is really a problem inherent to the concept, since it relies on the combination of resources itself.

Out of the 101 puzzles in the game, about 80 of them are mostly build-up, with sets of 6 puzzles teaching you a new combination of resources. Only on the last 20 levels does the game settle down and present you with real puzzles. 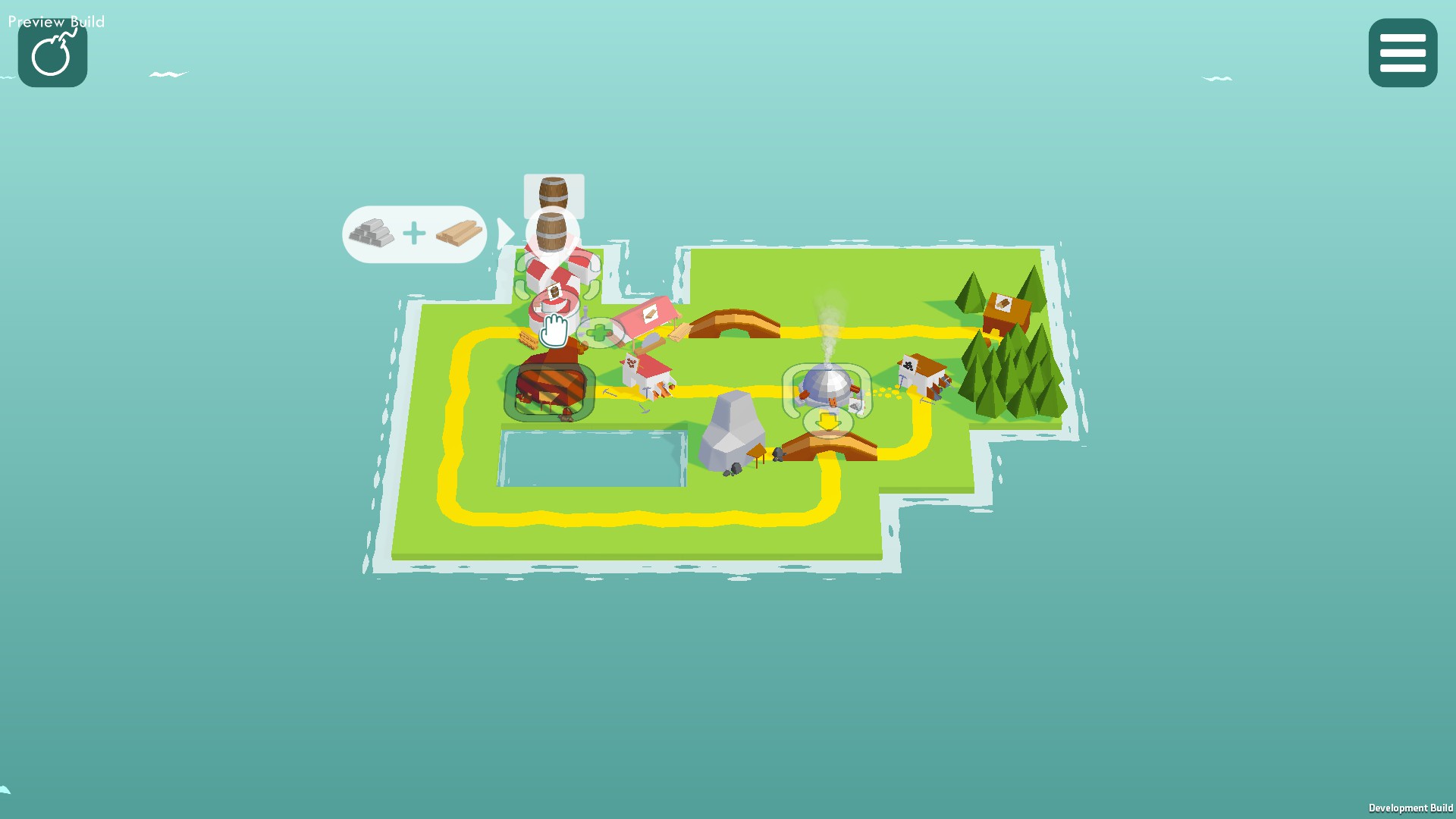 The art style is quite nice. It’s clean and presents information well – for the most part. Unfortunately, some of the labels on houses can obscure the tiles behind them; perhaps solvable with a slightly higher camera angle.

There isn’t any variety in visuals or music, but that’s not really the point. The music was well composed and arranged in such a way that, despite being repetitive, it didn’t feel tiring.

The tutorialization was a bit too wordy for the kind of game that it is. I feel like it could have cut on the words and gave a simpler diagrammatic explanation of the mechanics (with wordy explanation in a help menu) but it isn’t too big of a problem.

Finally, the interface is fine, except for a bug in “square selection”. Sometimes, you hover over a certain square, which the game highlights, but the game thinks you’re trying to drag the square below it, for some reason.

Some of the bigger levels can also get quite confusing and crowded.

All in all, the presentation is good. Some details to iron out before the full release, but it serves the purpose well. 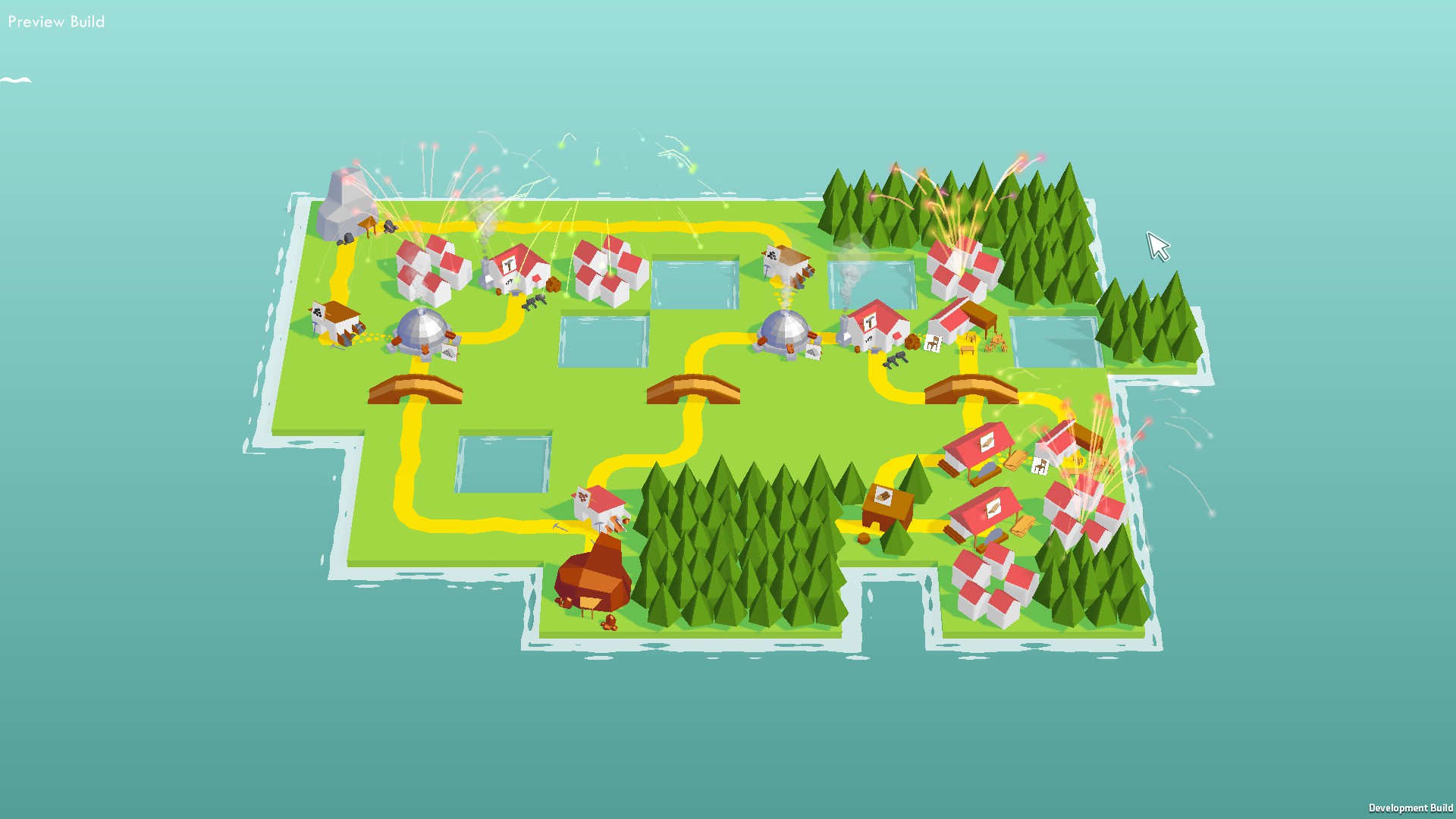 As I said, the game has 100 levels. These are divided into many sets of 6 (for the most part), each teaching you a new mechanic. The problem is that each of these sets must scale the difficulty back down with maybe 3 very simple levels that exist solely to teach you the mechanic properly and the later 3 levels to explore it. For the most part, though, these are still very simple.

Until level 80 or so, I’d say that maybe 75 of them took me less than a minute to “solve”. A handful went in to the 5 minutes, perhaps. As I said, I feel like this is inherent to the concept, since you really do need to go through many small stepping-stones before you reach the real puzzles.

Fortunately, some of the last 20 puzzles are very good! Not all of them, and not on the same level of elegance, minimalism or difficulty, but they’re mostly good. 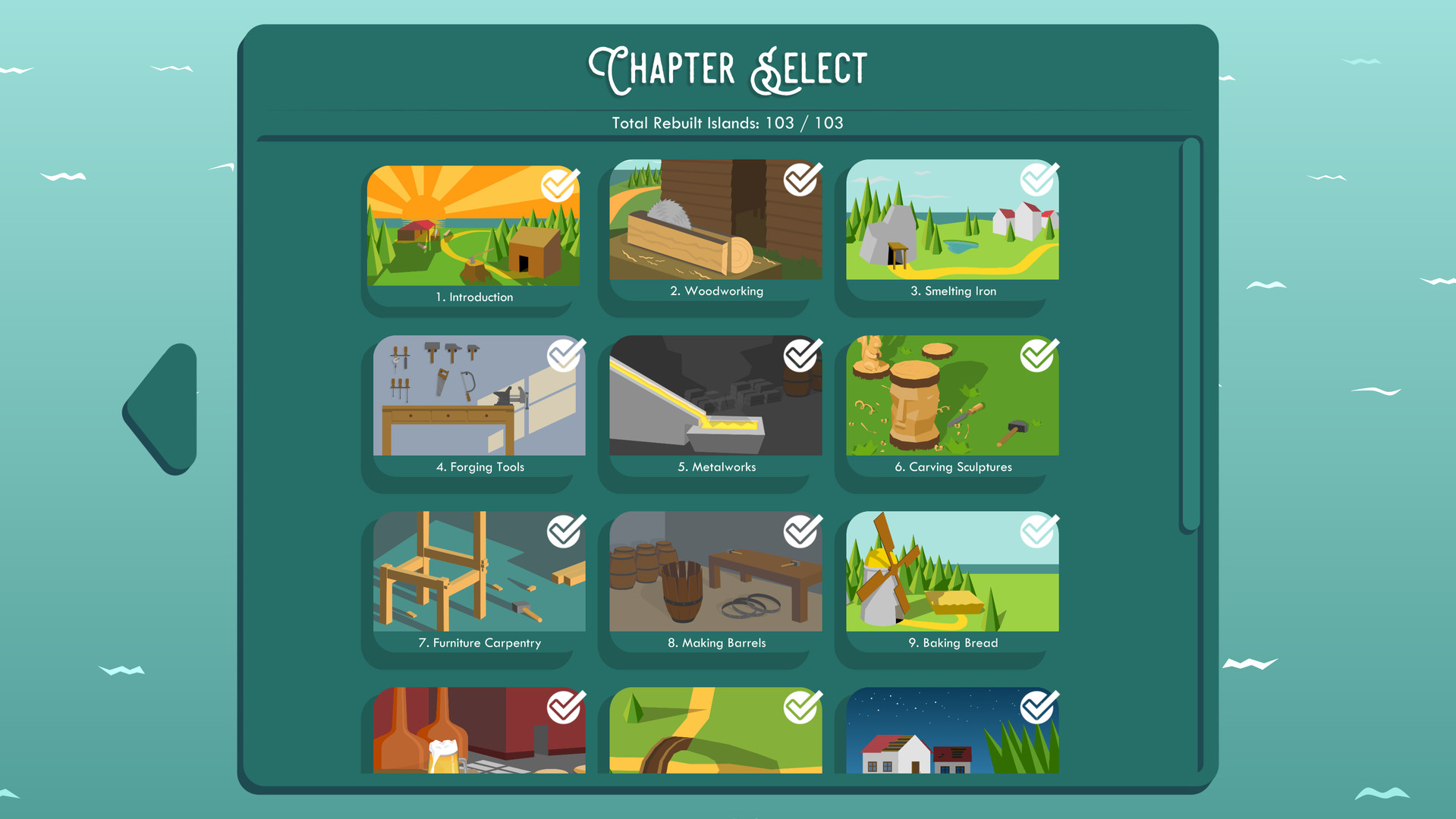 One thing I typically look for in puzzle games is some abstract notion of elegance and minimalism. Unfortunately, I feel like Puzzle Pelago fails in this regard in several ways.

One trivial approach to elegance is in the number and complexity of the mechanics. Take the game Numberlink. It’s like Puzzle Pelago, if every house required a different resource, and resources didn’t combine. It’s like the ground zero.

And yet, in an admittedly technical (computational complexity), sense, Numberlink is just as deep as Puzzle Pelago. There are countless Numberlink puzzles, small ones, that are deviously difficult. Think of Sudoku, too, they are great cases of doing a lot with very little.

Another approach is the number of solutions. At least factoring symmetry out and other trivial pathing issues. This I can’t say anything concrete about, but having a unique solution is at least suggested by the fact that you won’t “stumble” upon one. I did stumble upon quite a few solutions, but not as many as to make it a big problem.

Where Puzzle Pelago lacks elegance the most is in its use of space and “objects”. Some of the puzzles left huge areas of open space in the final solution, space that didn’t need to be there at all – except, perhaps, to distract you from the real solution. The same happens with too many extra objects – for example, the game adds a bridge tile later on, which lets you cross paths on that tile. This is probably the most transformative (and potentially deep) mechanic in the game, I feel like, but there are both few levels that use it, and those levels often have many bridges that aren’t needed at all.

If you don’t need the bridge, why put it on the level? In my view, it detracts from the real puzzle. It’s more about obscuring information than anything else.

Finally, another important point is that the larger puzzles are a bit too often “modular” – that is, they are largely independent mini-puzzles. This is not completely so, but it happened often enough for me to notice. Like having a small easy puzzle (or two) on a corner of the map that didn’t really interact with the main (difficult) puzzle at the center.

So yeah. This isn’t a huge problem at all. But it’s something that holds the game back from being the “best Puzzle Pelago” game it could be – because some of the absolutely best and hardest puzzles in the game DID use the whole space and every resource to great effect. 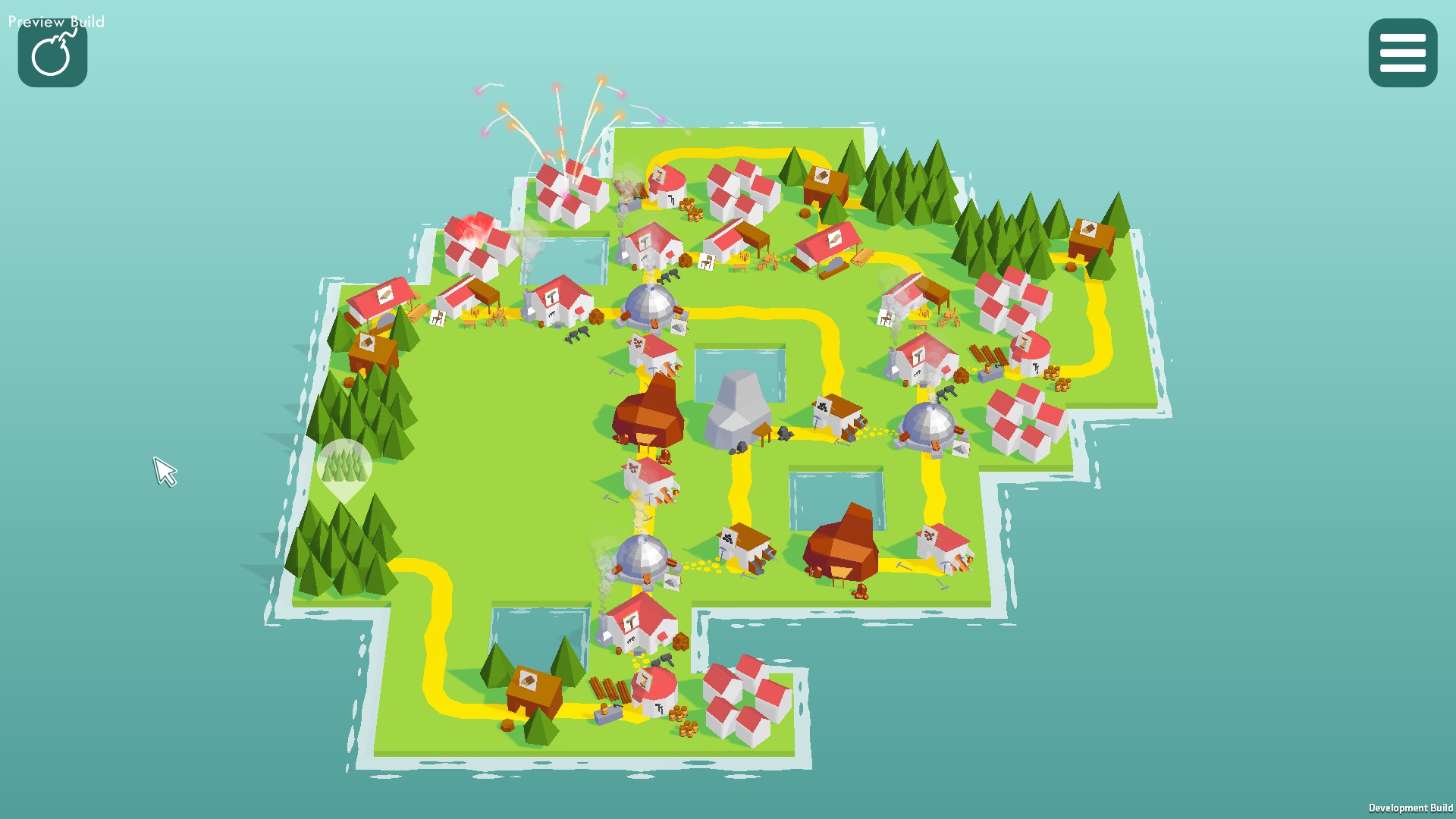 The final aspect I want to mention is the “eureka!” moments. As I implied before, the majority of the game is really a tutorial, a build-up leading to the final few levels. So you don’t learn anything fundamental about the game in those early levels. The solutions don’t require any surprising insight or outside the box thinking.

That said, some levels do! Even those that did require that special insight took me 10 minutes for most of them, some 20. This is strangely contrasting with Mystic Pillars (the last puzzle game I reviewed), where, despite the much simpler mechanics, some levels took me nearly an hour to solve. 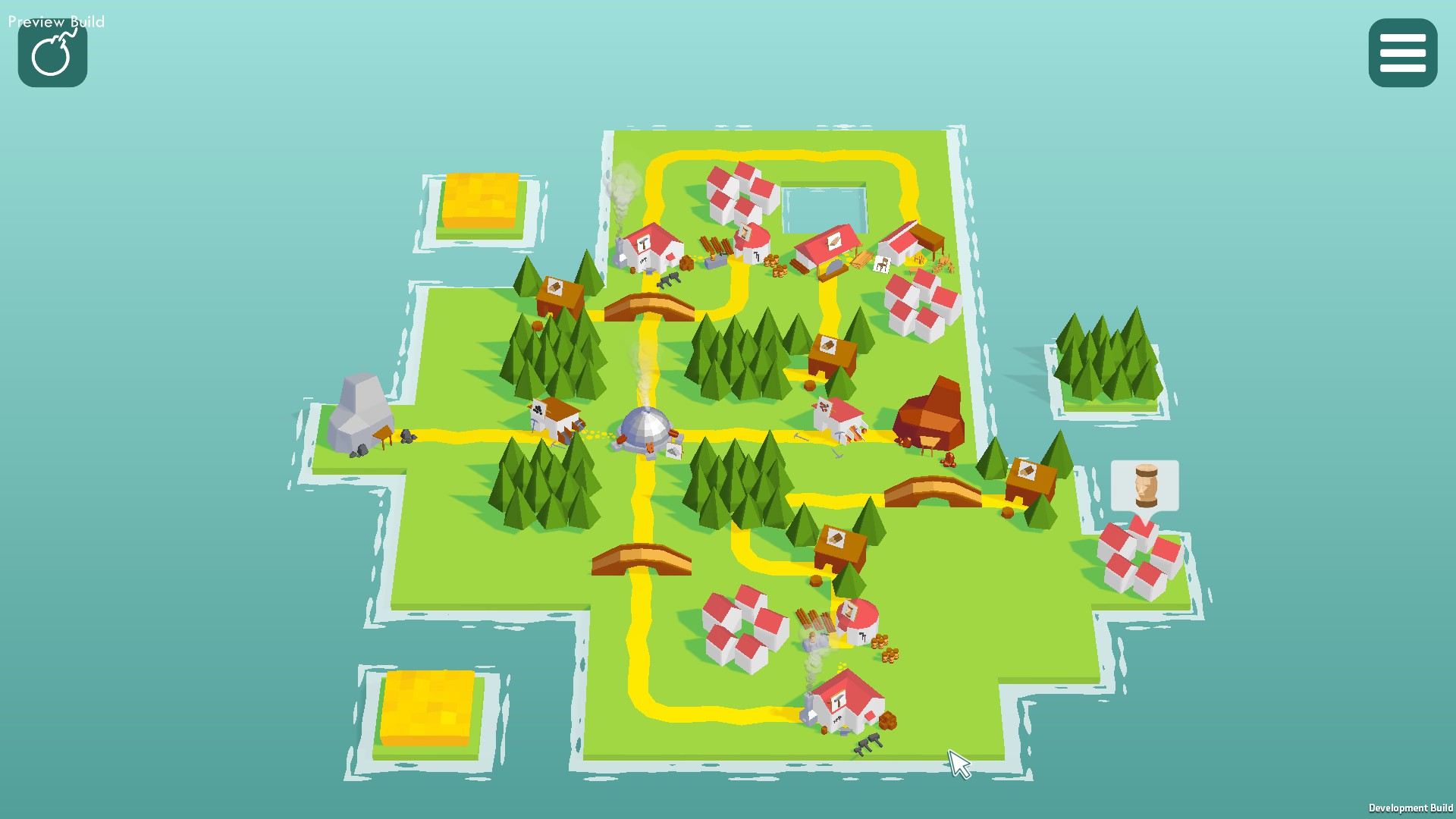 Puzzle Pelago has a great idea, but is not without its problems. It has too many mechanics that take too many levels to build up into meaningful puzzles and has some even once the meaningful puzzles are reached, and so is mostly on the casual side. That said, it does have its moments of brilliance that makes it well worth playing if you enjoy puzzle games.