You are a new disease and your goal is to wipe out humanity.

With the global coronavirus pandemic nowadays, the conversations about diseases and how they spread have become more common. Many of us are undoubtedly spending more time pondering on how diseases spread and what diseases are out there and whether a disease can infect the whole world and wipe out humanity. This is the perfect time to play Plague Inc: Evolved – which is essentially a disease outbreak simulator. As a new disease, your goal is to wipe out the entire human population by any means available. 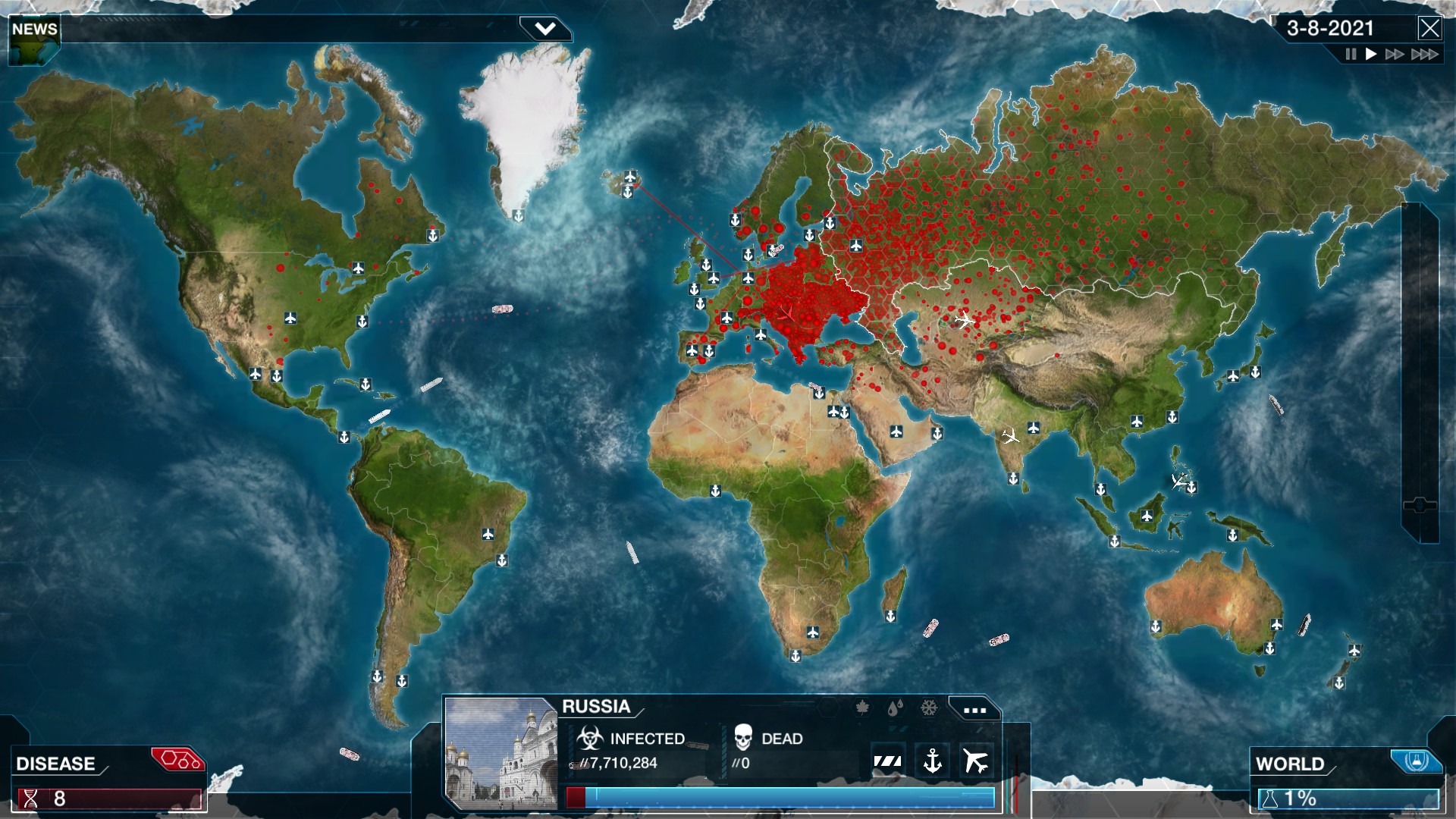 The story is simple – destroy all humans! As a simulator, it doesn’t really have a story mode. However, it has a number of scenarios for us to play. The story is as you want it to be. You are the new disease, so you shape the landscape of the world from the moment you infect your first host to the moment the last living person draws their final breath.

The world is exactly as we know it in the modern-day. We spend most of our time on the world map. Each country has its own features, which are important to take notice of – hot, cold, urban, rural, arid, humid. This comes into play when deciding on your mode of transmission. Each second of real-time causes one day to pass in the simulation and various world events keep happening irrespective of what our disease is doing, ranging from natural disasters to terrorist attacks, to Olympics events. Many of these events can create opportunities for our disease to spread or kill quicker. For example, increased bird migration event – time to increase disease spread through the birds. Or increase in winds – use aerial method to spread your disease.

The countries will also take notice of your disease once it becomes serious enough and will begin to develop a cure and shut down land borders, airports, and seaports. So, expect the world in-game to behave as the world in real life would. This, however, doesn’t mean that our disease can’t stay undetected for as long as possible and trick humans until their fate is sealed. 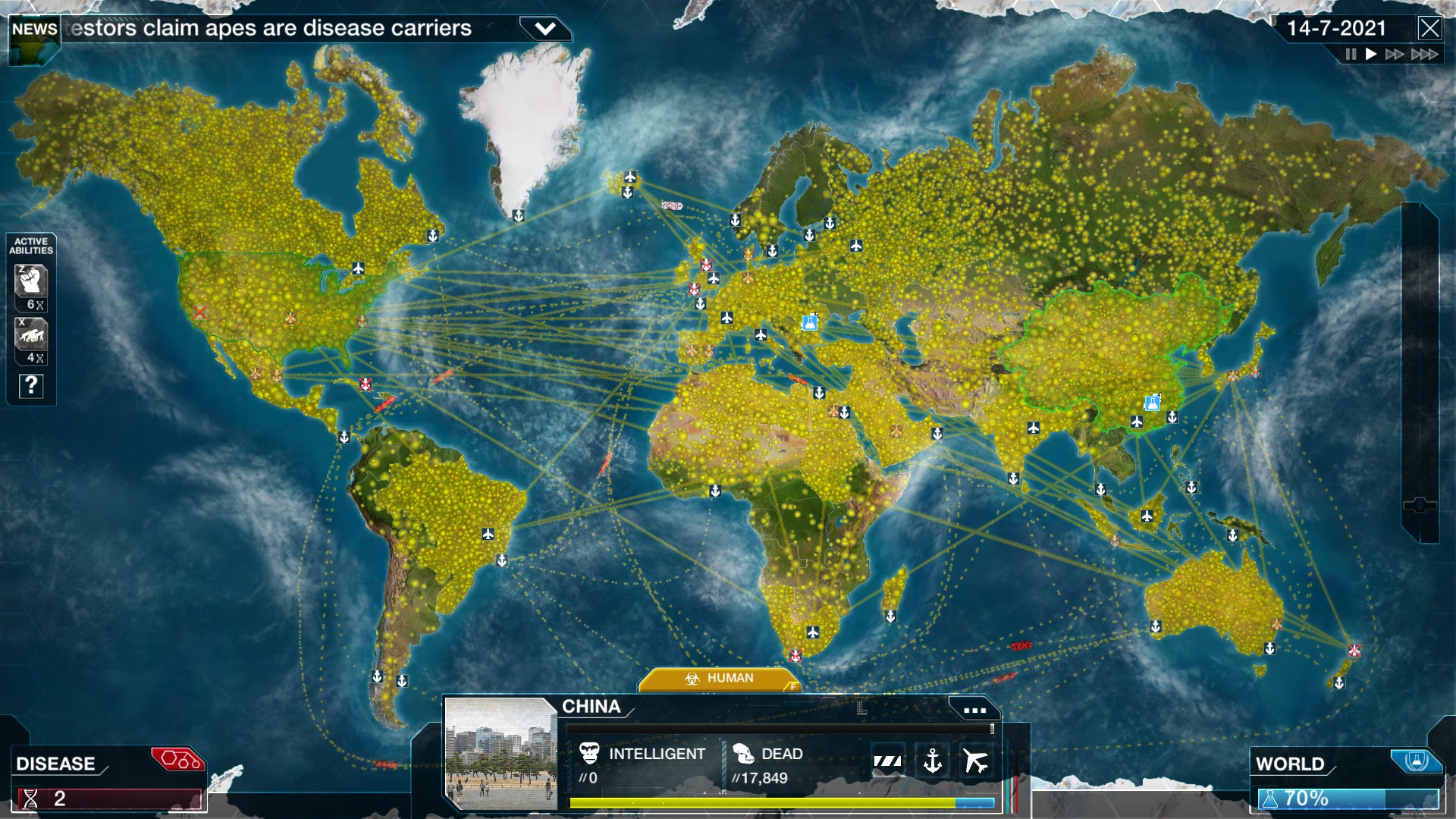 The gameplay involves us taking control of the disease’s upgrades. As it infects people and spreads to new countries, we gain DNA points. These DNA points are needed to get upgrades. The upgrades fall into 3 main categories: transmission, symptoms, and abilities. Transmission involves gaining new ways of spreading the pathogen, such as through the air, water, insects, animals, and so on. Symptoms can vary, with some being good for spreading the disease (such as coughing or skin lesions), others increasing lethality (e.g. total organ failure, necrosis), and some being good at slowing down scientists that are making a cure (e.g. insomnia, photophobia). Lastly, abilities upgrades are all about the strengths and weaknesses of the pathogen, such as making it more resistant to medications or temperature extremes and hence having more success at spreading. 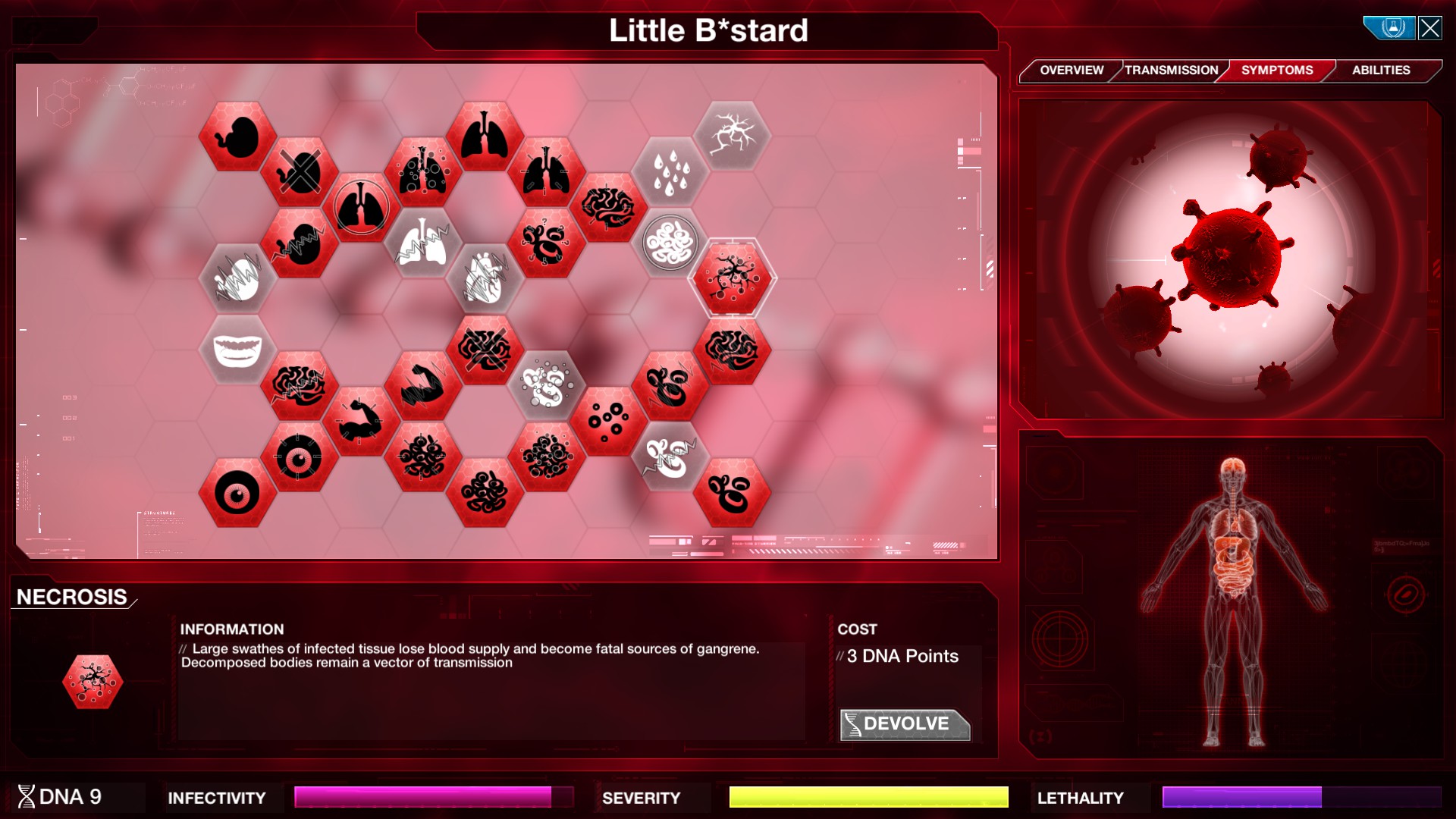 Each upgrade costs a different amount of DNA points, and they are arranged in trees, so some upgrades are a requirement for others. For example, before you can get lethal symptom upgrades, you need to get some milder symptoms first. So, we are largely in control of how we spread our disease and what effect it will have on the human population. The disease has 3 key stats we need to pay attention to: Infectivity, Severity, and Lethality. Infectivity shows how easily the disease spreads from host to host, Severity shows how hard it is to cure it, and Lethality shows how quickly it kills those who are sick. Of course with higher severity and lethality scores, the disease will get noticed by people and deemed to be a threat much sooner.

It’s a very good and accurate simulation of diseases in real life, although it simplifies things for the purpose of making it fun (for example, in real life, diseases don’t evolve so quickly and the mutations happen more randomly). There is a lot of choice on how to evolve the disease, but not all of those evolution paths would make for a disease that successfully wipes out all humanity. So, a certain strategic path needs to be followed, such as for example it is more important to spread as much as possible while staying undetected and harmless early on, and only later developing lethal symptoms. However, although it might seem that there is only one way to beat it, this is not the case, and there are multiple different ways that can be adopted to gain success. This is especially true if we consider that we can start our disease in any country on the world map, so how it transmits to the rest of the world from there would differ. 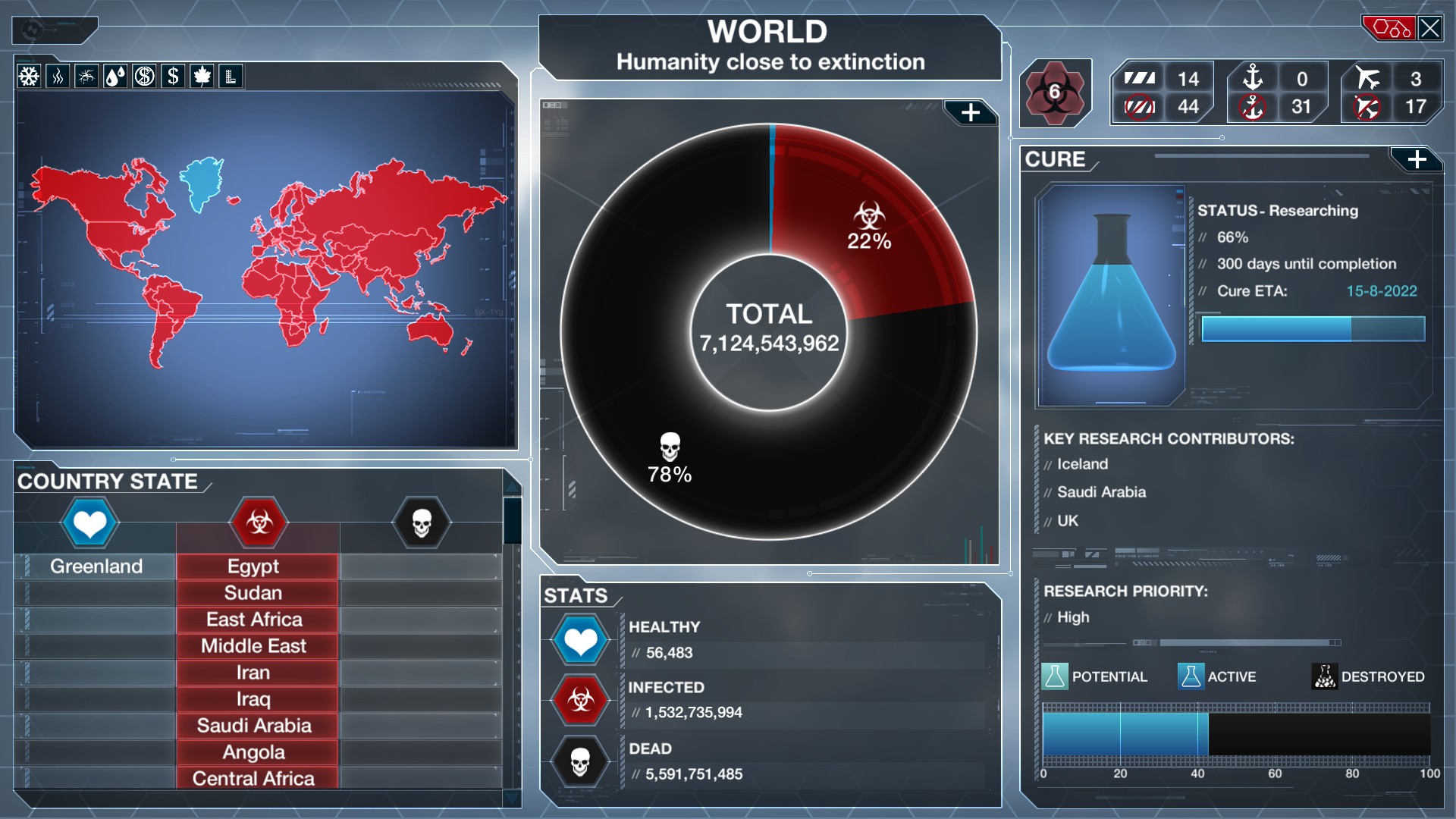 Of course, the game offers more than one type of disease, and this is where variety comes in. We get all our standard disease types, such as bacteria, viruses, parasites, but also a few exotic ones that are mainly fictional such as a zombie virus and a brain-controlling worm. Most of the standard disease types have the same upgrades during the game, while the exotic diseases have many of the unique upgrades, which drastically change the gameplay. 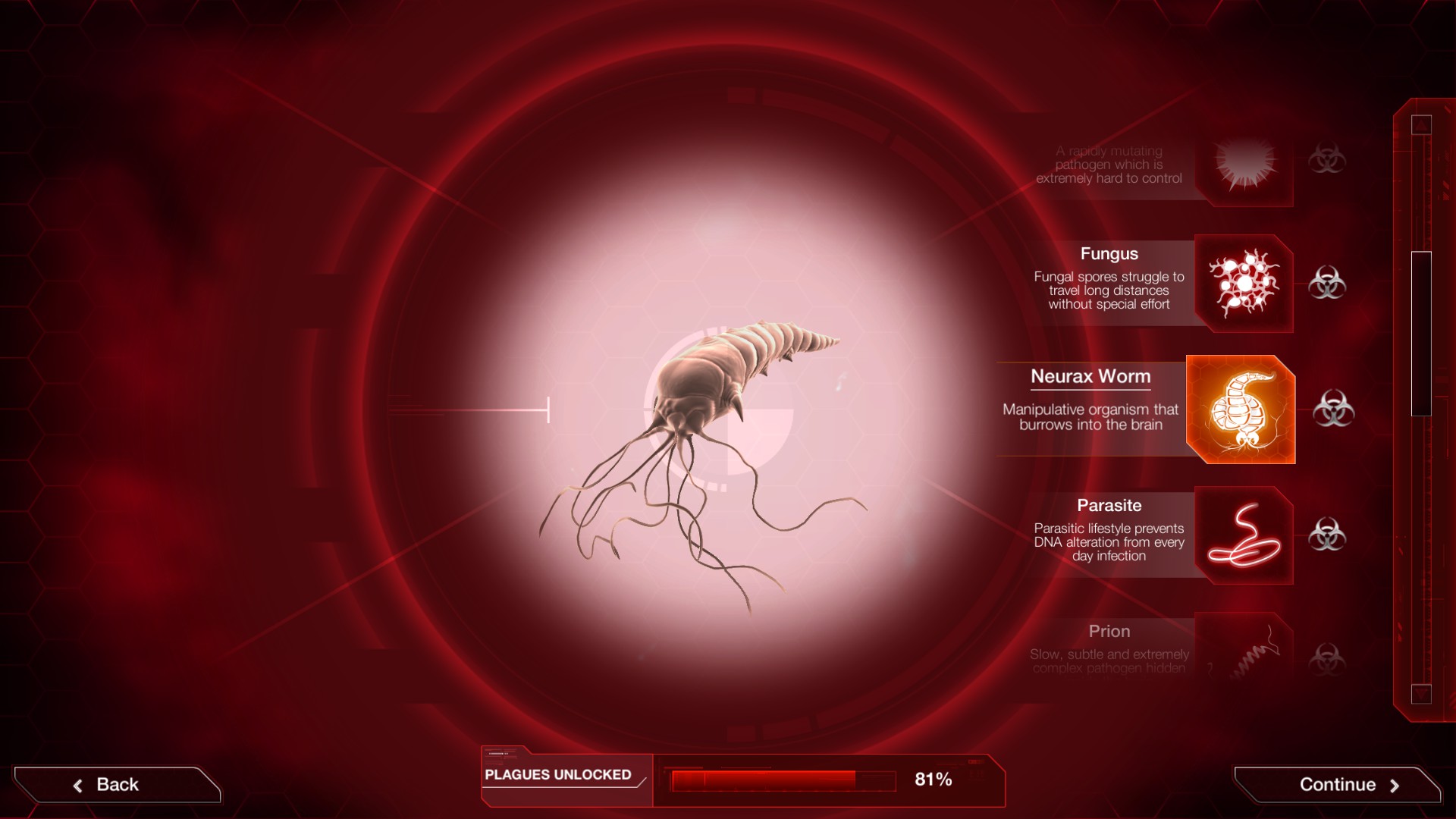 Each disease type is different. Even between standard disease types, there are key features that change things. For example, viruses mutate on their own much more frequently than other types, and so we need to pay more attention on controlling how they evolve so not to be exposed too early, while a fungal pathogen for example doesn’t spread to neighbouring countries as easily as other pathogens, so we have to make use of a special spores upgrade to spread it to other countries at the correct time.

We can also pick one of four difficulty levels for each simulation we do, starting from Casual where people do not wash their hands and give hugs to sick people, and ending with Mega Brutal, where everyone is on edge, doctors do not sleep, and everyone is getting medical check-ups at all times. We have to beat each disease type on Normal difficulty or above in order to unlock the next one.
Here are a few of the noteworthy exotic disease types, scenarios, and game features that are worth checking out: 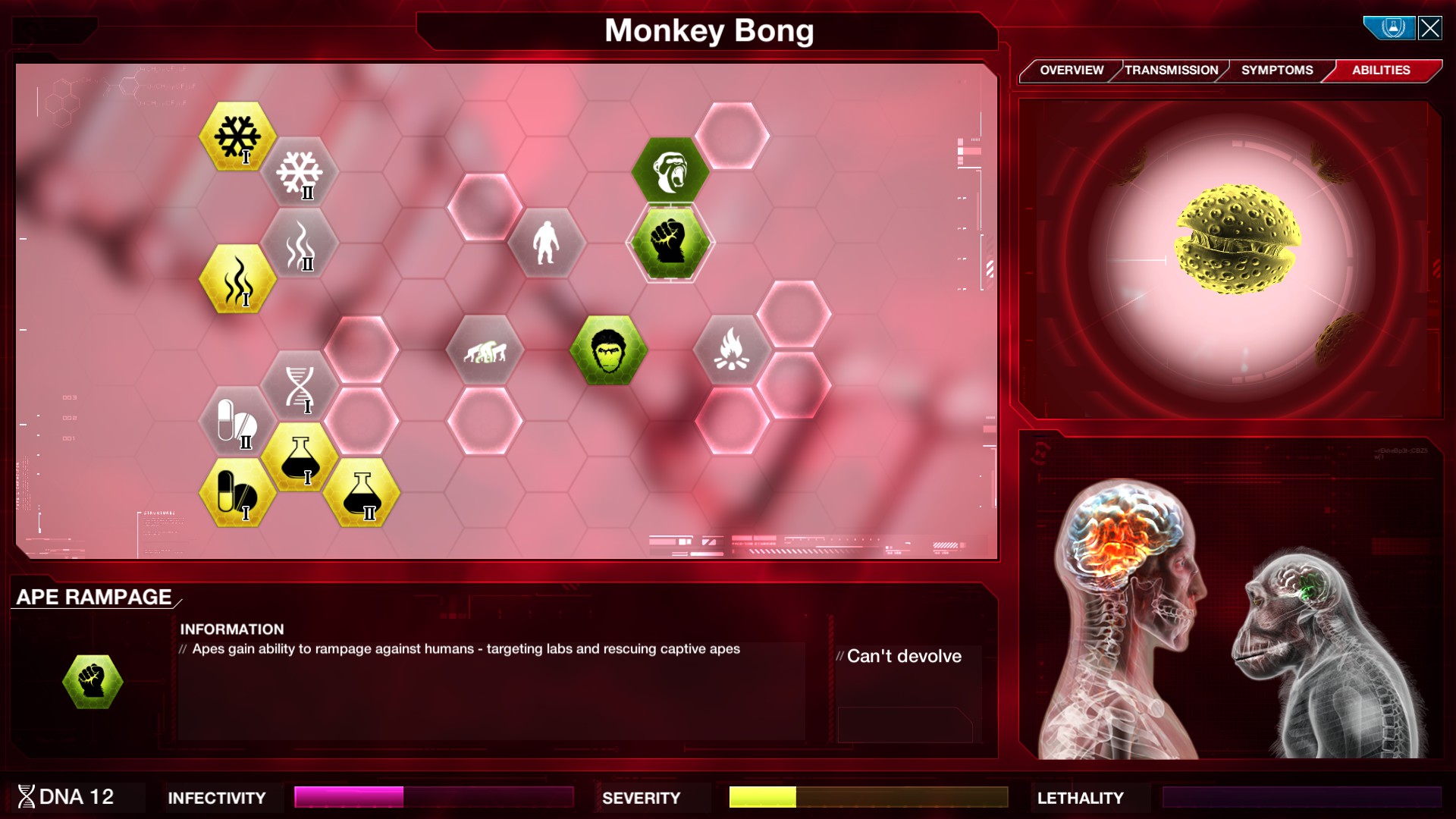 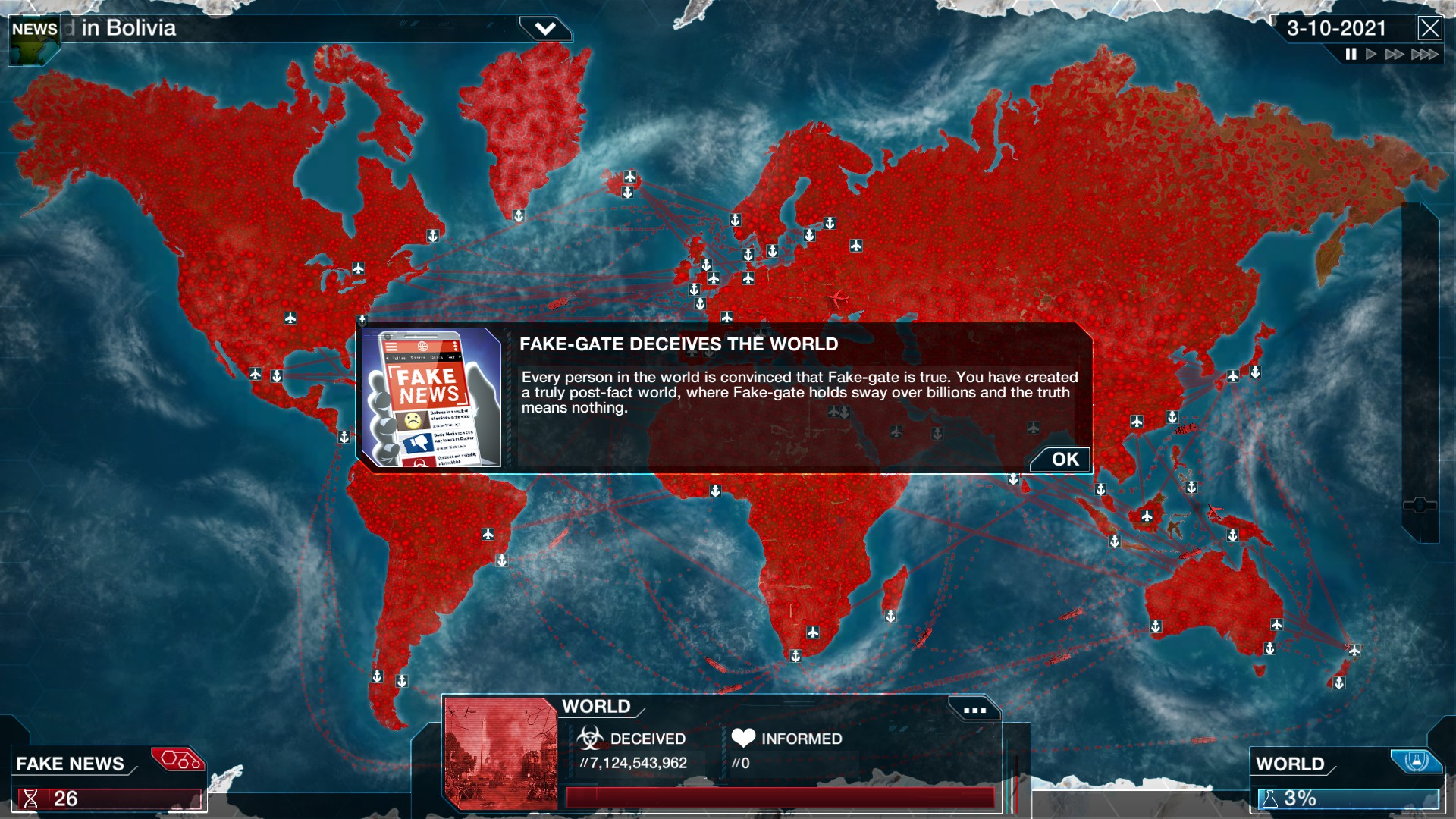 The visuals structure is somewhat basic but at the same time impressive. It shows good attention to detail and polish while also being easy to use and navigate. Every upgrade has a description, every country has information, and it’s pretty easy to get a hang of the game’s mechanics due to everything being clear and concise.

The disease spread being shown on the map is pulled off well. It feels really fun and rewarding to see a multitude of red blobs fill the map as your disease is getting more and more out of control. And moreover, planes and ships affected with the disease will also take on a red colour and spread it to their destination country.

The humourous and satirical tone of some of the descriptions and world map events adds greatly to the enjoyment during gameplay.

Music is very good and manages to be just noticeable enough to make your disease spread feel epic, but not to the point where it would distract you from reading descriptions or deciding what to do next. The special fictional disease types have their own unique music tunes too, which is very nice.

I’ve not come across any bugs or issues. The game is generally really well polished and has a top-notch presentation. 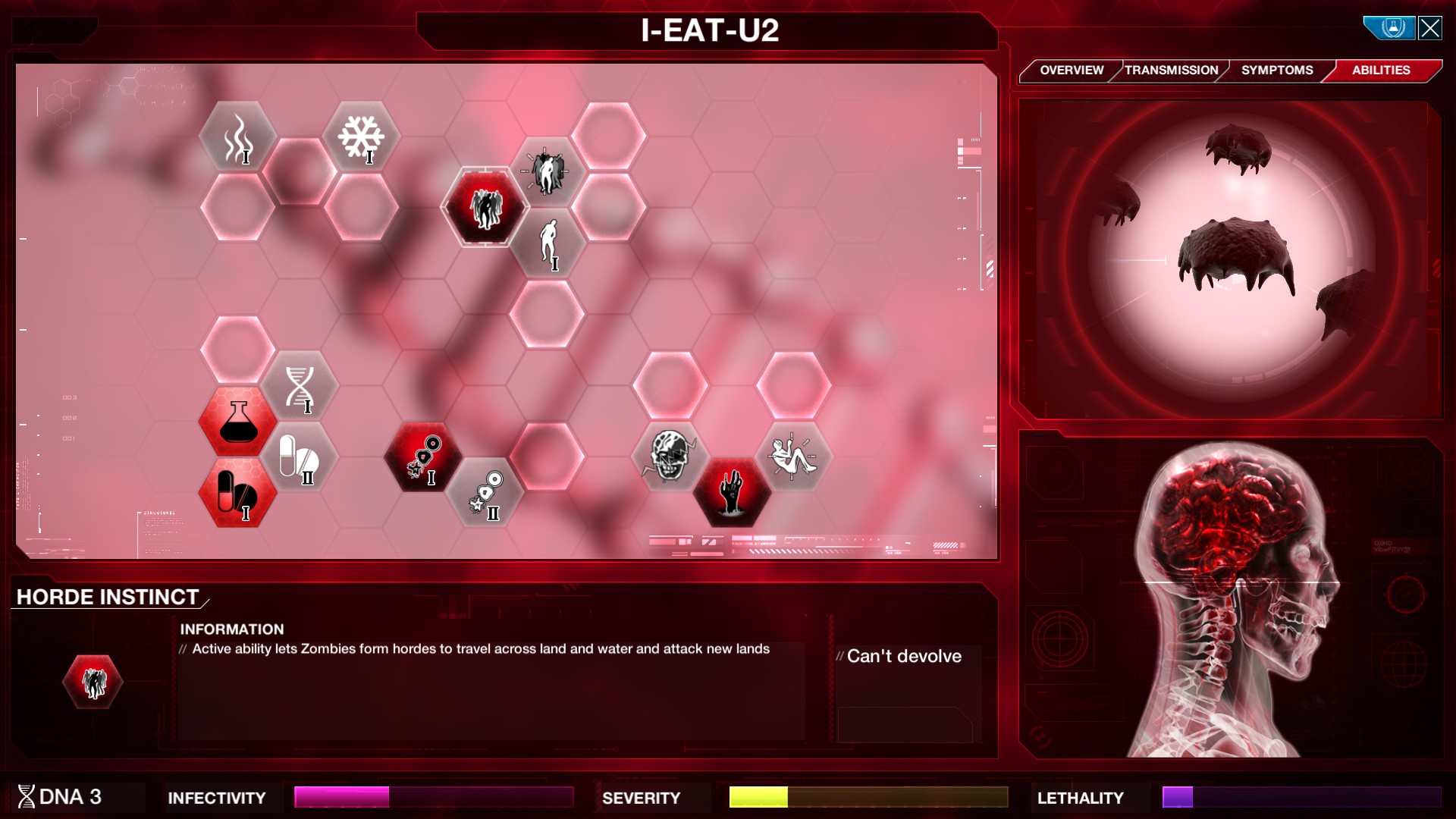 This is a super fun simulator, especially if you have any interest in bioscience and epidemiology. It provides a rewarding gameplay experience and multiple different game modes and scenarios, as well as a scenario creator and multiplayer. This game was released on Steam early access in 2014 and then had a full release in 2016, but it is constantly getting updated and has new content released on a fairly regular basis, making it well worth getting and coming back to. Moreover, it has the potential to be a great educational tool to get people more interested in and aware of science of disease. Highly recommended.