Aztez: Full of flashy combat, but there’s more than one kind of sacrifice here

Aztez seeks to combine the fast and frantic combat of a beat-’em-up game with the structure of a 4X strategy game. You play as an “Aztez”, something that’s not really explained. You are both fighting through hordes of enemies in monochroma, and managing your pre-Spanish Aztec empire. The use of Aztec imagery and lore (which is a controversial problem of culture, but I digress) is used effectively. Map locations are named after real cities from pre-colonial Mesoamerica, all the gods in the game are real deities, and the random items you get for the map screen are aptly themed. Further, as a primary game mechanic, you can sacrifice stunned enemies in combat. It leaves you exposed, but you can absorb the spigot of blood and charge up a powerful ‘God attack’. Missions pop up randomly on the map, with rewards and a bonus objective. If you fail, you lose that Aztez. If you lose all your Aztez, that’s game over. 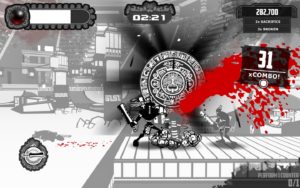 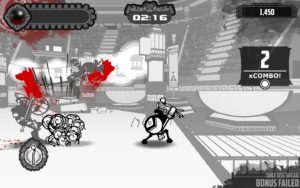 It’s important to note that, while Aztez does combine these two genres, it does not synthesize them. The strategy and the action never intersect; that’s not a bad thing. Rather, Aztez uses the strategy game map as a metagame for the combat challenges. Rarely do strategic choices affect any combat challenges, though, the reverse does happen quite a bit. Because of this, the two feel more like discrete sections, rather than a cohesive whole. While this isn’t bad per se, this would have to work under the condition that both halves manage to be satisfactory in their own right. 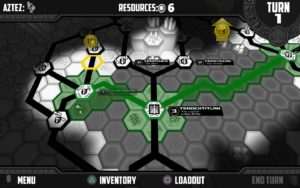 The strategic half does not. Because the events are randomized, the game doesn’t feel strategic, but instead like multiple choice. Procedurally, the cities on the map will begin ‘dissenting’, and there’s little you can do to stop it other than expending resources (an act that becomes more expensive with each use) or items. When you have the agency to execute decisions on the map, it’s fun, but so much of the game is random and limited that I didn’t feel like I was making strategic choices. It felt like I was just rolling with the punches. I couldn’t pick my set of challenges, they were randomly dealt out. Random number generation and risk management are valuable and fun game assets, but  Aztez feels like a slow barrage of combat events on a map screen. To clarify: it’s not awful. It’s not even quantifiably bad, but I couldn’t imagine ever playing the strategy portion of the game without the combat. It felt half baked and empty, like it was there to fill in the time. Worse yet, it felt like a hurdle to get to the meat of the game: the stylish combat. 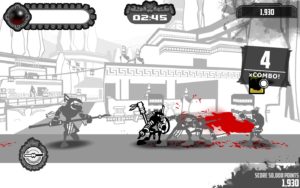 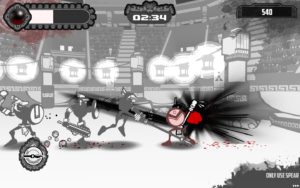 But admittedly, the combat is the focus of Aztez. The devs said major inspirations were God of War and Devil May Cry, but without the time spent in between the combat sections. It shows. The combat is stylish, with red blood being the only color to grace your screen. Which can be a problem. Because the game goes for the Madworld aesthetic of red-white-and-black, interpreting the visuals can be bothersome. I would occasionally lose myself in the wall of grayscale, and get hit or drop a combo because of it. But when it works, it works. Enemies are varied and have dynamic move-sets. That gameplay loop of: dodge & block, attack & combo, sacrifice: it feels great. The game even offers up a list of combat challenges for those who want to forego the strategy half, and just cut straight to the guts. However, they were remiss to recognize that those in-betweens in those other games, even if boring, provided quiet time and variation. The combat challenges can become dull and mindless, just teleporting into the flat static arena and slicing and dicing over and over. The game needs more variation in this way. Since the game is randomly generated, Aztez needs a broader progression mechanic, but it fails to have one. Every run feels wasted when it is finished, and you lose nearly all your materials. I often just wanted to walk away. Which is too bad, because the combat in this game is flashy, frenetic and fun. I wanted to play more with the combat, I really did, but I never wanted to have to go through the campaign to get anywhere meaningful with it, and the slog of combat challenges felt empty. This complex and exciting combat system is trapped inside a tiring structure. 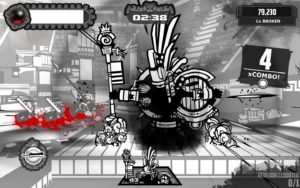 I feel as though Aztez needs more work. It really is close to a good game. It feels like it has sacrificed depth for the combination of genres. The combat is truly fun, and the style is strong, but the framework it has been placed into feels empty and tiresome. If you’re looking for a cool 2D hack and slash, you’ll be able to get your fix here, but you won’t get much else from the other half of the game.