Another tool to help beginners? Count me in.

To start off, I am a beginner in terms of learning Japanese. In fact, I actually started my journey years ago but stopped due to being overwhelmed with schoolwork (it also didn’t help that I had my Spanish class to worry over as well). I only recently started back up again and while I still remember the easy Hiragana and words, I’m more or less starting from scratch. And there’s a long road ahead.

As many probably know, one of the first steps to learning Japanese is learning Hiragana and Katakana (or Kana to quickly refer to both). You have to learn them to the point where you can easily recognize and recall them as well as knowing the correct pronunciation. Just don’t rely on Romaji past using it as a stepping stone. It doesn’t really help you as it interferes with pronunciation, homonyms are hard to tell apart when written in Romaji, there are many different types that often don’t agree with one another, and the simple fact that it isn’t used past the beginning steps. Anyways, other than using mnemonics to help the process some video games have been developed to make this process to make it more enjoyable so you’d want to continue. One of the recent releases is Kana Quest. 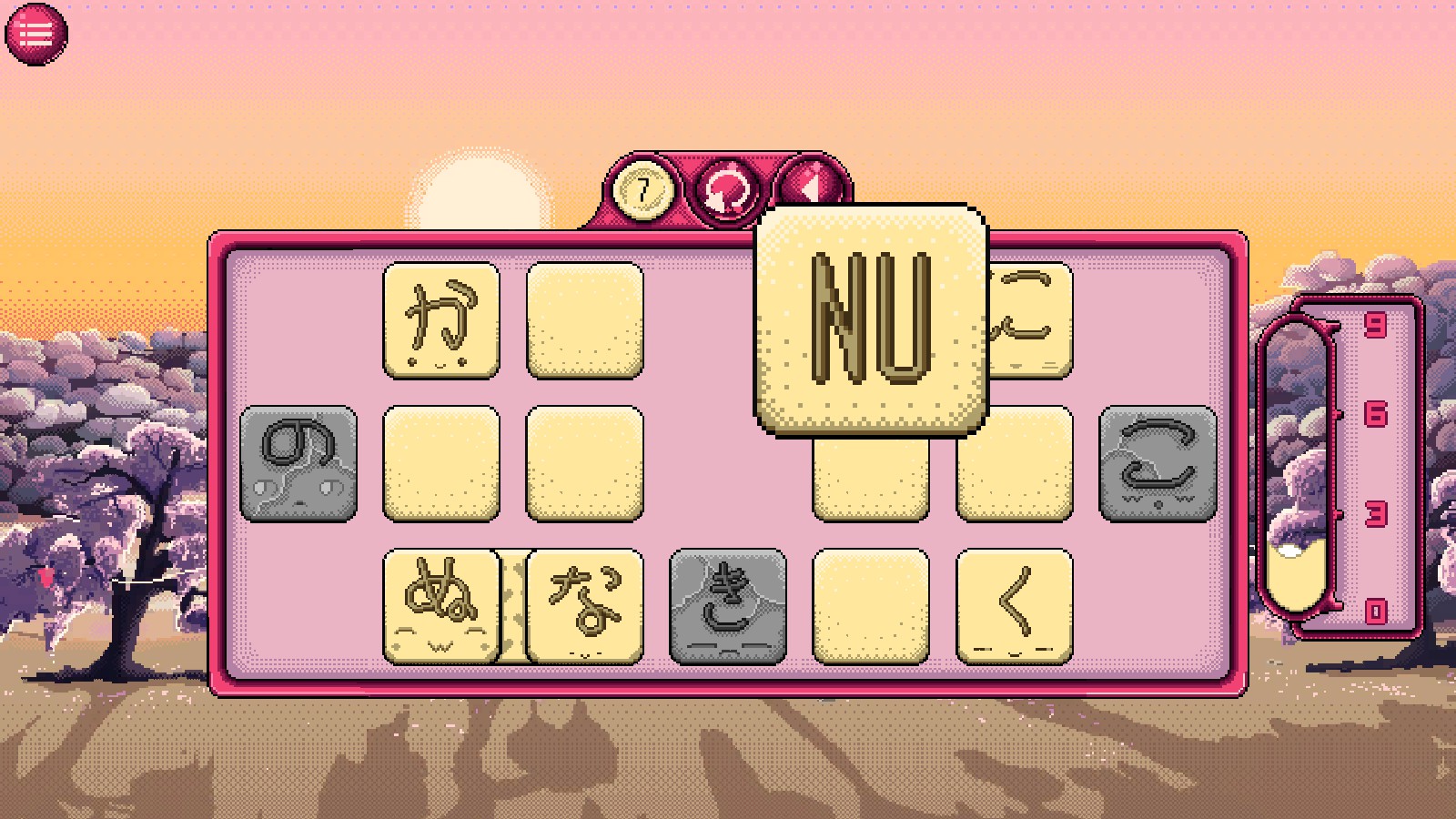 In Kana Quest, you’ll be given 300 levels to chew on with all of them spread around 13 different worlds. So what are the puzzles here? You’ll basically be matching the Kana by how it’s pronounced (or how it’s spelled out in Romaji), and sliding them into place so they all make a match-string. For example. let’s say you have “mi” (み), “he” (へ), “to” (と), “mo” (も), and “te” (て) on the grid. Other than worrying about how to slide them all into place, you’ll notice that they all share at least one sound with another so to make the match-string you’ll connect them like: へ-て-と-も-み. 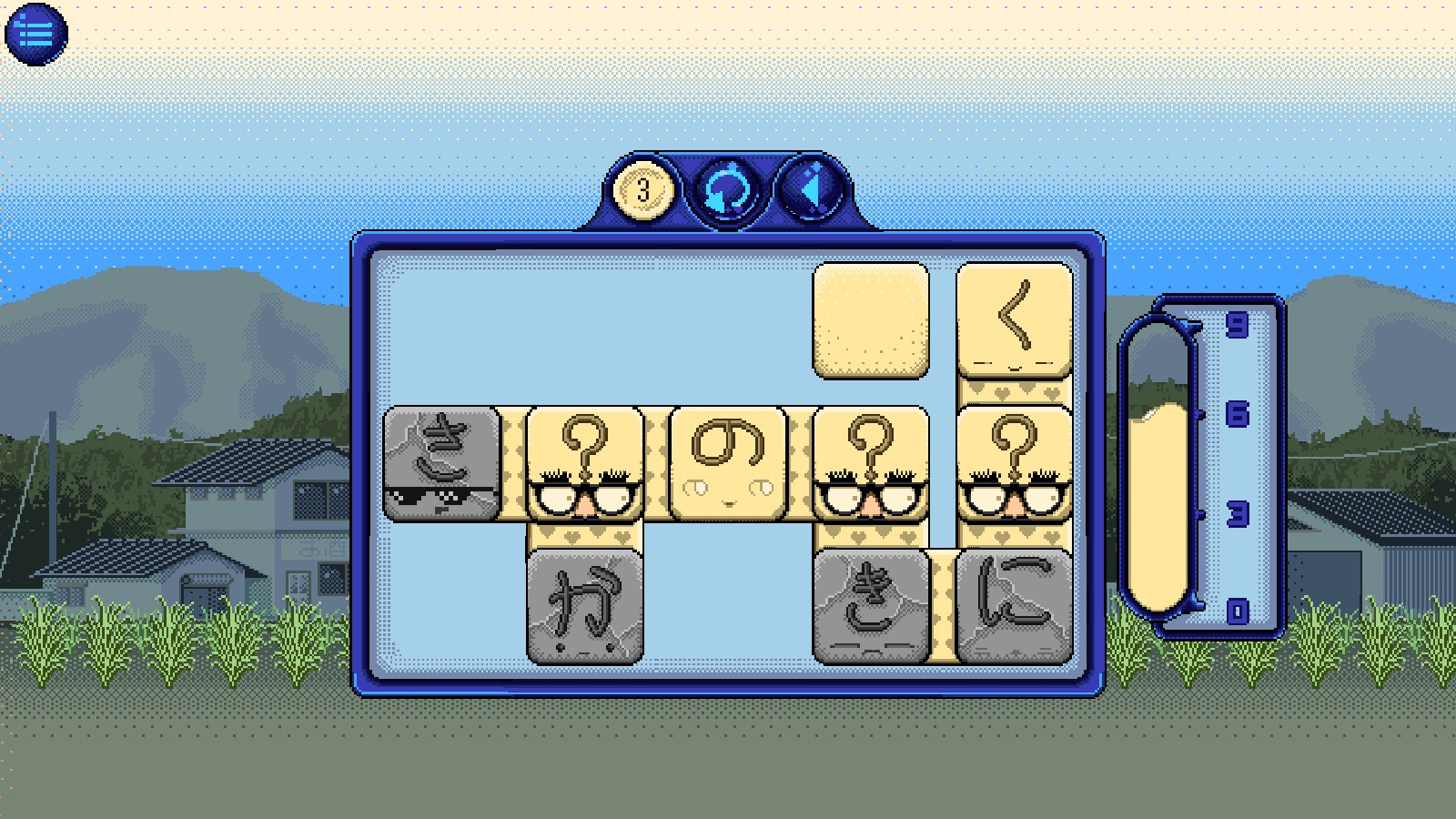 One of the worries with having 300 levels with something so basic is how can you spread this concept over them while also keeping it fresh and challenging. Kana Quest luckily knows this and actually addresses within the first couple levels. Each world, aside from the last, introduce a new mechanic. To name a few, you’re first introduced to stone blocks that can’t be moved and later mystery blocks that you have to figure out by what is and isn’t matching with it, ice blocks that slide, and slime that will alter a Kana. You’re given a couple of levels to get used to it before previous mechanics from other worlds are put in. So as the game goes in, it becomes more and more challenging. And man, does it get hard as you’ll slowly transition to having to plan out your moves. 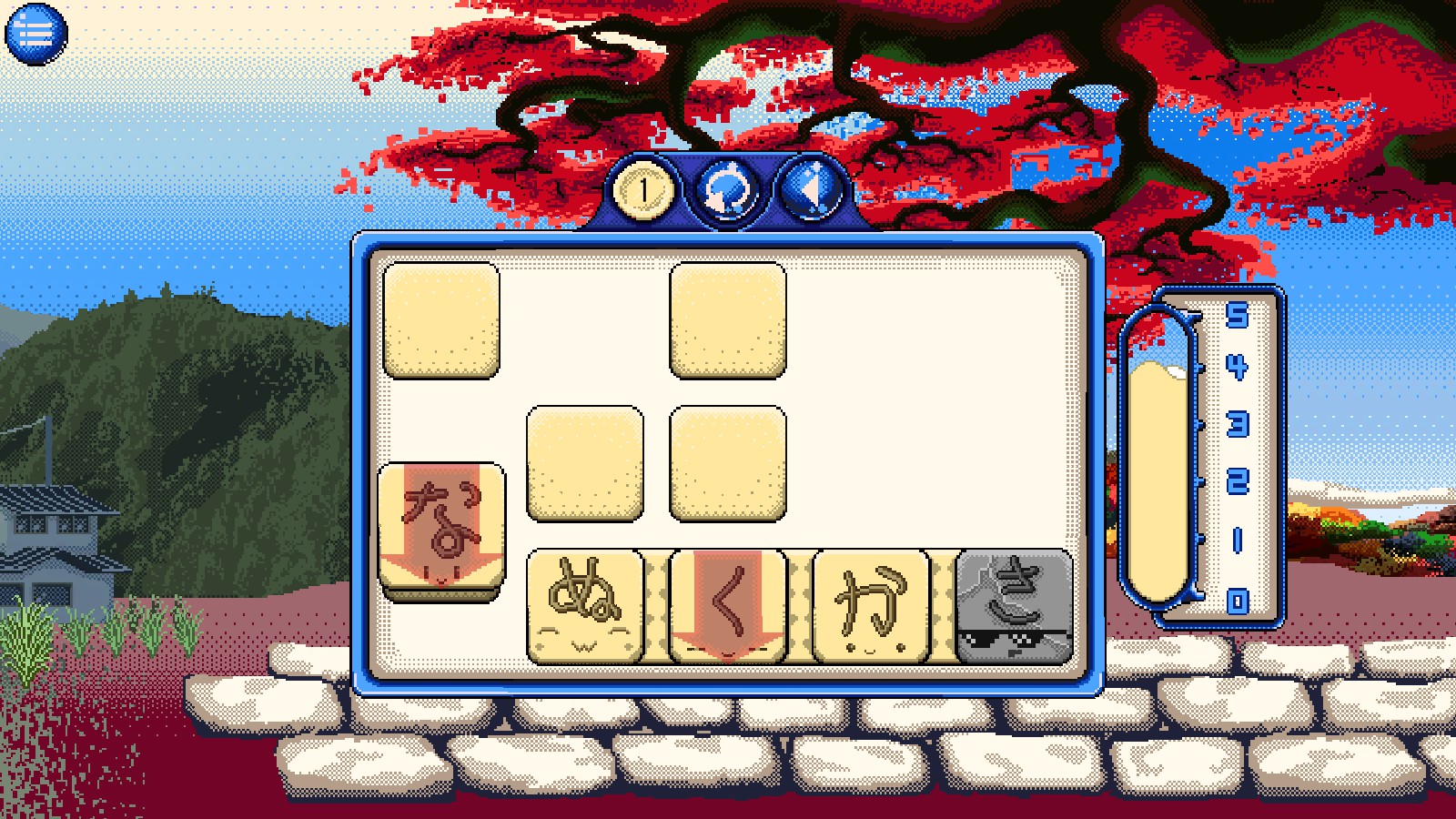 There is a small irregularity where Kana where the Romaji is three letters is shortened down back to two so matching them just by looking at the Romaji is smoother. For example, “shi” (し) gets turned to “si”. As long as you keep the normal spelling in mind (which is shown on the top right when checking the Kana blocks) as well as how you pronounce it, you should be fine. The only Kana that doesn’t follow this is the Combo Kana, which gets introduced at World 7.

One aspect that I’m just neutral on is requiring so many levels to have a gold medal (or finishing it with the least possible moves) to move onto the next world. On one side, it gets you to practice more, but on the other you might just not know how to achieve a gold ranking. Thankfully, you can just unlock all the worlds if you want as well as all the levels if you’re someone that likes to move on rather than being stuck. 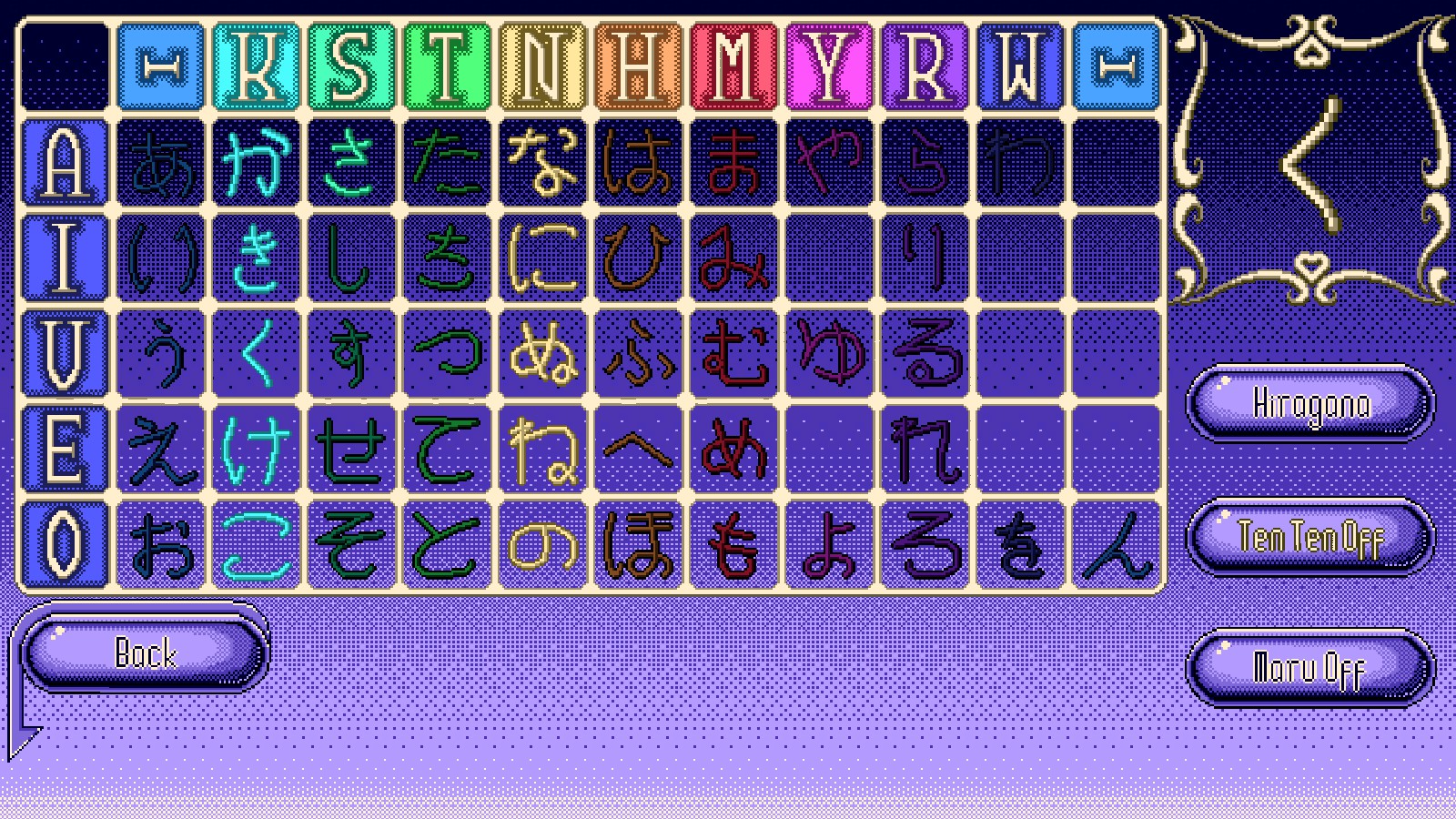 If you happen to already know Hiragana and just need to work on your Katakana, there is an option to enable it. I didn’t get into it (partly because the option wasn’t working at the time I was playing), but I suspect it’ll be the same puzzles just switched which Kana was used.

Even though you’re going to be staring at the puzzle grid as you try to figure out how to move all the Kana blocks to solve the correct puzzle, it doesn’t mean it doesn’t have to take up the whole screen. Each world features a different background to the otherwise plain grid as well as different music for each world so you won’t be listening to the same song each world. Each background looks beautiful as well as the music being pretty good at keeping a relaxing tone that pairs well with the background.

From what I could tell from the developer’s comments and store page, Kana Quest set out to do two things: (1) be a helpful tool for beginners to learn/test their Kana memorization and (2) have Kana Quest be fun and worthwhile no matter what level someone may be at. I can safely say that Kana Quest succeeded at both. Despite getting stuck a lot, I enjoyed my time with it and I soon started correctly recalling what most Hiragana (that I didn’t already know) was. While I can’t speak for anyone that isn’t a beginner, I do suspect that Kana Quest would still be enjoyable. Yes, part of the focus is on helping players learn Kana, but the rest of the focus is on the puzzle half. It goes from casually matching the Kana to thinking ahead and using your knowledge of all the different types of Kana blocks to complete the level. Not to mention figuring out how you can complete a level by the minimum amount of moves to move onto the next level or to get all the achievements.

So, if you’re someone that happens to like puzzle games and interested in learning Japanese, or just like puzzles assuming you’re past this step already, Kana Quest will be helpful in your journey. I do recommend checking what the Kana is less and less frequently as time goes on or only check if you’re not sure. And of course, check out other resources available to you such as apps (Memrise, Bunpo, Anki), websites (Tofugo), textbooks (Genki is considered the best by many), and videos if you’re planning to continue onward.