It’s like going back to the original – nostalgic, fresh and great… but with a lot less content.

My experience with Dungeon Defenders is rather minimal in comparison to a lot of my friends and other people, who I’ve seen spend hundreds or thousands of hours in it – it’s a fascinating game that raised such a strong and committed community that appears to stand to this day; the original isn’t dead and neither is the (quite controversial) sequel. Awakened serves as a reboot/remake of the original, with the greatly appreciated graphical uplift of the Unreal Engine 4 and giving fans a nostalgia trip to the greatness of the original that 2 failed to capture over a weak F2P model and a really weird design/direction.

Awakened is, sadly, massively overpriced for the given content (and especially compared to the original, a nearly 10-year-old game) which makes it a painfully difficult recommendation to newcomers – only diehard fans will get their money’s worth and even then I have my doubts. It’s a good game but it’s overall disappointing in the amount of content presented. 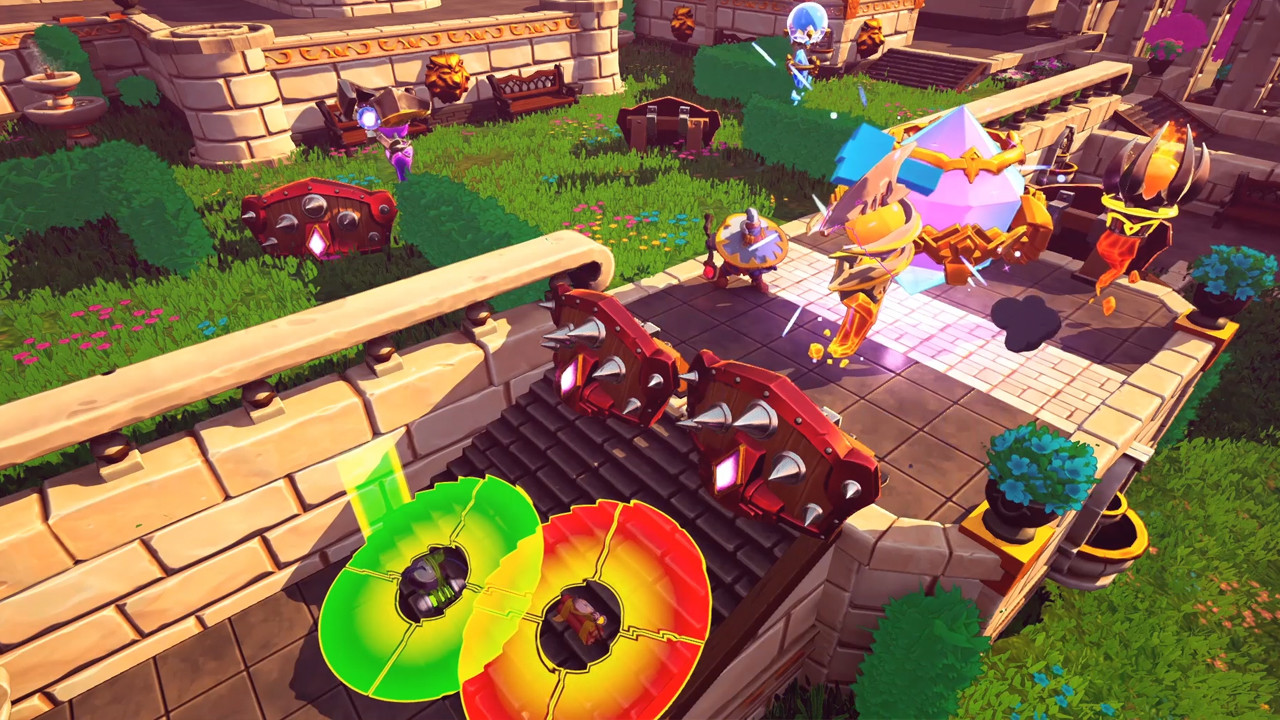 The core of the DD:A experience. A mix of third-person shooting and tower defense in arena-style environments is a great concept that the original captured really well, Awakened being very similar also does a great job at capturing this 2-way gameplay system.

On a more RPG side, you have 4 classes, all of them with their own attacks and abilities (and thus, their specific combat roles during the attack phase) as well as their own towers to place in order to defend the Crystal (in the center of the map that is attacked by enemy hordes until it’s destroyed, thus generating a game over). While playing, XP is gained and can then be used to upgrade your classes (all of them gain that XP, not just the one you used in a specific level, which reduces overall grinding in the game) in numerous skills – from damage dealt to max health and even tower enhancement abilities such as tower/trap damage, fire rate and health. It’s usually a good idea to focus certain classes in DPS for the attack phase while others to have a strong skillset invested in tower abilities, which allows for a lot of mixes and combos enhanced by the fact you can switch your class on the fly with F1-F4 keys (not during combat phases, though).

The combat itself is mediocre at best, sadly. The huntress uses ranged weapons such as shotguns, crossbows, etc. and they feel pretty bad much like the apprentice’s magic staff attacks; the squire is the only dodging it with his sword feeling pretty good to handle – it ended up being my combat character because it was the only one that actually made me feel like I was doing damage to the enemy and not giving them a few tickles. 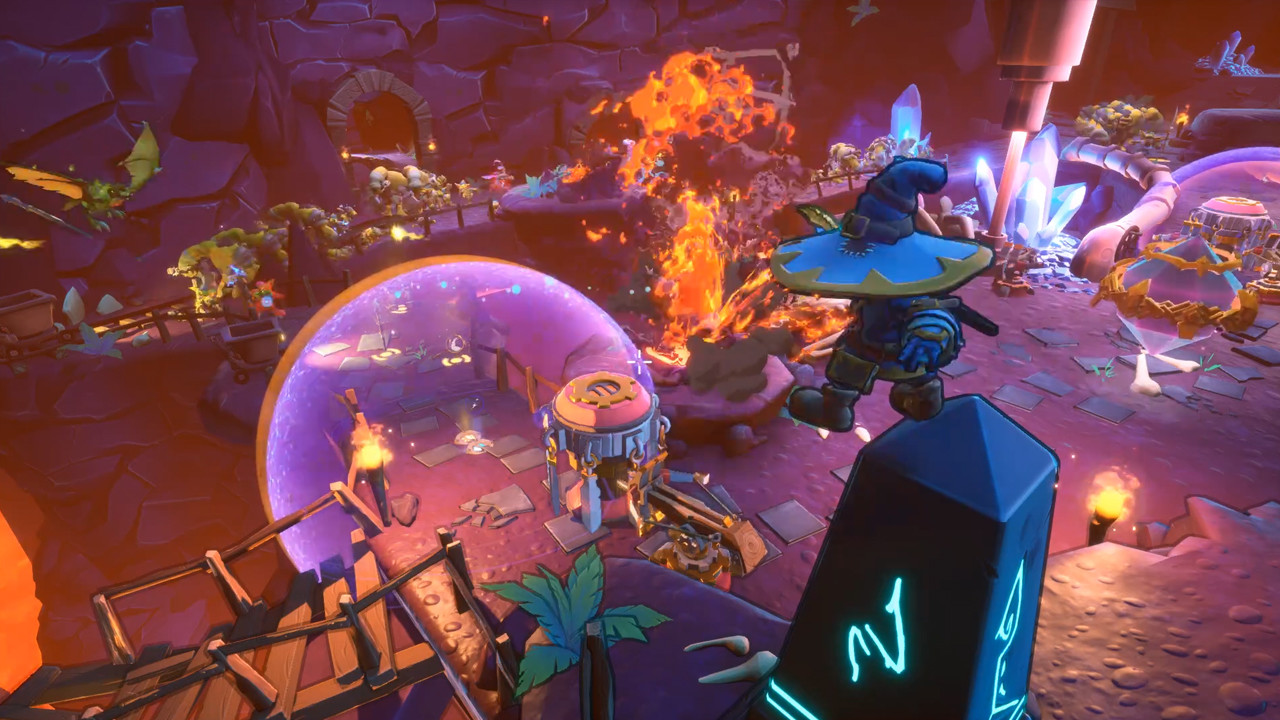 Another component of the RPG aspect of the game is the loot: classes can be customized with gear (arms, legs, chest armor, new weapons, etc.) and the loot system of this game is the most brilliant example of quantity being quality. This isn’t sour grapes at all about the fact that most of my loot was straight trash… it’s more that after every single wave you can open a loot chest, enemies drop loot, etc. so by the end of a single campaign level defense you’re literally BATHING in loot that is 98% common minimum. Most of the gear is completely useless, underleveled (or even overleved, I had a friend getting level 5-10 armors in his first game ever!) and makes the overall aspect of the loot feel… useless.
Loot should make me feel rewarded or even motivated to keep grinding, check stats and special effects that change how you play. In DD:A, however, you get inventory page after inventory page of dozens of loot items that you seriously do not care about AT ALL because it’s all literally a downgrade of some common gear I found 2 hours ago when I was 5 levels below my current one! You can at least sell the loot you do not need, which gives you gold, another problem of the game (although more understandable) – you cannot do anything with the gold at all, so you’re stacking it all for a feature that didn’t even arrive in the game yet, as it’s in Early Access.

The tower defense component involves placing traps and towers to defend the crystal, which some neatly complementing each other: poison stun traps at the spawn games is a great way of grouping enemies and making placements in deeper parts of the map far more effective, especially when enhanced by auras placed by one of the classes (the Monk) which are absolutely crucial for end game-high difficulty defenses. Most of the towers seem decently balanced and each class fits the roles they originally had in the first Dungeon Defenders, without anything being significantly underpowered or overpowered (seriously, the Monk is crucial though).

By the end you’re left with a 12-level long campaign plus a survival mode (that by the end will literally lag so hard you’re better off playing the campaign until the performance is patched) that feels a bit too short at the gigantic price of 34,99€, which isn’t helped by the average at best combat and one of the most boring loot systems I’ve ever had the displeasure of experiencing.

The Unreal Engine 4 upgrade is great and the game’s usage of cartoon-ish graphics with UE4’s fantastic lighting and effects makes the game a joy to look at while playing, especially in the more chaotic moments. The saddest part is that the performance is absolutely terrible and despite a hefty graphics options menu, no setting allows you to avoid memory leaks and FPS dips to the 10-20’s on very crowded waves (especially in survival), rendering the game a very tedious and unrewarding experience because it’s just not fun to play at those framerates, and I mean this on stronger PC’s than the recommended settings (mine being an i7 7700k and a GTX 1060 and my friend (who also got the game) having a GTX 2070), which is absolutely unacceptable. 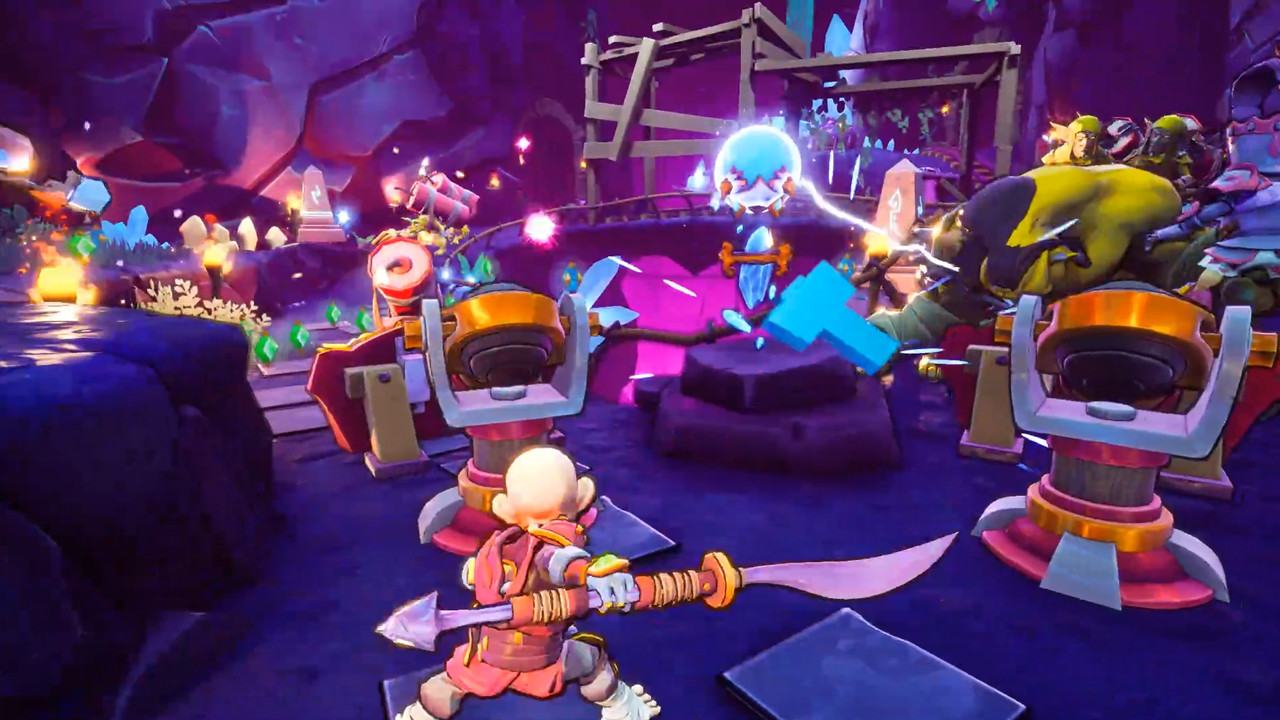 As far as audio is concerned, the game is a mixed bag, as there doesn’t seem to be enough audio feedback of the enemies attacking you even at close range (and the visual feedback is weak as well), your attacks are also weak except for the above mentioned Squire, whose sword packs a surprisingly fantastic punch to it and feels great to swing at the enemies. The music overall is a solid soundtrack but I could use a few more tracks and more varied.

A fantastically unique concept executed pretty well overall with a solid class-based RPG build system tied to a solid Tower Defense system. The loot system needs massive improvement and balancing and the overall performance is nothing short of embarrassing but the real killer is the price – at the current ratio of content, quality and bugs (there are quite some, though not game-breaking, those seem to have been thankfully fixed) and the price of 34,99€, Dungeon Defenders: Awakened is worth a follow and a buy… on a massive discount. Once content arrives and the game runs better, I can recommend it on a smaller discount, but I still find the current price way too exaggerated for the presented product – its value can only be determined by the future content to be presented, it’s a matter of seeing how much the developers are going to add in the upcoming months.