Aside from a pimple picking the worst time to say hello, getting sick is the worst especially when you already have plans. Not only will you feel absolutely terrible, but it lasts for at least a week and there’s a chance of having to throw up. If only there was a way to get over them quickly. Well, WayForward’s new Switch exclusive title let’s us fantasize about this as we take up the role as the vitamin. This mysterious vitamin holds our silent protagonists Vita-Boy and Mina-Girl as they steer their capsule ship and kill harmful bacteria. 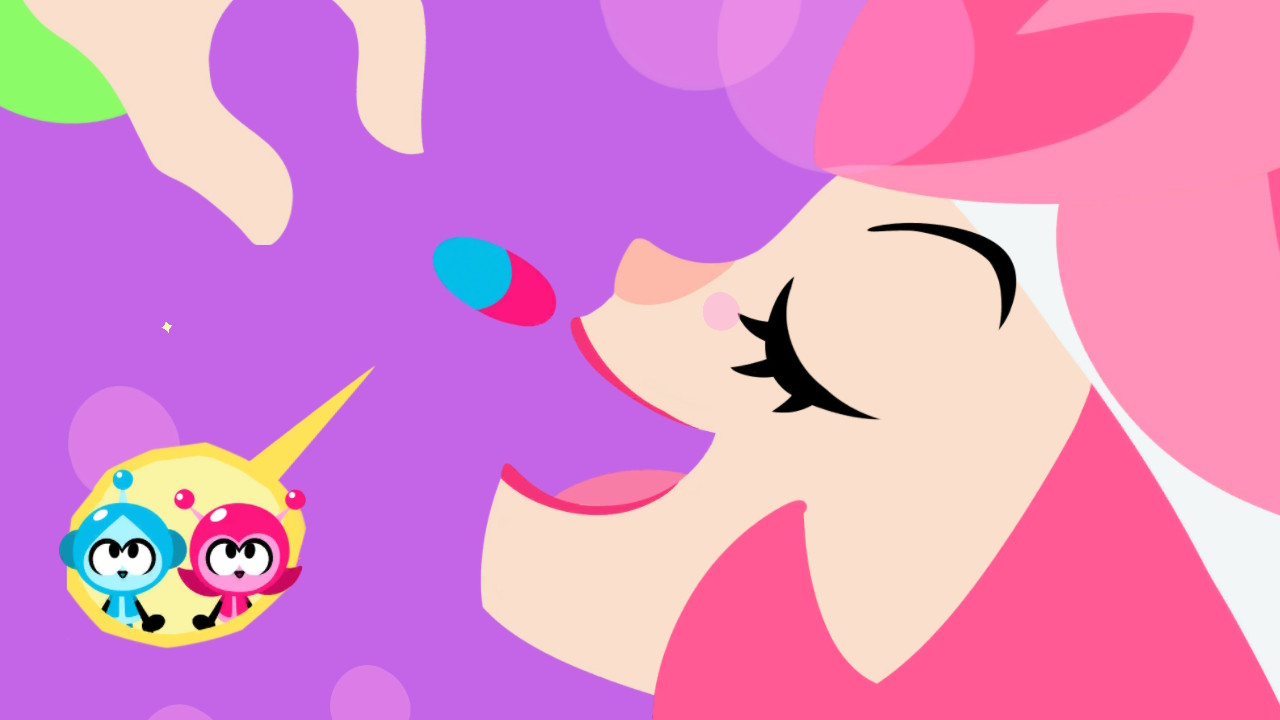 Featuring six levels, you’ll be greeted with a colorful cutscene to introduce you to which Sable family member is sick and in some cases how they became sick. The level truly starts once your ship, or the vitamin capsule as others see it, is swallowed. From then on, you’ll control the capsule ship as you’re autoscrolled though the body. Of course, this is going to be a bumpy ride. Nasty bacteria itching to take you down and mucus blocking your way can be shoot by your vitamin beam, obstacles that rotate with you, colored strings that can only be cut by the corresponding ship side, and the walls. Luckily, health sparkles are plentiful as you can shoot red spots in the wall or hold on till they pop up in your path. Though, being left behind by the autoscroller will ultimately be your end if you’re not careful. 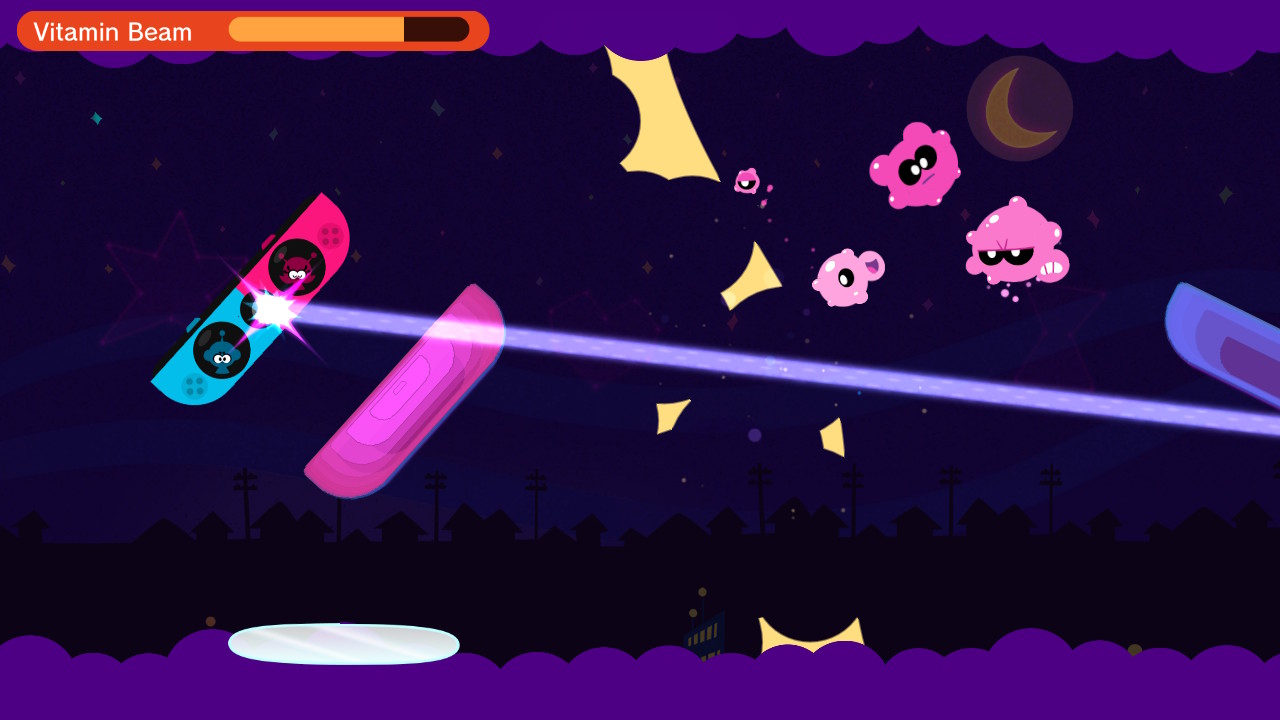 Once you finish the first level, you’ll also unlock the claw that is controlled by tilting the left Joy-Con while holding down a button and closing it with the right stick so you can move objects and defeat a certain enemy. The claw was awkward to handle most of the time for me and it took a couple of levels before I adjusted to it. For this, I recommend playing with the Joy-Cons detached (whether one in each hand or in the grip) as it felt much better than playing in handheld mode. Though this also opens to unintended rotating. 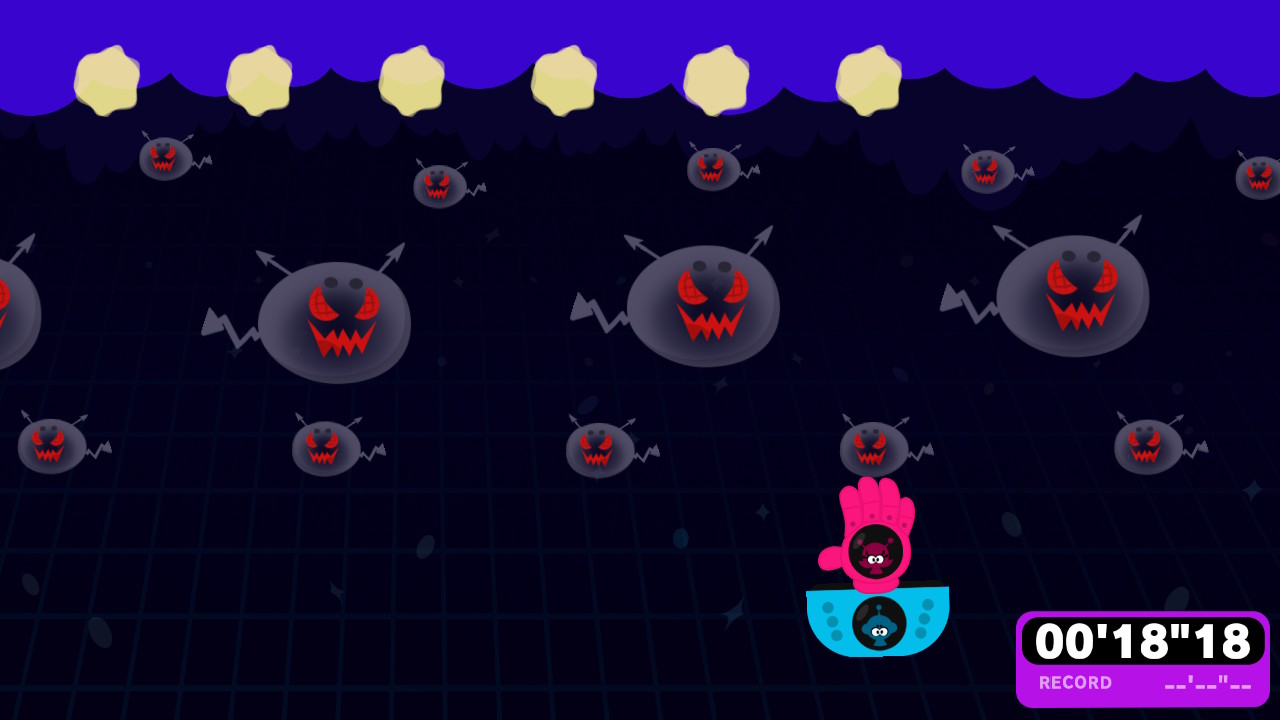 To cure the host, you’ll have to get to the vital locations and restore them. Once you get to one, you’ll be greeted with a minigame to complete. There are a variety of minigames you’ll have to complete so you can continue on and some of them are better than others. One that I didn’t care for was Grab Fever (which requires you to grab yellow blobs while trying to dodge bacteria), but the others like Wire Coaster, Dance Festival, and Medicine Ball (aka Ping Pong) were better. As you continue through the story, they’ll get harder and harder so be ready to be stuck for a few minutes. After encountering a minigame it’ll appear on your menu so you don’t have to go into story levels to play them and you get to see the wonderful art associated with each. However, you’ll have to complete the story to unlock all the levels in each minigame. 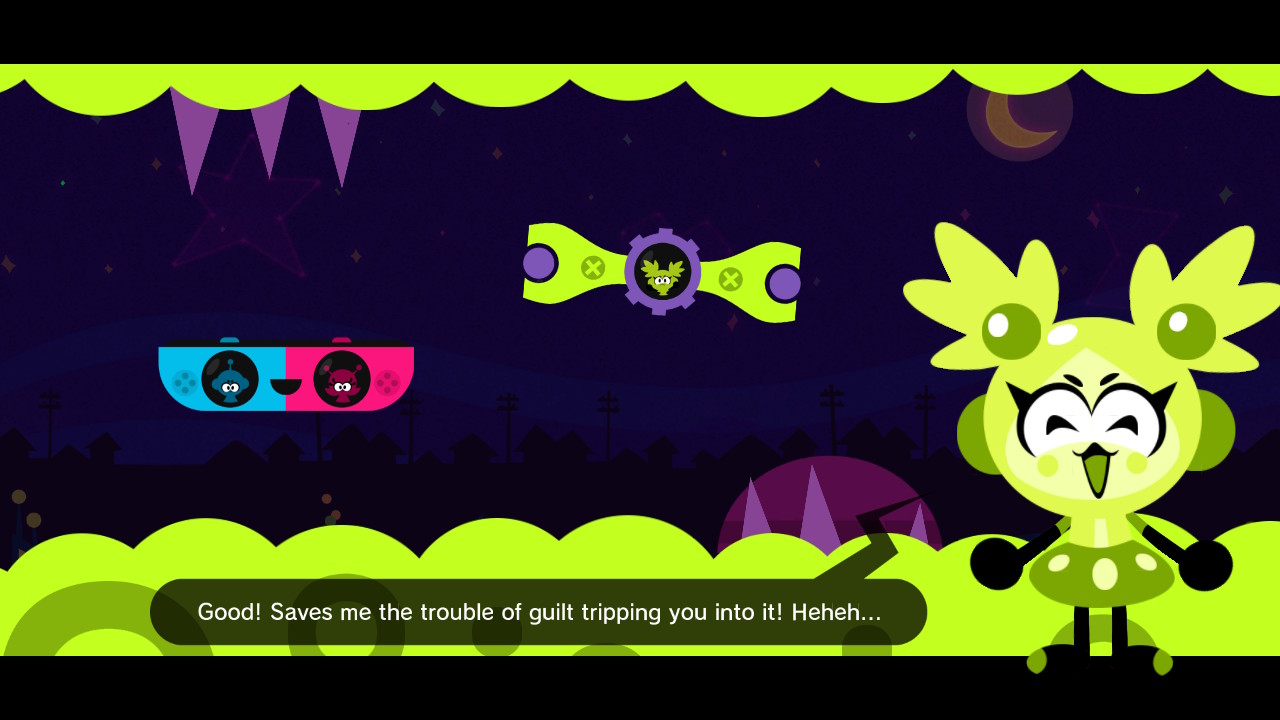 All levels, except the last, also have star collectibles. Each level has five stars and are hidden around requiring you to go to other paths that you didn’t have to go down, move shapes or shoot mucus to uncover them, or challenge you to grab them before you scroll past. However, I do recommend trying to grab them all (except one in the first level that requires the claw) on your first run as it will only register if you finish the level. Grabbing all the stars will unlock a bonus level that more or less include the featured family member like the first bonus level will have you cure a whale so the Sable boy can have a fun time at the Aquarium.

If you manage to rope in a friend, co-op mode plays a little bit differently than when you’re playing by yourself. One will hold the Joy-con normally and controls movement, the claw, and when the vitamin beam activates as they control Vita-Boy; while the other holds it horizontally and controls the ship’s rotation, can close the claw, and aims the vitamin beam as Mina-Girl. 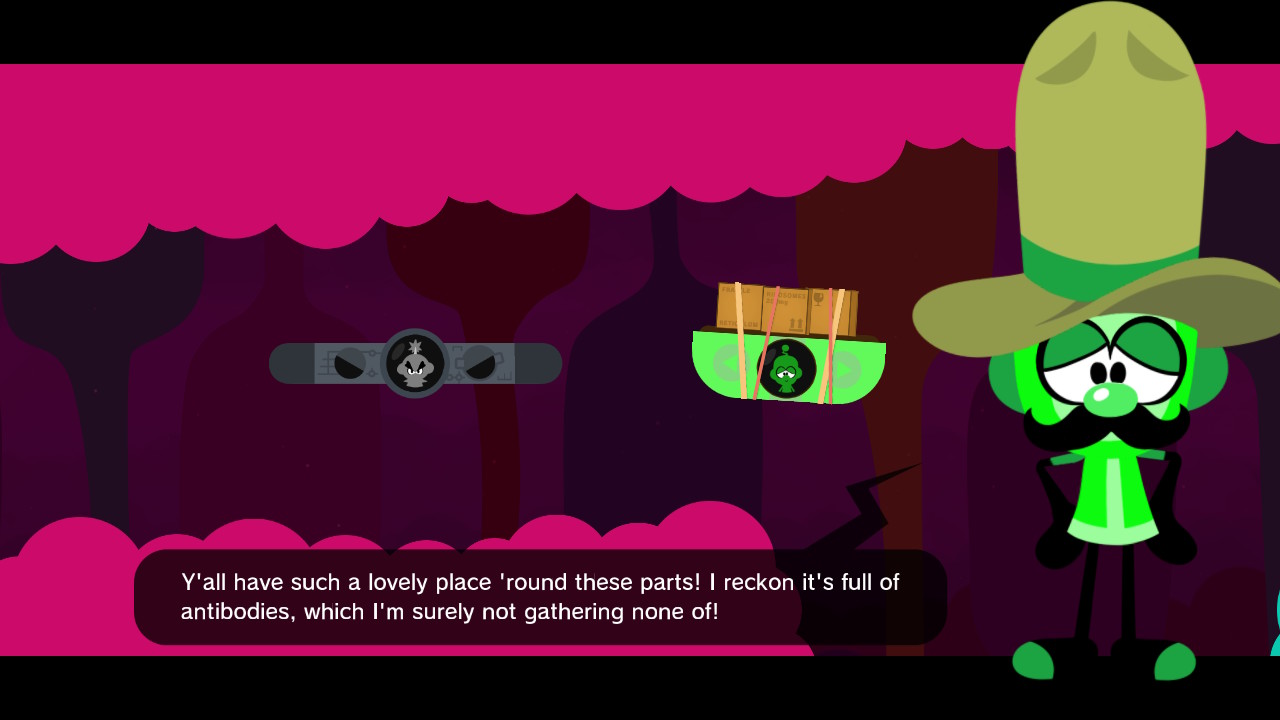 Once you finish the main story, you’ll then unlock a new mode called New Game Pro. In New Game Pro, you play as Pro-Biotic a little bit before and, most likely, during the main story. You’ll be retreading each level, but there are some minor differences. You won’t get any cutscenes apart from the intro, Pro-Biotic’s ship has two lasers, you can cut strings no matter the color, the levels are slightly different (with some obstacles and enemies showing up earlier), minigames are harder, interactions with other characters are not as often, and it seems we have the case of an unreliable narrator here. Stars also increase from five to six and become much harder to find to the point where some of them are only visible when entering on a certain side. While I managed to find all the stars in the main story, I only found all of them in one Pro level with me missing one or two in the others. The bonus levels in New Game Pro are different as well with them focusing on the other person that was also involved. Like Level 3’s bonus stage is with the guy rather than the girl. 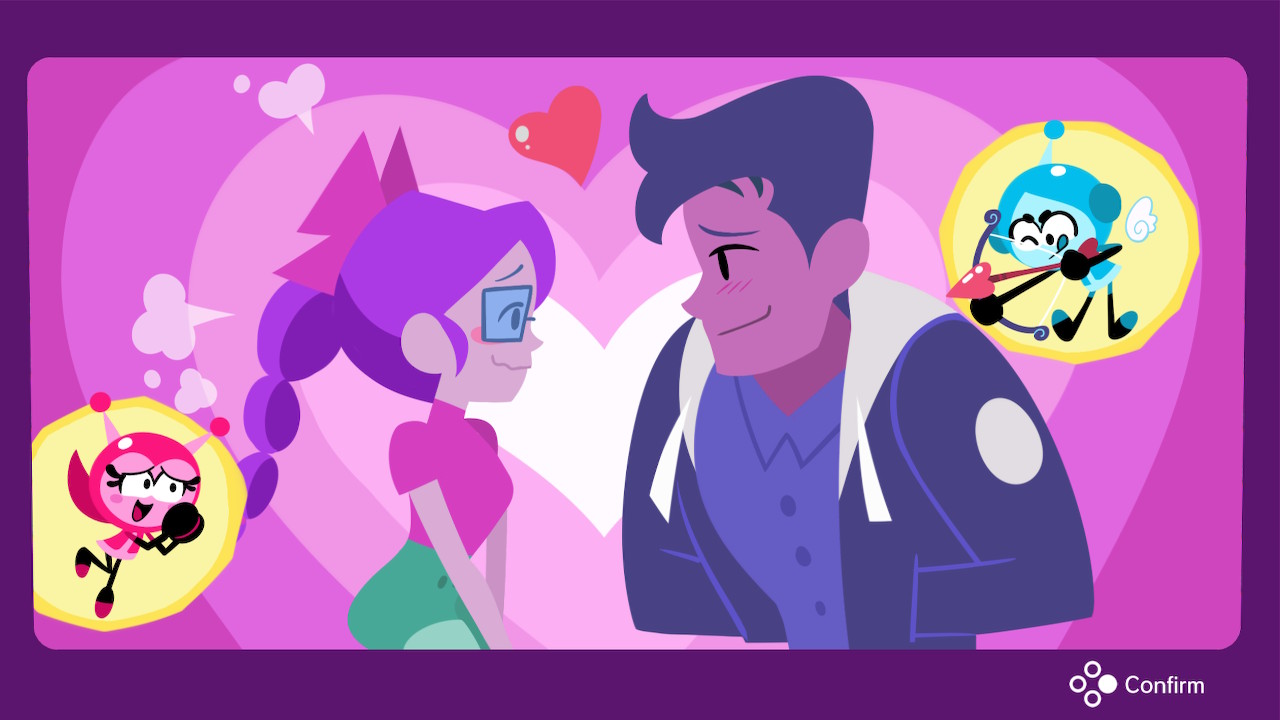 At the end of the day, Vitamin Connection is a delightfully cute and fun game. Despite being frustrated at certain parts like controlling the claw and some strings being difficult to cut causing me to be left behind by the autoscrolling, I enjoyed playing through the story. Each character you’ll meet in the levels are wonderful (from their voice-acting to their cute design), the upbeat soundtrack is great, and the difficulty curve was handled well. I couldn’t stay away for long and if I didn’t have to sleep I probably would have finished it the night I started. Thus, if you don’t mind some wonky motion controls (especially during co-op as the second player will have to reconfigure a lot) and love the presentation, you’ll most likely enjoy Vitamin Connection as well.