PREVIEW: My Name is Sarah

“I don’t remember anything except my own name.”

My name is Sarah is the debut Steam title from DMT Production. It’s a survival-crafting exploration game with a weird setting; while the game world appears to be a sort of fantasy world, the introductory video shows the titular Sarah lying down in a futuristic setting, her head enveloped by what I assume is some sort of technological device for immersing her in the game world.

In its current state, from what I’ve seen after a few hours of running around, none of that really matters yet, but it sets the scene for what might one day be an interesting story, anyway.

My Name is Sarah has weird production values.

The introductory video is well produced using mostly in-game graphics, showcasing the lush, beautiful world and the equally beautiful Sarah, but also immediately revealing one of the game’s graphical shortcomings: the rather poor quality animations. Mostly everything looks great when it’s static, but models seem to have too few bones, and animations too few frames and poor blending, leading to animals and people often looking unnatural and wooden when they move. Sarah’s body shows no physics-based internal movements — a huge lack when you consider her massive mane of hair, which fails to move independently of the rest of her body at all, like a big block of hair-coloured wood stuck to her head. 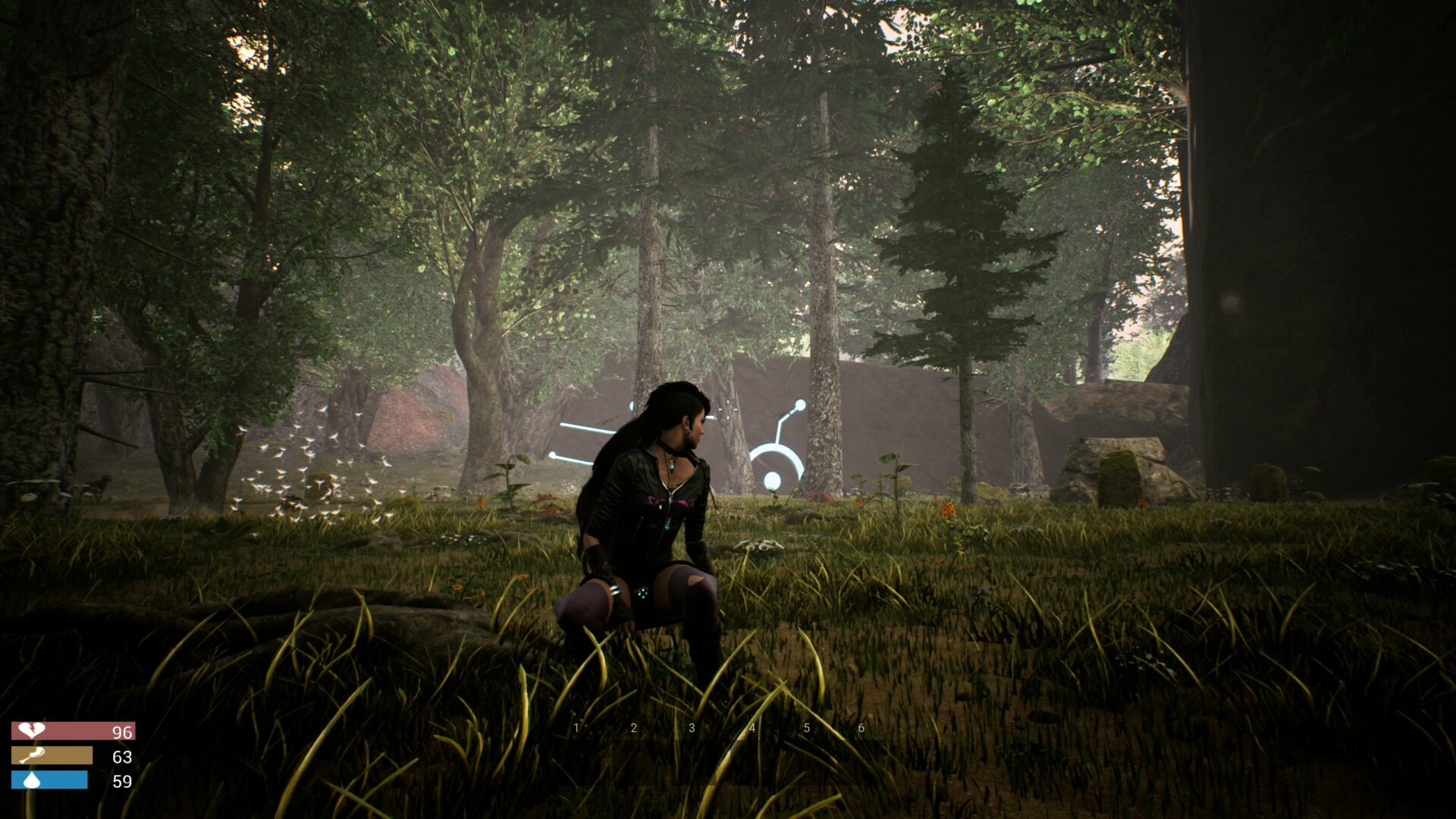 Clipping is another significant issue, with Sarah’s hair and body often clipping through her clothes or backpack. Together with the wooden animations and plastered-on hair, and the strange decision to make her turn her head violently from side to side when you rotate the third-person camera in front of her, the overall effect on the lovely high-quality character model is to make it look last-gen, and rather out of place in the world around it. 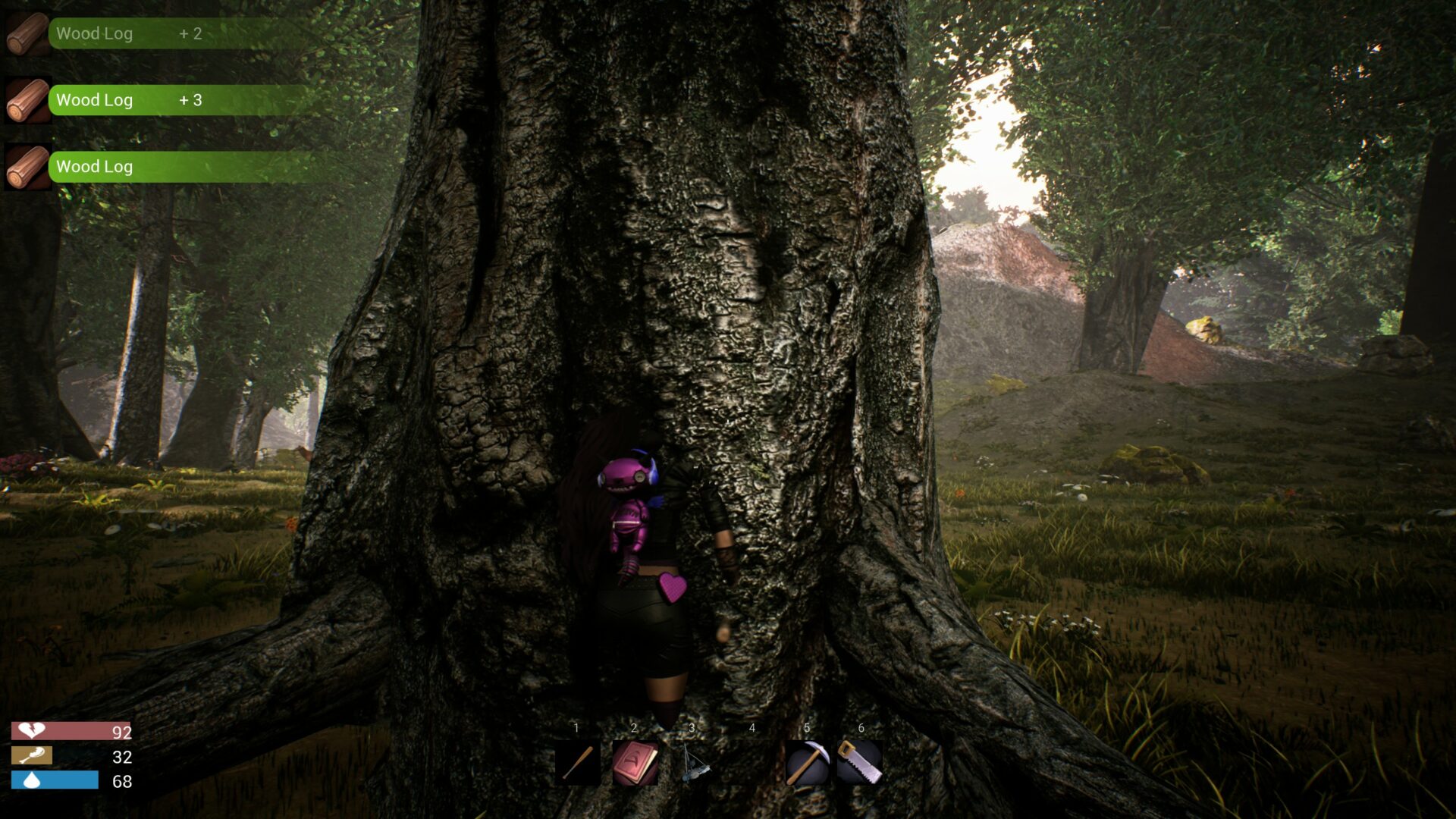 This quality dichotomy continues throughout the rest of the game, too. The UI is mostly well laid out and nicely coloured, but then it’s been populated with a character equipment portrait that is so dark as to be unusable and appears to be a badly taken screenshot of Sarah, names and descriptions heavily scattered with spelling errors, and icons that don’t represent what they’re supposed to and look out of place amongst the rest of the game: a burning torch icon representing a LED flashlight, for example. 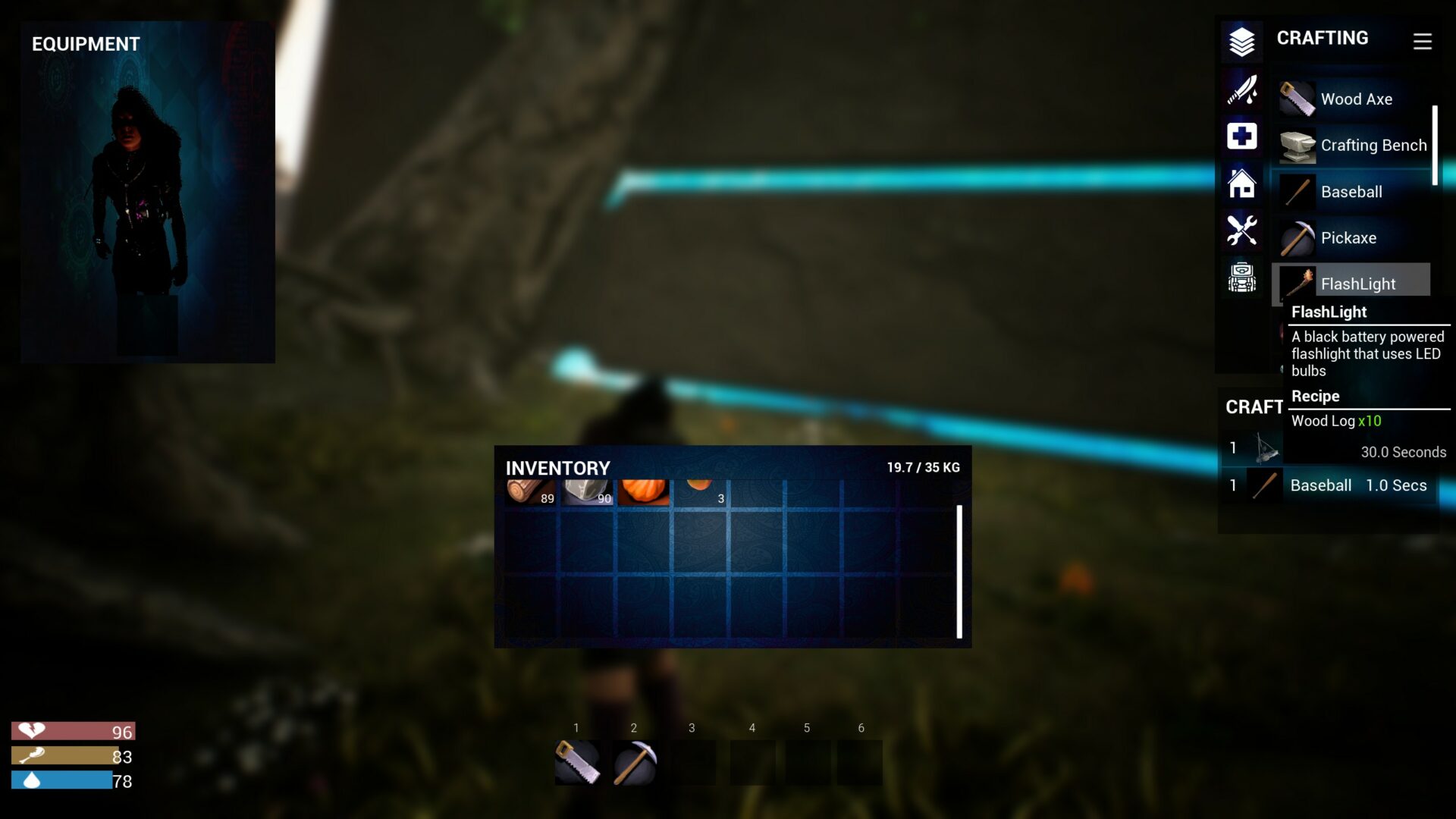 Music is nice and atmospheric and background nature sound effects are pleasant. Sarah’s accent in the intro is hard to understand and her jumping noise is irritating. The “pew pew” sounds and spoken lines when you mouse over the main menu buttons are just plain weird; I wonder if they were a developer joke that was accidentally left in for release.

In some ways this mishmash of qualities is exactly what you’d expect from a game that’s just entered Early Access, and I hope that the developers plan to fix these issues as the game progresses. I mention it anyway, because much of the game looks so good in screenshots, but the impression it gives when it’s moving, and once you delve into its interface, is far different. 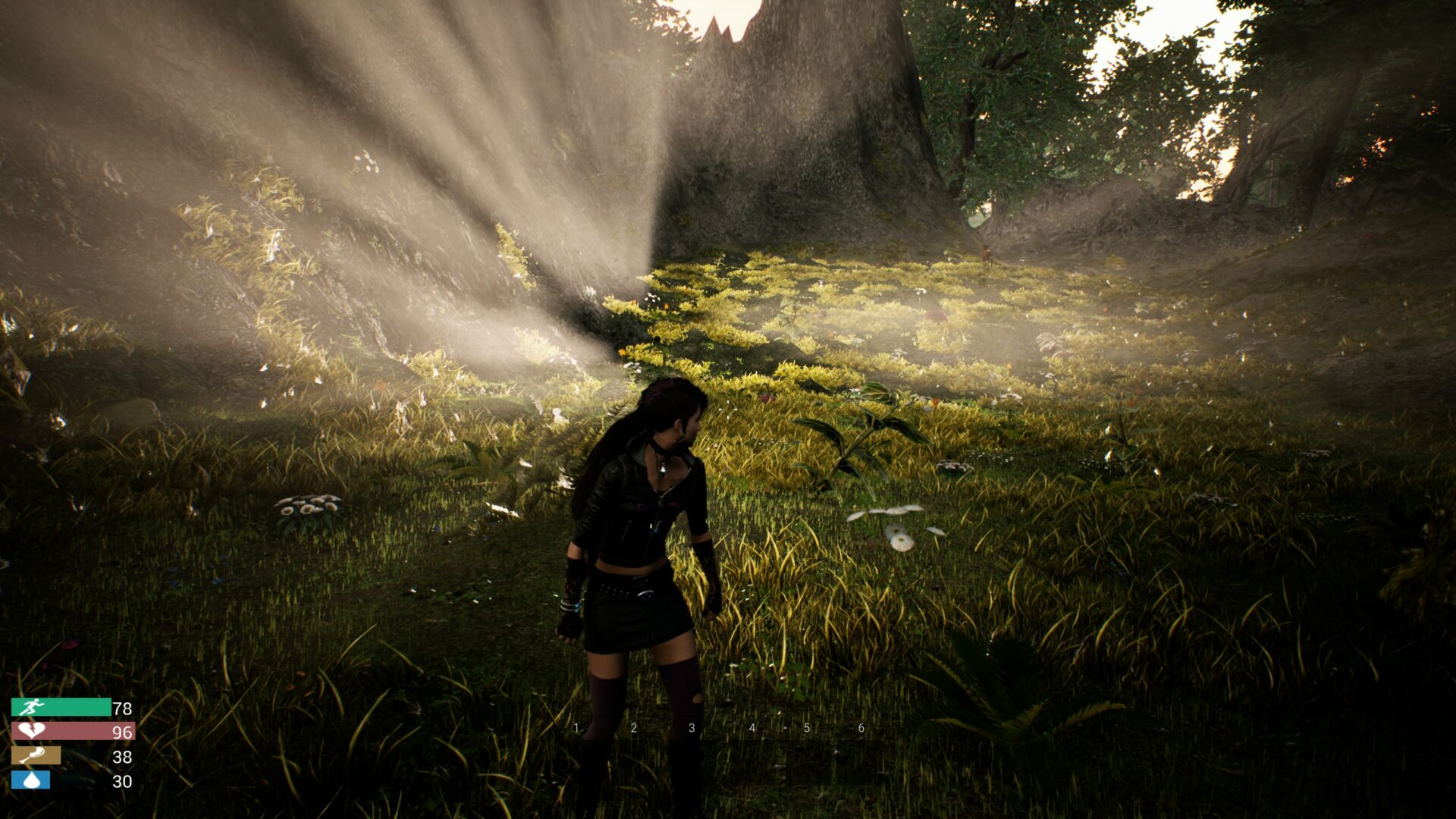 So far the gameplay appears to be typical survival-crafting, with a big world to explore. I’ve only managed to play for a few hours, however, and don’t plan to play any more until the game has significantly improved. It plays like there are basic place-holder modules for a number of game features and functionality, but none of them are well thought out or detailed enough to actually be any fun to play.

To begin, there are only two harvestable resources that I’ve found: wooden logs and stone. You get stone from some large rocks you see in the game world, but not all. You get wooden logs from almost everything else: sticks, trees, and, strangely, small flowering bushes. You get so many resources so quickly, that you may as well just get them for free; there’s no challenge and no fun in the process, and no real sense of achievement. Sources of wood also respawn after a few seconds, so you don’t even have to move very far. Just stand next to a tree and keep chopping … 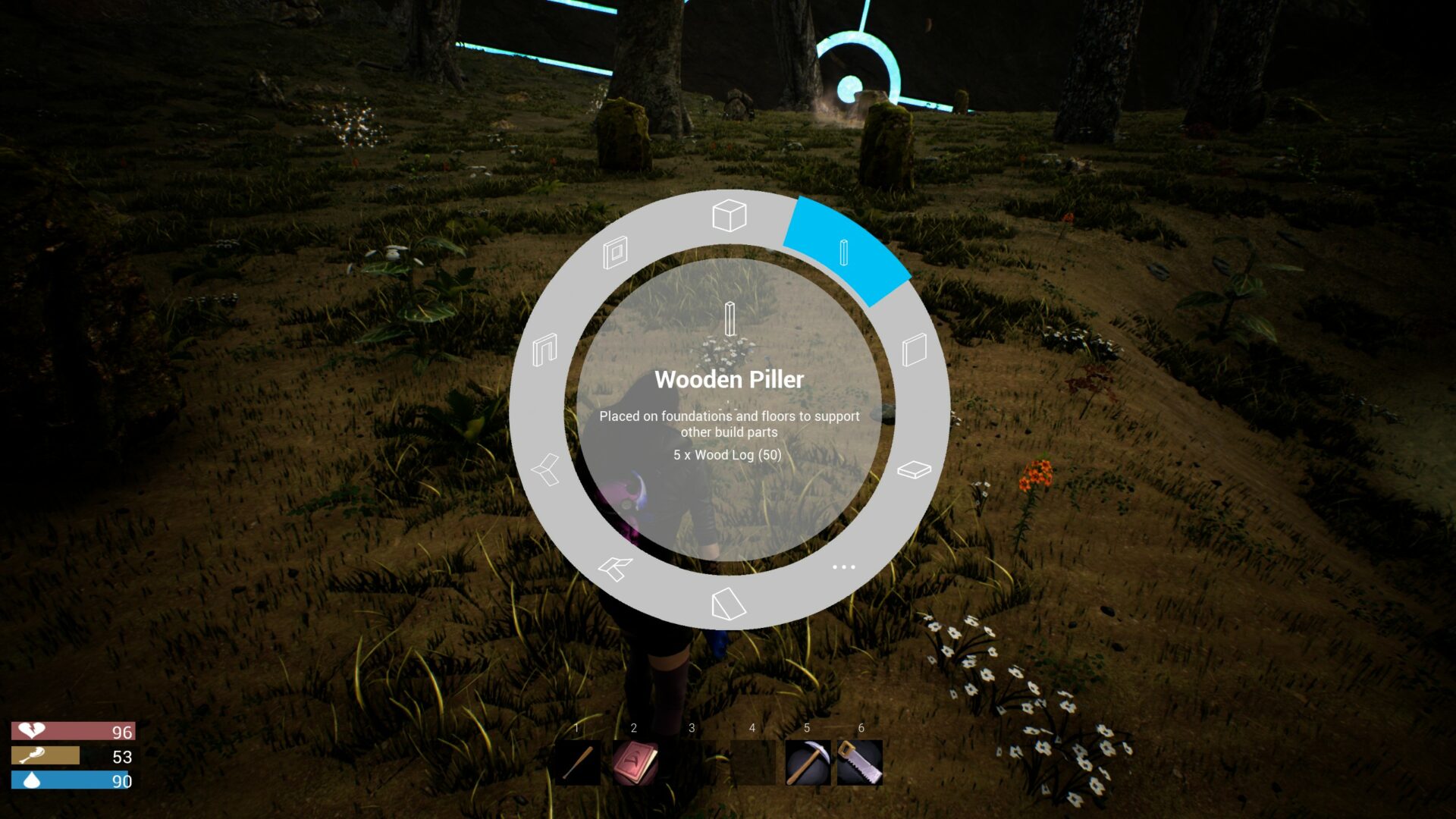 There aren’t a lot of useful things to craft, either, with a good portion of the crafting list being filled with aesthetic items such as tables and chairs. There’s a single crafting station and a “furance” (sic) for smelting ordinary rock into bars of iron, and you can make various lights and chests, but many of the resources required make no sense, there’s no way to compare items of similar types (there are three different chests; which is better?), and ultimately there seems to be little point to doing it at all. Again, it’s a token effort in need of major expansion and improvement. 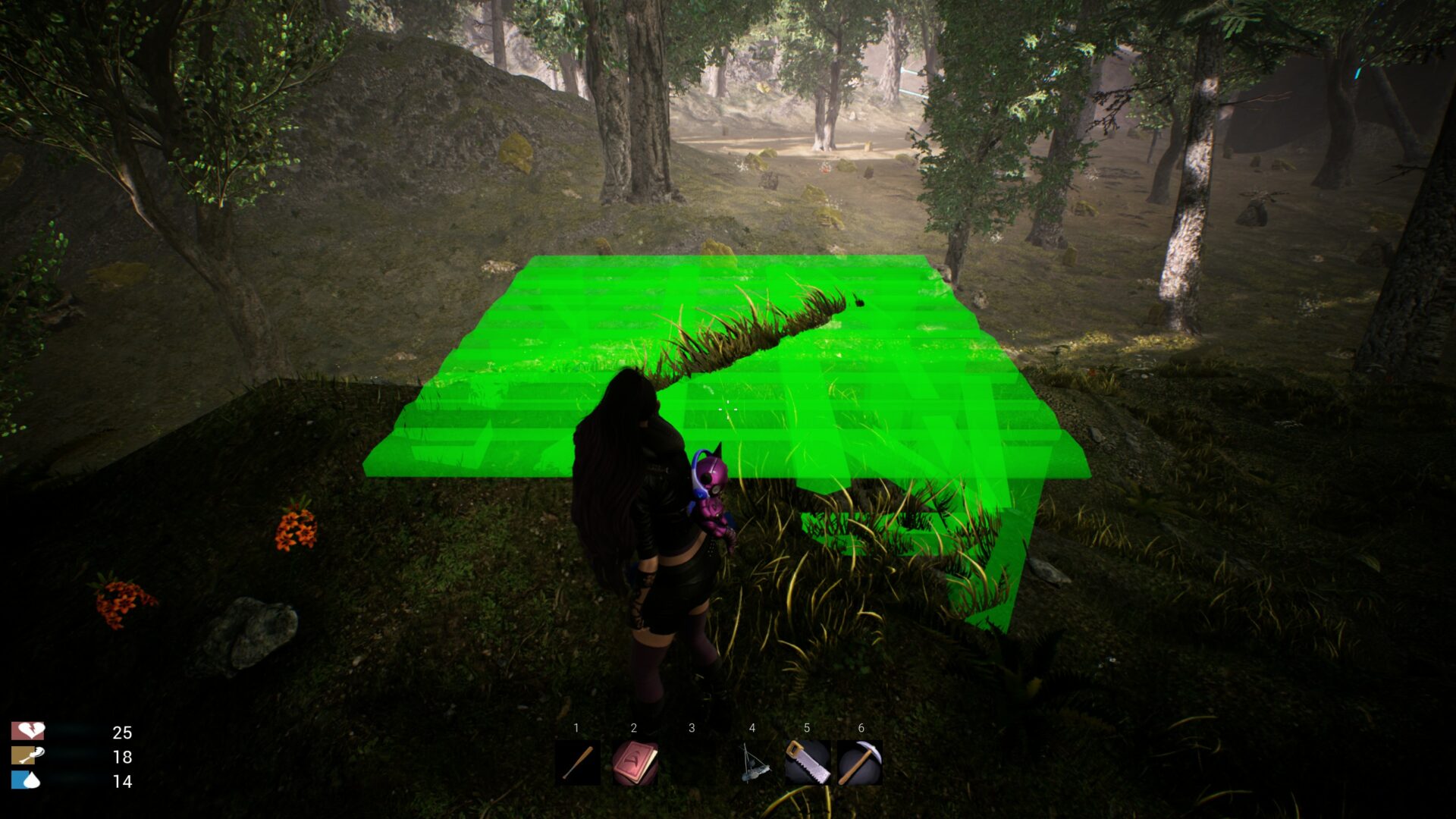 The building interface, when it works, is okay, but the game is way too restrictive in where it lets you build — rage-quitting so! Apart from that it’s probably the most stable subsystem, though. Survival consists of eating food and drinking water whenever you can, as your hunger and thirst bars decrease far too quickly. Perhaps in an effort to counteract this, and because the only other way to get food or water appears to be chopping down trees and eating the apples that drop from them — yes, all trees drop apples — the game has little tornados of daffodil seeds that spawn random consumables. Mmmm, raw meat from a flower tornado? Yes please! 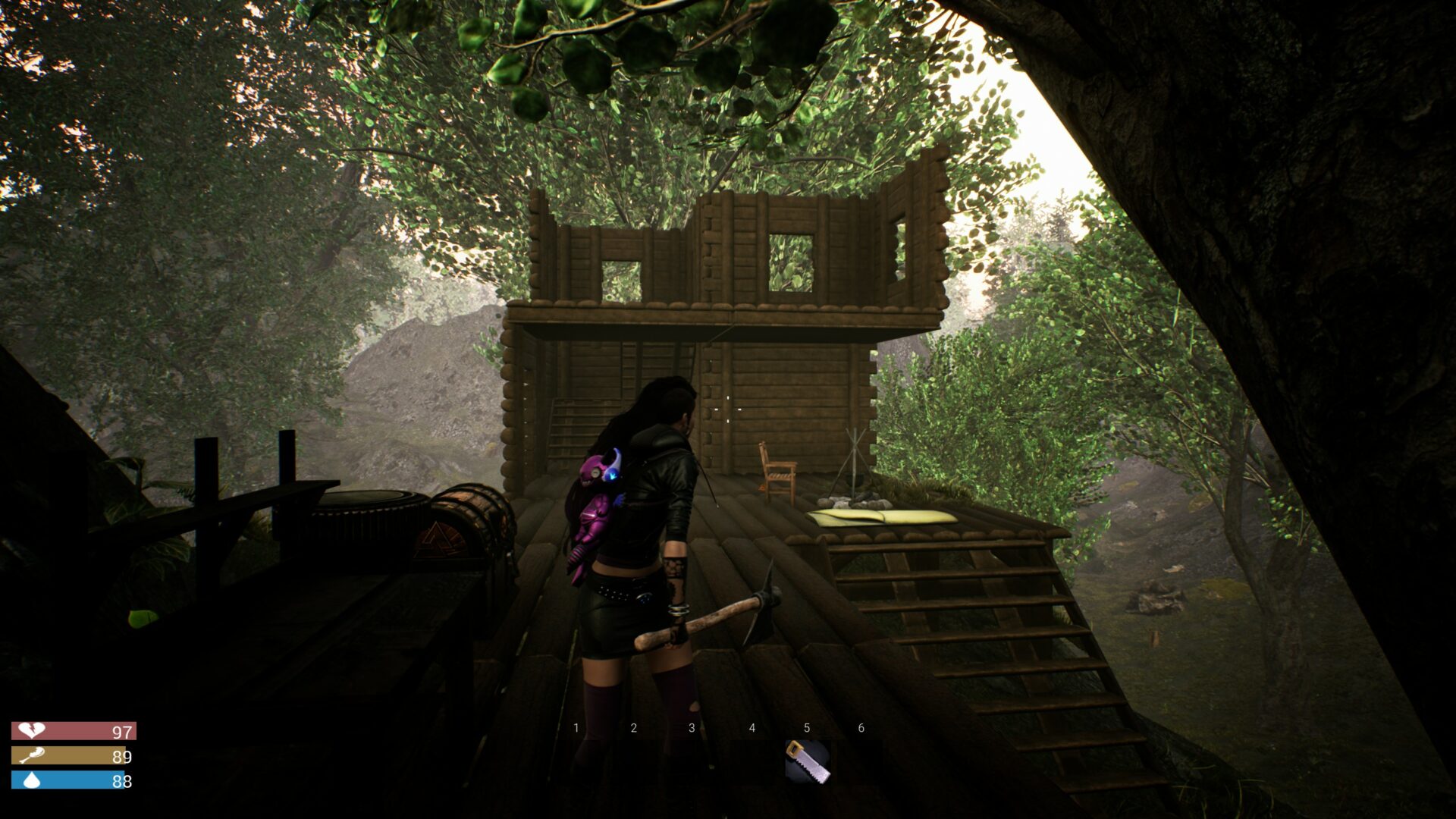 Combat should simply be avoided. The only enemies I’ve found run at the same speed as Sarah, do more damage than Sarah, and take more hits than Sarah does, so once they’ve been pulled, they’re basically a guaranteed death sentence. Combat is melee only with no indications of damage whatsoever; you’ll just see Sarah’s health bar decreasing until she dies. The game would currently be better off without it, even though there’s nothing else to do.

So, crafting is a bit of a non-event, building is finicky, survival is a hassle, and combat isn’t worthwhile. What does that leave?

Well, it looks as though it has quite a large and nice-looking game world. But there’s no map or compass, much of the landscape looks basically the same as what’s around it, creatures that you accidentally pull by wandering too close pursue you relentlessly, and, if you do happen to die, you lose everything you’re carrying, since you’ll have no hope of finding the small unmarked inventory sack that drops at the location of your death. So exploration of this world seems to be actively discouraged.

In spite of this, I spent a couple of hours heading off in random directions from the starting location and I found a couple of interesting locations. Both of them were inhabited and resulted in Sarah’s death, but this at least suggests that the world has a few things to see. I suspect at some point there will be a story woven into this, too, allowing us to somehow return Sarah to her normal world, but at the moment exploration is as frustrating as most of the other elements in the game, so any existing reward would have to be very great indeed to warrant the effort.

I’d suggest that a map that gets filled in as Sarah explores, similar to 7 Days to Die, would be a great addition to this game, and a craftable compass or some other sort of navigation device would be a boon, too. 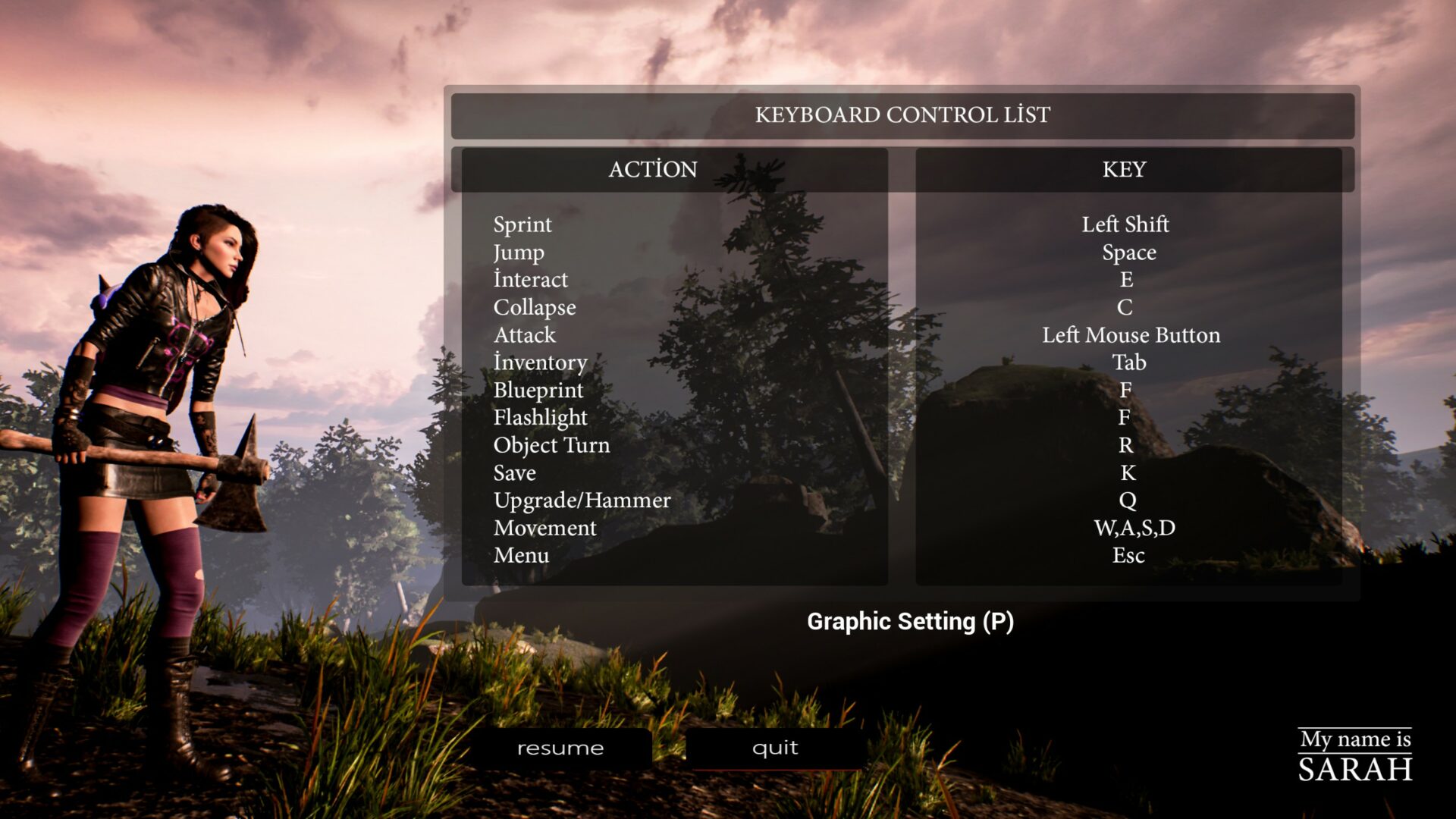 My Name is Sarah, like most EA games I’ve played, has bugs. From trivialities such as the devs leaving Unreal’s VR mode enabled, causing Steam VR to start up for anyone who has it installed, broken lighting and other minor graphics issues, or animals that stop moving about the world — birds performing their flying animations and going nowhere, for example — to major frustrations, such as the ultra-finicky building placement code, that had me spend literally over half an hour trying to find a single location I could place a wooden foundation to start my house; to game breakers such as the whole world being permanently tilted until I located and deleted my save game, or continuing a saved game only to find that all of the items and materials I’d stored in chests or crafting stations had disappeared, Sarah has enough bugs to make me sometimes wonder why I was even trying. 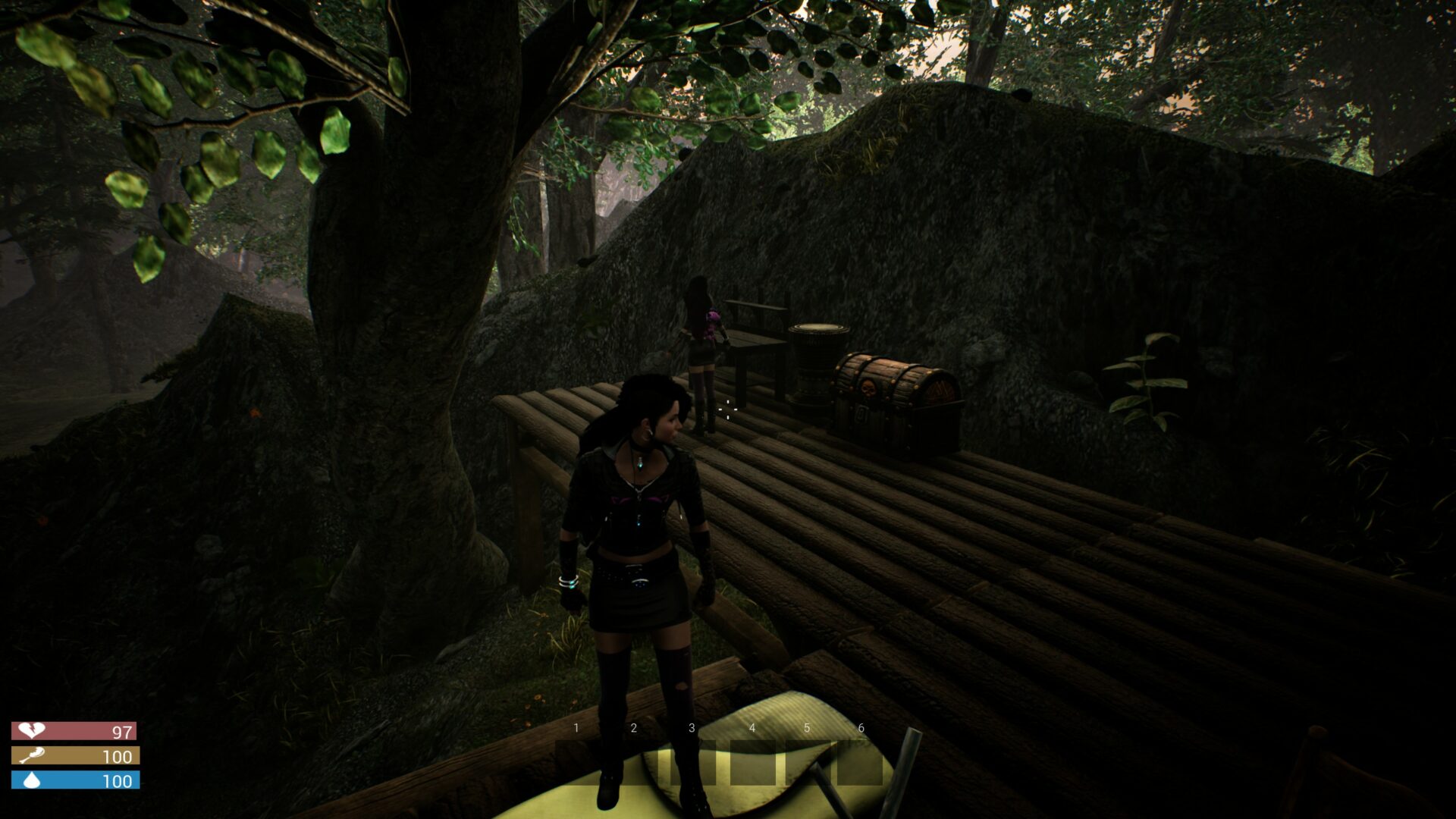 The building-placement and save-game issues need to be fixed immediately. For a survival-crafting game, it’s ridiculous that it’s so hard to find somewhere to build something, and all the time and effort lost when a saved game doesn’t load harvested or converted resources is inexcusable. These two bugs should both have been fixed before the initial release; together they make the game essentially unplayable and not really much good for anything more than a tech demo.

There are also plenty of lacking features. Graphics options are minimal; you can’t even set the resolution or window mode! There’s no key remapping. UI interactions are annoying, with escape always opening the pause menu, and never doing anything else — such as closing the pause menu again! Sarah’s involvement in the world is minimal, with no pre-emptive messages about low food or water, and no responses to combat interactions, resulting in a “You Died” popup before you even realised Sarah was at risk. It also appears that the only way to see how worn out your tools are before they break is to put them in a storage box — but make sure to take them out, otherwise they’ll be gone when your game is next reloaded! 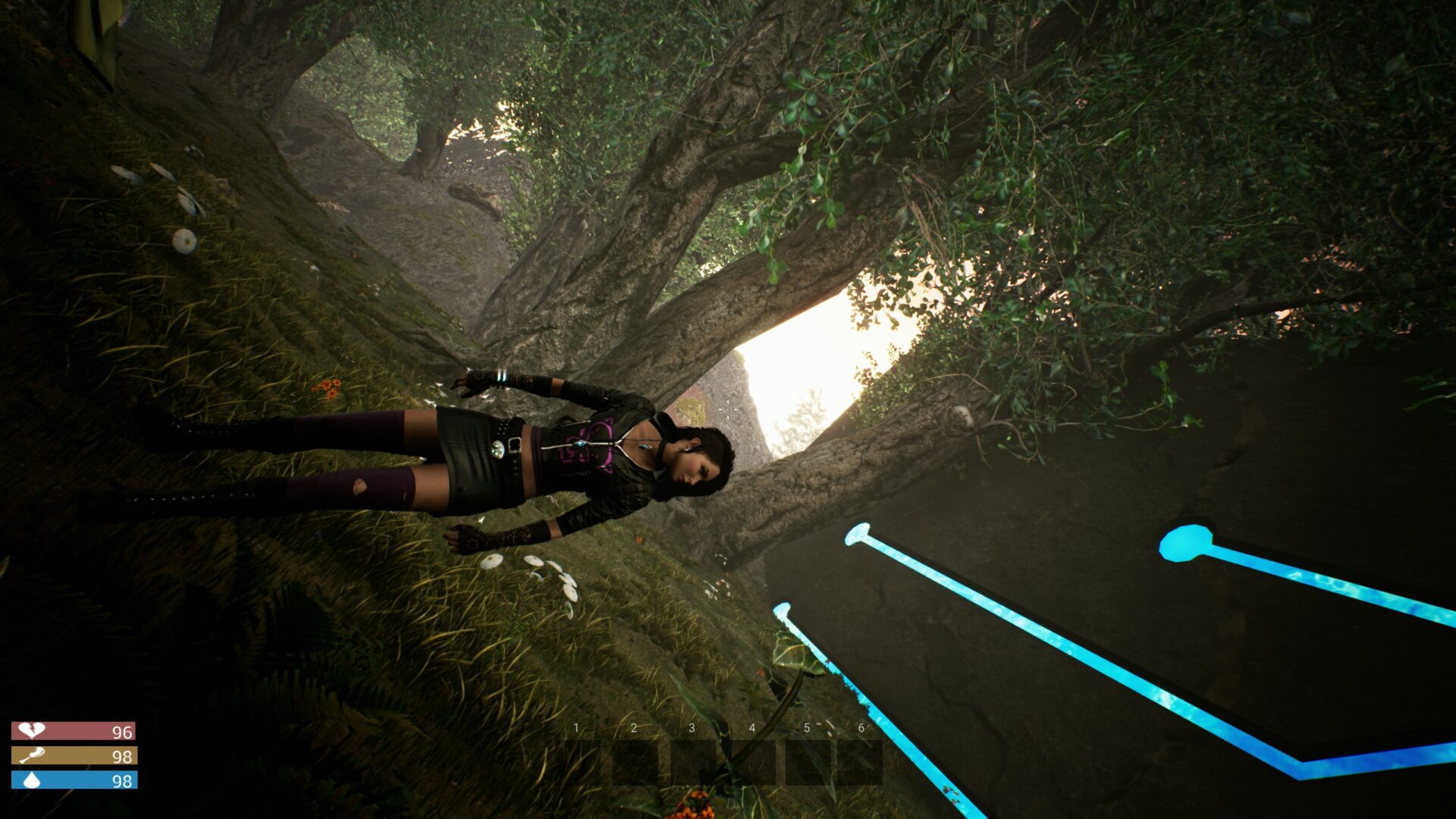 I gave it my best shot. Honestly, I did. But I haven’t played a game as frustrating as My Name is Sarah in a long time. It was all I could do to not throw my mouse across the room in a fit of rage after wasting so long trying to find somewhere I could build. The interface is hideously broken, saved games don’t work properly, and the game world is beautiful, but seems to be basically empty from what I could see without becoming stupidly lost or killed by the abysmal combat. At the moment it’s a tech demo, and sometimes feels like a barely useable one at that.

If survival-crafting games are your thing, then by all means add this to your wishlist. When it’s not moving it looks wonderful, and it definitely has potential. But I’d recommend you wait for at least a few major updates before you buy it. This one needs a LOT more time in the oven.

The developer had this to say in response to the review:

“Thank you for your objective comments. We have the finished and full version of the game. But since this game is our first experience, we plan to continue the whole development with the Users. The current version in early access is a basic version. For this reason, the opinions of the users are important to us. We will endeavor to add users’ ideas in a way that will certainly not affect the current story of the game. The main issue we care about is that although it looks like a Survival game, our plan will be to put the story in the foreground. For this reason, we avoid creating crafts that don’t work.

“In the future, we plan to add an online system by trying to add users’ opinions. Please tell us about the Game you want to see or dream about. Your ideas are very important to us! I’m sorry for my bad english :)”