PREVIEW: A Long Way Down

Fight your way through Limbo, one card at a time.

A Long Way Down is the new deck builder from new developers, Seenapsis Studio. It’s currently in Early Access on Steam.

The story is quite interesting, with you taking the role of Sam, a recently dead American waking in the dungeons of Limbo. Speaking with Sam via spirit phone (or something) is the priestess, Ma’bri (or Mabri; the game uses both), who is performing Sam’s funeral rites as we play. She guides Sam in the use of some magic spirit cards stolen from the Dungeon Master, who apparently rules over Limbo. Or something.

It’s your job to guide Sam through the game’s various levels to the end. I’ll drop a little spoiler in here: I couldn’t bring myself to finish the game, so I don’t know whether the goal is escape or eternal rest for Sam. Regardless, he gives those cards a workout along the way.

The Dungeons of Limbo

Yes, apparently Limbo is full of tile-based dungeons. Who knew!?

The tutorial guides the player through a brief introduction into the two modes of gameplay: the dungeons themselves, which are a weird sort of tile-based dungeon crawl with some very light (and extremely frustrating!) puzzle elements; and combat with weird beasties, which involves throwing cards at each other.

The dungeon parts are at first quite interesting. Each level is procedurally generated in terms of layout, world objects, and, to degree, enemy distribution, but retains primary and secondary goals, regardless. The dungeon map is made up of tiles (“slabs”) floating in the void, joined together into small discrete groups and separated by space. Sam begins most levels with a small collection of slabs, most of which he can use to plug holes in the terrain, allowing movement between the floating islands. Other slabs place traps, spawn enemies or campfires, destroy walls, and rotate slabs, allowing for a sort of light puzzle mechanic in these sections. 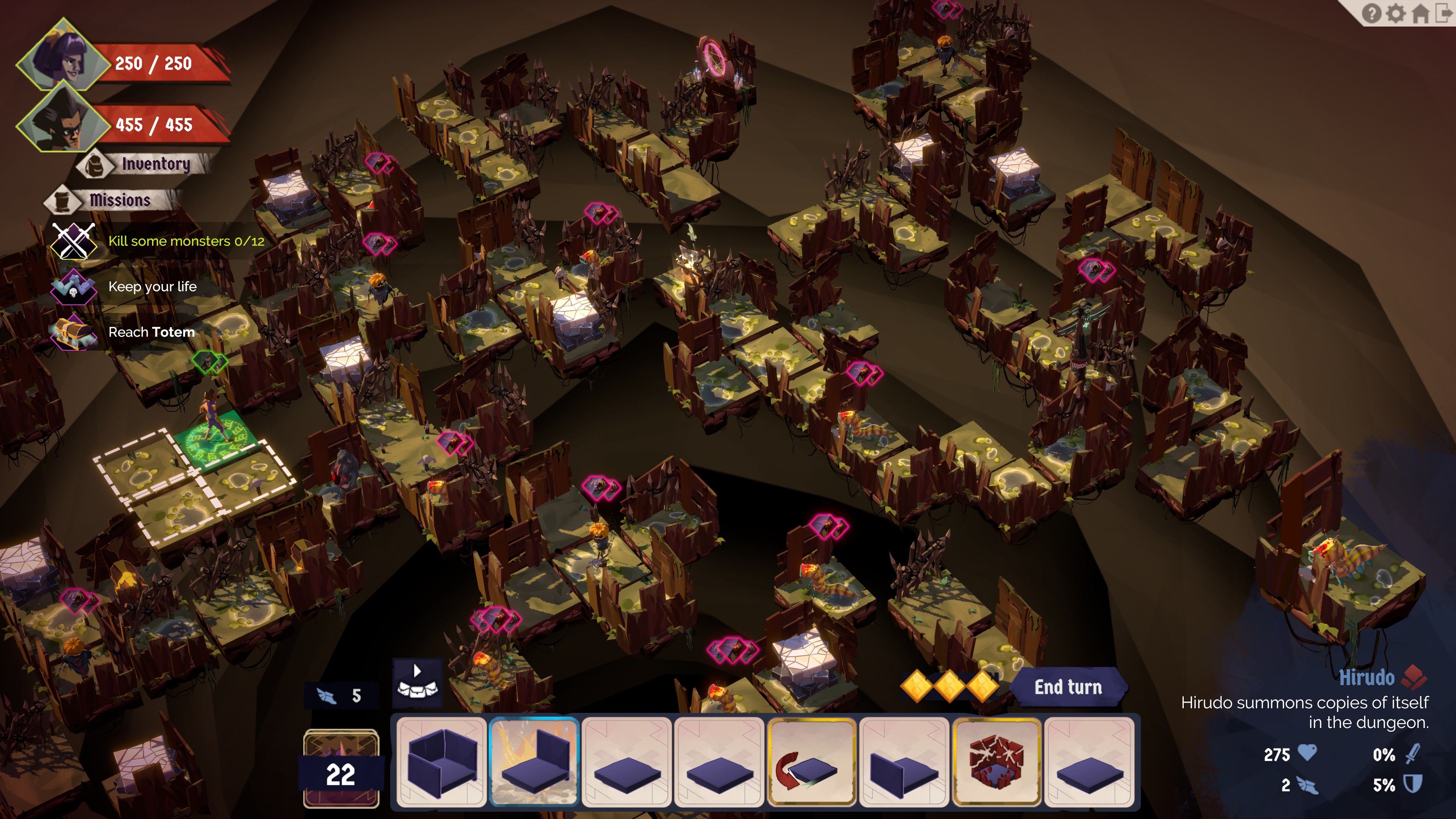 The gameplay is turn based, with Sam having four actions available before the Dungeon Master takes an action, followed by each of the enemies on the level, in turn. Sam’s actions include tile placement and movement, with movement onto an enemy-occupied tile causing a battle. Enemies are limited only to movement actions, but if they move onto Sam’s tile then they gain initiative in the combat that follows. Dungeon Master actions are frustrating: he steals one of Sam’s tiles and places it on the map, usually trying to make it easier for an enemy to get to Sam, or just to thwart Sam’s progress.

And this is where the puzzle element breaks down. Tile availability seems to be pseudo-random, determined through level generation. It’s quite possible for Sam to become stuck, unable to proceed towards the level goal, even before the Dungeon Master sticks his grubby mitts into Sam’s tile collection. Add in the loss of one tile each turn, and it becomes much more painful than it is rewarding. Early on I gave up on trying to do any secondary missions; I just couldn’t be bothered fighting the system.

Level design, then, is very limited, with vast differences in the individual level difficulty based on RNG. Enemies are at least sort of interesting, but they don’t really gel into a common theme, or at least not one that was obvious to me, anyway. There’s no consistency or common feel to them at all; you’ll fight weird blobby things, minotaur-like creatures, pumpkin-head-like things, and more. 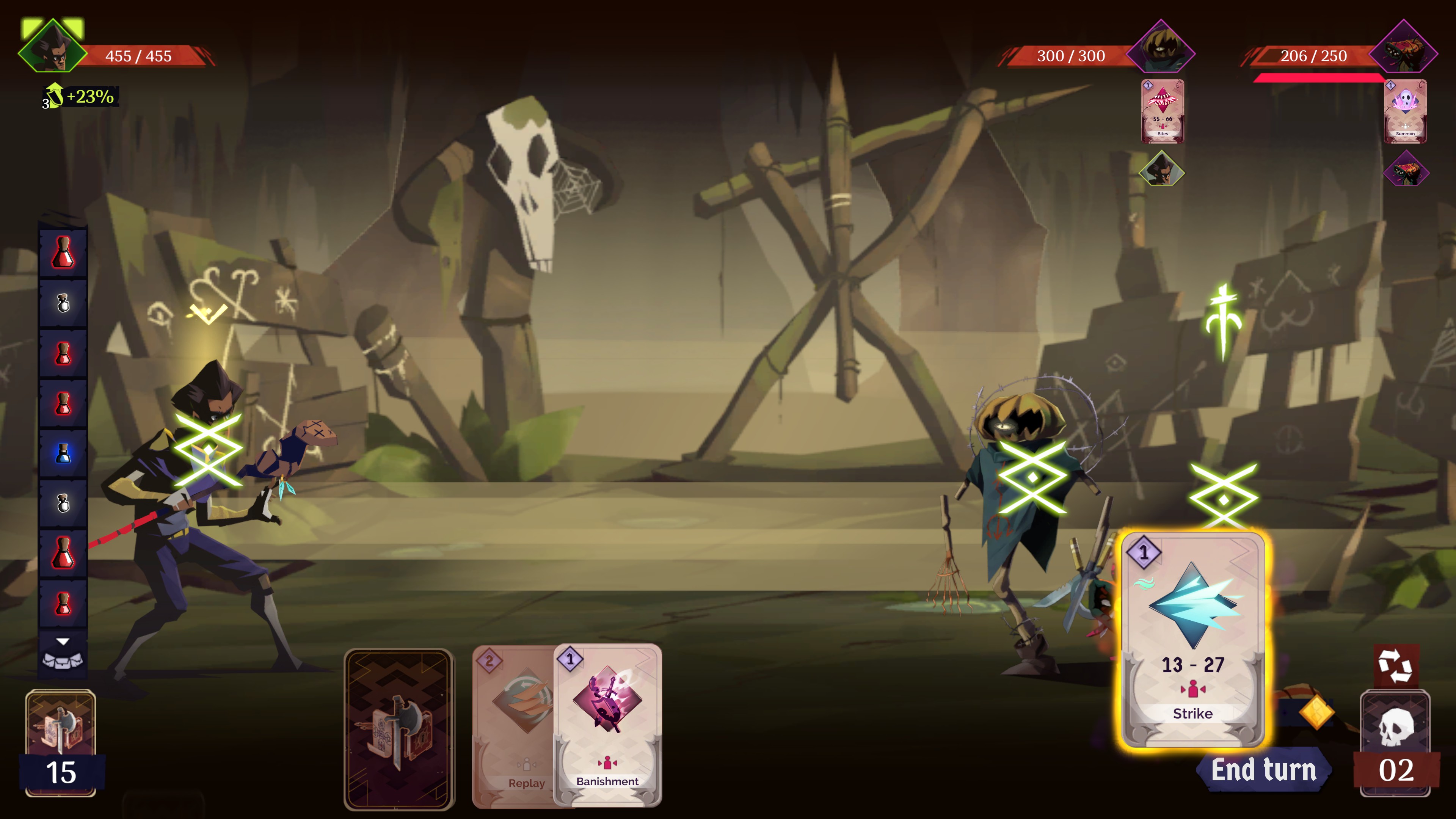 Oooh, a deck builder. That means lots of cards, right?

Um … no, not really. This is probably the game’s biggest let down for me, and it’s a double whammy.

First, there aren’t actually very many different cards to choose from. I think I read somewhere that there were 40 or so, though I’m not sure if that includes the equipment cards; I’m guessing it does. But even if that sounds like a reasonable number, they basically boil down to a few different types: deal damage, add or subtract defence or attack, and heal. The range of cards dramatically limits any tactics available, making each card-based combat feel like every other one. There’s simply nowhere near enough variety to carry the game.

Second, and compounding the first issue with the deck-builder part of the game, you’re limited to only 15 cards, plus up to four more based on equipment. Given that you have a hand of five cards, and each combat tends to devolve into a whittling competition, you’ll see almost all of your deck almost every combat. Compare this to Monster Slayers or Fate Hunters, or even Rogue Adventures on Android, and A Long Way Down’s offering feels very shallow indeed. 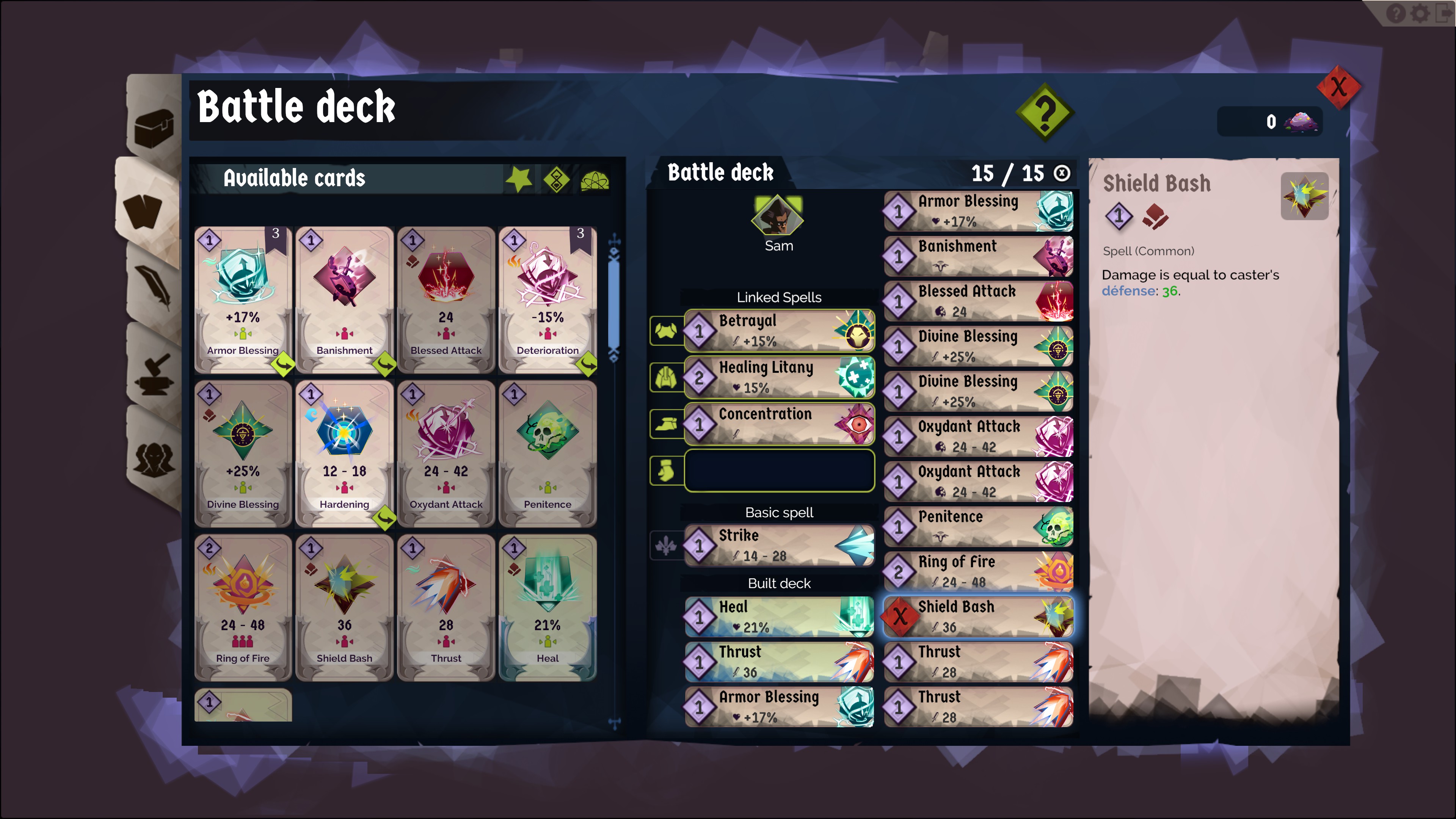 To make it worse still, progression in the form of upgrading cards — which only ever offers an incremental number update; it never evolves a card to change up the gameplay at all — is awfully slow, turning it into a rather boring grind if you actually want to end up with a deck worthy of attention.

The card battles themselves are very simple, then. Sam has three action points, each of which can be used towards casting spells or using one-shot equipment (potions, etc.). Some cards are spells that cost more than one point, and so far I haven’t encountered any zero-cost cards. Then it’s the enemies’ turn, with each enemy having a single action, which you can see in advance before it happens, in order to better plan your turn. Most buffs and debuffs last for a set number of turns; active modifiers are displayed on screen to allow you to better consider your options.

Sam can have up to two allies, each of which can change the total action points available, but they’re not considered separately for cards and action points. Instead, there’s a single action point pool available, and a single hand of five cards, and you can choose which character should take each individual action. This seems a little weird, but it doesn’t take too long to get used to. In the end you’ll probably end up using one character for almost everything, swapping to others only when they provide a bonus to a particular card or action. 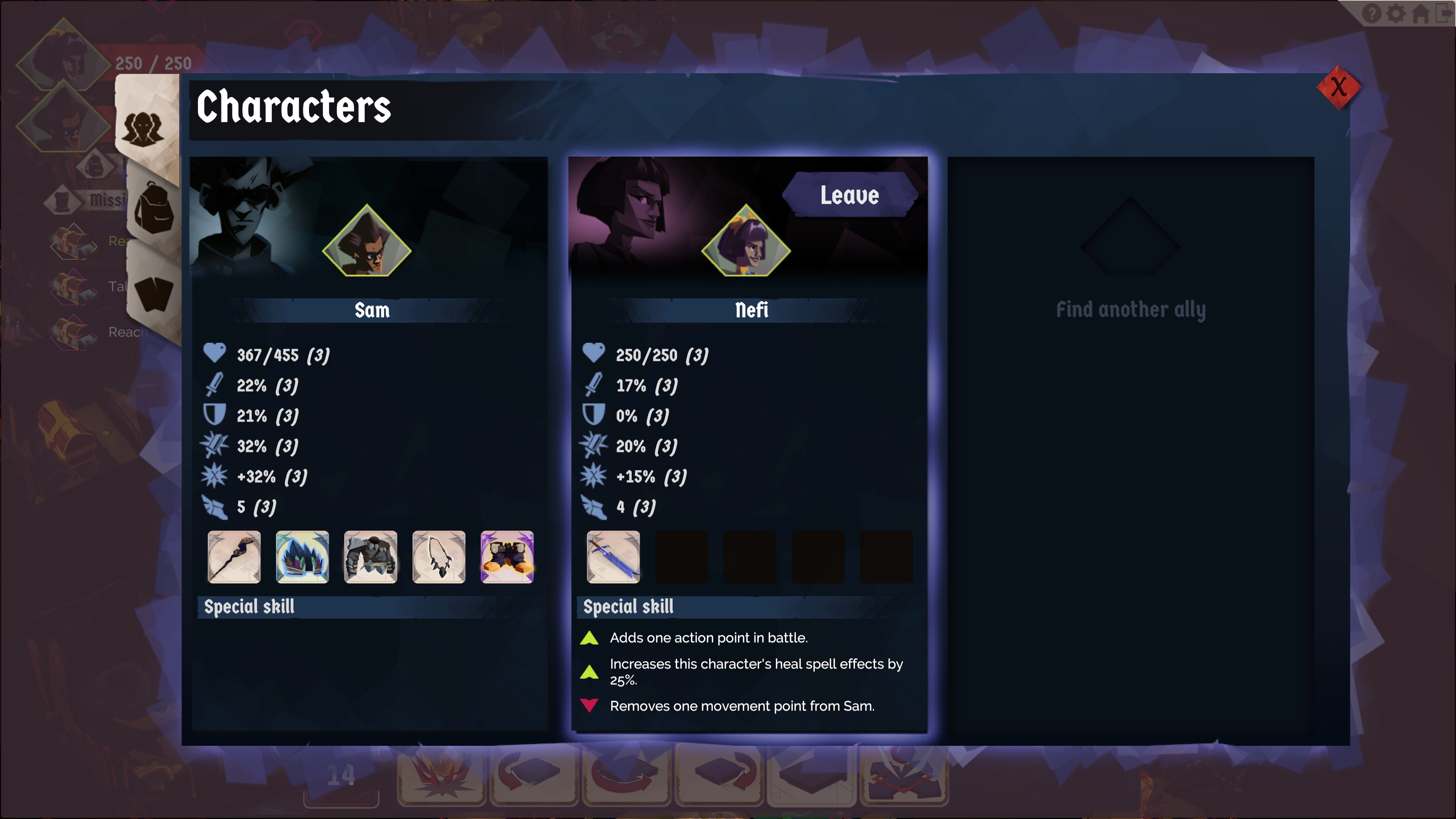 In typical deck-builder fashion, health is maintained between battles, meaning that sometimes you’re best off extending battles against easy foes while waiting for your healing cards to appear, in the hope that you can heal up before the end of each battle. This is typical of the genre, but it always annoys me a little. I mean, if I have a healing card, why can’t I just use the bloody thing when combat is finished!?

A Long Way Down has a nice, clean aesthetic, with a sort of cartoon voodoo influence permeating throughout. Levels, characters, and backgrounds look spooky in a cartoonish way, and the hand-drawn characters look really nice, in a sort of low-poly way. Enemies fall apart when defeated, giving them a weird sort of constructed appearance, which is rather cool.

The interface is big and bold, but at times it’s a bit unintuitive. Dragging cards about sometimes doesn’t work, and I’ve found myself clicking on things over and over again and wondering why they’re not doing what I expect. Tooltips are limited and look like placeholders, too, with text that’s barely noticeable in some instances. The tutorial and script have some typos and other grammatical errors, too. Strangely, the numbers on the cards don’t always seem to be correct; I’ve hit enemies with no defensive modifiers and done damage that should be impossible based on the text displayed on the card at the time. Oh, and some mission text doesn’t make sense. For example, what does “Keep your life” mean? It seems to fail randomly. 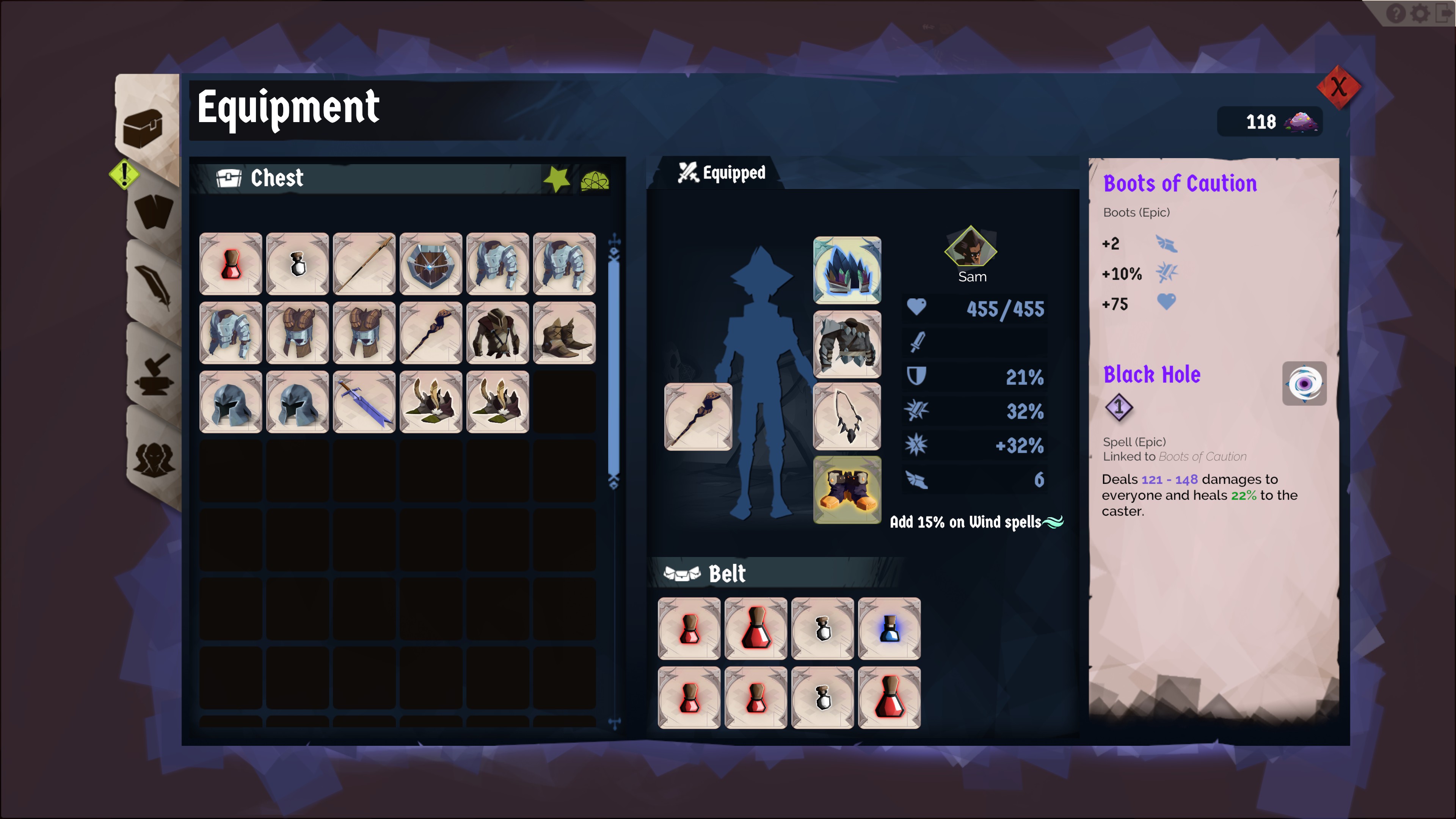 Sound effects are well normalised, but don’t quite fit at times. For example, why do my characters all sound exactly the same when they’re hit by enemies, and why do all of my spell effects sound the same? Music is pretty good, though a little bit too heavy and “rocky” for me at times, and rather loud on the title screen. Parts of it remind me of Gabriel Knight: Sins of the Fathers (the first game), which is a good thing.

The Steam store page claims A Long Way Down is “a deck-building roguelite RPG”, but the RPG aspects are very minimal. There is long-term progression in the form of card and equipment upgrades — both made by collecting “dust” from statues and chests pseudo-randomly placed throughout the levels and from combat — but there are no skills, abilities, levels, or other RPG-like components beyond the cards and equipment, and no character progression at all.

While the game is based on procedural generation of levels, there are some limits to this, such as the pre-defined quests for each level. Death involves only the loss of any cards or items earned on the current level — i.e. what’s stored in Sam’s bag at the time of death — and can even be quite rewarding, with Sam receiving an amount of upgrade dust and respawning back at the base level.

Of each level’s goals, only the primary goal need be completed to advance. Secondary goals award bonuses in terms of cards, equipment, or dust, but given the frustrations of dealing with the tiles, I generally found myself not bothering to complete them. This was compounded by the lack of any mid-game save ability; the game can only be saved at Sam’s base level, making the game impossible to play in short bursts. 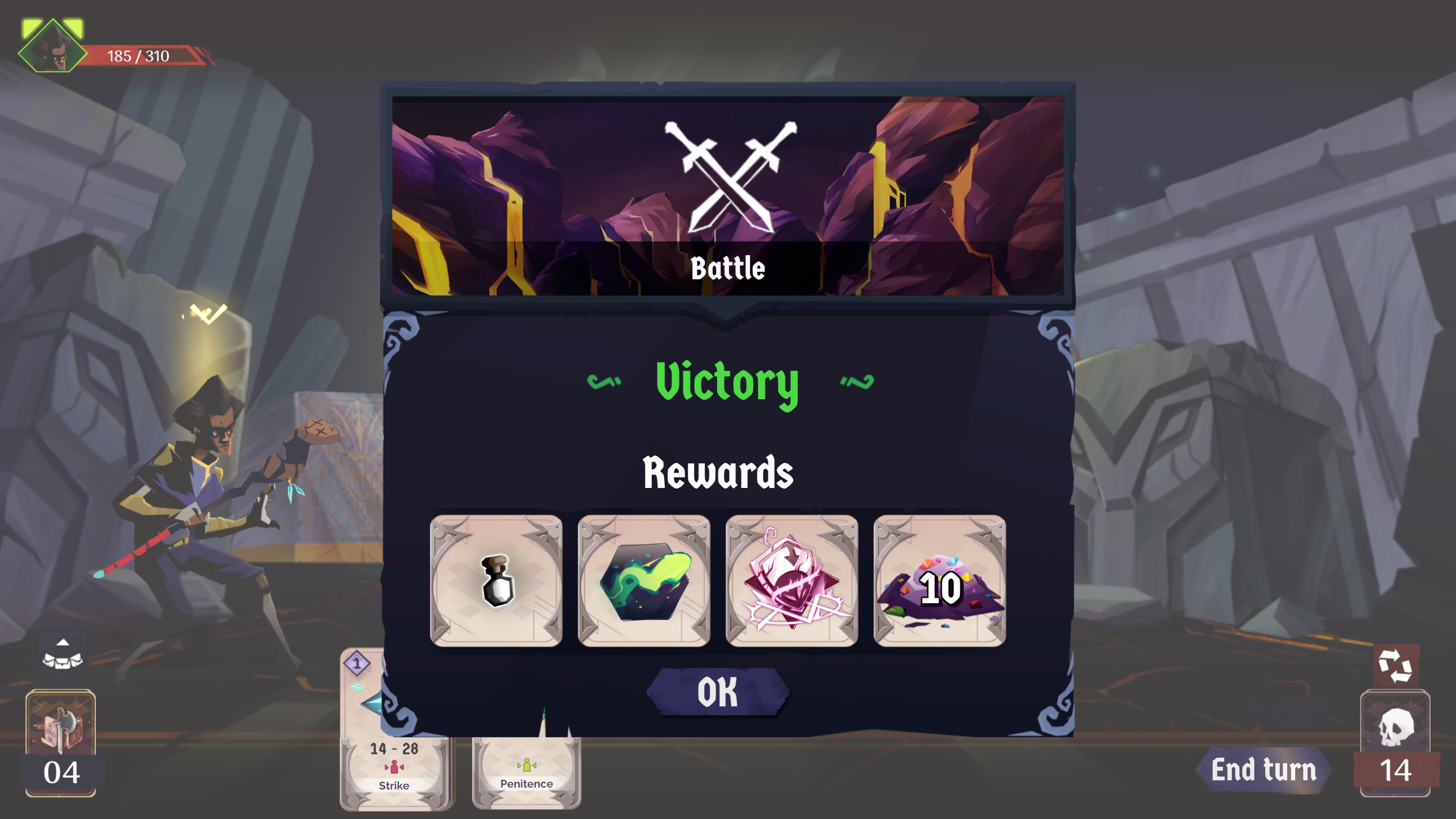 A Long Way Down seems to be confused as to what it wants to be. It doesn’t have enough different cards, or enough deck space, to be a deck builder; progression is too limited, slow, and lackadaisical to be a role-playing game; and the pseudo-random tile collection and Dungeon Master interference with tile placement ruin any claim it might have to being a puzzle game. What we’re left with is this weird mish-mash of features that don’t really gel, making the game frustrating and cumbersome to play.

More cards and increased enemy and ability variation will go some way towards providing more interesting opportunities, but ultimately the core gameplay needs to change before it would be something I can imagine spending much more time playing. I’d rather just go and play Monster Slayers again.