A massively overpriced attempt at a quite promising roguelite.

Despite my firm dislike for the game’s name, “Don’t Die, Minerva!” is a really promising roguelite, something I did not expect from Xaviant. The developers had a rocky life these past few years but this game shows enough promise, commitment and ideas to be worth a check every now and then to follow the early access progress. However, it’s not worth buying YET as it’s massively (and disappointingly) repetitive and overpriced for the overall content presented. A solid and stable first release is a great start, now it’s a matter of adding alot more to this title.

You don’t need it in a roguelite/roguelike… at all. Binding of Isaac did it masterfully but many rarely even attempt it. Don’t die, Minerva! just cryptically tries to justify the gameplay aspects and it comes off as weird, unnecessary and horrible.

You are Minerva, a little girl who loses her parents and enters a mansion in search for them, upon meeting the butler she’s informed the mansion is haunted, there are essence crystals that are really cool and she should farm them to get stronger and that it’s really interesting that she can come back to life upon death.

Are you reading this as jarringly as I wrote it?

Maybe I’m taking this a bit too seriously but the writing is seriously bad and the game simply didn’t need half of it and it hurts the first runs because you’re in these mini-cutscenes that you just don’t care about at all.

Both it’s strongest and weakest element. I like how Minerva owns a flashlight, which is used to kill the ghosts and monsters roaming each level. You aim and they will take damage over time until death, similar to Alan Wake (except the flashlight here is the only weapon needed). The flashlight can drop as loot in higher level variants, with different stats (though most are the same boring percentage based stuff such as more critical damage/chance, more range, etc.) and even with different forms of attack! Some are a beam, others shoot balls of light, others shoot something resembling the lightning gun from Quake – it’s great to see how each flashlight plays and has its role in the combat and since you can only use one, using the one that suits your playstyle the best is a good idea. 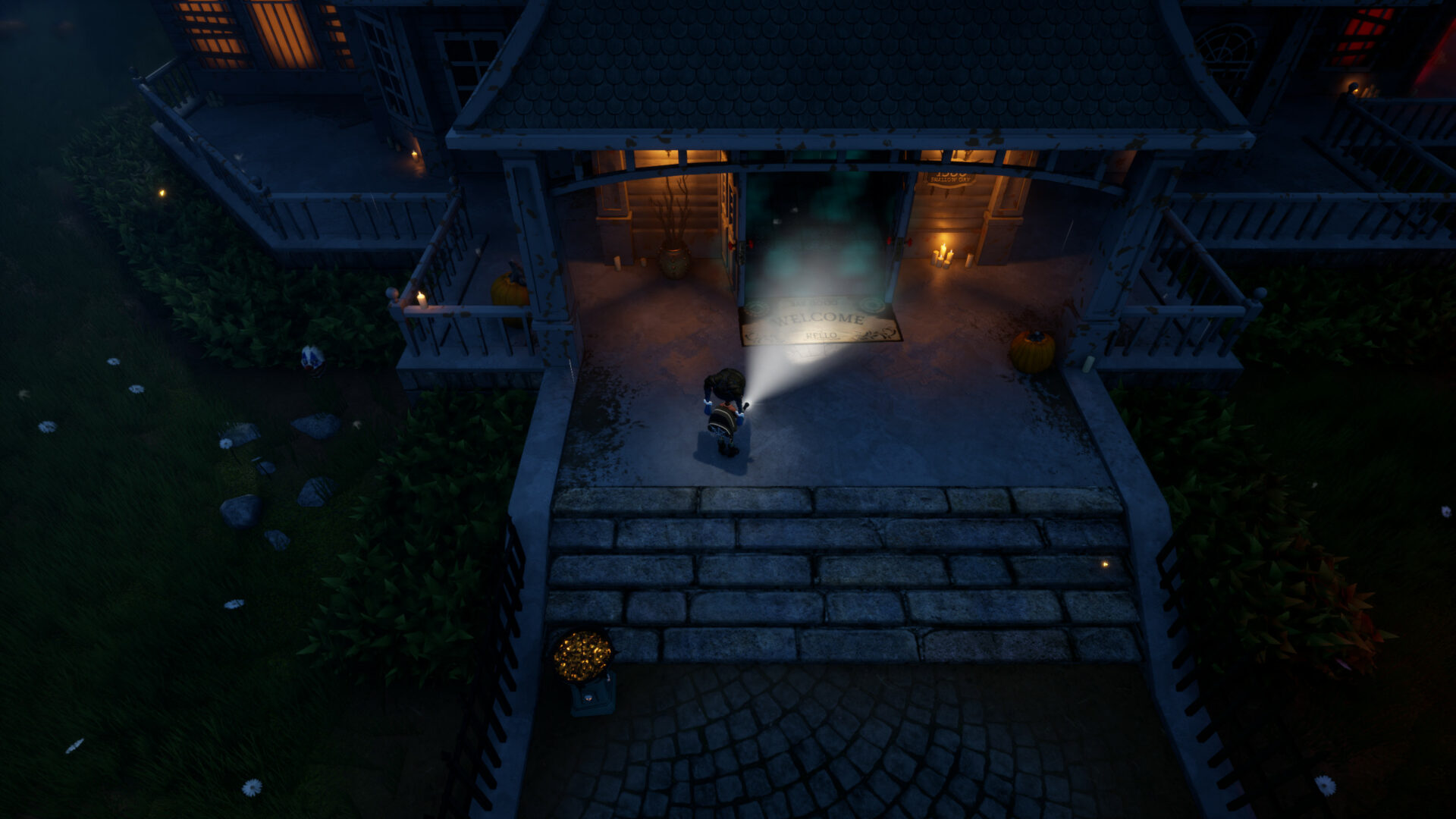 The game has loot drops beyond flashlights, as trinkets and gear are present: from your backpack and shoes to necklaces and jewelry to enrich and charge weapons and abilities with a certain elemental type. Abilities are basically a secondary fire mode where you deploy animals (yes, animals) that help you in combat – from the starting level 1 monkey which stays still and shoots bananas at enemies, to the absolutely broken and overpowered cat which hilariously headbutts enemies until they die (I barely had to shoot the whole time, the cat would just tear everything apart in seconds!!). Loot also includes energy refills (which you spend by activating animals, using the flashlight or dodging), health refills, money (to spend on the shop for better items) and essence, which are these crystals you really should look for in order to spend in the upgrades given by the butler (and other characters you’ll meet as you progress) – these upgrades are permanent, even after death and include some useful passive abilities such as recycling unwanted items into money or refilling health in certain midgame stages.

I like how the game manages to fit all these items into Minerva’s overall theme, backpacks and such are cute and she can spawn cute animals to help her out, it’s a fitting theme and the Unreal Engine is decently used here to convey a good environment to traverse. It’s also great that items change Minerva’s appearance, adding some attention to detail that I didn’t expect (another great detail is the footsteps Minerva leaves if she steps on any ghostly goo when you kill them).

There are a few issues overall that REALLY hurt the game. Firstly, the levels are too repetitive despite having their own themes. Until the first boss at about floor 4, you’ll be looking at the exact same tiled floor mansion rooms with tables and pumpkins, the only thing that changes is the item order and room size; this first stage can last about 20 minutes so it can get repetitive until you reach the gardens and have to do it all again. Level layouts for each floor are decently arranged and fun to explore but since they all look the same, you get sick of it way too quickly. Binding of Isaac is the main competitor of this game, in my opinion and it does absolutely everything better at a cheaper price. Don’t Die, Minerva! desperately needs more level layouts, themes and variety to keep the play interested as stage themes are repeated for as long as it can take you to beat Mom’s Heart (the original ending) in The Binding of Isaac (provided you don’t do Delirium or any of the secret/endgame bosses).

Secondly, the combat is weak and the tutorial is somewhere between non-existent and garbage. About the combat, while all these possibilities with the animals (each have their own attacks and trinkets can modify their elemental damage) and the flashlight types, the combination amounts are still minimal at best and since you can carry only 1 animal and 1 flashlight at any time, it becomes a matter of playing and finding your favorites/best items and stick with them in all future playthroughs. Repetition starts kicking in the further you go as I found my animal to just obliterate everything with relative ease and since you can deploy one basically as soon as the previous dies (you can do this infinitely), you barely have to bother with your flashlight as at a certain point the enemies just sponge the flashlight damage that it’s not worth breaking your mouse spamming it when your pet deals easily 200% more damage than you ever will. Sometimes I even had my pet kill enemies so small or poorly designed that they blended way too well to the background and the mess going around Minerva, some better enemy highlighting would also be appreciated. 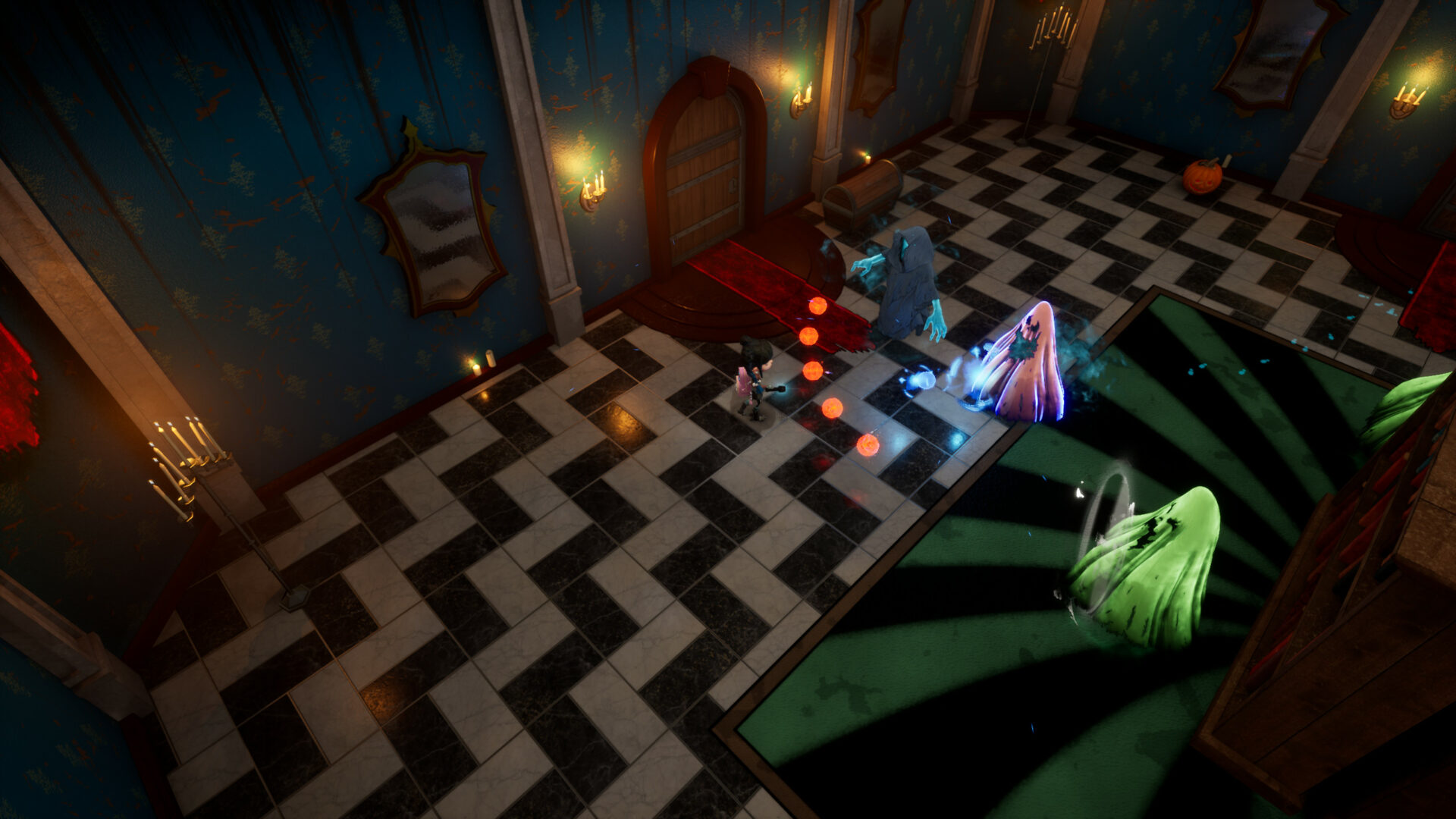 The tutorial is also lackluster and has poor recommendations. The butler will scream out of his ghostly lungs to “DODGE IS AMAZING, USE DODGE, HAVE I TOLD YOU TO USE DODGE YET?” without ever mentioning that early game dodging is a bad idea as not only are the first floors easy enough without it, but also dodging consumes energy, which is tied to your flashlight and pet deployment ammo… so spamming the dodge button as the butler absolutely begs you to do, is the worst idea possible until you realize that you can’t turn the flashlight on and you can’t deploy your pet until you run around in circles dodging every single projectile and berserk enemy until you deploy a pet to kill everything and pick up the dropped energy vials, should you be lucky (they are quite frankly though I did find myself running out of energy once or twice as I wasn’t aware of the obscene energy consumption of the dodge mechanic – and it is not even that good).

Also worth noting that the controls are presented in every single loading screen when transitioning levels or starting a new game which is very frequent. While I appreciate being reminded about the controls since this game uses a shockingly high number of… about 8 prompts – WASD plus F to interact, 1 to deploy the pet and the 2 mouse buttons, the fact that I am presented with the controls in an XBOX controller type layout is the oddest factor here…

I swear, I looked at my hands and I was playing on my keyboard and mouse and yet, I was being told to use the right stick to aim the flashlight which was seriously confusing…

Okay, in all seriousness, controller layouts in a PC game without even asking the user’s input type is borderline amateurish.

A final complaint is about the aiming, the game has no crosshair or anything for the aim, so projectile based flashlights are more difficult to use as the mouse cursor blends too well in the background and hurts a bit the overall accuracy of the player in my opinion.

Overall, better randomness algorithm and more variety in level design, layout and aesthetic/theme, more pets, weapons and combinations (even a few synergies that make some item combos extremely powerful) are needed and a fix to the controller layout loading screen would be much appreciated to PC users.

As mentioned, the Unreal Engine is actually well used here… the overall aesthetic and art style of the game is quite charming and the graphics are quite nice, with some good physics and particle effects when destroying objects. The performance is mediocre, sadly as I had to knock it all down to Low for a consistent 60FPS gameplay experience, which is odd since my GTX 1060 should be running this with flying colours and it does not…

The options menu is also lacking a bit and should have a couple options added, however I do admit textures, shadows, V-Sync and basic options of the sort are present and are configurable enough to allow you to tweak the game at your own preference (or your PC’s limit).

As far as audio is concerned, there’s no voice acting and the sound effects for the combat are mediocre and underwhelming at best, sadly reducing even further the overall feel and satisfaction of the combat (which isn’t helped when your pet does all the work for you). Despite this, the music is quite solid and the OST is quite worth a buy, should you ever get this game and enjoy it.

Don’t Die, Minerva! has the potential (and a lot of it!) to be a good choice among the plethora of existing roguelike/roguelite titles around. However, at the 17€ price tag, I can just recommend a dozen other games far better than this, with more content and better combat.

That being said, this is early access! A comparison isn’t really fair so I ultimately recommend you follow the game, keep an eye on updates and what gets added/fixed, on release with quite some content and improvements for the issues I mentioned, this game can be quite a nice indie gem worth everyone’s money. For now, sadly, just buy The Binding of Isaac.