This science-fiction survival-crafting bun needs a lot more time in the oven before it’s suitable for human consumption.

Stars End drops its players into recently thawed new arrivals to the troubled Stars End frontier system, where the remains of earlier human colonisation efforts have fallen into disrepair and ruin after system-wide political issues and rebellion.

As one such newly awakened colonist from Earth, your job is to harvest, craft, and build lots of stuff, taking part in the restoration of the rather neglected colony.

Stars End has only recently released into Early Access, and the developers make it clear that they know it’s still very early days. One of the information screens in-game states that the small development team estimates that it will be two years until the game leaves EA; I think that’s pretty optimistic. 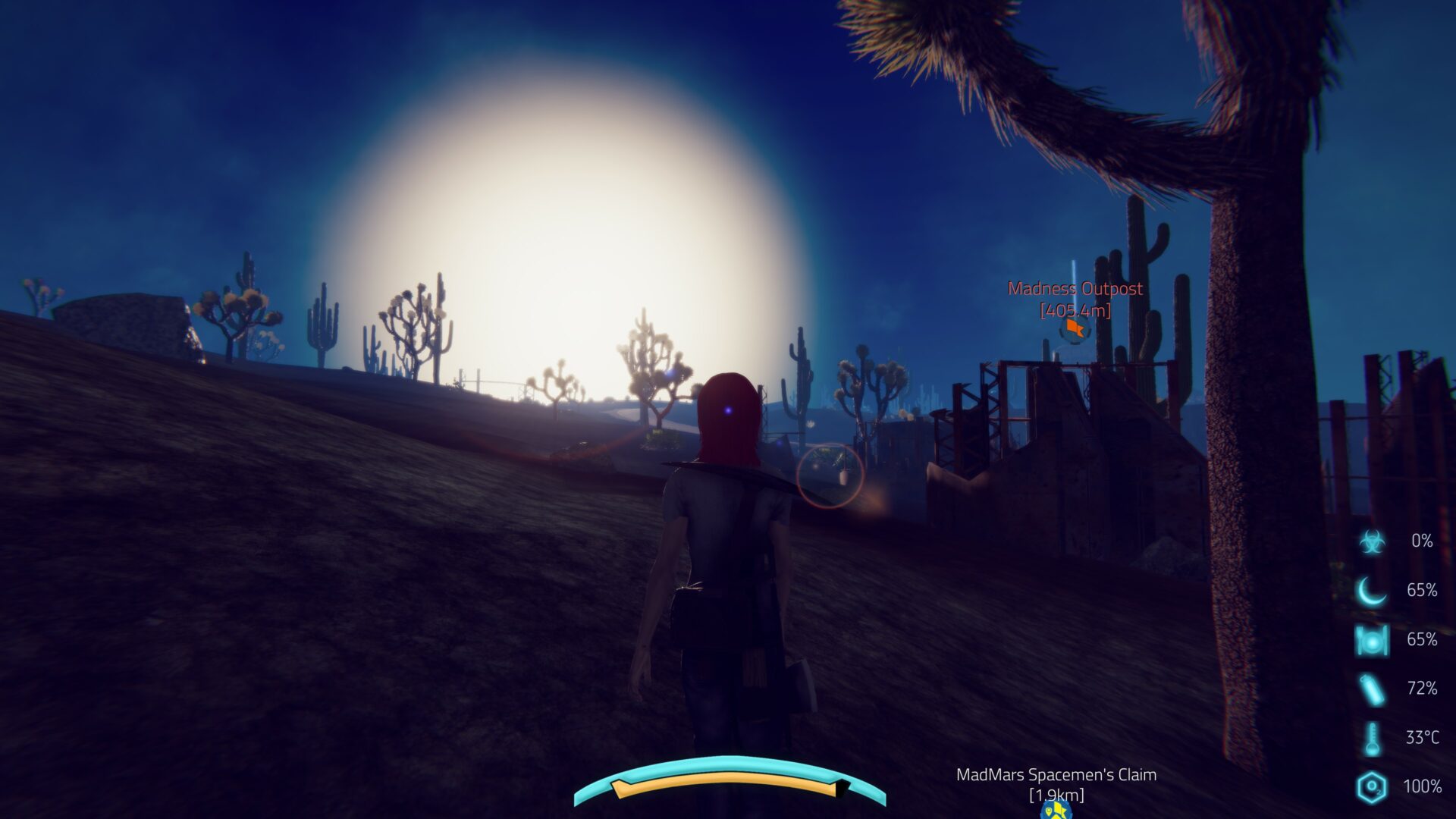 I’ve kept this in mind while writing this review, but as with any game I can only review what’s currently available. It’s promising when a game’s developers provide a plan for progress during EA, of course, but it would be remiss of me to treat such a plan as inevitable.

In the case of Stars End, the very early stage of development is obvious everywhere. The game is currently very limited in gameplay and scope and full of place-holder assets, suffers from severe performance issues, and is drowning in bugs, from small annoyances to game-breakers. It’s a very early slice of the game, with basically all of its components feeling like barely functional prototypes. But it does give a reasonable indication of what it might possibly be like when it is finished, and that’s a grand vision. 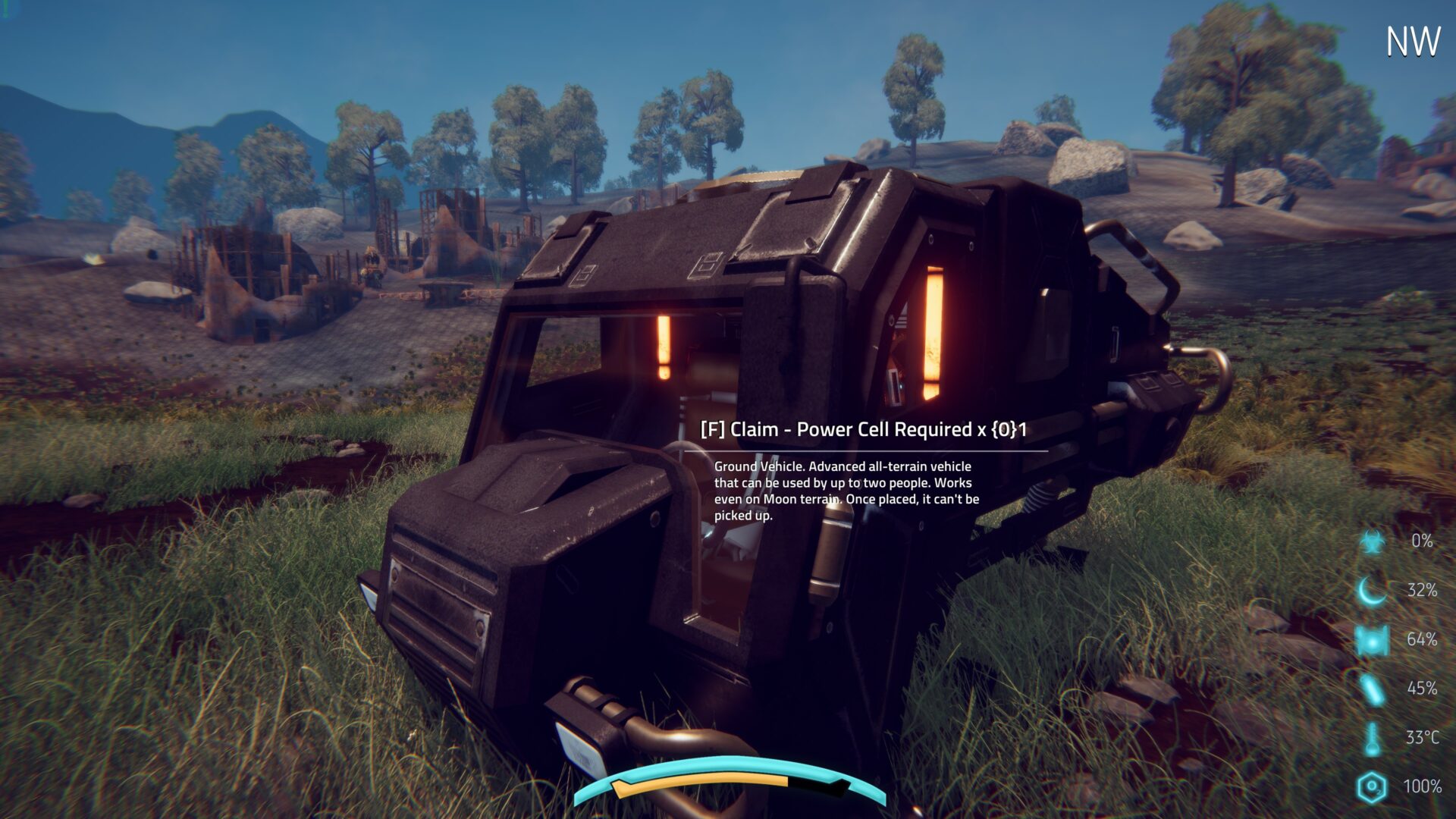 The basic gameplay loop should be familiar to anyone who’s played any of the many other survival-crafting games available for PC: keep yourself fed and watered while you scavenge for basic resources — in this case plant fibers, wooden sticks, and scrap metal left behind by the previous wave of colonists — craft tools and items to make your survival and scavenging easier, and refine your materials into higher-tier resources, to make still more useful items.

Of course, Stars End adds its own particular flavor to this familiar gameplay. The slightly wonky tutorial tells you that ownership means nothing in Stars End, so you’re encouraged to loot everything you see. In my own play through the tutorial this left me far better equipped after an hour than five times that long spent in the game proper. In fact, looting gives you countless high-tier items that would take many hours of normal harvesting and crafting play, such that it makes the core gameplay loop largely redundant. 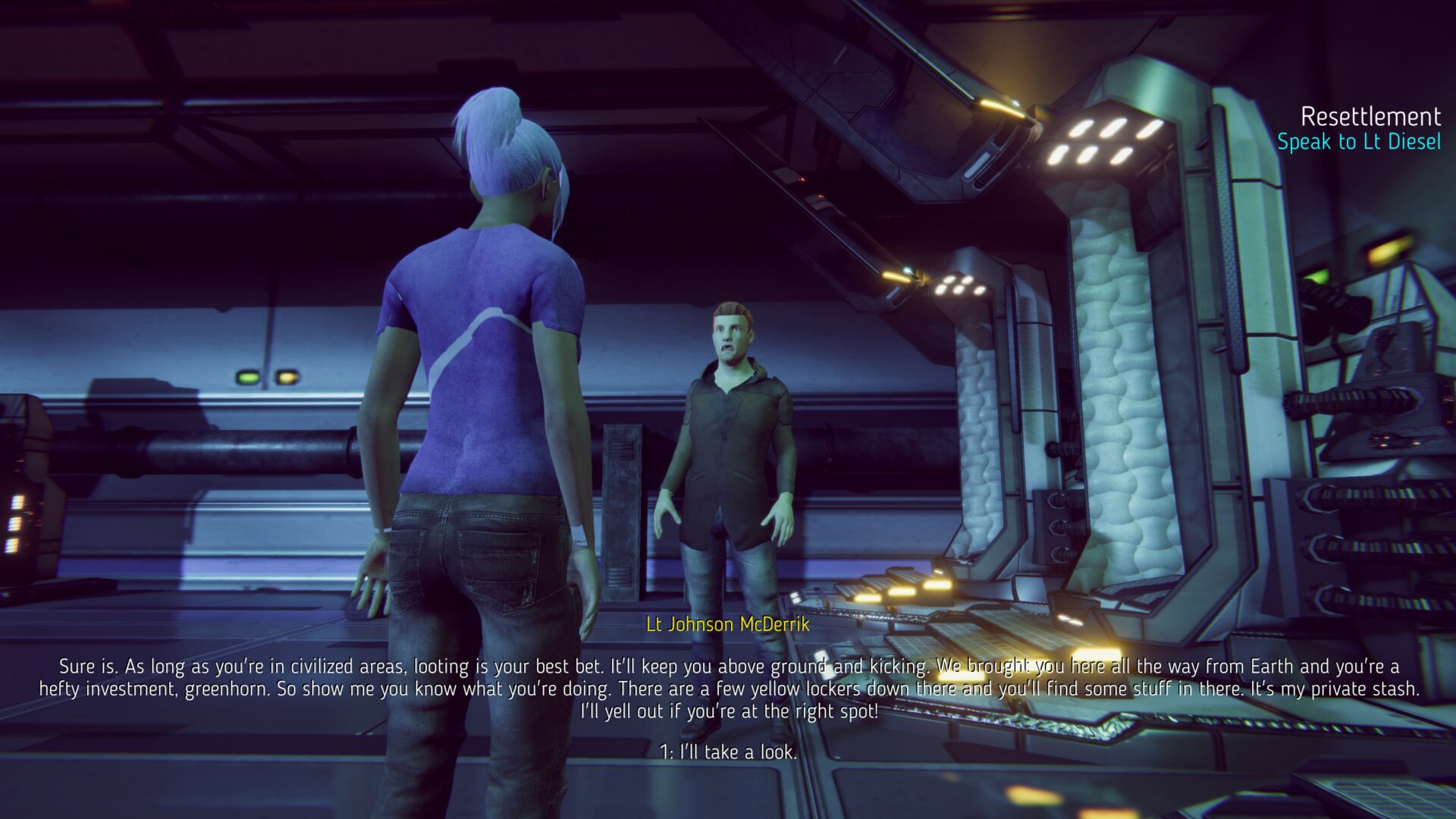 The resource grind is expected to a degree in this sort of game, but in Stars End it seems tediously slow and basically pointless. It seems to take anywhere between five and 20 or so swings of a pickaxe to harvest any given resource node, with each swing being slowly animated and producing at best one of a particular material. If you can develop far enough into the game you can get a grazer, which speeds up harvesting, but I couldn’t make myself play the current iteration of the game for long enough to get to that stage.

By-hand harvesting, looting, and crafting are excruciating, with each interaction with the game world popping up a little countdown of seconds until the action is complete: starting at a couple of seconds for looting or harvesting a bush, or ten times that for more complex crafting. There’s no crafting queue or ‘craft all’ feature either, so you have to click and wait once per item crafted. You can also build some basic structures, but the placement of base items and structures is somewhat unreliable at the moment. 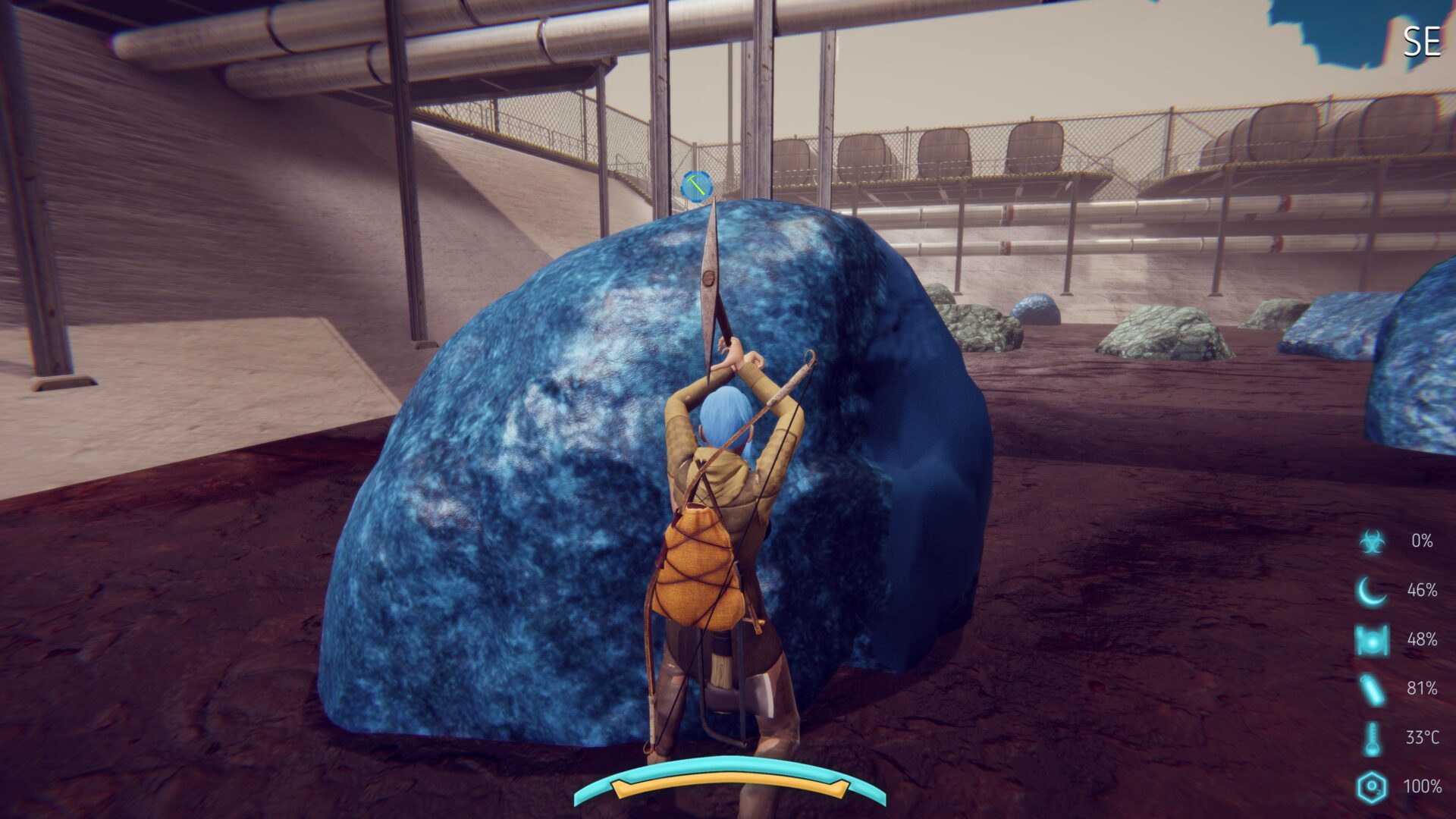 All of this wasted time would be potentially bearable if it led somewhere, but in the game’s current state, at least, it’s ultimately crafting for crafting’s sake. There’s actually no game here beyond the crafting; there’s simply no point to it.

Of course, most games in this genre include some sort of conflict as well as simple survival, and Stars End is no different in this regard. From the get-go it has both single-player and multi-player PvE game modes, as well as multi-player PvP, in which you have to avoid both the always-aggressive non-human creatures that inhabit the planets and other players. 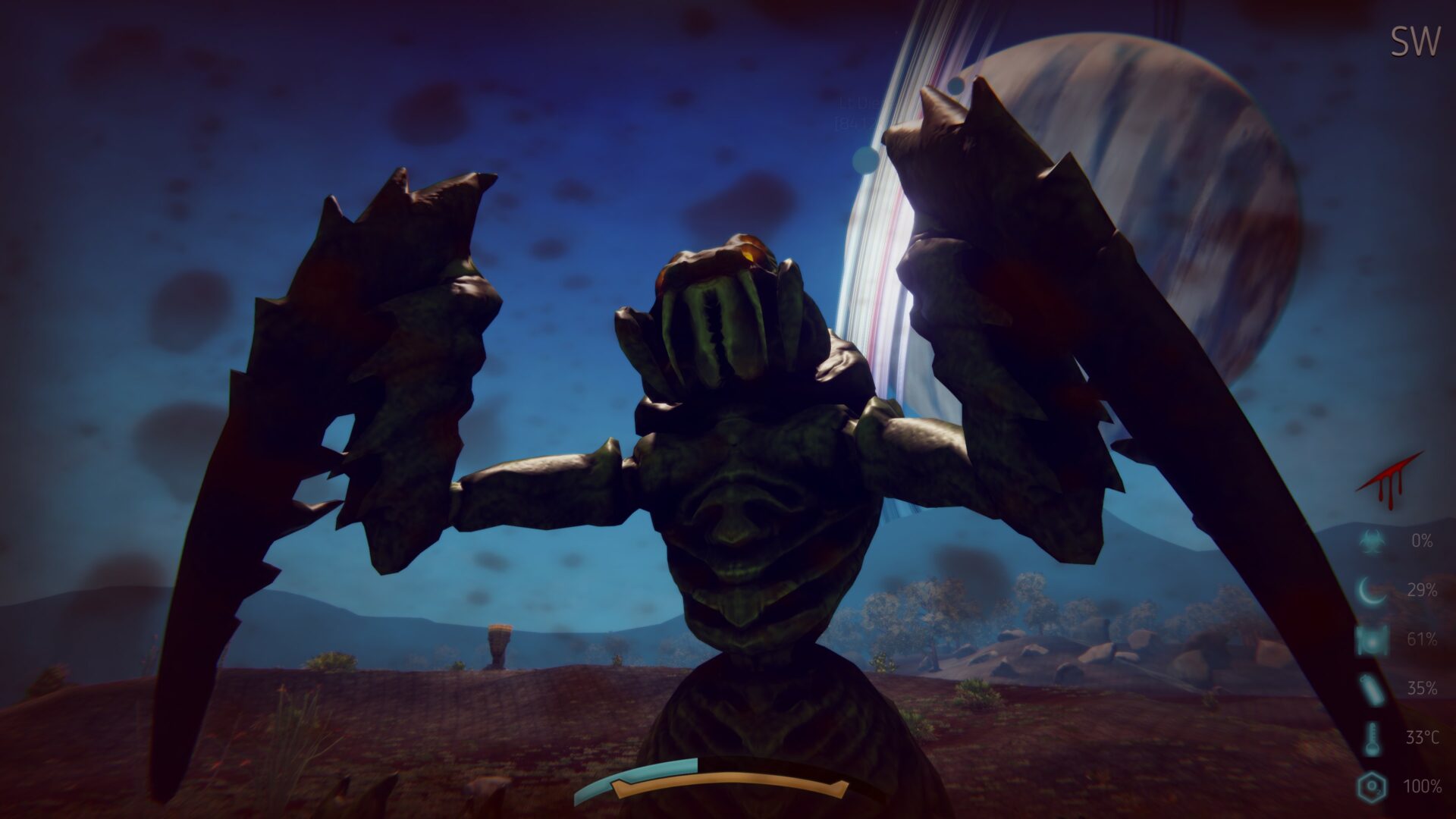 In my time playing the game I’ve only encountered one enemy type: a truck-sized insectoid. I believe there’s also supposed to be a second creature type — a sort of terrestrial-style bear creature — but even though I flew across half the starting planet of Beta Prairie and landed half a dozen times to explore, I never found one of these. Perhaps they’re only on the other planets.

Encountering enemies invariably leads to combat, which is dull and unfulfilling. Creatures run straight at you and try to hit you, causing bleeding with each hit, making it seemingly impossible to engage in melee combat unscathed. Doing the tutorial leaves you with a shotgun and some ammunition, however, and a bow and arrows are easy to make, though very slow to stock up on arrows, due to the harvesting rates.

The game is also home to NPC humans of the new and old colonizing forces, but apart from populating the few trade shops scattered about the stations and planets, all they do is respond with a randomly selected speech from what seems to be a very small number of scripted conversation pieces, some of which will give you a free item. 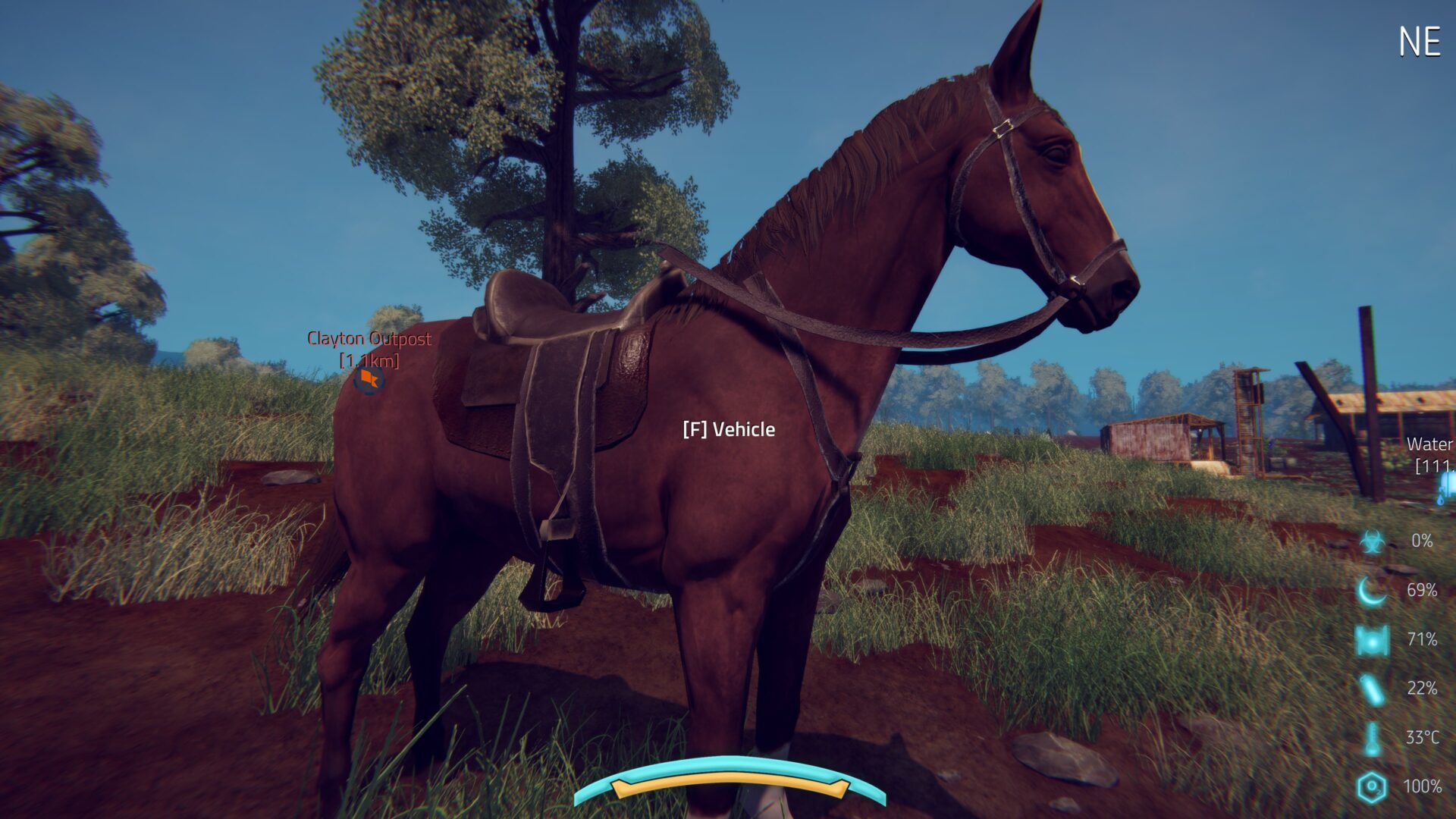 Overall, Stars End looks pretty terrible, with foliage and some few special effects being the exceptions. The game consists mainly of a small collection of very basic, repeated models, with bland and ugly textures. The developers have already stated that they intend to improve graphics significantly, but at the time of review, even though there are some wonderful opportunities for impressive multi-planet and moon vistas, they’re just not realised yet. This isn’t (yet) a game you’d want to use for desktop wallpapers.

The character models aren’t too bad, but with only limited customization choices and a number of glitches — missing polygons; flickering, moving, or disappearing hair; wonky animations; etc. — the player characters are perhaps the best of a bad bunch. The lack of full rotate and limited zoom on the third-person camera make this worse, as do the various bugs that relate to the third-person camera, such as interactions not working, automatic camera changes, and the like. 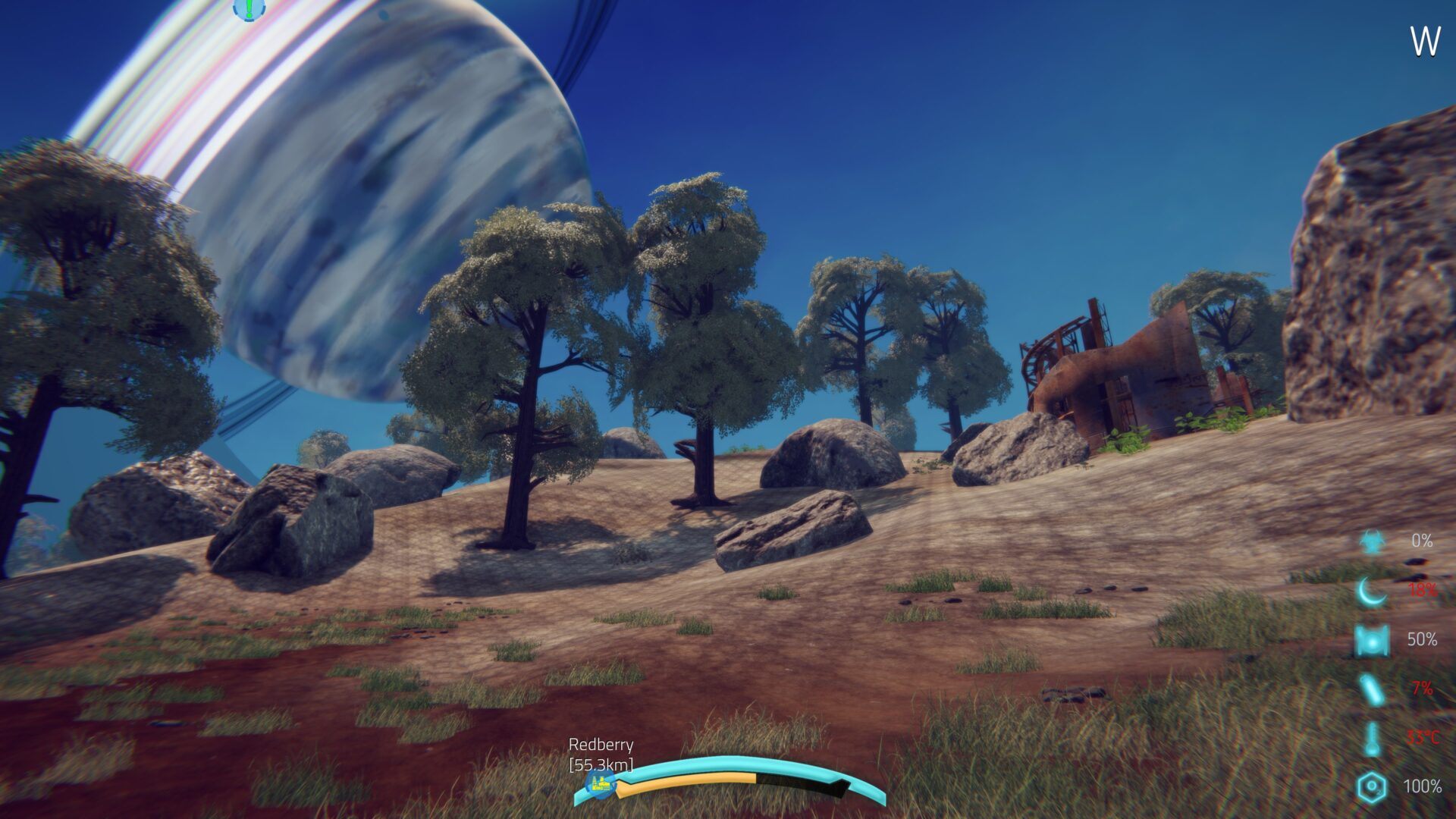 Performance is also awful, with huge spikes and freezes, sometimes up to a few seconds long, and what seems to be some sort of input queue feature that replays your movements when the freeze finishes — usually sending you plummeting to the ground upside-down, or otherwise completely disoriented, when it happens while you’re in a ship. Smaller hitches and stuttering are also common, and seem to be related to resource streaming or loading. Pop-in is obvious and vicious and distance fog looks extremely artificial. Load times are very long: minutes in some cases.

Sound-wise, the game features some distorted and mostly inappropriate sound effects and a couple of music tracks, which are actually quite nice. There’s a little bit of speech included, which is extremely variable. I quite liked the opening narration, at least.

The many, many bugs are mostly bearable, but there are a couple of game-breakers. The one that made me put the game down for the moment was a save/load issue, whereby I’d saved the game while flying above a planet and reloading caused me to plummet from the sky, through the landscape, destroying my vehicle and somehow respawning me standing underneath it, over 50 km from my base and any refinery that I could find.

Other major annoyances are inventory stacking issues, clipping and geometry sticking issues, the performance spikes and freezes, and perhaps most importantly, the simple lack of enjoyable progression. There are no RPG elements or anything like that; progress is measured only in what you have harvested or crafted, and with no real goal yet other than to make your own ship, it all feels rather pointless.

Minor annoyances are too numerous to list completely, but some notable issues include distance measurements that are way off, a too-simple trading interface, some unpredictable physics, floating objects, disappearing resources and negative material counts, and various scripting and other issues where the game gets stuck in one mode or another, typically requiring a save and reload. 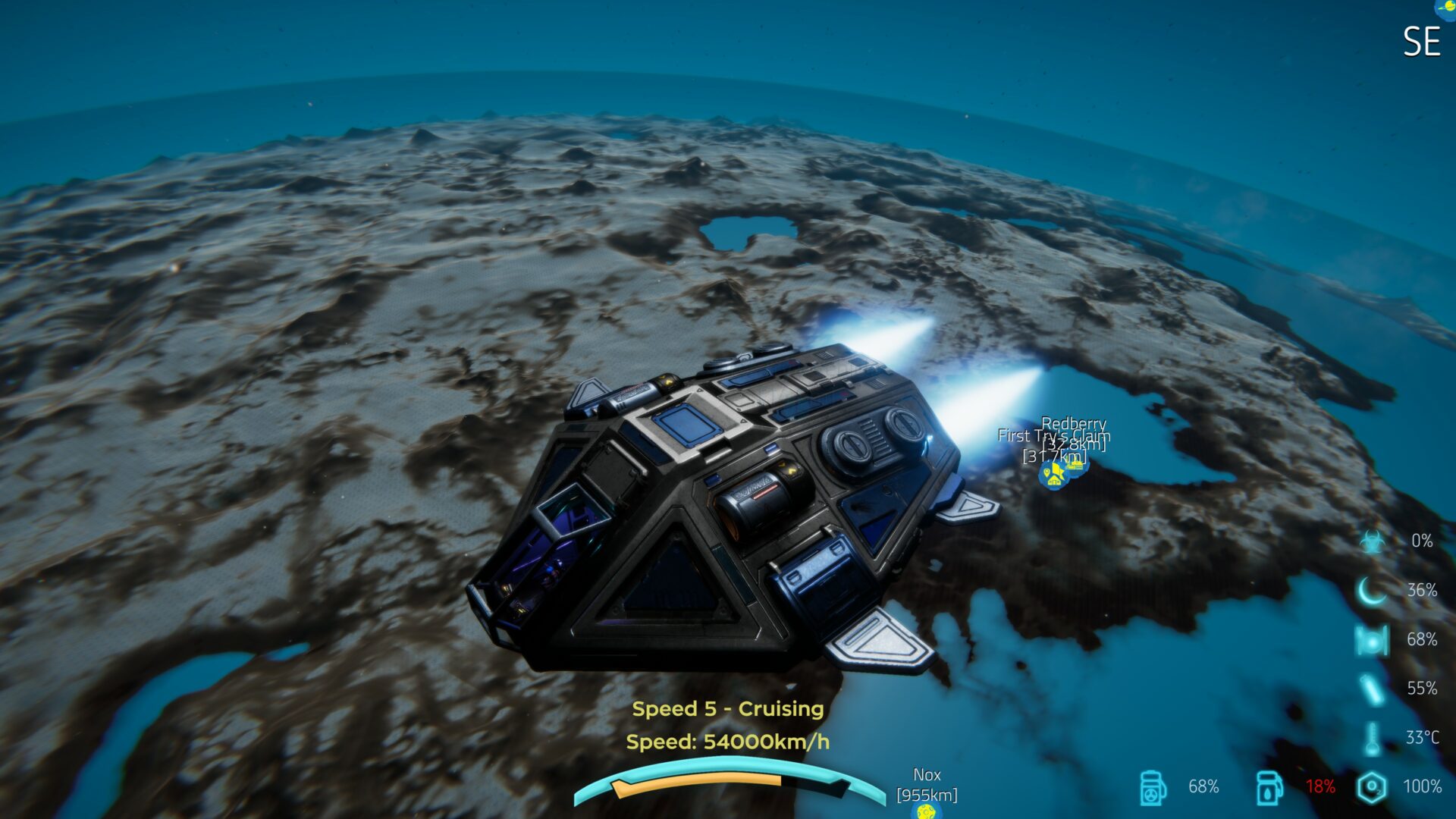 Stars End has potential, a lot of potential. At the moment, however, it’s ugly, buggy, clunky, and, worst of all, extremely limited in content.

It has the very basic framework of an in-depth and interesting survival-crafting game, and I really like the idea, but in its current state it’s simply not worth playing for more than a handful of hours, and even then you’ll spend most of your time bashing things with a pickaxe. If you want to help fund the developers while they work on it, then by all means pick it up, but if you’re after a compelling and enjoyable game experience, I’d suggest holding off on a purchase for now.