A sci-fi puzzle platformer where we play as a sentient jelly blob and everything is out to kill us.

In this game, we play as a sentient blob called Mo. Mo awakens in what appears to be a destroyed science facility, and as it makes its way through it, we start to uncover the aftermath of some kind of carnage there, an experiment that seems to have gone wrong. As we make progress, we gain abilities to help us get through tricky puzzles and ferocious enemies in order to fulfill a mission of some kind that we don’t seem to remember.

The focus of the game is mainly on the gameplay, and it is presented as a puzzle platformer. There are of course enemies and bosses to fight, but most times they are integrated into a puzzle of some kind or are the puzzle.

This is a rather unusual platformer because we’re not playing as a humanoid or even an animal here, so some of the usual rules you might come to expect go out the window. For example, being a jelly blob, we can actually stick to the walls and ceiling. This is not permanent though, as Mo will fall off or slide off after some time, but the time window is long enough to allow us to jump from wall to wall and do things that we wouldn’t as a human character. (It reminded me a bit of Nihilumbra at first, but the gameplay is noticeably different to that) 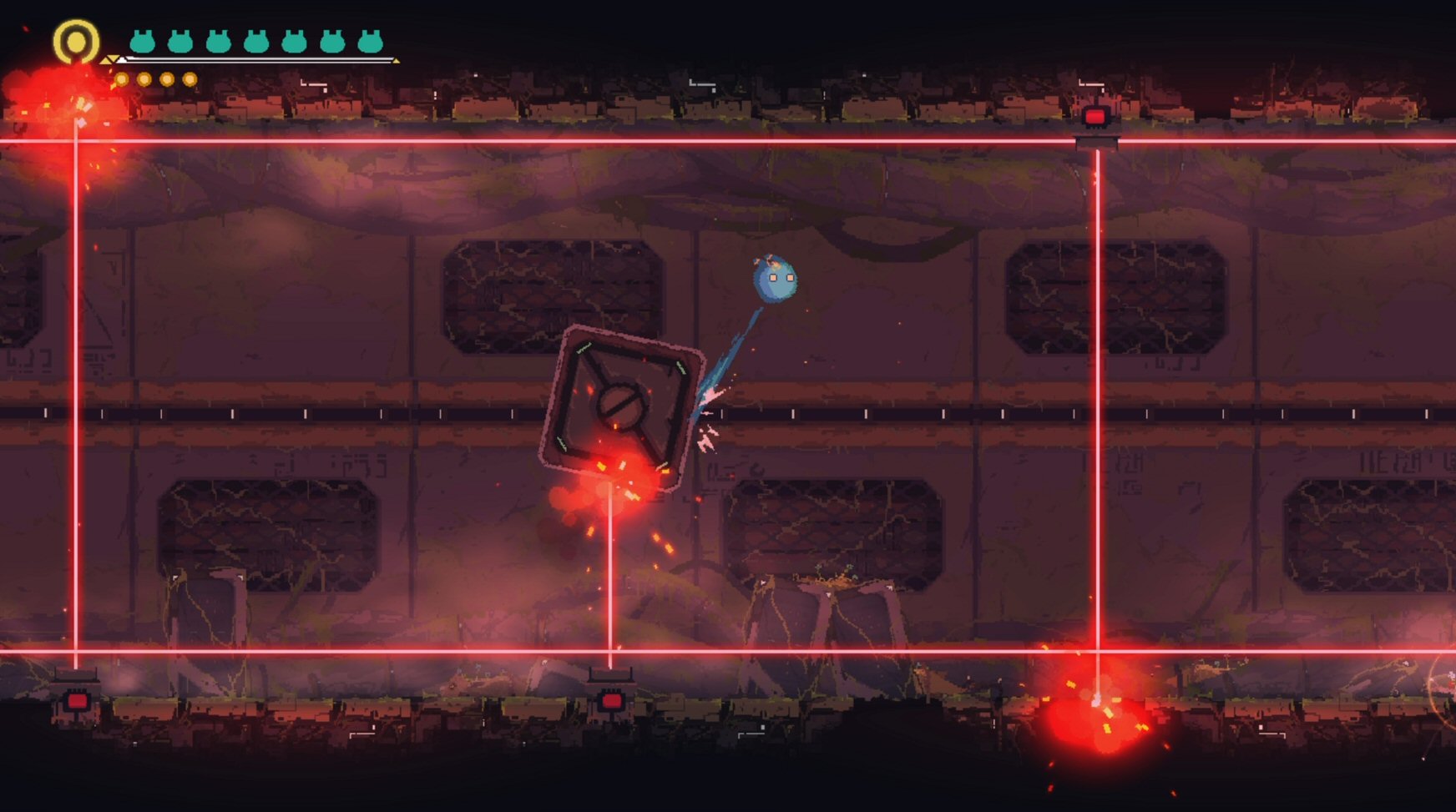 We are also able to squeeze into small pipes and latch onto people’s heads. When I say ‘people’, what I mean are the zombie-like husks of what’s left from the lab personnel, and later on humanoid alien natives. If you latch onto their head, you are able to read a bit of their thoughts and also to have some limited control of them – walking and pressing buttons/levers mainly, which is needed to solve some of the puzzles. 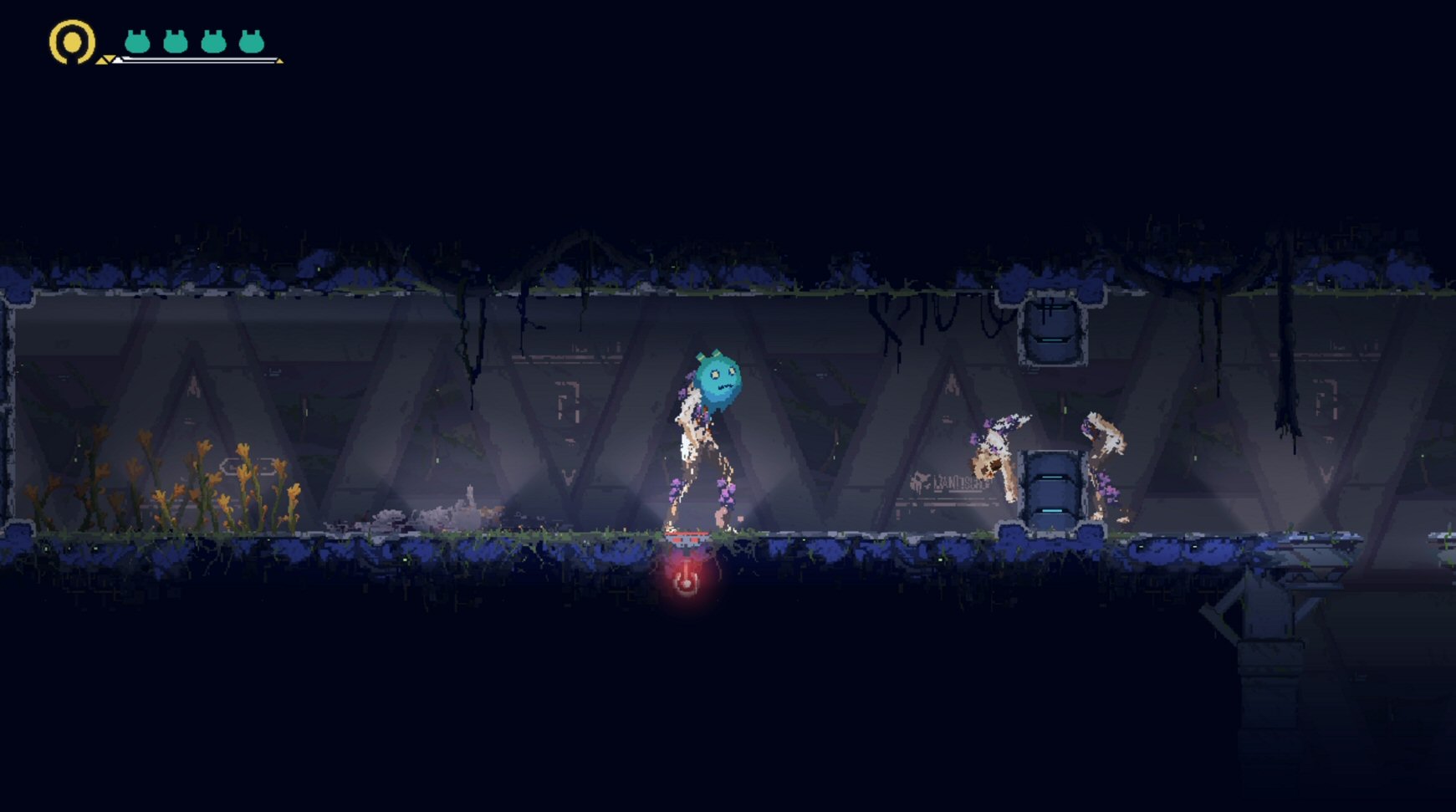 The game doesn’t stick to the same gameplay the entire time, and it does introduce some new mechanics regularly. We learn a double jump after some time and then also a powerful dash attack that can break walls, push boxes, and hurt enemies. But aside from learned abilities, there are novel environmental mechanics too that come up from time to time. We get to create temporary jelly blob clones of ourselves in some sections to help us solve some of the puzzles, such as having the clone step on a button to keep a door open for Mo to go through. In one of the latter chapters, we also come across a strange plant that engulfs us and then spits us out as a balloon filled with gas, allowing us to float in the air and complete some puzzles in that manner.

Some of the gameplay mechanics are pretty great and creative. There were especially a few creative encounters with enemies and bosses, such as one of the boss fights that has you briefly trapped inside a circular contraption and alien natives trying to shoot at you with turrets. Another fun combat part was single-handedly fighting robots while trying to disable the A.I-controlled turrets. There was also a really sweet and kickass mech section where we get to control a mech and shred groups of angry alien natives with our twin miniguns. 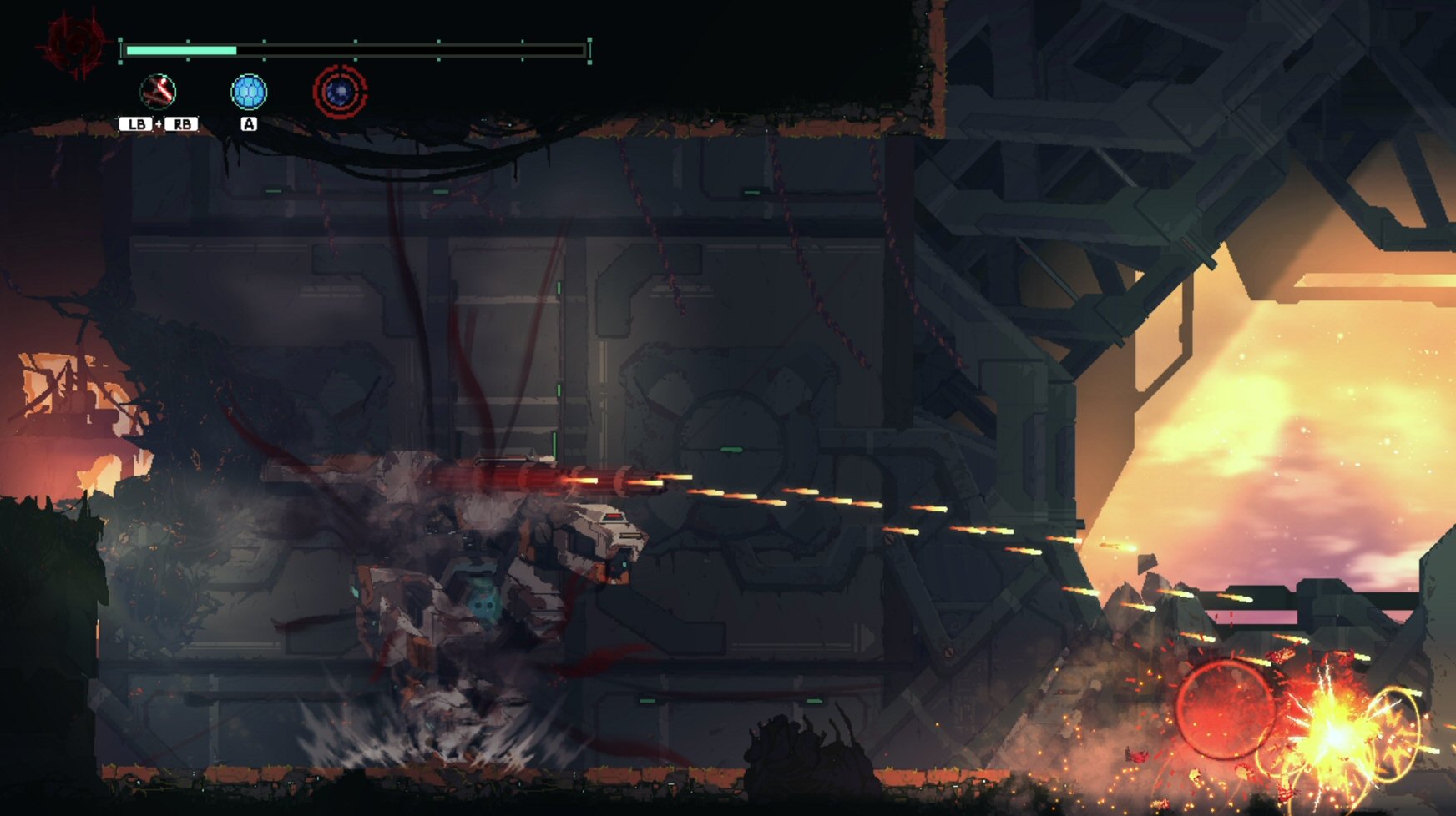 But there were also many sections that were quite frustrating and even infuriating. Even though this is a puzzle-platformer, most of the puzzles actually rely not only on us finding a solution, but also being able to execute it without dying, and in this game, most things one-hit kill you. Most notably, there’s a type of purple alien plant that seems to grow virtually everywhere. It’s basically this game’s version of spikes or lava, that old school games used for something that would insta-kill you. So, this game uses that purple plant insta-kill stuff rather inordinately.

And if it’s not the purple plant that insta-kills you, then it’s the purple water, or the red electric walls, or the laser beams, or the saw blades, or the hungry fish, and so on. There’s always something around to insta-kill you. This can make many of the puzzles feel like you’re treading through a minefield while both of your feet are tied together. It then ends up being more about pixel-perfect platforming and millisecond-perfect timing rather than coming up with creative solutions to the puzzles. In fact, the majority of the puzzles here really only have one solution that you have to execute. 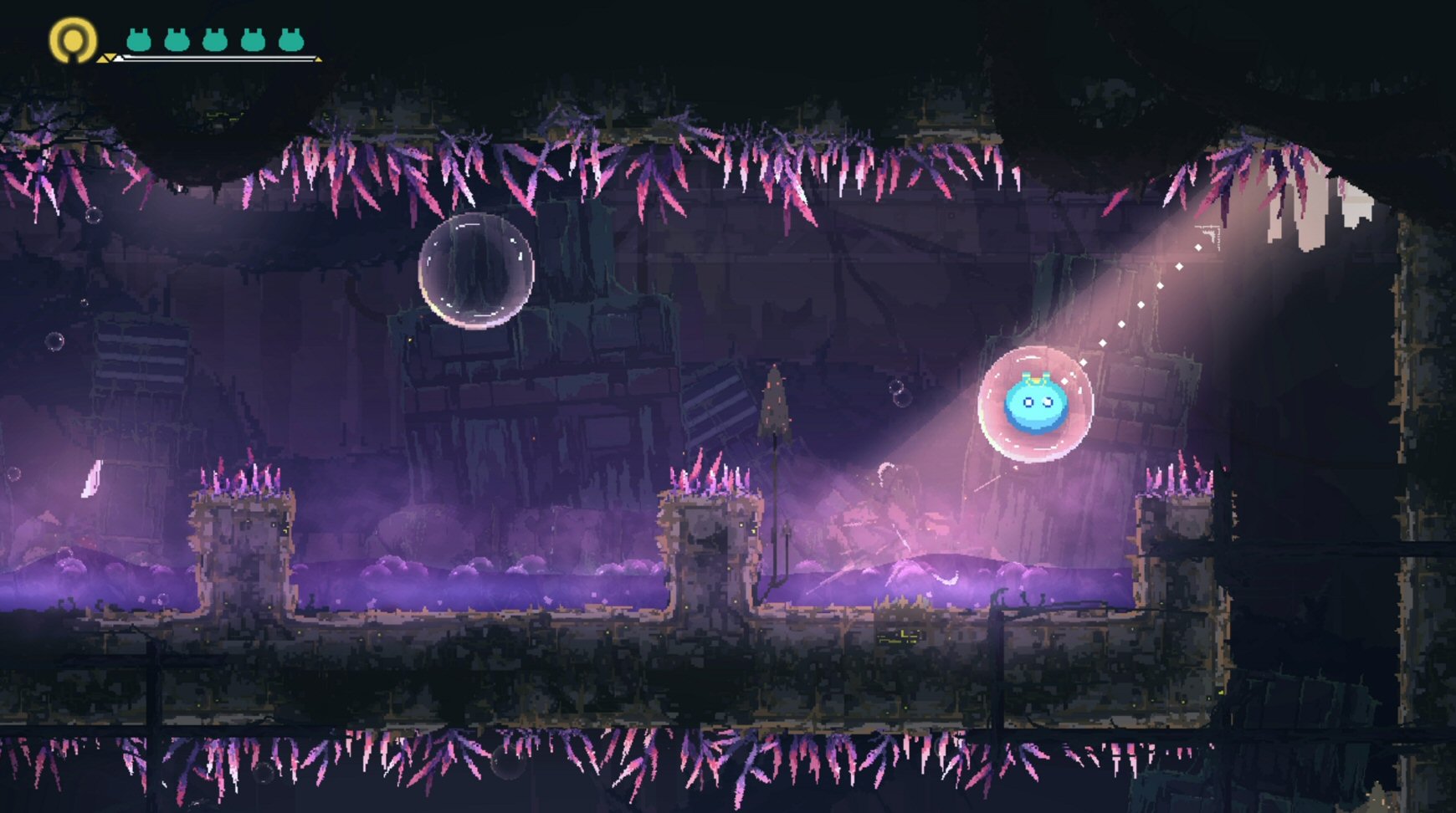 I also found some of the sections, particularly after the first two chapters, to feel like they’ve been padded with too many repetitive puzzles. There have been several instances where I came to an area where I then had to find and activate 3 or 4 switches or 3 or 4 devices or some other things before I could make progress further. And I think the game could’ve easily reduced some of that padding. Getting past some of those sections didn’t feel rewarding, but rather felt like I was finishing one annoying puzzle only to face another more-annoying one that uses similar mechanics.

Don’t get me wrong though. I think in general, there has been a lot of creativity in the game’s puzzles and mechanics. However, some of the challenges felt a bit cheap and annoying, mainly because of how easy it is for just about anything to insta-kill you. On the plus side, the game has been very generous with checkpoints and would autosave your progress after each puzzle, and at times even in the middle of a puzzle (if it’s a longer multi-step puzzle). That greatly saves us, players, a tonne of time in between deaths to not have to repeat the parts we’ve done already.

So, MO: Astray is definitely not just centered on gameplay. There is a story present too, though most of it tends to be in flashbacks, exploration of the environment, and comic strips at the ends of each chapter.

The story manages to remain somewhat cryptic for most parts and tries to get you to guess what happened in the lab and why the alien natives hated your people so much, and most importantly perhaps – who exactly are you and how did you come to be as a living, thinking jelly blob with a strange voice that’s guiding you the entire time.

Having said that, I wouldn’t say this is the game you’d play if you mainly play games for an engaging story. It has an interesting background and world-building, but the execution is not given much of a spotlight. In here, puzzle platforming and combat gameplay takes the front and center, and the story only supplements it. In fact, the difficulty here is rather high, which can easily put off the more casual players. I first started at the Normal difficulty, but in latter chapters decided to change it to Easy so to have a less frustrating time with the game, and I didn’t really notice any difference between the two at all. So, even on Easy, this game is still quite punishing and isn’t suited for casual players who just want to experience its story.

The game has a really awesome and uniquely styled pixel art. All of the environments have been given a lot of detail and have an atmosphere of isolation and danger that still somehow manages to feel peaceful. The characters and creatures are also nicely created and are rather disturbing and ferocious. 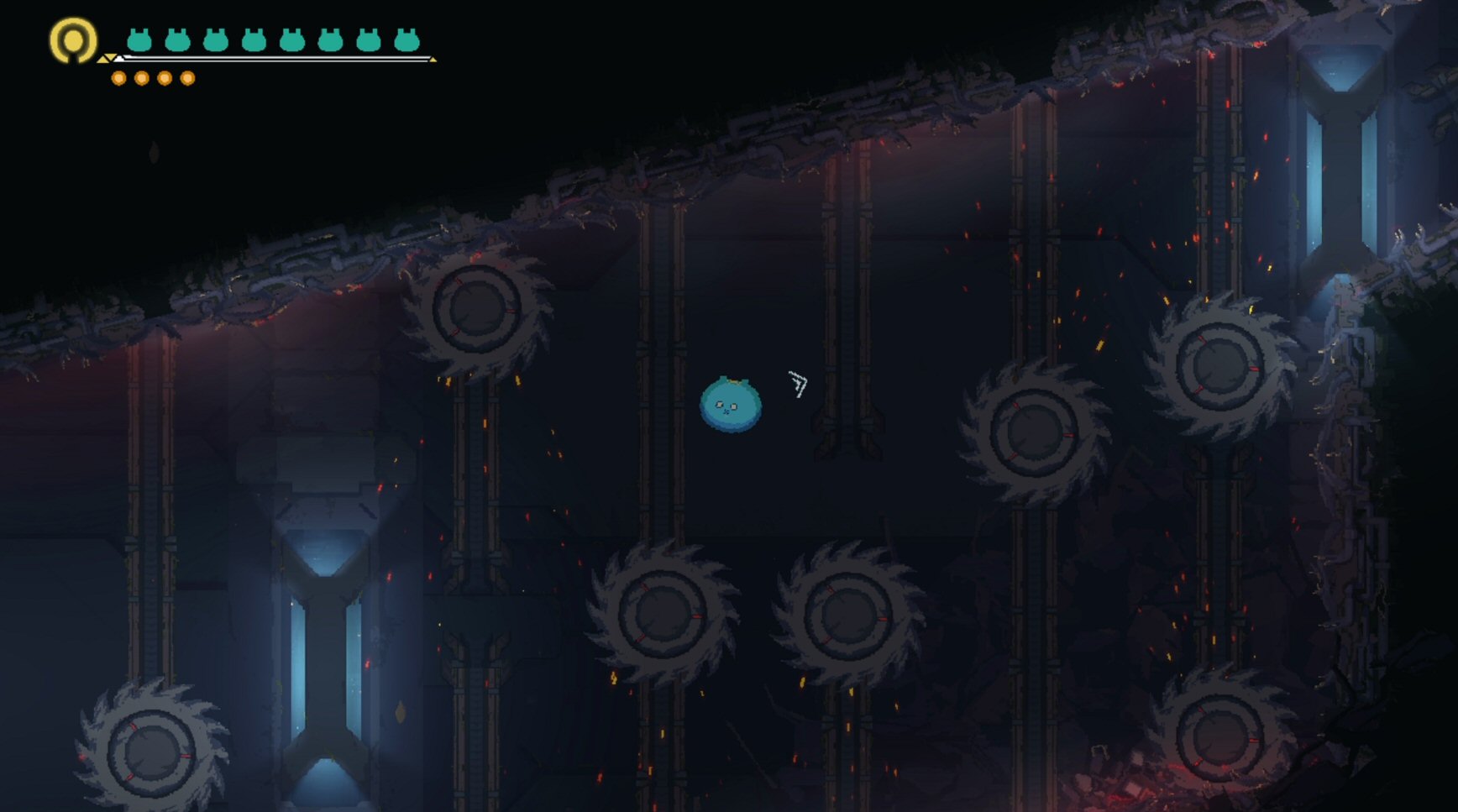 The music is peaceful and ambient for the most part. It’s the kind of stuff you’d hear if you’re meditating and relaxing, which does seem quite fitting here as we explore the ruined aftermath of a catastrophe. It doesn’t really stick out though and I can’t say any of the music tracks were particularly memorable to me, but it serves its purpose well enough.

The game is generally well-polished and has no bugs or glitches, or at least none that I could come across anyway.

I do think the character control could’ve been a bit better in places. When we choose a direction in which to jump, we can also alter how strong of a jump we want it to be. I played on a gamepad, and I found that with analog sticks it’s tricky to alter the strength of the jump and so 99% of the time you’d just settle for the maximum strength of the jump.

Another thing regarding control is that it’s not very clear at times where the hitboxes are on enemy heads that you can latch on. Sometimes when you think you jumped onto their head, you actually didn’t and instead got hurt (touching any other part of the enemy basically makes you lose HP).

MO: Astray is an unusual puzzle platformer with some very nice creative ideas, a generally fun and polished gameplay, and a good presentation. However, some parts will leave you frustrated or even bored and fed up, wishing you can just move on to a more interesting section.

There is a story present that we mainly find out through flashbacks as the game’s events happen way after the climax of the story has occurred. The story is, however, not at the epicenter, and the game’s high difficulty all the more makes this unsuitable for casual players who are mainly after a good story. Those who enjoy challenging platformers and puzzles that test your manual dexterity more than your wits should have an absolute treat though with this game.

It’s a decent game overall, and most of its criticisms would mainly be down to personal preference rather than objective flaws. It’s more about whether you find the gameplay formula to be fun or not.