Does the idea of slaughtering demonic hordes while an awesome heavy metal soundtrack blares in the background appeal to you? If it does, that’s what Down to Hell is offering, but instead gives gamers an unappealing, frustrating mess that fails deliver on anything it promises. 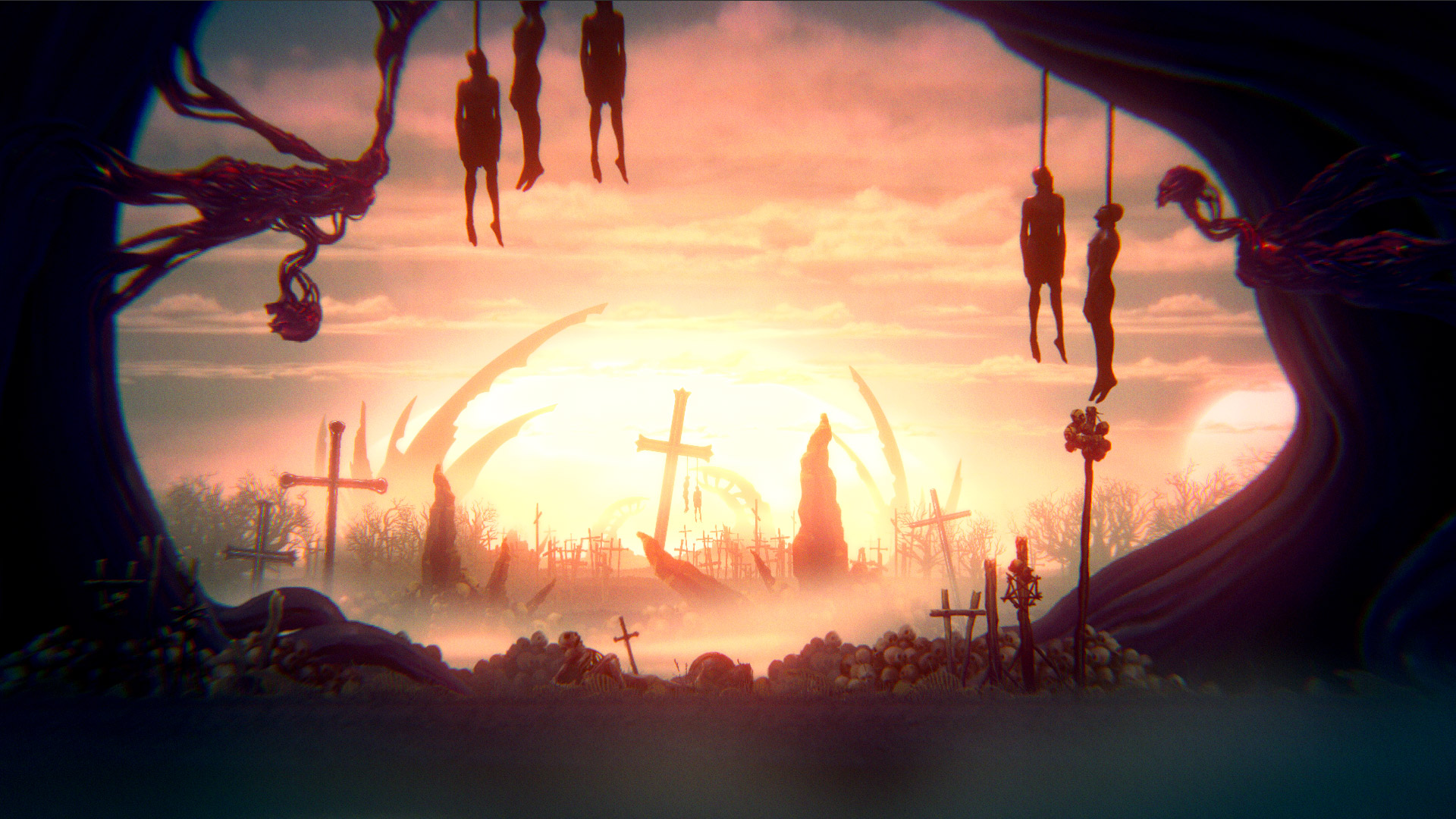 All of Down to Hell’s visuals are entirely 2D. Every character has very stilted animation and the characters’ limb articulation is so bad that I thought I was looking at an old Flash game. In contrast, the non-animated drawings shown in cutscenes look fairly impressive.

To say that Down to Hell’s color palette is limited is an understatement. If you like black, brown, yellow, white, and red (especially red!) then you’ll love this game’s look. I have nothing against that color palette in and of itself, it’s just that after a while everything tends to blend together. Sometimes the only thing that told me this or that was an enemy was because they were moving, not because they were visually identifiable from the surrounding graphics. 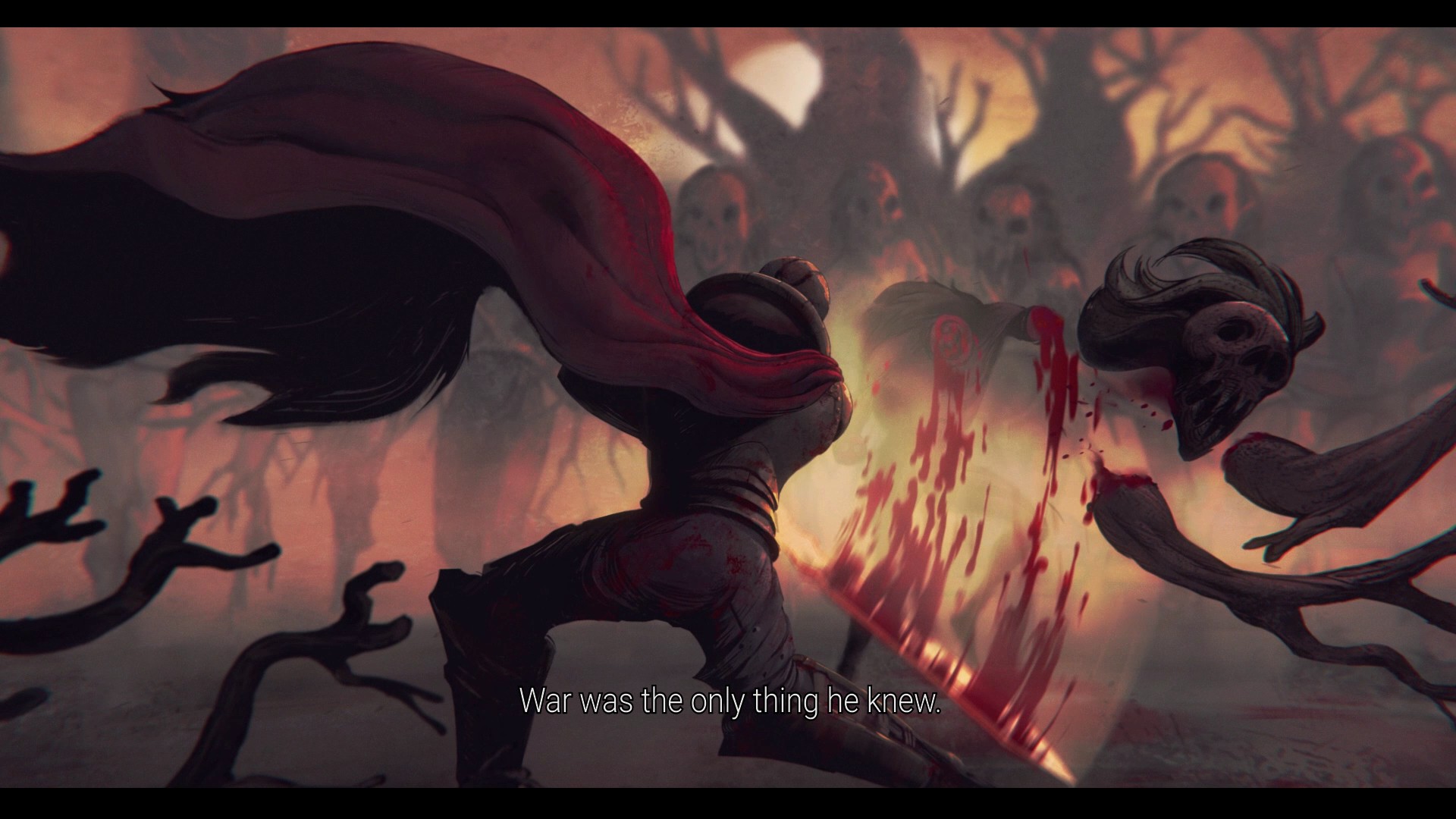 Sound effects are few and far between. While you can hear your character swing his sword or recognize the sounds of an enemy projectile attack, overall there’s very little auditory stimulation.

Down to Hell’s music is incongruous with the game itself. During most of the game where you’re running and jumping while hacking apart rank-and-file enemies, the background music is so bland that it nearly put me to sleep. That’s quite a feat considering the game’s action-oriented gameplay.

The music abruptly changes, however, when you fight a boss. Then the game’s advertised heavy metal score roars to life.

Unfortunately, the heavy metal the developer chose is so stereotypical that it actually made me laugh. As someone who’s listened to his fair share of heavy metal, I know there’s a wide range of music within that genre. In Down to Hell it’s closer to a screaming diatribe than anything that might qualify as music.

The game start with a (thankfully skippable) tutorial that sets the tone for the rest of the game: you running left-to-right, slicing apart low-level enemies until you come upon a boss character. The boss characters only require a slightly more advanced tactic to defeat. For instance, the first boss—named Crimson—is a cross between a nightmarish monster and a flea. 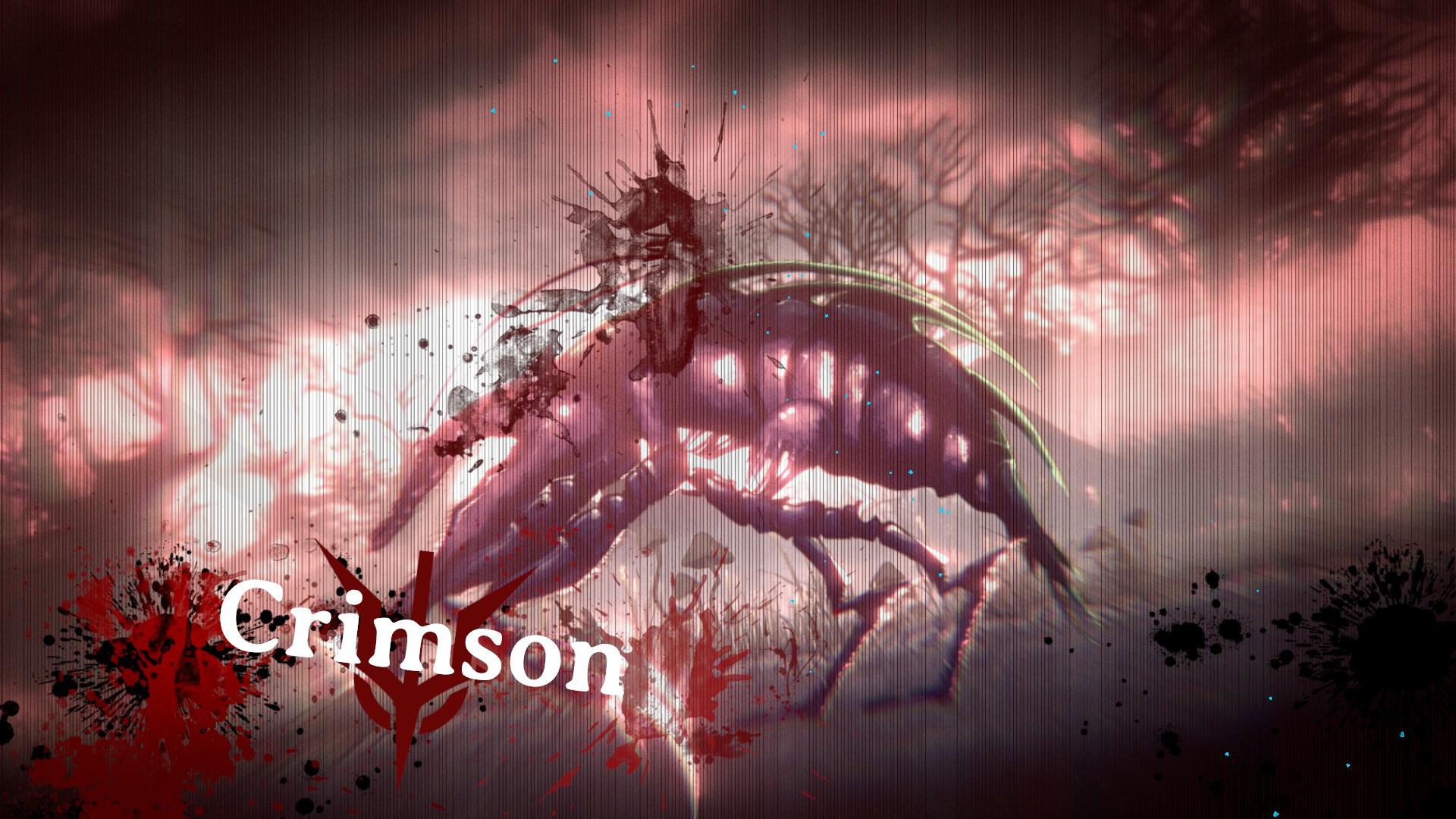 Crimson’s fighting style is to spawn babies that run after you while she periodically charges at you. In response, you have to kill her monstrous children, and then quickly jump over Crimson, turn around and slash at her. When Crimson swings around, you repeat the process for the next ten minutes or so until you finally whittle down her health and win.

After defeating Crimson (or any boss creature) you’re rewarded with a chest that holds three choices: increase your mana, health, or damage. Over time you can increase your stats and even gain new swords, and collect information about the monsters you’ve been fighting. 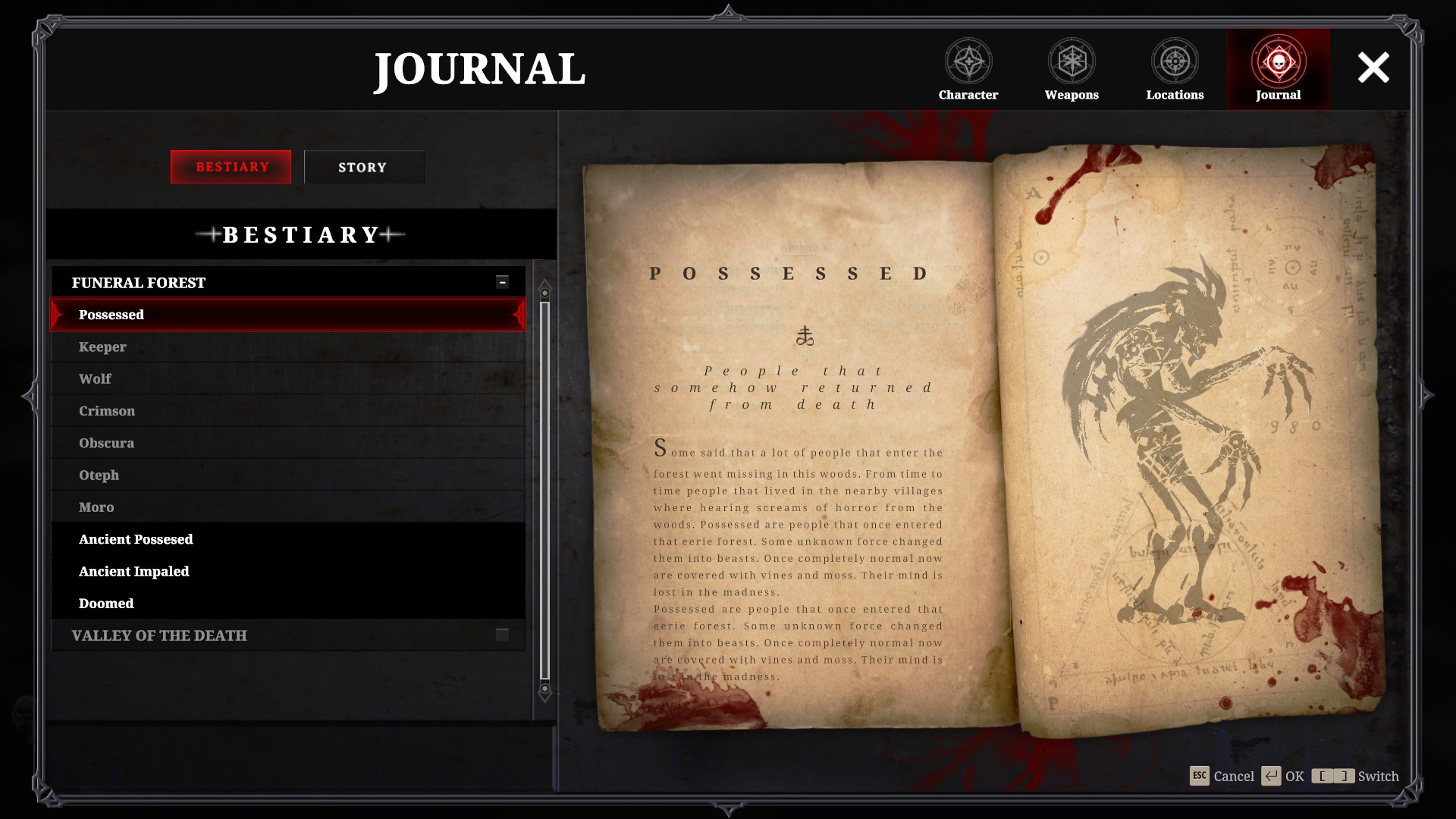 Combat can be a chore, however, because Down to Hell demands that you engage in never-ending repetition. If nothing else, developers need to learn that repeating the same action over and over is only enjoyable when it’s chosen. Repetition becomes aggravating when it’s forced upon players.

Linked to the repetitive gameplay is Down to Hell’s obscenely high level of difficulty. I know some gamers will see this as a positive, and if you enjoy beating your head against the wall, have fun. For the rest of us who want a fair level of challenge while not getting constantly punished, Down to Hell’s overall difficultly will quickly become frustrating to the point of quitting or even refunding the title.

Down to Hell isn’t a rogue-like (or even a rogue-lite), so you can save your game, although this is limited to specific save points.

The upside to these save points is that they always completely refill your health and mana potions, so you never need to continue without provisions. You can also backtrack in the game, so it’s possible to “force a save” by going back to a previous save point.

There is absolutely no capability to manually save your game, so make sure you visit a save point before exiting the game or you will have to redo parts you’ve already completed. I feel that this is a major oversight that could have easily been fixed by including a “save and quit” feature. 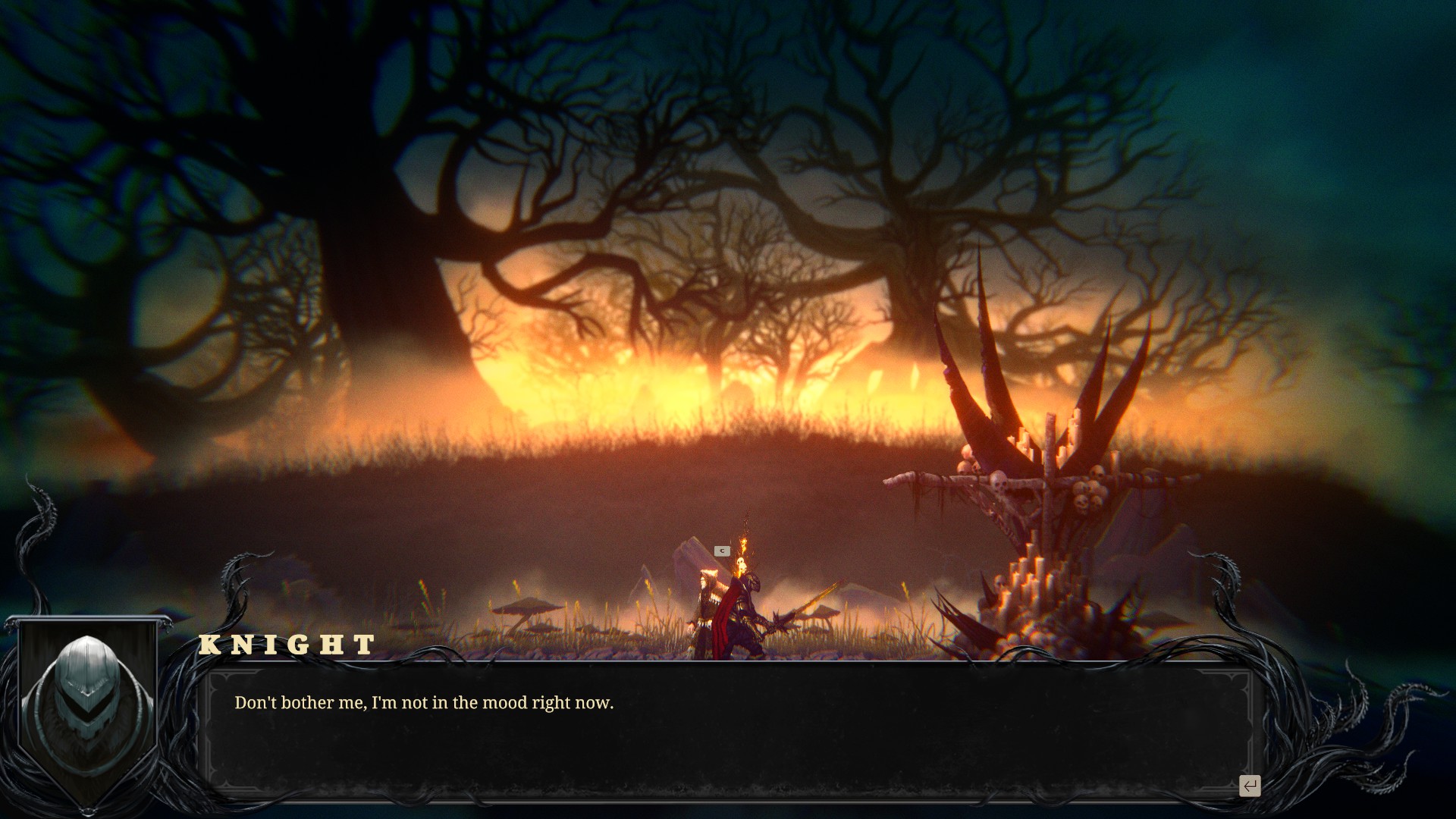 I’d also like to add that Down to Hell isn’t free from bugs, either. The first time I went into the tutorial the game got stuck during a combat sequence that endlessly spawned enemies. Beginning a new game solved this problem and allowed me to progress, but that’s a very unimpressive introduction to the game. Fortunately, I didn’t come across any other bugs while playing, so perhaps the bug I encountered was unusual. Even so it’s something the developer needs to fix.

You fill the armored boots of an angry, unnamed knight, who’s apparently engaging in combative self-help therapy by killing demons. At one point, the post-tutorial cutscene shows the knight is injured and prepared to die, but at the last minute he’s saved by a mysterious girl with magic powers. Naturally, this girl is then kidnapped by a grotesque monster and it’s up to you to rescue her. 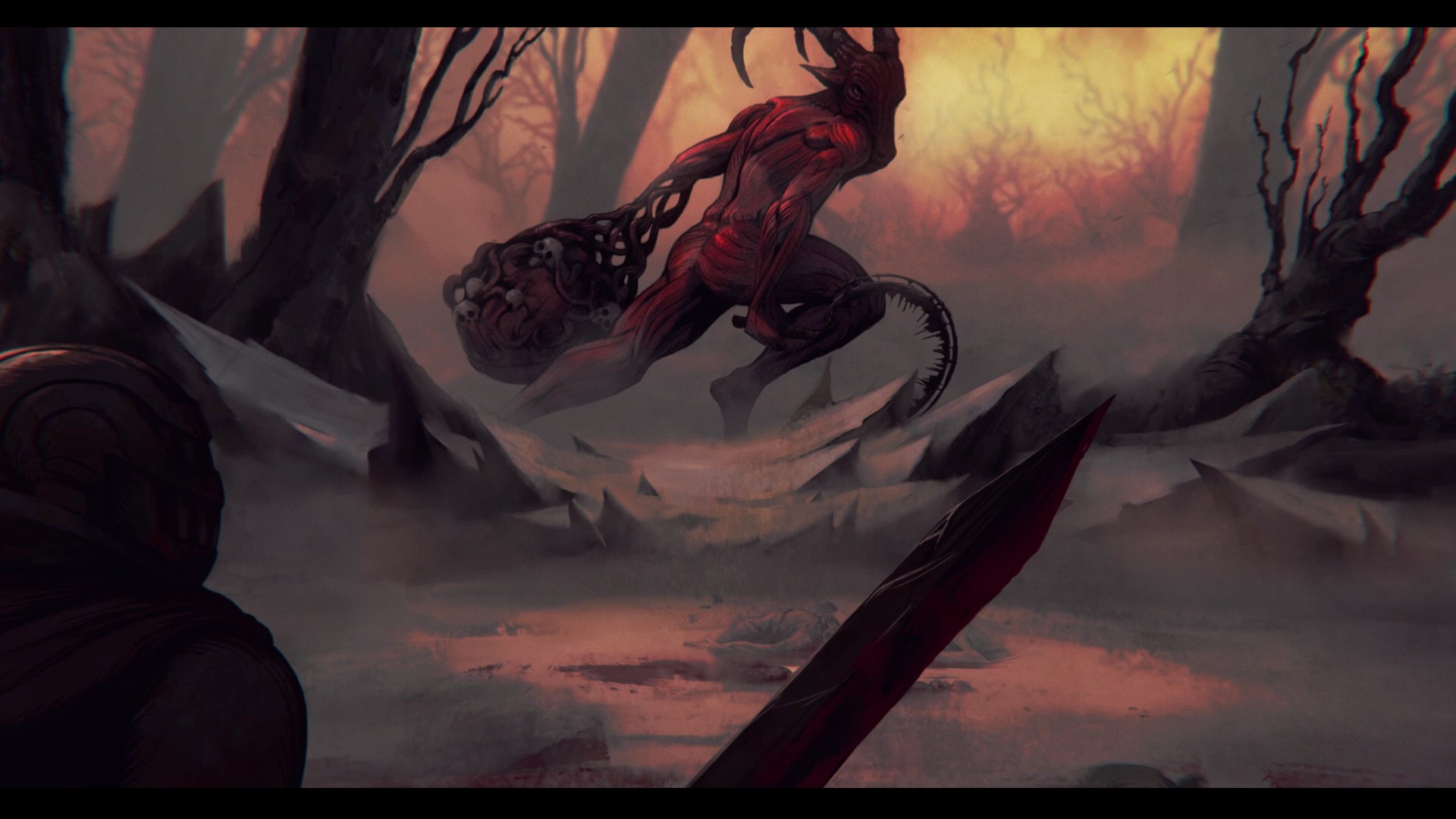 Throughout the game you’ll meet an old man in a cloak who imparts less-than-useful tidbits of wisdom at save points. Honestly, this guy reminded me of the first person you meet in The Legend of Zelda (for the Nintendo Entertainment System) who claims, “It’s dangerous to go alone, take this!” The major difference, of course, is that old man at least gave the main character a weapon, whereas the old man in Down to Hell does nothing.

Maybe the old man you meet isn’t very helpful because the player character (the knight) is a major jerk with the personality and charisma of a blueberry muffin. No, you can’t choose what to say at any point in the game, and while this isn’t unusual for this type of game, the lack of player choice makes it impossible to be friendly or at least cautiously polite.

Perhaps the developer was going for the “rough, jaded action hero” feel, but most of those characters at least have some sort of redeeming quality. I never found anything remotely likable about the knight. That’s a problem for me because I need to empathize at least a little with the character I’m playing to care about that character’s struggle. 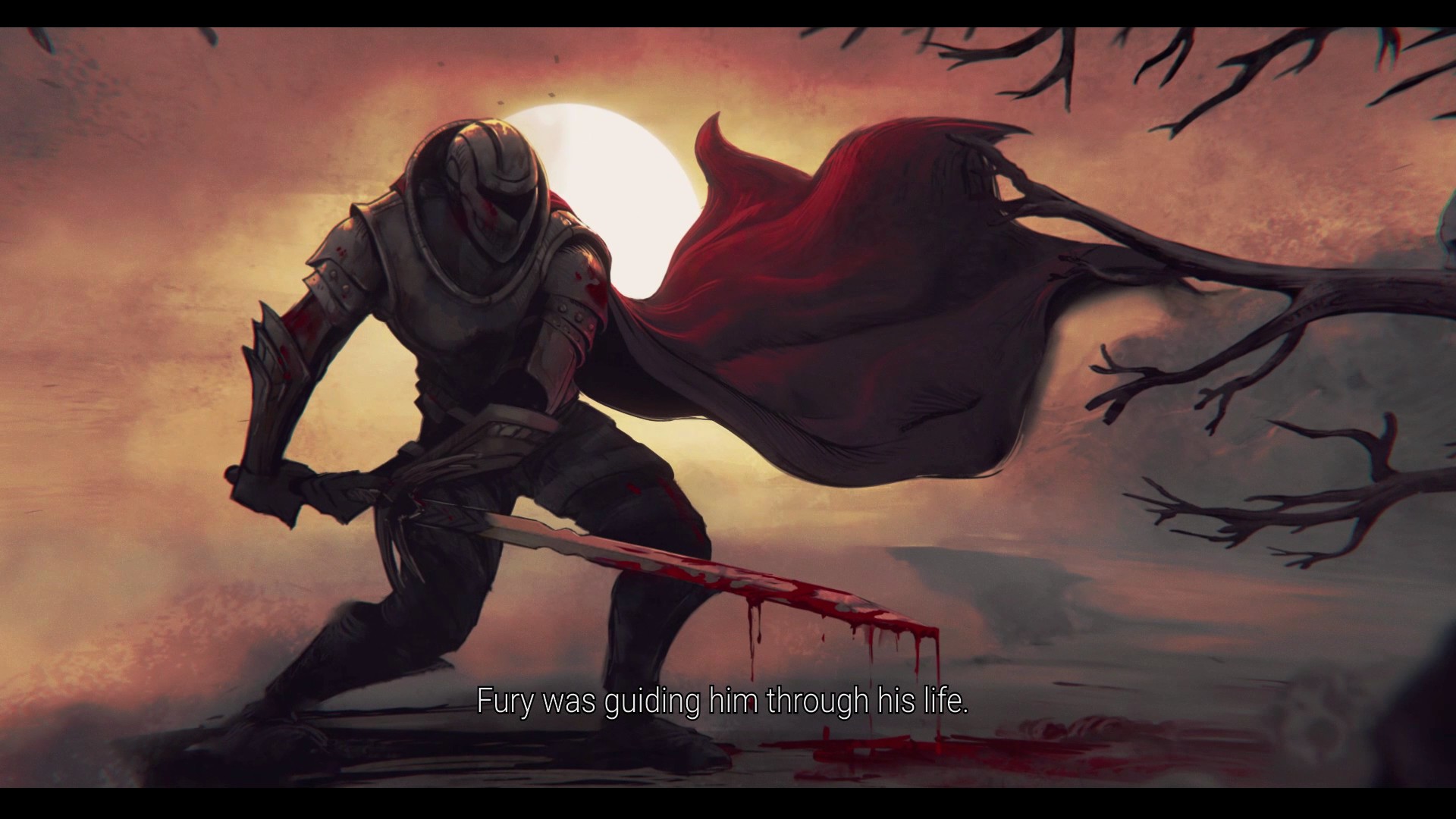 There’s very little that I find appealing in Down to Hell.

The repetitive combat, boring level design, limited save game mechanics, ridiculously high level of difficultly, lackluster enemies, poor graphics and bland color scheme, awkward music that changes into a heavy metal stereotype during a boss fight, unimaginative storyline (what little there is of it), and highly unlikable main character ruin any enjoyment I might have potentially derived from Down to Hell.

The only reason I’m even giving Down to Hell a “QUIT” rating instead of “RAGE QUIT” is that despite Down to Hell’s laundry list of flaws, it’s not a scam or a rip-off. I fully believe the developer set out to make a decent game and failed or produced something that will only appeal to a very niche audience. Whatever the case, the vast majority of gamers are likely better off avoiding Down to Hell. 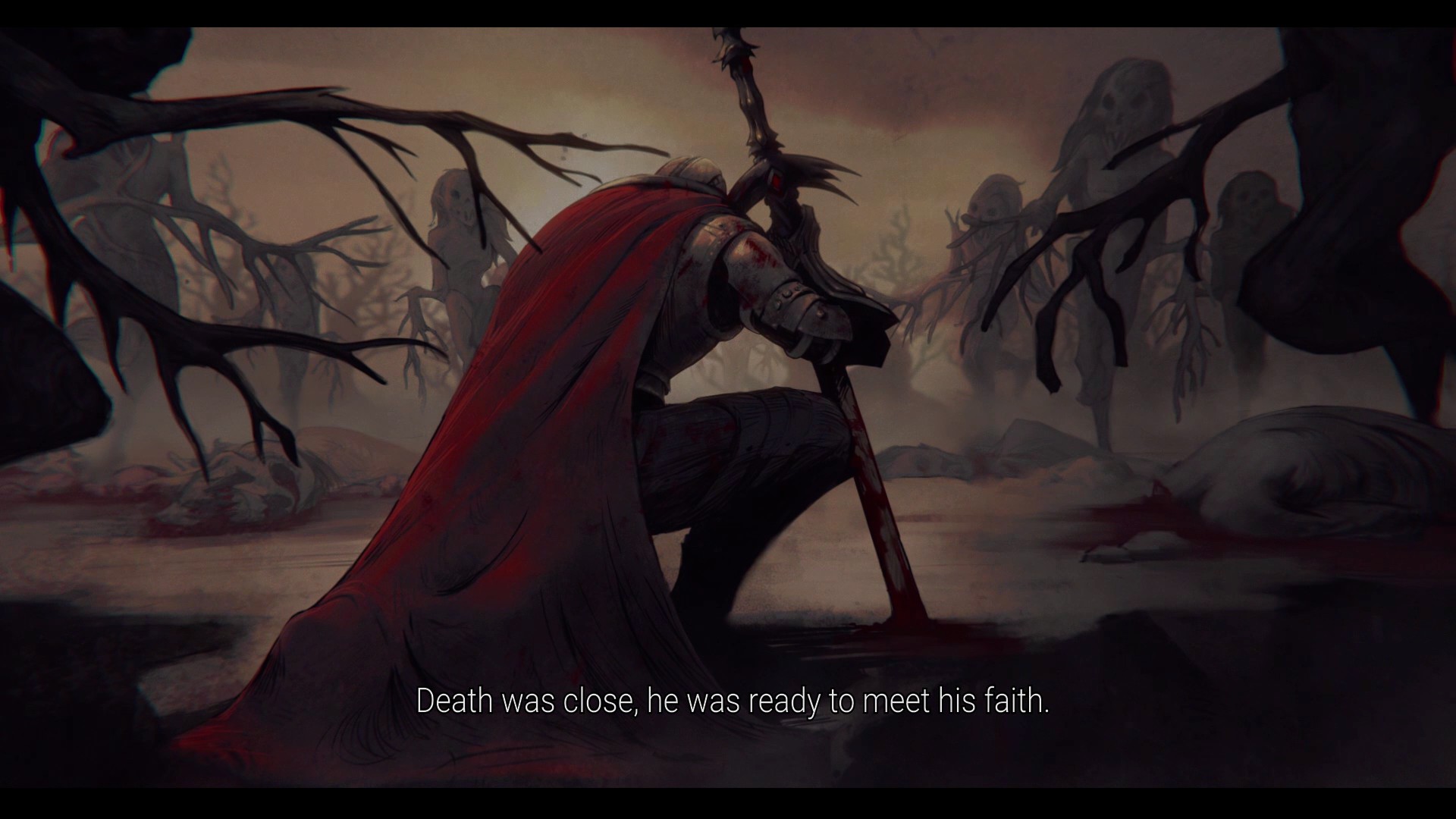