A simple farmer woman with no combat experience of using a sword takes on an assortment of menacing fantasy creatures.

Driven Out is about a simple civilian woman with no combat experience being forced to flee her home and fight dangerous creatures all over the land, creatures such as armoured bears, a fencing frog, a gorilla wearing what looks like a spacesuit, a goat with so much muscle that will make a bodybuilder jealous, and many others. To do that, the game provides us with a sword, a mystical device that allows us to place checkpoints when it’s charged with energy, and a block/parry system.

The mechanics of the fights are fairly simple, but how we use them against each enemy can vary quite a lot. We are able to strike enemies in 3 ways – a high strike, a mid-section strike, and a low strike. Likewise, when we block, we can block in those 3 directions too, and this is where most of the challenge comes in, because it’s not only the timing of the block that’s important, but also where we block. If we do a low or a mid-section block when an enemy is executing a high attack, then the attack would connect and likely send us flying backward. So, this can make fights rather tricky as it becomes of utmost importance to study and remember enemy attack animations. Most enemies don’t seem to have specific patterns of attack and will pull their attacks out randomly, so we have to rely more on twitch reflexes than an elaborate plan.

If we block at the correct time just as the enemy attack is about to connect, then we perform a parry. Doing so on many enemies causes them to get stunned for a couple of seconds, allowing us to deliver a free hit or two, but there are also many enemies in the game that do not get affected by a parry at all, which is a bit disappointing. Most times you’d execute parries by accident anyway. 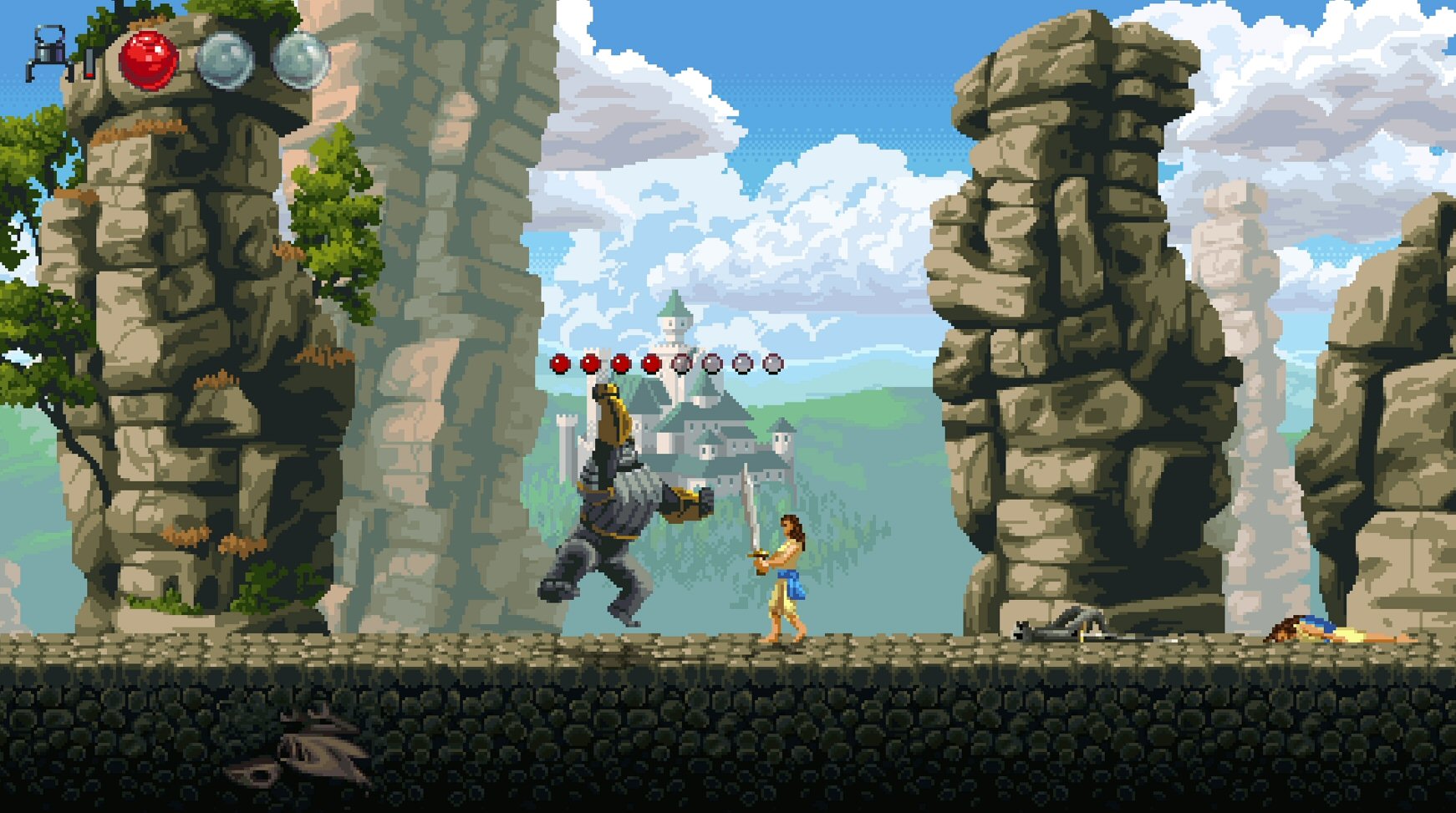 Our character only has 3 hit points. Getting hit 3 times is game over, no matter what. There are no powerups or level ups or any other ways of increasing the maximum HP or other stats. The game, however, does provide us with a mystical device that allows us to place our own checkpoints.

The way this device works could be a little confusing at first. First of all, it’s worth noting that we can’t really place checkpoints whenever we want. We can only do it if the device has a sufficient charge (which is represented by a small cyan bar on top left of the screen), and it only gets charged up when we defeat boss enemies. Usually there’s only enough charge to place the checkpoint twice between each boss, so some thought has to be given to where and when we place them. 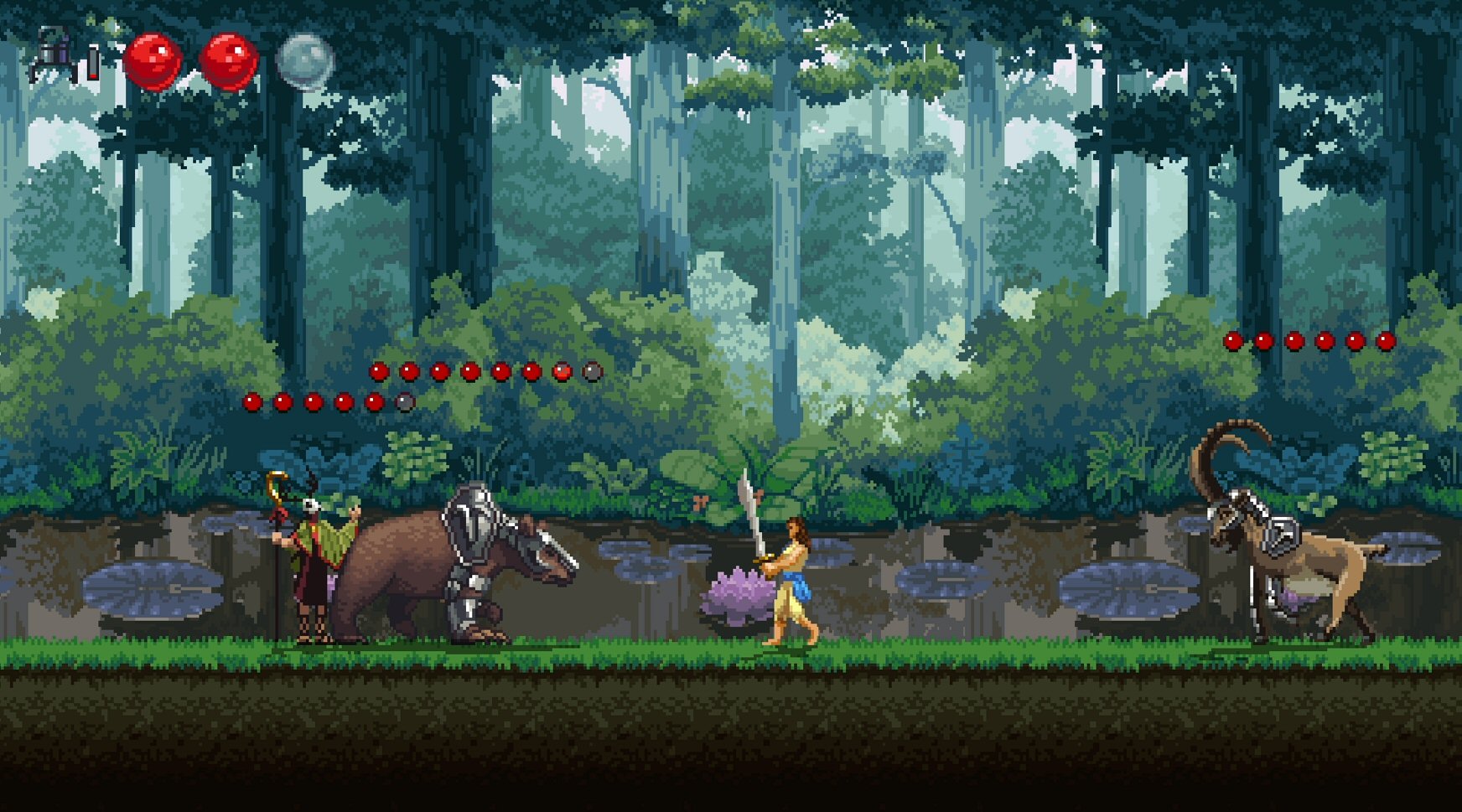 The game also has an automatic checkpoint, and that is after each boss you slay. So, if you mess up the placement of your manual checkpoint, you can always restart from the last boss you killed, with the device fully charged. Sometimes this might be necessary if you want to redo a certain section and only use the manual checkpoints in latter parts of those sections prior to a boss.

My personal opinion is that this checkpoint system is a bit fiddly and annoying, so I’m not a big fan of it. The way the areas are set up also, you’d end up backtracking a lot and walking from area to area loads, so if you had to backtrack a long way, you’d already end up wasting one checkpoint at the start of the next area you want to go into, or else if you don’t, then dying could mean having to backtrack from the last boss again, which is a massive pain in the backside.

The Challenge, The Reward, The Frustration

I wanted also to talk a bit about the kind of challenges and enemies to expect. There actually isn’t an enormous number of enemies in the game, but because each of them is tricky, you might find yourself spending a long time on each one section of the game. In fact, the game has a rather steep difficulty curve from the very start. After the first village area where you fight knights and inquisitors, which isn’t too hard and should take you no more than 10 or 15 minutes, you are then faced with 3 possible areas to go to, and in each one the difficulty spike is pretty steep, and suddenly you start finding yourself getting killed in seconds and watching your body get flung left and right. You’ll almost always find the enemies to be faster and more agile and they also have a better reach than you. You are the underdog, so prepare to die… a lot. 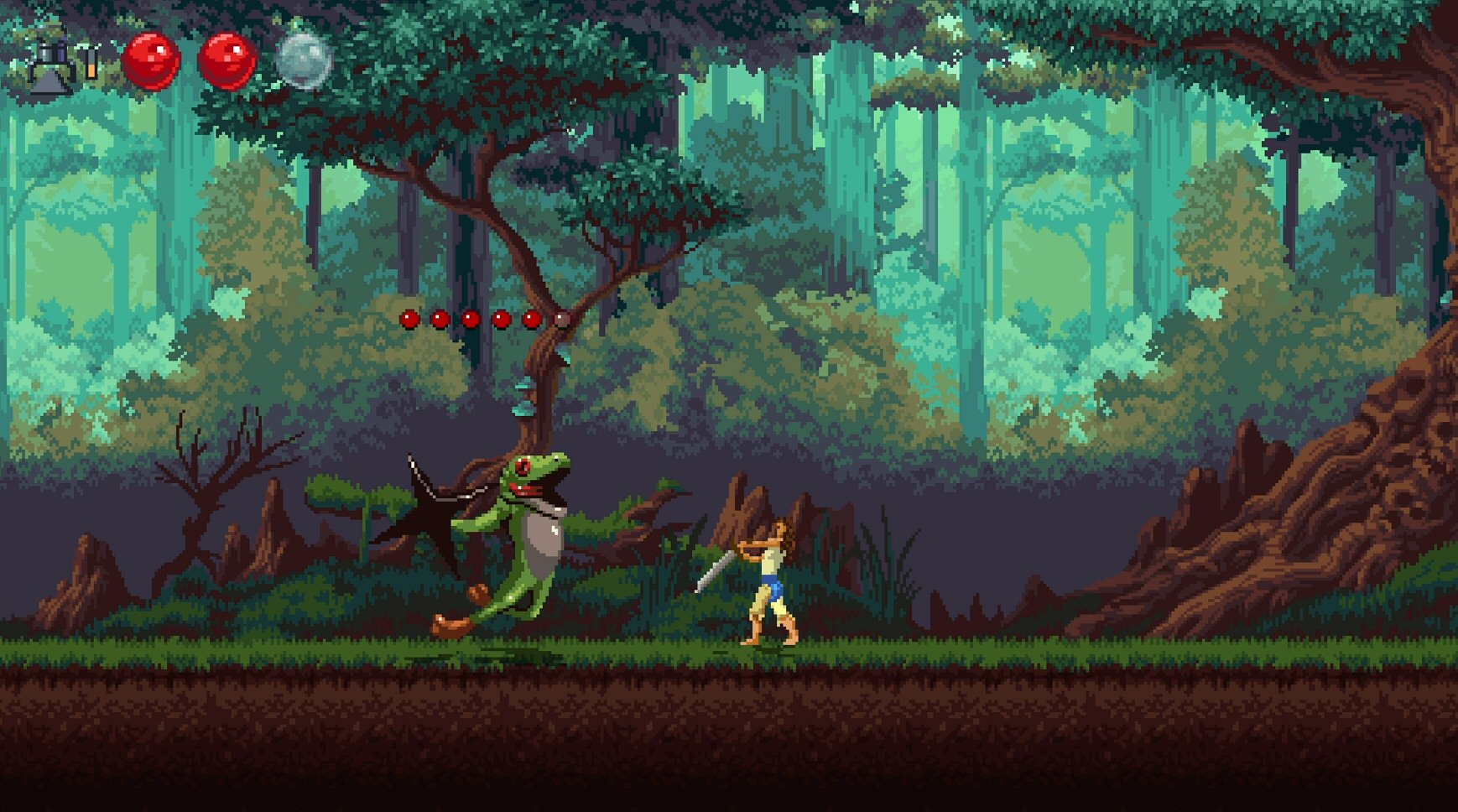 So, in that regard, I think it can get very infuriating and put off many players before they can have proper fun with the game. I think the game could’ve ramped up the challenge a bit more gradually.

If you do manage to get through the initial frustration, then you’ll find quite many of the fights rather fun and rewarding, if at times infuriating still. It then makes you curious to see what other challenges the game is hiding and what sort of narrow victories you could pull off. The game definitely has some charm to it, and you’ll often find yourself trying again and again despite countless deaths, always going “just one more time”.

At times I felt that the challenge was really uneven in some stages. Like, normally you’d expect the enemies to get progressively stronger as you traverse a certain area, with the boss being the strongest enemy. But this is not always the case.

For example, in the castle area that’s filled with werewolves, we meet 3 types of werewolves – the small ones, which are fairly straightforward to handle, a medium werewolf, and a big werewolf that acts as the boss of the area. I personally found the medium werewolf to be significantly harder than the boss and he caused me many deaths and grievances in the early stages of the game. On the other hand, the werewolf boss I managed to handle on my 3rd or 4th try without much of a problem. 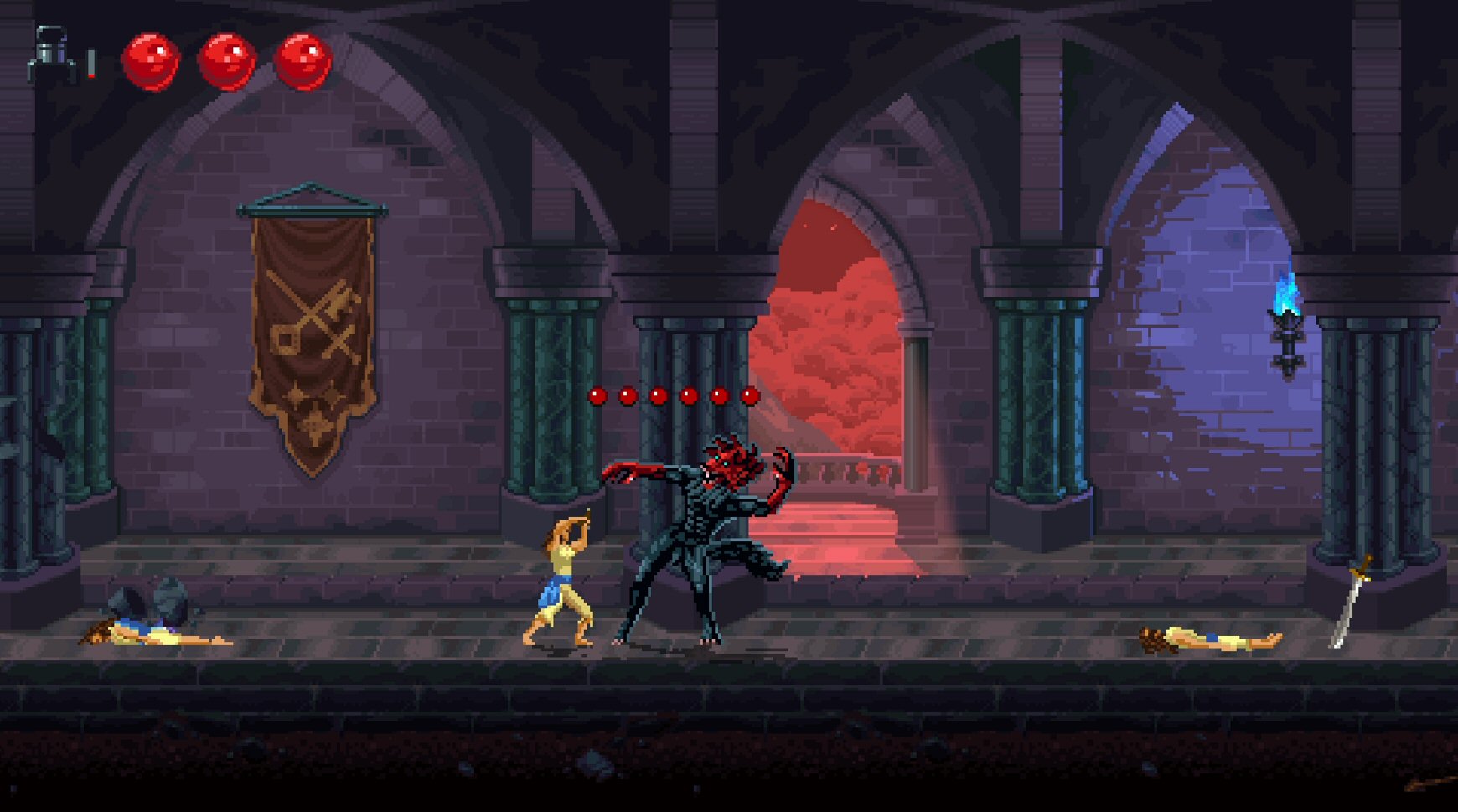 A few of the enemies felt rather cheap which I didn’t enjoy fighting much. In one area there’s a big magpie that slaps us with its wing, and its mid-section attack and low attack have almost identical animations. You have to really look carefully to tell them apart, which is difficult in a fast-paced combat. Another enemy I wasn’t too fond of are the dragon warriors that dual wield two daggers. It can be hard to tell apart which of their strikes corresponds to which height, and they always deliver 3 strikes in a row. Even though they have about half a dozen of combinations, it’s still inhumanly hard to adapt to their attack combo after they began executing it, so a lot of the time, fighting them felt like I was relying on luck and hoping that I’d predict their sequence of attacks correctly. 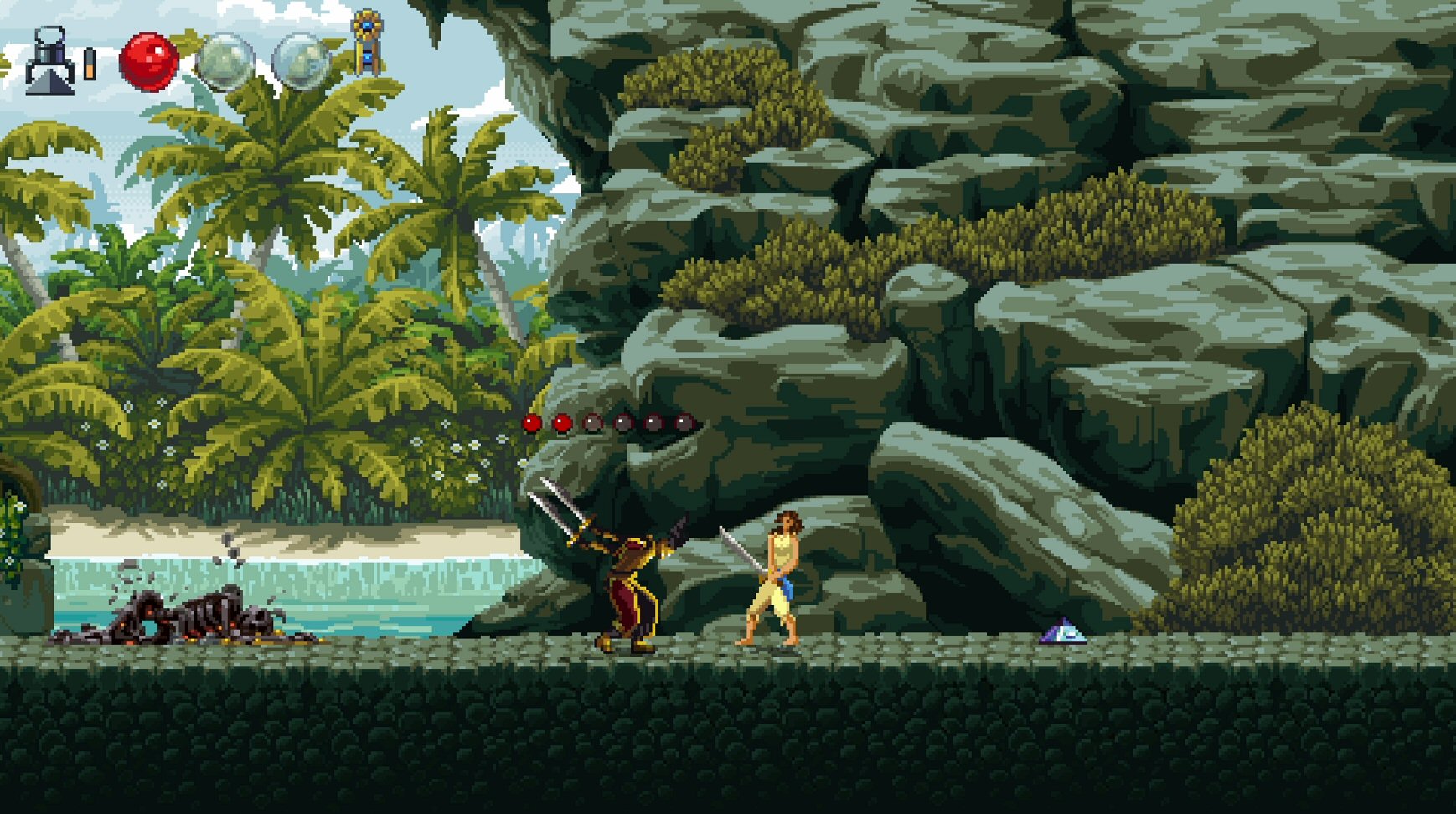 The game has a fantastically beautiful pixel art. All the environments, characters, and enemies are done incredibly well. A game like this relies heavily on enemy animations, and I think, aside from a handful of examples, most were done really well.

The game’s world is really colorful and really interesting. Even though there’s not much of a story here, the world itself has a strange charm to it and is executed with creativity. It makes you want to explore it and find out more about it, as well as about the strange enemies we come across, such as the forest frogs or the monkeys, all of which wield weapons and appear to be semi-sentient. I wish there was some lore about all these beasts we could learn about.

The music is really pleasing on the ears in virtually every area of the game and complements the game’s world amazingly well. I greatly enjoyed the soundtrack to this game. A few of the tracks particularly stood out, such as the druid fight music, the forest of frogs, and the monkey cave. 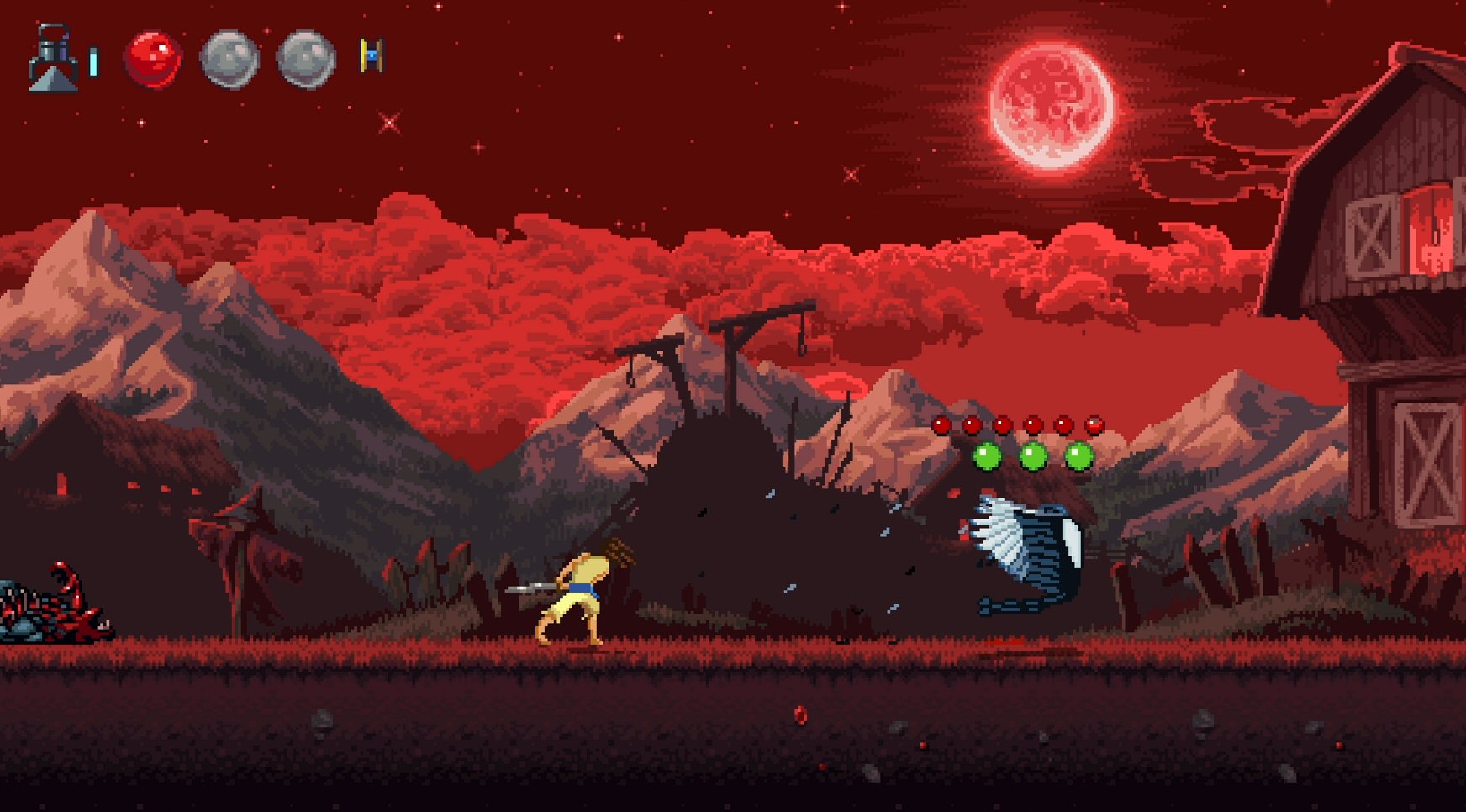 Despite the steep difficulty curve early on and some frustrations with the challenge, I think the game has a lot of charm and is presented really well. It’s hard to deny that it oozes quality. Its pixel art and music alone should keep you interested long enough to get past the initial difficulty curve and to start having fun with the battles. (Moreover, it’s a bit funny at times to see your character’s body get flung about by big enemies)

However, vast majority of the challenge here revolves around twitch reflexes, so if you aren’t good at that, or if you find that sort of gameplay to be too stressful, or if like me you simply prefer challenge that’s more tactical and strategic in nature, then you might only get a limited enjoyment from the game or might want to pass it up completely.

A rather nice game with a lot of solid strengths, but certainly not for everyone and is more niche in nature.