Rise through the ranks and vanquish your foes!

Ever wanted to command a naval military vessel during the Age of Sail? Pretend you’re leading the HMS Victory against the French and Spanish at the Battle of Trafalgar? Well, Her Majesty’s Ship gives you the chance to do that in a simple yet difficult game to master. 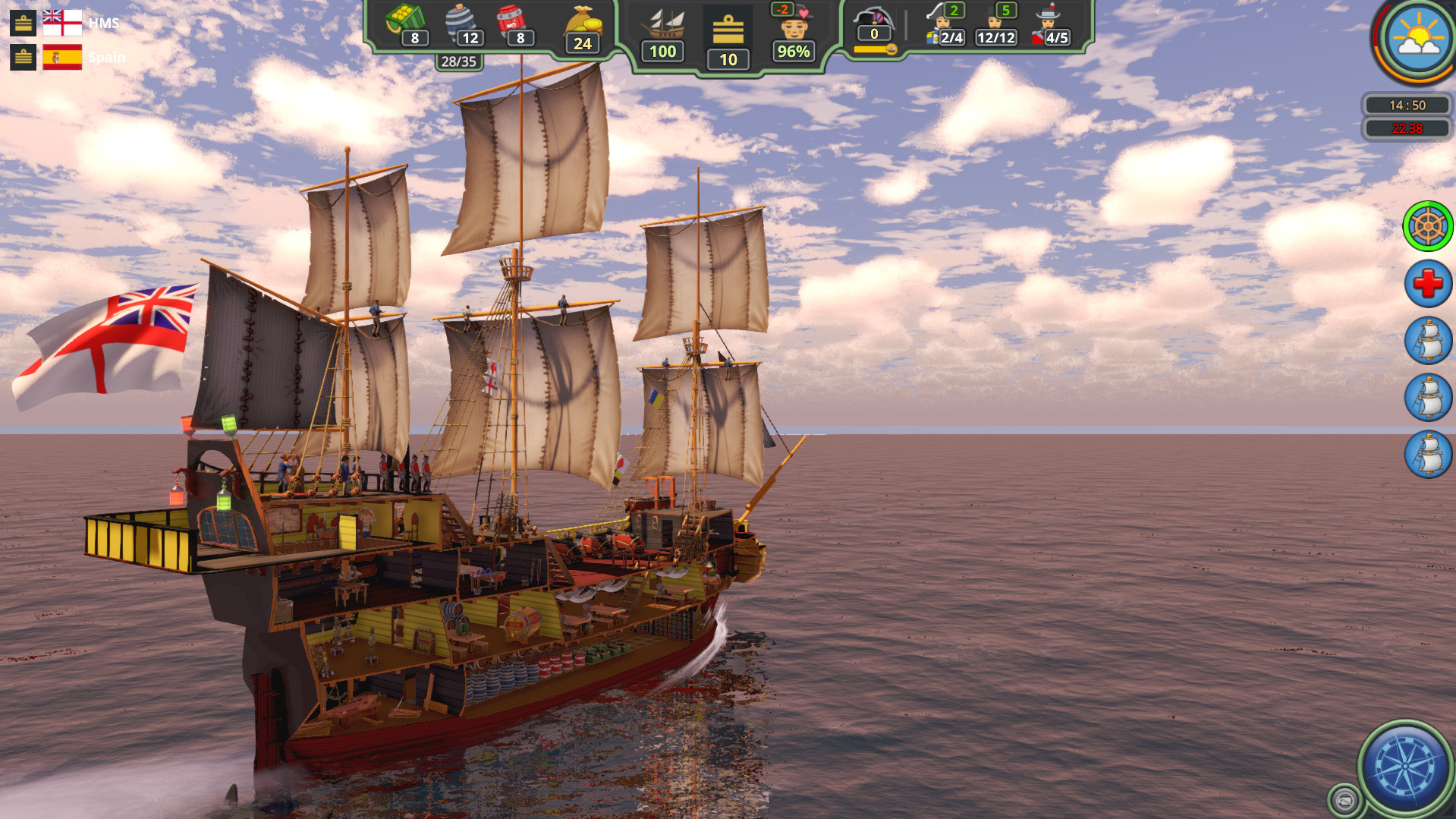 Her Majesty’s Ship won’t win any awards for photo realism, but the slightly low-poly cartoonish look fits the game a lot better than I would have thought. Each room of the ship (down to individual pieces of furniture) is unique, which shows a lot of attention to detail.

It’s too bad that the visuals you see at the beginning of the game are the same you’ll see all the way through. It would have been nice to see differences in rooms and layouts on different ships, or the option to upgrade rooms on the same ship. 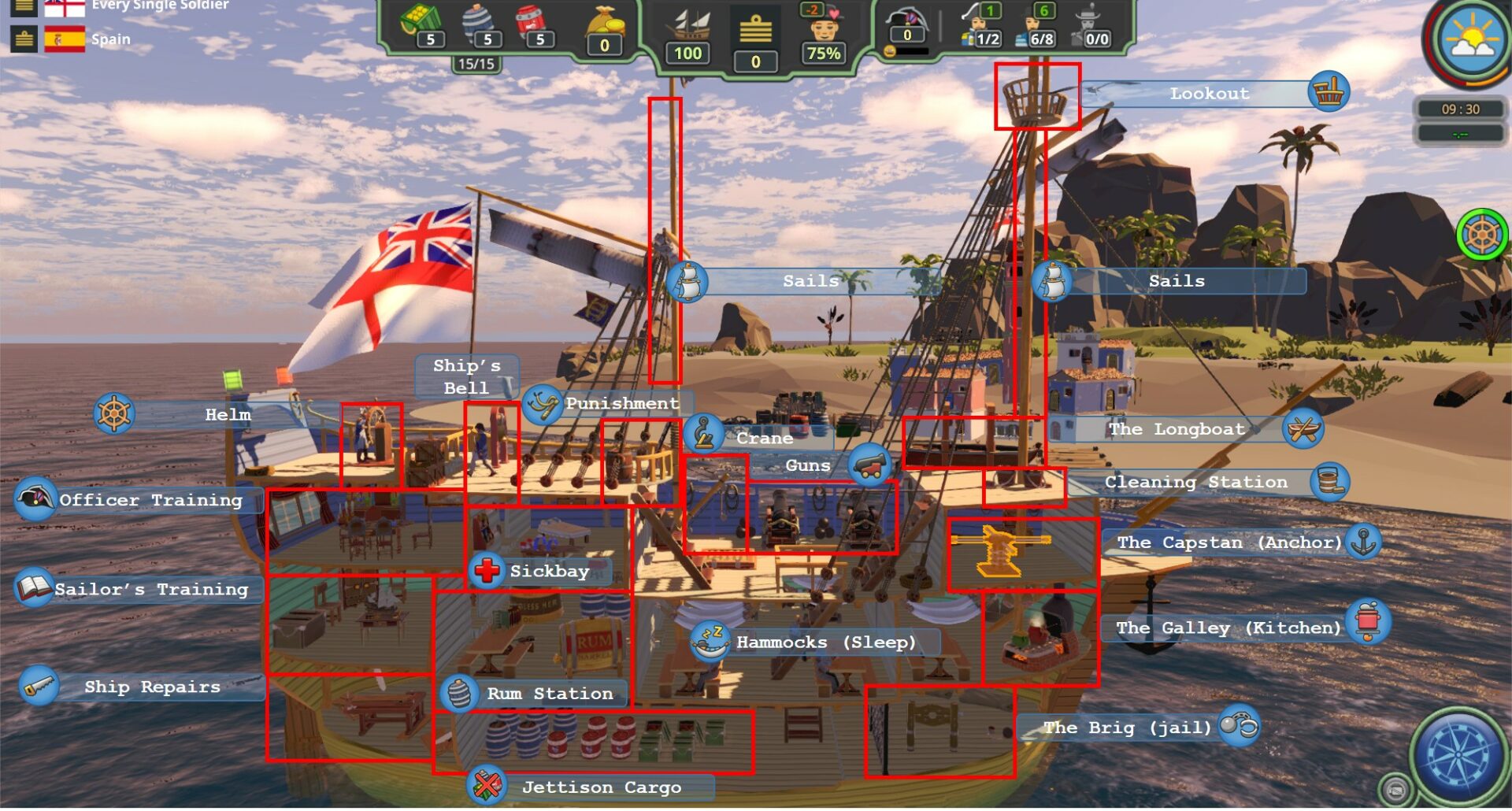 The sound effects are varied, crisp, and feel appropriate for each action. This is particularly true during combat when you can practically feel the roar of cannon fire (from both sides) and the wood-splintering crashes against the hull as your ship takes damage.

The music is relatively nondescript. While it’s there in the background and increases in volume during certain scenes (such as winning or losing), the music never overpowers the sound effects. This was a good decision in my view. In-game music usually annoys me, but here it was tolerable. 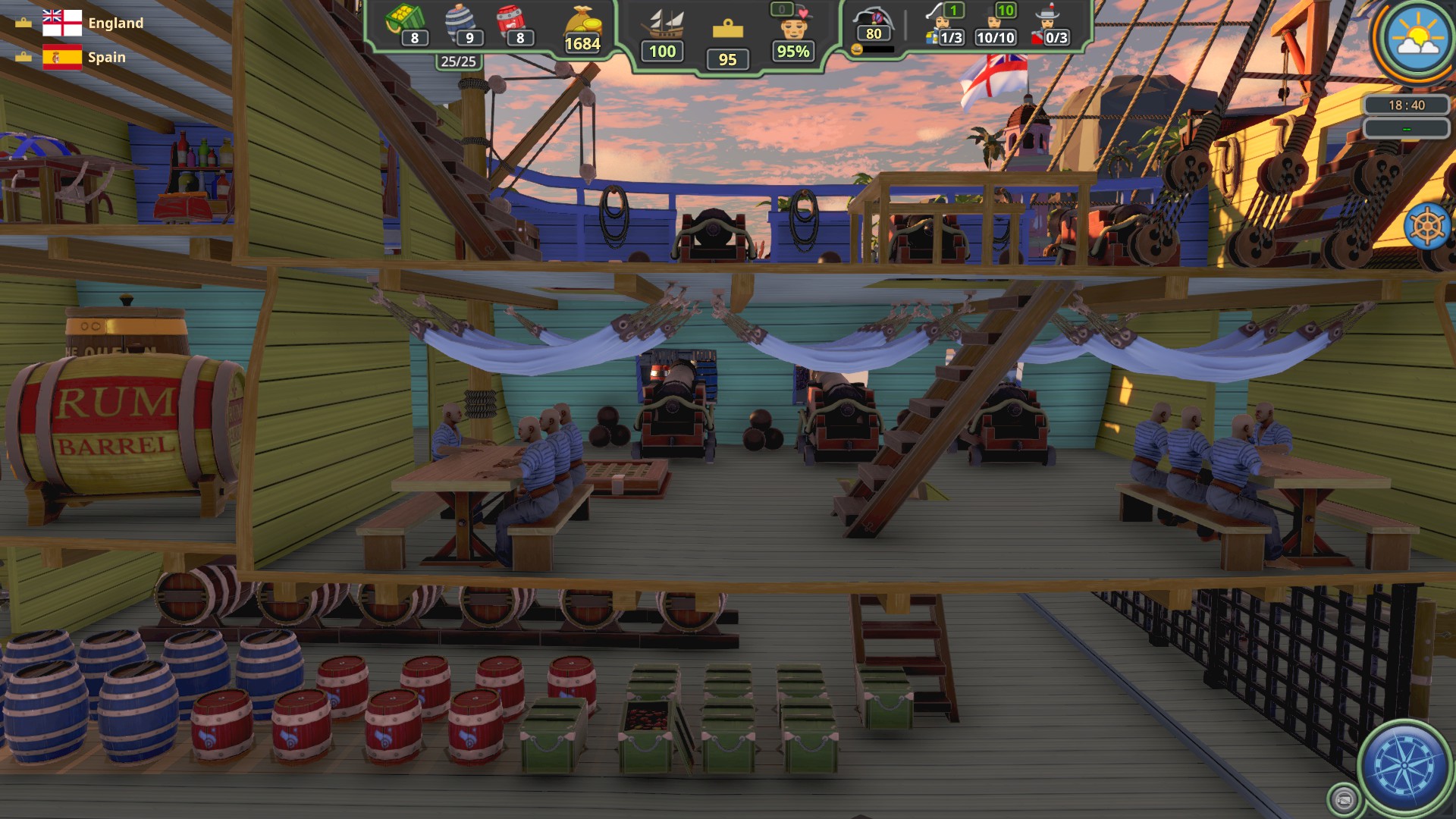 The idea behind the game is that you fight for one of four nations — England, France, Portugal, or Spain — while avoiding pissing off the Dutch and fending off pirates (no, you can’t be a pirate). What happens if the Dutch mark you as an enemy? They send The Flying Dutchman after you. She’s a nearly undefeatable ship that’s solely focused on sinking your vessel.

During the game you’ll rise in rank (potentially going from Captain to Admiral of the Fleet), which grants you access to better ships. This in turn permits you to hire more sailors, create more officers, and carry more cargo. Believe me, all of these are extremely important. 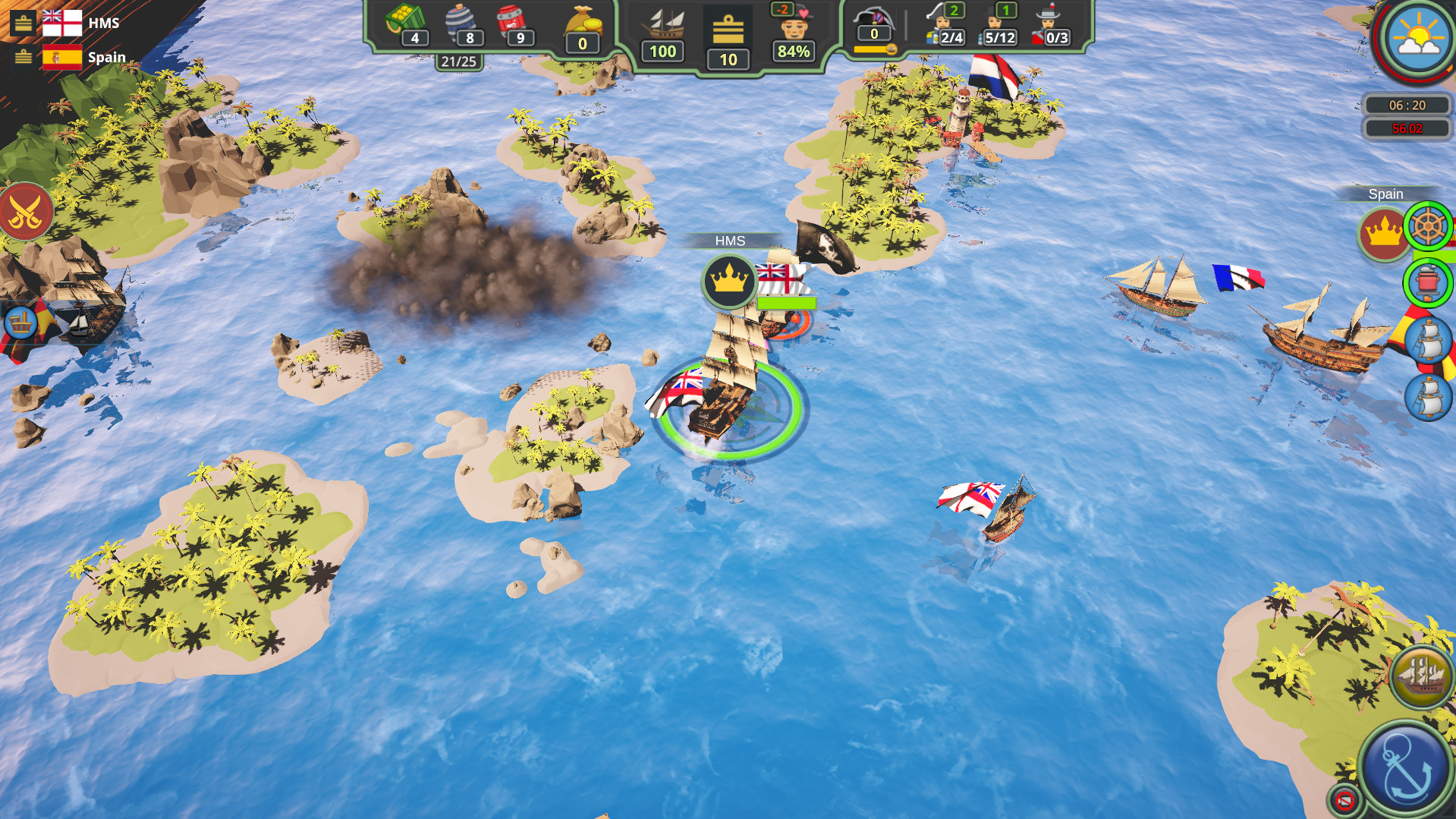 More sailors mean you can have the crew perform more actions at once. Early on, you can’t even have every cannon manned during combat, let alone expect to have the crew unfurl the sails, wash the deck, treat an injured crew-mate, and repair the ship’s hull all at once.

Maybe that sounds like a lot, but you’ll need to do all of that as quickly as possible. In addition, sailors can be promoted to officers or trained as marines, the latter of which are vital for capturing outposts or boarding enemy ships.

Officers can eventually be promoted to the rank of Commander and receive their own ship to command. They and their crew can sail alongside you or be sent off on separate missions. How many extra ships join your squadron depend on your character’s rank.

Probably the single most important reason to get promoted and gain better ships is the increased cargo space. All you ever carry is food, rum, and gunpowder. Larger portions of food mean higher morale. Rum is a quick “pick-me-up” for sailors and, although not as necessary as food, it’s an important requirement for some mandatory celebratory events. Finally, without gunpowder you can’t fire your cannons, and that leaves you unable to attack enemy ships or defend yourself. 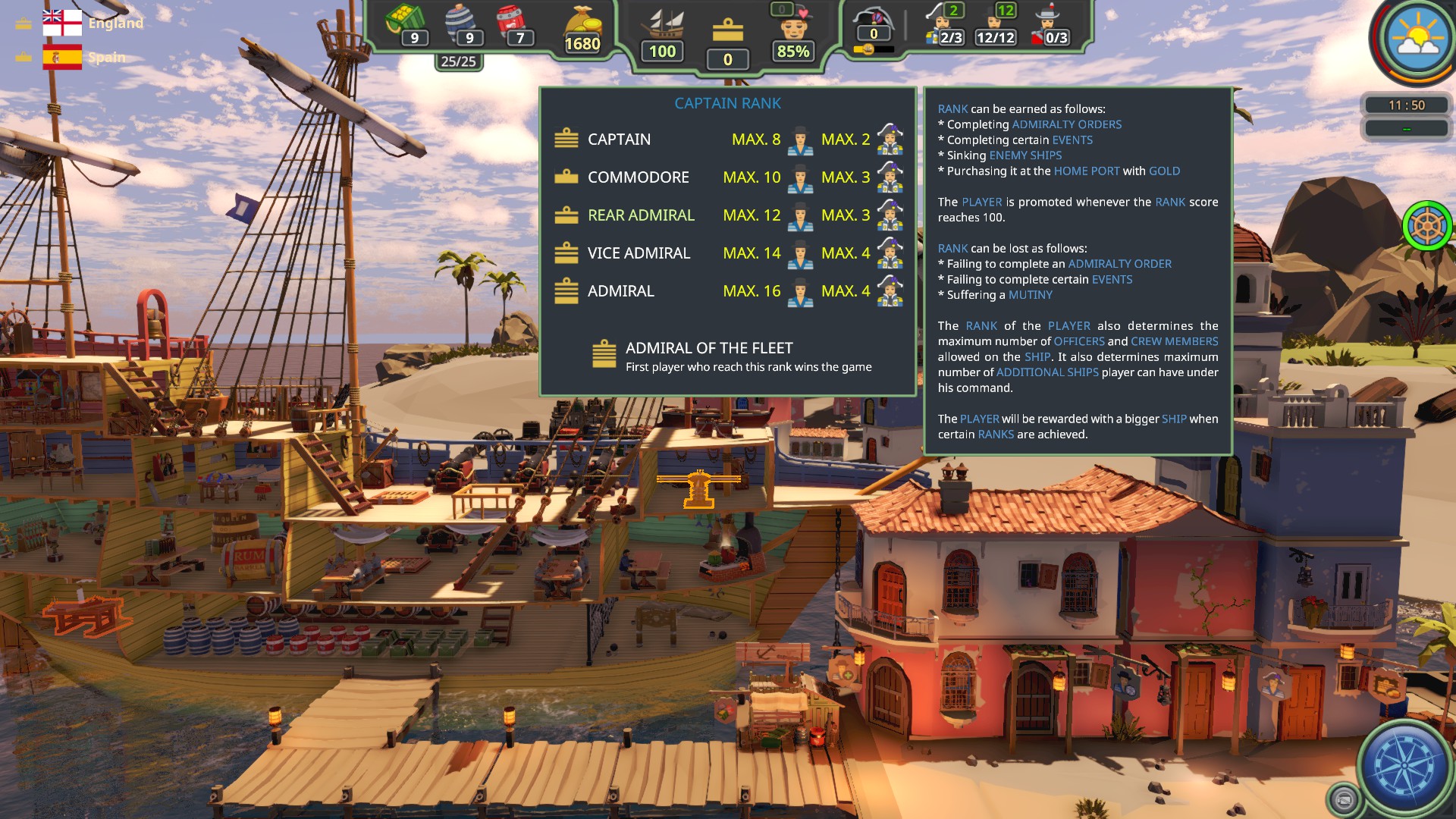 Gold is the currency of the day, and you’ll need lots of it. Sometimes you can find food, rum, and gunpowder on islands or shipwrecks, but more often than not, you’ll have to dock at an outpost and purchase them. You’ll also need gold to hire new sailors and put money towards promotions.

Morale is the most difficult thing to manage in Her Majesty’s Ship. Unless you’ve doubled your crew’s rations or you’re docked, morale constantly decreases at a variable rate, based on the what orders you give the crew. If morale drops to zero, your crew will mutiny, which results in the loss of your ship and a massive loss of promotion points.

Time of day is another complication, as your crew wants to sleep at nighttime. No ship can operate effectively if everyone is asleep, so crew lose morale at an accelerated rate at night. Time never pauses either, which is something I really dislike. The developer is supposedly looking into a “tactical pause” option, but there’s no indication of when that may occur, so don’t assume it’ll get added later on. 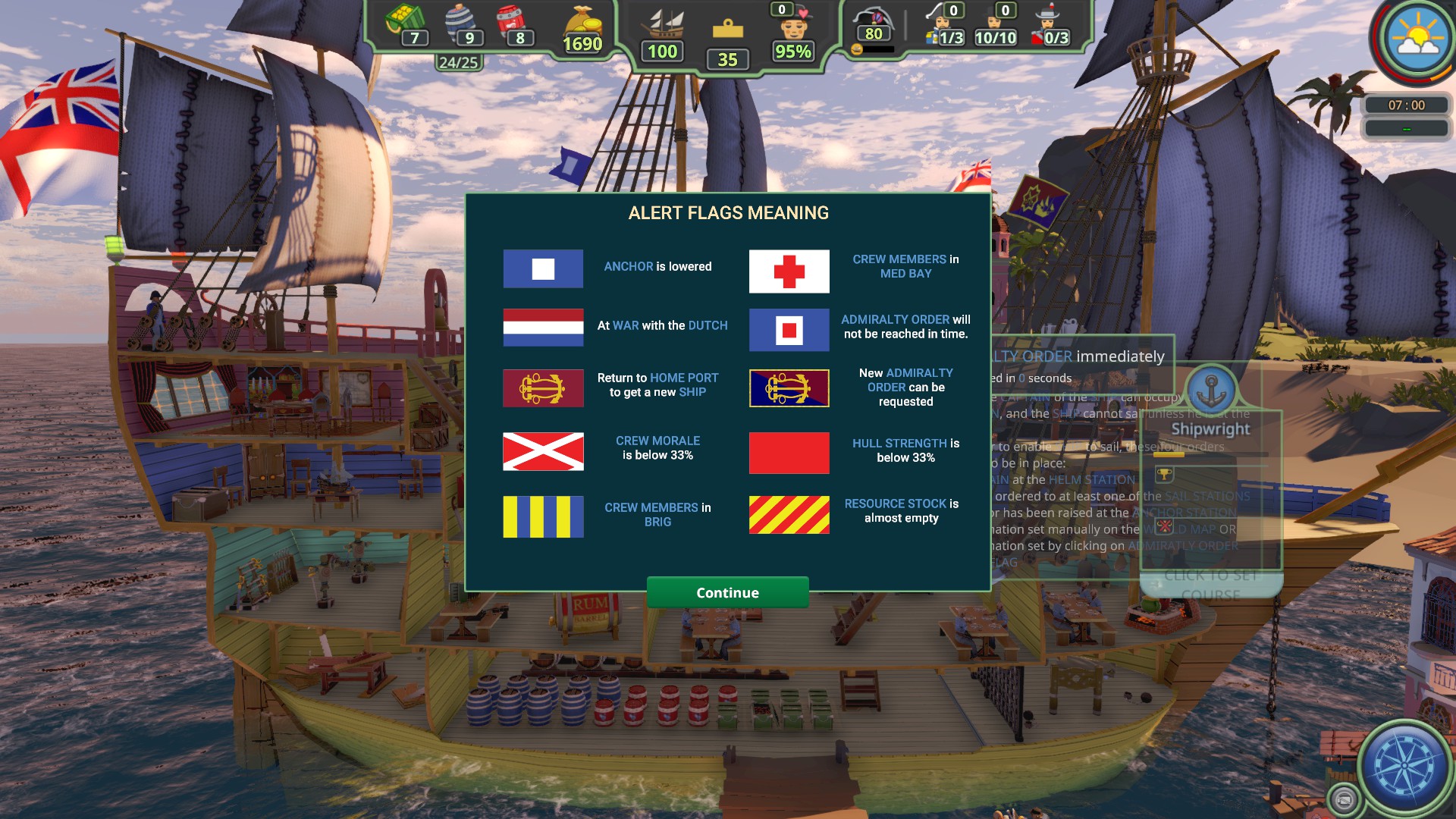 During the game you’ll receive notices in the form of differently colored flags on the aft mast that confer rewards if completed. Most of these tasks are simple to do, such as flogging an unruly sailor, swabbing the deck, or test firing one of the cannons. I wish I could have turned the notices off, though. Half the time I felt like I was doing nothing but busy work instead of actually playing a game.

When you receive a task from the admiralty, you don’t have the option to ignore it. You either take it or a task will be chosen for you anyway. These tasks are often complex and time consuming, but if you successfully complete the task, your reward is much greater than any other “normal” task.

Conversely, if you fail the task (which includes running out of time to finish it) the repercussions include a dramatic drop in morale and a reduction in promotion points. Sometimes you can even be demoted!

Her Majesty’s Ship also features online multiplayer, where you can face off against other players. I haven’t tried it, and if this game’s Steam boards are any indication, neither have most people. The problem is that multiplayer is “dead” as far as playing with random people is concerned.

There is none. Seriously, the story is “do such-and-such for your nation to win.” This wouldn’t be a bad thing if there was more to do in Her Majesty’s Ship, but there isn’t. By the time you’ve reached Rear Admiral (two grades above the starting rank of Captain) you’ve probably seen and done everything there is to see and do in this game. 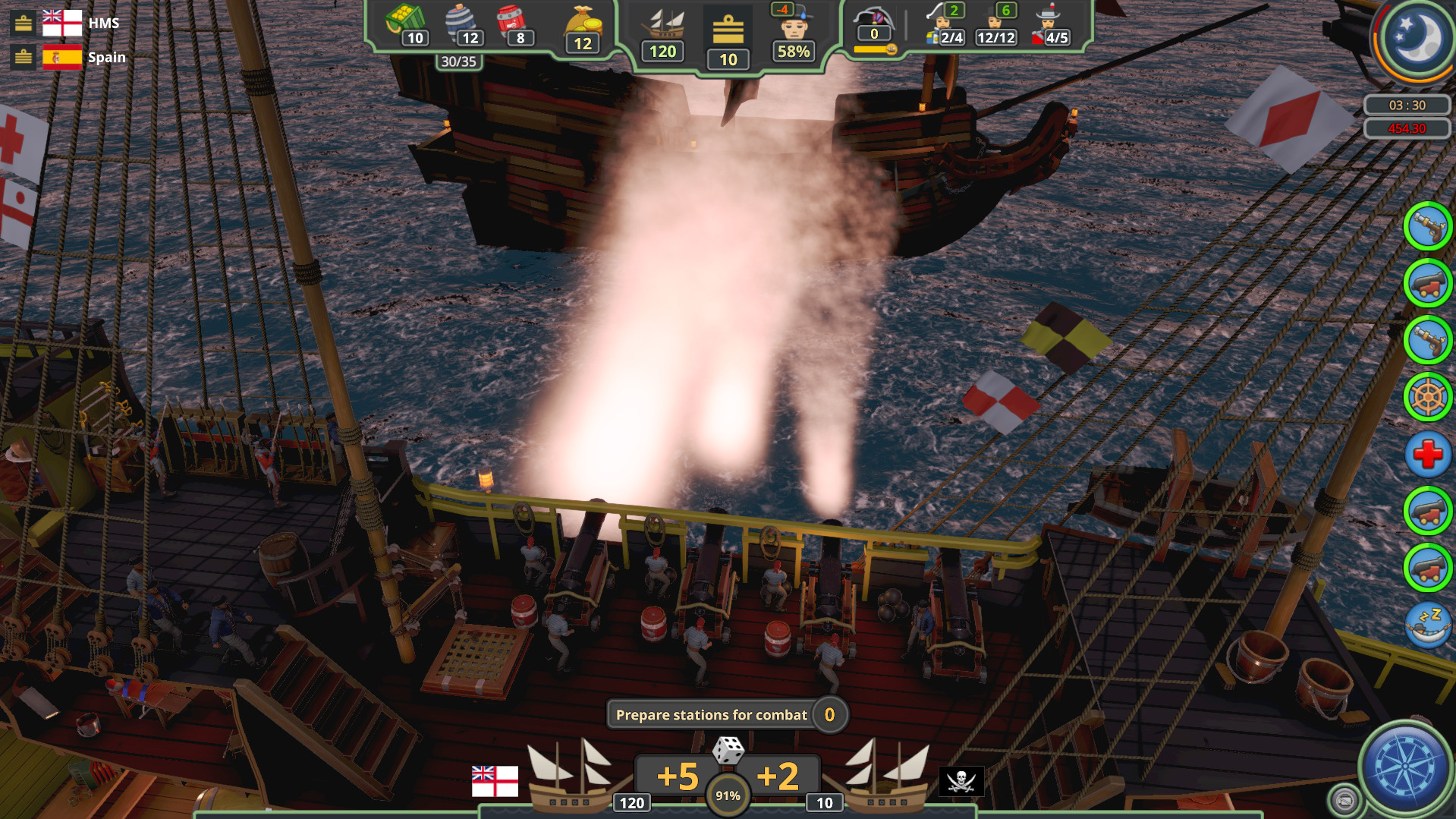 Her Majesty’s Ship is somewhat entertaining and amusing, but offers very little content. Despite first appearing as a management/simulation/exploration game, it shares more in common with the clicker genre, where gameplay is simplified to the point of clicking on hotspots as quickly as possible.

Her Majesty’s Ship lacks the realism and complexity of a simulation, the open world nature of an exploration game, and management is limited to deciding “who or what do I click on?”

Add in the complete lack of a story and nearly non-existent multiplayer, and you have a game that seems dead in the water for everyone except those desperate for any game set during the Age of Sail.

Even then, people with historical and military knowledge of this time period might shun Her Majesty’s Ship for its many glaring historical inaccuracies and over-simplification of commanding a ship.

To make matters worse, Her Majesty’s Ship is buggy. The first time I played through the tutorial the game messed up when loading an event, and I couldn’t continue. It turned out this bug was fairly common and had occurred for other people. The developer supposedly fixed it, but it happened to me after the developer claimed it was fixed.

At least Her Majesty’s Ship has tons of auto-saves and lets the player manually save their game when and where they want. That’s a classic PC gaming feature going back to the early 80s that shows respect for the player’s time.

Unless the developer makes some major changes, the best I can do is give Her Majesty’s Ship a “Pause” rating. Her Majesty’s Ship isn’t a bad game in theory, but in practice it needs a lot of work. Unfortunately, the lackluster combination of no story, little interaction beyond rapidly clicking, bugs, and nearly no replay value hurt what might otherwise be a great game for fans of the time period and naval warfare. 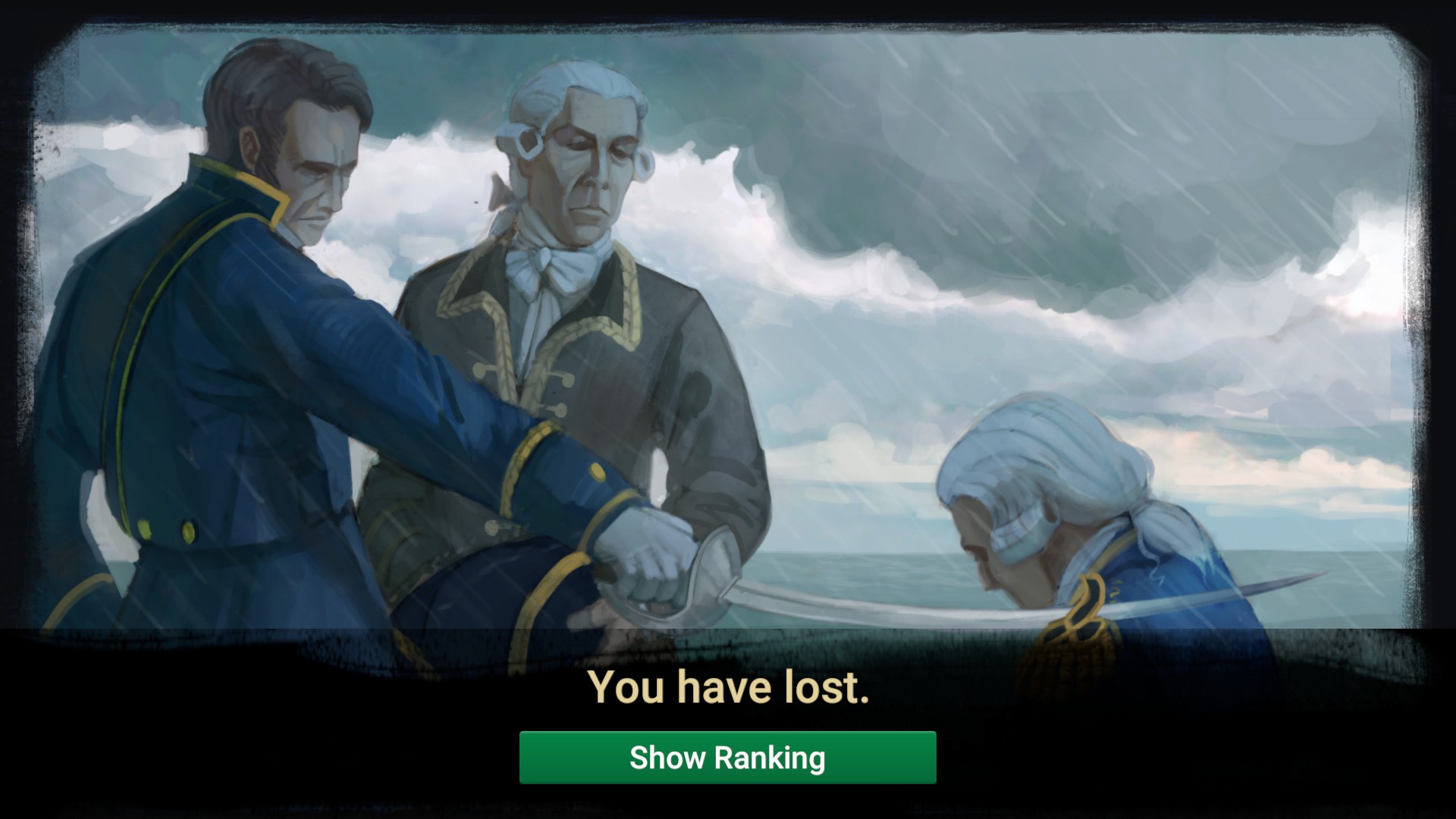