Infinity: Battlescape is a space combat sim where players can join massive battles, spanning across an entire solar system, by pilot a plethora of ships, spanning from the small interceptors to giant carriers.

The description on the Steam page says: “Participate in space and planetary battles of massive proportions like those seen in movies such as Star Wars, Battlestar Galactica, and Serenity.” Initially, I was rather skeptical, as space battles tend to be rather boring due to the emptiness of the space, or incredibly confusing due to the number of elements some games throw in the mix. Infinity: Battlescape manages instead to keep the battles interesting but confined to their environments in a very natural way, without coming down to solutions like small, artificially-limited battlefields, while also keeping a true-to-size solar system. But let’s go through everything with order, because there’s a lot to talk about. 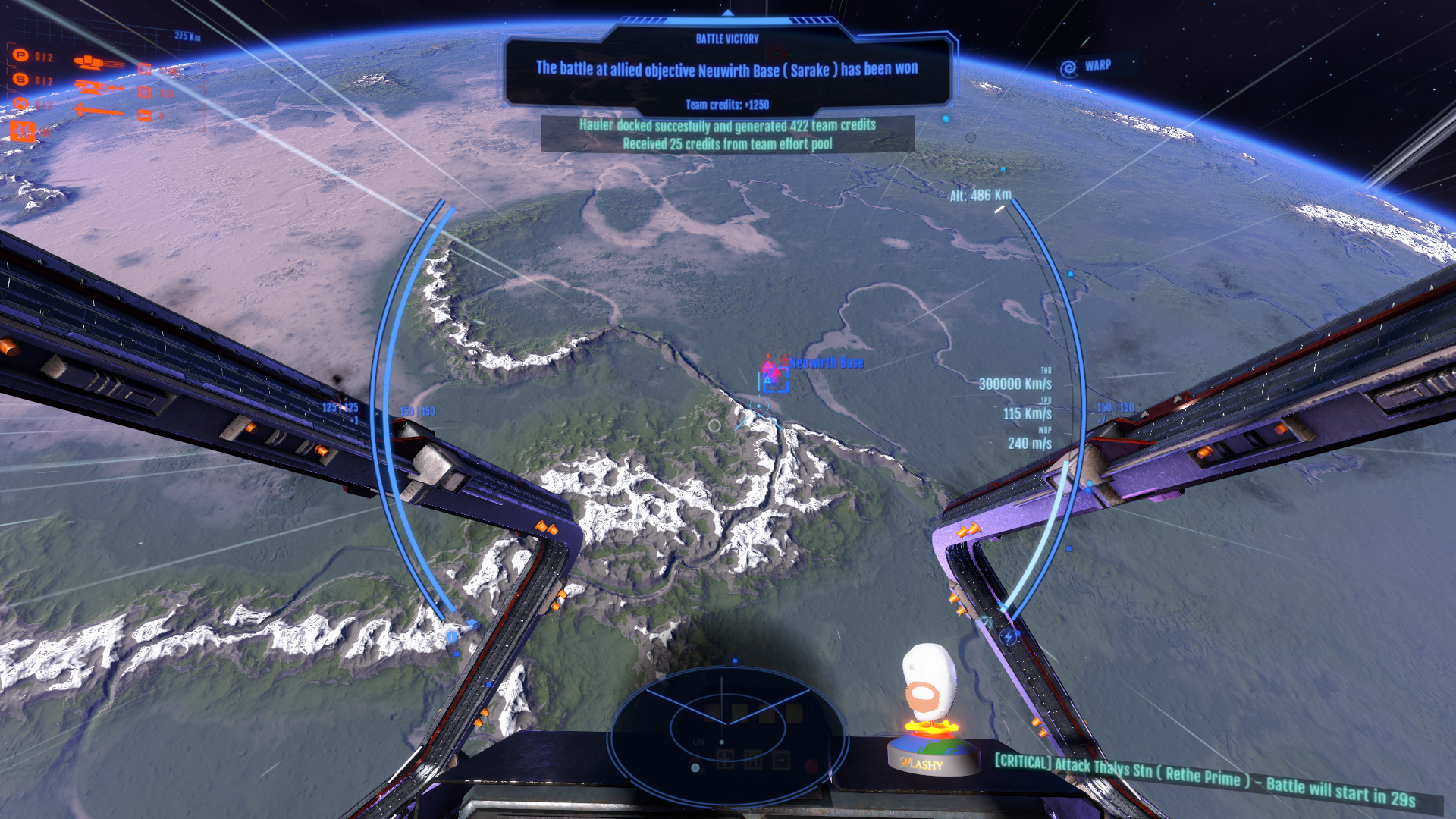 Please save my station

In Infinity: Battlescape two big corporations fight over each other for the control of the resources. Refineries, factories and space stations are only some of the strategic locations that the players will fight for. The game works through a series of missions, issued by the faction AI, that the players can join. These missions are useful to understand where the action is and where the help of the player is most sought. The completion of such missions rewards the faction with credits and in some cases new strategic locations (in case of attack missions), like space stations or ground factories. It is also possible to attack and destroy enemy convoys to deny them additional incomes.

Owning strategic locations is vital for the course of the battle, since they generate credits for the faction and, in the case of space stations, let the players respawn or repair and restock their ships. Also, the loss of all space stations of a faction means game over: this actually takes from hours to entire days to achieve, depending on the balancing of the two teams. In fact, comparing this game to Planetside would be a fast way to describe it. 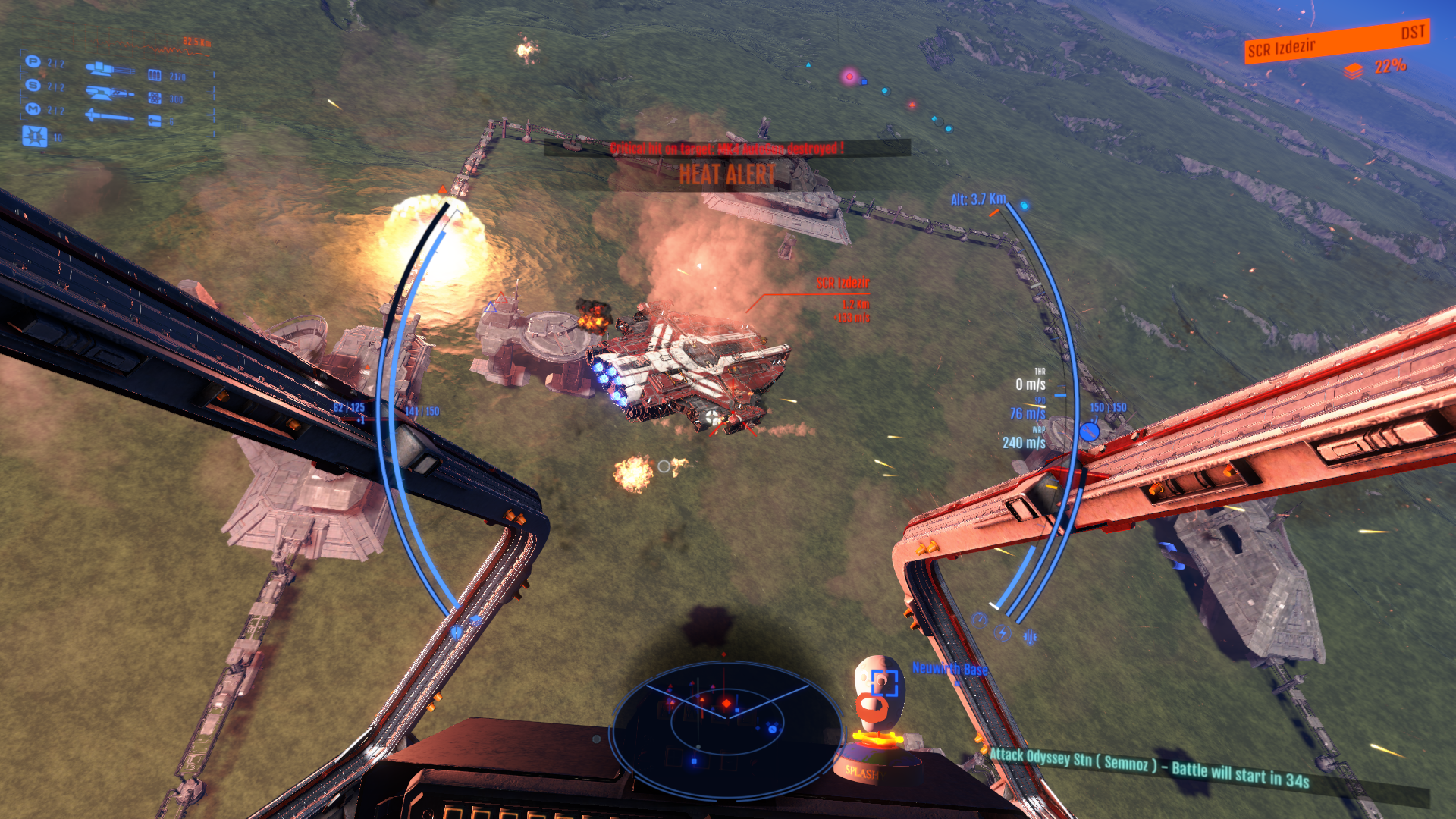 There are currently a moderate number of different ships implemented into the game: two small, one heavy and three capital-sized. While this doesn’t seem like a good-enough variety, it’s important to note that each type of ship covers a different role on the battlefield, ranging from small fighters to warp-interdiction corvettes and giant carriers.

Players will start each game with only the normal interdictor and eventually work they way up to the capital ships by taking down enemy ships and completing missions. Note that this doesn’t necessarily mean that buying a more expensive ship is the right choice, since no one is universally stronger than the other: the bomber, fox example, costs more than the interceptor, but the latter destroys it in a 1v1 fight.

Small ships are the easiest to begin with, as they are also the easiest to pilot: in this category we can find the interceptor and the bomber. The first one is the essential part of each army and it’s used to protect the bigger capital ships and discover enemy outposts. The bomber is, well, a bomber: it destroys the bigger ships and enemy structures. The heavier category we can find the corvette: it’s a support ship that, while capable of inflicting a good amount of damage, it’s able to repair and restock friendlies while also jamming warp drives. The largest ships include the destroyer, good for taking down smaller ships thanks to its flak turrets, the cruiser, the spearhead of the army, boasting terrible firepower and armor, and the carrier, able to act as a mobile spawn point for friendly small ships.

Infinity: Battlescape implements ship movement in an almost-perfect fashion. Every ship moves according to a Newtonian system that feels so much satisfying to play on. Forget Elite: Dangerous’ speed limits and strange spaceship handling, flying here is all about understanding how speed and thrust vectors work. This makes for a flying system that is very skill-dependent, especially when the flight assist system gets turned off, and lets you also make some incredible tricks. This is particularly true when speaking of the ‘smaller’ ships: when it comes to destroyers and carriers instead, additional rules apply. Bringing one of those huge ships in a planetary battle is not always the best idea, for example, since the atmosphere tends to make the thrusting system less effective the more the ship gets near to the surface, making fights less about shooting things and more about not crashing to the ground. 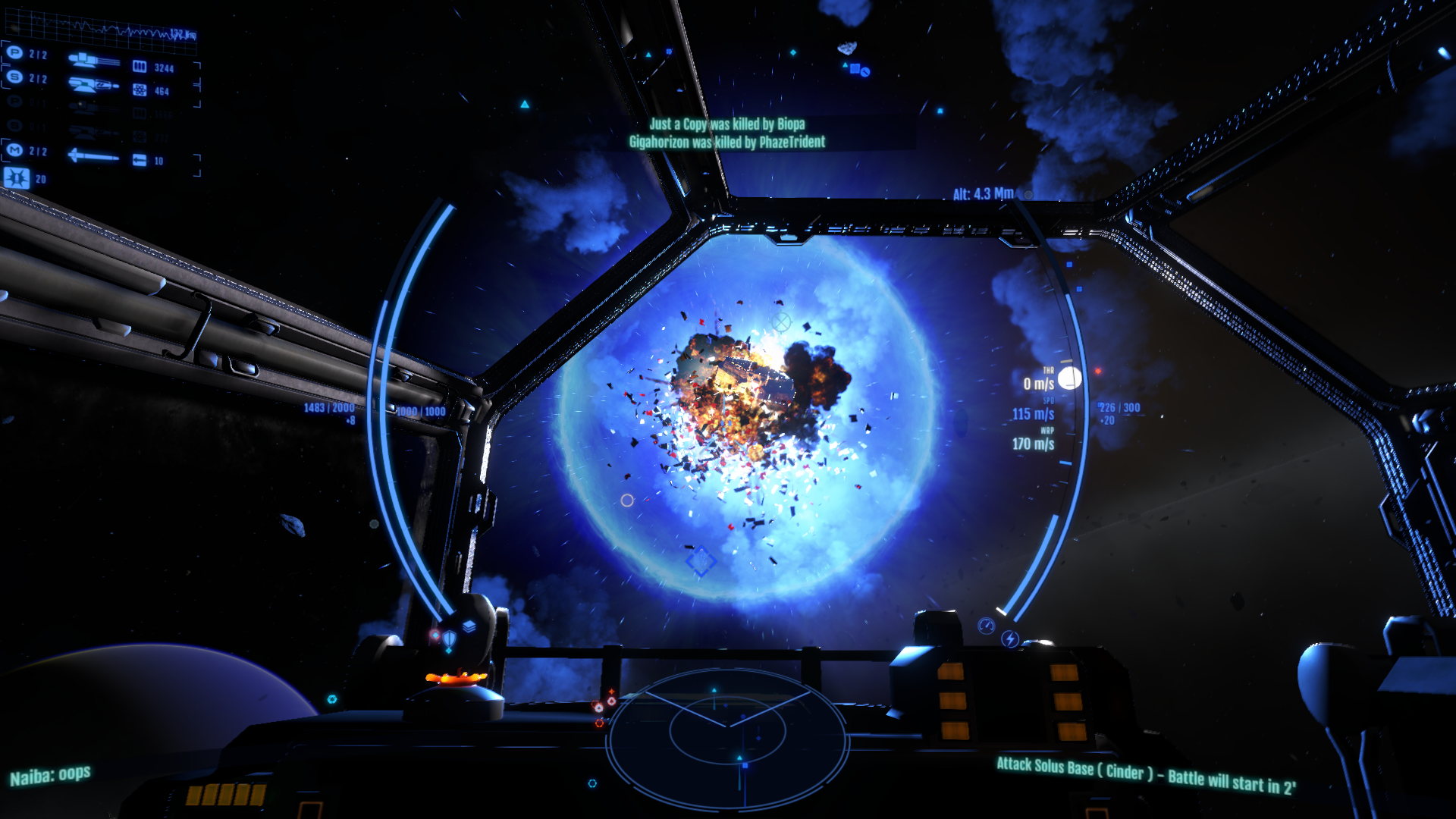 When not flying around mid-battle, then the player is usually traversing the space at warp-speed. Warp is the only system that allows fast interplanetary travel and works very much like that of other space sims: it’s mostly automatic, you just face where you want to go and it sets the speed according to the gravity well of near objects like planets or stations.

One of the most surprising aspects of Infinity: Battlescape is the graphical compartment. Besides the fact that battles have that intense Star Wars vibe, it is incredible how Infinity: Battlescape manages to have a true-to-scale solar system without introducing any sort of loading screen during the game. That’s right, entering the atmosphere of a planet or activating warp travel is incredibly natural, without any strange, poorly-hidden loading screen (not pointing the finger at you, Elite: Dangerous, definitely not).

Graphics are overall very pretty, besides some low-quality textures that are acceptable in an Early Access game, and often leave the player admiring giant explosions of capital ships and beautiful planets vistas.

A short note on VR and joystick support

While VR Headsets are not officially supported (yet), some players are already blowing ships up using theirs. Regarding joysticks/HOTAS, there’s a large number of them already supported.

The devs have already prepared a roadmap of features and fixes on the game’s Steam forum. Here we can find some much-needed changes planned, like a hud and star map remake, sub-system targeting and new weapons. In the longer term it’s possible to find electronic warfare, new planets, a squad system, orbital bombardments and much more.
Servers currently support “only” 300 concurrent players (500 for the final release), with bots to fill the empty seats. The game is almost a warranty since the devs have been working on this project for years, making its abandonment highly unlikely. 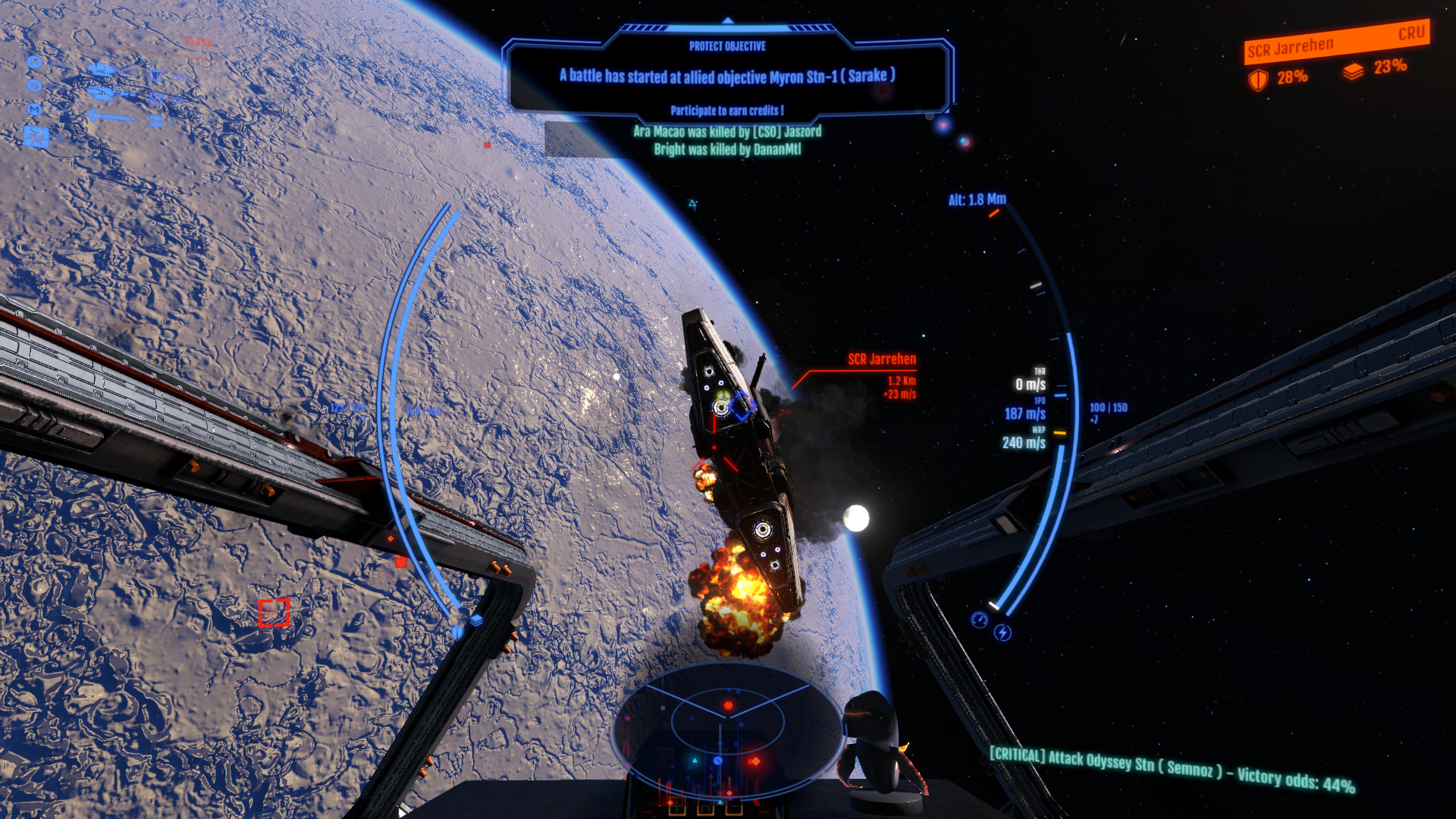 Infinity: Battlescape is one of the Early Access games I most look forward to. With this team of devs, supporting and continuously adding content and patching the game, I have no doubt that this will become one of the best space simulators on the market. While the price might look like a little on the higher side, especially for an Early Access game, the quality of the game and the amount of hours one can sink into the game make for an easy recommendation.