A terrifying world full of supernatural evils awaits you, but at least you’re getting paid for it.

An interesting and unique action-RPG, HellSign puts you into the role of a paranormal investigator in a world full of horrors. Each contract that you take earns you money that you can spend to purchase new equipment and experience that allows you to learn new skills as your career evolves from simply being an investigative scout to a full-fledged hunter of the supernatural.

Switch On Your EMF Meter And Get To Work

The first step of your career is to create your character. You’ll name them and choose a portrait, though you can currently only play as a male and even then there are only four portraits to choose from. Selecting your class is slightly more exciting as there are nine of them available and these range from detective to mercenary to ninja. Although each of these classes shares the same four skill trees, your choice determines which skills you start the game with as well as your equipment loadout. These offered customization choices immediately and I was impressed by the number of classes considering the stage of Early Access that the game is in.

Once your character has been created, your first task is to scout a house for a pair of hunters that have hired you. As a scout, it is your job to enter and explore the location, gather evidence of supernatural activity (collectively referred to as signs), and identify which type of entity is haunting the area. Upon completion, you pass the information off to the hunters and head off into the world, keeping the signs that you found to sell or use in crafting as you wish. This completes your tutorial mission.

At this point, you are introduced to a map that includes your safe house, a bar, and “Guns n Baits,” an arms dealer. Your safe house is where the majority of your organizational work is carried out between contracts; crafting, choosing your equipment, and researching your foes. The bar is where the social side of the game takes place and it is the primary location that you use to speak with other characters and move forward on the main storyline. Finally, “Guns n Baits” is the location that you visit not only to acquire the tools that you need to investigate, such as EMF meters, microphones, and flashlights, but firearms, traps, and armor as well. Once you’ve made the necessary preparations, the map is where you’ll acquire the vast majority of your contracts. 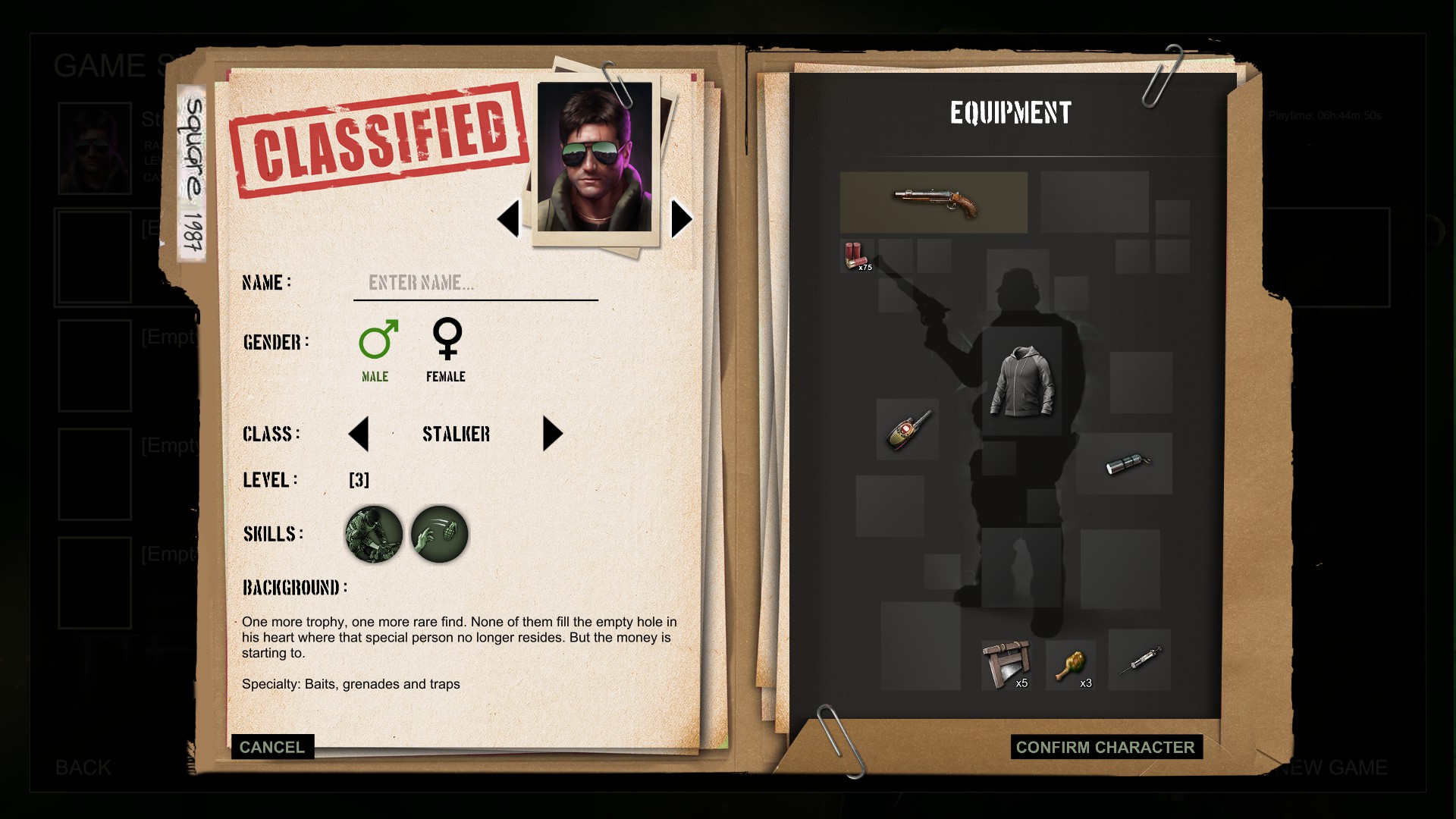 I Ain’t Afraid Of No Ghosts

The initial contracts that are available to you will most likely not push you to your limits. Scouting contracts and Forensics contracts are the only two available at your reputation level and the latter legitimately posed no threat to you whatsoever, they are the very definition of low-risk, low-reward. Scouting contracts offer at least a minor challenge as you will begin to see the dangers that haunt these places and both your investigative gear and your weaponry will certainly begin to see significant use.

Once you improve your reputation by getting a few of the story-based contracts under your belt, the game really picks up. Sweeping contracts are a departure from the earlier types as they do not require you to investigate or identify a greater supernatural entity within, they are simply extermination missions where you move from one room to the next clearing the area of any and all hostile entities within. These are followed by an additional higher-difficulty variant of the Scouting contracts from earlier and it quickly becomes very clear that these are meant for the true professionals as it became far more common that I would only complete a few of the tasks related to the contract before I made my escape in an act of self-preservation. Each new tier of difficulty offers new enemies and challenges and you’ll find yourself desperately scraping together funds so that you can buy more advanced forms of equipment to keep up. 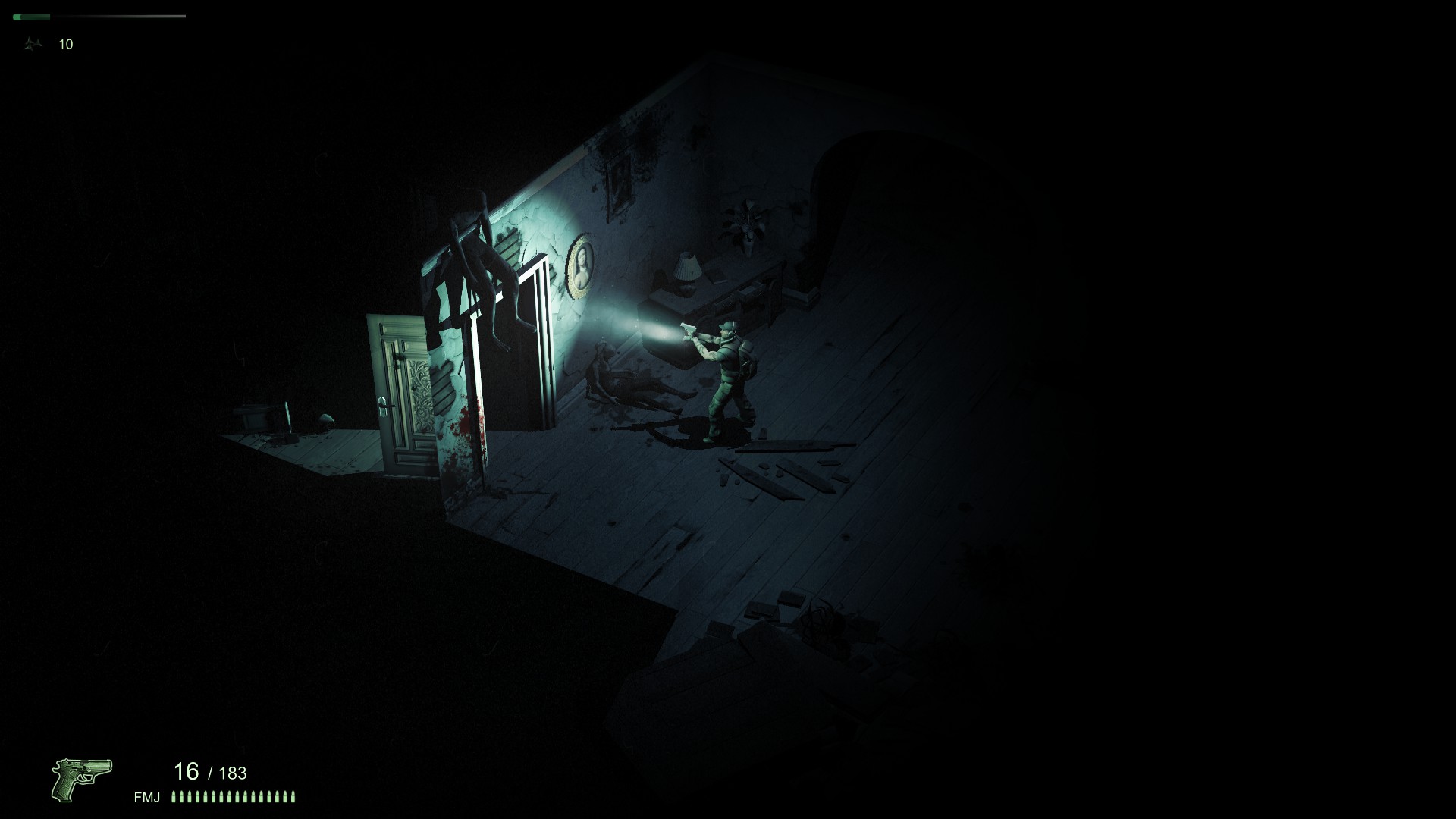 When I first started playing HellSign, I was immediately impressed by the level of RPG elements that were present. The skill trees have a great deal of versatility to them and your investigator has the potential to be very different from someone else’s. The equipment was interesting and as each type of equipment had a superior variant made available, I always found myself excited to get my hands on them, particularly early on when a new weapon could offer twice the damage output that the currently equipped one was dishing out or an investigative tool could resist the interference that made those of inferior quality useless. The balance between maintaining the atmosphere of a horror game while adding in RPG elements and action-based gunplay is a very thin one to walk, but HellSign manages to do so magnificently.

The overall design of the game was also something that I enjoyed. Contracts that you take do not need to be completed to profit from them, there are even times when taking a contract to quickly pop into the location, grab the first sign that you can find, and escape is very profitable and can help you get enough funding to acquire the gear that could allow you to perform more adequately on them. You’ll constantly find yourself wondering if you should attempt to explore a little more for more profit or call it a day and escape with what you’ve acquired. Each successful task also gave me that “one more contract” feeling that I would not have expected to find in a horror-based game, and the “grind” is already enjoyable and has me excited to watch as additional features are developed.

The graphics are not mind-blowing by any means but they do the part and facilitate the atmosphere well enough that I enjoy them and never felt that they needed to be improved any further to maintain the experience. The audio, on the other hand, is fantastic and the music and sound in the game not only aided in maintaining the atmosphere but genuinely added to the overall enjoyment of the game. 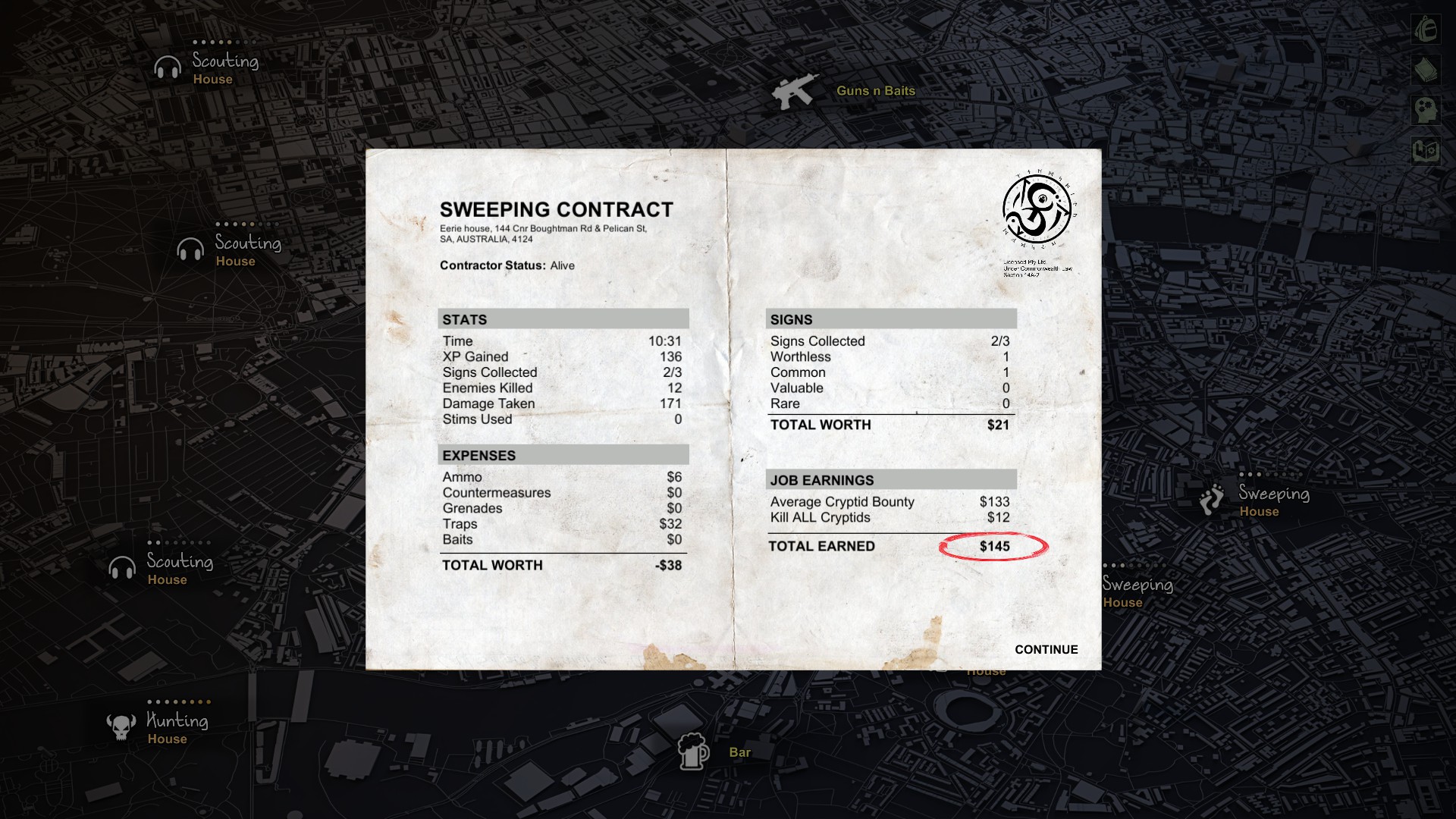 What Can Be Improved?

Although what is already in the game is surprisingly fun, it takes only a few moments of playing to realize that it is still deep in Early Access. Each contract is for a procedurally generated location and each of these locations uses the same collection of assets; the layouts and contents of each house may change but the aesthetic of the houses themselves never do. I would like to see the number of environment assets available drastically increased as well as additional floors in some locations to make each feel very different from the next.

As for the grind, it’s certainly got a solid footing going for it already. I have very few complaints or suggestions to improve the equipment but where the real issue here comes in is the character development; the skill trees are incomplete. At the time of this review, not only some but most of the skills on it are locked. This was particularly unfortunate in my playthrough as I chose the ninja class and I was unable to upgrade any of my starting moves to the next tier. This certainly doesn’t make the game in its current state unplayable, but it does significantly restrict the options to build your character as you end up being more of a jack-of-all-trades, master of none.

Finally, the dialogue and other text in the game has some issues that break immersion. It’s clear that much of it hasn’t been reviewed yet as there are a number of punctuation errors that could be fixed and the dialogue between your character and others often seems awkward and forced as well. However, the entries in your Cryptonomicon are well-written and I’m optimistic that the rest of the game will be brought up to this level of quality. The actual writing behind this is also promising, the characters and atmosphere have something of a Shadowrun feel to them and I enjoyed them even if the actual text on the screen didn’t receive the same amount of love. The text of the actual contracts is also off, though not quite as much in the way of being an affront to the English language, but more so in regard to the fact that every contract of a type has the same introduction text when you are selecting them on the map. 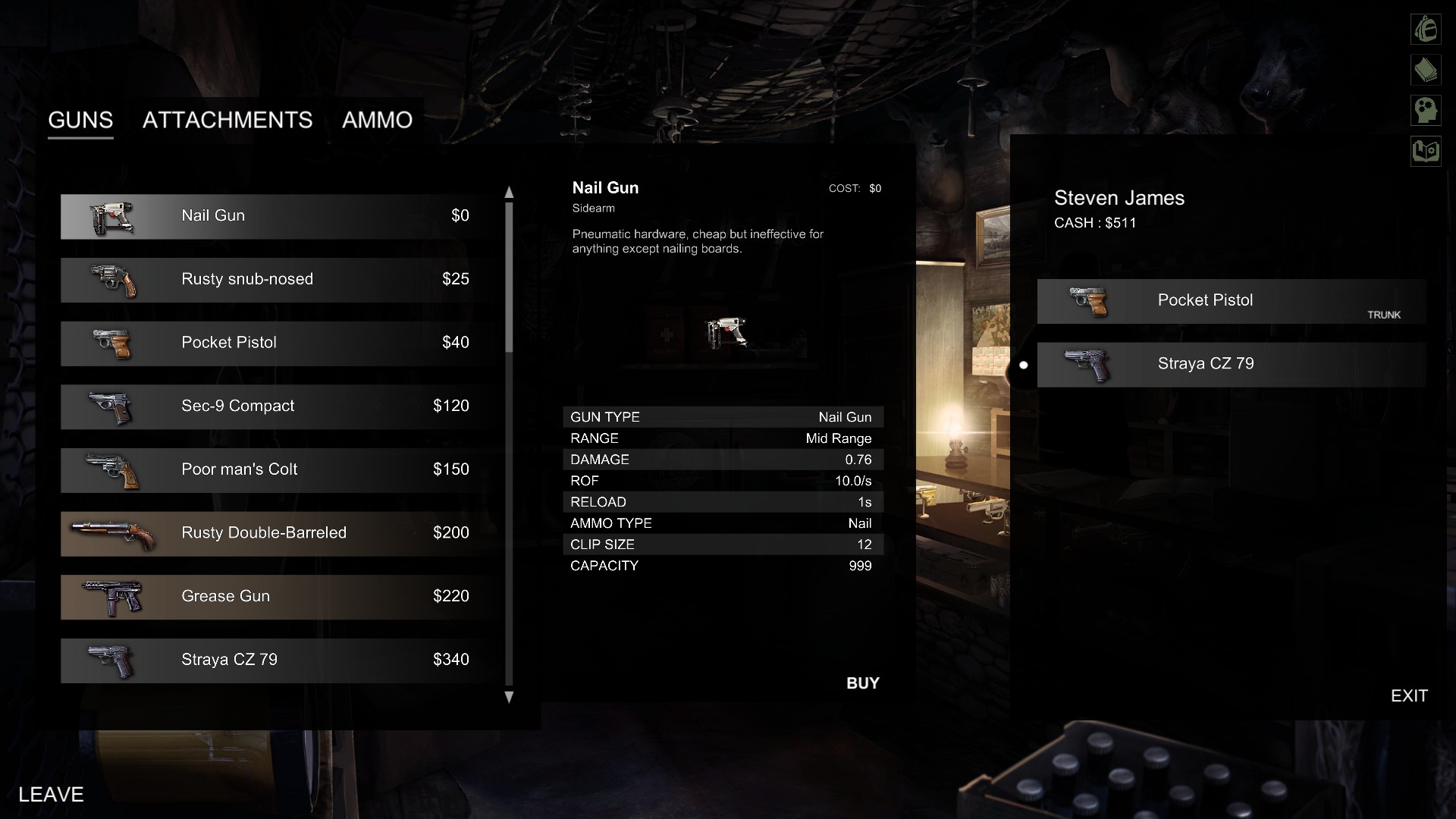 I won’t pull any punches here. HellSign is already an incredibly entertaining game even with it having quite a distance to go before it reaches its true potential. There’s no question in my mind that it will be a true gem of a game if Ballistic Interactive stays devoted and is willing to put everything they have into getting it there. As of now, I would recommend it to those who want to support the developer and to those who might have been at least somewhat convinced of how fun it already is by this review and others like it. After having put a number of hours into the game, I am now a fan of HellSign that is very excited about its future development but I would recommend letting it get a few more updates if you’re looking for a full game that won’t tease you with future possibilities that are not yet implemented.