No one kidnaps our boyfriends!

The beat ‘em up genre is one genre that I barely stick my hand into. I guess none of them really caught my eye lately and I never was interested in them as a kid (well except the Scott Pilgrim game, but I was late on that front) nor were any of my old friends. I do vaguely remember playing one in an arcade, but that’s it. I never really thought about beat ‘em ups unless someone else brought them up. However, once I saw the trailer of River City Girls it immediately caught my eye. Despite (obviously) not ever playing a River City title before, I just had to play River City Girls. 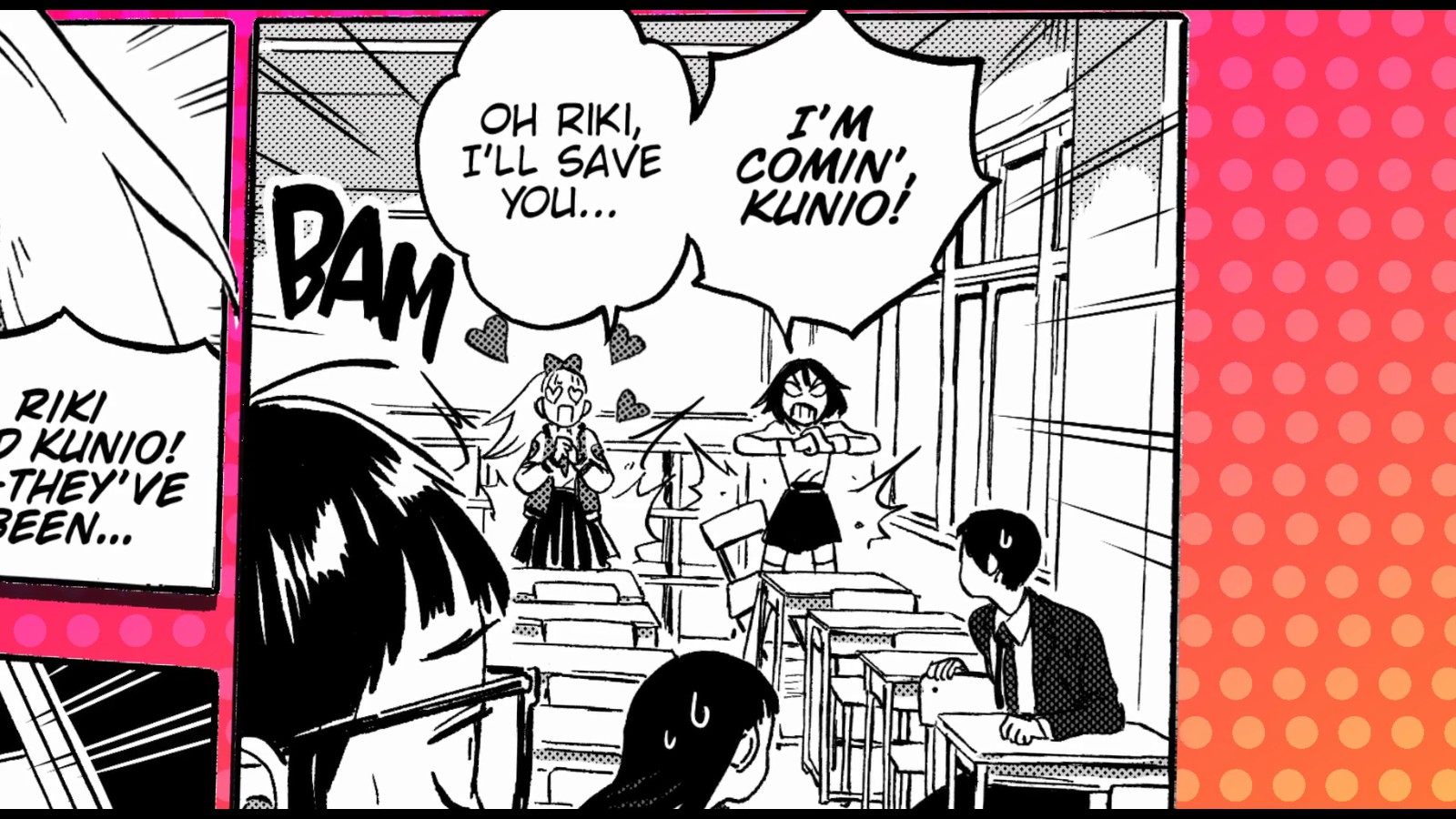 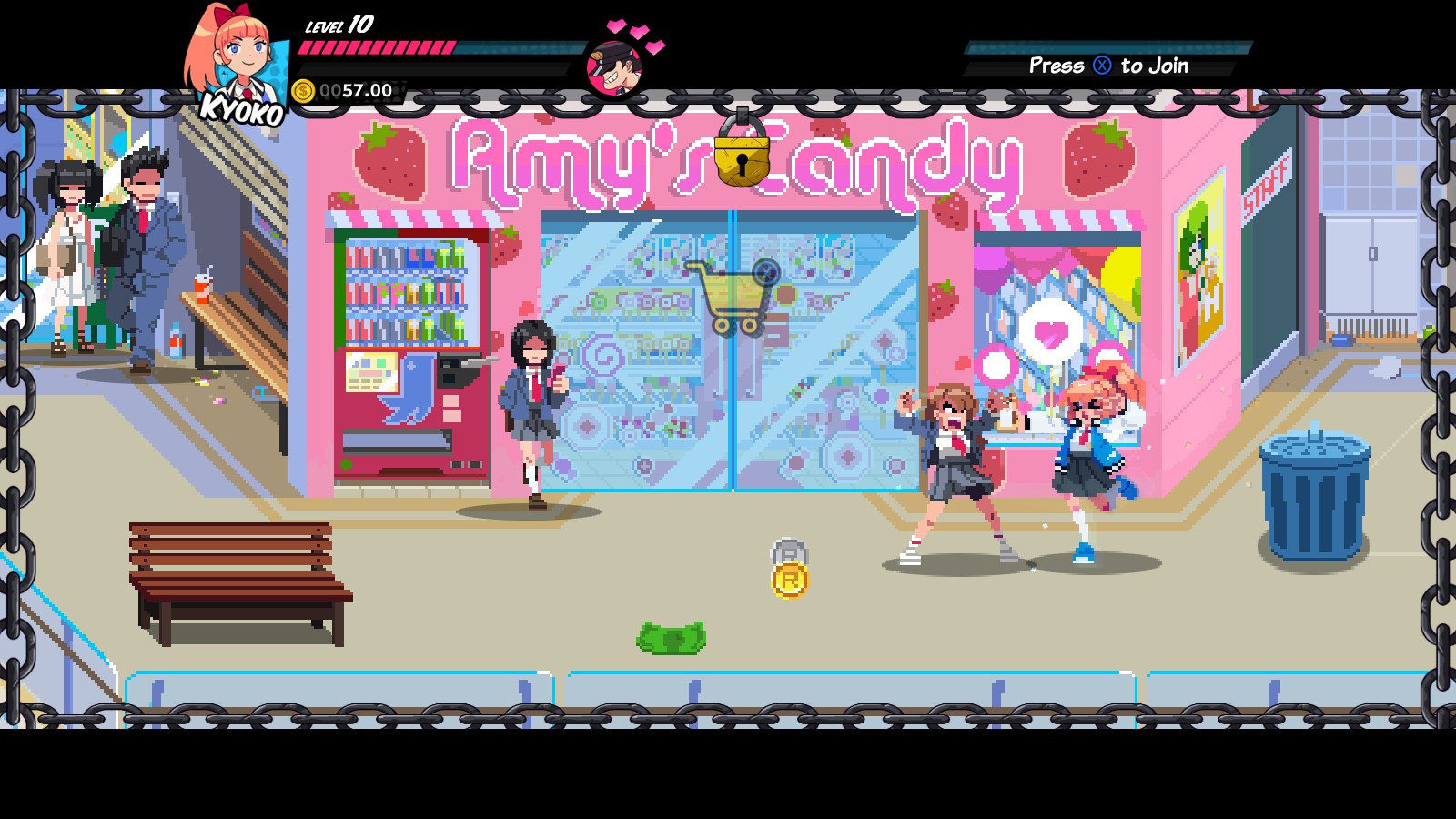 Since River City Girls have two playable characters, who should you choose to play? Well, you wouldn’t go wrong with either. Kyoko and Misako’s personality doesn’t just shine in conversations, but also in their fighting style. Kyoko is the bubbly one of the two with her fighting style revolves around being fast and implementing volleyball and cheerleader moves. While Misako is more hot-headed with her moves having a little bit more weight put behind them as she won’t hesitate to utilize her backpack or use some wrestling moves. Not to mention that there are a few small touches that differentiate Kyoko and Misako even more. When they parry Kyoko takes a selfie while Misako uses her backpack, their cute facial expressions are different in-between frames and when carrying heavy items, Kyoko has a cute phone case while Misako’s phone doesn’t and has a screen crack, and even their wallets are different.

Personally, I played as Kyoko the whole game and only switched to Misako after finishing the story. I was certain I would miss playing as Kyoko, but once I played more as Misako she quickly grew on me. Both Kyoko and Misako are equally fun to play as, even to the point where I honestly can’t decide which one is my favorite to play as. 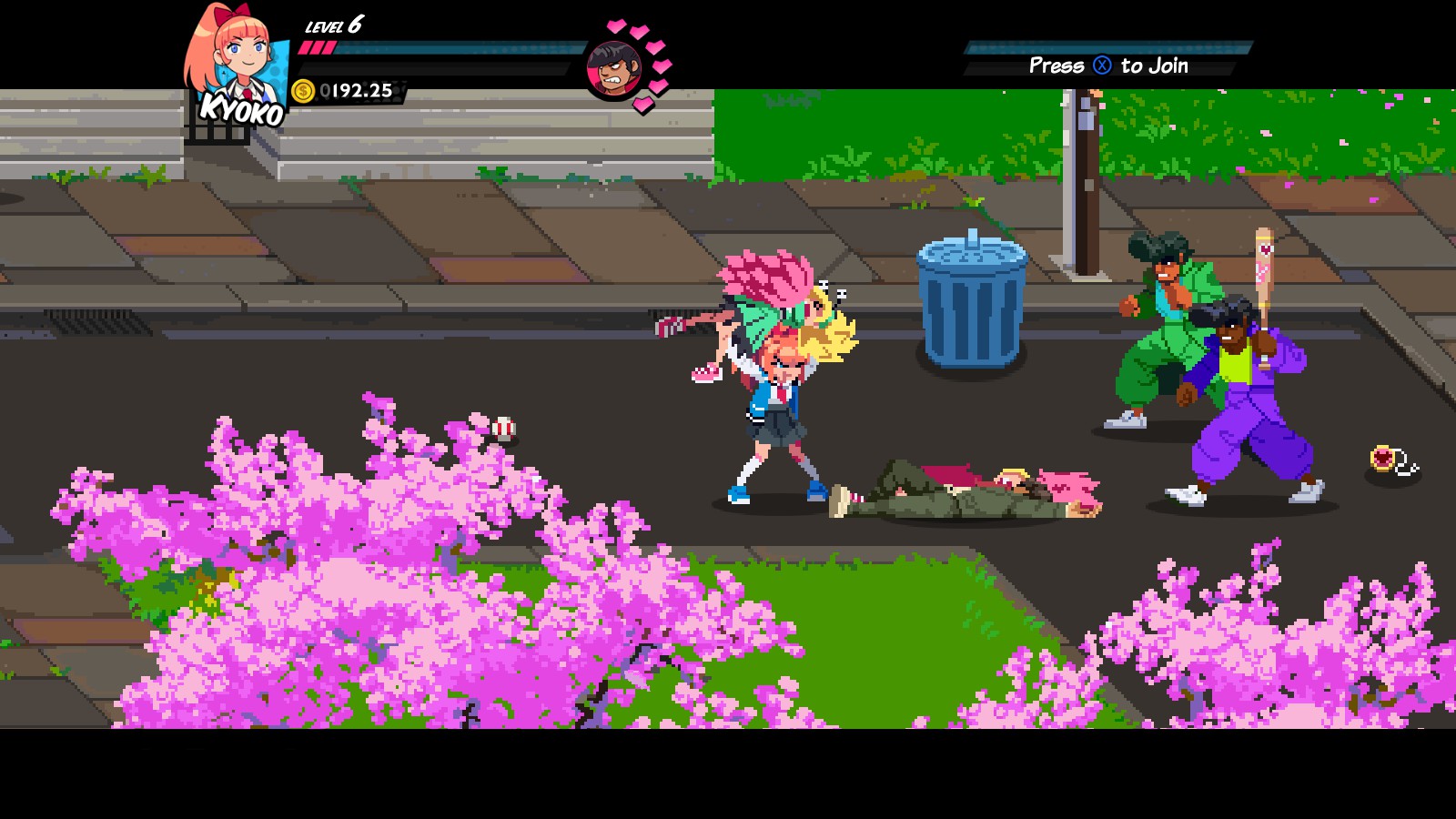 At first, you’ll only have your basic light attacks and heavy attack in your arsenal, along with grab moves for dizzy enemies. Each defeated enemy will bring you closer to unlocking your full potential as you’ll be rewarded with experience and cash. Some moves will unlock automatically based on your level, like a ground stomp so you can damage downed enemies, while others require you to spend some cash at the local Dojo. So if you want to have a longer light attack combo, running moves, more grab moves (specifically ones you can use when you grabbed an enemy from behind), aerial moves, or special attacks (which uses up your SP bar) you’ll have to save up some cash. As you learn more moves, you’ll have more choices when beating up enemies or figuring out combos. There are also various weapons you can pick up, which will knock down enemies with one hit. In areas where there are a lot of enemies (or during a screen lock) this can be helpful so you aren’t quickly comboed by two enemies at the same time. 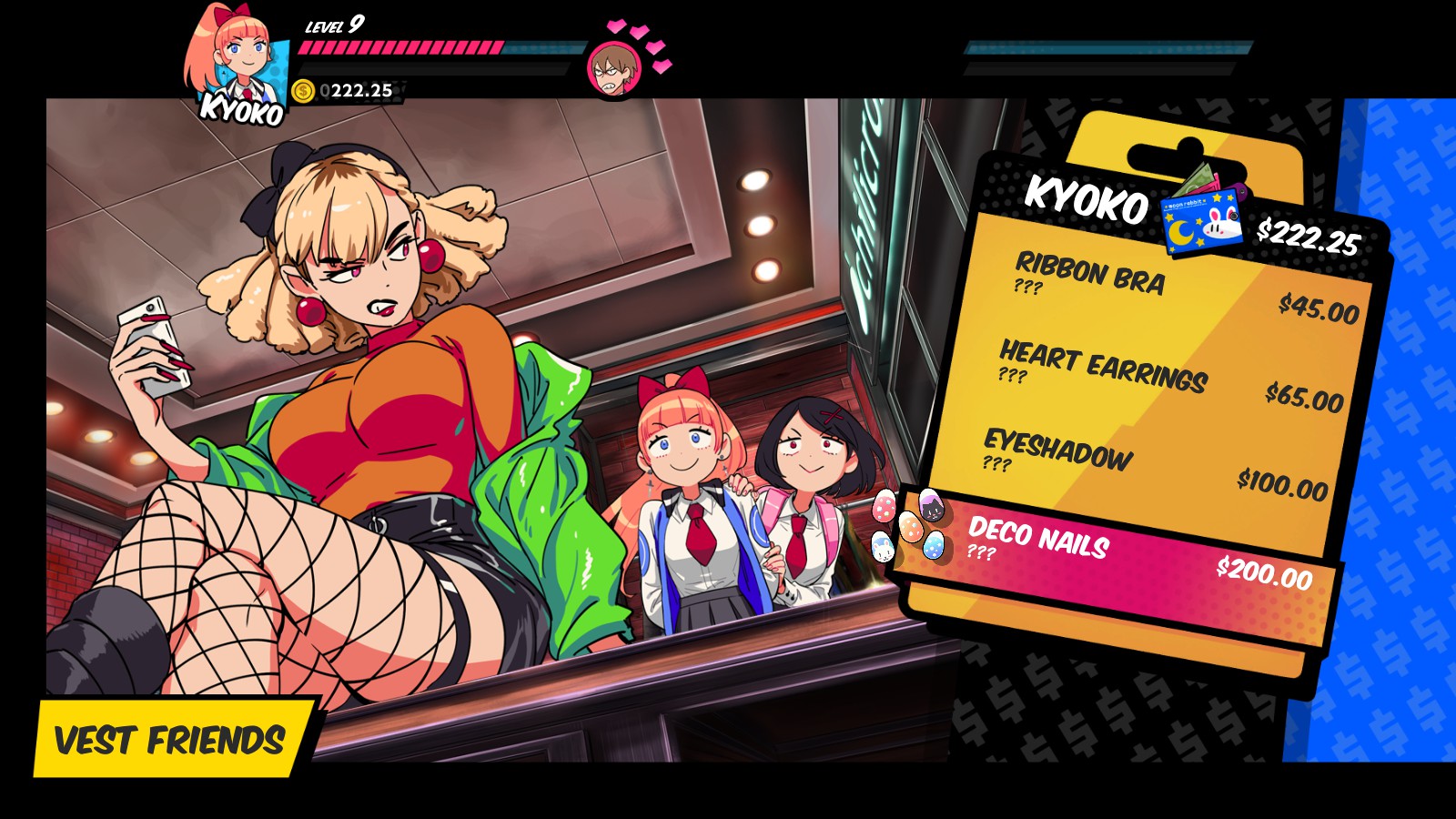 In addition to using your cash to get more moves, there are various shops scattered around River City. The most helpful are shops that sell food so you can replenish your health as vending machines are few and far between. You can either eat your food right there in the shop or put it in your pockets for later. Or you can buy accessories to boost some of your stats if you don’t want to wait (or don’t like) the ones you’re rewarded after defeating a boss or completing a side quest.

You’re also able to recruit some enemies. If they’re the last one standing, there’s a chance that they’ll beg for mercy. You can either beat them up the rest of the way, or spare them in exchange for helping you out. Once recruited, you can bring them out in the middle of a battle and they’ll do a special move. Although this isn’t exactly helpful as you’ll need to time it just right, it doesn’t seem to work on bosses, and if you’re anything like me forget you even have a recruit. 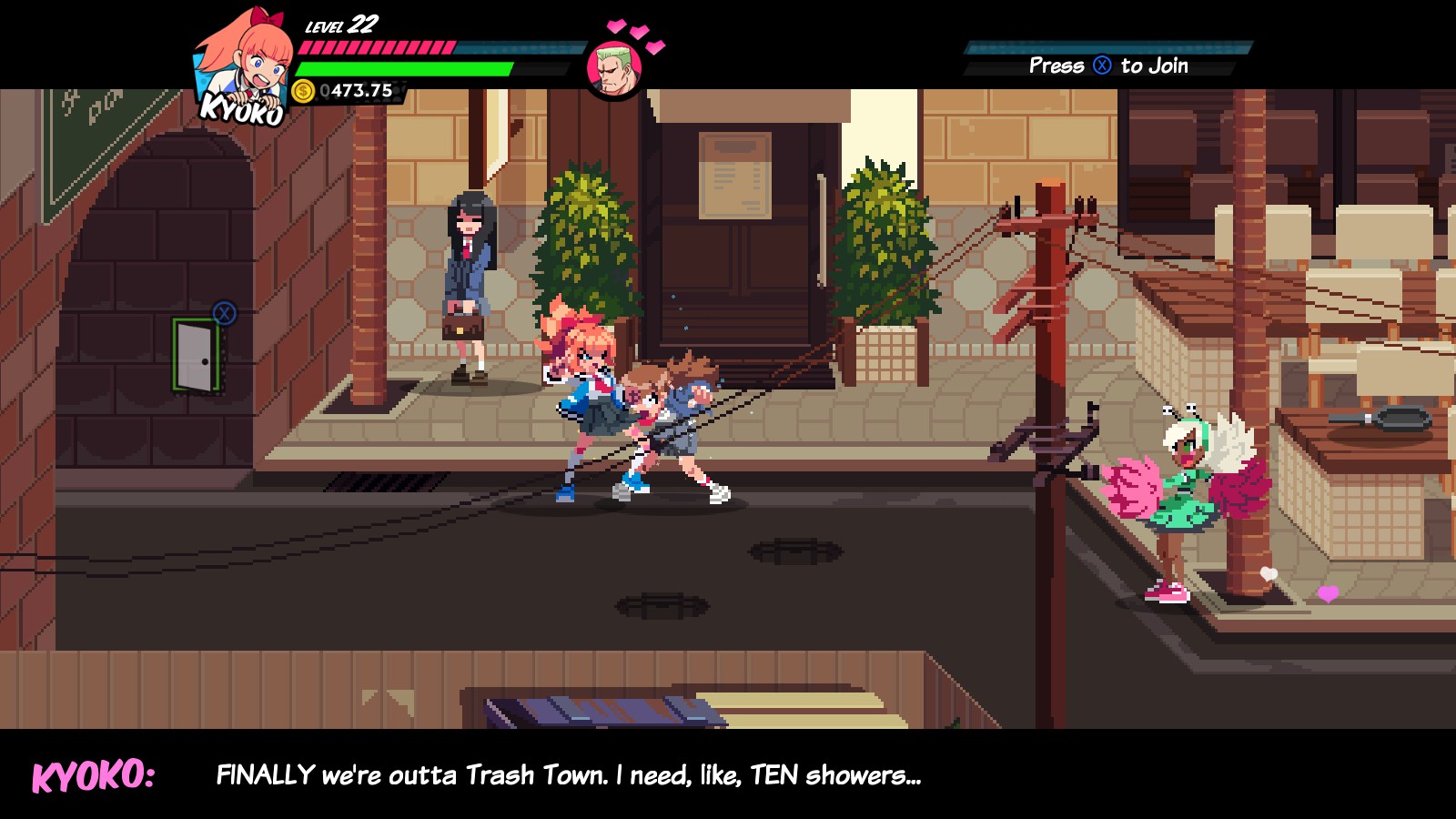 Once you finish River City Girls‘ story, there are a few things left to do. First of all, beating the game will unlock new game+ and two new characters for you to play. Both characters play differently from our main girls and fun to play as, but don’t expect anything to change (not even having their character art switched with our main girls in shops). There’s also a secret boss you can fight that only requires you to destroy all Sabu Statues scattered around River City and equip two matching accessories before entering the final boss room. Although, it really just goes into explaining the ending once you beat them and ends the same way. That’s not all, once you roll over to NG+ (which makes enemies tougher but carries over stats, items, and moves) cats will be strewn all around River City. Once you find them all, you’ll be rewarded with an accessory. Lastly, there is a secret shop (hint: it’s located by a bricked up doorway) which is actually available once you discover the area it’s located in, but the items there are pretty expensive. Luckily, these items are not required for 100% completion (which is totally flexible if you’re planning to unlock all achievements). 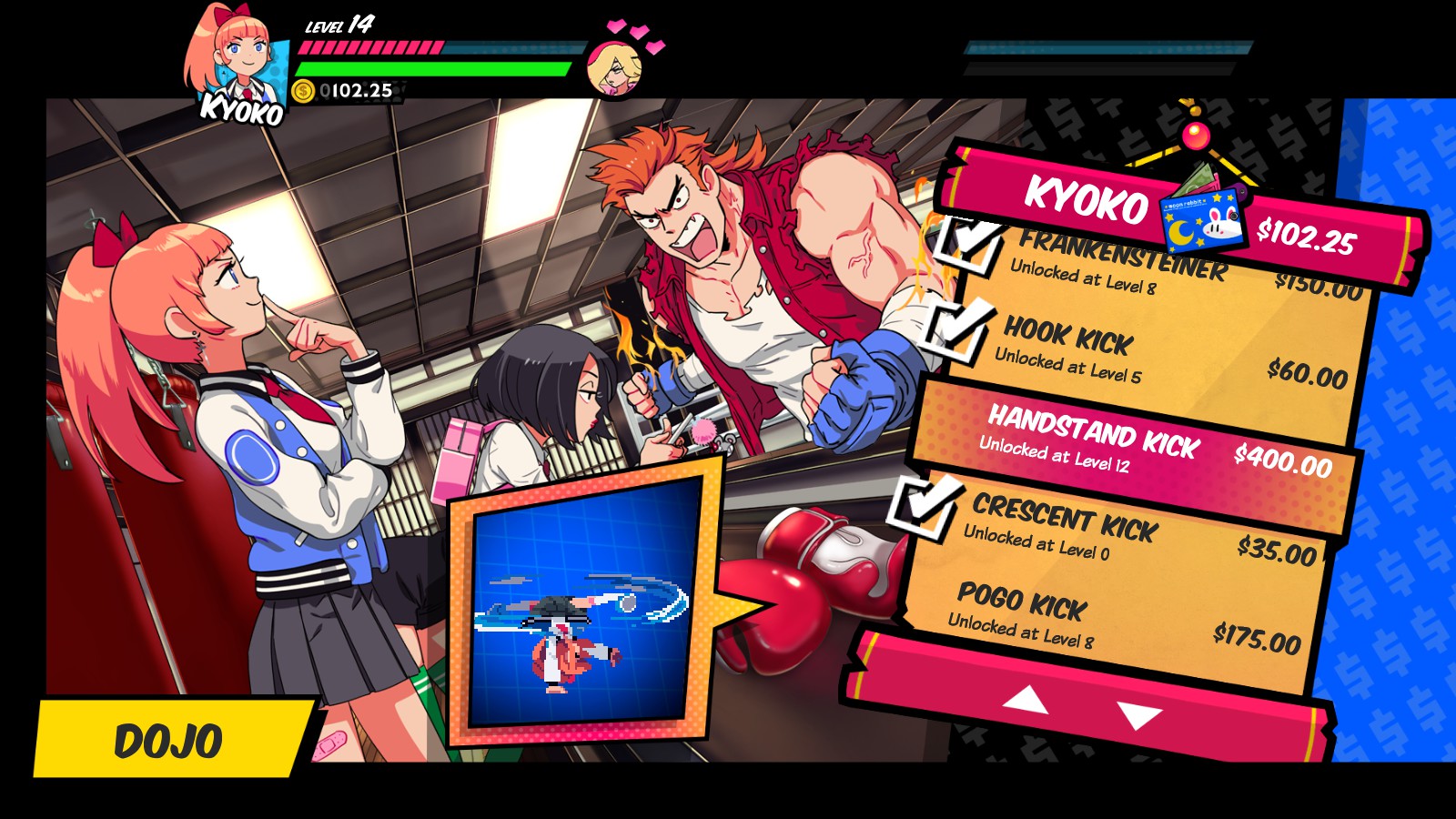 Sadly, River City Girls isn’t without its faults. Many of these are small, but they do stack up. First of all, your light attack button is basically used for everything. It doesn’t seem too bad, but it’s really easy to accidentally change areas or pick up a weapon when you didn’t mean to. Blocking/parrying seems slow compared to the small window you have. Before you buy items, the effects they’ll have on you is unknown (with the exception of a couple items). This is fine with food, but not knowing what accessories do is a tad annoying. It would also be great if the Dojo gave more information on the various moves, like if it was a special or a grab move as you can’t really tell by the preview (it would be even better if you could try it out). Those who were planning on playing co-op will also be disappointed that only local co-op is supported. And finally, the last one is River City Girls‘ ending. Oh boy, the ending. River City Girls is great, but the ending is just bad. It’s so bad that it sours the whole experience and I don’t fault anyone for dropping the game after accidentally learning about it.

I get what it was going for, but it doesn’t exactly work as an ending, even after skimming some River City history. It’s not worth ending your game over a joke, especially one that requires you to know about the previous games when they probably knew a lot of people coming in would be new to the River City franchise. If WayForward really wanted a joke ending, it probably would have been better ending it on Kunio and Riki not actually being in trouble (like it looked like they were being kidnapped) or they escaped moments before. Or heck, reveal it earlier and have the rest of the game being Kyoko and Misako dealing with the revelation. Not just end on it. Misako and Kyoko deserve a better ending. 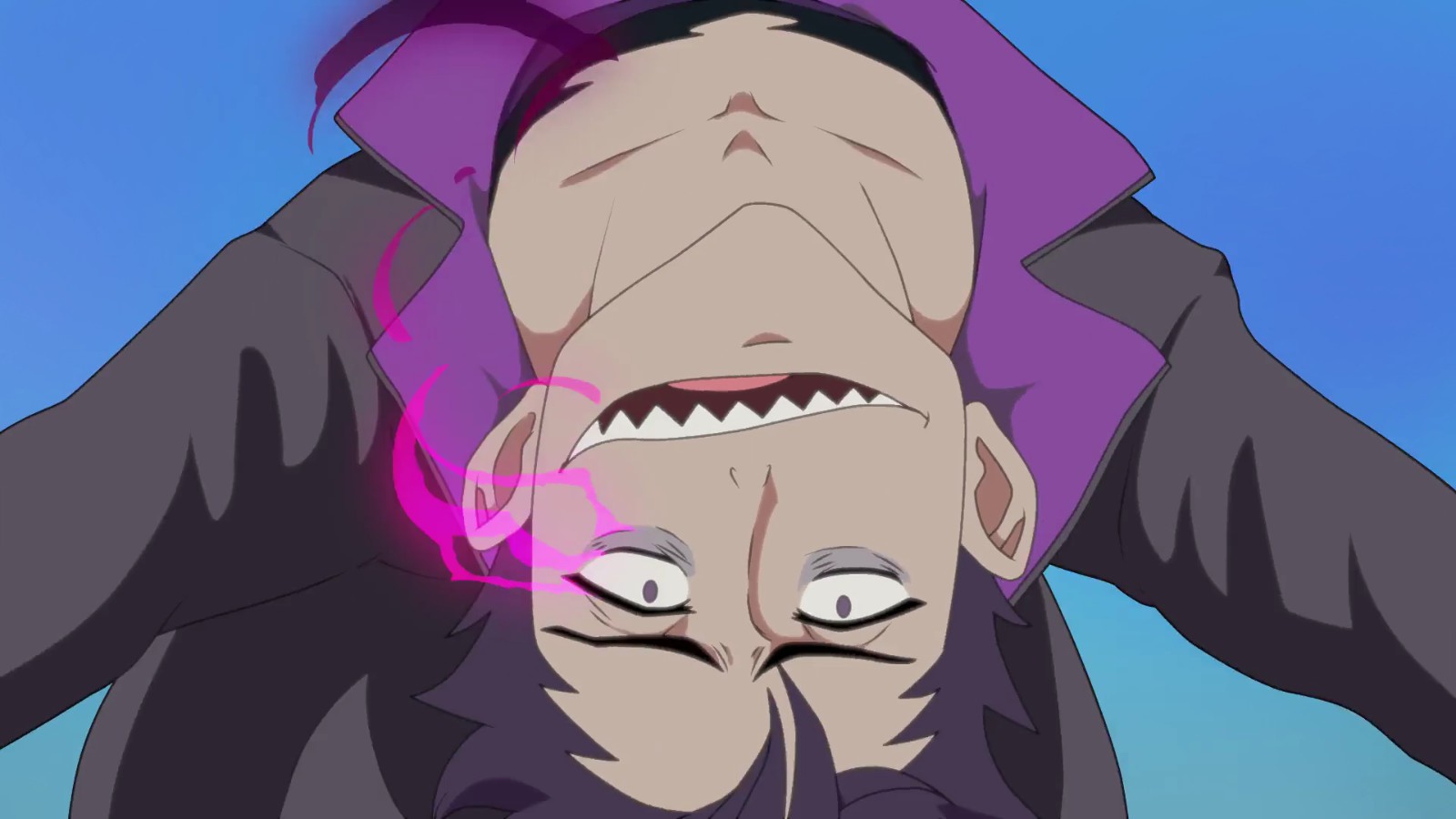 River City Girls is a blast to play. The art and animation is gorgeous, the soundtrack and voice acting is great (even though Godai’s seem to stop hiding his accent as the game goes on), the bosses are fun to go up against, and I absolutely loved the dynamic between Kyoko and Misako. Apart from some of the bosses, my favorite part was when Kyoko and Misako bantered with each other or with other characters. Despite the annoyances and the ending that I’m trying to not let it get to me too much, I had a ton of fun and the jokes did tend to land for me. If you’ve been a fan of beat ‘em ups or this is the first one you’ve been interested in getting, you won’t go wrong with this one. Though, I would probably suggest waiting for a discount as $30 is a bit pricey (especially considering the ending).