Do you fancy blasting around in your very own handcrafted dune buggy? Then jump into the massive open-world builder that is Trailmakers!

Build a car, a plane, a boat or maybe a… carplaneboat? With Trailmakers intuitive builder, it is as easy as snapping together real building blocks. Take your machines on dangerous exploration missions, breakneck rally races, or go to the sandbox and build that hovercraft you have always dreamt about.

Build intuitively with modular blocks – it is easy to get started, and the possibilities are almost infinite.
Explore a vast open-world and escape the planet in the survival game mode “Stranded in Space”
Go on breakneck rally races with vehicles of your own making.

I played the alpha build of Trailmakers way back in April 2017. I was intrigued by the game even though at the time it was barely more than a tech demo. The Unity physics engine coupled with the build your own vehicle mechanic was a compelling prospect. The design obviously needed fleshing out with more content, parts and building bricks. Forward on to 2018 and the early access release. My fellow Save or Quit college Genki’s reviewed that version and was generally impressed with the game. You can read his thoughts here.

Now in 2019, the game has reached the 1.0 milestone. A lot has changed over the past couple of years. New modes have been added along with a brand new campaign/adventure. 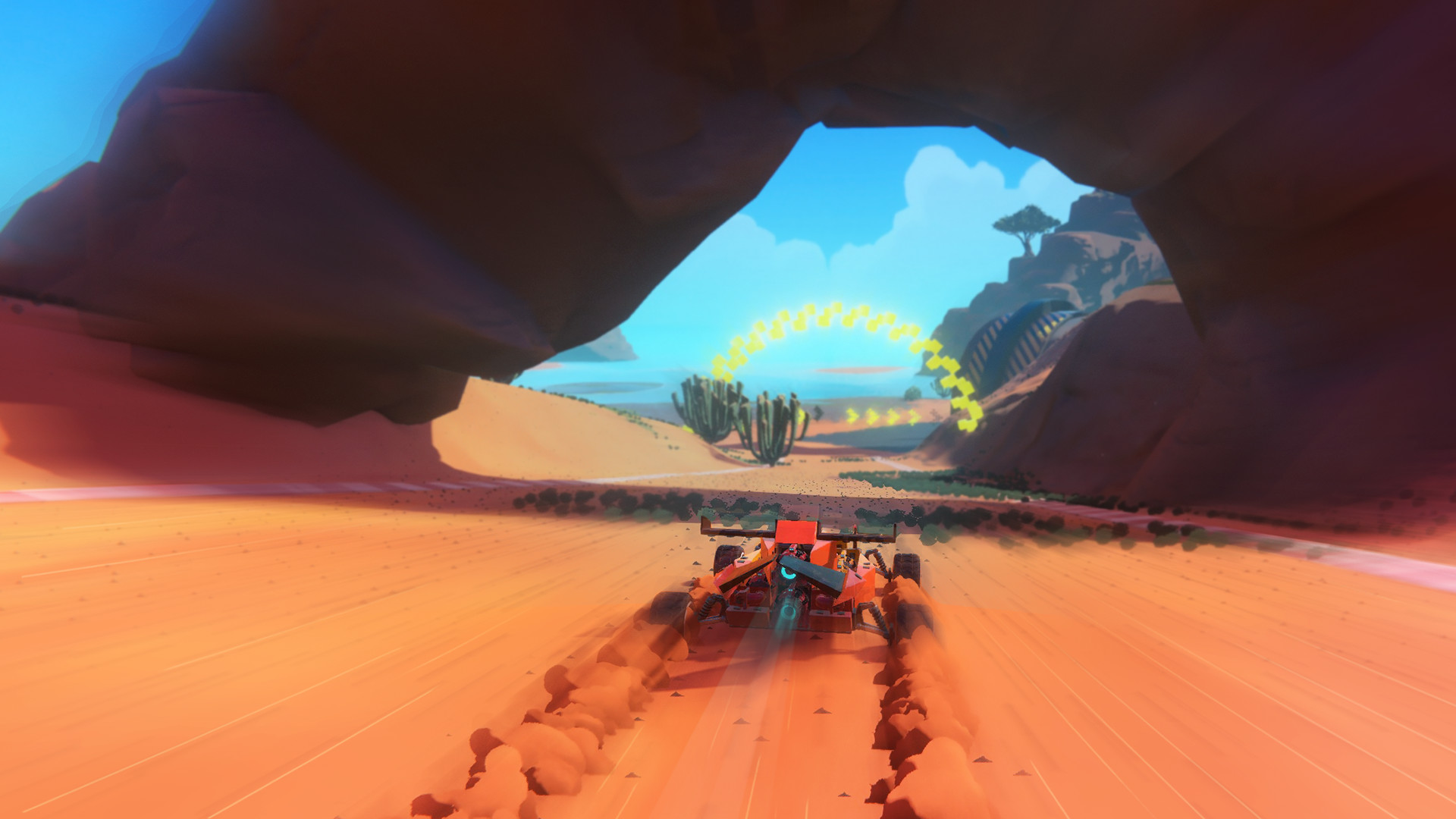 Stranded in space is the title of the new batch of content. The scenario is pretty straightforward. After being blindsided by a rogue asteroid your spaceship is shattered into hundreds of pieces. Caught in the gravitational pull of a nearby planet you crash land. Marooned for eternity unless you can salvage the parts of your ship and make orbit.

This single-player or multiplayer campaign is an excellent introduction to the game. By exploring the landscape for lost parts, you slowly get to grips with the physics engine and how to build basic vehicles to help you on your quest. In the opening few minutes, you’ll come across a recovery drone. These act as fast travel points and also beam up any parts you find. Once parts have been beamed up you can then use them to modify the basic starter vehicle blueprint. Besides salvage, there are gold and power cores scattered around the world. The latter are vital if you want to increase your vehicle’s potential, both in terms of speed and raw grunt. 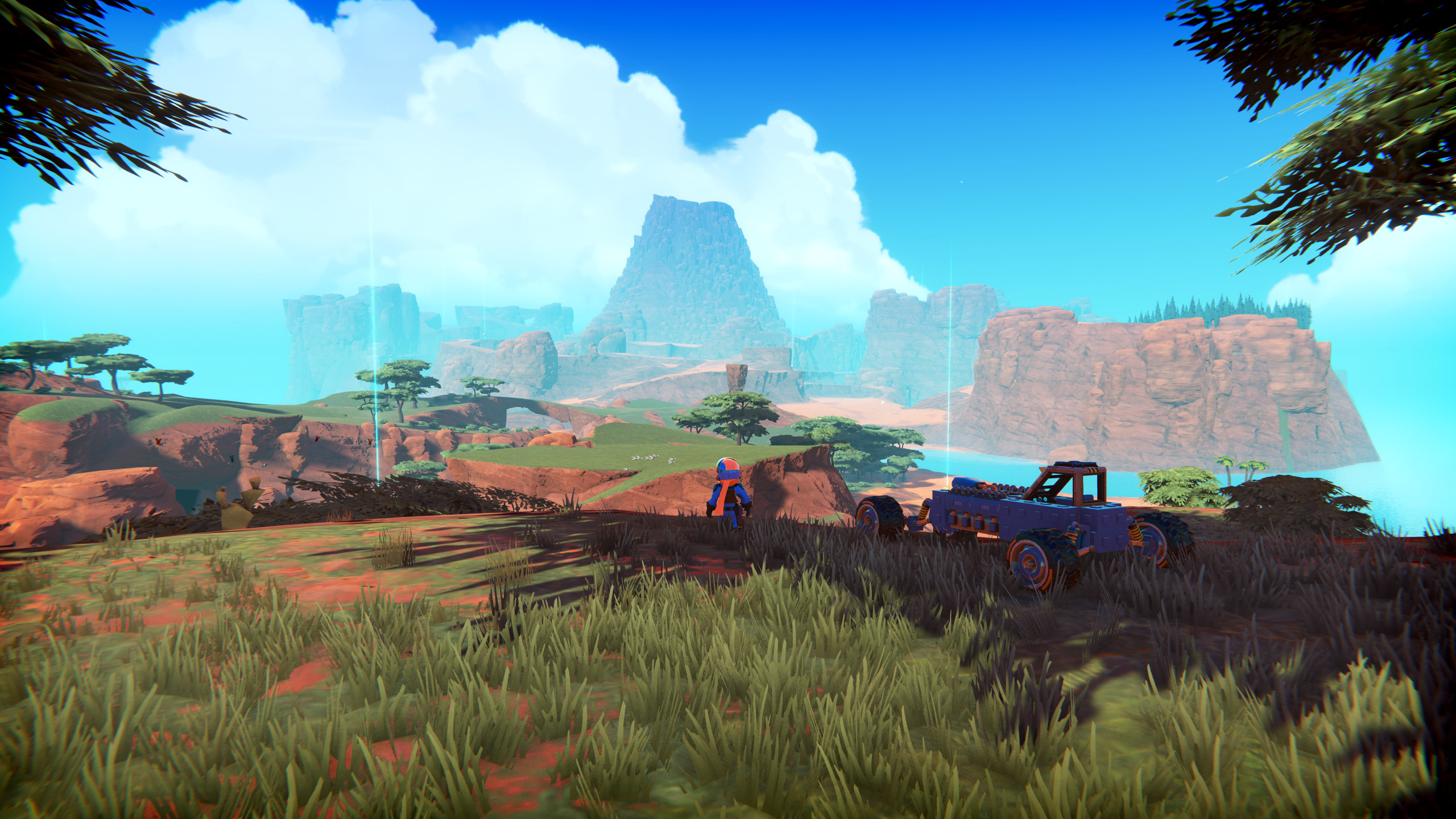 Gold nuggets are strewn around the map. These can be spent on accessory blocks, which are basically vanity items to dress up and add a little individual flair to your favorite buggy, submarine or jet plane. These can be anything from flags, airhorns, wheel rims, bumpers and even black antlers.

The entire map plays out as a big environmental puzzle. Some salvage is perched high on cliff tops which are inaccessible to your basic buggy, others can be seen on distant archipelagos. By accruing new parts and cores, you unlock new blueprints that utilize these items into building vehicles with extra functionality. Buoyancy tanks open up the amphibious template. This opens up the map by allowing you to transverse rivers and land on new islands, scattered around the many landmasses. The templates only get you halfway. Combining them with new parts such as the electromagnet and headlights makes hooking up scrap some much easier. Slowly by discovering the terrain and the urge to create new hybrid vehicles, the game pulls you into its spell. Every new basic shape, engine and wheelset adds a fresh range of possibilities. It is an intoxicating mix if you have a creative mind. 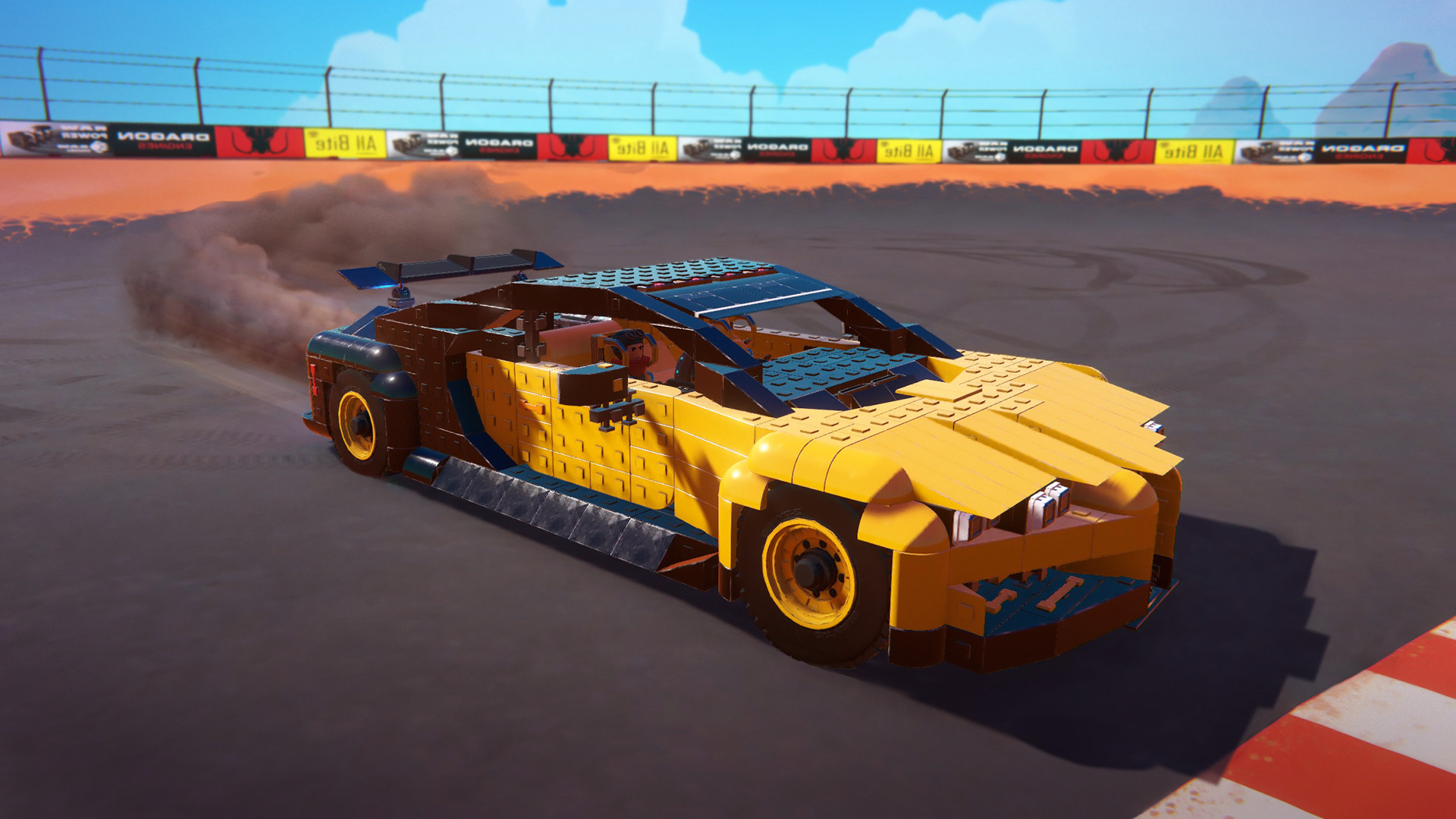 The Rally mode will please any fan of Nadeo’s Trackmania series. It’s basically a carbon copy of the fast-paced racing design. A bespoke playground has been fashioned which will test the skills of gamers, both in blueprint smarts and racing aptitude. Each race win unlocks a new challenge and a different course. These can vary greatly from flat Grand Prix track layouts to demanding hill climb assaults. Every race comes with a ghost car for each time category of gold, silver and bronze. These can be raced against with no fear of collisions or dastardly driving etiquette. Even your last time is saved as a ghost. So you can try to improve your time by beating your previous score. It’s great to have an actual visual image of your previous run. It helps tremendously with seeing where your racing line wasn’t quite perfect. Any time trial racer worth its salt has to have a ghost car feature and I’m glad that the devs have implemented it into the mode. It’s not quite as verbose as Diddy Kong Racing on the Nintendo DS buts its close.

There are a further three more modes to try out. Sandbox Island as the name implies, gives you free rein on another handcrafted landmass. All the parts are unlocked from the get-go. So you can go hog wild and create any kind of vehicle that your imagination can muster. Danger zone is yet another massive sandbox with all kinds of contraptions to abuse your favorite buggy or rock crawler. The final chunk of content is called Race Island. This has 7 different tracks to test your blueprints on and upload your best times to a global leaderboard. For anybody new to the game, that’s a hell of a lot to content to explore and enjoy. I’ve put 20 hours just into the lost in space adventure and have barely touched any of the other sandboxes. And If you like playing with friends, all the modes are accessible from a multiplayer lobby. 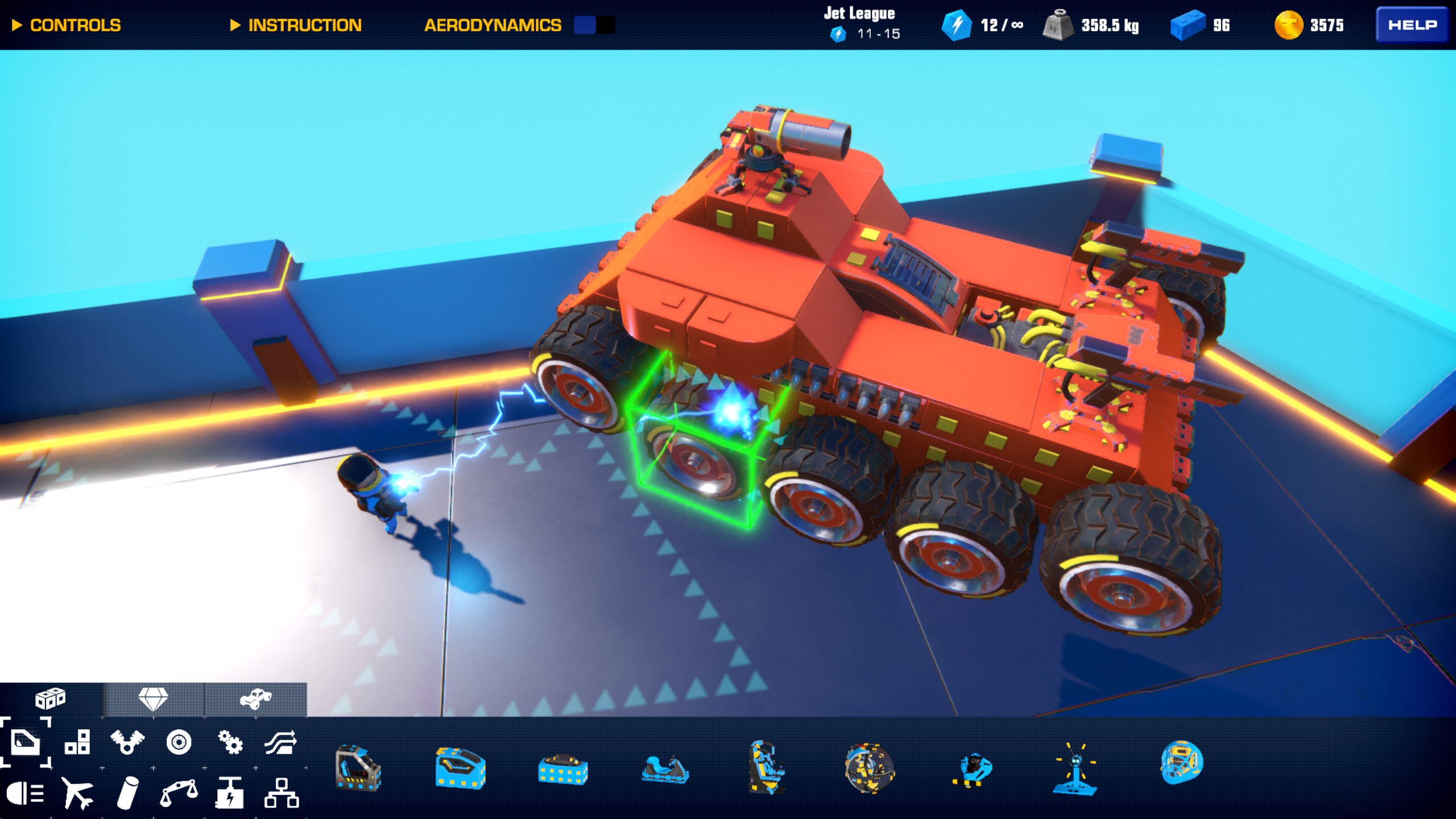 The key system to make any builder style game enjoyable is the user interface when constructing new vehicles. Obtuse and finickity controls quickly dull any creative spark. I’m happy to report that its a pleasure to cobble together parts due to the excellent GUI. Working on projects in three dimensions can be tricky. The devs have obviously worked hard to make the process as simple as possible. Parts quickly snap into place, they can be copied and mirrored by using a few handy dandy shortcuts. Fine-tuning your blocks is made easy by the dpad, which acts as a nudge button, so finessing designs is a delight, not a chore. Builds can then be saved as blueprints. All this can be done on the fly, no need to visit a garage or workshop. One button press lifts your current vehicle into space and you can easily make modifications on the go. A great quality of life feature is the blueprint history. If, in the heat of the moment you forget to save your latest greatest invention. The game automatically stores your last 10 or so modifications. These can easily be recalled and saved if you wish to do so.

So are you struggling for inspiration with your blueprints? Flashbulb says hold my beer with their seamless Steam Workshop integration. The whole shebang is baked right into the game. No need to exit and check out the steam page. Not only is it right there front and center. It also has filters for all types of vehicles. Every category is catered for, from cars, boats, planes and all the hybrids. Want to check out the latest wacky helicopters? you got it. Wanna see what’s hot in the hovercraft scene? Job done. It’s basically a free shop window and a fantastic showpiece for the creative folk who make up the Trailmakers community. Nearly 28,000 designs at the time of writing are available to download, from the complex to the downright goofy. 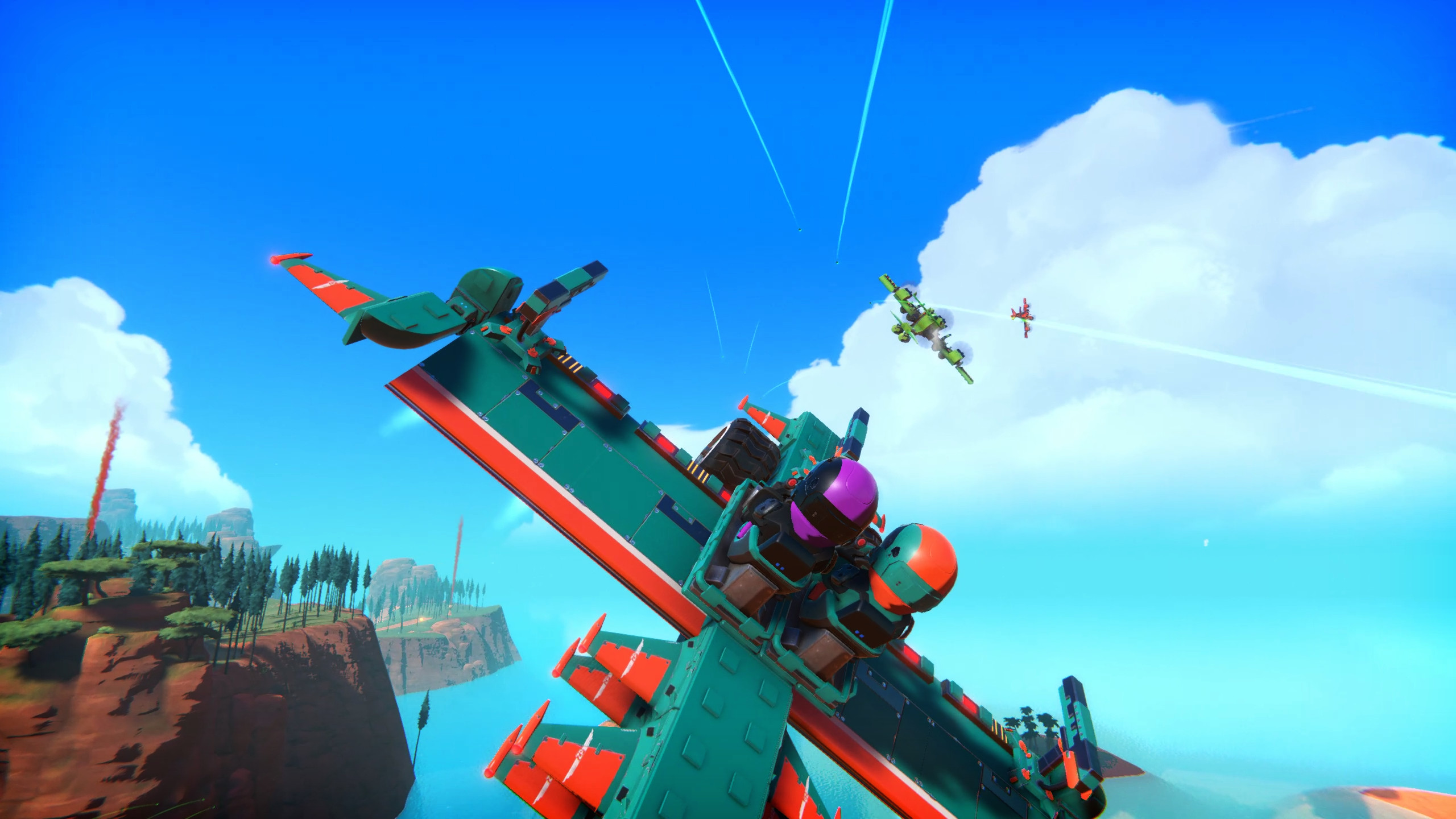 Flashbulb has gone for a bright cartoony aesthetics. The rich red canyon rocks remind me of the classic Wile E. Coyote landscapes, where mayhem and wacky hijinks ran amok. This is the perfect setting for a vehicular physics playground. All the new features of the current Unity engine have been employed. Lots of bump mapping and specular highlights on the terrain materials. The day-night cycle with its shifting hues and lighting shows off the geometry and leads to spectacular sunsets and sunrises. I found the frame rates to be consistent for a massive open world. Some other unity projects such as Subnautica have struggled with this issue. Clever use of LODs for vegetation assets has helped keep the experience smooth. I ramped everything up to the max settings and didn’t need to lock the vsync to keep things playable.

The builder & main menu soundtrack is a very mellow piece. A sparse instrumental track with hints of percussive hang, electric piano and bowed guitar treatments. Much like the rest of the game, it slowly creeps into your subconscious and stays there. After spending countless hours tinkering with templates and perfecting weight distribution, this tune now haunts my every waking hour. Even whilst taking in my breakfast and gazing out onto my back garden I can see hear the fractured melodies and drifting chords swirling around my head. It’s up there with the Minecraft soundtrack for pure understated brilliance. 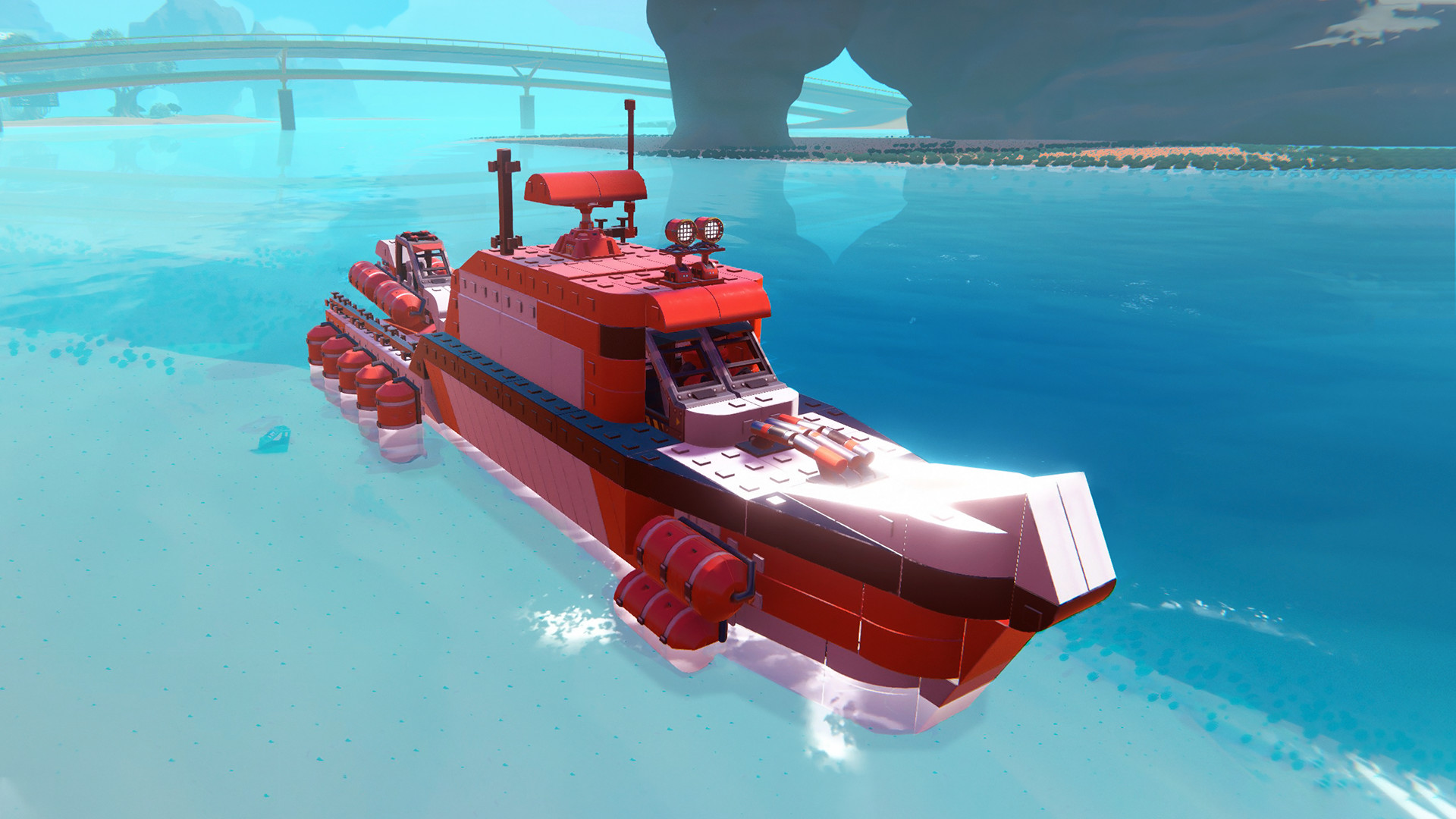 I feel the need. The need for speed!

The whole game runs well on my modest potato PC. Though there are a few flies in the ointment. One particularly annoying bug is a random glitch with the vehicle sound FX. this causes the engine samples to disappear for 20-30 seconds at a time. Changing the blueprint often cures this problem but it’s a bit of a pain in the bum. I dunno whether this is a streaming issue or just a combination of my hardware and Windows 10 squiffy audio systems. The other issue is related to the camera when your vehicle is close to bluffs and cliffs. Rotating the view makes the terrain clip through the player’s camera causing the inside of the mesh to be exposed. It’s not a game-breaker but it looks ugly and breaks the immersion of the experience just for a moment. 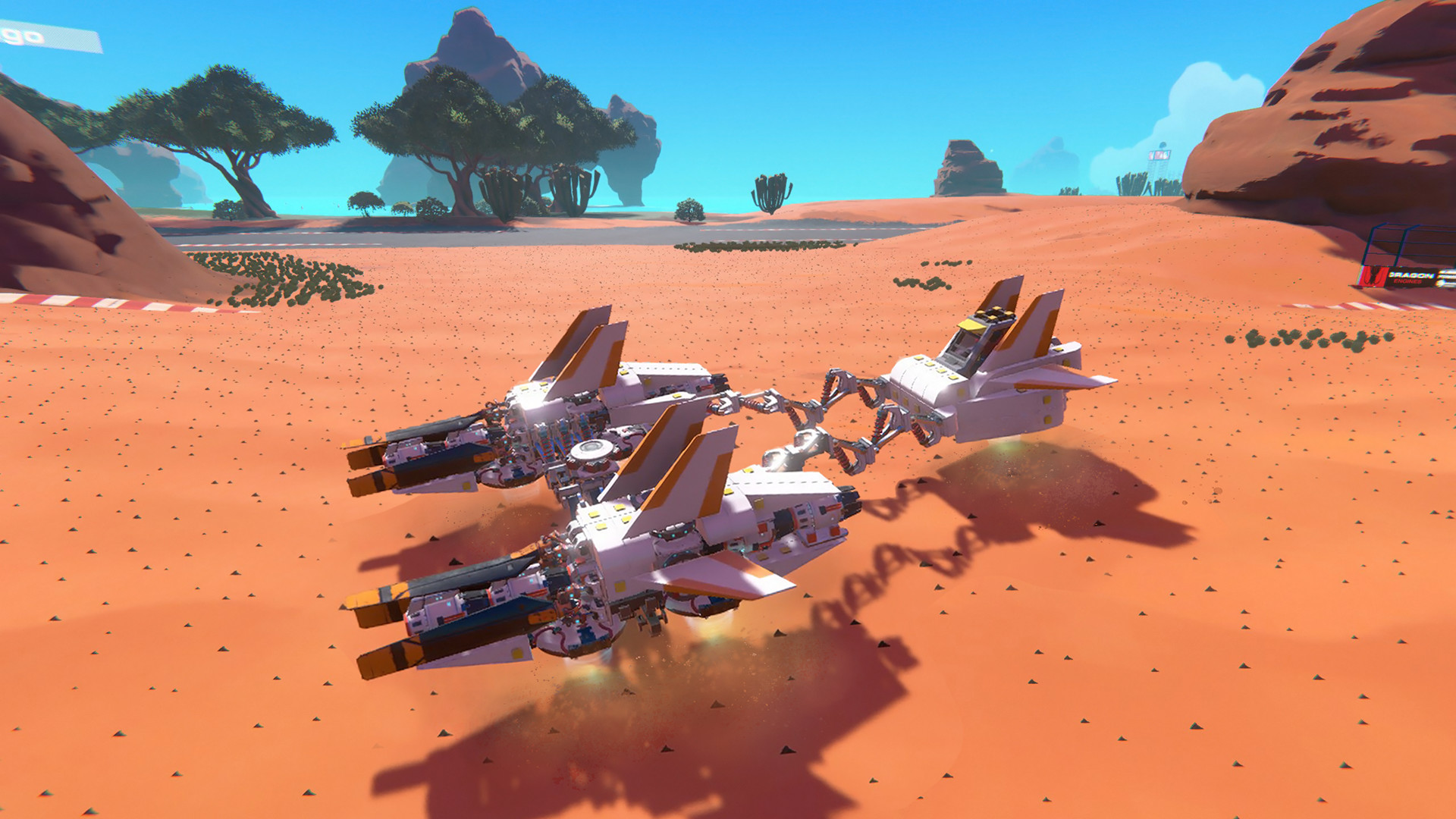 Trailmakers takes the rich heritage of builder games like the classic and criminally underappreciated Banjo-Kazooie: Nuts & Bolts and goes one louder. Folks who had fun with Besiege and The Last Leviathan will also have a blast. Flashbulb has created an open world sandbox and combined it with a superb design studio. The result is a deeply absorbing game that will eat up all your free hours and weekends