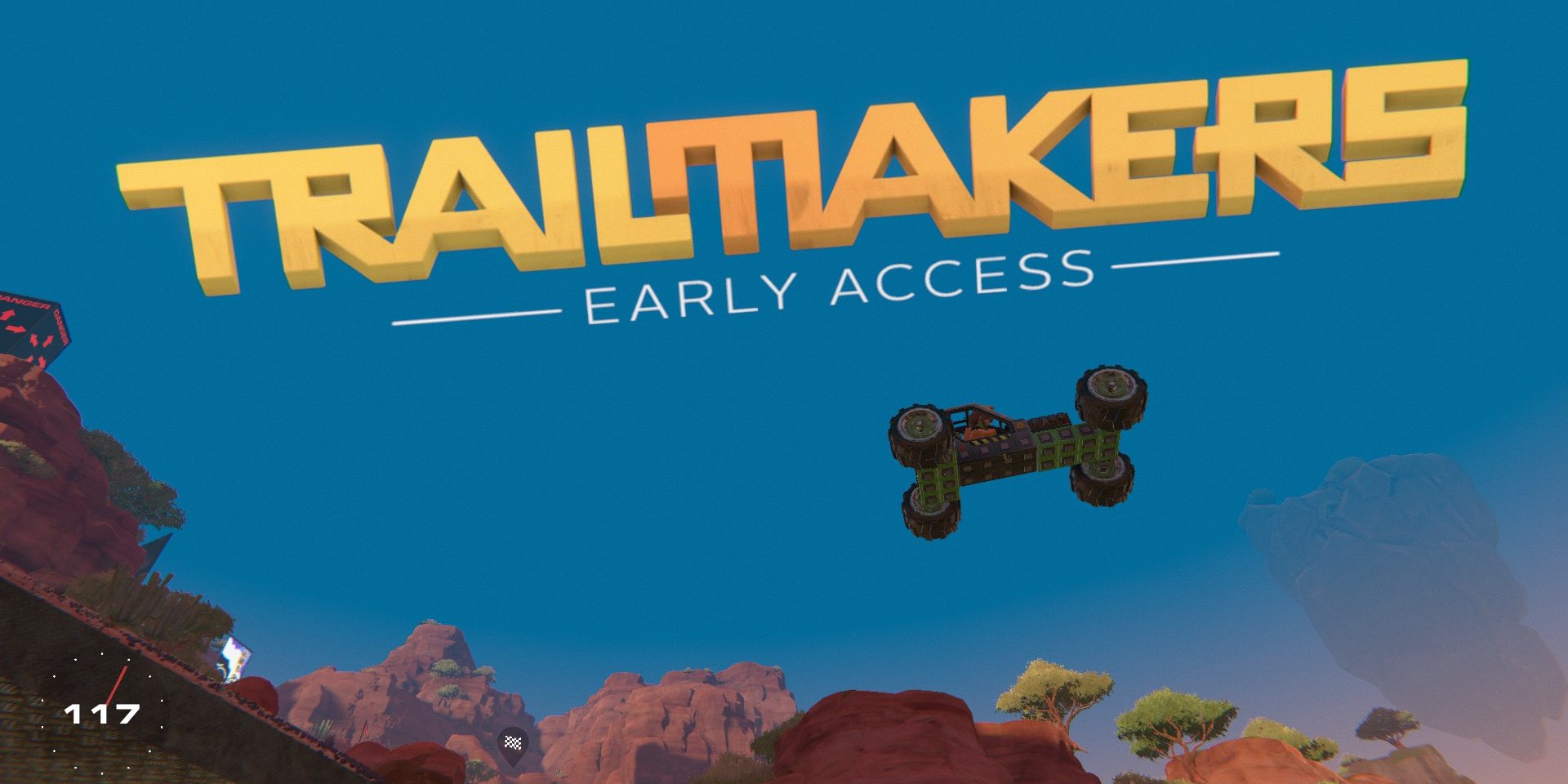 Building vehicles in Trailmakers is a blast!

Trailmakers is the debut Steam title from indie developers, Flashbulb.

Trailmakers puts you in control of a trailmaker: a planet-hopping engineer-racer type person who takes part in huge rallies across strange planets using only a small number of building blocks and an exceptionally cool hand-held tractor beam / vehicle assembly tool / thingamabob to assemble the vehicles you drive.

Though you start out with only a small array of ground-based vehicle components, you’ll unlock various other bits and pieces that allow you to hover over water or soar through the air. Well, maybe not so much soar as rapidly climb and then plummet.

Trailmakers looks good. It drops you — literally, via a sort of drop ship — into a full three-dimensional world with an apocalyptic, deserted-world feel (apparently appropriate, based on the brief background story that’s recently been added to the game: you’re on a tourist world that was unfit for purpose because it was too dangerous). Though it’s sparsely populated by any sort of fauna, except for the piranha-like fish that immediately devour you if you touch the water — it doesn’t feel completely empty, as the Trailmakers have left you signs and arrows pointing your way, at least to begin. 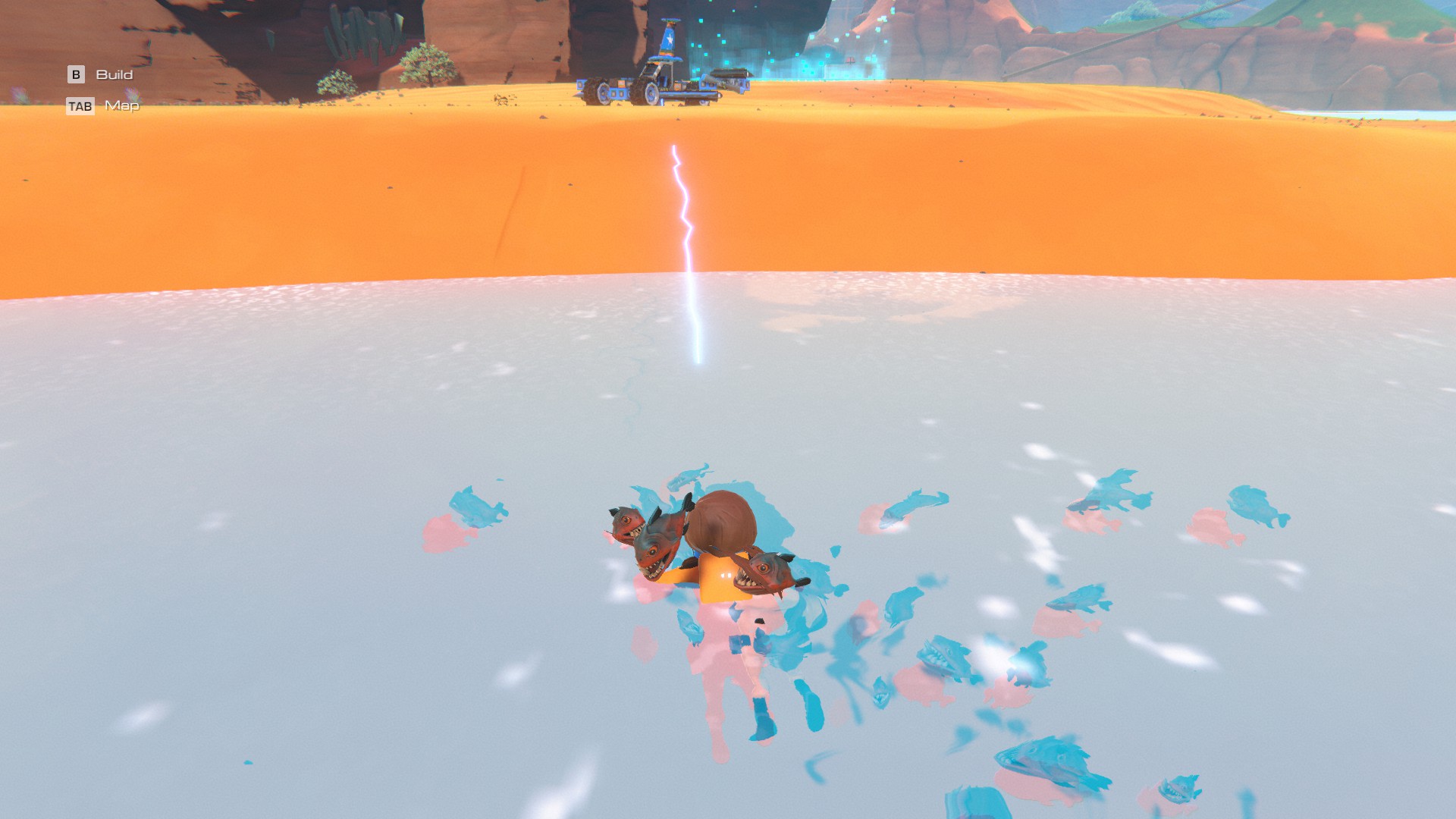 Though there’s currently no introductory video to set the scene or any background story provided, the brief introductory building tutorial and follow-up half-an-hour or so in expedition mode provide enough information for you to get the gist of what’s required of you.

The game world is seen through a traditional floating third-person camera, positioned by default behind your vehicle (or in front of it while reversing) and with generally appropriate automatic movement to follow your direction of travel. The world looks pretty nice, with different terrain types (each with different look, sound, and traction), a day-night cycle, very pretty sunlight, and nice special effects: smoke, dust, etc. 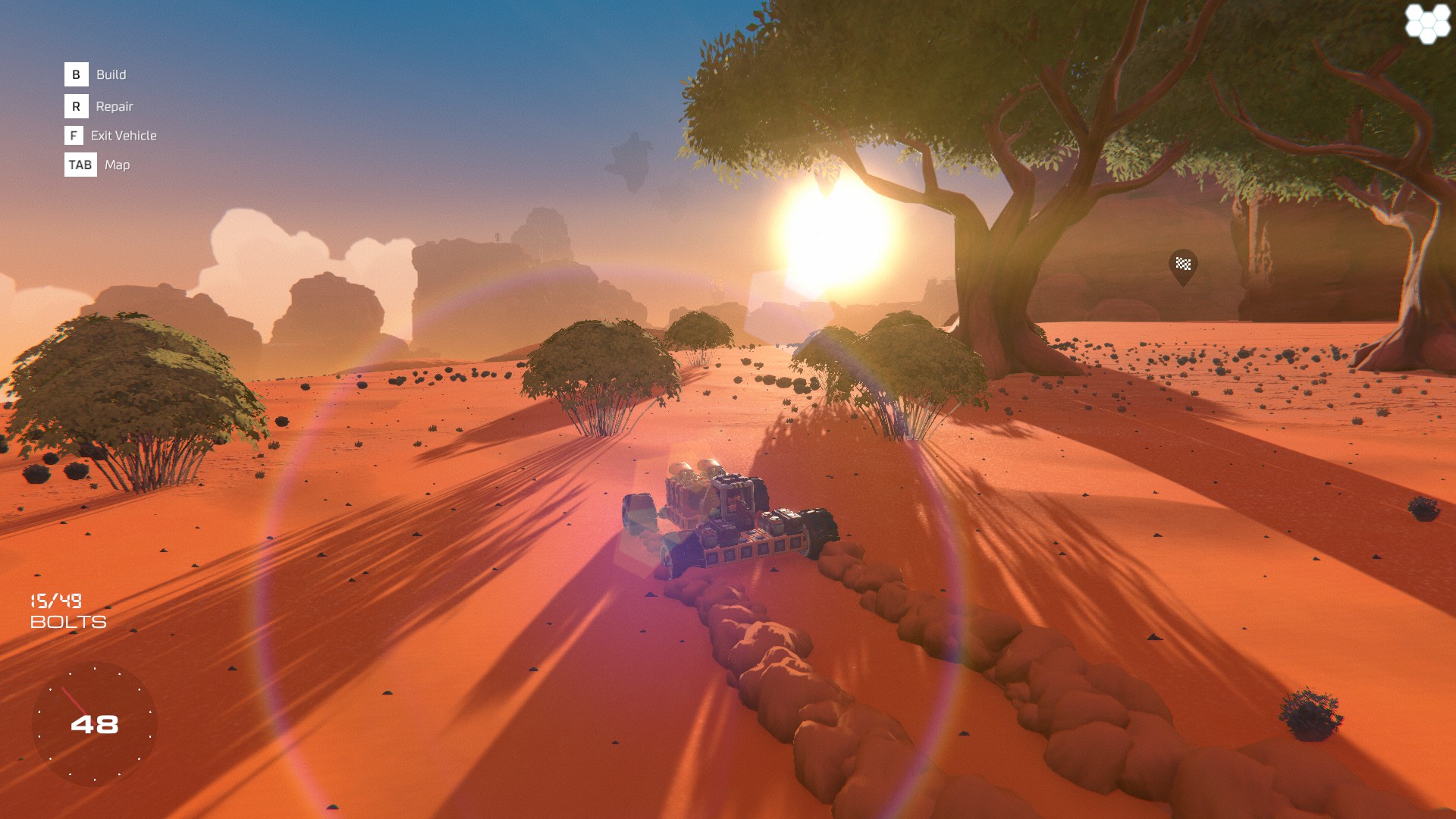 Though I don’t think it’s cell shaded — if it is it’s a pretty subtle effect — it does look cartoon-like in a way. Vehicles are made of modular blocks, with a style reminiscent of Lego Technic ™. They don’t look exactly roadworthy or aerodynamic, but they do exude a certain charm. You can choose a male or female character, and pick your primary and secondary block colours, but beyond that there’s no customisation. 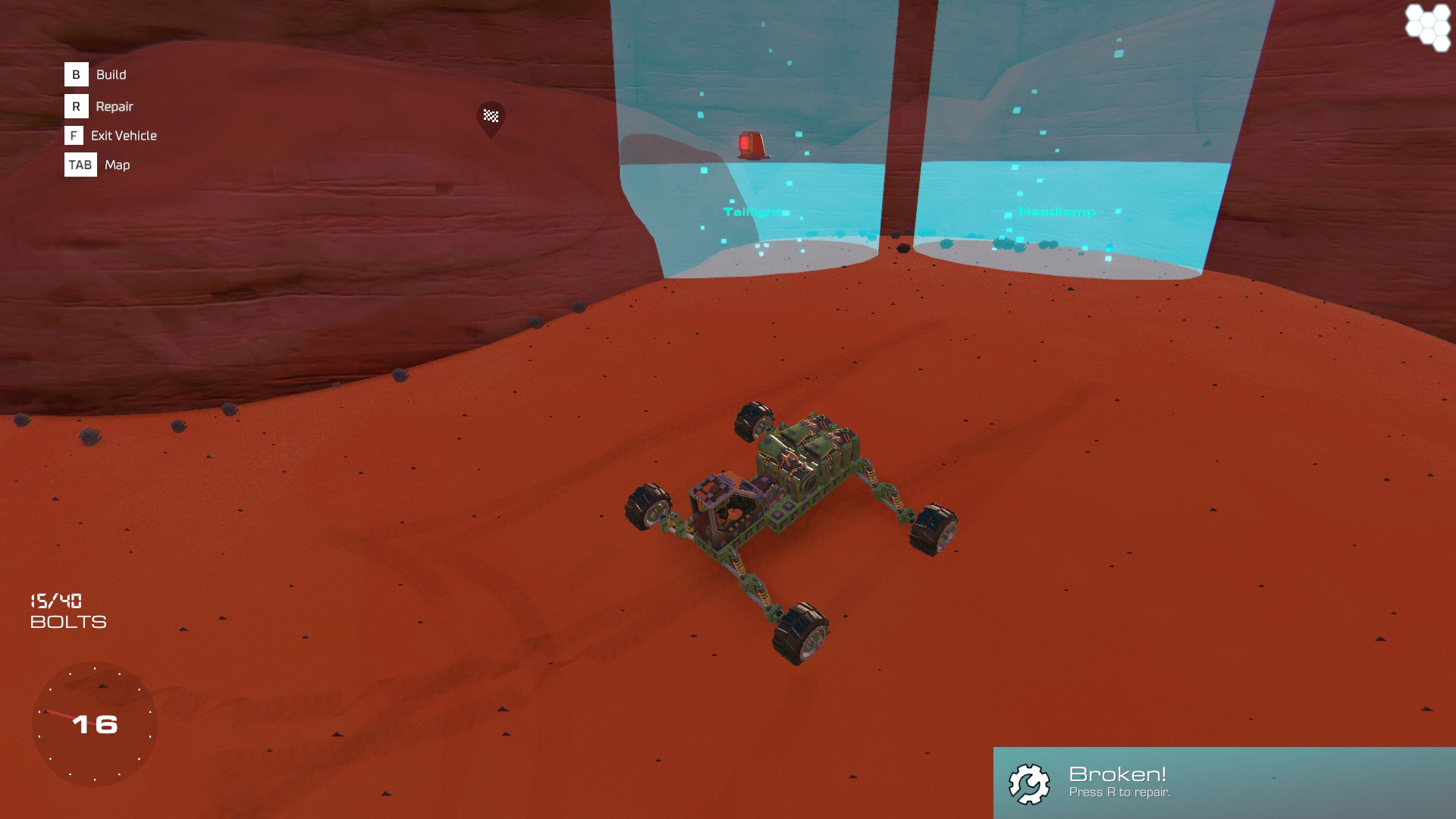 Sound effects are really good, with meaty explosions and some wonderful engine and component sounds. I particularly like the throaty V8 sound of the Bulldawg when compared with the high-tech whine of the Dragon. I’ve encountered an issue where the engine sounds sometimes drop out leaving only the creaking of the suspension, but it’s intermittent and temporary.

There’s limited music: a sort of sci-fi minimalist track for the menu/title music and a very brief ditty soon after you first start out (going over the first jump), but sound effects are prevalent and good enough that the lack of music is fine.

The game has a few minor graphical issues, including some weird anomalies such as water that disappears when you’re under the surface, objects sometimes stuck inside other objects, and shadows causing texture flickering on occasion, and a few sections with significant graphical stutter. There are only limited settings available, too: resolution, vsync, and a single detail setting. 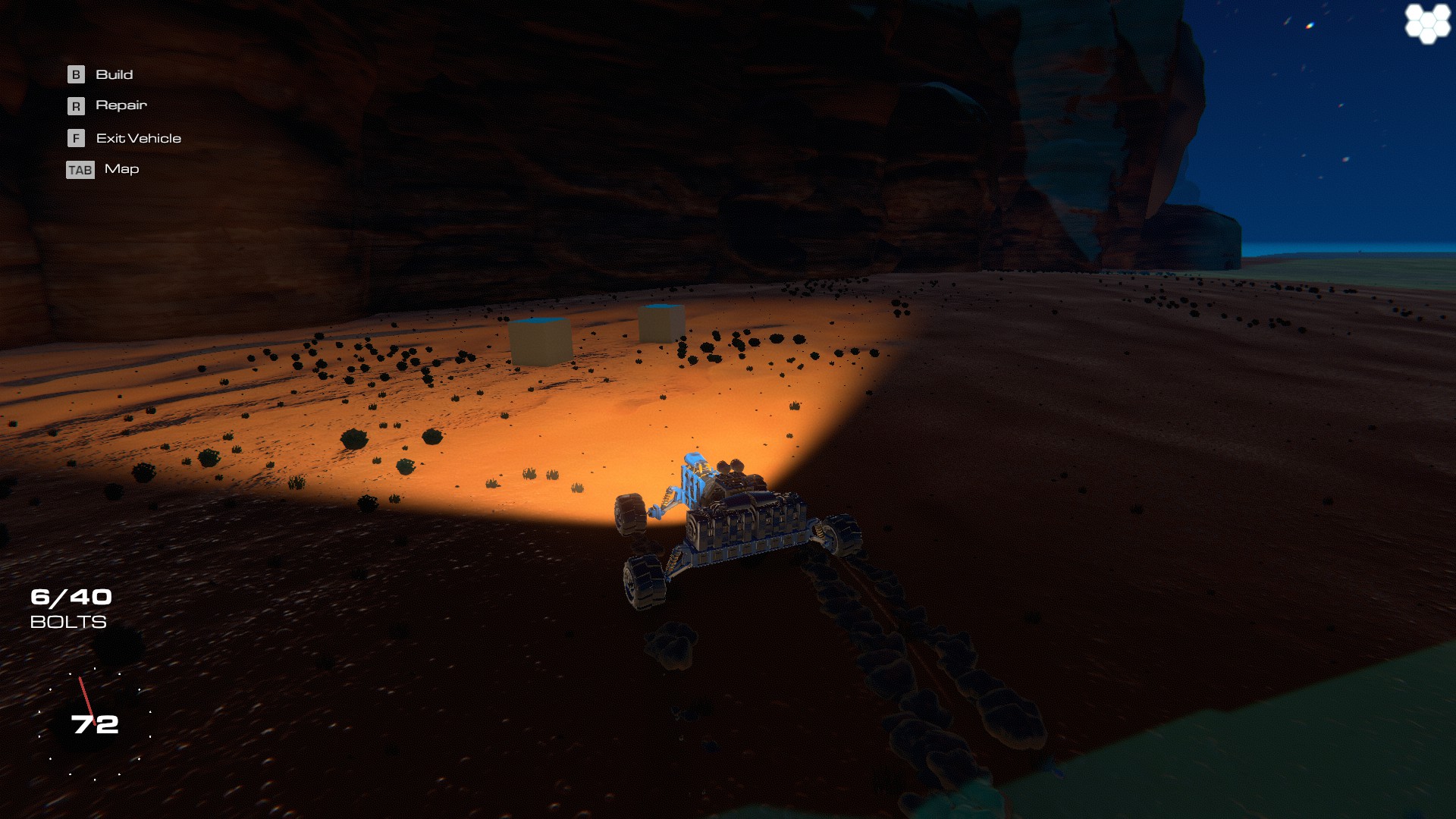 Trailmakers is divided into two modes: expedition and sandbox. There’s also a multiplayer mode that I believe encompasses a sort of deathmatch and sandbox, but I haven’t yet able to find anyone to play with, so I can’t comment further on that. There doesn’t seem to be any connection between what you achieve between the two single-player modes.

Expedition mode is the career or campaign mode. It drops you on a planet with only a handful of available building blocks and a map and gives you a goal: get to the end. The map is divided up into major checkpoints, between which you can teleport once you’ve unlocked them, and which give you a sort or score upon reaching them for the first time, based on the collectibles you found; and minor checkpoints, which simply offer a respawn point. 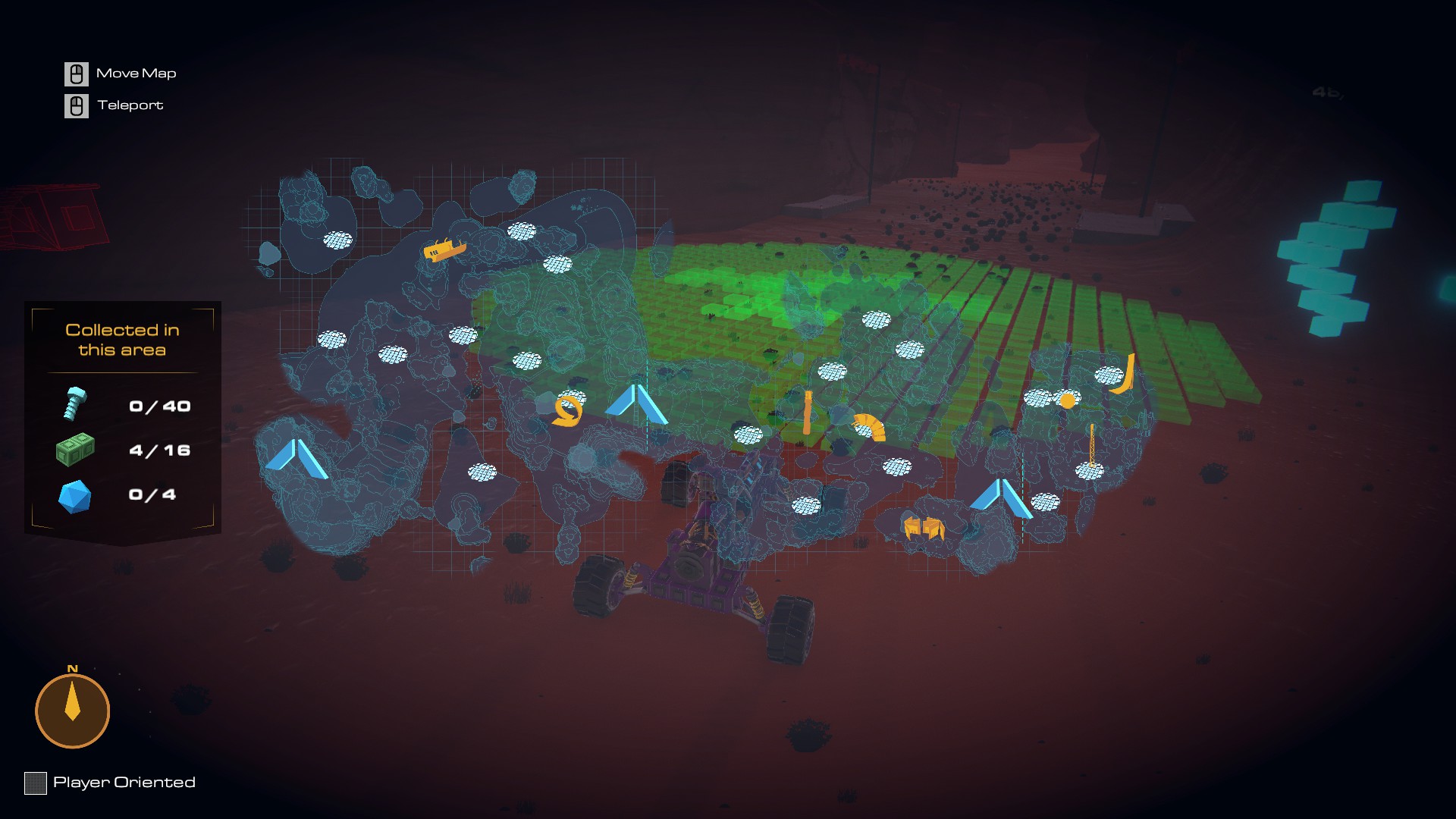 You’ll encounter obstacles to overcome and you can stop and rebuild your vehicle from available parts at any time. Need to drive up a steep hill without overbalancing? Add lots of power and make sure your vehicle is much wider than it is tall. Need to drive through shallow water? Build up your vehicle until your control seat is high enough that you won’t drown. 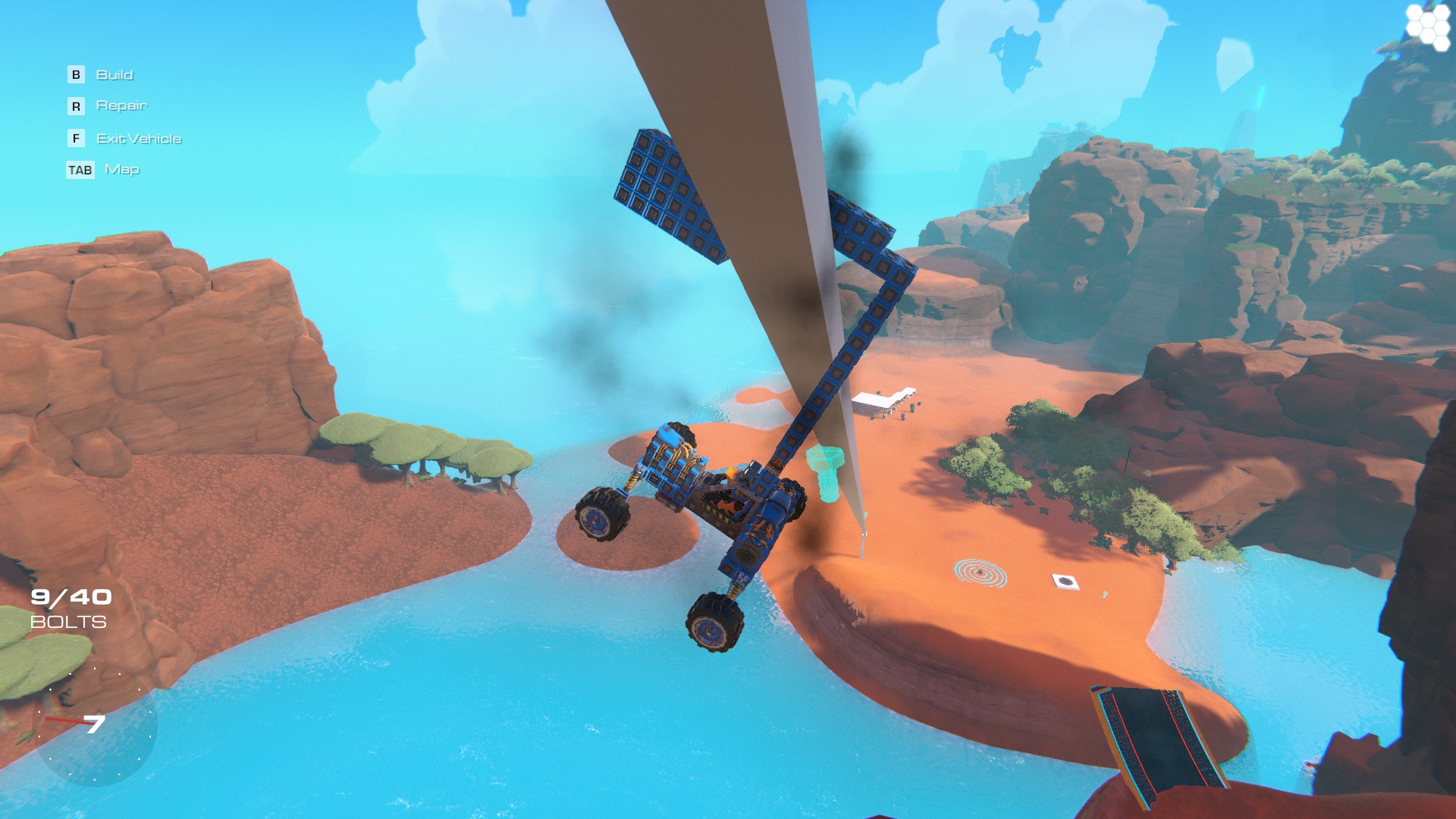 The game is forgiving with plenty of minor checkpoints, and unlimited free repairs and respawns. But you may find yourself stuck in a few places and having to backtrack until comprehension dawns on how to overcome an obstacle, or you notice a new section of the world hidden around a previously unexplored corner. This would be made nicer by allowing teleportation to minor as well as major checkpoints on the map.

Sandbox mode puts you on a different map and gives you free access to (almost) all of the blocks in the game. There’s no goal here other than to let your creativity run wild; build whatever crazy monstrosities you can imagine. Exploring the map is fun at first, but it’s the same every time you play, so once you’ve been everywhere once it becomes old news pretty quickly. 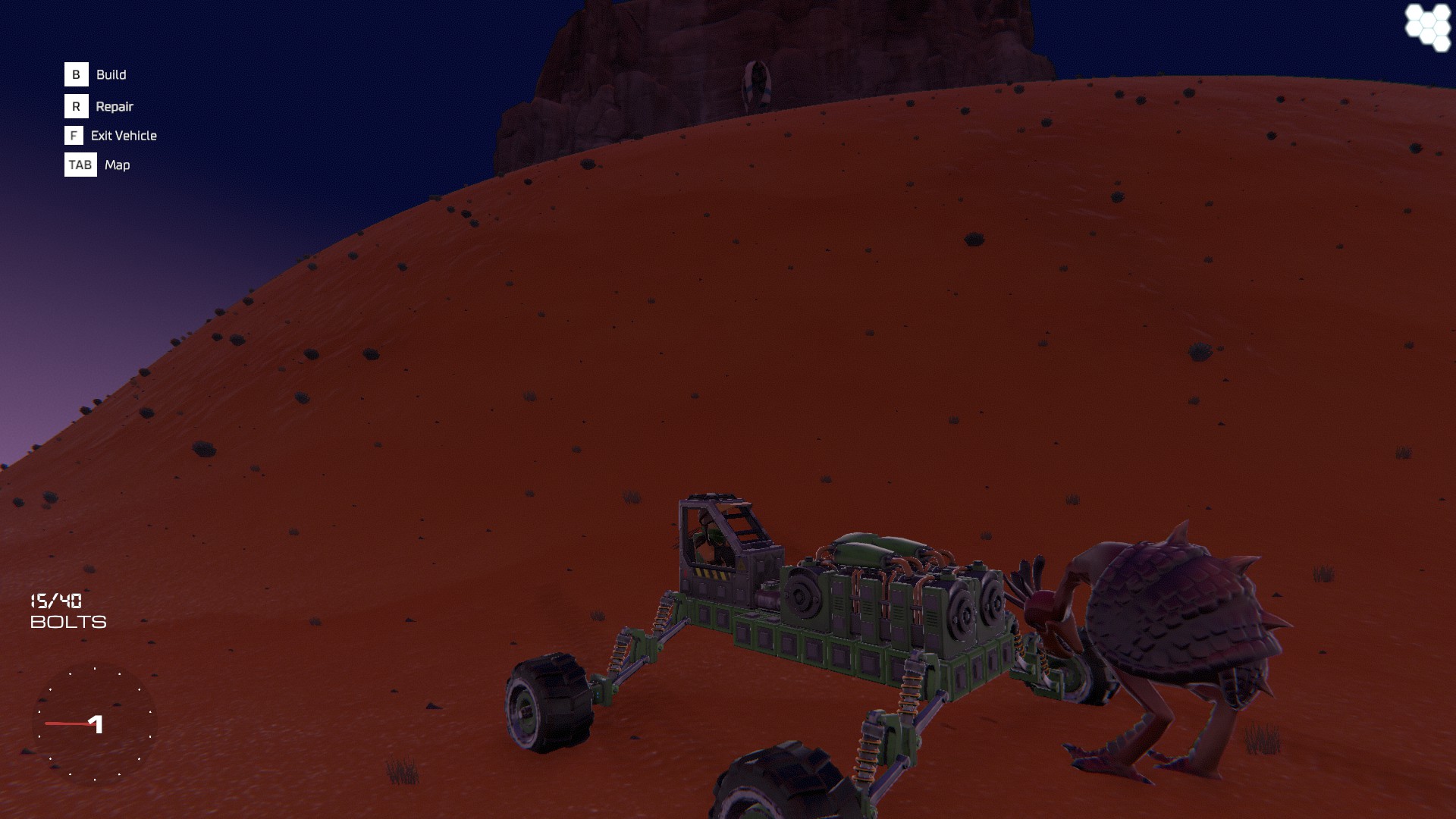 Current parts include wheels, wings, engines, jets, hover units, propellers, steering components, shocks, … . The list goes on. I did find the lack of flaps / ailerons a bit distressing when making my first flying vehicle, and for the life of me I still can’t work out how to make a proper helicopter, but it’s been great fun trying! There are also weapon modules, but I haven’t had a chance to test them out yet. 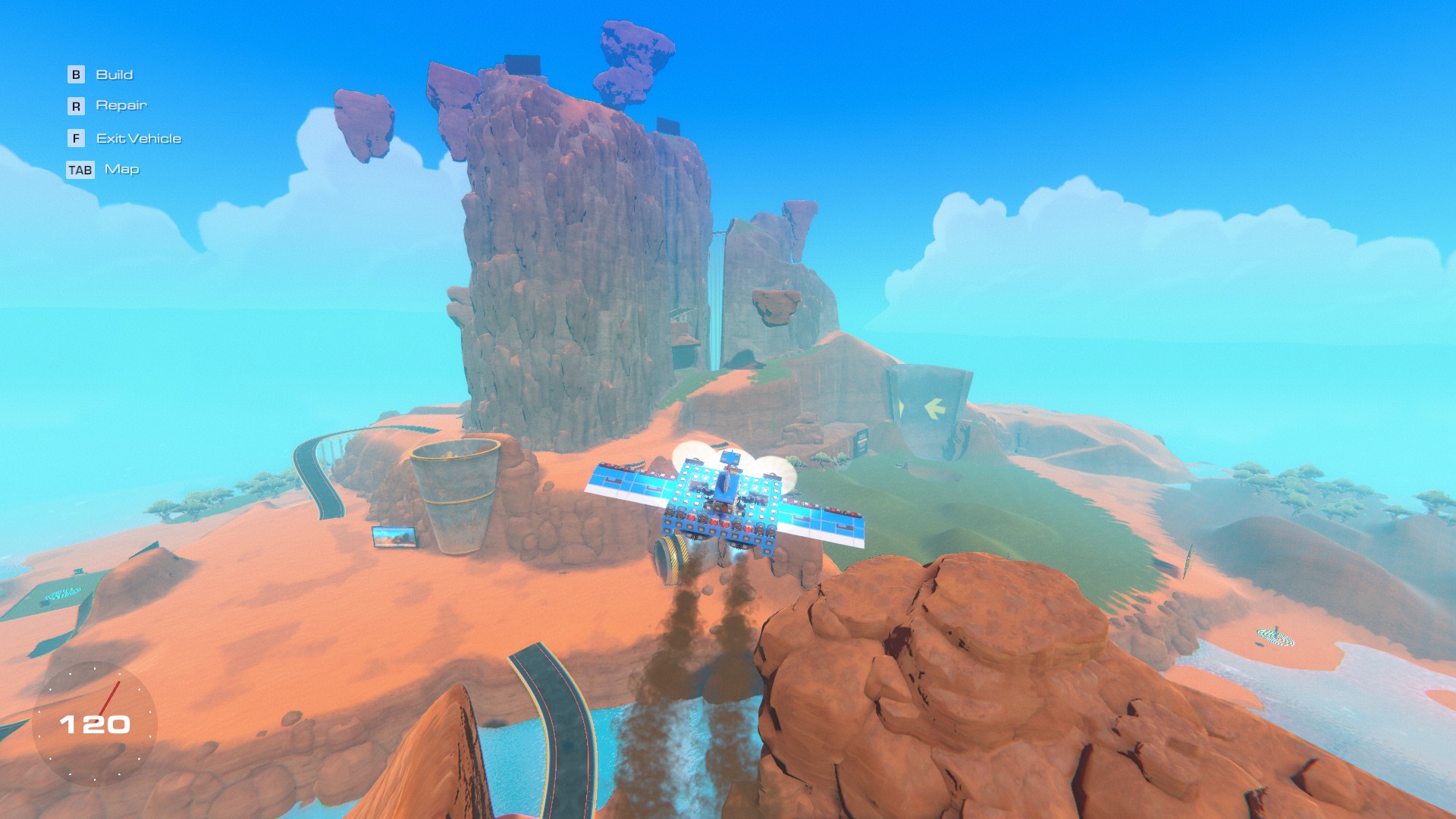 As I was playing a pre-release version I encountered a number of issues. I expect some of these will be addressed at the time of release and the rest will be worked on during Early Access, but it seemed worthwhile to mention them anyway.

First, the controls are terrible. As with many driving games, digital key input does not work well for steering as you’re either ‘full on’ or ‘full off’, so I’d recommend a controller with analogue sticks. But the game doesn’t use the right stick (or anything else) for rotating the camera — for that you need the mouse — so you end up driving with the controller and then desperately reaching for the mouse to move the camera. Similarly, the controller doesn’t work in building mode or the menus, either.

Other than that, I’ve had parts stuck inside walls and other world geometry intersection issues, too. In one attempt I was able to collect the headlight part, but it had no model associated with it, making selecting it from the building interface and positioning it rather difficult. I’ve been teleported without my vehicle, either requiring a respawn or rebuild (vehicle history makes this very easy!). And I’ve crashed and been stuck with the “backspace to respawn” message displayed, but the game wouldn’t let me respawn, requiring a quit and reload. But overall the game is pretty stable, with most issues being minor. 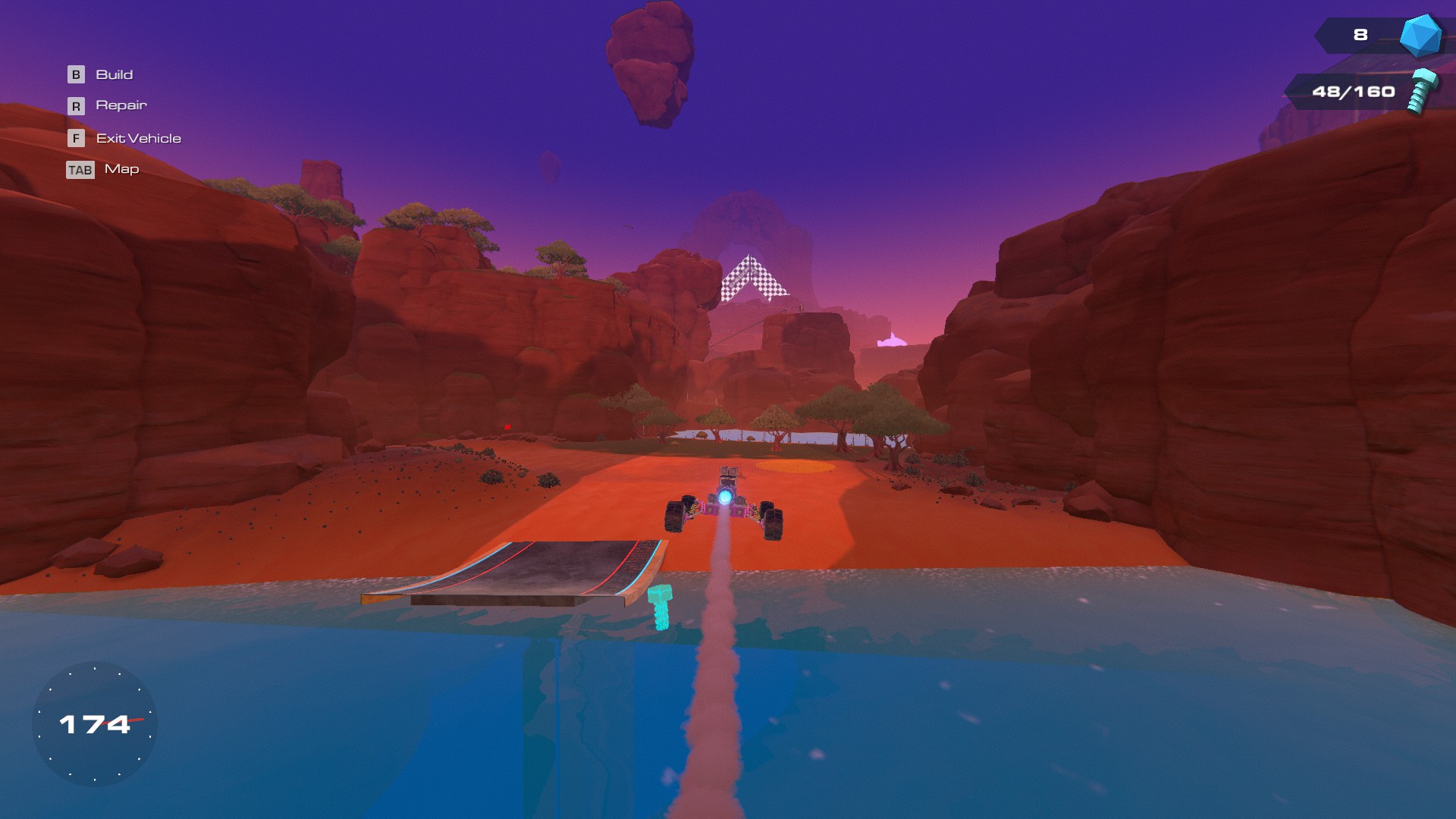 Trailmakers is a fun vehicle sandbox with pretty graphics and expedition mode to give you some goals. It definitely needs more work — more parts, bug fixes, control improvements, and more cool things to do — but it’s in Early Access, and many of these things are already in the works.

If you love tinkering and fiddling and building stuff, and you have an interest in vehicles, then you should definitely check out Trailmakers. For the right person it could hold many, many hours of entertainment.