Either stop being super vague about Aya or be ready to be stalked.

After Root Letter Last Answer was announced an interview with the president of Kadokawa Games, Yashimi Yasuda, popped up. I wouldn’t have mentioned this normally, but it did include some fun facts that I thought was interesting. While Root Letter doesn’t hide the fact that it was made to promote Shimane Prefecture, the characters who appear in Root Letter were designed after real people (with some of them actually being Yashimi Yasuda’s old classmates). After people started visiting and remarking that they were surprised that Nakamura Bar’s owner looked exactly like the character in the game, the idea of having a live action version was born. So it’s not that surprising that the live action actors compliment the original art. 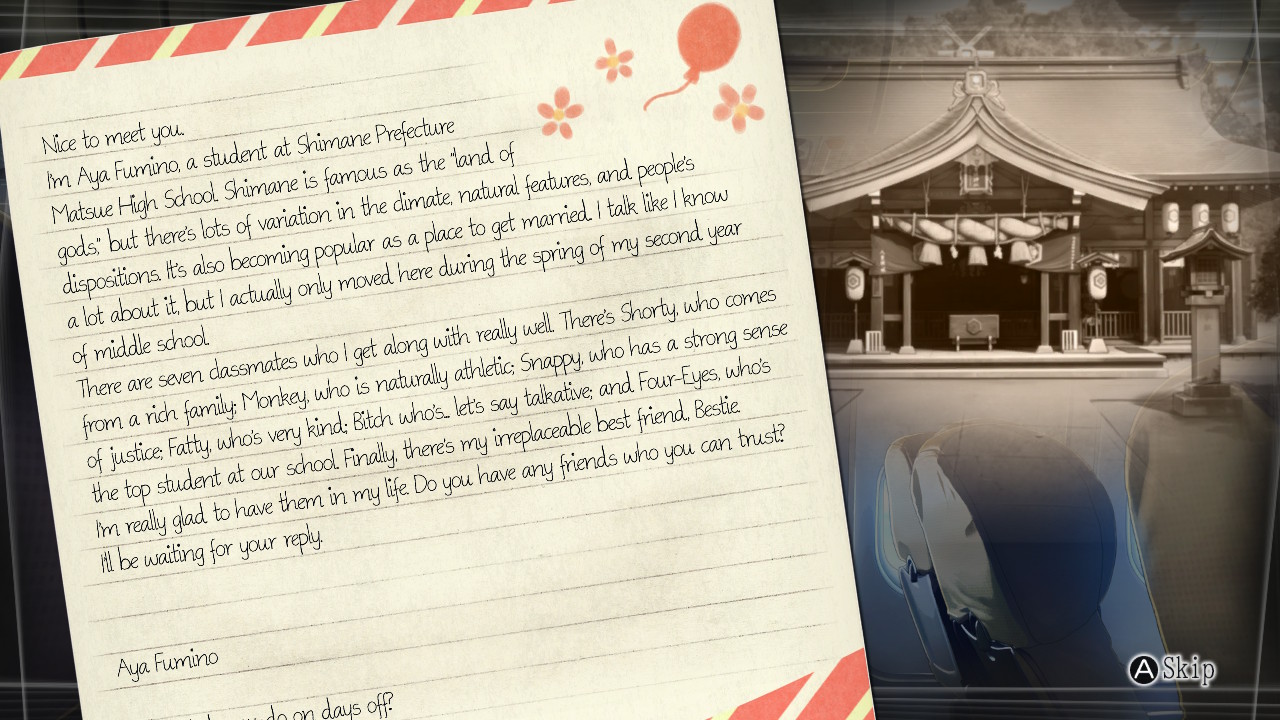 Root Letter Last Answer follows our protagonist after he quit his job he had for 11 years to pursue a new one. While he’s tidying up his room, he found a stack of letters that’s a blast from the past. You see, 15 years ago Max sent out an ad to find a penpal and a girl by the name of Aya Fumino replied. With each new letter, Max fell for Aya more and more. However, letters suddenly stopped after Max sent his 10th letter. While Max is reminiscing, he finds a tenth letter that has no postmark. Reading it immediately, it doesn’t seem to be a response, but a confession. Only saying that she killed someone and won’t contact Max again. 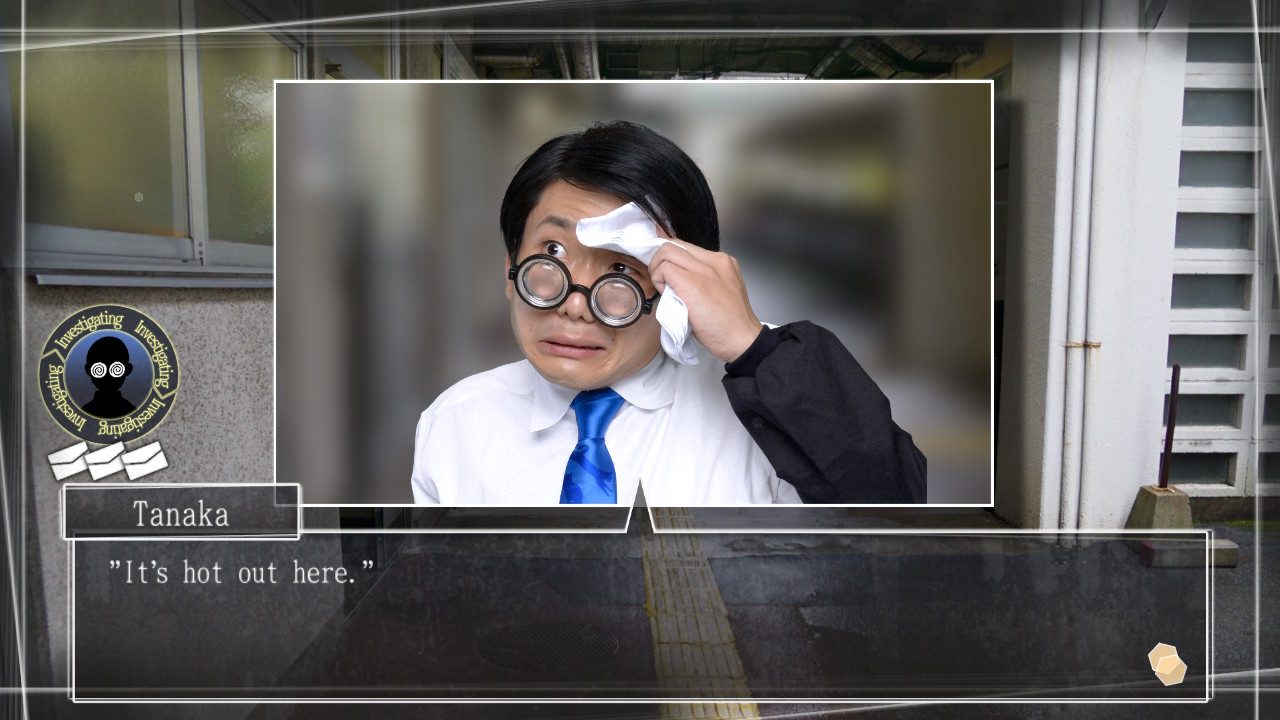 Of course, Max has questions and who wouldn’t after receiving a letter like that? Determined to find out the truth, and to finally meet Aya in person, Max travels to Shimane Prefecture. While you’re there, Max decides to read through Aya’s old letters with each letter more or less starting each chapter. After reading each one, he’ll also try to remember what he wrote back and you’ll be able to choose his replies (which also determines your ending). Considering that Aya wrote about her classmates, which she only mentions by using nicknames, Max decides to hunt them down. Though, Aya’s old classmates aren’t too keen on talking about Aya.

Apart from going between multiple locations and investigating scenes for necessary clues or items, Root Letter, there are two systems in place that you’ll use to persuade Aya’s old classmates. Once you gather enough information and confront said classmate, you’ll enter Investigation mode. Since Aya’s classmates refuse to admit they knew her, you need to provide them with facts so they can’t possibly wiggle away. This will have you asking questions or showing them an item at the right time. However, you can only make a few mistakes before they leave and you have to start all over. 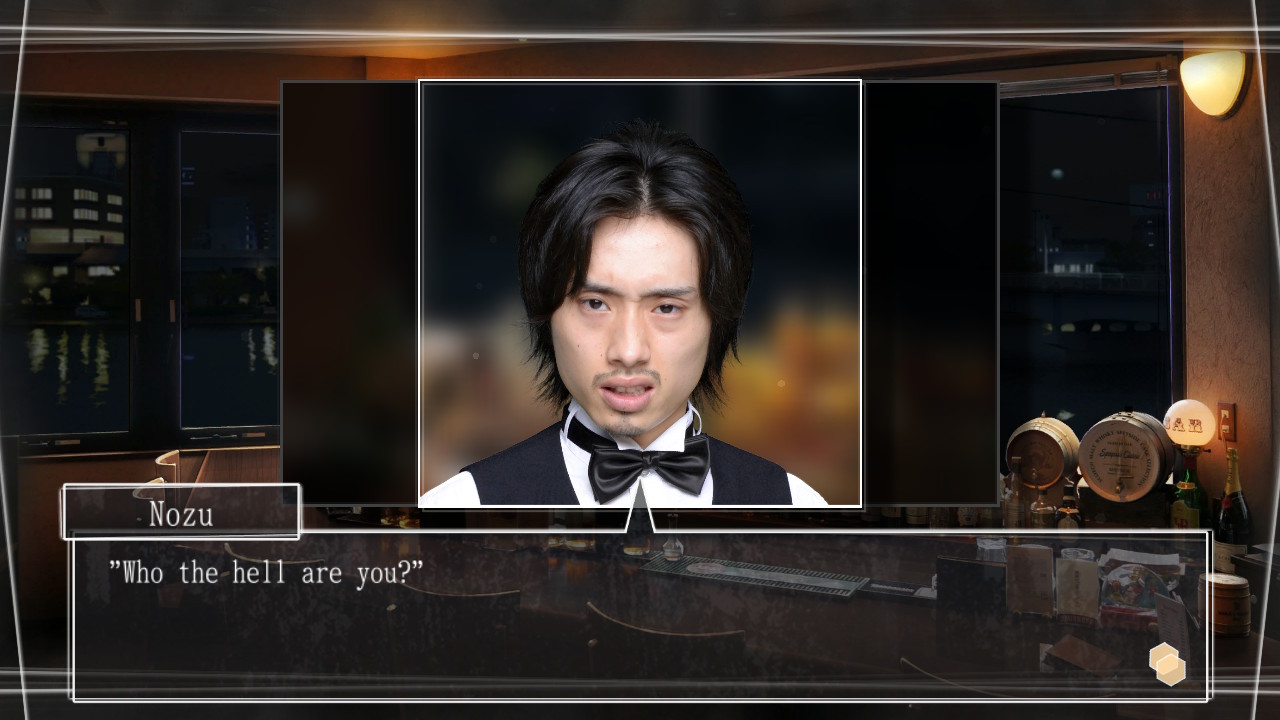 There’s also Max Mode that pops up during Investigation mode or while just talking to someone. Max Mode is a time-based minigame with a gauge that goes through phrases as it fills up. I could honestly go without Max Mode. I get that it’s used to convey Max expressing something strongly, but it does get slightly annoying when there’s not any clue to which one you should choose and when it has a tendency to reset despite it only reaching halfway. Not to mention that there are two instances where you have to wait it out (whether it’s to wait for a phrase that doesn’t show up at first or just do nothing).

I’m not sure if this only showed up on the Switch, but one area has a slight problem. During Chapter 2, you’ll visit TSK San-in Shuo TV to talk to Misaki. Before you can continue, you have to investigate the right poster that’s hanging on the reception desk. However, the hitbox for the posters there are off. Even when I was hovering over the right poster, it was actually investigating the left one. So if you’re playing on the Switch, make sure to put your cursor slightly more to the right here. 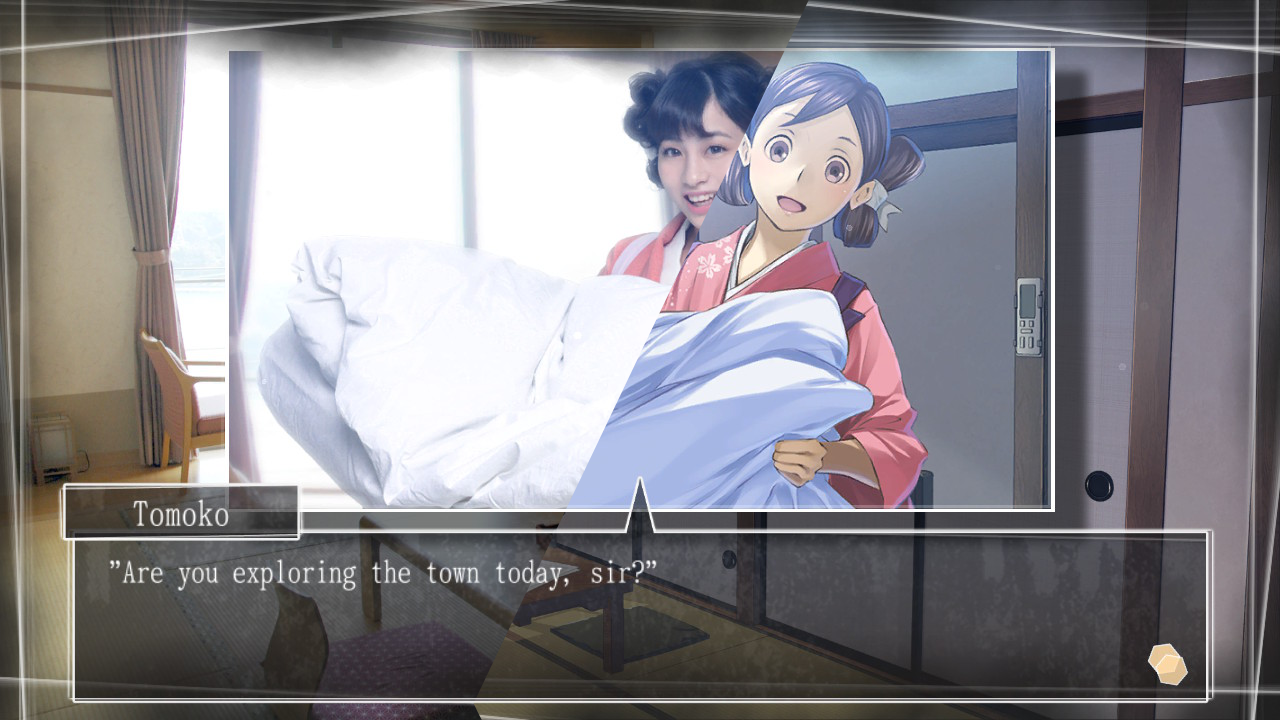 There are some new additions added in Root Letter Last Answer. Of course, we have the new live-action actors to portray the various characters (whether it be the seven main ones or just the characters you see for a minute or two) as well as some locations being updated with its live-action counterpart. Like mentioned at the beginning, the actors do compliment the original character designs. I did enjoy the new live-action mode, as it lowkey makes some scenes funnier, but at the end of the day, I do prefer the original artwork. Apart from this, the inventory was updated and I could swear some awkwardness in the script was also fixed. I remember encountering some awkward areas here and there when I first played Root Letter, but didn’t encounter any while playing Root Letter Last Answer. Also, while you would originally have access to only three endings on your first playthrough, it turns out that Root Letter Last Answer starts out with having four available. 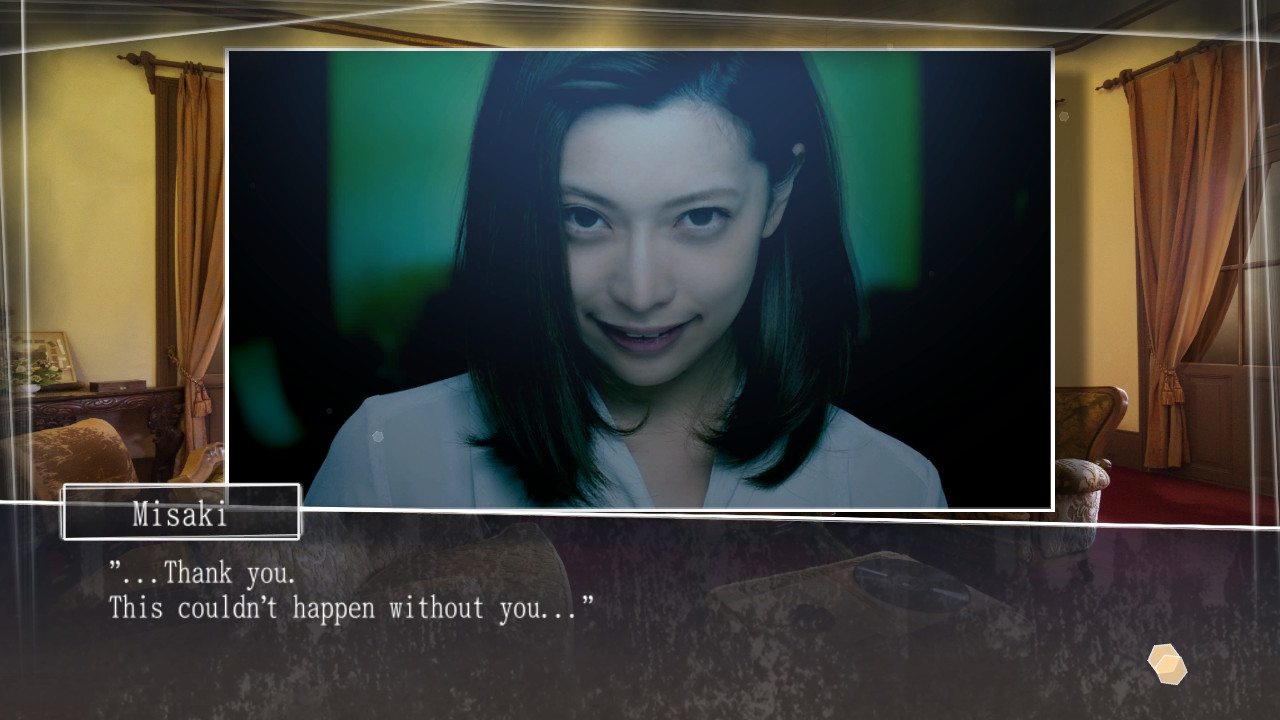 Lastly, we also got epilogues for most of the endings. The three endings that are considered bad (Princess of Himegamori Forest, The Cursed Letter, and A Government Plot) got an Answer Arc and are automatically unlocked after finishing all endings. Once you go through all three Answer Arcs, a Sequel Arc of The Bond Of Marriage (which pretty much is confirmed as the true ending now) is unlocked. I honestly can’t tell whether I like these new epilogues or not. On one hand, I did like how vague the bad endings were and the good endings pretty much implied what will happen in the future, but the new epilogues are so crazy. Even the Sequel Arc has a touch of craziness in it. Although, I did think that these new epilogues would have been integrated in (so they play right after it originally stopped or written in so it flows into it well) rather than it being a separate thing. Or at least unlock right after completing the route.

(Also the continuation for the Government Plot route doesn’t line up with how it originally ends, but it’s a pretty fun epilogue so whatever.) 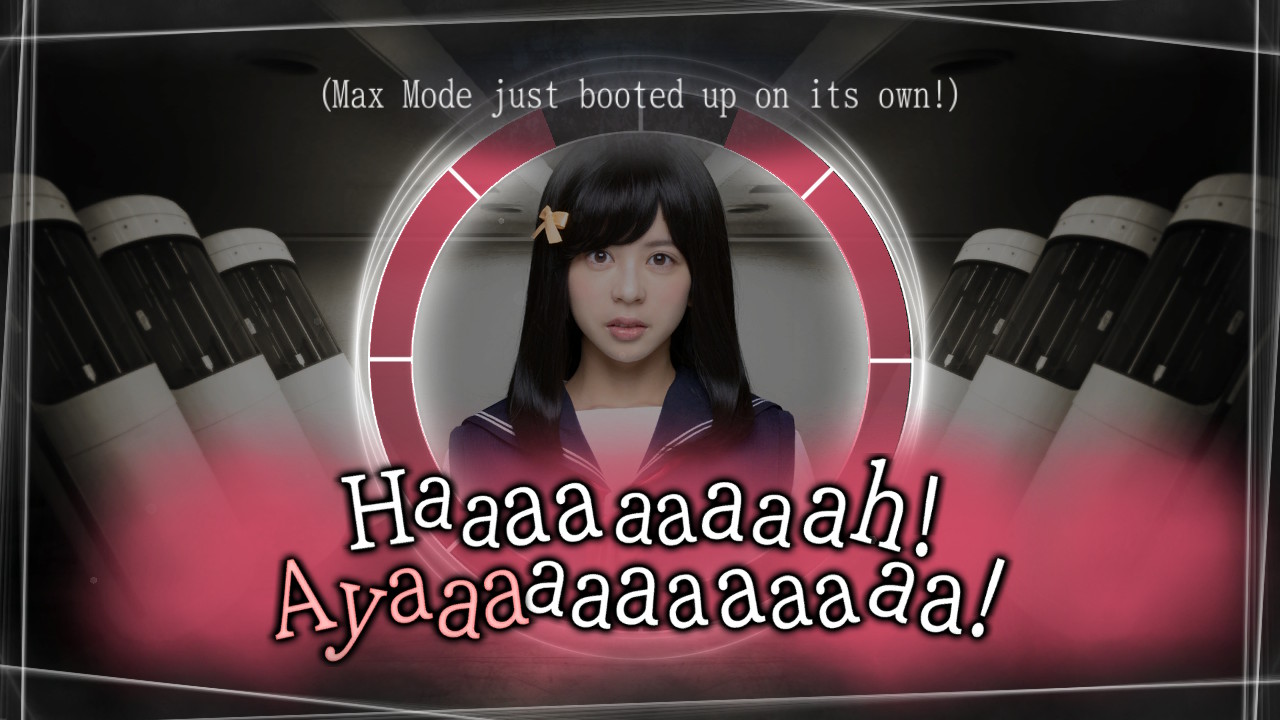 So the question is, is Root Letter Last Answer worth getting? Well, that depends. For those who already played through the original Root Letter, this might not be entirely worth it unless you want to see the sequel arcs and want a version with a live-action mode. And even then, I recommend waiting till it fades from your memory (unlike me who played Root Letter a month before Last Answer). For those who saw Root Letter as a decent, middle ground, visual novel, this won’t change your mind either. If you are new to Root Letter though, yeah it’s worth picking up Root Letter Last Answer. It’ll still depend on whether or not you want to pay extra for the live-action mode, but you’ll be picking up the enhanced version (if you do, I do recommend going through it with the original art at least once).

Despite personally thinking that Root Letter is a decent visual novel, the characters are well written and I did enjoy interacting with them (despite Max lowkey being terrible) and the mystery is good. If you’re looking for a visual novel that has a (mostly) chill mystery, pick Root Letter up in your free time.