REVIEW: Pantsu Hunter: Back to the 90s
Add comment
Share:TwitterFacebookRedditPinterestWhatsAppEmail 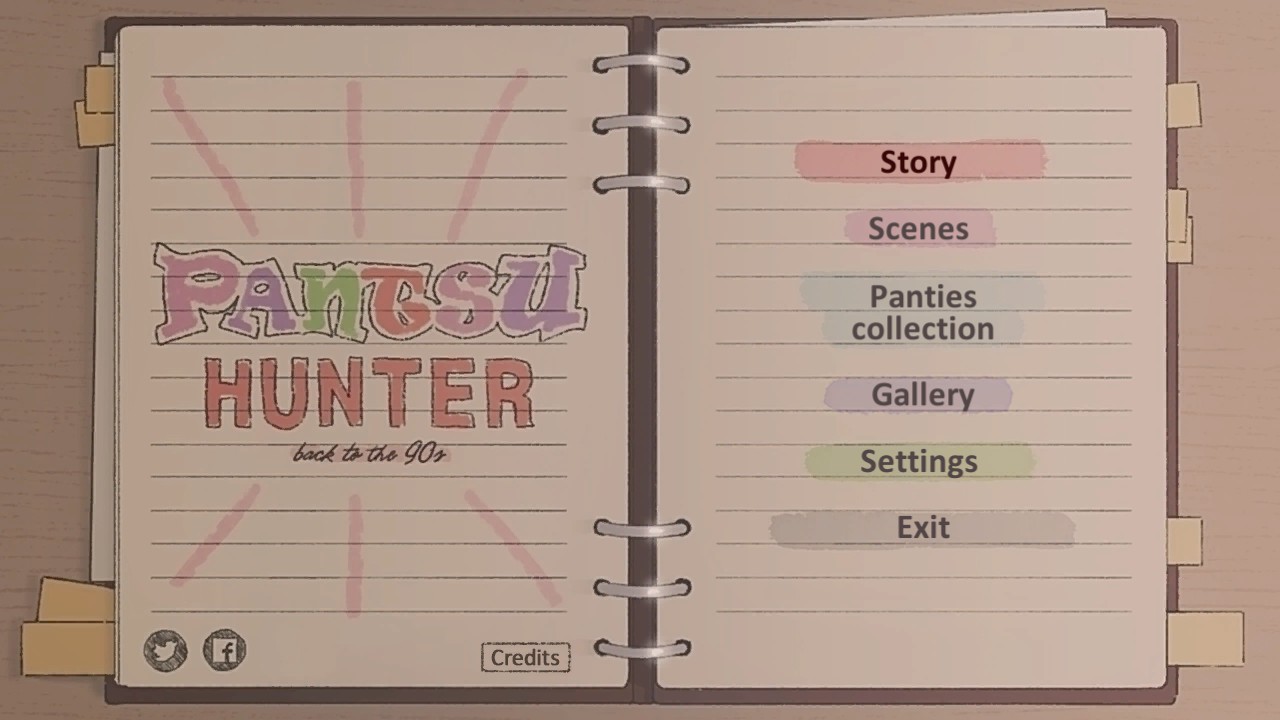 REVIEW: Pantsu Hunter: Back to the 90s

What your Pantsu says about you…

Disclaimer: Do not steal panties outside of Video Games and even then you need to think twice!
Or so it says and it’s kind of true. All the character designs have distinct visuals from that time. It’s incredible how things can change even though there’s a timeless element to it. The nostalgia factor is strong in this game but does it have more than that?

For those who aren’t privy to this little cultural appropriation here’s a short background about it. In the context of the game and most likely other Netizens it’s Weaboonese for Panties.
As a matter of fact, in Japanese, it’s just Underpants as it’s actually derived from the English word Pants. Shockingly, the new entry into the Weaboonese glossary was due to a particular anime or manga.
So there you have it. This is the secret behind the infamous Pantsu, the cousin of the infamous Waifu.
While we are talking about Waifu. Japanese people don’t use this word either unless it’s something in English.

The Story: Looking for Panties and therefore Love

Kenji Kojima is the name of our protagonist. An independent University Student who left the safety of his home and worked on many occupations. In fact, he has so much experience that he has become a Jack-of-all-Trades or also Handyman. For some things like good grades are the goal of one’s student life. Not for Kenji. After going through all those occupations, he has awakened a special ability. Ever heard of Sherlock Holmes who could deduce things just by looking? Well… Kenji has a similar skill but unlike Sherlock Holmes he uses panties to deduce the person wearing it.
Equipped with this extraordinary skill, he became a Pantsu Hunter. Somebody who collects panties. In order to find his one and only True Love.
So with the introduction out of the way let’s talk about the actual story. There are overall 4 chapters with an Epilogue. Generally speaking, you won’t get a lot of story in the Story Mode because that’s not the point. Though there are small tidbits at the beginning of each chapter introducing to why Kenji is going there, which is more like a briefing. The true endings also come with a short epilogue about Kenji’s thoughts on the people.
I’d say the real meat and potatoes lies within the character scenes that need to be unlocked. Those are showing some events of the characters life, giving them much needed additional exposition.

There’s nothing to write home about and the content feels paper-thin. If somebody told me it’s a prologue to something else I’d believe it. Despite all that, the price is already reflecting these facts and I think it’s ok to call it fair play.
My biggest gripe is that the character stories are separate unlockables, hurting the main story as you’ll be having a harder time to connect to them.
Then there is the last chapter, which should be the culmination of all chapters that came before it. There are different character endings but what hit me really hard was that all endings lead to the Retry screen. That is basically established as the Game Over screen. 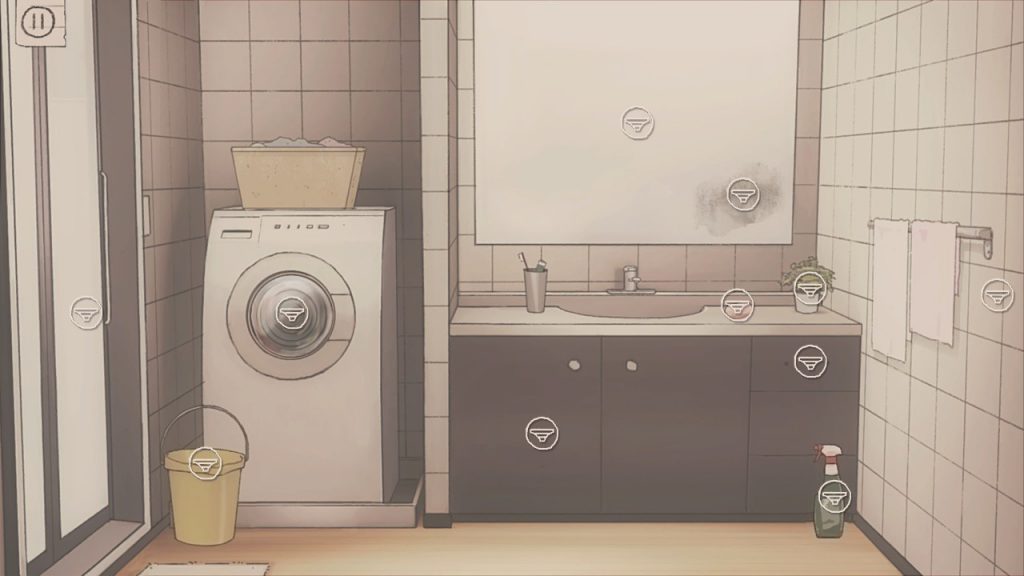 It’s a simple Point and Click, Trial and Error, Not-so-hidden-object type of game. The latter is because there is a button that shows all clickable things on the screen. There’s also a skip button to quickly go past texts to accelerate your repeated tries. There are also some time sensitive sections, to add another layer of gameplay.
The endings are not really endings but rather game overs or dead ends. The only notable ending is the true ending for each chapter.
None of this would be much of an issue if it weren’t for some strange decisions.

Which leads us to another thing.

Oh boy, there are a ton of User Experience issues when it comes to Pantsu Hunter. If this is intended as a back to the 90’s thing then, it’s not a good thing to have. Let’s pick a few issues.

Here’s what the game shows at the beginning: 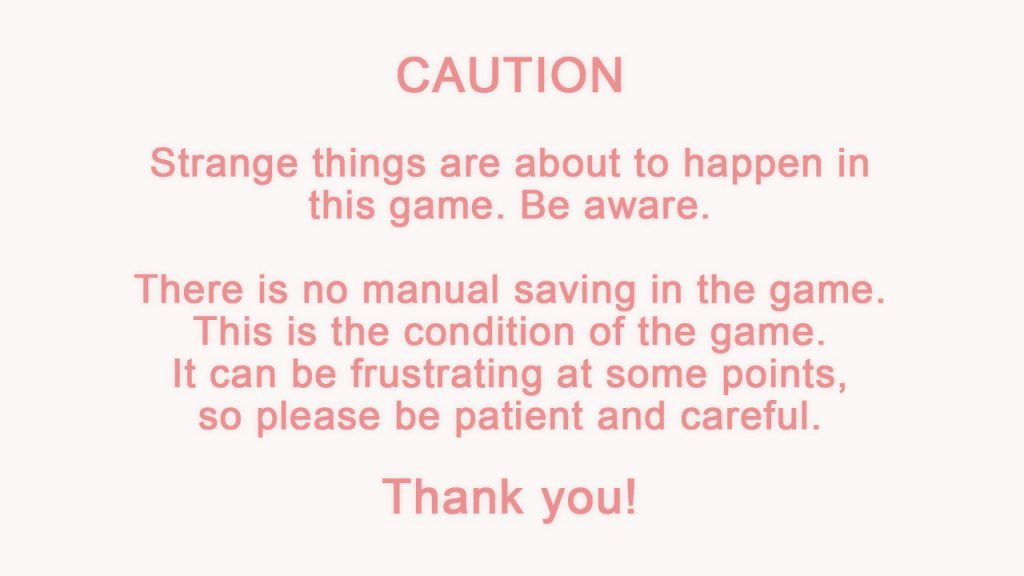 You read it right. There is no manual saving. You always have to start at the beginning of the chapter. Every. Single. Time. It’s frustrating and a real time-waster. In fact, it’s probably even intended as a time waster because it would be really short. Couple that with some random Game Overs, you might start to think: “Sigh, maybe it’s just not worth it…”

Next up are the Visual Novel features. 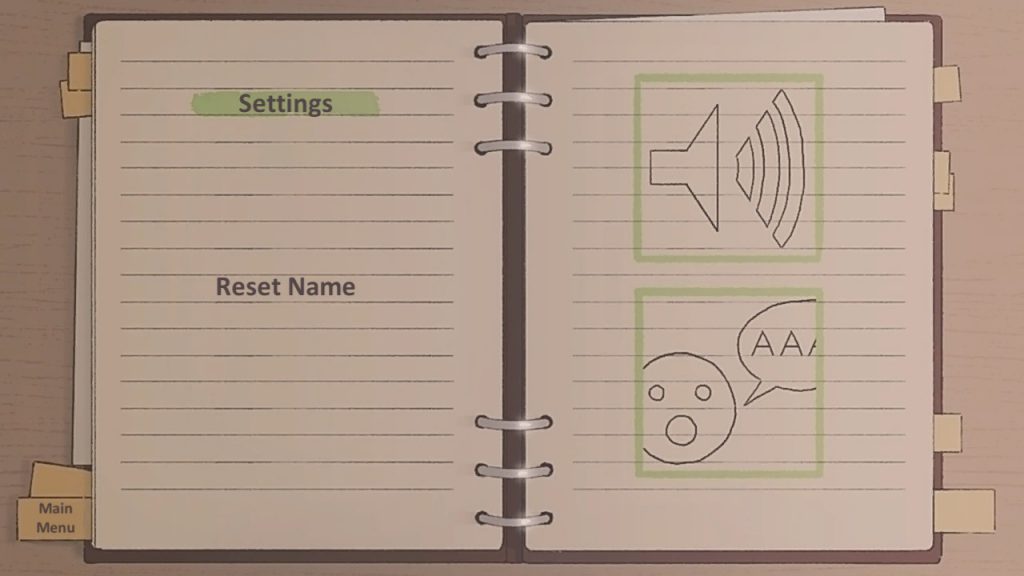 This is the Settings screen and I kid you not. There’s no text speed, text skip settings, animation skip or volume settings. Though there’s a text skip button on your keyboard (Z Key), it would have been nice to have an auto skip as most VNs have. Overall, it falls way below the average VN in terms of options and QoL features.

Then there’s the text. 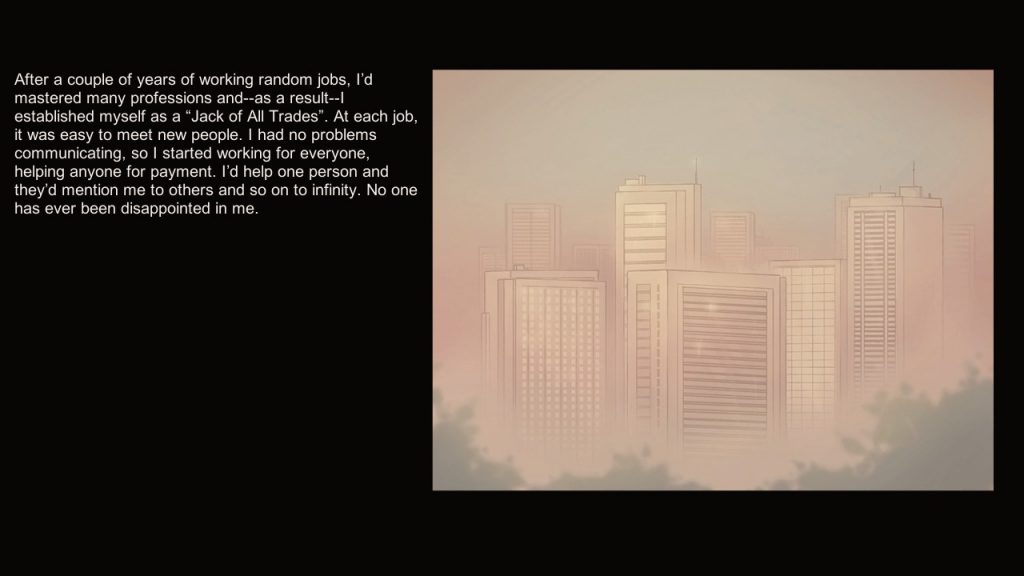 The small text makes it not comfortable to read. I know they’re trying to give the game more character by trying some visual things, but it didn’t work for me. 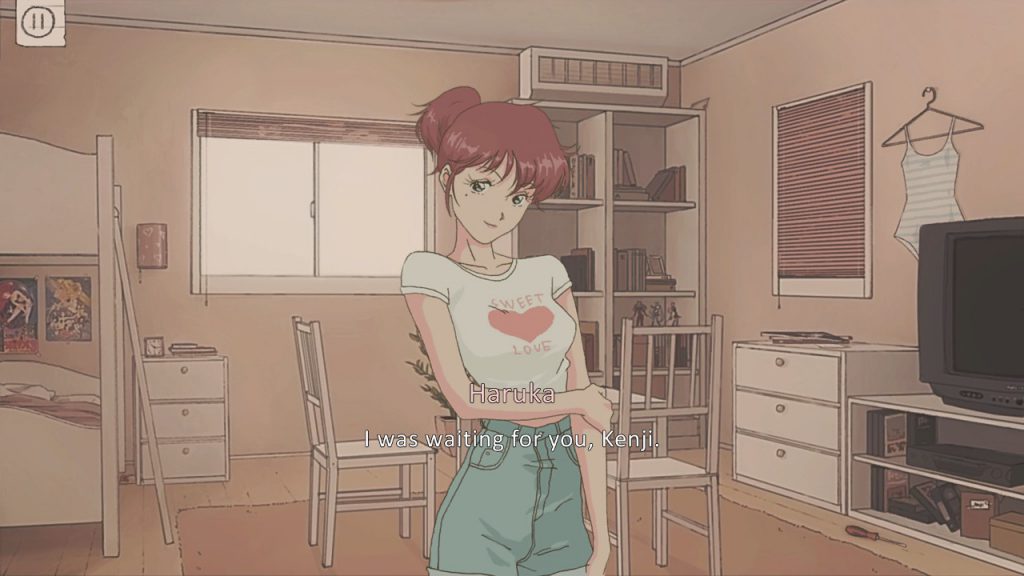 Then there’s no text box. Another issue that makes the text harder to read. Couple that with Exhibit 1 you get this in the briefings. 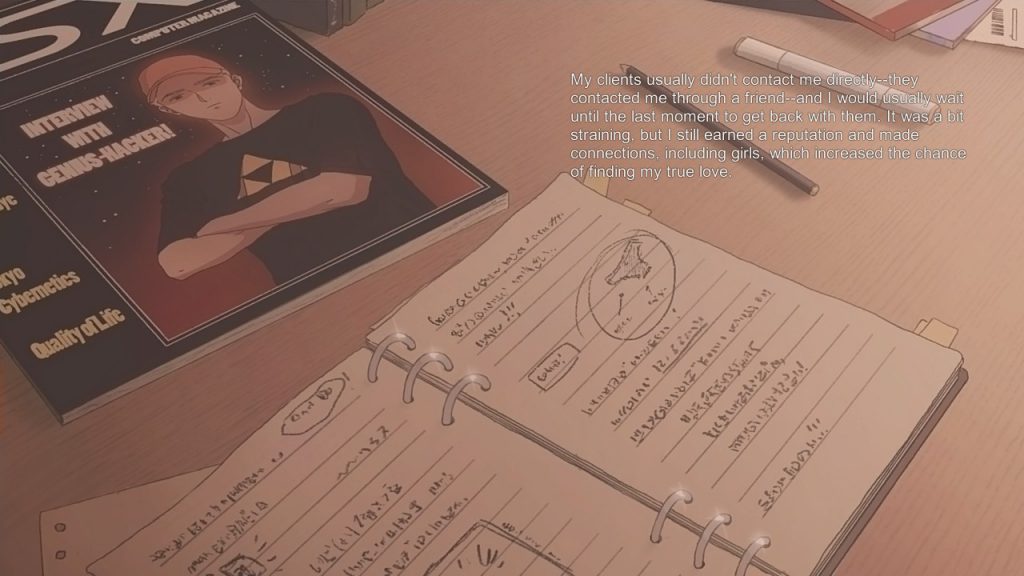 On the bright side, PC owners can find some hidden photos of each character. These unlock pictures in the Ero-Gallery. Don’t expect too much, it’s just a lingerie and bare boobs shot. But hey, it’s at least something.
While we’re talking about the Gallery, you can also find artworks you’ve seen before on there. They are automatically unlocked.
And then, there’s the Panty Collection. Not only can you take a look at your spoils but also read Kenji’s deduction for each of them.

The graphics are certainly the highlight of the game. The character designs are a real homage to older Anime and Manga like Golden Boy, Bubblegum Crisis, etc. The artworks look good too. The Backgrounds fit well within the aesthetics giving off a nostalgic atmosphere.

The music is simple, melancholic and just ambient. Supposedly created with an old Synthesizer to amplify the nostalgic feeling of the game. I think there are like 3 or 4 songs played throughout the whole game so don’t expect too much. Considering it’s a short game, one can’t say too much when it comes to the number of songs and all of them are okay.

Pantsu Hunter: Back to the 90s is an okay game with quite a few Quality of Life issues. The story has some interesting beats to it. Unfortunately, the gameplay has shown itself to be just simple and functional with a certain amount of frustration due to some weird decisions. Those decisions are holding the game back and create needless time waster and frustration points. The strong point are the graphics for sure and you can see that the developer put a lot of thought into it but I feel like the gameplay just can’t keep up.
Considering the pricing and what it offers, I decided to give it a Save for Later verdict because it’s only suitable for a certain niche.
If you like what you’ve read so far, go for it.