Why can’t my violin take me to another world?

We all have had at least one blah day where no matter what you do, you just can’t get yourself to do anything. Despite wanting or needing to, you can’t seem to get your creative juices flowing or just not feeling it. It can be even worse when you know what to do, but everything just seems to be going wrong. This is exactly the type of day Viola’s protagonist Viola is having. We join Viola in the middle of one her violin practices. She’s trying to play along with a Bach piece, but despite knowing which notes she should hit Viola can’t seem to keep up. After trying a few times, the frustration that must have been building way before we joined overflows. The many times she failed has chipped away at her and Viola gives up. Little does Viola know, her violin has something else in mind. Before Viola can put up her violin for good, it unexpectedly opens up a portal that sucks Viola in. 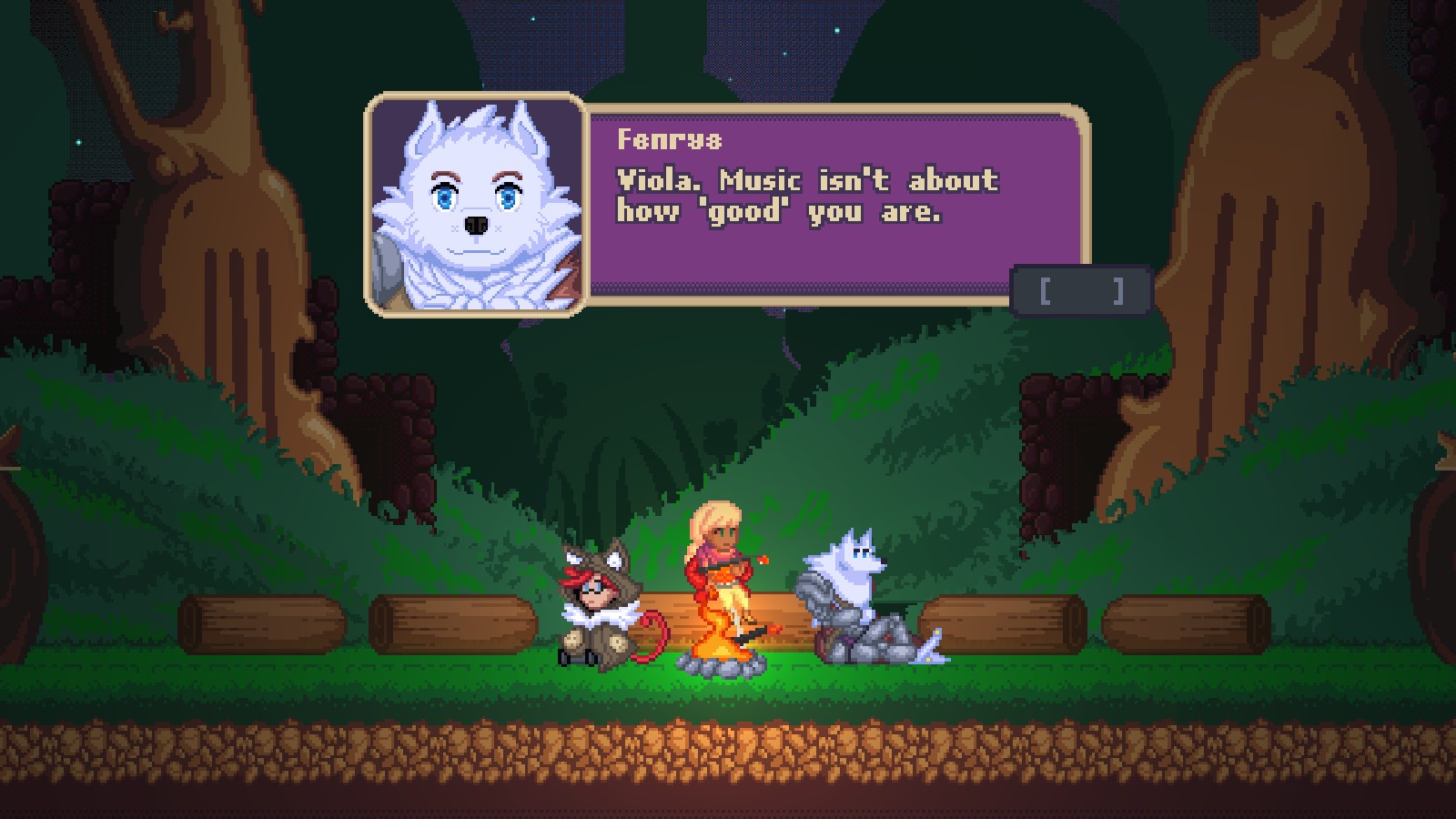 This portal leaves her at the end of a cave and it doesn’t take long for Viola to run into danger. Luckily, she wasn’t the only one present in the cave as she is soon joined by a wolf-man named Fenrys. At first, Viola doesn’t exactly accept his help, but after seeing how he didn’t leave her behind and that she doesn’t know this new world, she welcomes it. It turns out that this world, aptly named Vylna, revolves around music. It seems like every resident plays an instrument and some situations call for a certain song to be played. Even the trees are shaped as violins (which I can also imagine is great for making instruments). Viola is quickly joined by Fenyrs’ friend Niko the cat, who might have some insight on what’s going on, and later on Soleil the knight and the harpy Momo (who actually just got added in). Together they’ll figure out how to get Viola back home. 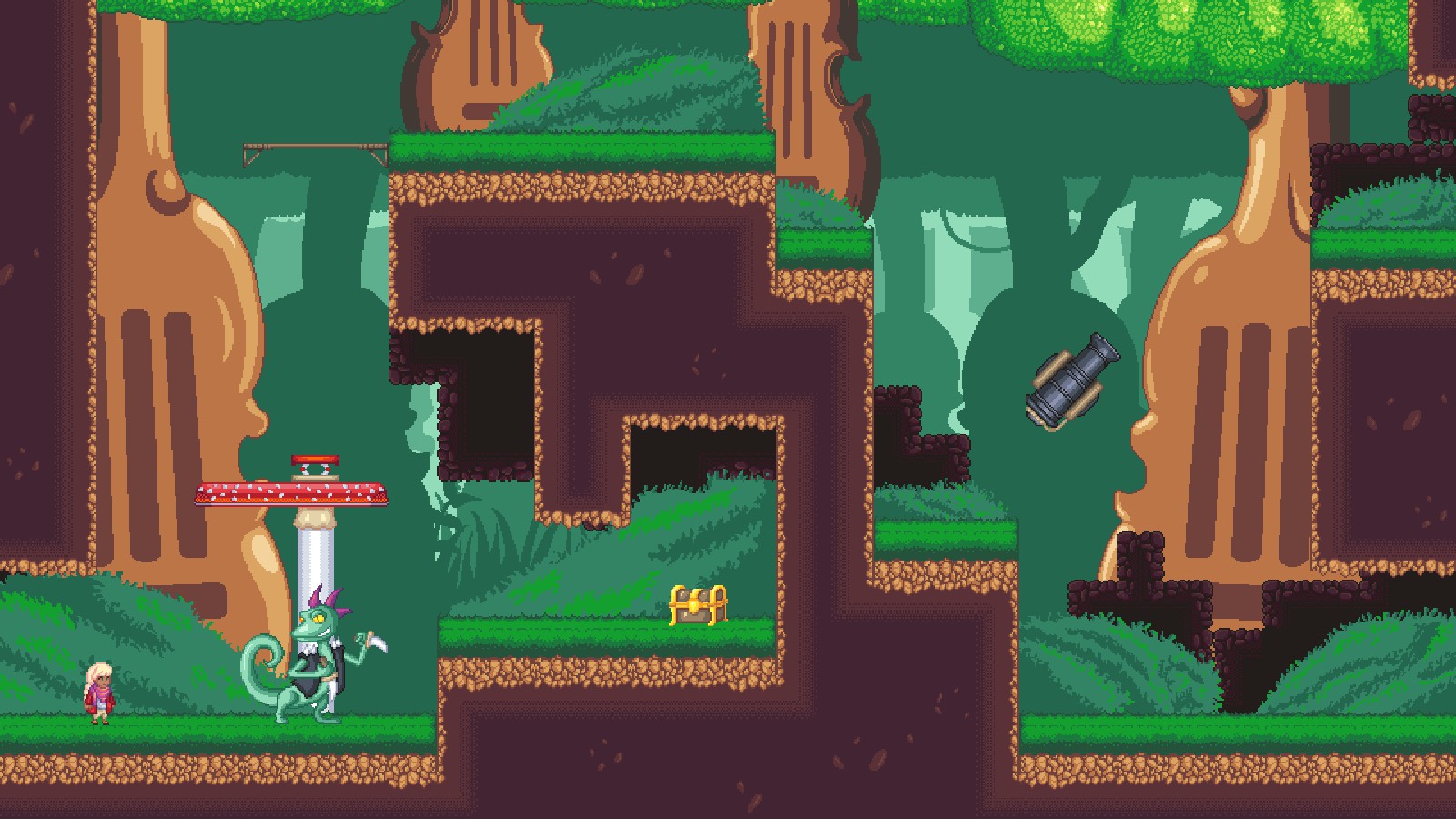 Viola mixes together side-scrolling platforming, turn-based RPG battles, and rhythm based combat. The platforming is, obviously, used to explore the world around you and it blends well. This aspect won’t give you much trouble other than needing to know when a certain platform calls for a double, or triple, jump. There are also springs and cannons around to help you explore every inch of a level. As you’re opening chests, you’ll find various potions and gems that boost stats in exchange of lowering one when equipped. If you’re someone that hates random encounters, no need to worry here! Each enemy encounter is represented by an enemy hanging out. If you’re not feeling like fighting, the levels are designed in a way that you can go around some of them. 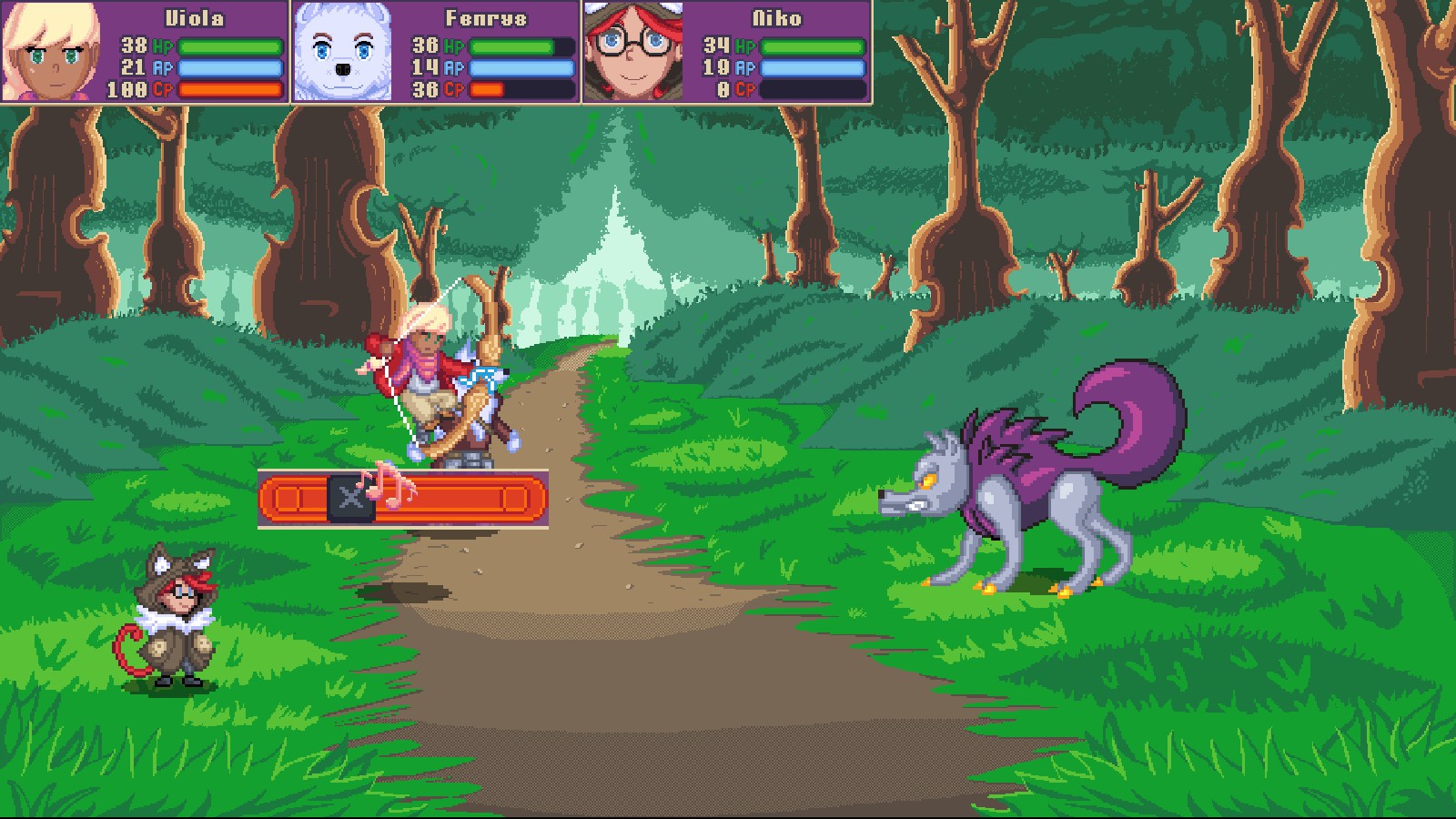 When you do get into combat, you’ll quickly find that it’s rhythm based. Regular attacks will have you match two buttons to increase your attacks power. The more accurate you are, the more you’ll hit your enemy. It’s a little different when you use magic. Each character has their own set of spells and seemingly specializes in an element (which an enemy can be weak to). In addition, there’s two different types of spells, regular Magic that uses up AP and Crescendos which uses up CP. Interestingly, while you can restore AP with a potion, CP is gained when a character takes damage. Anyway, when you cast a spell you’ll have a series of prompts that you’ll have to input. In addition to pressing the buttons on time, you’ll also may have to mash or hold it to correctly cast. However, if you miss a prompt the spell will fail. Luckily, AP and CP isn’t used unless you successfully cast it, but it does waste a turn. 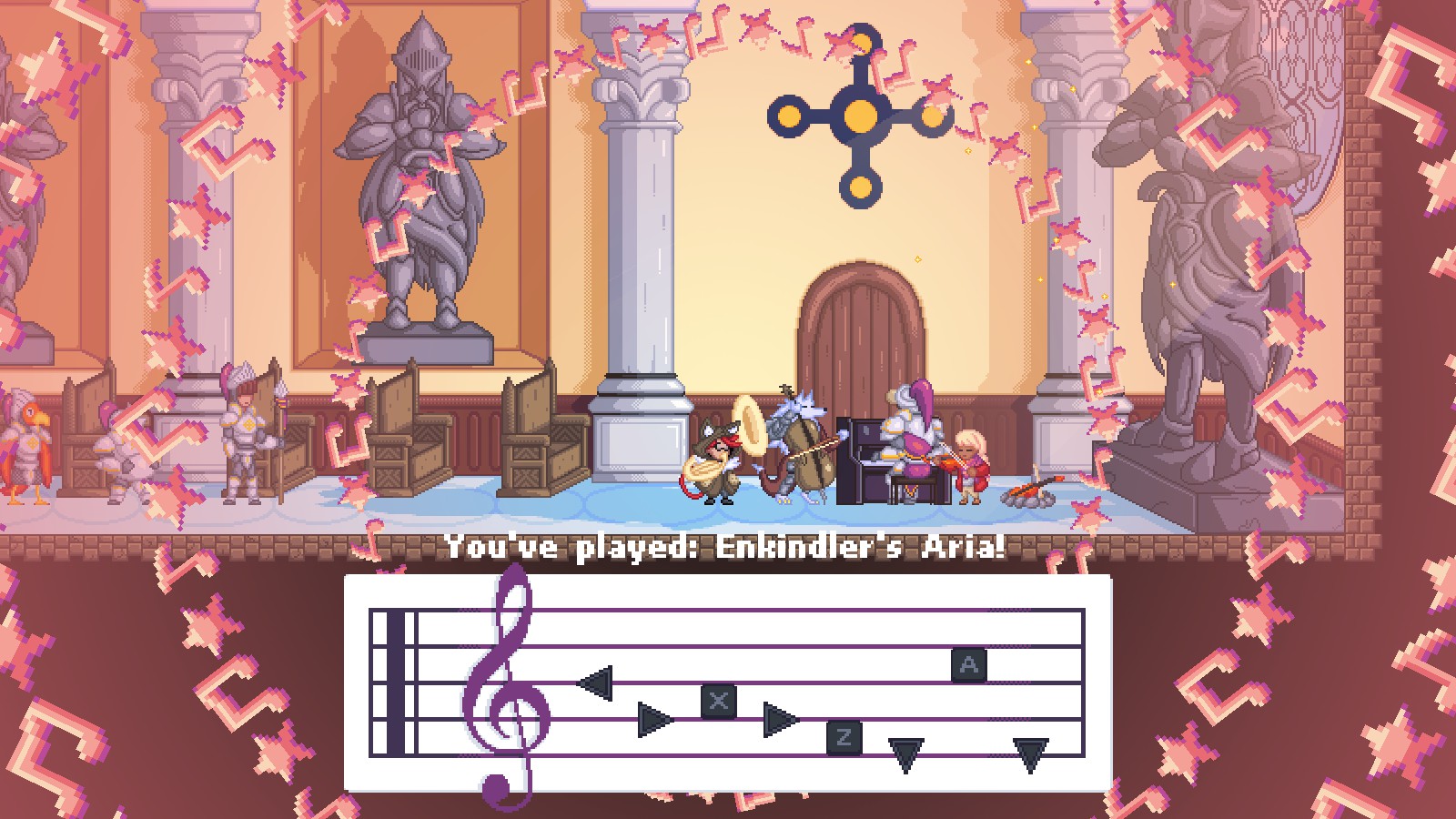 As I mentioned before, the world of Vylna revolves around music. Along Viola’s journey, she’ll learn essential songs that have their own effect. After she learns them, you can then go into her songbook to play anytime or open it at areas that require them if you don’t remember the song. So far, only a few situations call for a song. Some doors and a magical fire (aka a Wishfire) require a specific song to be played. The Wishfire in particular is a temporary camp that protects you from enemies and heals wounds. This also lets you talk with your teammates to get to know them better or talk about the current situation. This increases your bond level, which is rewarded with a new spell, so I wouldn’t recommend skipping these.

In a recent update, a new song was added with a hint of why you should use it. This new song basically summons a bird so you can fast travel to previous levels. Sadly, this seems to have a chance of sending you to a black screen right now. Nonetheless, a hint of why you will use it was included in the new level. The emerald cavern has a broken shrine that has its emerald shards hidden around Vylna as well ass introducing us to another cat named Robin who owns a shop in the sky.

With Viola being a recently released early access game, I don’t doubt that there are concerns over how often updates will come along. So far, it does seem like regular updates are planned. So far, three updates have gone through with one being a major update (i.e. adding in a new level). Once you get to the end of the current build, it even shows the estimated time when Viola’s adventure will continue (which I believe means the next major update). This brings up to the next question. After any updates, will you be able to continue where you left off or will progress be reset? Well, the plan is that you’ll be able to continue where you left off. However, once you do reach the end of the current build, you won’t be able to go back and explore more unless you restart.

Something that was really interesting and unexpected was that Viola felt like a complete game. So far, nothing seemed to be missing or lacking some features. It’s just that the story ends early as the next section is being worked on. 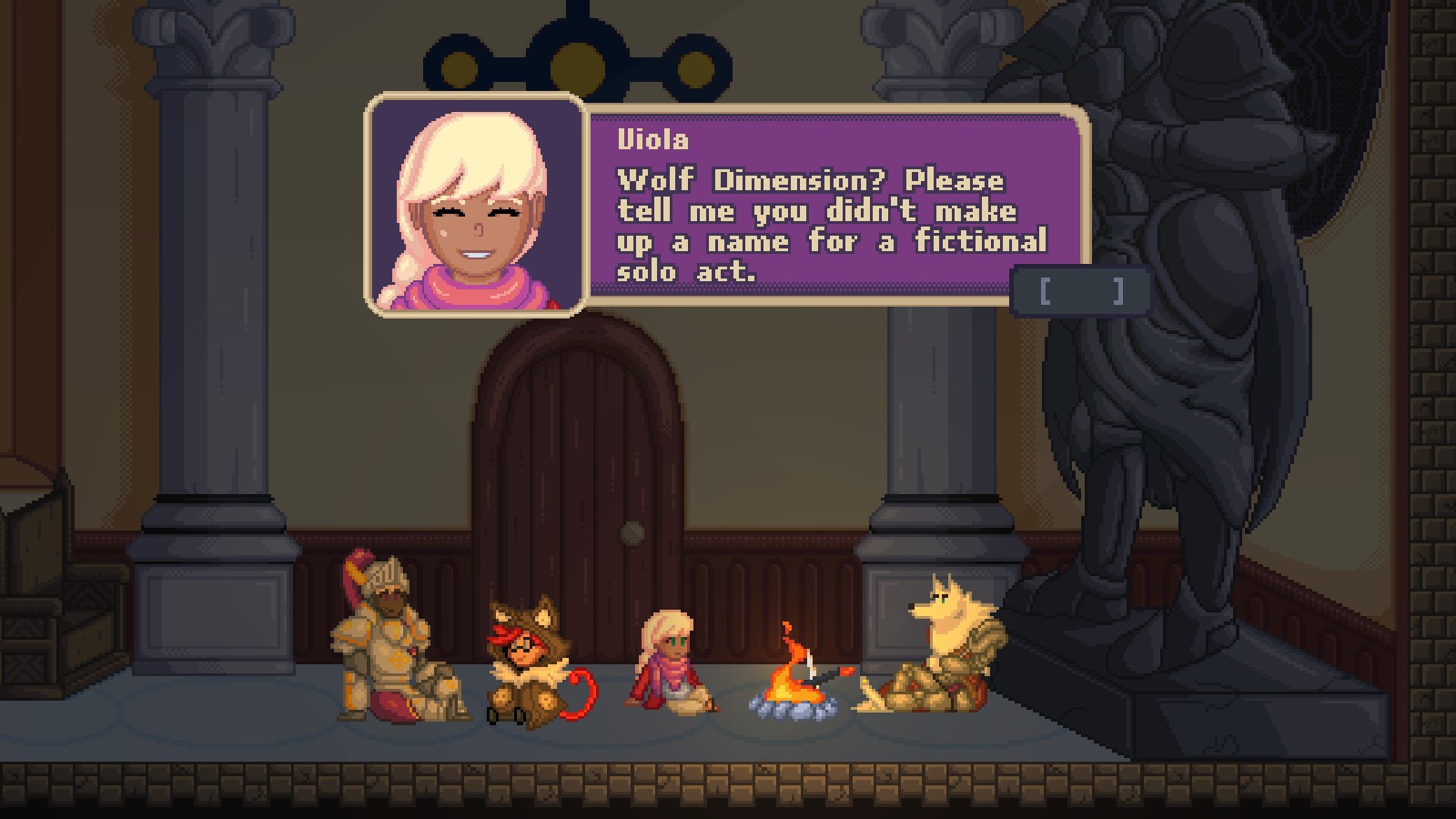 A good sign of an Early Access game is that it makes you want more and Viola does just that. The whole time I was playing I was having fun as I explored and fought the various enemies scattered around. I loved how the other characters are supportive and want Viola to be more confident in her violin playing. It also helps that I do relate to Viola in some way. Not just in the fact that I also play violin, but I’m not all that confident. While Viola still has some ways to go, it is worth picking up. It’s a very promising early access title and I honestly can’t wait to see what’s in store for Viola and her little gang.