Attack on Titan 2 expands into the third Season.

AOT 2 FB is a huge DLC for newcomers. Big expansion for veterans.

If you haven’t read dangerhighdoltage’s review on the base game of A.O.T. 2 I recommend you to do so, even though I’m offering a second opinion and continue with the expanded content. It’s not just a simple DLC but a classic full blown expansion that adds a lot of new things. You’ll find the Anime Attack on Titan Season 3 content, a retroactive expansion of Anti-Personnel ODM aka guns and yes, you can use them in the original Story Mode as well as a whole new Gameplay Mode. It sounds like a lot, but that’s not the only thing if you look at the price of the upgrade, which is only slightly short of the full game. This brings us to the big question: Is the expansion worth it? 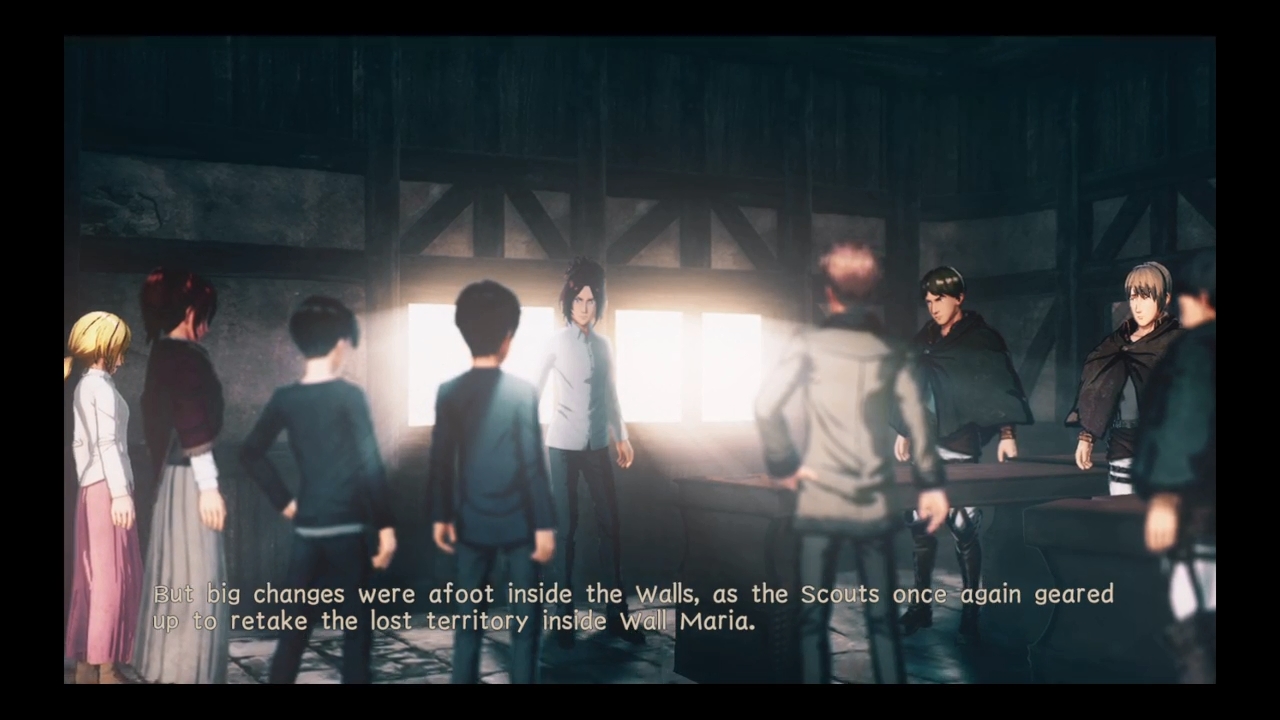 From the perspective of someone new to Attack on Titan, the series is an entry to a more somber story than most in the current landscape when you compare it to other Manga/Anime like Gantz or Terraformars, where you are at the wrong corner if you’re looking for a feel-good story. So what’s it about? Attack on Titan plays out in a world that has humanity protecting themselves inside a walled garden with multiple walls. The reason? No, it’s not a zombie catastrophe. It’s something worse, much worse: Titans. Huge humanoid monsters that like to snack on humans.

There are two parts to this package: The base Story and the Character Episode Season 3 expansion that comes with Final Battle.
In the Story Mode, you can create your own character who’s following the protagonists across Season 1 and 2. As a victim of one of their invasions, you’re ready to put your life on the line to butt heads against the Titans. Beginning as a cadet at the 104th, you train rigorously for years to graduate and join one of the three corps. Obviously, you’re not someone who likes to sit around. The frontline is where you focus your attention. Unfortunately, Training and Reality are two things that can’t be more different. Even the first missions are proven to be a nightmare with surprising twists and turns.

The Character Episode Mode ditches your created character in favor of focusing on the main characters such as Eren, Mikasa, and more.
Following the events of the base Story Mode, sans the custom character, things are heating up. Our heroes are not only finding out more secrets about the Titans but also other things that are equally dangerous. While the hunt on their nemesis Jaw and co. still rages on, a Coup d’etat, new Weapons, new Information and more are awaiting you.

Overall it’s a gripping story that tells of a grim situation and it keeps throwing you curveballs proving that outside of a few characters, nobody is safe from death. Add politics, the mystery of the Titans, the character challenges, and growth and there you have a something that proves that the worldwide success wasn’t a fluke. The good news is that the advances in the story also have implications on the gameplay side. 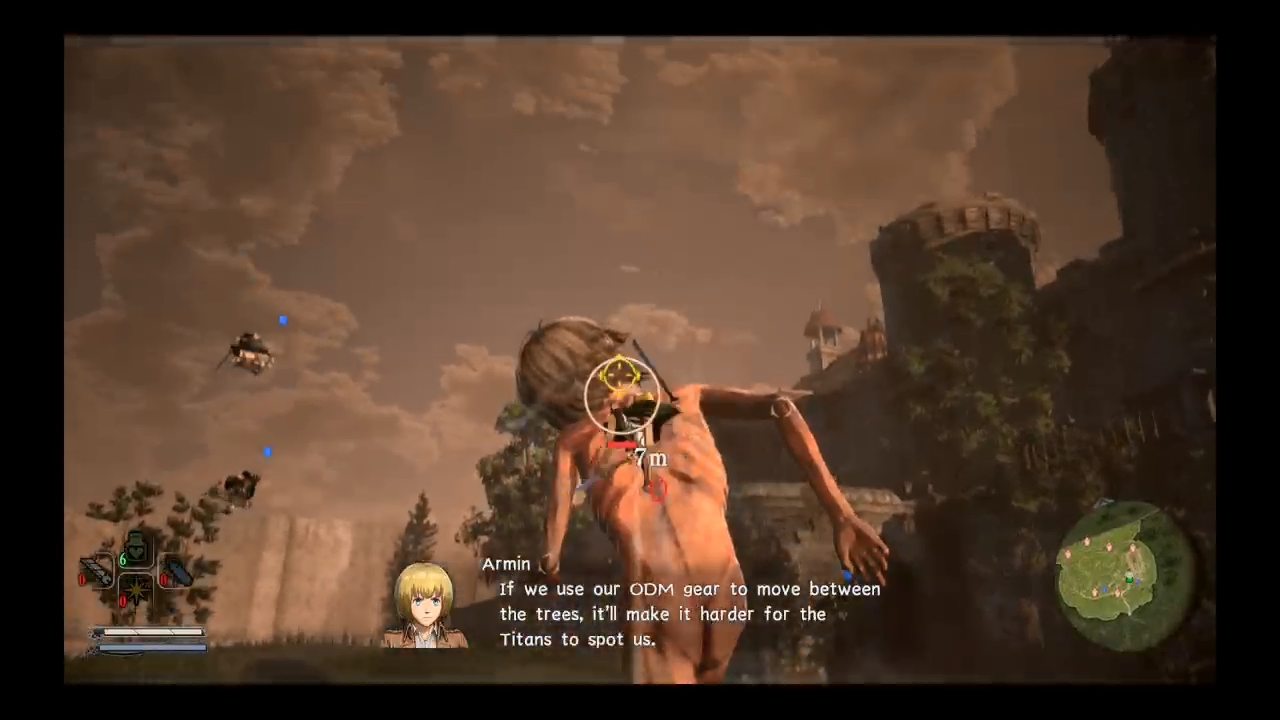 The gameplay flow is separated into story, intermission, and battle. Most of the time you’ll obviously be involved in a battle, so this is where we take our jump into the game first.

As the story implies, your fight will be against huge enemies of immense power. Humanity’s ingenuity manages to level up both the swordplay and movement to give themselves a fighting chance: an apparatus called an ODM and super hard swords that can actually cut the Titans. What’s the ODM? They are gas-powered machines with grappling hooks which increase mobility to the equivalent of your favorite web-slinger, but this time it’ll be used for lethal purposes. On top of this, you have the ability to do an air jump as well as an air dash. With the power of the ODM, you’re able to travel fast across the map above, in or between buildings, or canyons or caves while slaughtering your way through Titans.

It might sound awesome but there’s a certain caveat for both of them. Resource Management. The ODM runs on Gas while your weapons can break. Fortunately, you can carry some reloads for both of them, which is why you try to keep your supplies at a good level. How do you get your supplies? The answer lies in bases. There are base spots spread throughout the map. On these spots, you can decide to build bases with various specs. They can be attack towers, bomb traps or… you might have already guessed it Supplies. These supply bases fill up your resources according to their level and have a cooldown before you can go back and get them again. Now back to Titan slaying.

The ODM enables you to maneuver around the Titans so you can attack their weak points, which is the area around their nape. If it’s still too difficult you can slice and dice their limbs to incapacitate them for an easy pick off and gaining some extra materials. Be careful, those limbs do grow back if you take too much time.

It sounds easy at first but there are a lot of button presses involved in this. First, you activate the targeting, then you need to line up your attacking angle while manually accelerating and then you still need to time your cut. That’s a lot to take in and maybe even too much… On top of that, each Titan has an awareness of you. You could also call it aggro in specific terms. When full, they enter into a frenzy and are specifically targeting you with new moves. Try to stay clear of this state by killing them fast or use Stun Grenades to reduce the awareness.
You’re also not alone on the battlefield. There are other mates that you can put on your squad to give you support. As the leader, you can call them in for additional support. The only restrictions on them are cooldowns. Higher rated characters even tend to have their own attack sequence to spice things up but this comes at the cost of longer cooldowns.

Adding everything up you can find it too overwhelming. Just like me. I have good news for you! With the Final Battle expansion, they introduced an optional easy mode that simplifies that attack sequence into lining up and reeling in to cut. Gone are the days of mistiming your cuts if you want it to be like that. 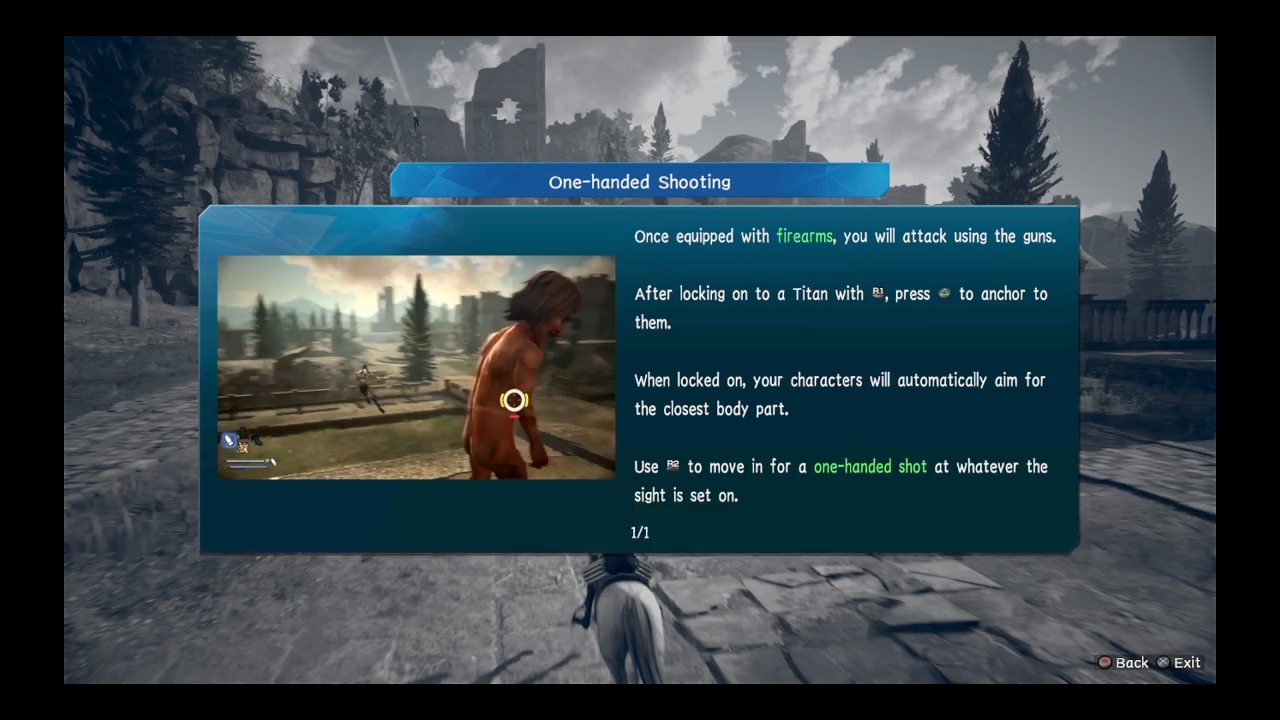 Which leads us to the next topic: The Final Battle Gameplay expansion. If you’re getting bored of cutting up the Titans you are now able to switch to guns. There is an option to decide it before the mission or switch at the supply bases.

Instead of taking it up close you can now attack from a more safe distance. There’s a little twist to gunning them down. By targeting body parts there is a short period of time where you can deal a critical hit. This special time activates each instance when you switch your target or make a big maneuver with the jump button after anchoring. If you’re feeling especially lucky, you can opt-out of anchoring and attack directly while dual-wielding your guns. 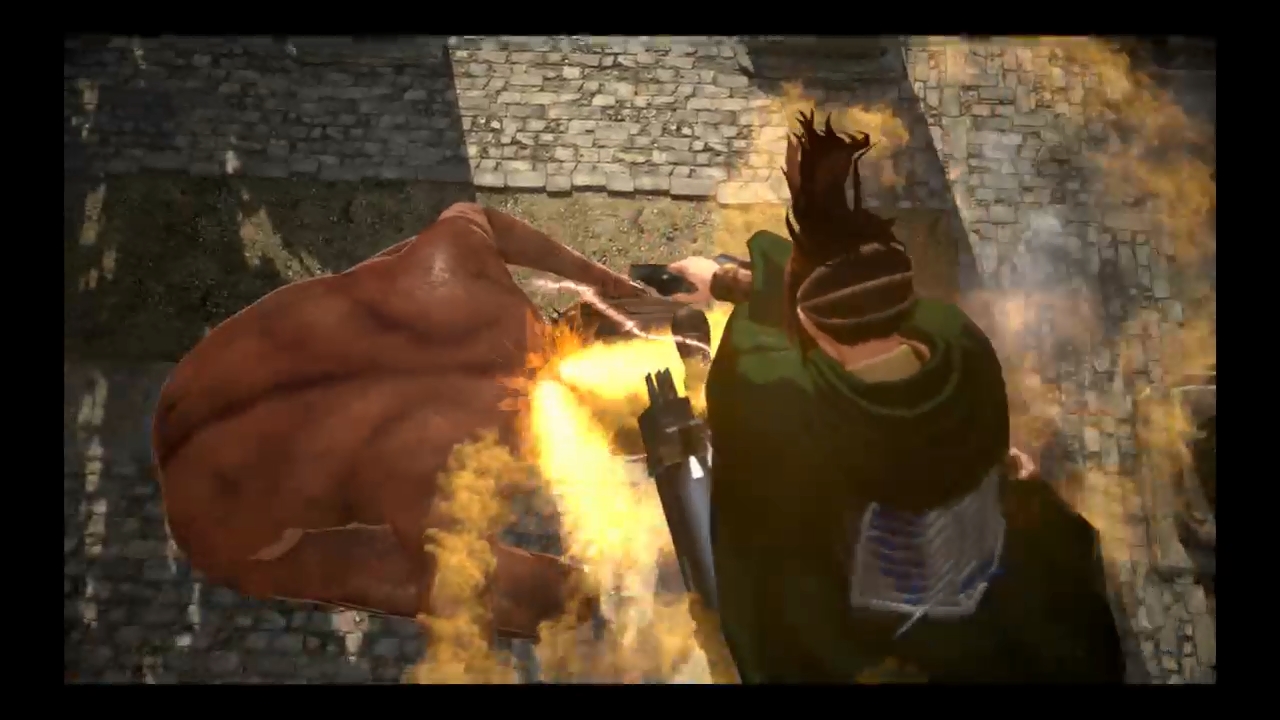 The next gameplay expansion offering is the equivalent of a superstate that can be accessed by completing sub-missions. This is also known as supporting your comrades in a time of need with green indicators. What does this particular state entail? New Limited Weapons! If you’re using melee weapons you get Thunder Spears that are explosive long-range weapons and it literally blows them up and away. There’s even a second attack that depletes it faster but does a lot more damage. Guns, on the other hand, are Gattling Guns that deliver a steady flow of damage.

One might think that rinse and repeating that process will get boring and that’s what I thought too, at least until I found myself playing it for hours. Contrary to my expectations, it doesn’t get old. Swinging, slicing, and gunning the enemies down is a lot more engaging than you might think. The presentation probably plays a big part in it too, but that’s a story for later.

We’re done with the fisticuffs gameplay and now switching gears to talk about the intermissions. This is where most of the RPG elements are playing their part. By getting close to different people you can unlock new skills that you can equip. The higher your level, the more skills you can equip, going from basic Stat buffs to special attacks for specific situations. Therefore, the gains are twofold. You get new skills and you get to know the different characters. You’ll be able to upgrade your weapons with the gathered materials or train up your character later on. At the same time, you can get access to online areas and some Titan mini-games where you can go around and go snacking on Aristocrats and Citizens.

Moving away from the Story, Final Battle also adds a Territory Recovery Mode where you’re on a campaign to push back the Titans and recover the lost territory. There’s a lot to do like managing everything and recruiting new members into your squad. Those who are looking for a story won’t be finding that here. This is pure gameplay where you can pretty much create your own dream squads. 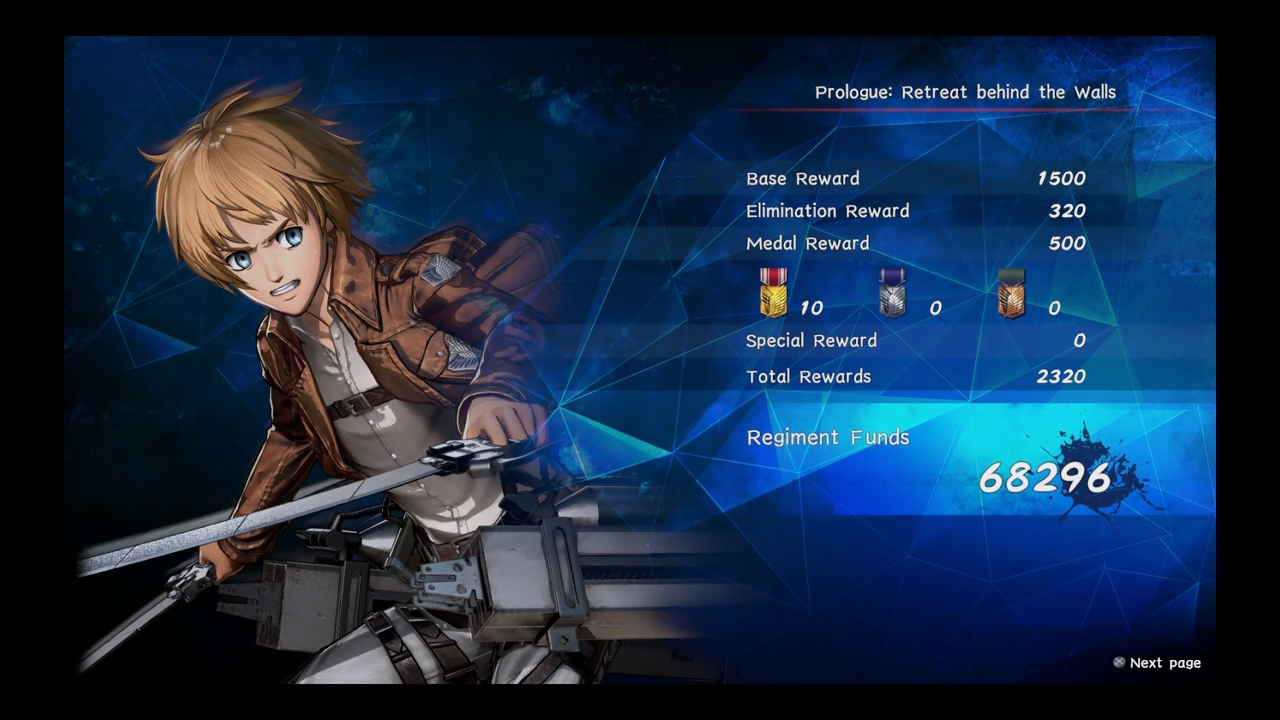 For people who already know the story until season 2, I recommend jumping into Character Episode Mode first because you can get resources from playing it while all missions and characters are fixed as well as getting ease in for the newly added Guns. All of that can be used in Story Mode.
The gameplay checks out with engaging action and a story that covers the major plot points. When looking at the complete package it’s no exaggeration to call it formidable with a ton of potential playtime. 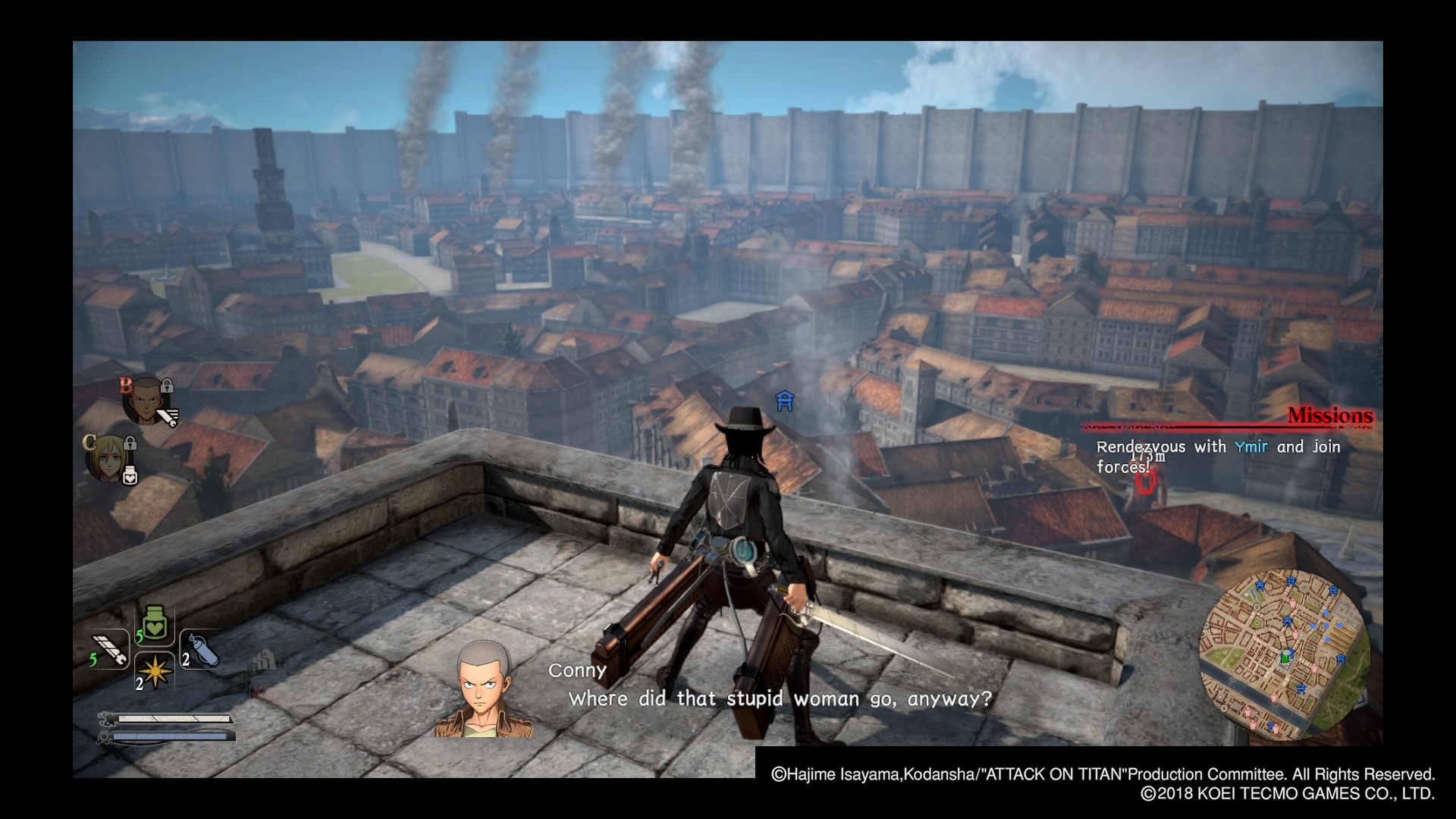 The graphical presentation is dreary, moody, and fits perfectly. Despite the fact that there muted colors tones involved, it manages to create interesting visuals with dynamic camera finishers, unnerving Titans, and vast maps. The city map is especially worth noting because much of it can be destroyed by the Titans making them visually even more threatening. There’s another fine detail that I found which adds a lot to the atmosphere: The Blood. Slashing up the Titans paints your character and the environment red reinforcing the feel of the do or die circumstances, if only for a second. 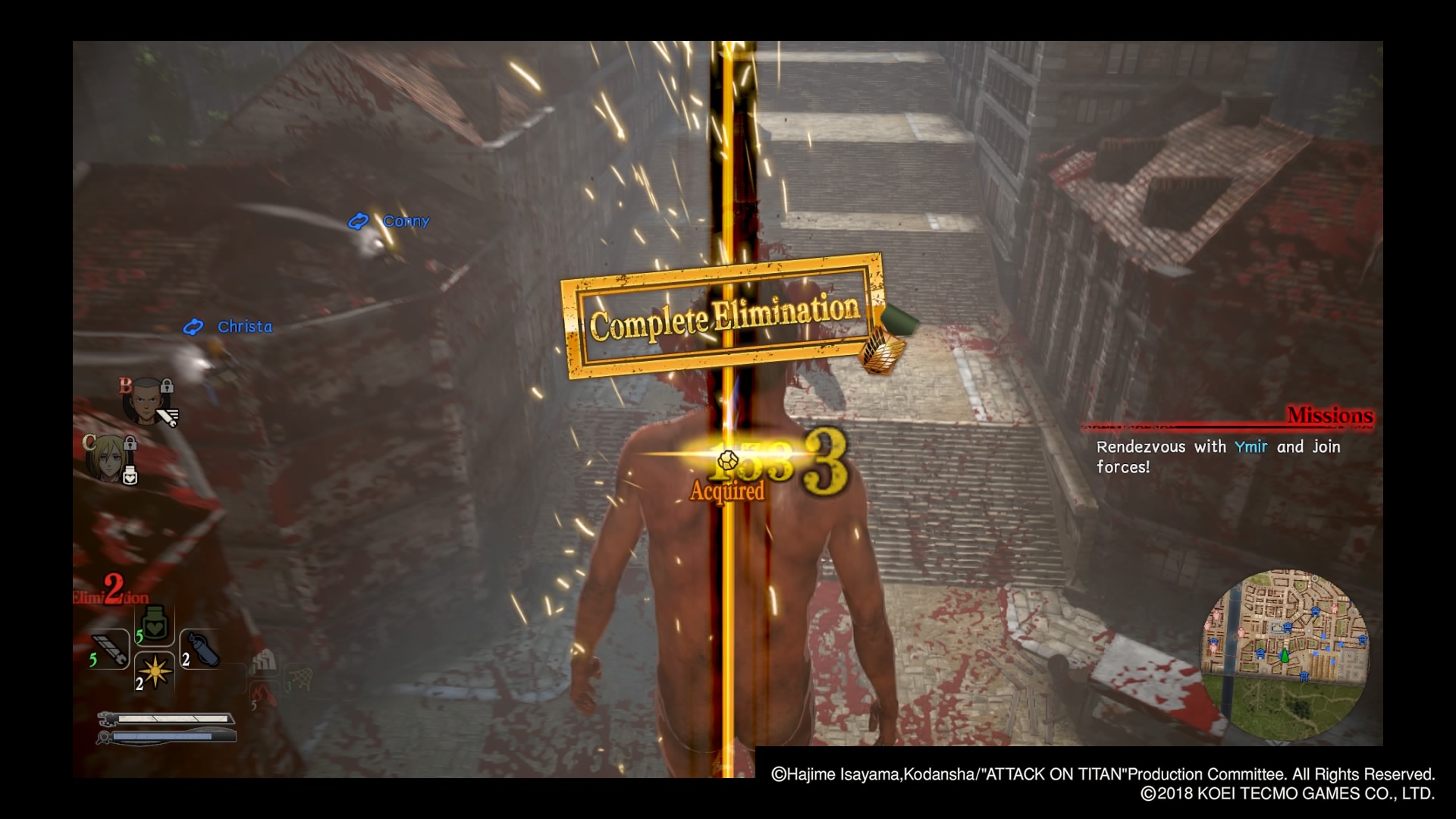 Like every other moment, that involves a fight against oversized opponents, there are orchestral tracks that accompany you throughout the epic fight for the future of humanity. Since it’s KT there’s no need to mention Voice Acting because that’s a given since like forever, though it’s only in Japanese.

A.O.T. 2: Final Battle is a great package that offers a ton of playtime and a nice entry into the Attack on Titan IP. So if you’ve always been interested in Attack on Titan, I can give this as a recommendation to get your feet wet. Though, that is only if you’re jumping in now and not before. Because as great as the additional content is from the Final Battle expansion, the price is a little bit just too much just for the upgrade. It is really giving me a conflicting headache on how to rate it. Ultimately, for newcomers, I rate it a very high Save. Unfortunately, for an upgrade DLC for vets who already own AOT 2, it would be a Save for Later purely because of the hefty price that early adopters would have to pay.