Welcome to your new internship! Are you perhaps helping out with the care of Professor Lupo’s pets or maybe conducting research about what makes them tick? Haha no. Aptly nicknamed Intern, you’re living bait for Lupo’s pets. After collecting some of the, dare I say, adorable aliens, on his space station (aka The Aurora), Professor Lupo is ready to sell his pets to anyone that has enough money. Not as house pets, no, as killing machines. Lupo’s pets have a taste for human flesh and they will go after any human that crosses their path.

Of course, everything goes wrong the day Professor Lupo is auctioning off his pets. In the middle of his demonstration, where you’re the bait of course, The Aurora is attacked by an organization called Blue Ragnarok. This causes all of Lupo’s pets to be released and if you want to make it to the escape pods, you’re going to have to run around the aliens. Luckily for you, it’s your job to be human bait, so it’s not like it’s anything different than what you normally do. It’s just a little bit more dangerous than normal. Along the way, you’ll be joined by The Aurora’s AI named Plato and occasionally get transmissions from Professor Lupo, Hugo (the Blue Ragnarok’s leader) and a mysterious Blue Ragnarok recruit named Fire who you’ll actually run into. 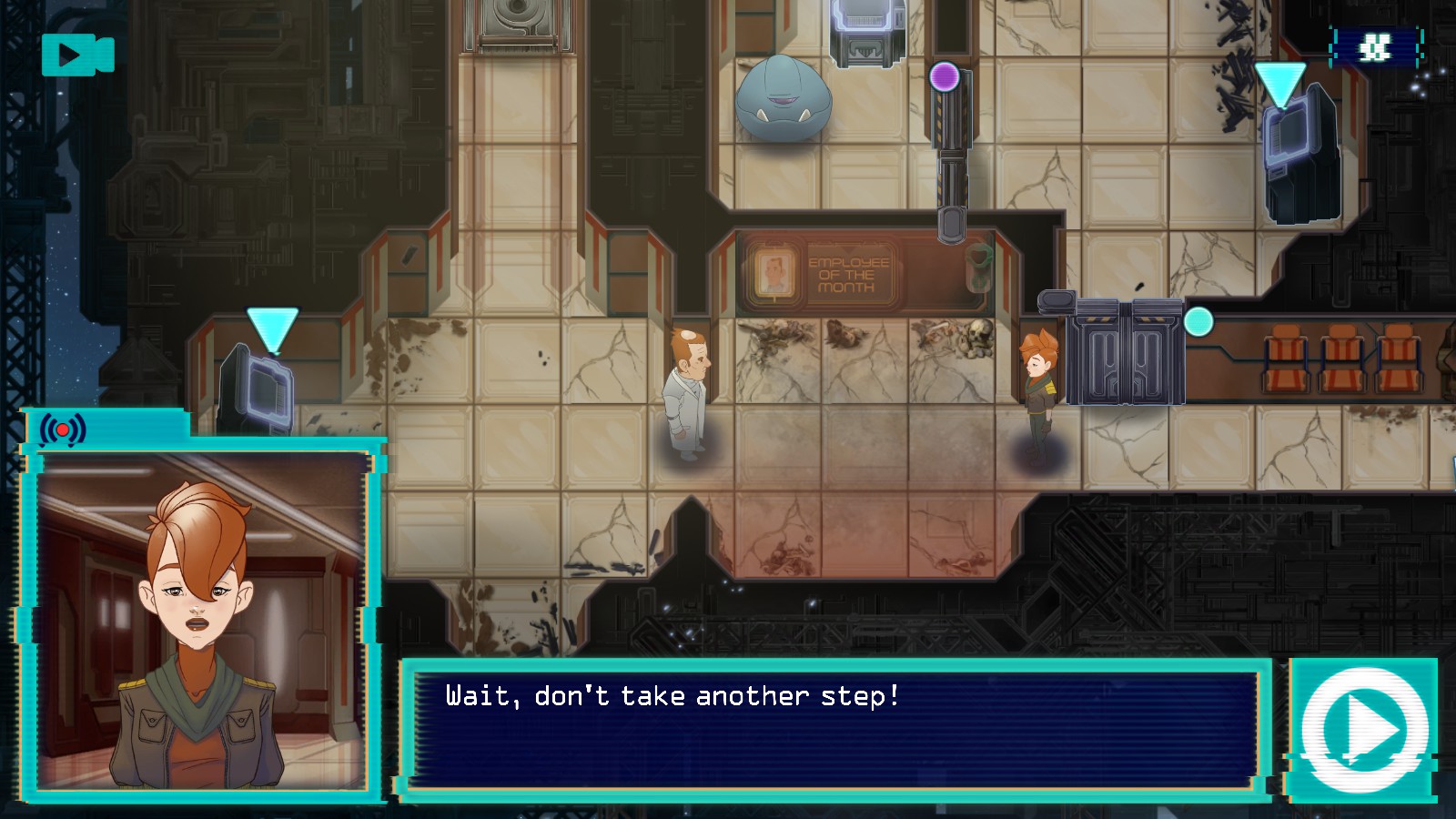 To complete a level in Profesor Lupo, you just have to make it to the illuminated mark (or the exit) without being eaten. Intern’s movement is controlled by your mouse, or keyboard depending on what you prefer, with doors needing a click to activate. Some doors will be able to activate anytime, but some will need you to go to the control panel to open and perhaps have a countdown when they open or close. As you continue, you’ll also come across other devices you can control like flamethrowers. Seems easy enough, but don’t forget that aliens roam throughout each level. Each alien has its own quirks that you can exploit. One of the first aliens you’ll encounter is the Vermis, which has a long body and can detect you through walls. However, the Vermis is kind of dumb and while it will head to your direction, it won’t notice that a wall is right in front of it’s face. You also have the Saggitas, which will roll towards you once detected, but will bounce off closed doors and can’t see when rolling (so you can walk off the space you were on to avoid being hit). 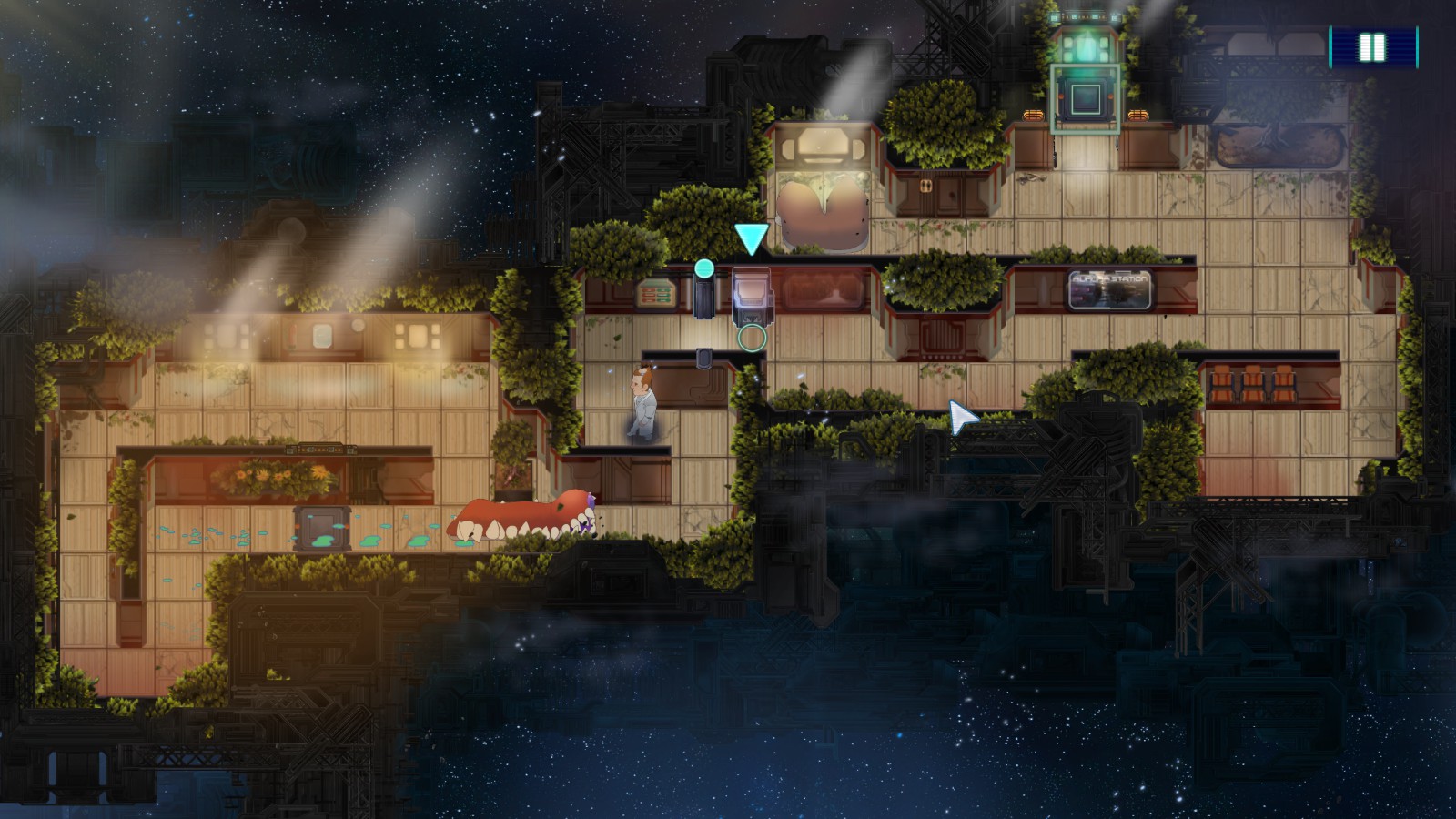 The kicker here is that while the aliens are easy to exploit, all of them are faster than Intern. A fact that the Intern doesn’t take to heart as he strolls around (does he want to live?). Nonetheless, it did create moments where I was holding my breath as an alien was right behind me and then released a sigh of relief as I arrived at the exit or shut a door in its face.

The great thing about Professor Lupo’s puzzle design is that each level has its way of subtly telling you what you need to do and just leaving you with all the legwork. Once you know the quirks each alien has, looking at the level’s floor and the aliens present sends out an idea on how the level can be solved. Of course, some levels will be harder to read, but it makes sense once you figure it out. Though, I would guess that most of the difficulty will come from how the levels rely on your timing. You might know how to solve the level, but your timing might be a little off causing you to be eaten. For me, one particular level in Chapter 4 had me stuck for two hours because I just couldn’t get the timing right. Something that did help out is altering between mouse and keyboard for movement (since the default path when clicking can sometimes make it longer to get there) and if a door (you can open anytime) is in your way, you can queue up Intern’s movement or tell him to activate a control panel once the door is out of his way. 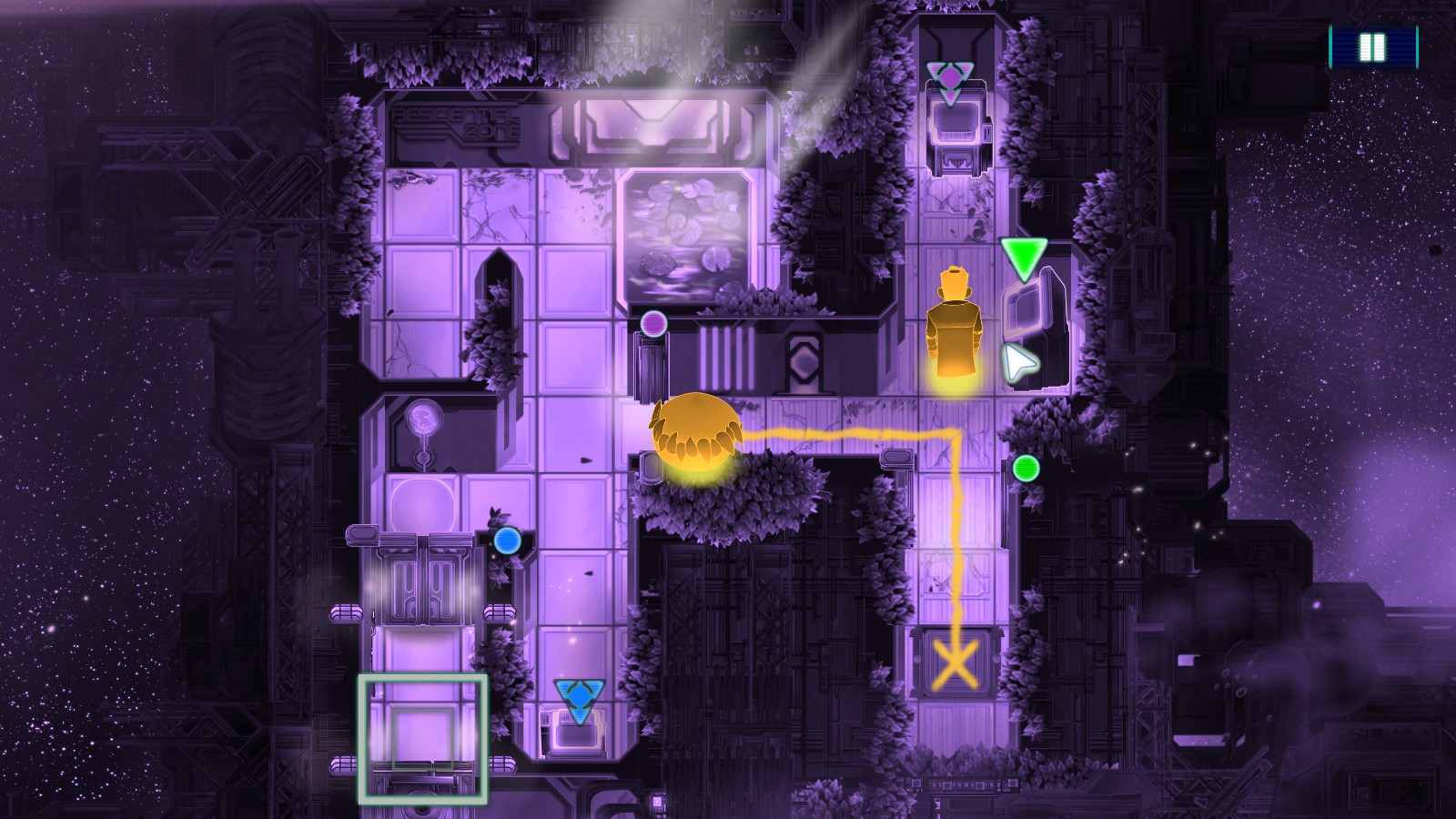 Some levels do have hints that activate after a couple of deaths, but it is not common as far as I can tell. Though apart from one level’s hint (where infrared is activated so you can see how a Sagittas moves), it may have already been deduced. There are also checkpoints on the levels, so you don’t have to redo the first half especially if you had trouble with it. It might actually help you as well as it will put the aliens where they should have been when you originally reached that part. 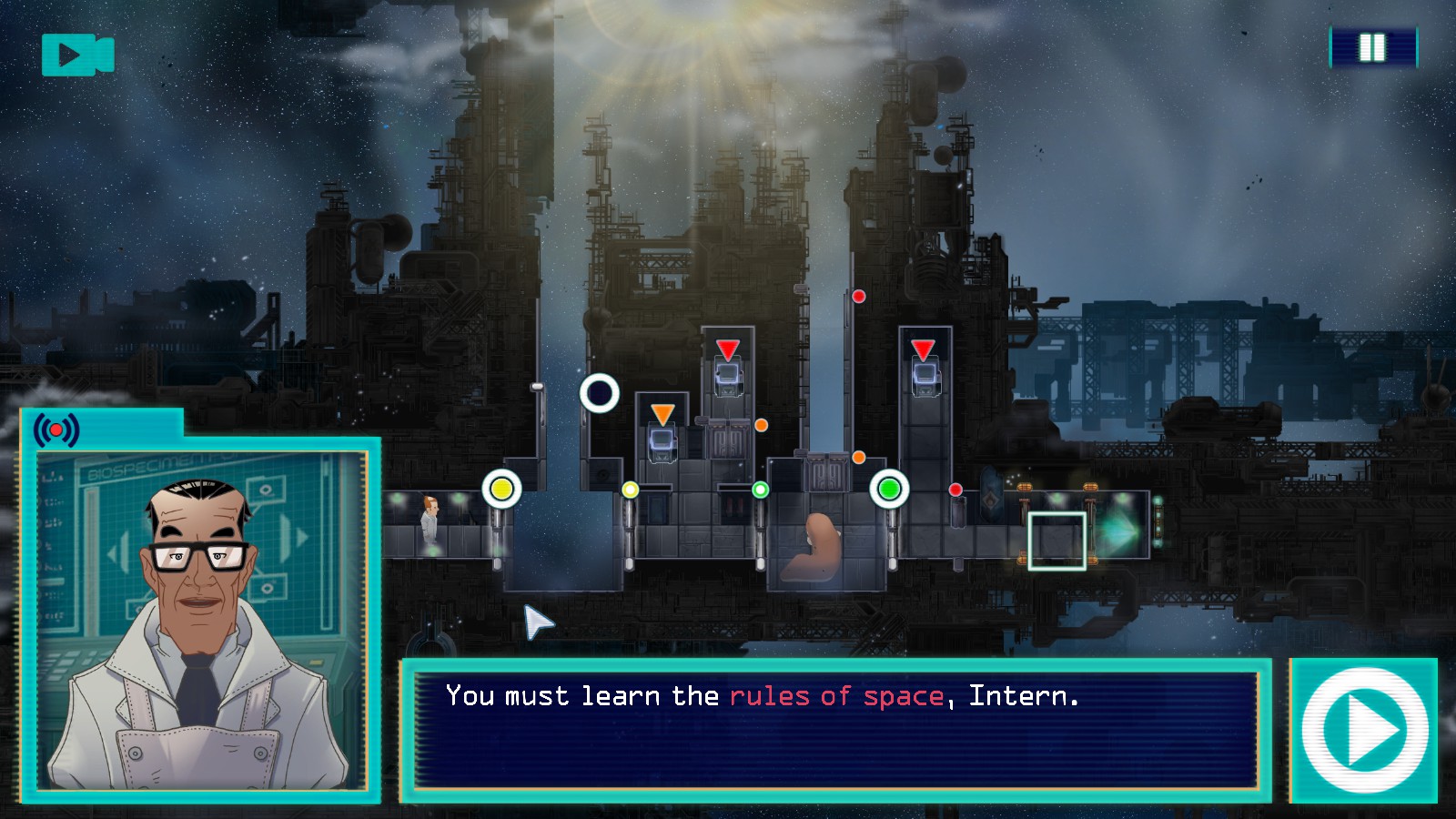 Each chapter will also introduce something new to keep things fresh over the course of 100 levels. It may be a new alien or a new mechanic that will stand in your way, but either way you’ll be able to understand how you can avoid death by the introduction level. For aliens, not all information will be given to you right away, but when it is, Professor Lupo does a good job at showing you the alien’s specific quirks. If you need a refresher, you can check the archives (accessible through the pause menu) as new information about an alien is logged. 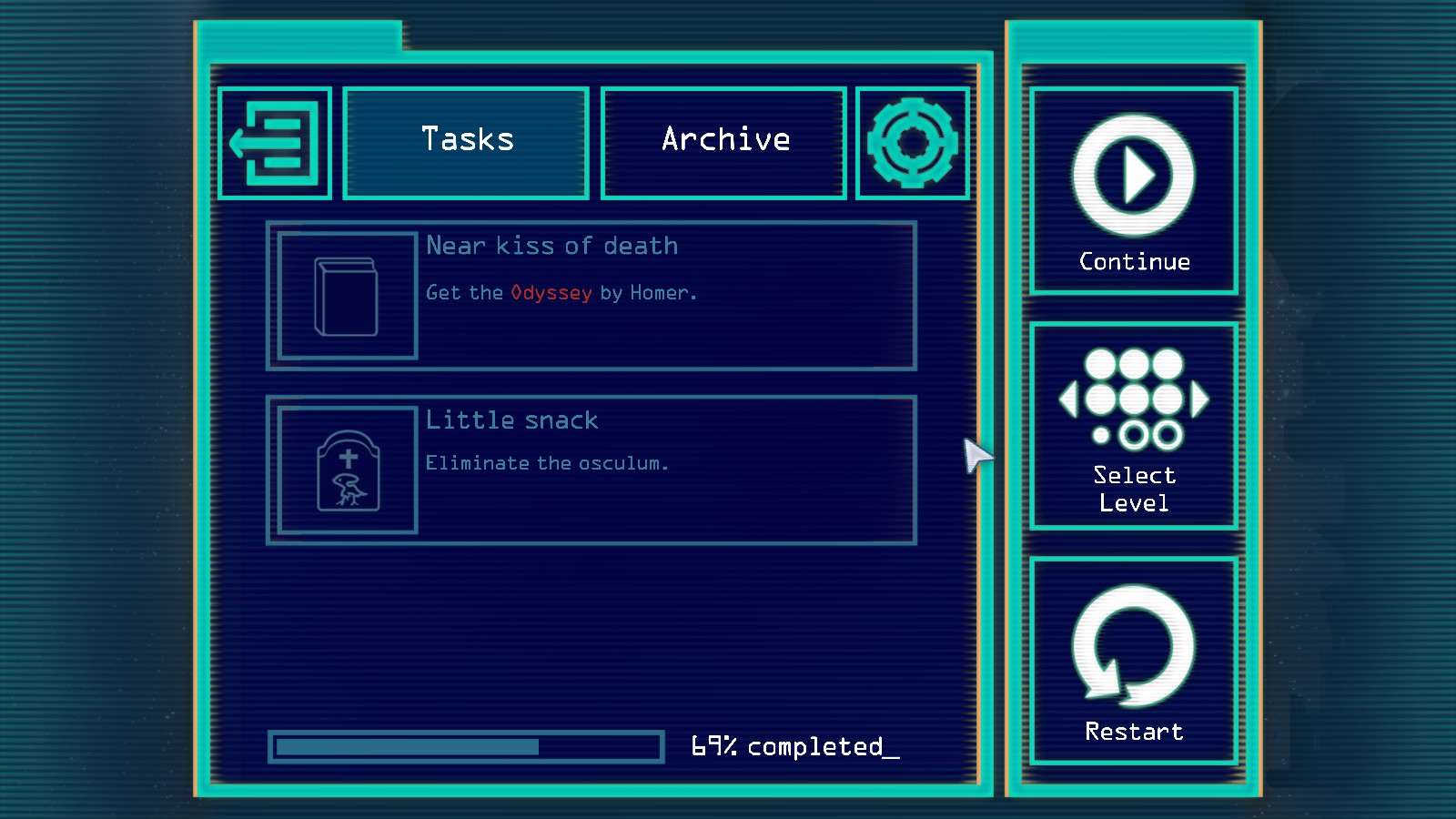 If you’re worried about the replayability factor, Professor Lupo has you covered. While you would normally only worry about surviving, each level has at least one task. Viewable on the pause screen, these tasks are meant to make you rethink how to solve a level so you can complete it. The most common you’ll see is to grab a hologram of a movie, book, music, or game. Most of these are out of the way, so you’ll have to figure out how to maneuver the alien away long enough for you to grab it, then figure out how to get to the exit without dying. There are a couple sprinkled in where you can save a warlord before they’re eaten by an alien. Then there’s some involving the aliens themselves. Some levels will have these weird orange zones placed around. These are called alien detection zones and if you activate all of them by luring an alien there, that task is complete. You’ll find yourself killing aliens in a lot of levels, but sometimes you don’t need to. Well, some tasks will ask you to find a way to kill a certain alien or prevent one from dying. Other levels will even have a hard version that uses the same floor plan but includes new elements to make the level harder than before. Lastly, there are some outlier tasks, like getting the best dialogue from Fire or making Plato mad. You won’t be able to see all the tasks when you first play the level, but you can still (accidentally) complete them before they’re revealed when you go back after completing. The only exception is hard mode, which waits until you first complete the level.

If you’re going down the 100% route, there is also an ending waiting for you, not to mention that each movie, book, music, and game collectible you collect will have a little in-character excerpt in the archive as well as Lupo’s notes that unlock when you complete hard mode levels. 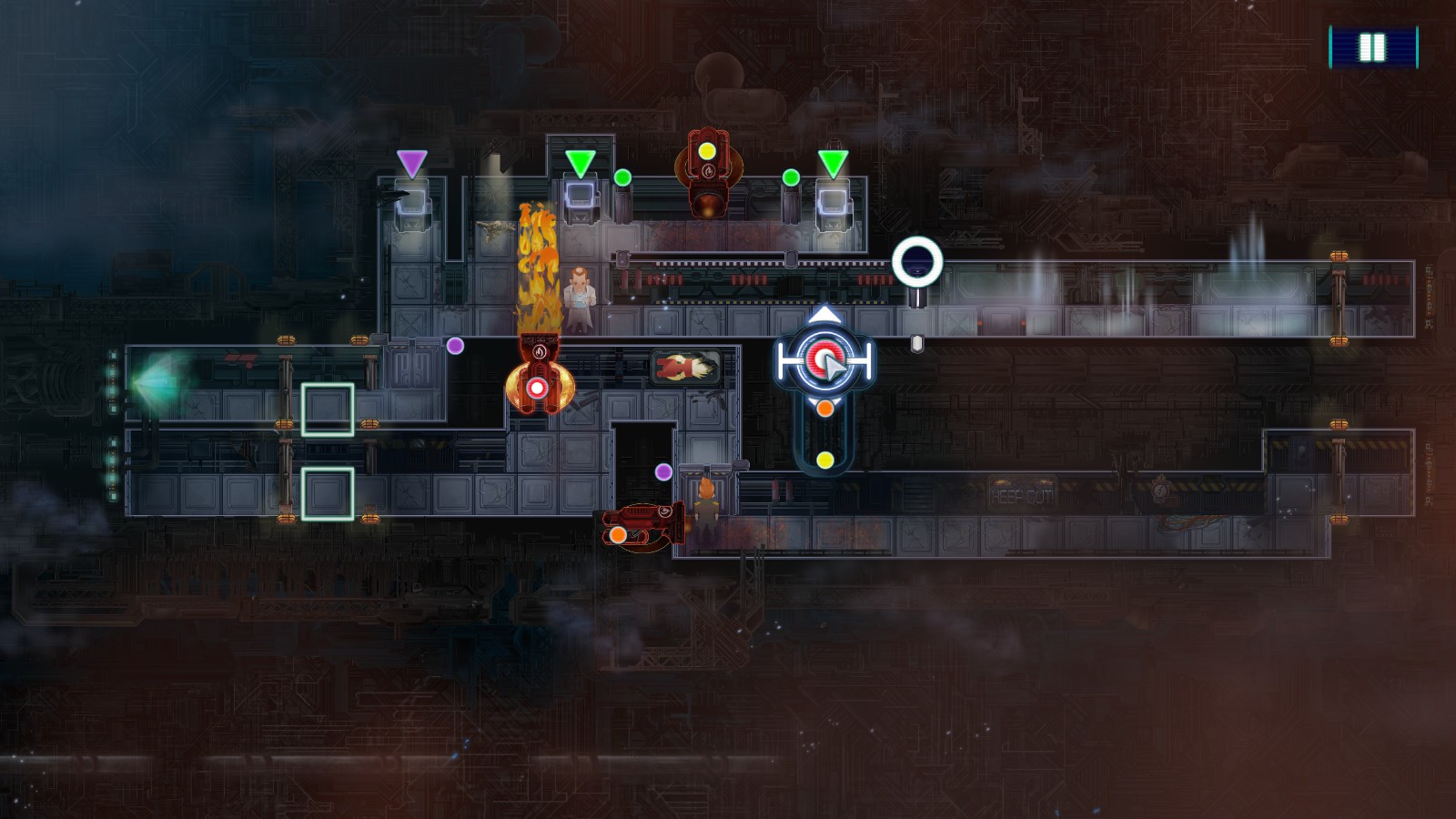