If you ever wanted to experience a text-adventure with modern polish without feeling entirely lost, then this is far from a bodge job even though it is a sci-fi tale of Bodgers.

Charm is something indescribably simple to feel, yet hard to express; it is a sensation as evocative of nostalgia as much as sheer confidence in the moment. Following the same Zenlike principles of coolness, it’s something you cannot imitate or make it deliberate, yet it speaks volumes of talent to pull off the charade. Thaumistry: In Charm’s Way, a modern text-adventure by the legendary Bob Bates of Infocom classics (Zork, Hitchhiker’s Guide, etc.), manages to kindle that same affection for these legends while also making a modern classic that is as unforgettable. What the game lacks in innovation or improvement on old ideas, Thaumistry makes up for its lovable quirks from its accessibility and its undeniable charisma.

Where “Text Adventure” is Not A Euphemism for Dramatic IM Logs

It should be important to point out Thaumistry is not my first text-adventure; however, it is the first I managed to complete without outside guidance. Attempting, as a child, Zork and Wasteland 1 left me utterly lost while trying to appreciate these games. Even as someone who enjoyed reading hundreds of books, text-adventures have always pushed the limits of the player’s imagination not only to envision the worlds created through words but also to solve problems from these unseen surroundings. That level of skill may be too intimidating for modern audiences.

Aside from obvious mental differences that makes these games more approachable as an adult, the core gameplay of text-adventures are tales spun from the scientific method. It’s the process of identifying observations from key commands that may lead previous hypotheses to new conclusions. Unless you have a knack for this type of thinking, or you operate on moon-logic everyday, the appeal of these games can make little sense. This sort of playfulness is rather half the fun (and all the frustration) behind these titles, and it’s something that is unmistakable to Thaumistry. Instead of creating more frustrations like the past, however, the game settles to always nudge you in the general direction. 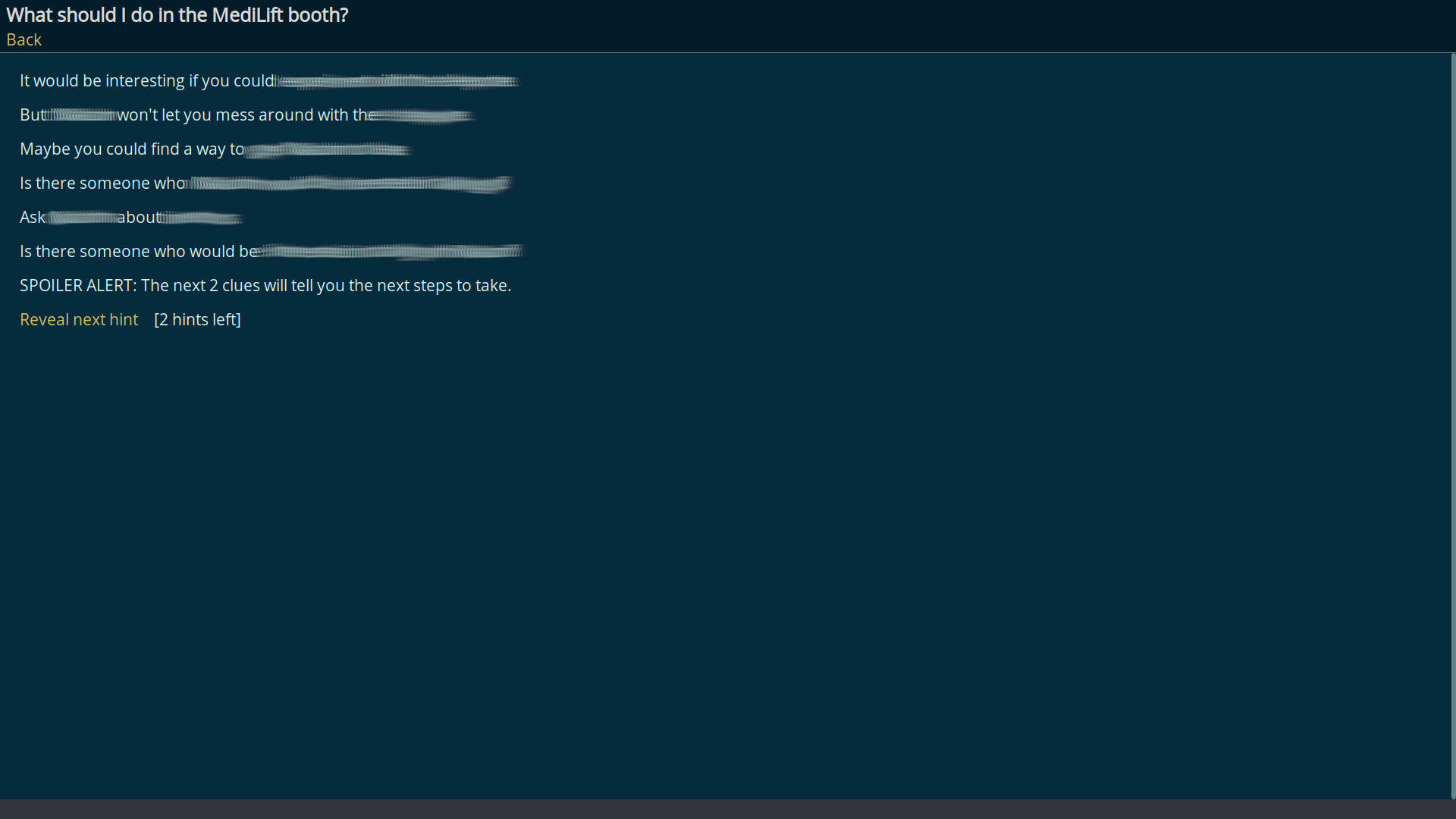 Whereas newer text-adventures expand their capabilities to tell narratives with audiovisual elements, which include Stories Untold’s horror elements or Event[0]’s ChatBot, Thaumistry is content to rely on tried-and-true methods with optional accessible features. These practices include an Infocom pamphlet to bask in its humor and its lore outside of the game, which can help you get a better understanding of the world as much as the tutorial.

Instead of requiring notepads for details, hand-drawn maps, etc. Thaumistry offers various means to help players not only refresh their memory but also seek guidance. These include features like the >think/>memory command to bring up a synopsis up to that moment with some general purpose, auto-commands for directions (written for a compass or for general directions), the simplified map, and the hint system which always trickles small clues before warning you about spoilers. The important detail is these additions are never forced on players who prefer to take their time, and if you simply play the game as you are meant to as Eric Knight, an inventor who learns he is a Bodger—essentially Wizards who feel right at home in Hitchhiker’s Guide to the Galaxy—these modern additions only make this text-adventure the best introduction to modern audiences. 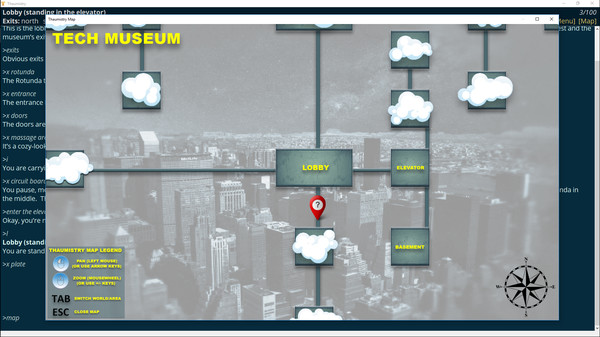 It Ain’t No Bodge Job, But It Ain’t Perfect Either

What doesn’t translate as gracefully with the times about Thaumistry is perhaps a sorer spot for fans. Despite the same shortcomings that come with the genre, including one-off commands that become easily forgotten or puzzles which do not include enough details for its moon-logic, the game’s greatest blunder is its underdeveloped theme behind its story, namely its scattershot focus on identity. The narrative itself and the humor are fine, yet the impact behind it all lacks the intended effect it wanted other than being its own punchline about what makes you who you are your own actions.

This isn’t simply a personal assessment as Bates himself admits it wasn’t well-executed. As he describes to PC Gamer, “I did want the game to be ‘about’ something, and that something is Identity. I wanted to explore how people come to decide who they are and how they define themselves… There isn’t some grand message here, although there is an abiding sense that your identity is strongly linked to what you decide to do.” In retrospect, there is some semblance of this idea, but it’s not something you will realize in the moment. This is one of things that probably will not bother others as much if you simply want to enjoy its narrative, yet it could only have made it a stronger story if done correctly. 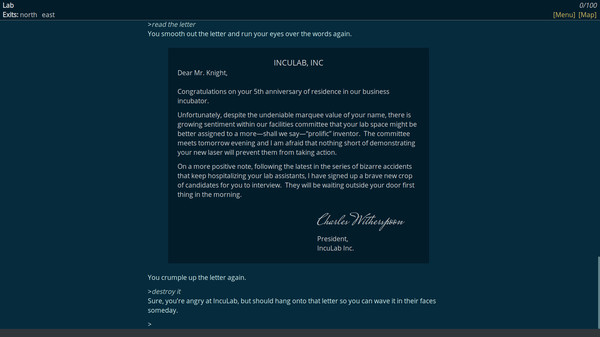 Perhaps part of the problem, other than the likely scenario of ideas not working out, is tied to the fundamental issues of the text-adventure format. While the pamphlet expands on the lore of Bodgers and the background of Eric Knight, it remains a piece of the story that should have had more prominence in-game. In the past, these supplementary texts were solutions made towards memory constraints whereas here it is done for nostalgia. (In fairness, it does add little details that are mentioned in-game.) The other issue with telling a story about identity as a text-adventure is that the character must be written either as a genus or a simpleton while the player has too much control on his or her believability. While far simpler in their gameplay, the “Choice of…” games and even walking-sims handle this aspect far better because players have set parameters on how malleable are their identity.

None of these problems are reasons not to tell stories as text-adventures or even limitations on its core gameplay to tell stories. They are restraints on the traditional format that could benefit from modern ideas like branching dialogue/choice paths or puzzles based around learning about characters in more detail, which would require a lot more work than the amount that had to be made to make this game. However, Thaumistry is ultimately a passion project from a creator who wanted to bring back something deemed unmarketable to fans who wanted something new to cherish, so this is one case where the “Keep it simple, stupid” approach was probably the smarter decision to make. 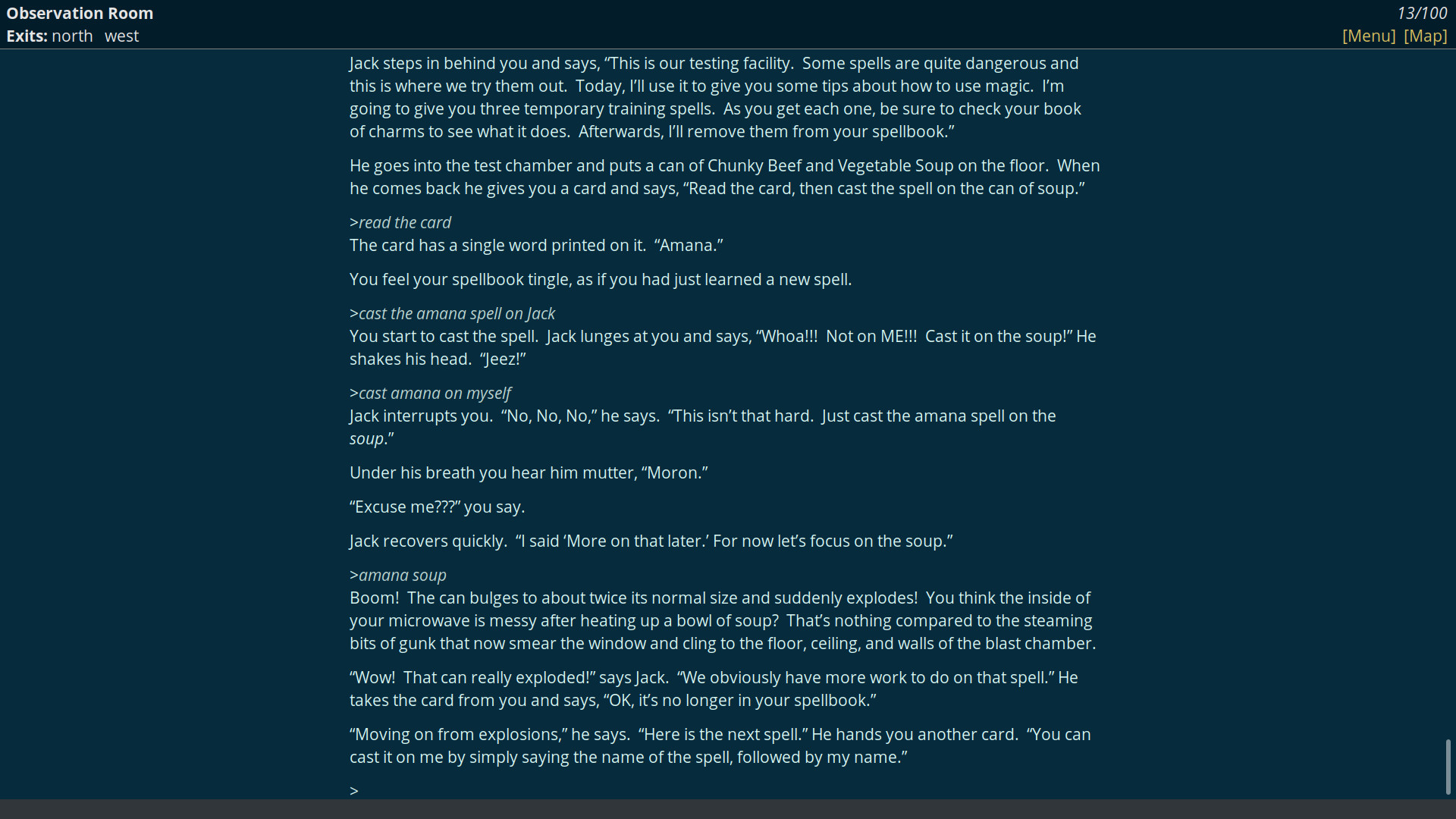 Verdict: Bewitched, Bodgered and Bewildered Am I

Unless the core gameplay turns you away or reading is too much of a hassle—first of all, why are you still here if you don’t enjoy to suffer?—Thaumistry is as great of a place to start while also continuing the possibility for future tales. The only other negative I would consider is its base-price, which I normally would not factor as that is a matter you can sort out between you and your conscience like communion. While there is some breadth to the journey, it’s difficult to justify its cost of anything more than a paperback novel when there are hundreds of text-based games far cheaper. It’s also difficult not to enjoy this game unless there is no curiosity in you. For as many wrong steps you can make along its journey, there are no regrets other than a few more smiles you can contrive from casting spells on people or summoning another llama at a moment’s notice for a spit take.