The first DLC for Battlefleet Gothic: Armada 2 brings about the Chaos Faction and their Dark Gods. The Emperor won’t protect you now.

A while ago we ran the review for Battlefleet Gothic: Armada 2 and decided to have a little fun with it by writing it as a strictly devout Emperor follower. We deliberately tried to give that impression by saying things like it would be heresy to do this or you will be branded a heretic if you do that. It looks like change is on the horizon now as something seems different. It appears like there are more and more individuals straying from the Emperor’s light these days. Perhaps we should say going to the dark side. The traitorous Chaos faction is now playable.

Each of the now four campaigns do play a little differently. While the core gameplay is basically the same and can be a bit repetitive in extended sessions, each faction has enough variation to it to give it a different feeling. The Imperium possesses battle ready vessels designed for charging into battle before unloading their broadsides onto the enemy. The Necrons rely on their ability to warp around to do burst attacks rather than sit in prolonged combat. They also can move quickly move between sectors thanks to their gates. The Tyranids rely on inflicting terror into their enemies as they infest or otherwise consume them. They also do not bother to try to protect worlds all that carefully because once they are done with a world there is nothing left to protect on the remains of the now dead world. Now the Chaos Factions joins the fray. While they are not that divergent from the other factions in terms of ship types and functionality, they still do have their own unique resources and faction specific elements. First off, there are the four Dark Gods. Each Dark God, once enough tribute has been made, will be able to impact the tides of battle in their own unique ways. One method is eroding the hulls of an enemy fleet to reduce their effectiveness in battle or banishing a fleet to another sector entirely. Some of the Chaos ships borrow abilities from other factions as well such as having a fly swarm that chews away at enemy armor while at the same time restoring armor to the host ship. There are three sub-factions you can pull from to build your fleet and each of those can have multiple sub-sub-factions. The first two, Renegades and Chaos Legions are not really worth mentioning as they are similar to those sub-factions found in the main game already and we talked about them briefly before. The Marked Faction is the interesting one because these four are tied to the Dark Gods themselves. Each Marked sub-faction option lets you choose a ship based on the gifts bestowed upon you by the Dark Gods. 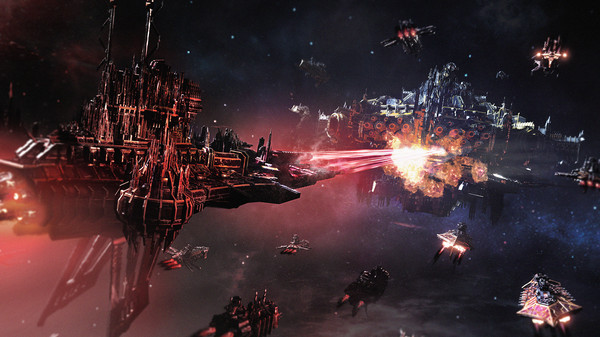 Something we didn’t go into great detail on in the main game review was the User Interface. The game can get quite confusing with all of the options it lays out to you. If you want to succeed in this game, you will want to micromanage each of your ships in combat. Each ship has abilities which if ignored may cost you the battle as they can really turn the tides. A good example of this was one of my Marked ships that had the fly swarm ability was being attacked by multiple smaller ships. While it could easily handle one of them on its own, maybe even two, it couldn’t handle being swarmed by them. Luckily it was able to swarm them right back with its pestilent flies which quickly engulfed each of the enemy ships and chewed their hulls apart quickly while restoring my larger cruiser back to its former glory. Had I not used that ability, there is no way that cruiser would have survived its encounter. Besides micromanaging your weapons, you can also adjust things such as firing distances and priorities. That way the AI will do its best to do what you want even if you ignore some of your ships for a while. There is plenty to talk about with the UI, but this review is more about the DLC itself. While not directly related to the DLC, there is now a customizable difficulty setting. If you found the game too hard even on easy, or too easy even on hard, you can now tailor your experience to be exactly how you want it to be.

The campaign in this DLC feels the same as the other campaigns. There is your standard must complete mission to progress the story, some side quests you can do, as well as you just brutally pushing your way through sectors and forcing them to bend to your will. I have to admit, that I did not enjoy the first few missions that this DLC had to offer, but eventually they became more enjoyable. The first mission has you defending cargo ships from the enemy as well as from what basically amount to giant explosive space jellyfish. The cargo ships were all AI controlled and about as sharp as a bowl of gelatin. They would happily fly into the explosive jellyfish, get in the way of your shots against the enemy, or otherwise have some kind of death wish. Basically, the mission does tell you how to solve it, and if you listen properly you can probably win it, but it is still kind of hard for a first mission for someone who had to wipe the dust off their battlecruiser. A few missions later you have to hunt for ships without sensors and also capture one of them. This is all fine and dandy, but I still didn’t have much of a fleet at this point and the enemy had a whole heap of ships. Now the mission does tell you to get there as fast as you can to avoid reinforcements, but it still takes several turns to get to the staging area. I lost a lot of good ships trying to finish that mission, but I did succeed eventually. After that point the game starts being more reasonable. The non-mission-based battles are still a little repetitive even with the optional quests that sometimes appear. Either blow up all enemies or capture nodes and hold them long enough are the usual tasks. Sometimes you need to assassinate someone or perform some other specific action to gain bonuses, but usually that option isn’t available. All in all, the new story elements make it worth your while to press on even if your conquest does get a bit tedious after a while. The voice acting for this DLC is still top notch. The sound effects while repetitive do not get tiresome. The music accompanying the game is very enjoyable and really helps to keep you in the spirit of things.

So, should you pick up Battlefleet Gothic: Armada 2: Chaos Campaign DLC? If you played the original Battlefleet Gothic: Armada 2 and enjoyed it I see no reason not to pick up the DLC. It adds another vantage point to the game from a fairly popular faction. While it doesn’t really feel as unique as the main game campaign factions were from each other, it still is worth playing in its own right. The Dark Gods make for an interesting twist to the gameplay and there are enough ship options to suit anyone’s needs or taste. Other than a bit of a shaky start where I almost regretted picking it up, I started to enjoy what the DLC had to offer once I got more into it. Overall it is one that I would save for later.