REVIEW: The World Next Door

Only a matter of time till dimensional scissors are made.

The World Next Door follows a teenager named Jun who lives in a universe where Earth has a next door neighbor. This other world is Emrys, where mystical beings that can control magic reside. While the first discovery of each other was not a pleasant one, now they’re both focused on coexisting peacefully. Luckily for both worlds, they’re also connected by the internet so humans and Emryns don’t need to cross over to talk. This is actually fortunate since the portal actually only opens up every two decades for only one day. Since the portal doesn’t open that often, both worlds organize a festival to celebrate and randomly selects a handful of citizens to cross over and visit. 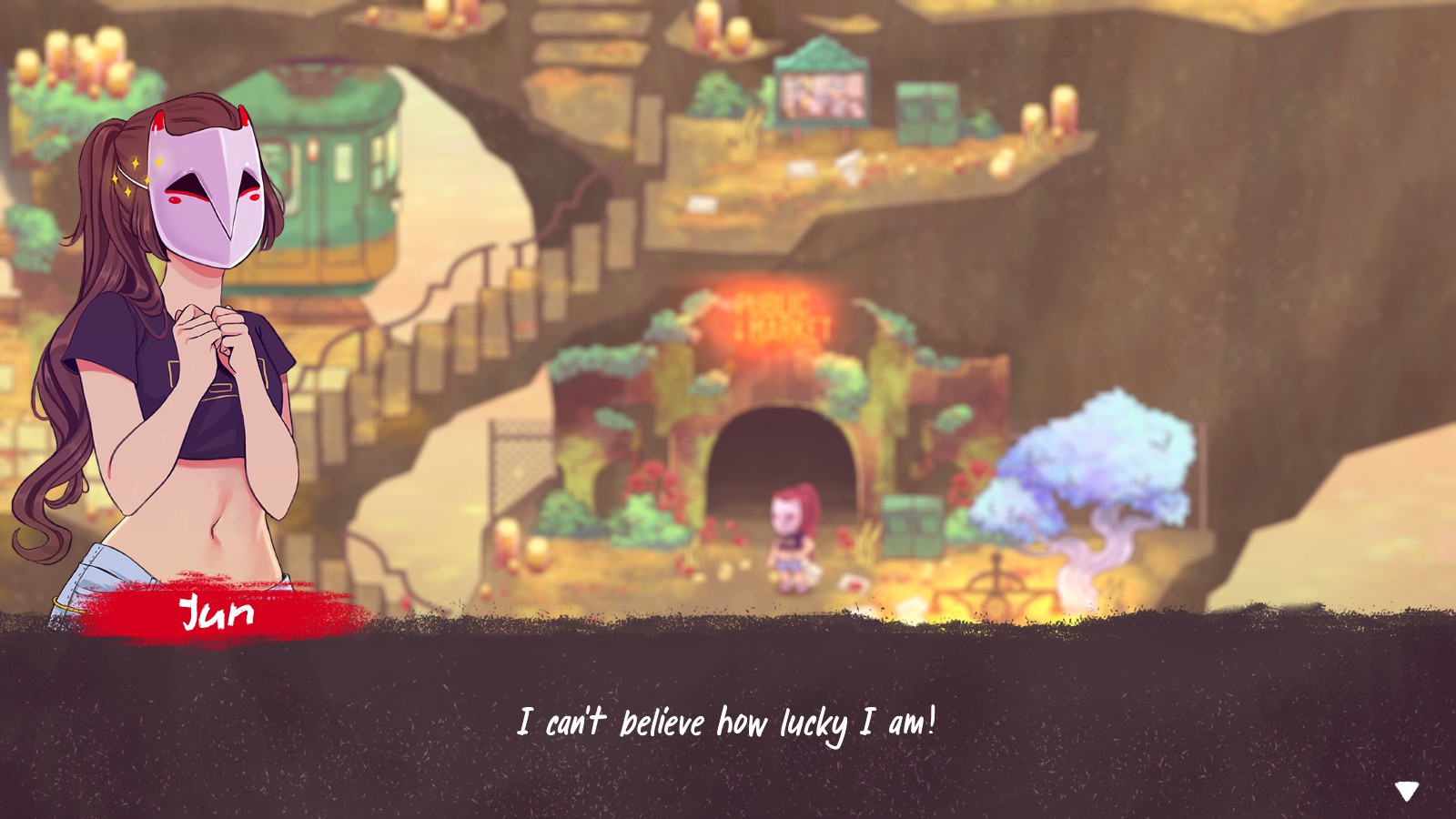 Jun, who has been craving to visit Emrys her whole life, actually got her name drawn. Once she crossed over to Emrys, she finally gets to meet Liza, a demon spirit who Jun has been talking to for a while now, and a water drake named Rainy. Determined to make Jun’s visit unforgettable, Liza takes a risk and brings Jun to a totally not off-limits shrine. There Jun becomes fast friends with Cerisse, a divine spirit, and Horace, an undead spirit, and gets introduced to magic. Unfortunately, Jun’s luck ends here. A Grievance appears as Jun is trying out magic, blocks an exit, and attacks. Forcing Jun to go the long way, attack more Grievances on the way, and miss the portal. 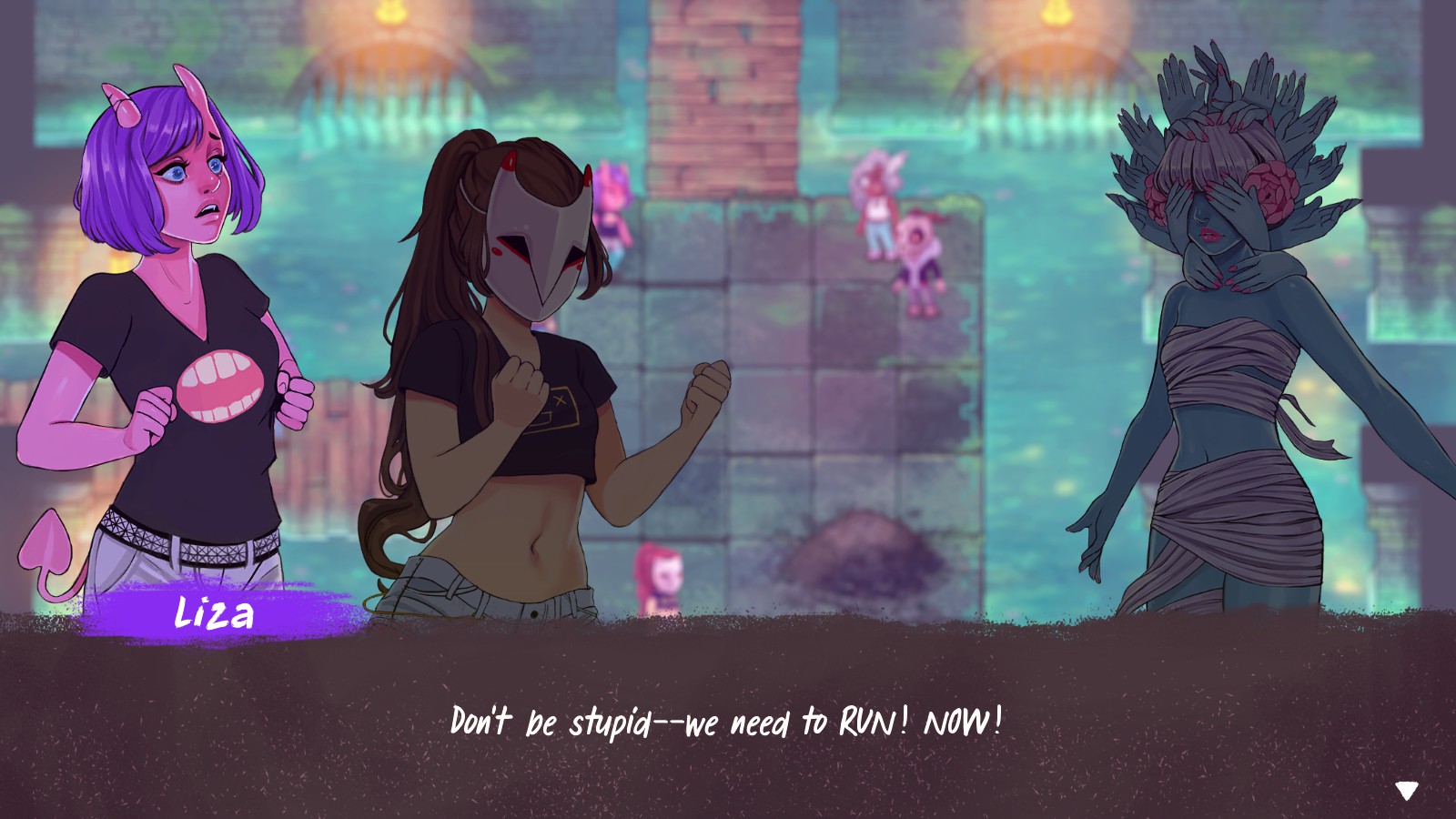 Since Jun wanted to visit Emrys, you’ll think getting stuck won’t be as bad. Sure, anybody that knew Jun would be worried and she doesn’t have all her stuff, but still. Well, here’s the thing, humans can’t survive on Emrys. After a couple of days, they die. With only speculation that the shrines are connected to the portal, Jun and her Emrys friends set out to get that portal to open again. 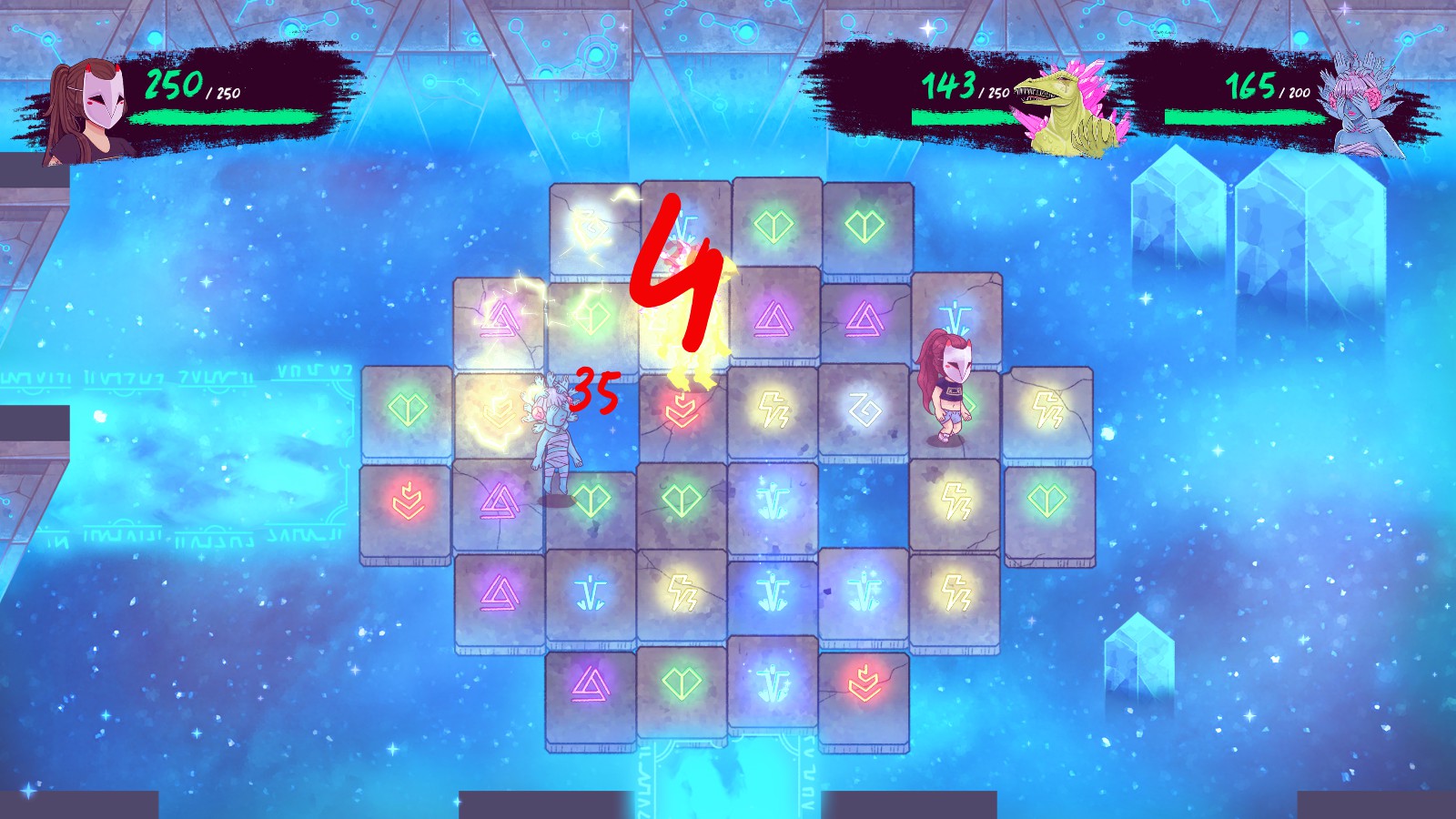 The only way Jun can get home is by going back into the shrines, so you will have to fight more Grievances. The combat here is basically Match 3 with floor runes. You can cast six different spells, all of which have their own rune design and color that will target the nearest enemy. You have Strike (blue) that will directly slash an enemy; Shock (yellow) that will electrify the area the runes were and cause enemies to stop in their tracks; Ember (red) will cast a fireball; Void (purple) sends a void projectile that will slow down enemies but will fizzle out; Cure (green) will heal Jun, and finally Essence (white) which summons one of your friend’s special abilities. Essence, in particular, will require you to assign one of your friends that went in the shrine with you and arrange five Essence runes in a specific pattern.

The World Next Door does incentivize planning ahead and waiting to cast spells. While casting a spell right as you match three still does its job, matching more will increase the spell’s power. Not to mention that you have less of a chance of getting hit since Jun will pause when spellcasting. In addition, if you also have a match by a spell you just cast, that adjacent spell will be empowered for a short time. However, there are enemies that will block out runes and will even cast your own rune matches. 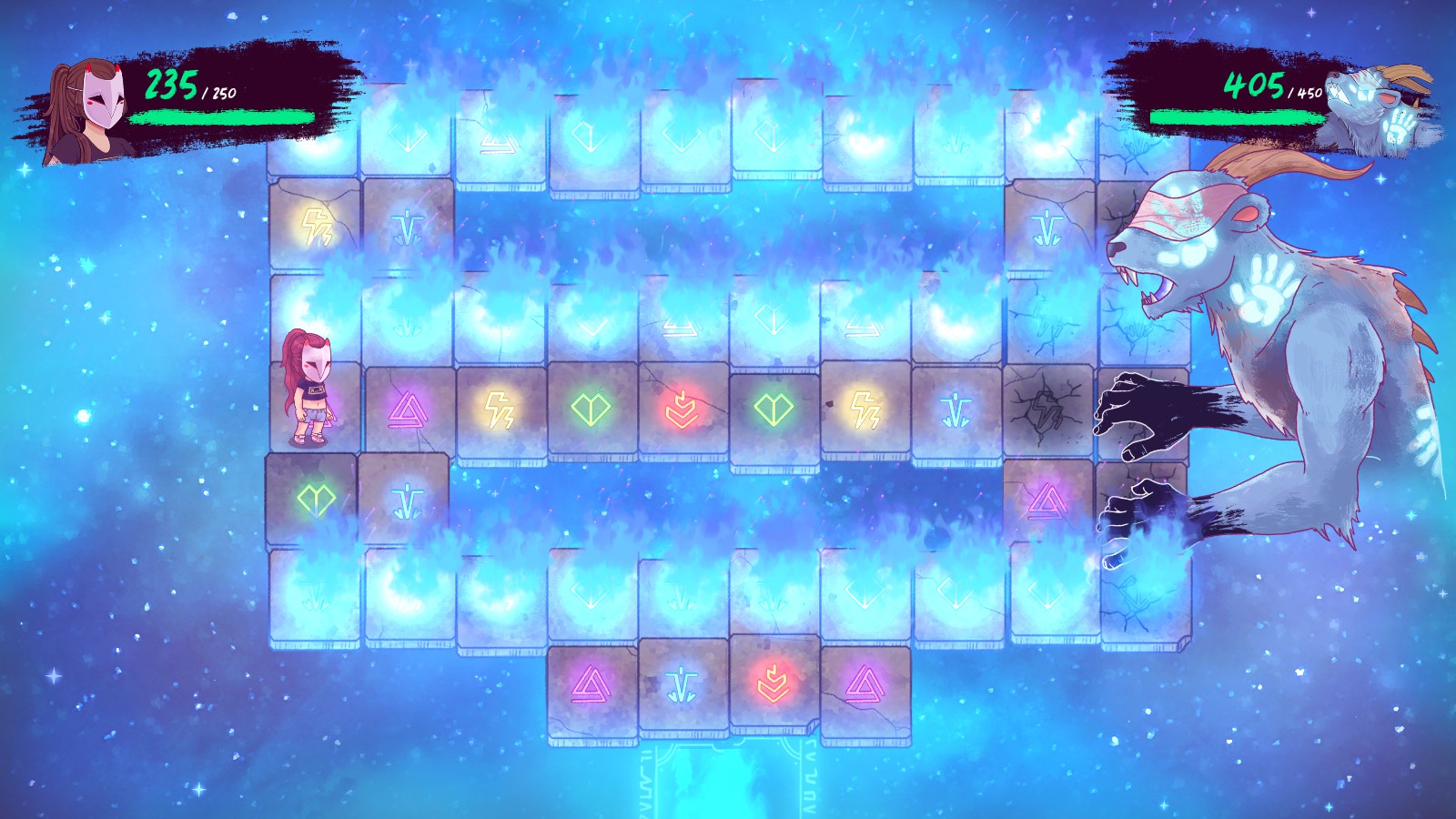 There is an assist mode available to turn on if you’re having trouble, just in it for the story, or replaying it to get missed achievements. This stops Jun from taking any damage during combat so all you have to worry about is killing that Grievance before continuing.

Most shrines, and a side quest, also hold an optional puzzle room. These puzzle rooms focus on using all the runes shown and perhaps demolishing something in the progress. If you successfully solve the puzzle room, you’ll be granted an item that mostly goes towards the Collector achievement. 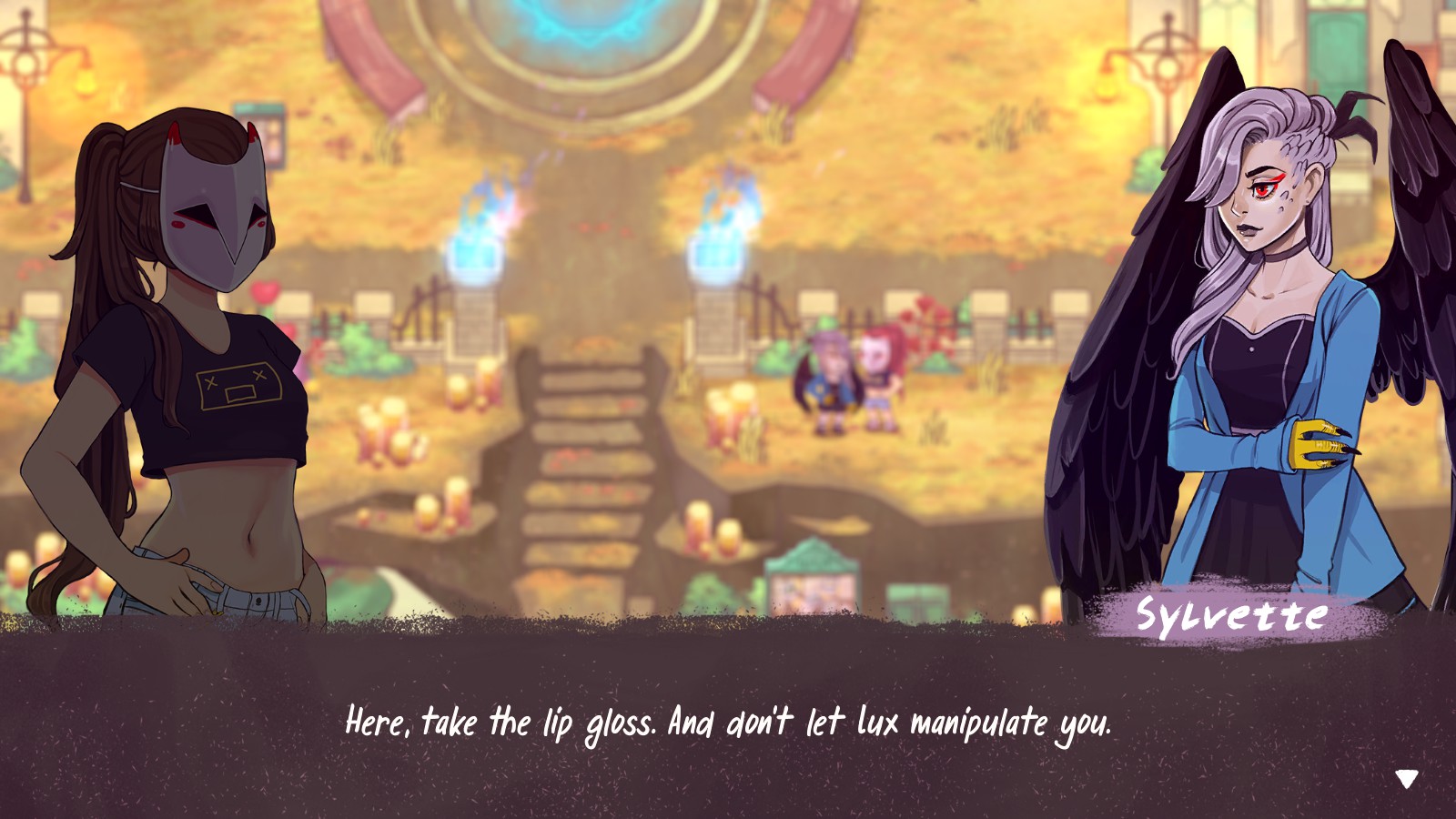 Outside of battling your way through shrines, you can explore Arkeo, talk to your friends and other students, and pick up side quests. Each day, before and after visiting a shrine, you’ll be able to talk to anyone that’s out (which changes each day). Some of the students, including Jun’s friends, will give you side quests. These can get you more info on Emrys and the various students at The Academy. Some are pretty basic (like finding an item), but I did enjoy most of them. Completing the side quests will award you an item that goes towards an achievement (but I do wish you could look closer). While on this, you’ll get various dialogue choices that vary in emotion and mostly revolve around how Jun is as a character. They don’t directly impact the story, but how you interact with the various characters will affect how part of the ending scenes go.

I did like the cast of characters The World Next Door offers, but there’s a weird inclusion of a news reporter named Aki (who’s voice I constantly felt sounded familiar) that you can listen to in a Pawn shop window. Considering that every other character speaks Emryn, which is like Simlish, Aki is out of place since she fully speaks her lines in English (while also implying that Aki lives in Emrys). Perhaps it wouldn’t have been so out of place if Aki was on Earth and Jun had the option to listen to her every day via Jun’s phone.

The World Next Door is perfectly in the middle for me. There’s nothing that’s outright bad and it is mostly balanced by what’s good. While the conclusion is too open (which can leave players disappointed), some fights feel too cramped when you have a couple of enemies fighting you at the same time, and it only lasts for a few hours (leaving you wanting more). In the end, I did enjoy the story, combat, music, and I adored the art and character design.

While I do hope that we get a sequel, I’d wait for a discount. With The World Next Door being the first game VIZ Media has published, I’m also looking forward to what other anime-inspired games they’ll publish in the future.