A logic game where flipping the bird when you get upset is a legitimate strategy, which is how you’re going to feel sometimes.

With the release of Snakebird: Primer, which is more of a beginner-friendly version with a smoother learning curve, my reservations towards the original Snakebird now comes with a wholehearted recommendation. Even with these “beginner puzzles,” you’re bound to get stuck due to learning (and failing) to grasp subtle mechanics like shifting your weight when falling to land safely on your head. This type of logic puzzle gnaws at your thoughts after you give up, only to come back later with the obvious answer staring right back at you–kind of like the worms themselves now that I think about it. 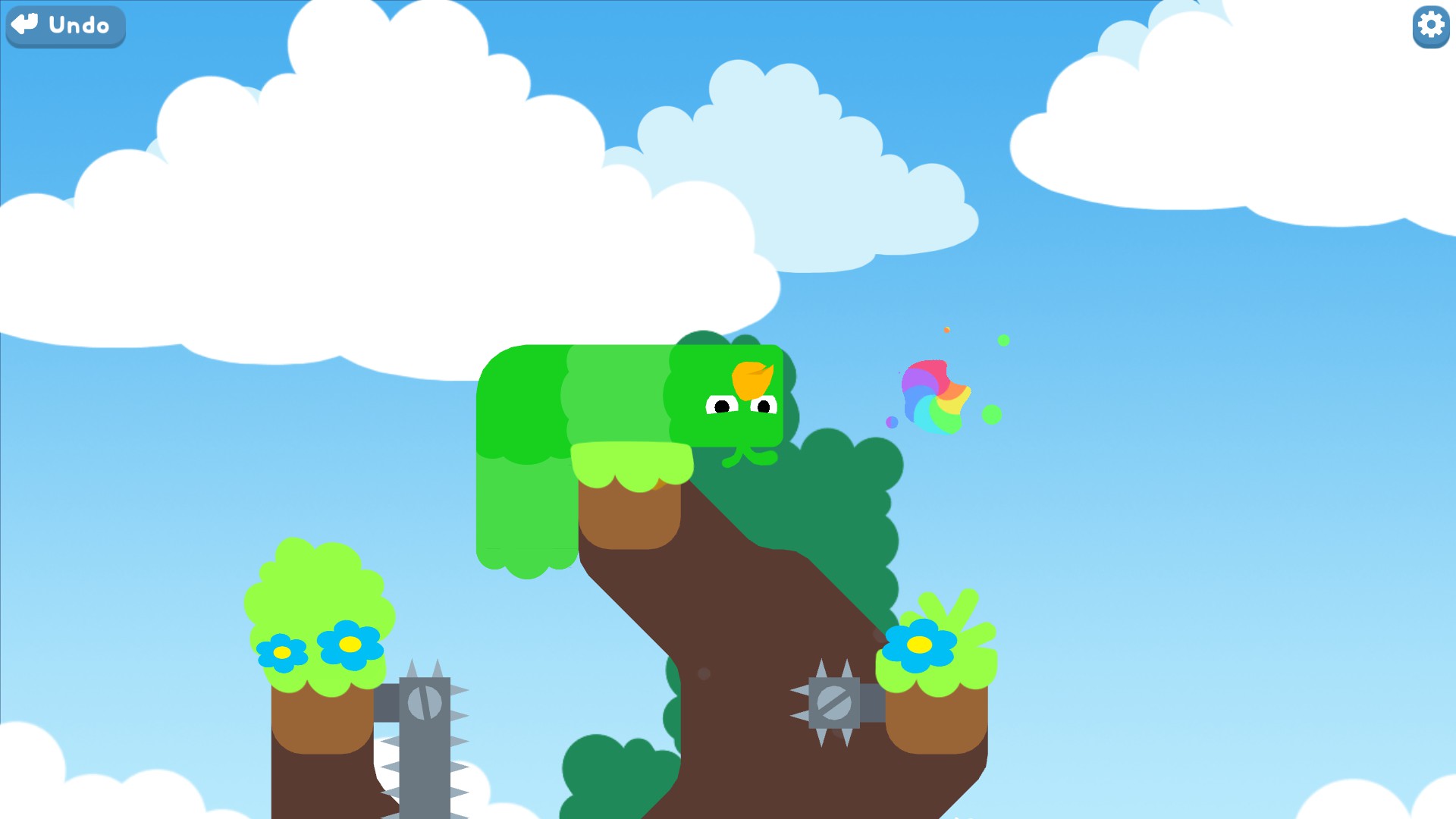 Visual metaphors and personal phobias aside, feeling inept at something deceptively simple is rather the point of Snakebird; the kid-friendly exterior masquerades how much you have to wrap your head around these elaborate solutions. The sign of a good puzzle game is when you can realize what you did wrong after finding the solution, and then being able to admit that it wasn’t the puzzle at fault but yourself that was the problem. However, like Mr. Miyagi once said about bad students having bad teachers, Snakebird does share some of the blame by opting for a non-linear approach of teaching the player as well as ordering the puzzles without priming the player first.

A lot of people describe this game as any other puzzle game when it would be better described as a logic puzzle, one where you get the solution from making deductions where to go next by checking all your other options first. As someone who enjoys various puzzle games ranging from The Witness, Grim Fandango, to TRI: Of Friendship and Madness, I cannot help but think this distinction is important. There are far more lateral-thinking puzzles based on understanding the nuances of Snakebirds and applying those strategies to situations where you have to be more creative (and aware) of these mechanics.

To describe this situation in a less convoluted way: “Puzzle Games” are like playing with Rubik’s cubes; they’re governed by rules, patterns and limitations that don’t require understanding the entire problem at once. Instead, you shape the problem, gradually, towards the solution by careful observation. “Logic Puzzles” take that Rubik cube in one formation and you’re given X amount of moves to solve the problem. The emphasis is taken away from careful observations, and the puzzle is now focused on testing your knowledge of how to manipulate the problem by arbitrary obstacles. Although both instances use the same mechanics, the skill you’re tested on is what defines the challenge you are meant to overcome. 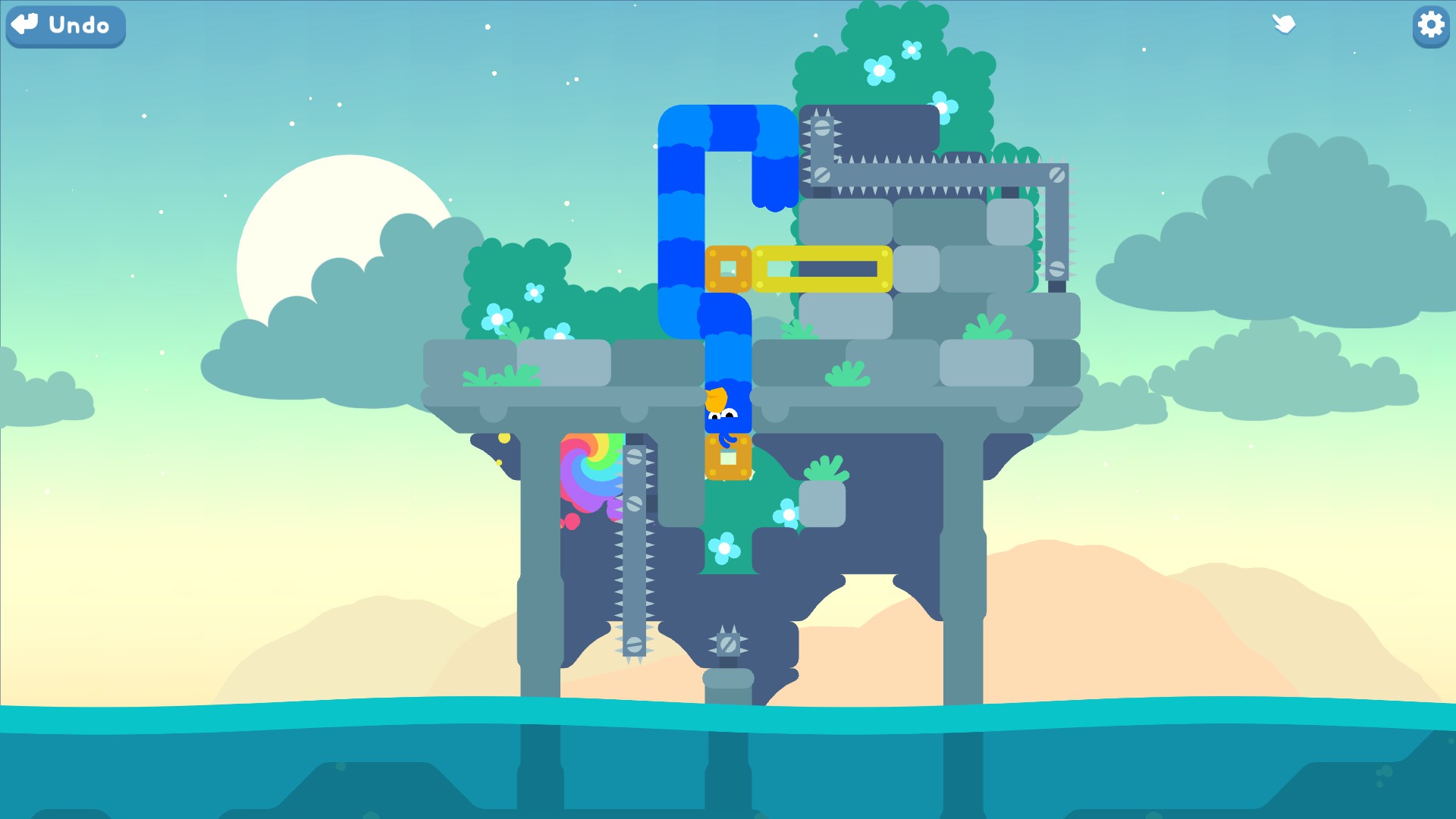 Puzzles in Snakebird range from both types of challenges, and the number of these puzzles varies by each area. Some levels will test you more on understanding new level gimmicks in “safe-environments” where you don’t have to meticulously plan three moves ahead, which are meant to be tutorials(movable pieces, teleporters, etc.) Other levels, however, focus your attention towards the wonky physics of the Snakebirds like how they can float on fruit, how they can make staircases for other Snakebirds, and how the placement of their last block can influence where they fall. These latter mechanics are why some people won’t click with these puzzles because the former puzzles set a different expectation of how to play, which leaves many players with the reaction, “How was I supposed to know how to do that!?” However, what is perhaps more aggravating than these shifts in focus is the open-level design and how it interferes with the player learning the subtleties of Snakebirds. 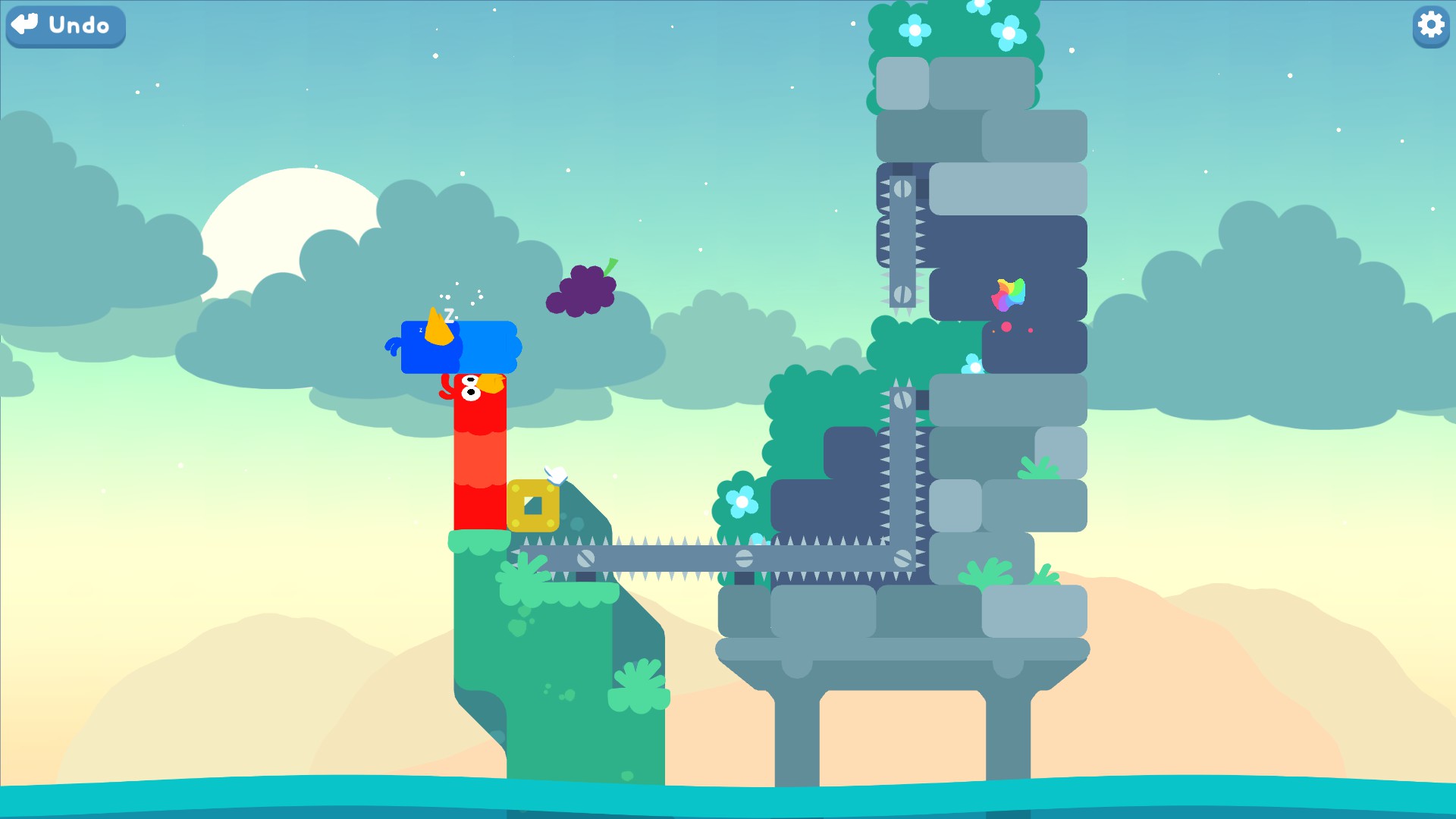 Sometimes the Narrower Path is the Best to Travel by

Sometimes offering choice can be to the player’s detriment if the open-level layout is not simple enough to guide confused players on the “intended” course. In addition, tutorials are not always the best solution, but creating roadblocks with one intended method with zero scaffolding can be far more aggravating if not handled properly. Unfortunately, the original Snakebird suffers from both problems despite having a map with a numerical set of fifty-two levels. 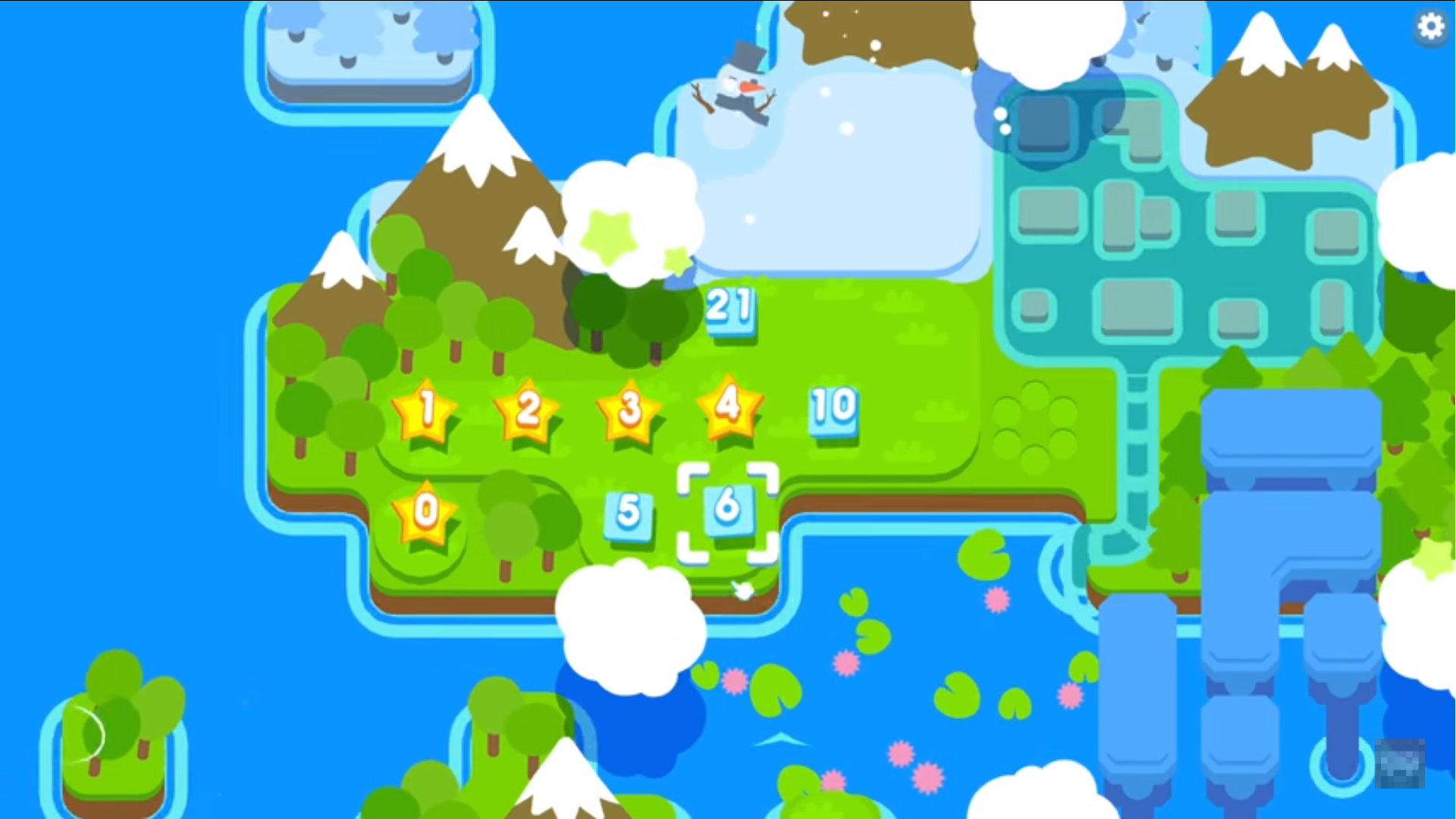 Unlike in the open-world design of The Witness where symbols on the map primed players with the type of puzzles in an area, Snakebird lacks any simple direction for the player. After you finish the initial three stages, the game opens up various puzzles to prevent the player from getting stuck as well as allowing the player to explore different types of puzzles. In most games, this idea would help the player from getting frustrated; however, because the puzzles can vary so wildly in what they ask from the player, this approach only leads to further confusion. For example, the puzzles you get after unlocking the open branches (5/6/10/21) all focus on controlling one Snakebird, but the levels they unlock focus on making harder puzzles for one Snakebird (11 and 12), controlling two Snakebirds (7, 9, 13-18) or using three Snakebirds (19) for one puzzle. Even if you do these puzzles in numerical order, this path does not mean the puzzles will follow one another in difficulty (or even the general location) as the task could be completely unrelated to the last.

Now part of the problem here is a matter of personal preferences as I find the game much easier to grasp when it adds new level-gimmicks before combining them with additional Snakebirds. To the game’s credit, there are sections where the game does teach you this way and it works just fine; it’s the non-linear nature of unlocking levels where the game breaks this sequence that causes problems. As a result, I never became comfortable with controlling more than two Snakebirds (and sometimes even two can be daunting.) If, however, there were more puzzles that gradually scaled up the challenge from building on previous ideas, then my experience would have been more favorable to these changes. This solution is exactly why Snakebird Primer is a more favorable place to start because it provides the succession of ideas the original desperately needed for players who didn’t catch on the first time around. Sometimes repetition, especially in mastering a puzzle game with so many little things to learn, can be a blessing in disguise. 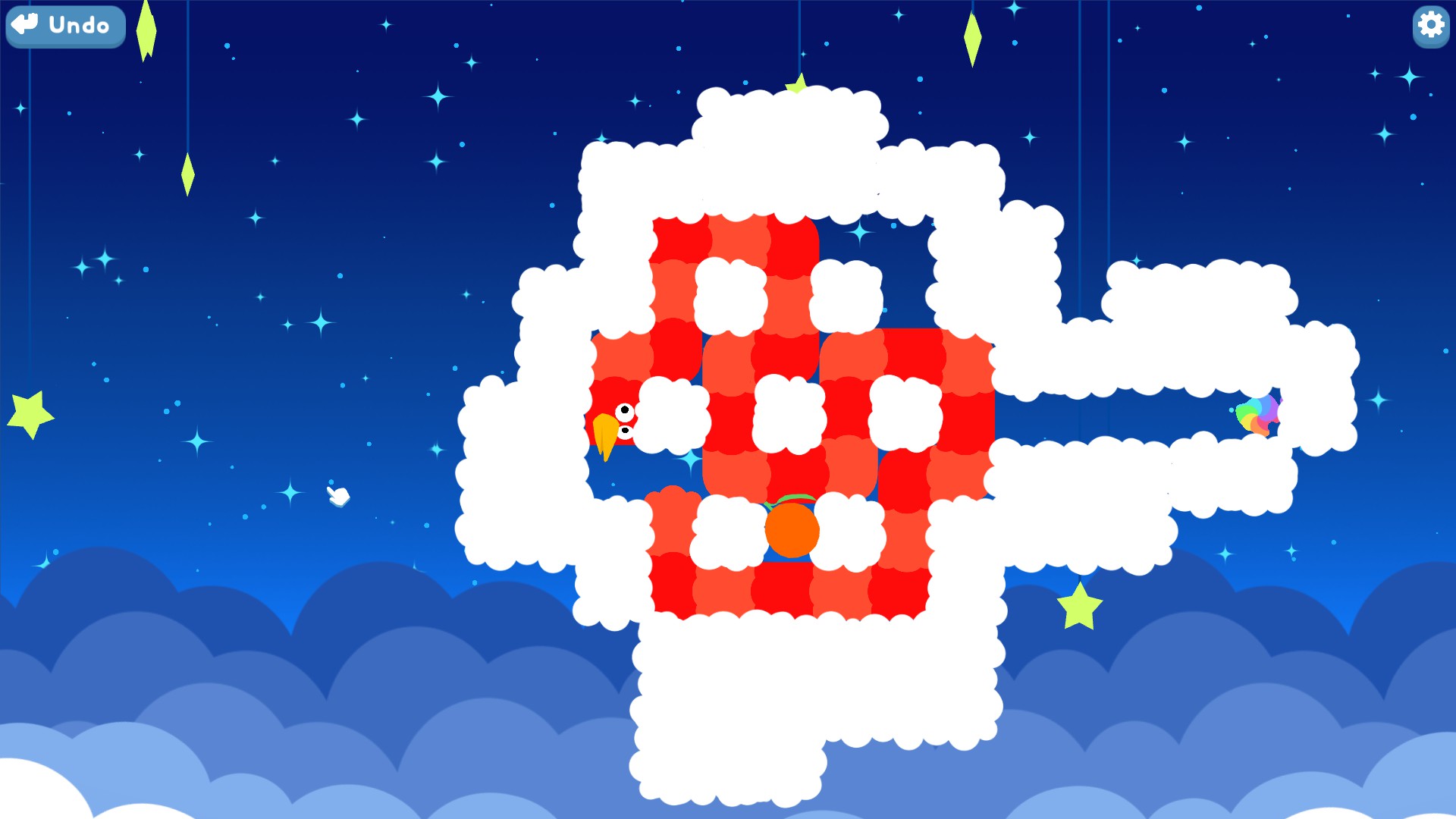 Verdict – The Uroboros of Puzzle Purgatory

At its core, and despite its many conveyance problems, Snakebirds has always been a charming game that I could never be upset with for too long. It’s precisely due to the beginner-friendly version that I can now appreciate this game in spite of itself, and, as a result, it’s where I would suggest anyone remotely interested to try first. (It would also be nice if there was a bundle for both games, but the combined price of $15 makes the whole experience comparable to other indie games.) In short, Snakebirds, like the symbol of the snake, often feels like you’re endlessly running in circles until you flip the bird at the game–or you realize the solution was staring at you all along with a simple change of perspectives.