Information finally came out for both Persona 5R and Persona 5S! First I’ll go over the speculation that I saw happen and then what actually was confirmed. If you just want to see what each game will be, just go past the announcement trailer video.

The speculation around Persona 5R was mostly revolved around it being an enhanced version of Persona 5, like Persona 3 FES and Persona 4 Golden. Having the ‘R’ mean Ruby after Persona 5‘s red aesthetic since Persona 4 Golden seemed to be named after it’s yellow aesthetic. Although this was dashed when the fact that Golden is actually referencing Golden Week, like how FES got it’s name from festival. So other name predictions went for Resolution, Rebellion, or Revolution (of course, you can’t not have joke names such as Racing and Reel). Other than Persona 5R being an enhanced version, it was also speculated that it could be a fighting spinoff called Persona 5 Rumble and weirdly enough be the Switch port. Fun fact, the Switch port speculation for Persona 5R actually confused me at the time and I thought Persona 5S was just people mixing up the letter (hopefully I wasn’t the only one).

After the teaser update, showing a mysterious girl that opposes what the Phantom Thieves does, more speculation came out. Most of what I saw was that this mysterious girl is going to be a female main character (a female Joker). This was mostly drawn out of the Super Smash Bros Ultimate (SSBU) datamine where a “Jane1” costume was found for Joker. The main argument against this was that this new character talked in the trailer so it most likely will be a new confidant (like Persona 4 Golden‘s Marie) or another party member.

Now after updates on when another update will come out, we finally know what Persona 5R is. And that is Persona 5 The Royal:

Personas 5 The Royal is indeed going to be an enhanced edition of Persona 5. Based on the official trailer, a lot is going to be added. First, the mysterious girl shown in the teaser is Kasumi Yoshizawa. Kasumi is a rhythmic gymnast who transfers to Shujin Academy around the time the MC does. While she does express that she wants people to solve their own problems rather than relying on other people, she joins the Phantom Thieves at some point. She doesn’t join to change hearts however, she joins for her own reason. What that reason will be is unknown, but it’s been theorized that she might become an antagonist (especially since she talks about stealing other’s dreams and Morgana talking about her granting dreams). 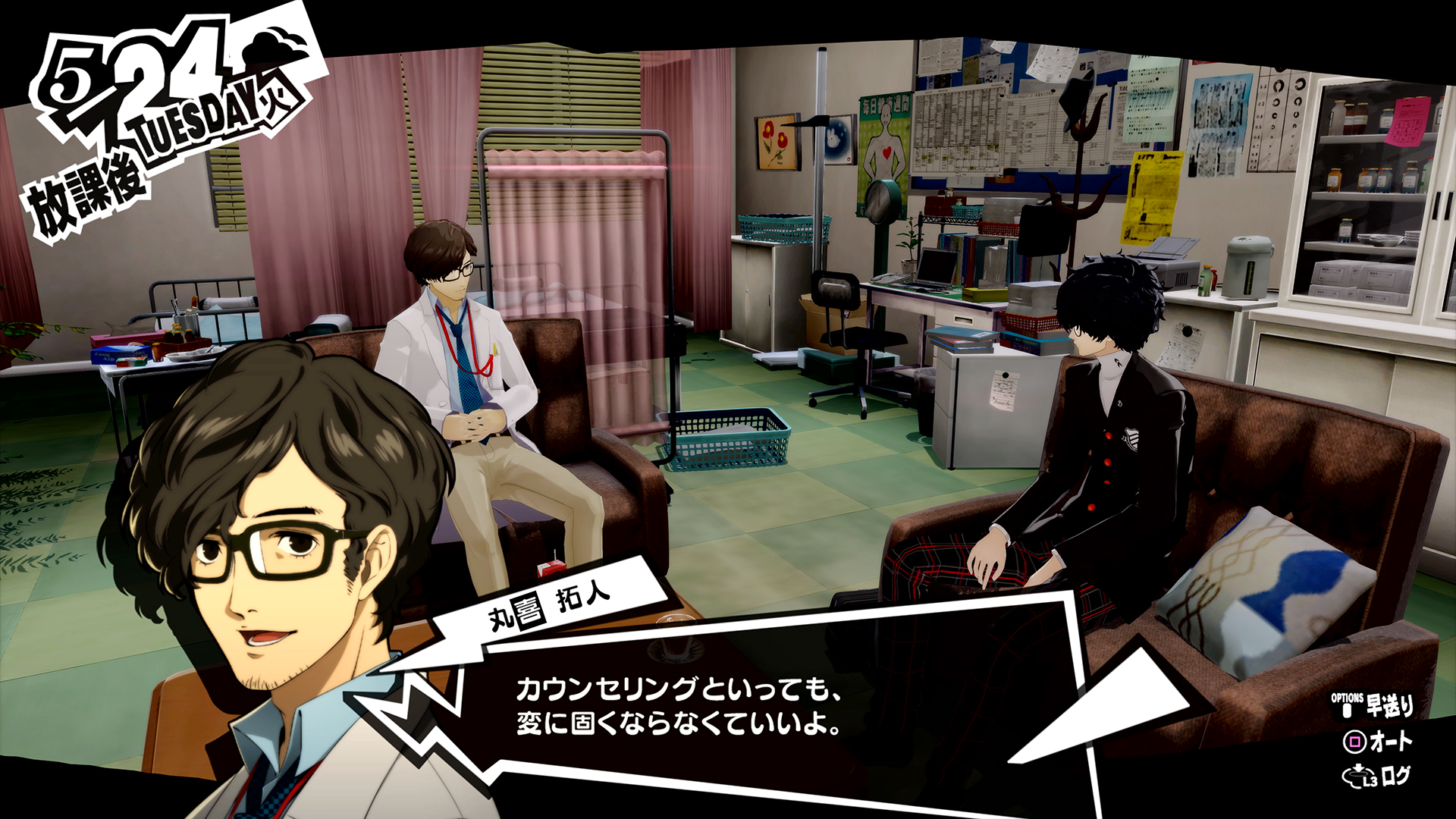 Apart from Kasumi, we also have two new male characters. First we have Takuto Maruki who’s a part-time counsellor appointed after the April incident. The Shujin students seem to be fond of him since he’s a good listener and gives tactful advice. Then we have the kinda new character dubbed Ikemen (or good-looking man). So far, there’s no info on him, but it’s believed that he’s Morgana’s human form based on his blue eyes and hair, yellow necklace, and translations showing that he has a similar speech pattern. The most telling is his usage of wagahai, which is an uncommon way to say “I” that suggests nobility and is most likely referencing a book called Wagahai wa Neko de aru (or I am a cat). 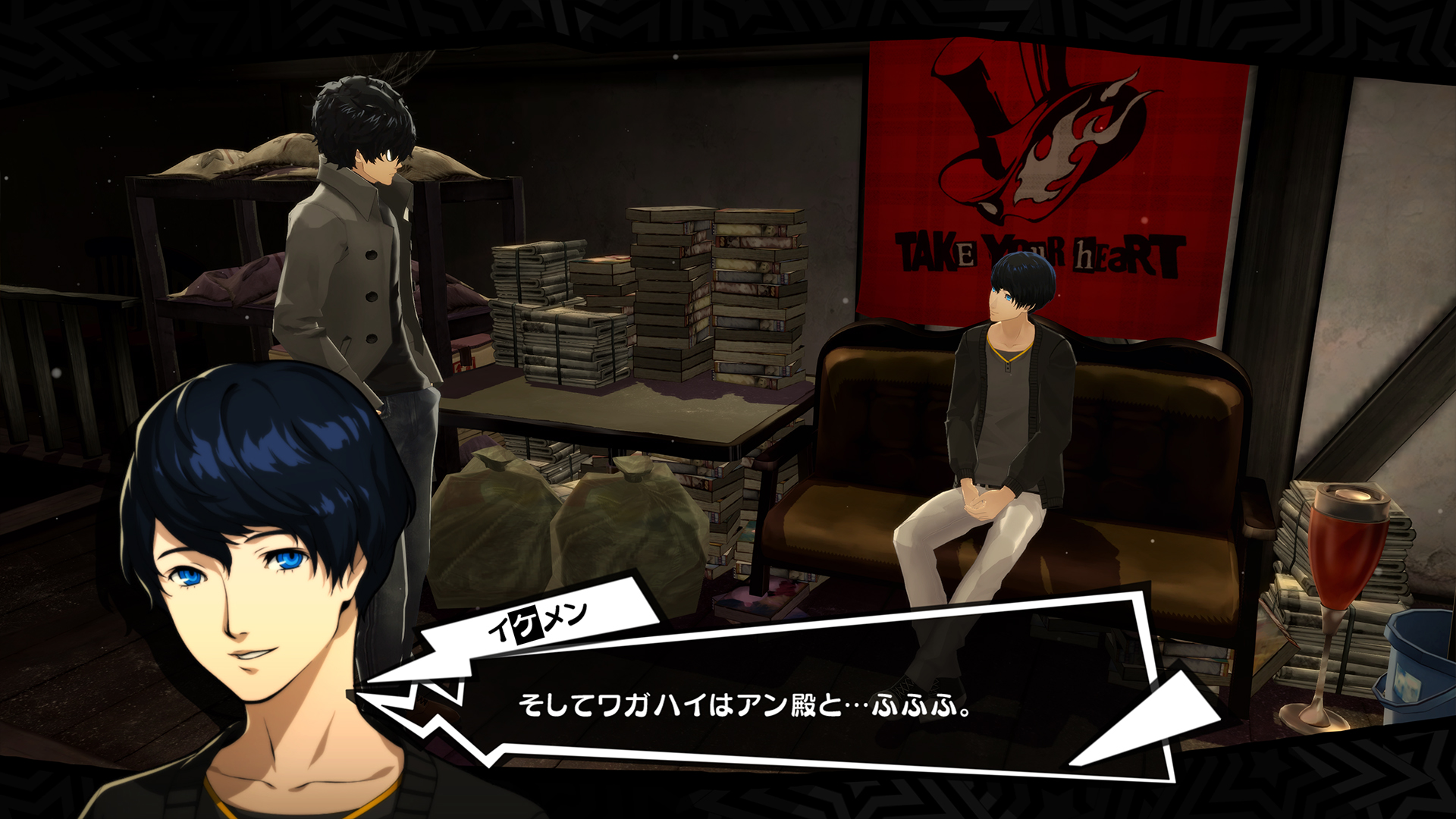 It also seems like some palace puzzles will be changed/added due to the inclusion of a grappling hook (which he always had but never used in-game). There’s a new puzzle in Kamoshida’s Palace and Joker uses his grappling hook on a moving platform in Okumura’s Palace. We also got a new Futaba All Out Attack where she drops a bomb (with herself in it?). Unison Attacks from Persona 4 Golden also makes an appearance with a Haru and Morgana team up and Ryuji and Makato team up. Based on some images on p5r.jp, it seems like enemies can have a purple aura, new items can be found, and strange veins will appear on the Mementos entrance. 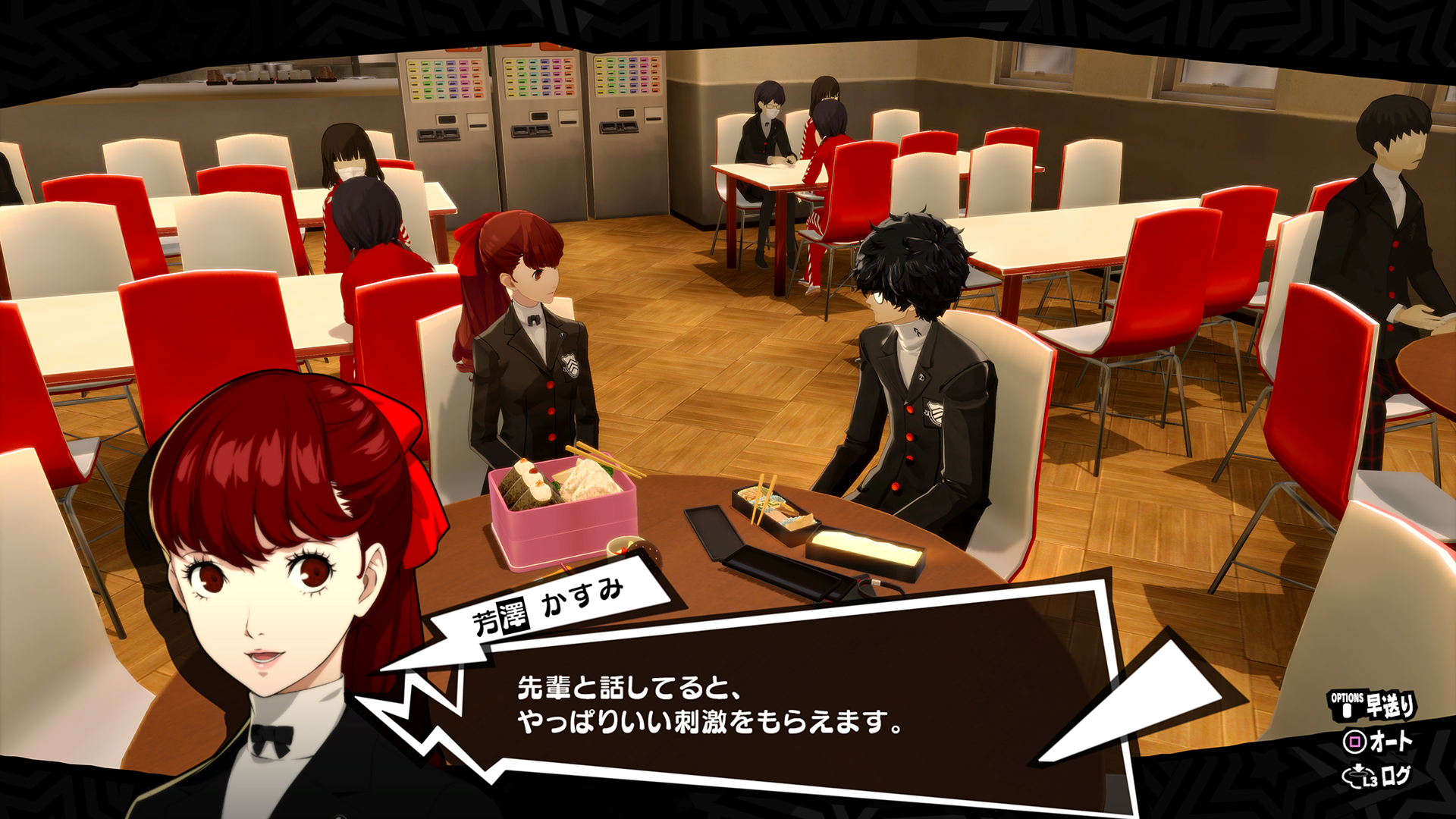 In addition, there is going to be another semester added to the existing two, allowing for more events like a sports day headed my Makoto and a cafe event with MC, Kasumi, and Goro. There even seems to include a new feature where you can have lunch with a character, which I learned was supposed to be an intended feature before it was removed. There’s also a brand new location called Kichijoji that’ll include new hangout spots like a place where the Phantom Thieves can play darts or pool and an aquarium date spot. It even looks like new texts messages with pictures will be available as well as the ability to bring Caroline and Justine out of the Velvet Room (much like Marie in Persona 4 Golden). 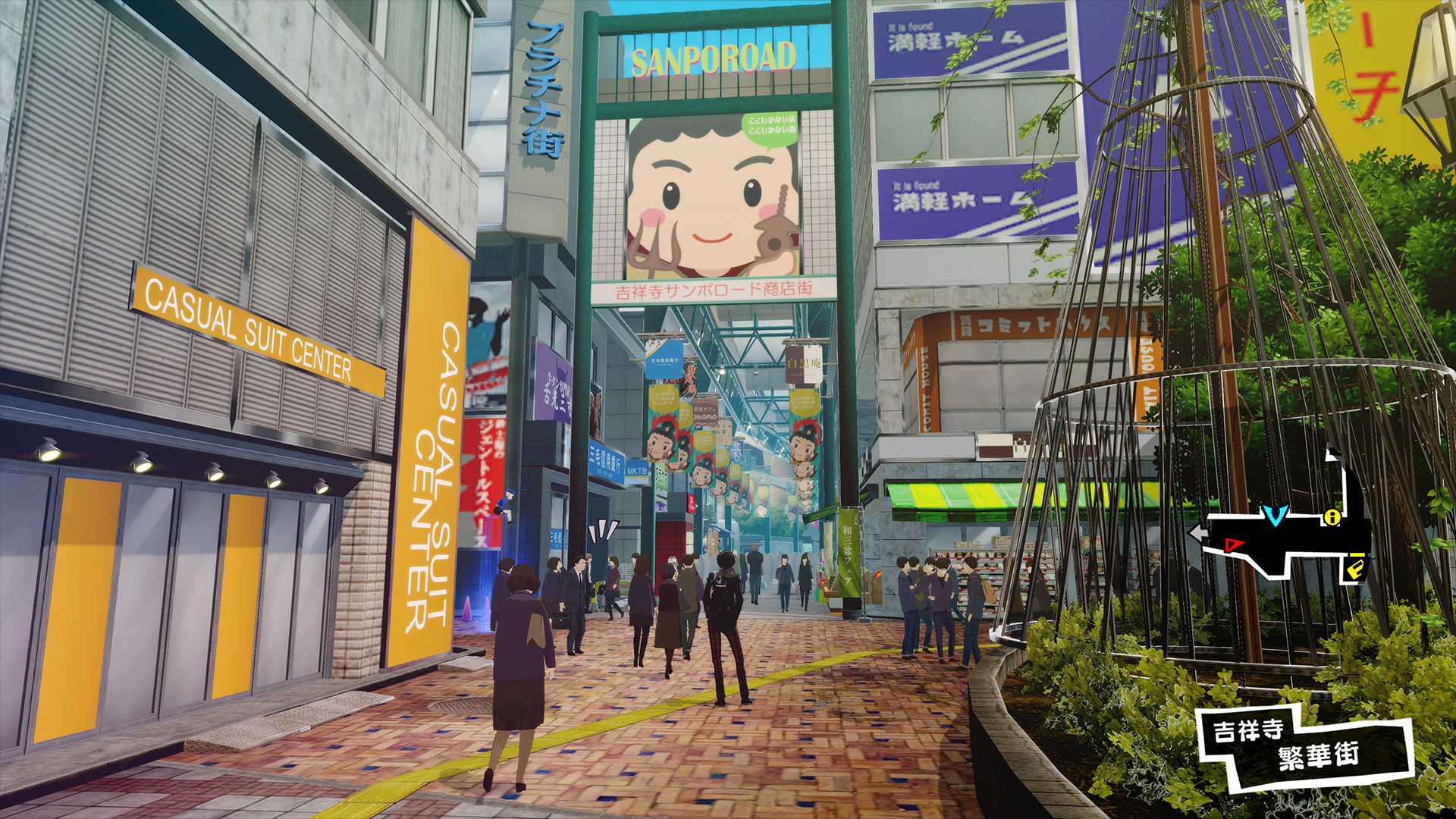 Lastly, there will be new Network functionalities, but not much is known about this yet.

More information about Persona 5 The Royal is going to be revealed on May 9th.

And then we have the once elusive Persona 5S.

For Persona 5S, the speculation was mainly on it being a Switch port. Equating the ‘S’ to mean Switch as well as Joker’s inclusion in SSBU obviously teasing to something. It also didn’t help that an image of a Best Buy Switch listing for Persona 5 also popped up. This speculation also drew on how Persona 3 and 4 were put on Sony’s handheld console, the (sadly, now dead) PSP/PSVita. Now that the PSVita is officially dead, the Switch would be a good candidate. When Kasumi was teased, it was also thought that she would be the female MC in the port, much like how Persona 3 Portable had a female option.

The main argument against these speculations was that, well, the mainline Persona games were never released on anything but on Sony consoles.

On April 25th, news about what Persona 5S was revealed:

Well, this sure was a surprise for everyone. Persona 5S is Persona 5 Scramble: The Phantom Strikers, a musou action rpg from Omega Forge. Apart from Persona 5 Scramble being a Dynasty Warriors-esque game, nothing else is known. Scramble will also release on Switch and PS4, so I guess the speculations were half right.

While I do have both a Switch and a PS4 I am a little bit bummed. Even though I didn’t buy into the Switch port rumors, I can’t deny that it would be great to have it on a handheld console. In fact, I actually wished it was on a handheld console when I was originally playing it so I could have played it anywhere. The main reason I finished it so late was because I was busy and the only times I had some extra time (like in between classes) was when I wasn’t home. I was totally ready to double dip for Persona 5R, which I don’t really do.

I will definitely pick up Persona 5 The Royal, though not so sure about Persona 5  Scramble (or anyone else on the SOQ team). I never played any Dynasty Warriors (or Dynasty Warriors-esque) games before and I have a tendency to avoid fighting games (ignore me owning Persona 4 Arena and SSBU lol). I’m a little interested, but who knows till Scramble releases.

Persona 5 The Royal is planned to have a 2020 western release and Persona 5 Scramble has no release date as of yet. If you want to watch the Persona Super Live show, here’s an upload of Day 1 and Day 2.