Fate Hunters is like a more serious Monster Slayers …

… but not quite as good.

Fate Hunters is a single-player card game / deck builder in a fantasy setting.

There’s no background story, or at least not yet, but from what I’ve picked up, your task as some sort of fantasy hero type is to climb a tower inhabited by dangerous creatures, each level of which is guarded by a powerful enemy, until you reach the top and vanquish the big baddy at the end. I’d love a bit more story before the game leaves Early Access, but what’s here now provides a framework for the game, anyway.

While Fate Hunters looks and sounds okay, presentation overall is a little lacking. 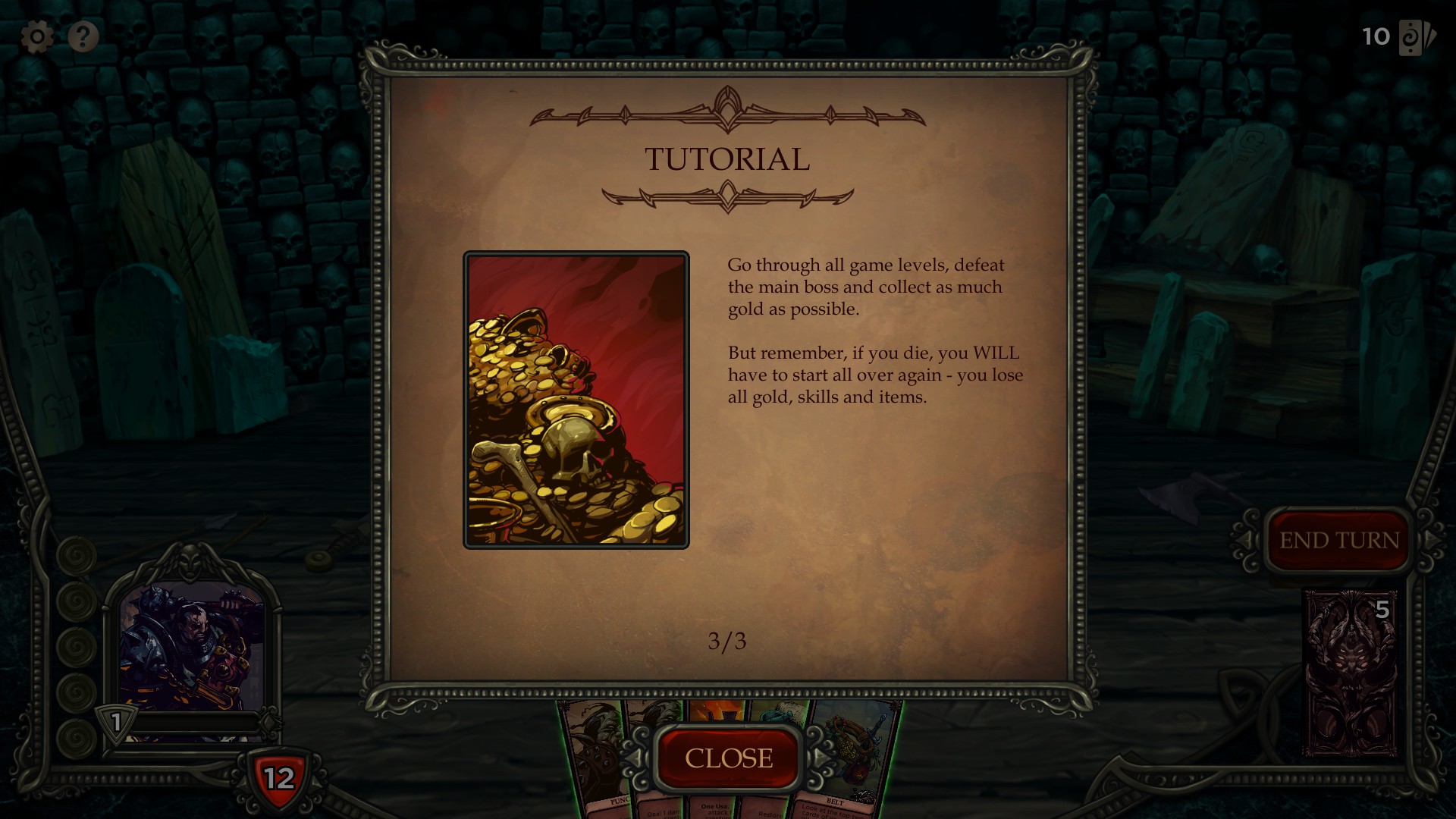 Card art is nice, with most cards that I’ve seen drawn in a consistent style — only the fate/tarot cards stand out to me as not quite fitting in. For the most part, it’s a sort of dark-fantasy cartoon style, of the sort you might see in a pen-and-paper RPG book, though in full colour. Most cards have consistent text, but there are a few that don’t read quite right. Tooltips are available almost everywhere and again are mostly good, but a few may have you scratching your head the first few times you encounter them.

Each round is played with the cards displayed over a static background showing a room in the tower. While reasonably colourful and pleasant enough, the rooms quickly begin to all look the same, with only few a few set pieces of furniture or decoration breaking up the monotony. It doesn’t significantly detract from the game, but a bit of animation and variation would have been a nice touch.

Card animations are very minimal, with cards moving to attack and only a few different spell or action animations available. While they’re good enough, I think a bit more variation and pizazz would go a long way. Some of these animations seem to cause significant pauses in the gameplay, too, the most noticeable that I found being when playing a stun card for the first time; the game paused for a good couple of seconds on my i7 / GTX1070 – based laptop. 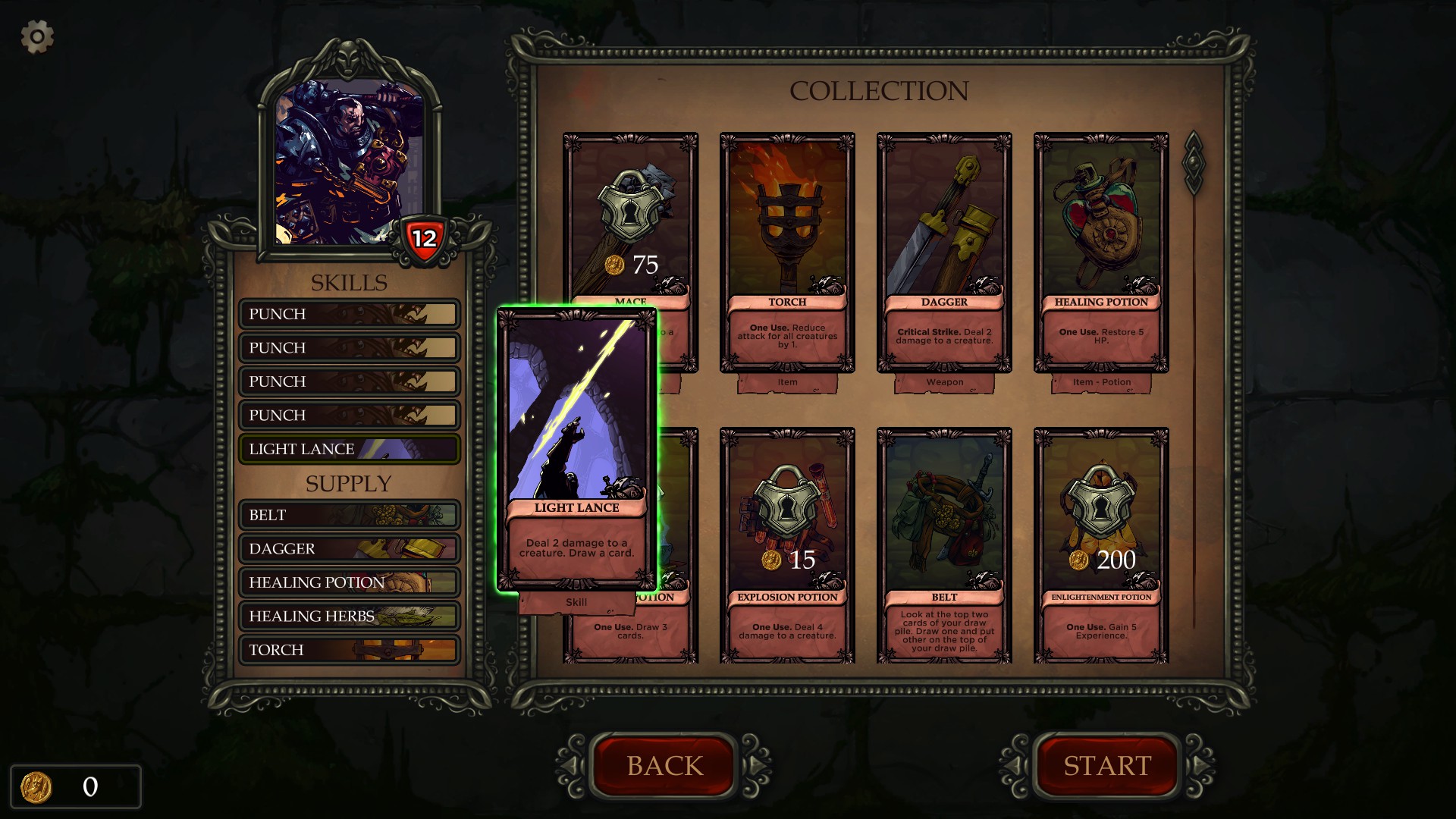 The in-game writing is not great. It’s not terrible, but it could be a lot better, with grammatical errors and poorly written sentences here and there. Given this and the fact that the game supports seven languages I’m assuming English is a second language for the developers and they haven’t had a native English speaker edit it yet. I hope this is improved before final release.

I think there are only two music tracks, but they’re both really good. The normal background music is a sort of spooky-sounding rhythmic track that gradually works its way from near-silence to the forefront of attention, but never quite interfering with the player’s focus. The boss battle music is much more dramatic; it sounds to me like it’s been heavily influenced by “O Fortuna” (the music from Excalibur).

Sound effects are minimal and a bit disappointing: whooshes for cards, clanking weapons, and a couple of other sounds that are reused for multiple, inconsistent effects. Some unique creature sounds and far more individual card effect sounds would really help to make the game world feel more alive. 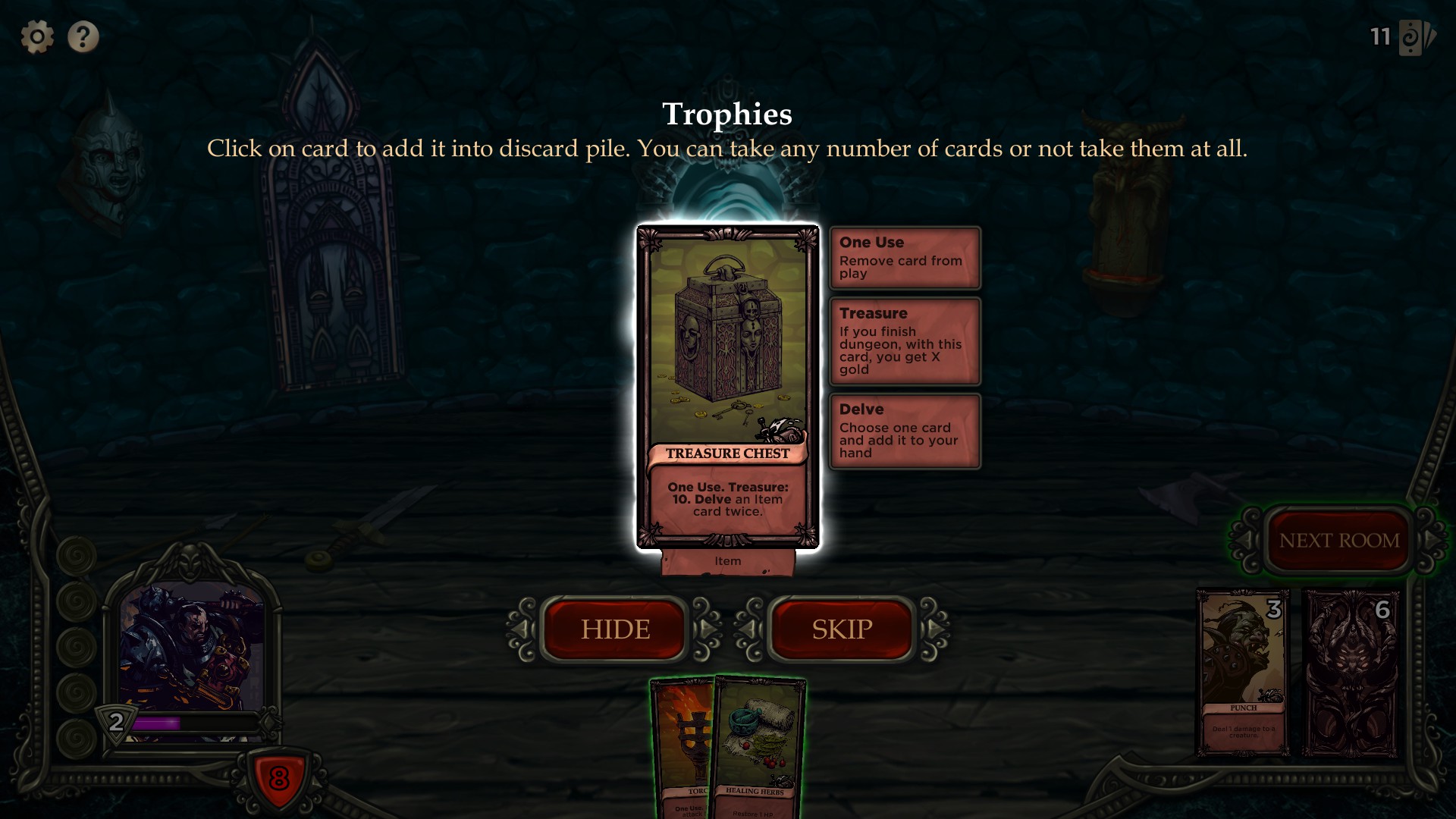 Fate Hunters’ basic idea is extremely simple. Your quest to defeat the tower is divided into multiple levels, each of which has a number of random creature rooms and a random boss battle. Enemies are mainly traditional fantasy creatures, though there are some that break the mould a bit.

Room battles are resolved with cards, forming the core gameplay loop. Each room spawns between one and seven creatures, each of which has attack (damage) and defence (health) values, as well as sometimes having a number of special abilities or attributes. Combat is turn-based, beginning with your turn.

On your turn you draw five cards from your draw deck and play as many as you can or want to, each one normally moving to your discard deck afterwards. Cards are broadly divided into skills, weapons, treasure, and items, but there’s some confusion between card effects that target one type or another. Typically effects either protect you or damage your enemies, or allow some sort of hand manipulation: drawing extra cards and that sort of thing. If your draw deck becomes empty, then all your discards are shuffled back in; there’s no way to run out.

Once played all your cards you press Next Turn and your enemies attack. AI is very simple as it has only two options available to it: attack you or not. Of course, it always does. 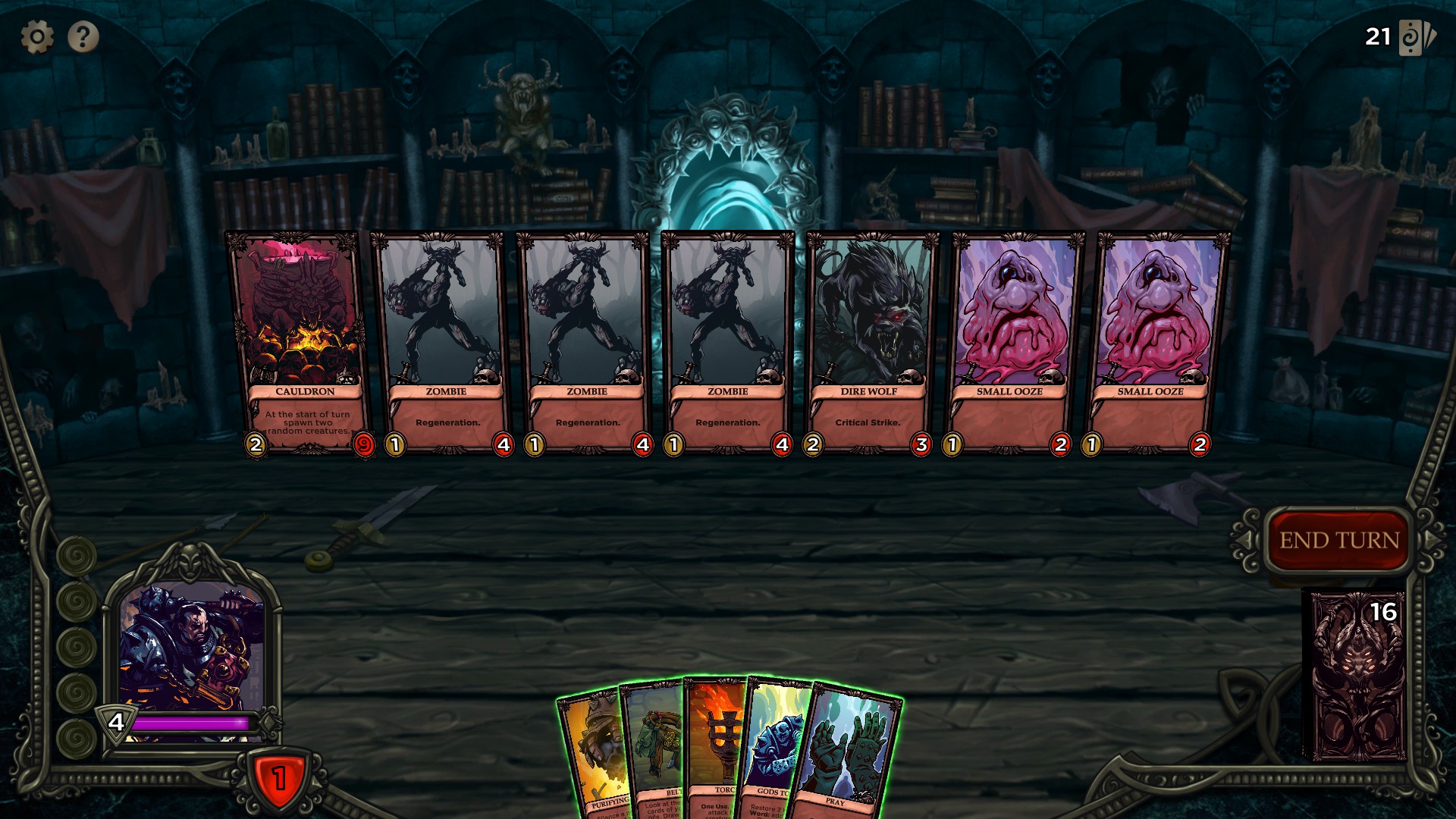 The battle continues in this fashion until either you or your enemies are dead. If it’s your enemies then you may get some nice loot (random cards), which you can choose to take or not, with your choice usually made based on how large and unwieldy you want your deck to become. If you die, you lose everything and have to start the game again at level 1.

Killing enemies nets you experience points. Gain enough and you go up a level, giving you a choice of one of three new cards related to your character’s class, but doesn’t otherwise affect your abilities or survivability. 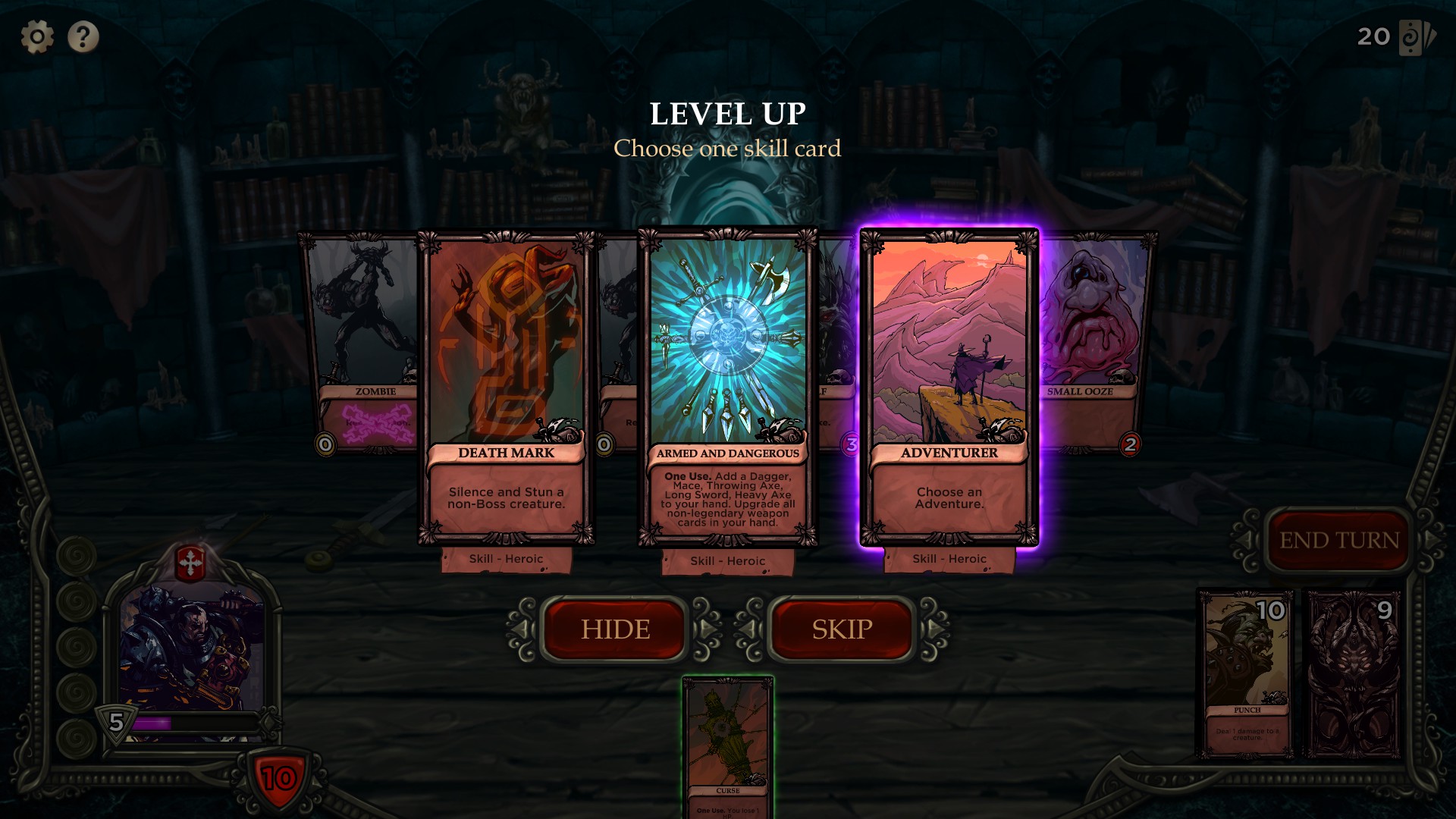 If you defeat the level boss you can choose to either restart the game, taking any treasure you’ve found to spend on meta-progression: unlocking new starting cards or three of the four locked player characters (the fourth is unlocked only by defeating a randomly spawning enemy) — or you can continue to the next tower level. In the latter case you get five “Fate Points” which you can spend on temporary character progression: passive abilities, healing, removal of a card, or a chance at a rare card.

The game has rogue-like elements such as perma-death and procedural generation. RNG features very heavily — probably a bit too heavily given that the only way to improve your character is through randomly dropped cards, and opportunities to remove cards are few and far between. It’s all too easy to have a great run ended by a short series of bad card draws or single unlucky room, particularly given that a couple of the creatures are simply too powerful. The Primal Totem, for example, is much worse than most bosses. 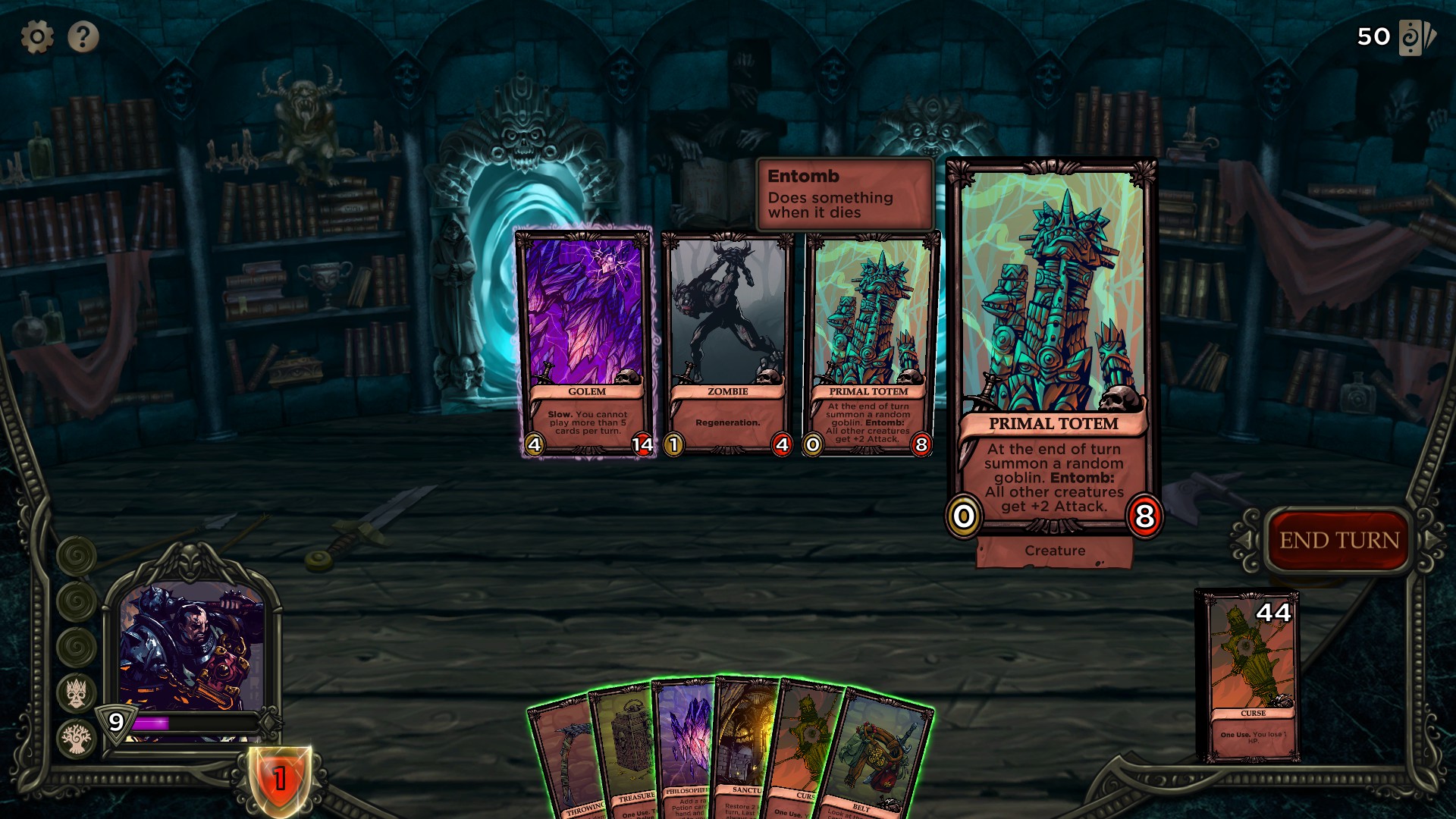 There’s a reasonable number of cards, and some drops seem to be influenced by your choice of character class. While on the surface each class only differs in health and the skills available, I’ve found that they’re actually quite different in play style, though the RNG features heavily in how a deck develops, regardless. I’d like to see a few more options for meta progression, and perhaps at least a small reward for a lengthy, but failed run. As it is a failed run is a complete waste of time, which is a bit of a turn off for me.

Given that the game is in Early Access I expect a few bugs, and Fate Hunters delivers, along with some poor or inconsistent card explanations. Card definitions need to be tightened: “Item” sometimes means more than item cards, “discard” doesn’t always mean what you think it should, and “Holy Fire” and “Throwing Axe” don’t always work as written, especially in combination with other cards.

But these are all pretty minor and easily resolved; an editing pass for consistency and a bit more time in QA would fix most of them. 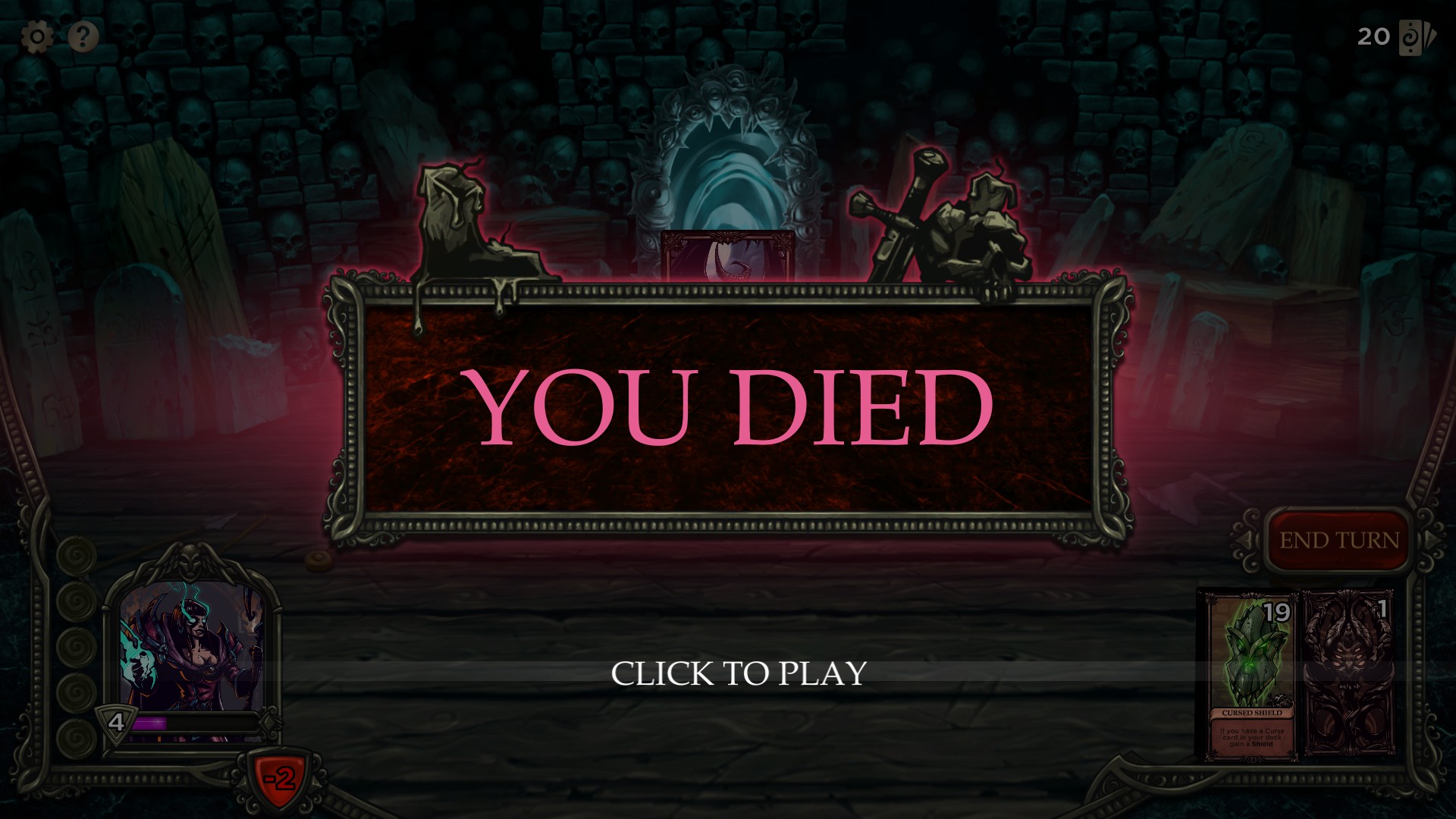 Fate Hunters is a solid game. It’s fun to play and has that “just one more game” attraction, but RNG is a little too pervasive. Compared with Monster Slayers — my go-to in this type of game — Fate Hunters is more expensive and less polished, while its tactics are simpler, RNG more overwhelming, and presentation lacking.

It’s not a bad game by any means, and I’ve had a fun with it, but there are better games of this type for less money.