Good thing I didn’t eat anything before playing.

It’s no debate that puking is the worst. Puking yourself is unpleasant and even hearing someone puke (whether it’s irl or someone fake puking on a show) is just as worse. Well… who knew that a game could make it look kind of cute.

You play as Gilbert, the three eyed child who wishes to attend a birthday party he can see from his window. Before he makes any move, his Aunt Doris shoots it down and forbids him from going (and even looking at the bouncing house). In anger, Gilbert leaps out of his window and right into a giant egg causing his egg allergy to kick into effect for the rest of the game. It also doesn’t help that a giant chicken now has vengeance on the mind. On the bright side, he didn’t break any of his bones and his desire to attend the party is overriding puke disgust (or perhaps he’s not that bothered by it). 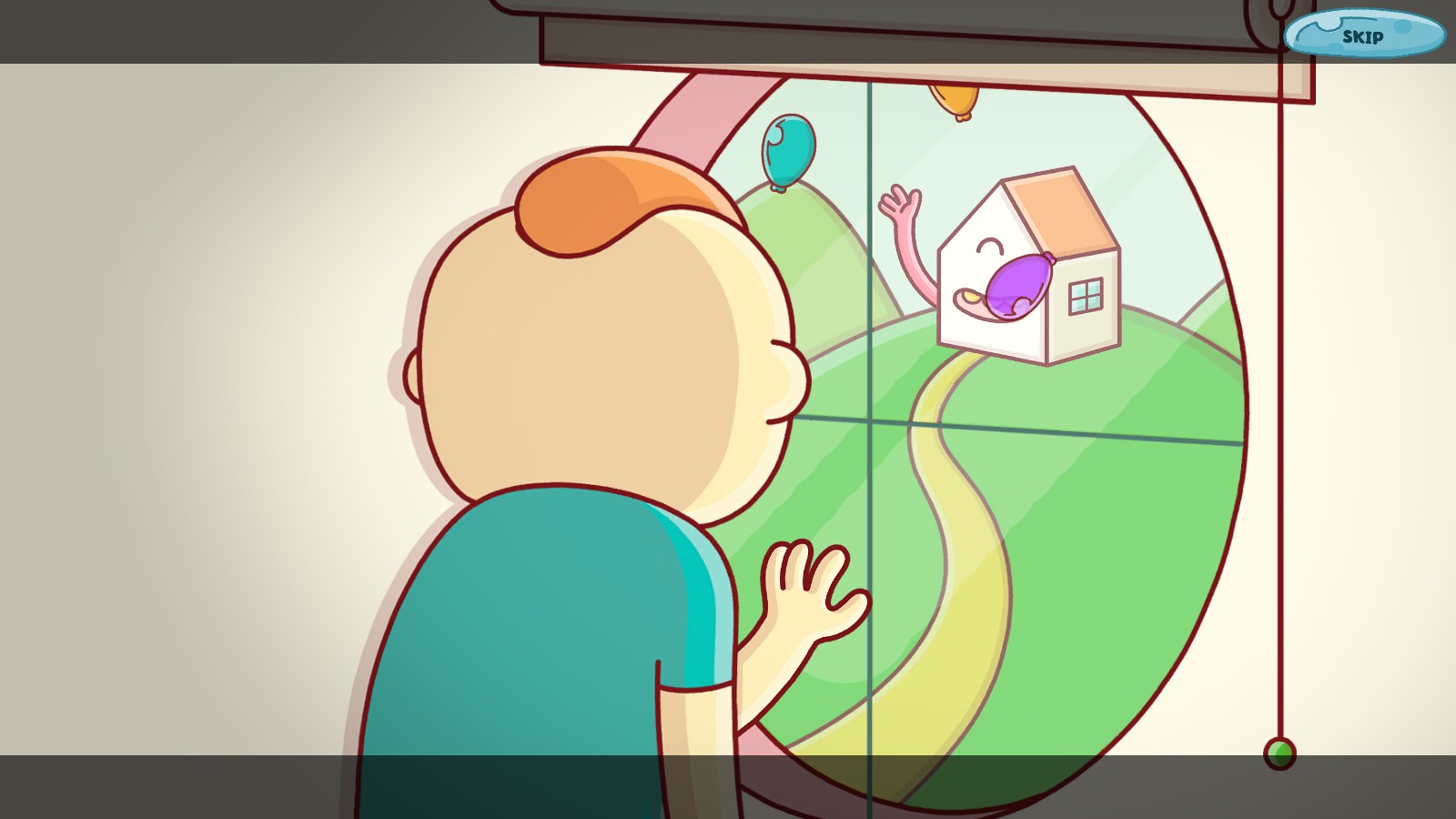 In Gilbert’s journey to that birthday party, you’ll have to go through 15 levels. The first thing you will notice is that Gilbert runs automatically when nudged into a particular direction (using arrow keys or your controller’s bumpers). Once you get going, pressing to go the current direction causes Gilbert to vomit, sending him up in the air, while switching directions also causes some vomit to spill out. Be sure to avoid falling into pits, running into sharp saws, or those evil chickens (which you can jump onto to neutralize) or else Gilbert won’t be able to continue and puke all over your screen. 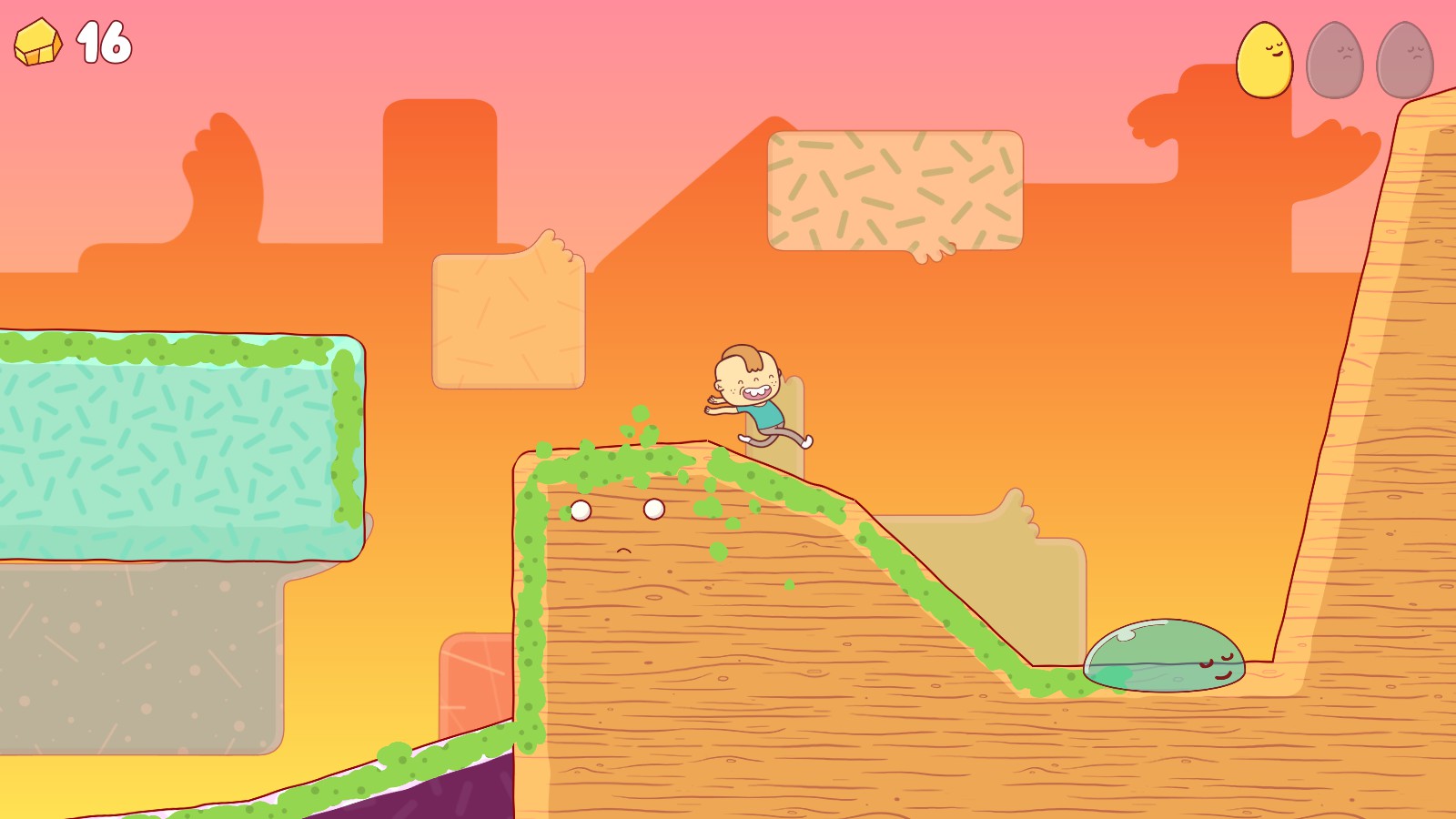 As you’re puking through each level, you’ll also come across (mandatory?) collectibles in the form of golden nuggets and eggs. Golden nuggets are more plentiful, acting as a way to guide you while also sometimes placed in difficult areas. Some levels do include bird nests that, for a short time, transports you to a nugget filled area. In contrast, there are only three golden eggs in each level. Some are visible in your normal path, while others will need you to explore some side areas. These are counted at the end of each level, giving you a star if you collect all golden eggs and at least 50 golden nuggets. If you don’t, you’re penalized 30 sec for each missing egg and 1 sec for each missing nugget. 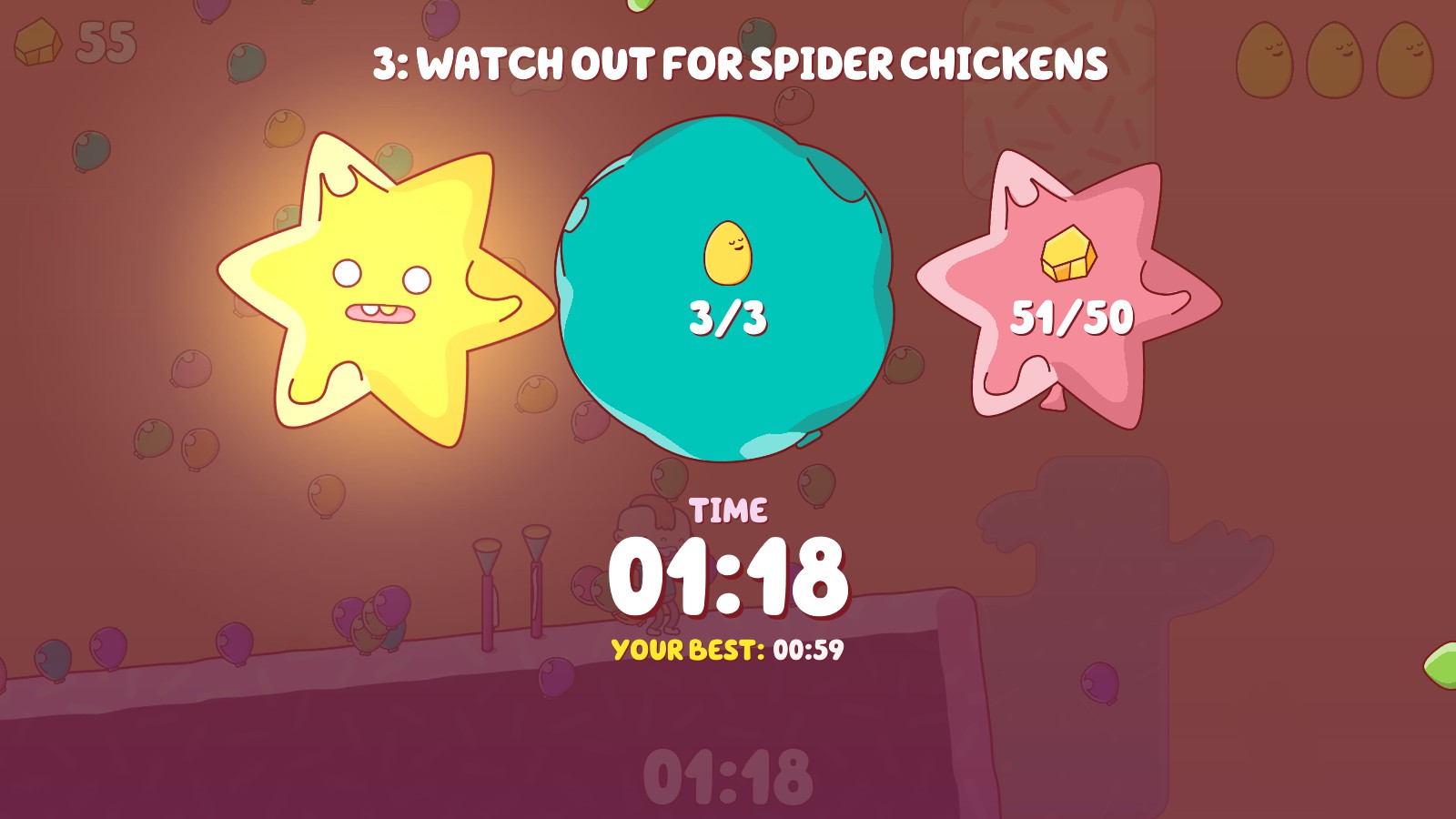 I’m a little iffy on this aspect since getting all three stars should be enough to convince players to replay a level as well as getting the best possible time, but it also makes each level longer and more difficult. It should also be noted that there are no leaderboards, so unless a friend also has Eggggg, you’ll just compete with yourself. If it did, having separate leaderboards for a regular and all collectible run would make this the best of both worlds. I have seen other games doing it this way (The King’s Bird comes to mind) and others, including myself, do try to compete on both leaderboards.

You can also strive to find a secret balloon in each level as well. These are difficult to find and you probably won’t notice till you actually do (in fact I thought the bird nests was the secret at first). These secrets are hidden until you jump to a specific spot (usually out of the way) that triggers a chicken-like sound. Then you’ll have to find a weird, pink creature to transport to an area for a short amount of time to get a balloon. If you die or the time runs out, you’ll have to try again. At the end of the level, a letter is revealed on the balloon and looks like it will spell something on the level hub if you get them all. 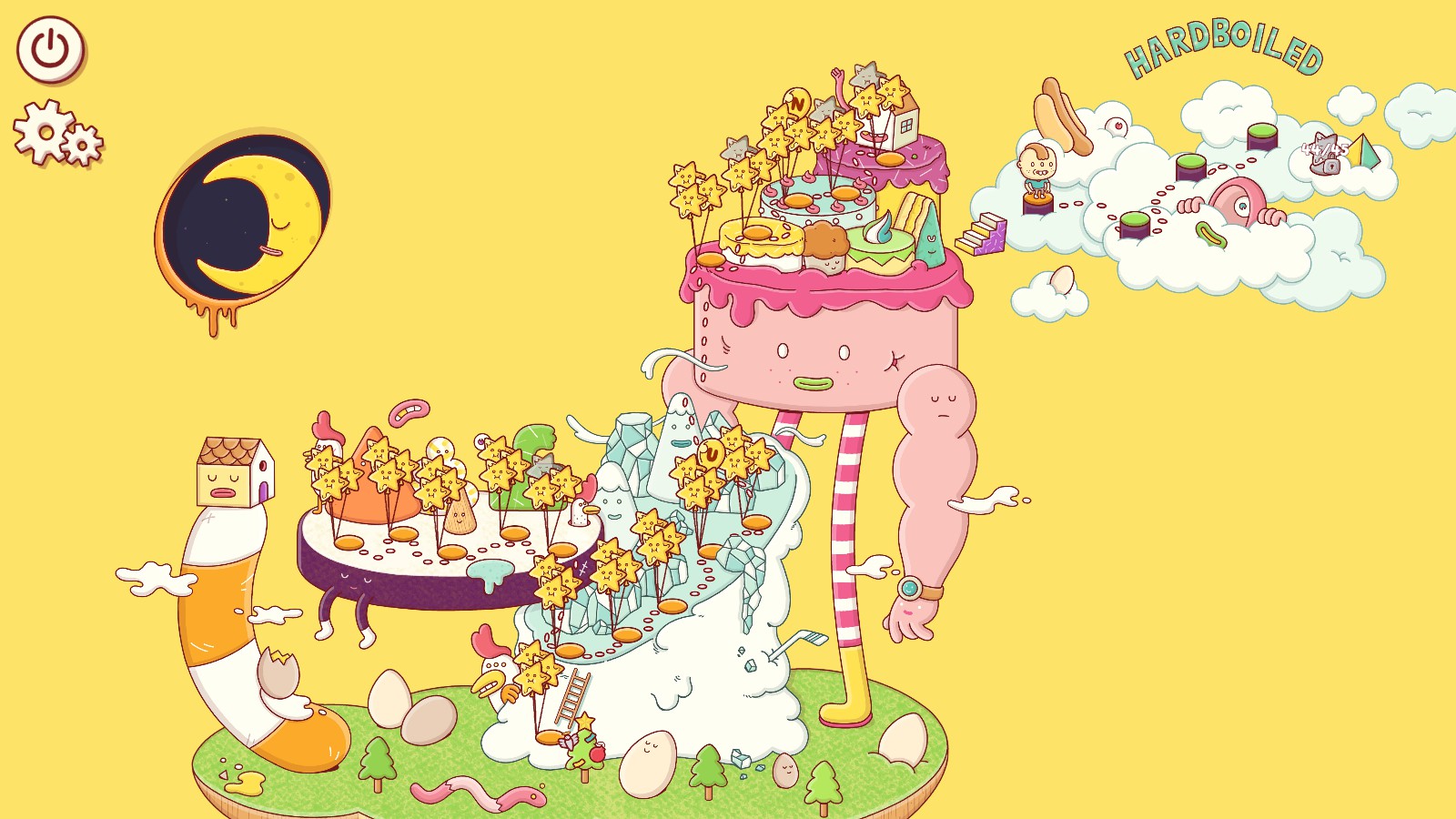 Once you finally get to that party, five Hardboiled levels will open up. Though, unless you have enough stars they’ll be locked till you do. These challenge levels are exactly what you expect. If you thought the other levels were easy and wanted more of a challenge, you’ll have a field day here. I haven’t (and probably won’t) beat any of these levels, but each of them focus on a theme with some putting emphasis on a specific mechanic throughout. If you want even more of a challenge, and perhaps don’t want to wait till you complete the initial 15 levels, you also have night levels (or Midnight Snack levels as it’s called on mobile). You can access these anytime by clicking the sun and it will put in more obstacles and more enemies than the level originally had. I’m not sure if these include the secret balloons as well, though. 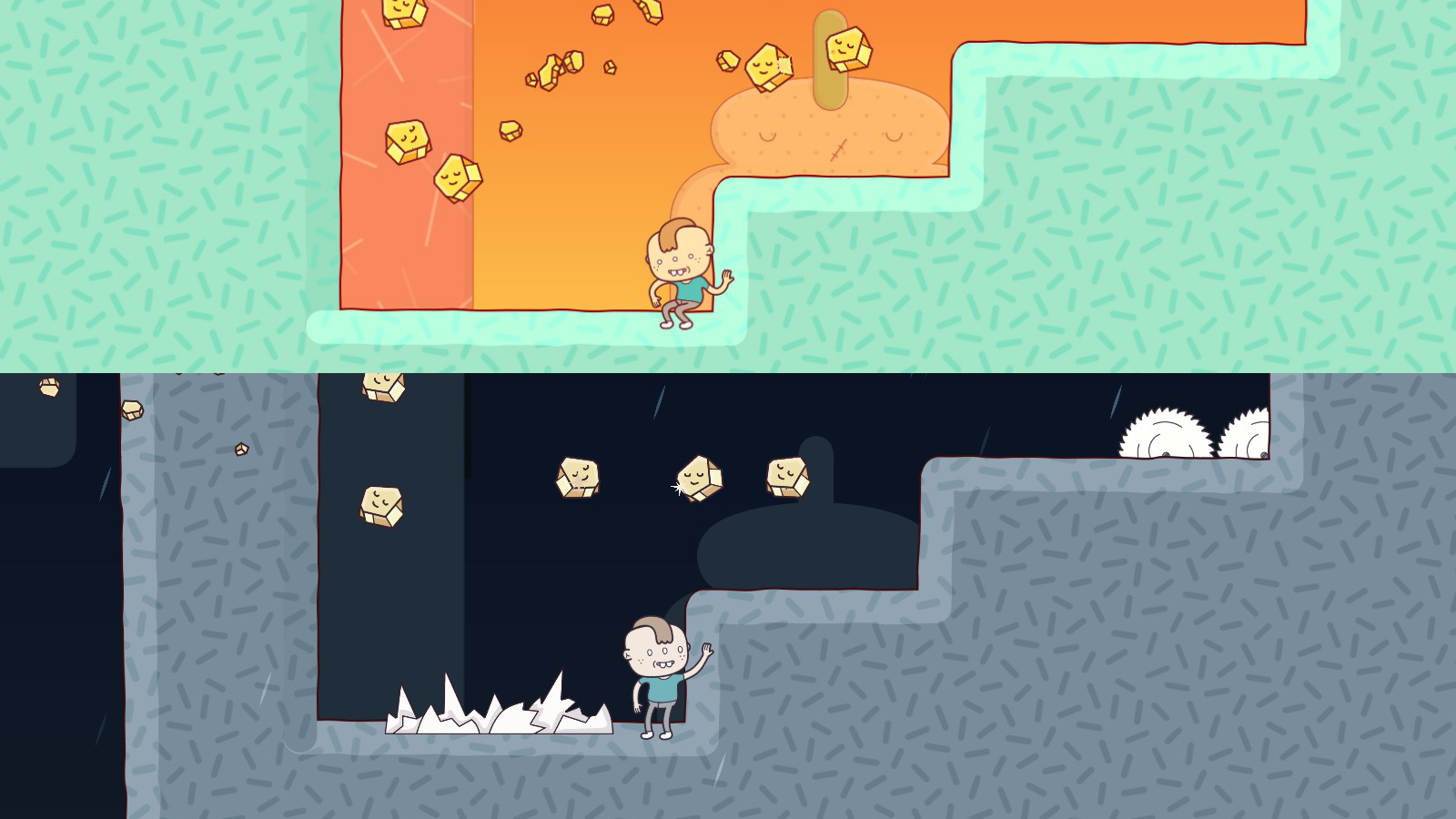 While the controls are responsive, I actually grew to dislike it. The majority of the levels are designed around autorun, and the later levels introduce disappearing and moving platforms. Since Gilbert can’t stay still and slides a bit when changing directions, this causes the control scheme to be frustrating. Though, I have a feeling that these controls feel a bit better on mobile since it was originally developed for it.

Having an Adventure Time-esque style, everything here is vibrant and colorful with mostly everything having some kind of pattern. While this most likely serves as a way for players to distinguish them from the background and from other platforms (if overlayed), it also subtly makes the vomit blend in. Weirdly making it part of the environment. Speaking of the environment, some even seem sentient as you will come across platforms that will frown or have faces of disgust when puke gets on them. 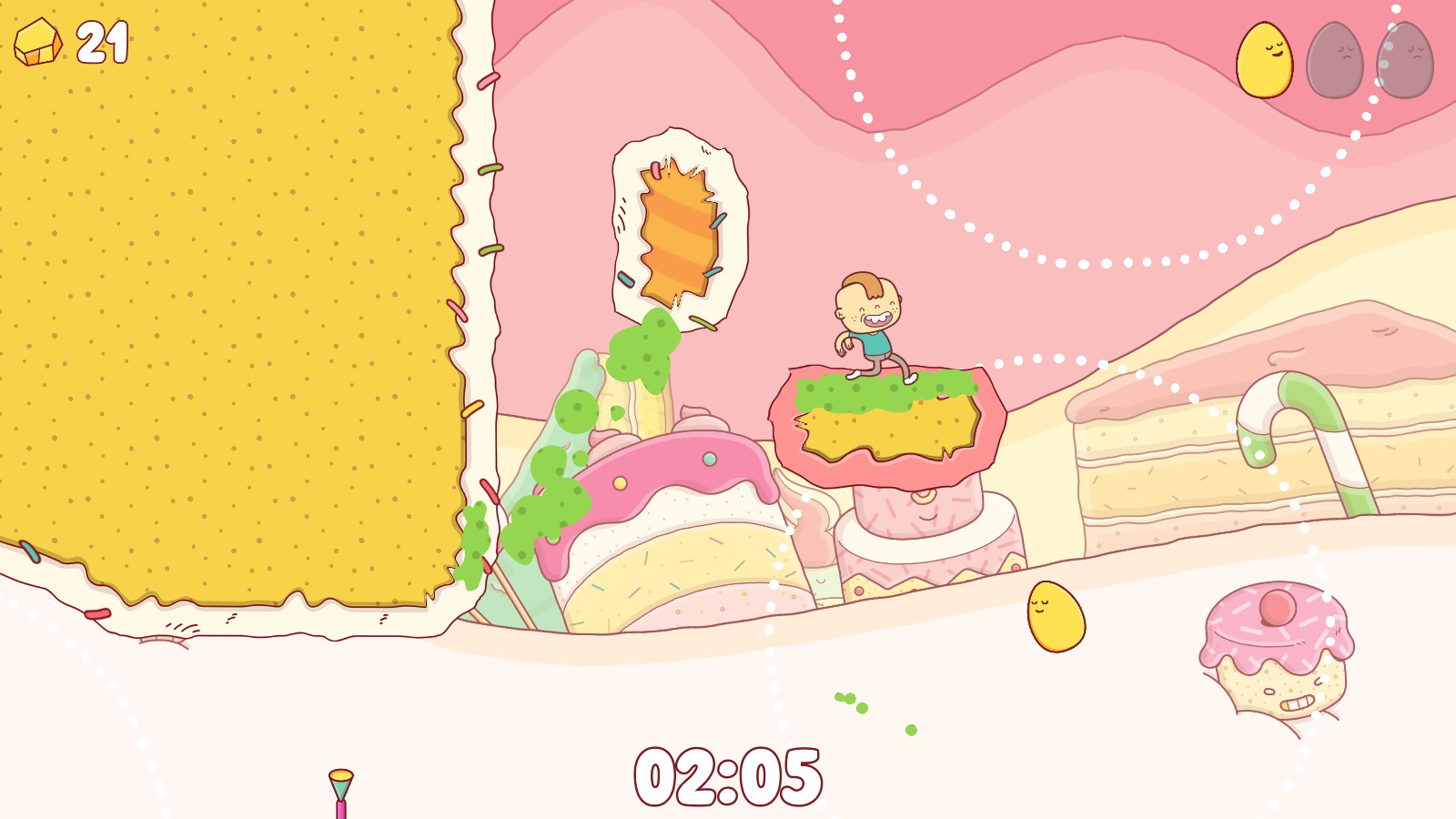 Unless you’re sure you want to go full in with Eggggg – The Platform Puker, meaning getting all three stars and the secret in every level and striving for the best possible time, I would hold off. While Eggggg is a fun and decent game, even if you get it on sale you might not get the fill you want. I also suggest considering to get the mobile version since this was originally developed for mobile and is, well, cheaper. Just know that you’ll have to pay more for the night levels if you get the mobile version (though I suppose it won’t be a problem if you never intended to anyway).