Watch out everybody! Shooting straight out of the blue, or perhaps more aptly put, surging forth from the depth of the underground, this Unexpected DLC takes us back into the frolicking and fighting of the third Dungeon.

Oddly enough, I had not played Dungeons 3 before getting this DLC. I had played the previous two Dungeons games, though, so I kind of figured this would be easy. I thought I would just be able to jump right into the fray and do the DLC on its own before going back and playing the base game. That hubris was definitely not well-placed. I ended up spending quite a bit of time with the base game relearning the ropes because it was a bit of system shock being dropped right into the heart of battles. If you have played your way through all the base game and the DLCs thus far, odds are you will be in better shape than I was and won’t be quite so thoroughly humiliated early on. Once I felt more comfortable, I dove into this DLC, no longer expecting to be trounced quite so thoroughly. Simply put, I was in for a surprise.

Dungeons 3 – An Unexpected DLC isn’t an easy DLC, at least not starting out. Despite starting out with a rather decently equipped dungeon and some creatures to help you out, you are not given much time to prepare yourself. Almost immediately after starting the first of the three new fully voiced story missions, I found myself having to deal with both the standard dungeon entrance defense as well as having to fend off the heroes who have set up their own bases in my underground lair. This meant I had enemies coming from multiple directions at once which made it a touch harder to build effective static defenses. Once I started getting a bit starved for resources that could only be found on the surface, I ventured out with my fledgling band of anti-heroes. The result of that risky move was that I was quickly attacked by vines and pesky heroes. After managing to capture one resource node at night (night is when the heroes are less likely to attack my dungeon during my absence), I then found myself trapped in my dungeon unable to progress on the surface world without being badly bloodied by those bothersome vines. Ultimately, despite my best efforts, I was overwhelmed and defeated. To my dismay upon retrying, I ended up right back in the same situation. Eventually I managed to capture a second node and at the point I was at last able to start building my strength properly. After barely scraping by the remaining two chapters, I was finally ready to start licking the bleeding wounds to my pride, and begin working on this review. 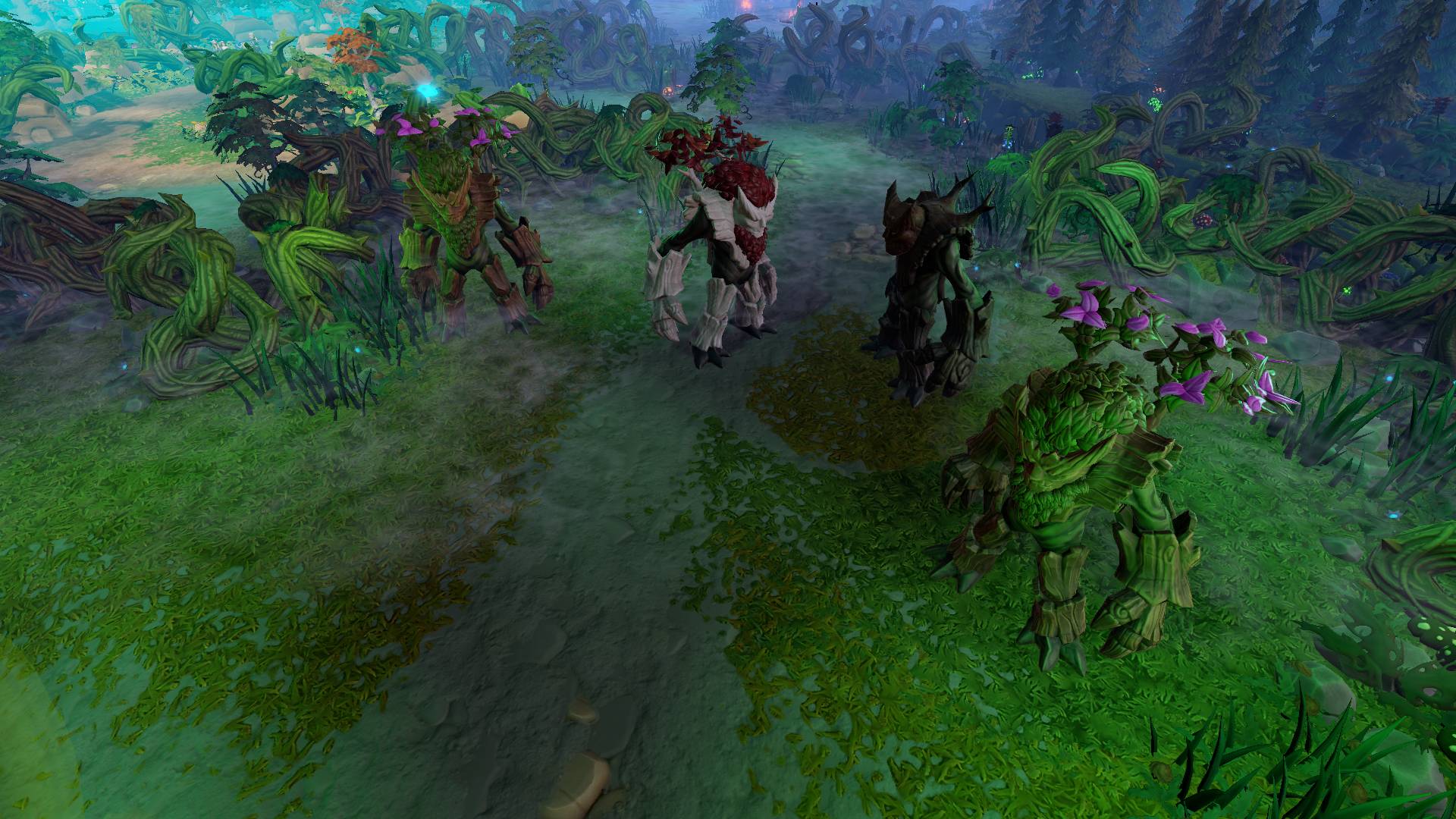 Three new fully voiced missions, a new enemy and a new creep type doesn’t sound like much new content for Dungeons 3. On the surface perhaps it isn’t, however, it will take you quite a while to complete the new addition simply because of how challenging it actually is. I’m sure if you are an expert with the Dungeons series or similar games you will likely have an easier time of it, but if you are rusty like myself, or fairly new to this type of game, it may take you a surprisingly long time to beat the DLC. 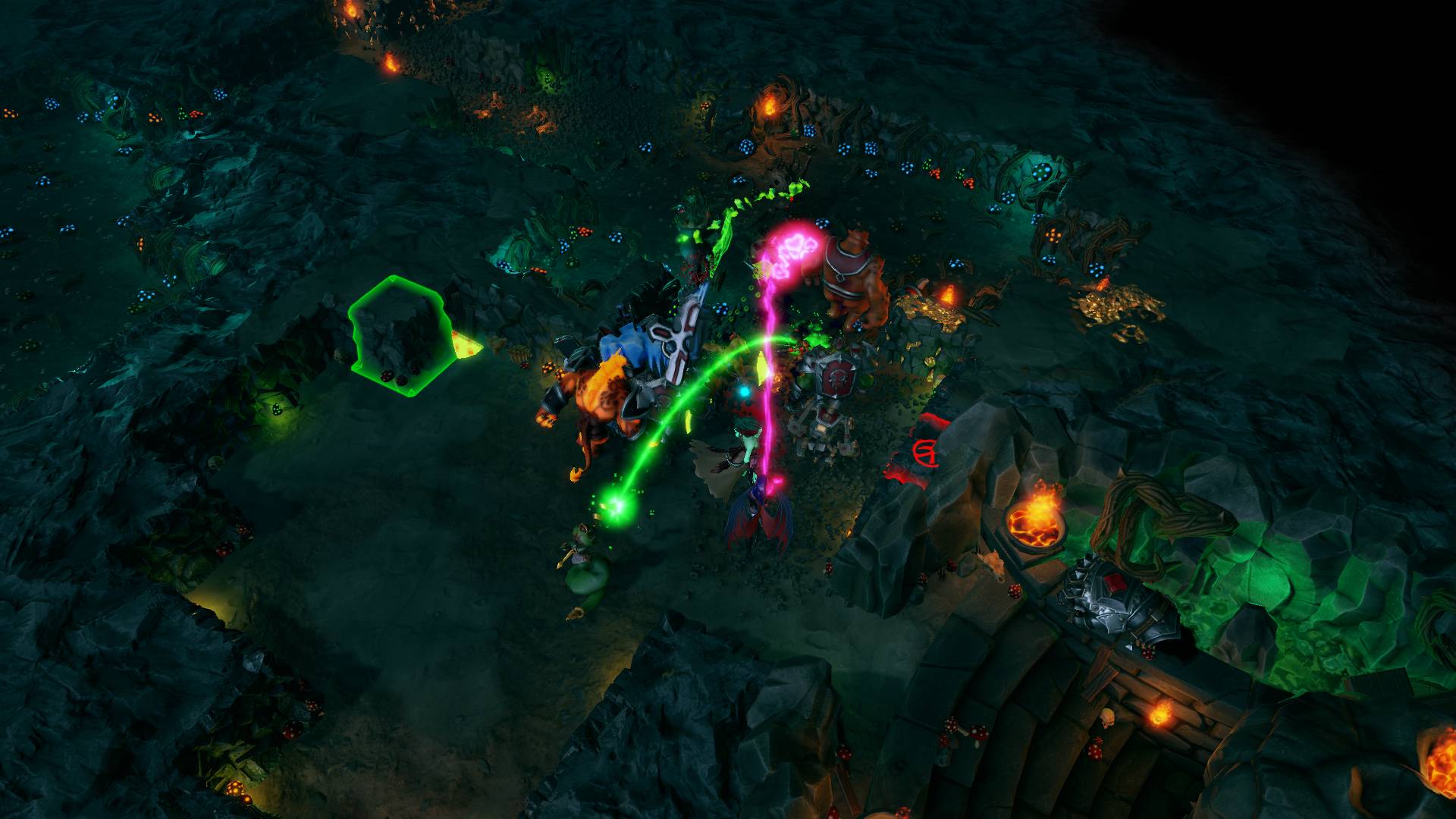 Taking a step back, the Dungeons series uses humour to aid in the enjoyment of the game. It doesn’t take itself seriously and occasionally breaks the fourth wall to make comments or jabs against video games in general, including itself. The announcer doesn’t want to do his job anymore and is quite vocal about it once you first launch the new DLC, but he is there for the long haul and is quite enjoyable to hear. The heroine of the game has become far more pure evil in this DLC than she was back at the start of her journey into evilness. Between the announcer, the heroine and the new enemy, you are in for a fun extension to the Dungeon 3 story. 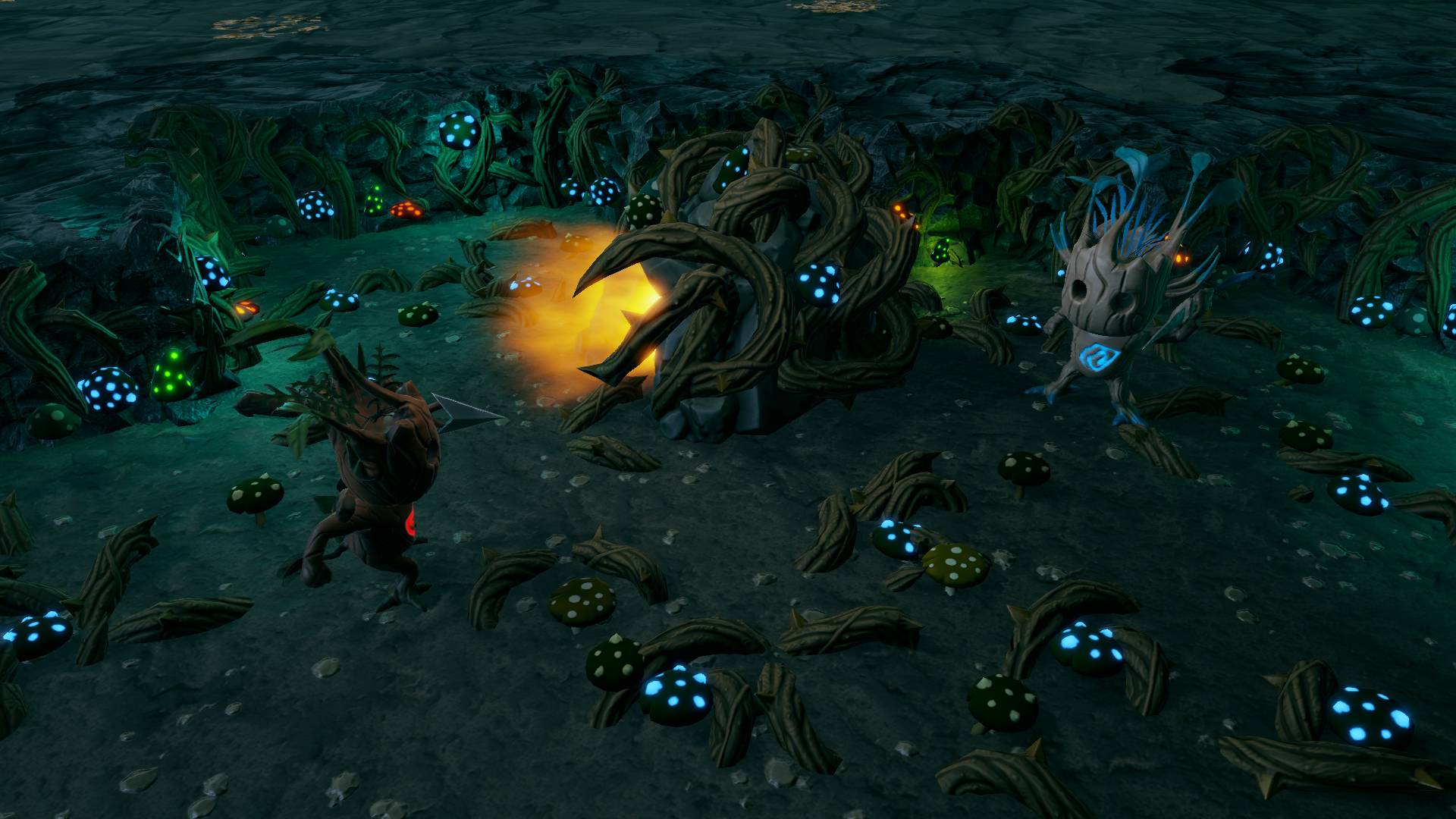 Graphically the DLC doesn’t change the graphics of the game at all, and it continues to look good even on systems that are a bit older now. There is enough going on visually to keep it interesting, but not so much that it is overwhelming. You are easily able to differentiate tile types when you are searching through your Dungeon for much needed resources or for specific dungeon rooms you are looking to access. The surface world is starkly contrasting in appearance to that of the underworld. While the underground is dark and a little dank and lifeless looking, the surface looks very much alive (at least until you are done with it.) The enemy hero types (and your own units for that matter) can easily be visually differentiated so you can tell exactly who is who and strategically target the most annoying of the heroes first. 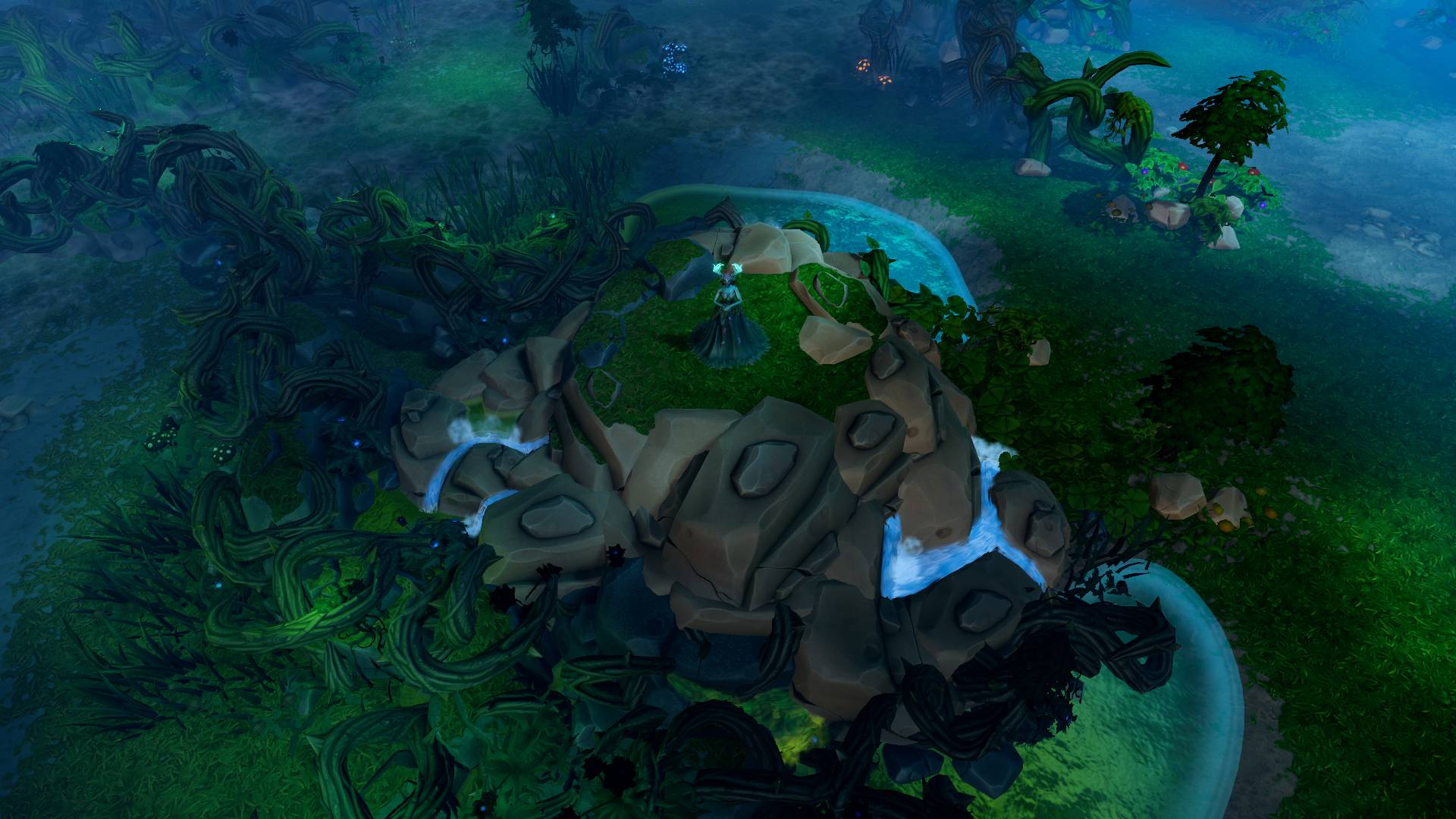 The user interface is very easy to use and helps you effortlessly perform whatever actions you wish to take. Being able to make a control group and then either grab them all up in your evil and hand throw them where you want them to be, or being able to micromanage your surface units in order to maximize their longevity and damage is really well done in this game. The menus are easy to navigate when you need them which aids in your ability to develop your dungeon effectively. If you feel confident, you can even walk away from the game for a while, and other than some of the AI’s own prioritization issues, the game will run smoothly in your absence. The only real issue I had was when I had a decent number of combat units in my dungeon, while my heroine and a small entourage were out trying to capture resource points, the enemy attacked me. I saw the warning that my dungeon heart was under attack but I knew I had passive defenses and a small army wandering the halls. I figured not to worry, everything was under control and it would be fine. I mean the last few times my dungeon’s heart was under attack I didn’t even need to lift a finger to give direction. Without another worrisome thought, I proceeded to forcefully chop my way through the troublesome blood-thirsty vines to capture a much-needed resource node. Unfortunately I was definitely wrong in my inaction. Not sure if my army didn’t bother to engage (since I wasn’t there to smack them into working) or if the enemy had simply launched a massive attack and overwhelmed them. By the time I captured my node and opted to send my bloodied troops limping back to the base I realized something was actually seriously wrong this time. Moments before my heart was destroyed, my heroine made it back to the dungeon and rallied the troops but it was too little too late. Most of my standing army was randomly wandering around doing odd jobs or just having a nice snack rather than saving their Queen’s power source. My last save was almost 30 minutes earlier, and even after retrying from that point I still got my heart shattered. I ended up restarting and reformulating my base (in a kind of inefficient way) to ensure that the enemies were shredded more by my passive defenses before they are cleaned up by my army. All in all, it was a long, hard fought journey from the first to the last chapter of this DLC. Upon finally beating the DLC it was with a long sigh of relief and a feeling of genuine accomplishment rather than the typical disappointment that it was over. 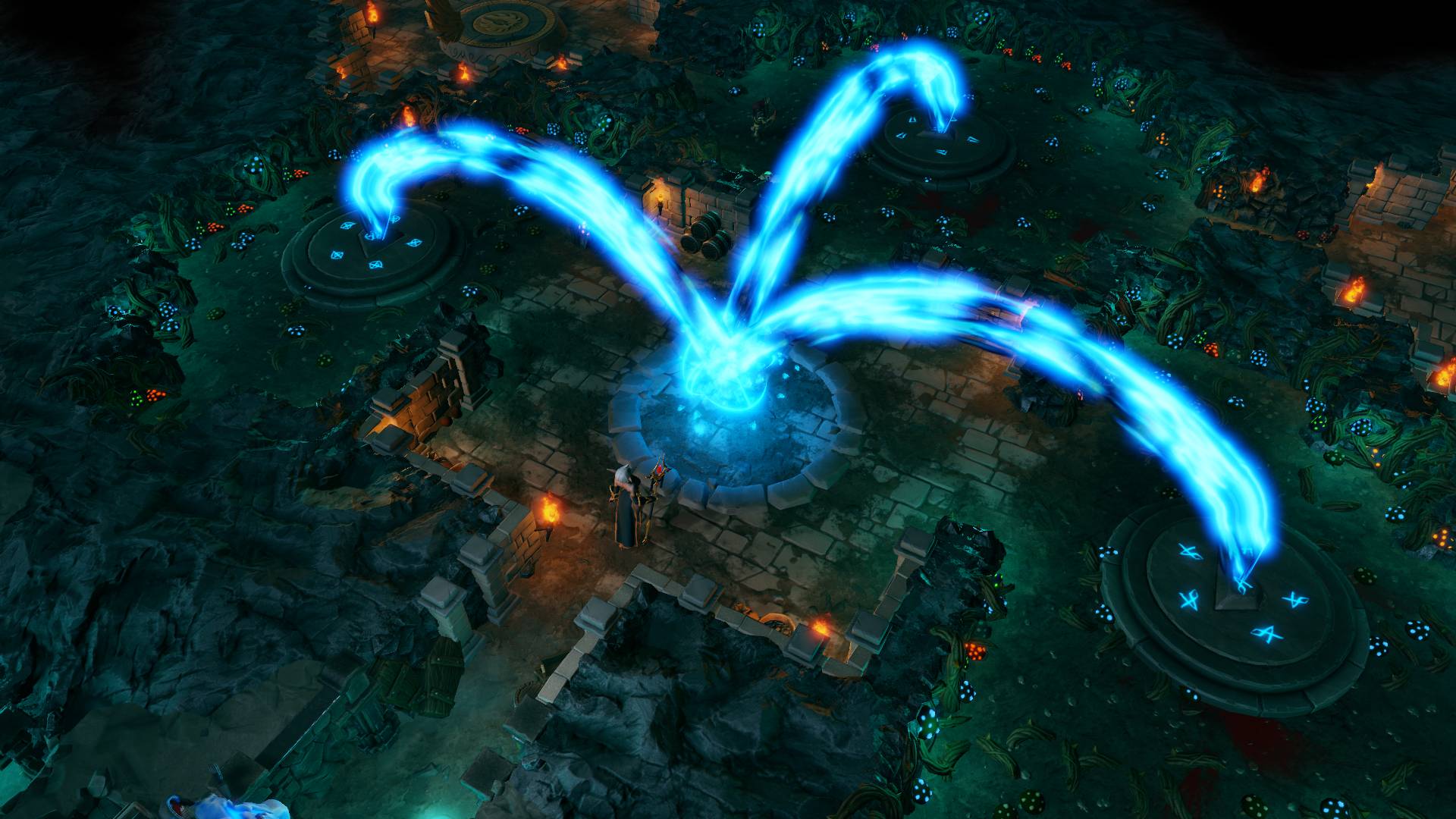 So, should you get this DLC? There aren’t really any new dungeon elements to talk about for this DLC as it basically just uses the currently existing dungeon elements other than a new creep type. That isn’t really a detractor because there are already sufficient dungeon and creature types for you to use that adding any more likely would not really enhance the game that much. It’s certainly still worth getting if you have enjoyed the game thus far. I would definitely pick this DLC up if you are itching to head back into the dungeons once again. It will unquestionably add some considerable adventure and entertainment to help shorten the wait for the announcement and release of Dungeons 4.