This is not another Earthbound gem obsessed with the past. Between a few unique twists, there is a rich narrative for fans and their children to cherish in the Wild West.

Earthbound is a game with a legacy that has enriched ‘90s kids and inspired classics such as Undertale, LISA: The Painful RPG and Citizens of the Earth as well as Pony Island and OneShot. While these games may appear unrelated, the idea of subversion, of gameplay and of storytelling, combined with deadpan comedy of modern RPG tropes has always made these titles special to make up for their simplicity. Along with different themes, tones and comedy, each interpretation never feels like a copy; instead, each game feels like a game based around what aspects resonated with each creator who had played Earthbound.

Boot Hill Bounties is another Earthbound-inspired title that challenges what you might expect by taking a more straight-faced approach. As someone who had not heard of the original, it was not confusing to start with the sequel, yet the gameplay is largely the same except with more time with a full-party. Gameplay largely borrows from Chrono Trigger’s turn-based combat with its own ideas on how to make standard JRPG battles more diverse. Linearity is replaced with branching paths; and instead of a story relying on spectacle and lore, there is a surprising richness behind every character, friend or foe, involving a pulpy adventure in a loosely historically accurate Wild West. While Boot Hill Bounties may not be revolutionary, it is a game that will leave you with fond memories as it rides off into the sunset.

The Good, the Bad & the Meh

Saying that the gameplay is largely uninspired would be unfair, but it’s easy to see why when you compare it to Undertale’s non-combat system and LISA’s status-heavy combat. The gameplay borrows various elements from Chrono Trigger’s battle-system; Earthbound’s pre-battle, status-effects and anti-grinding elements; and Harvest Moon’s progression system for skills like farming. On top of these features, Boot Hill Bounties also creates its own unique battles that feel more like puzzles such as a sniper shootout with destructible cover or a security door that must be disarmed in a fight. Moments like these, though sparse and sometimes frustrating, are the best gameplay elements Boot Hill Bounties has to offer.

The problem with the rest of the core gameplay is how simple it is. Combat doesn’t suffer as much because you can always ramp up the challenge by switching to Hard mode where tactics are a requirement. Synergy between companions’ skills (Vantages) makes up the other core aspect of the gameplay where party members rely on buffs, status effects, etc. to get through as a team. Every encounter, even if it’s standard JRPG combat, always feels impactful as different hats reward players with new strategies to accumulate on top of leveling up. These progression systems benefit the game because it rewards variety. 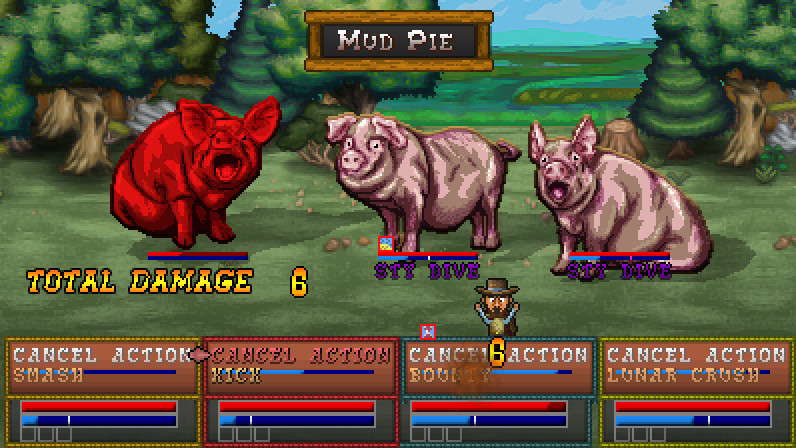 Outside of combat, however, is where the gameplay’s shallowness begins to show. Map design and side-quests are actually the highlights as every area offers activities to break up combat like riddles or mini-games such as a food contest. However, skills (farming, weapon buffing, cooking, etc.) are simply meters increasing the number of options to do the same thing. Guessing with reagents to find weapon-buff combinations is more often a crapshoot unless you know the recipes from NPCs. Doctoring is simply a stat-removal skill to sap away money unless you invest into it at campfires. Lastly, if you were expecting Boot Hill Bounties to be a JRPG mixed with Stardew Valley/Harvest Moon, then farming will disappoint you the most; it’s simply farming for extra resources to sell. Items also seem oddly placed where you may get the best gear early on, making money a commodity with no usage except for increasing these progression ranks.

None of these elements ruins the gameplay, but they feel like features simply there for the sake of variety without thinking of how to best integrate them. At worst, it can showcase a lack of extra polish that could have improved sections like Little Creed’s apparatus, yet none of these features are mandatory. (The game itself is highly polished with relatively few technical issues, which all have been addressed.) It seems odd to add extra things when the game is not lacking on content; it took me twenty-one hours to complete 66% of the game. The rest of the content was completionist rewards for an end-game reward, which you can complete post-game, but there was also a fair number of side-quests incomplete. The only reason these extra features bother me is that it takes away from the real star of Boot Hill Bounties, the storytelling. 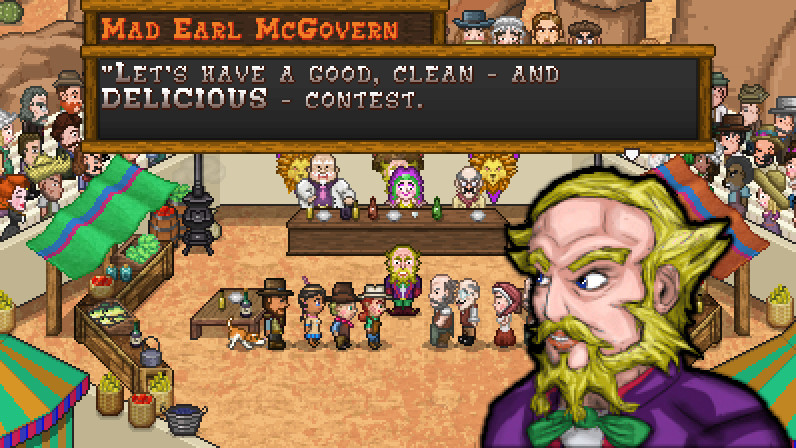 Once Upon a Time in the West

Storytelling has never been a large focus in Earthbound-inspired games much like the original. The comedy, the weirdness of its spectacles, and in some games like LISA and Undertale, the lore, have all supplemented what threadbare narratives they have had. (The one exception being Mother 3.) None of these statements are to say games with lore have bad stories; it’s simply a different way to tell them. In contrast to other titles, Boot Hill Bounties has not only the pulpiest of stories inspired by Spaghetti Westerns but it also has the strongest sense of storytelling because of its emphasis on plot.

This effect is largely the result of how much Boot Hill Bounties emphasizes character development for every main character as vignettes behind every branching path. To tie everything together, the set-up is simple: Hunt down the remaining members of a gang during an impending war between the Indians and the Settlers. Similar to games like Shadowrun Dragonfall, the plot begins on a set-path before allowing players to choose different junctions to focus on both the protagonists and the antagonists. (Choices, however, seem superficial as they don’t appear to impact the outcome.) Each path tells its own story to completion, which allows all of them to have a nice sense of pace and purpose. Not only does this approach ties the plot together with relevant details but it also give motives behind the antagonists that flesh them out to be real characters than simple bad guys. This is Boot Hill Bounties’ greatest strength, characters. 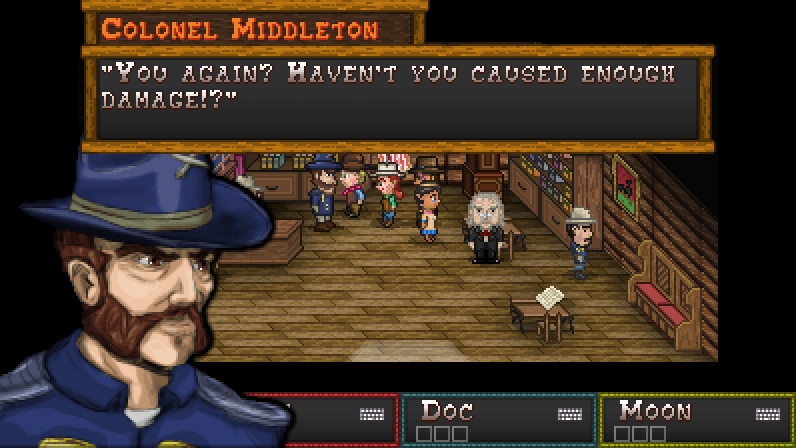 Fans of Mother 3 will truly enjoy this game because of how character-driven it is. The adultness of the world is handled surprisingly well with the kiddie visuals and perspectives as the game explores themes of war, racism, violence, religious institutions, and other matters that fit the Western times. It always borders the line of tasteful portrayals mixed in with creative fictions like the Mexican nationalists waging a war in the U.S. and Mexico because they are abandoned, “We are men without country, unbound by laws or customs.” These result in some well-executed gut punches later on that truly surprise you because the narrative builds up to them striking at the right moment. Even without playing the original, the sense of growth of every character feels like a complete story-arc, only suffering from the fact that the game goes out with a taste of what’s to come as its final act. 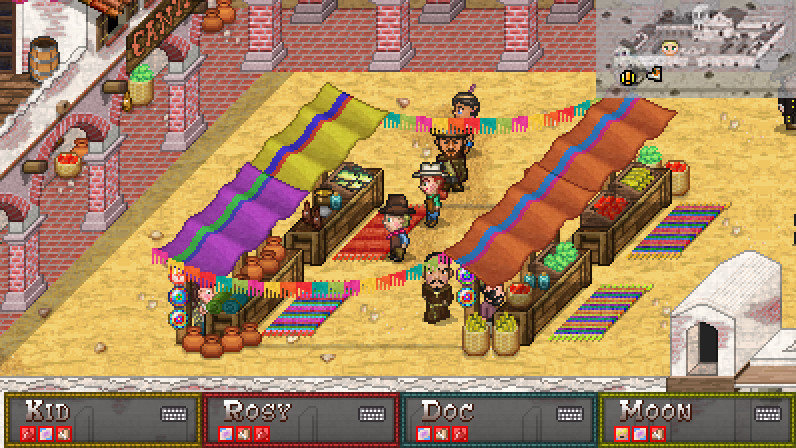 Verdict: The (Not So) Last Cowboy Song

Unlike the original, which was marred by the fact that the game ended as soon as you rounded the whole posse, the sequel does a better job ending to set-up the third game. Some may not like cliffhangers, but if a game can resolve its plot to let another game take up the reigns, then the role of that story fulfilled its purpose. Boot Hill Bounties manages to end at the right time, though it may feel anticlimactic depending on what order you took as it doesn’t have a final boss or an ultimate challenge. That is obviously the purpose of the third game, but it is a hard truth when it may take years to see it. 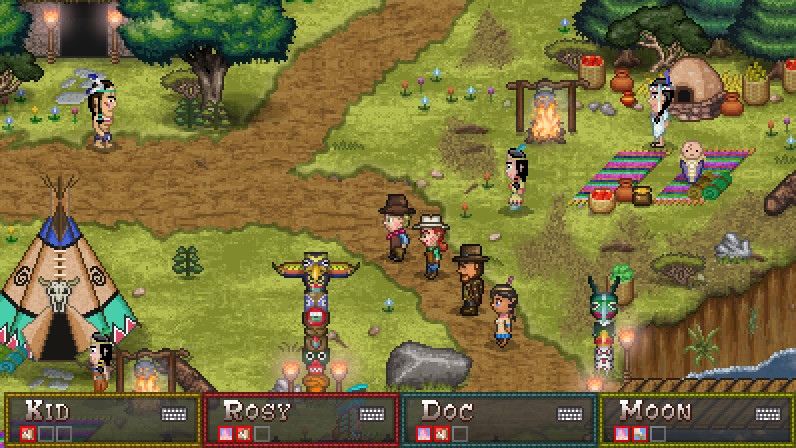 The people that I believe will truly appreciate Boot Hill Bounties are not only fans of Earthbound but also their families. While some aspects may be questionable for younger audiences, the fact you can play this game with others lets the legend live on beyond the hearts of Earthbound fans such as their children who can share that memory with the same passion.