Sunless Skies is the long-awaited follow-up (not really a sequel) to Sunless Sea, the game of exploration and storytelling from Failbetter Games, makers of the Fallen London browser game.

Failbetter’s games are set in a sort of weird-fantasy, gothic-horror, steampunk alternate history world in which London was carried away by bats to an underground world called the Neath. The Neath is full of things both wonderful and horrible (mostly the latter), and is truly unique; its weirdness factor is right up there with a China Mieville story!

Sunless Skies is set in the same world again, but in the future. The empress of London has led her people to the Heavens, leaving the Neath and most of its inhabitants far below. Like Sunless Sea before it, this is a game of exploration and storytelling, but where Sunless Sea had Fallen London’s hundreds of thousands (millions?) of words upon which to build, Sunless Skies attempts to strike out much further on its own.

Sunless Skies is played from a top-down view and the graphics are strikingly beautiful. The heavens are divided into a number of different realms, reachable via special interdimensional (?) gates. Each realm is further divided into a number of areas, each with a distinct look. The graphics for the starting area, the Reach, for example, change from cold, mountainous looking wastes to lush green fertile areas, to industrial-looking complexes around the major settlements, and more.

The realms are like great oceans of air, with islands floating among them. The parallax-style backgrounds show multiple layers beneath and, at times, above your locomotive — yes, you’re piloting a sort of flying train, complete with clouds of steam and chugging engine sounds — and these change with the different areas, too, as well as with lighting, weather effects, and the like. The floating text when encountering points of interest is simple, but looks excellent. The game looks far more impressive than its predecessor. 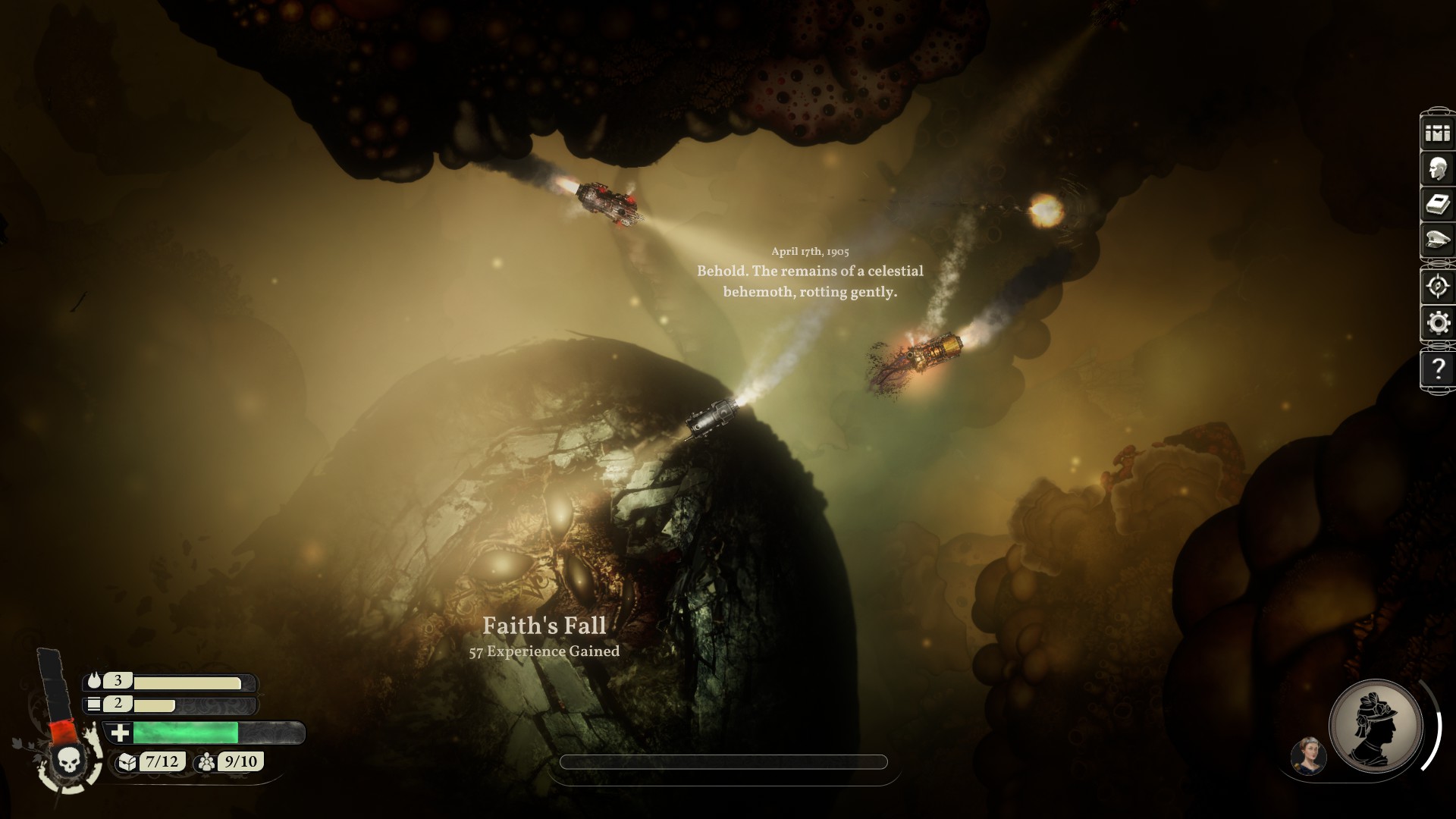 The interface, too, has had a major overhaul, and while it looks big and bright and lovely, it’s simply not as usable as it used to be. On a 1920×1080 screen the smallest font is still much too large, requiring repeated scrolling. It’s also harder to find information than it should be; I couldn’t find my current “A Port Avon Welcome” anywhere, for example. The UI was also rather buggy in the version I played, with mouse scrolling and scrollbars sometimes not working properly, windows opening up partly off screen, and icons occasionally getting ‘stuck’ over the game screen, and some issues with map markers disappearing. 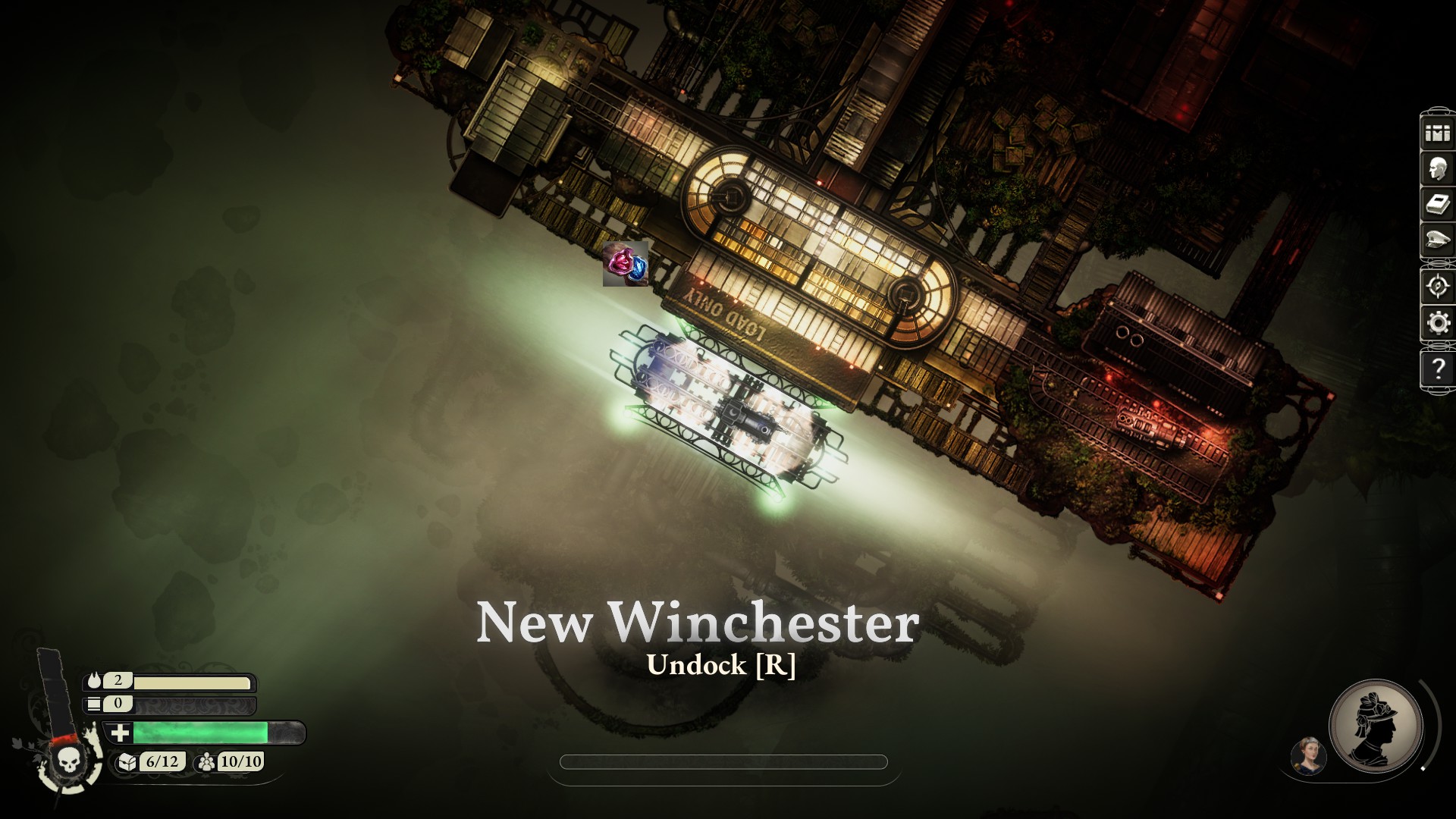 The pre-release version I played apparently does not have the final audio, but what is here is excellent already. Beefy locomotive, gun, and explosion sounds are spot on, and the occasional haunting music tracks are wonderful, setting the scene well. There are no voices, but I didn’t expect any.

I experienced some stuttering on my GTX1070-based laptop, but pre-release notes stated that performance and optimisation are a focus before release. 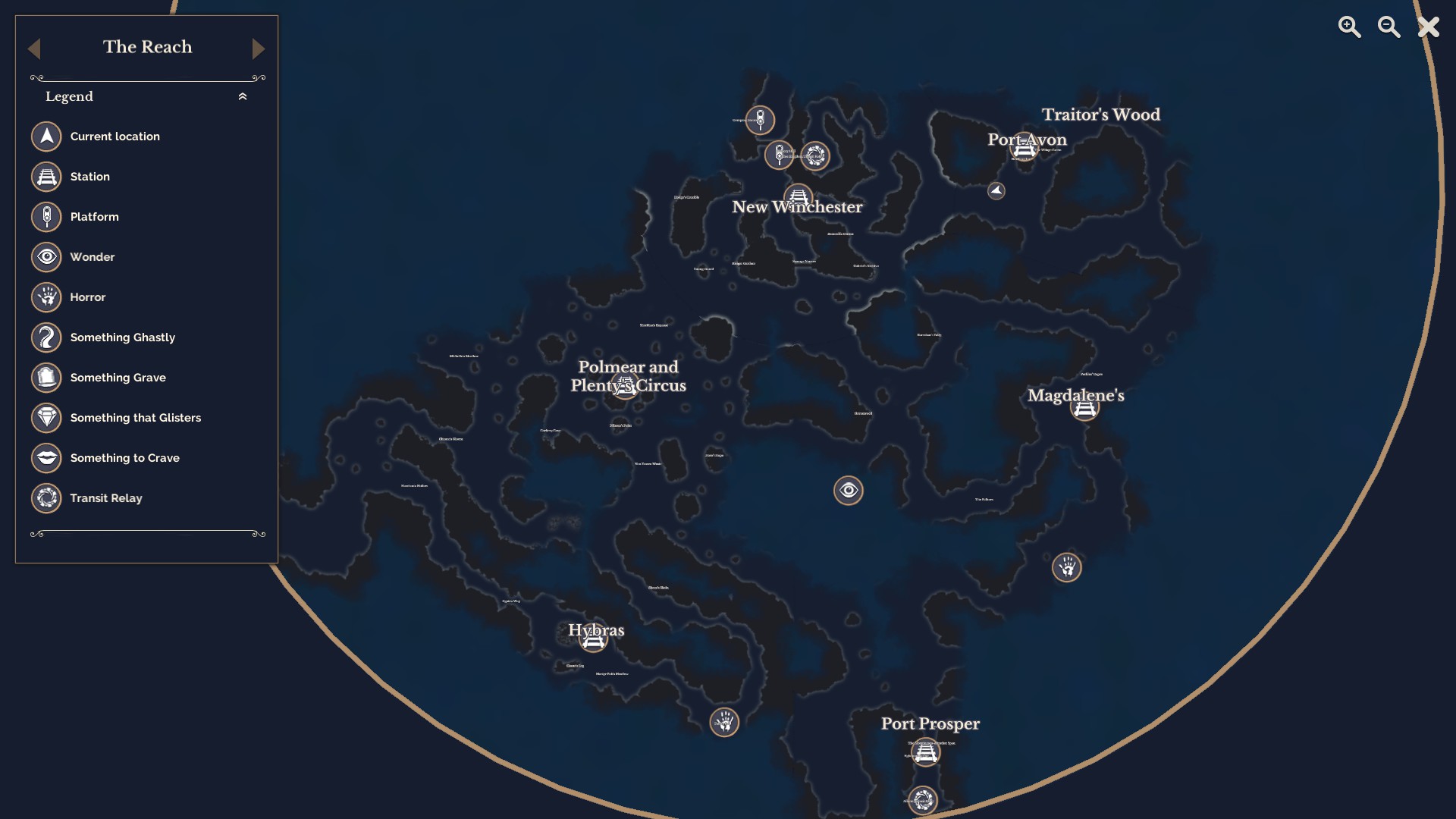 Play alternates between exploration of the realms of the Heavens, which is top-down and in real time, and story-telling, quests, and other UI-based game interactions, which are performed with the game clock paused. During the real-time segments you control your locomotive directly with the WASD keys (or the controller, though this was recommended against in the pre-release version), directing it and the overhead camera about as you gradually reveal the fog of war that covers each realm at the start of the game, and finding settlements, wrecks, horrors, and other points of interest. In these segments your fuel and supplies constantly reduce, and your horror gauge typically increases.

Combat works differently to Sunless Sea, with forward-facing weapons now being the norm and a link between weapon heat and the ability to strafe your locomotive out of harm’s way. It works quite well, with multi-opponent battles in particular being rather challenging, but ultimately I found it about as enjoyable as Sunless Sea’s combat. It’s different, but not really better. 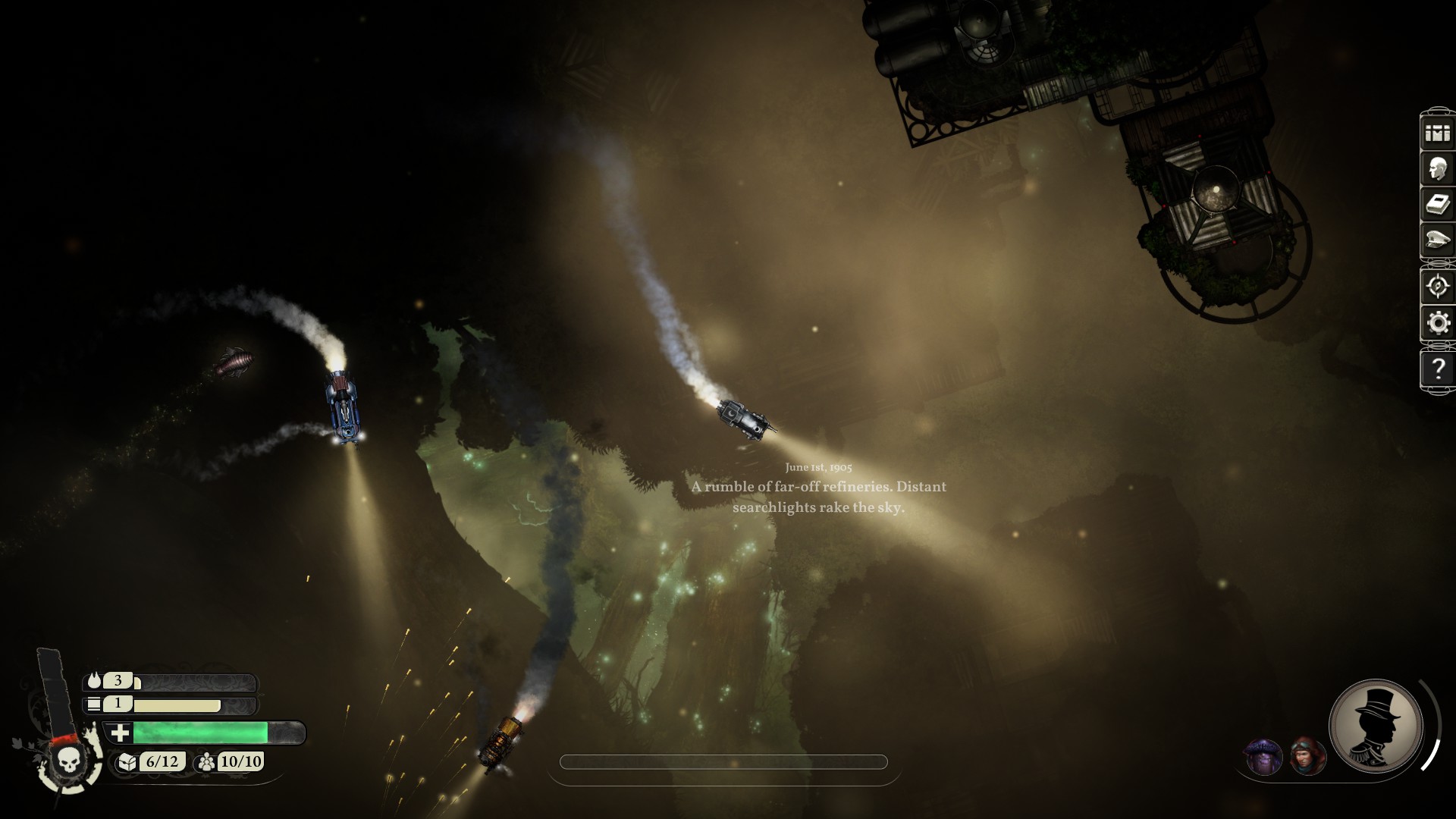 Interacting with a point of interest freezes time and allows you to explore the location at your leisure, through Fallen-London-style “storylets”: static text, icons, and other little art snippets. Trading; quests; locomotive, officer, and inventory management; and everything not directly related to moving about the world happens in this mode, with much of it being luck based: roll a virtual die and pray for a good result. This formula is largely unchanged from Sunless Sea, though there are a few little changes here and there. 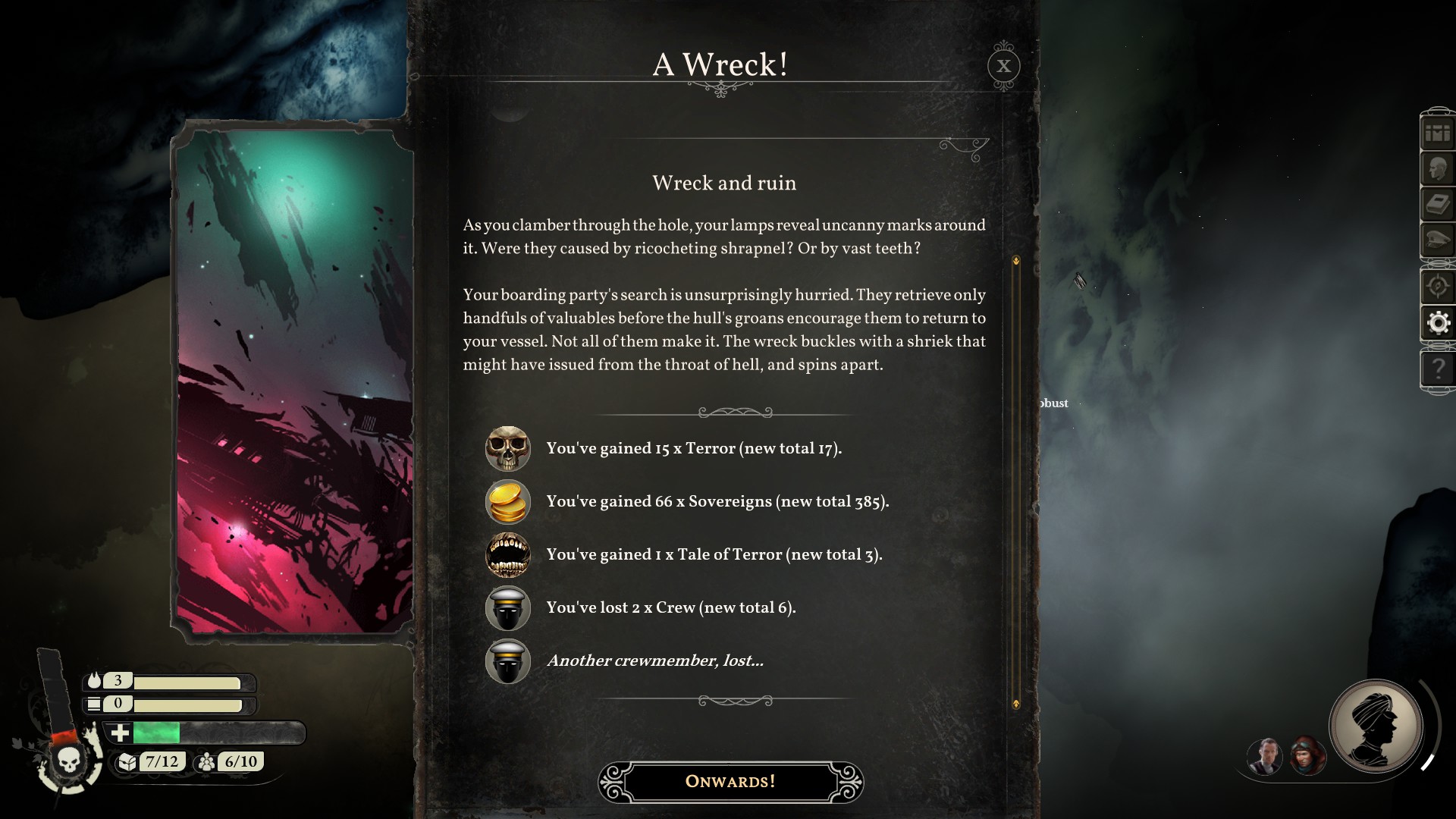 Rogue-like elements, such as perma-death and procedural generation, have been carried over to Sunless Skies, as well as the meta-progression elements, such as inheritance. But they don’t seem quite as well integrated here. A couple of unlucky games will actually make you weaker from play to play, as exploration experience points are only awarded to the first captain discovering a location, so I’d actually recommend starting from scratch most games, unless you happen to get a great inheritance. Regardless, you’ll inevitably spend hour after hour covering basically the same stretches of the Heavens, even if they happen to be laid out a bit differently from one game to the next.

The storytelling in Sunless Skies doesn’t reach the same lofty heights as Failbetter’s other games. I’d expected tales of the Heavens to be awe-inspiring and imaginative, but instead they often fall flat and are too thinly sprinkled about the near-empty world. The writing quality is poorer than I expect from Failbetter, too: “… you will be a wiser person then the previous captain started out as.” (sic) Yuck! 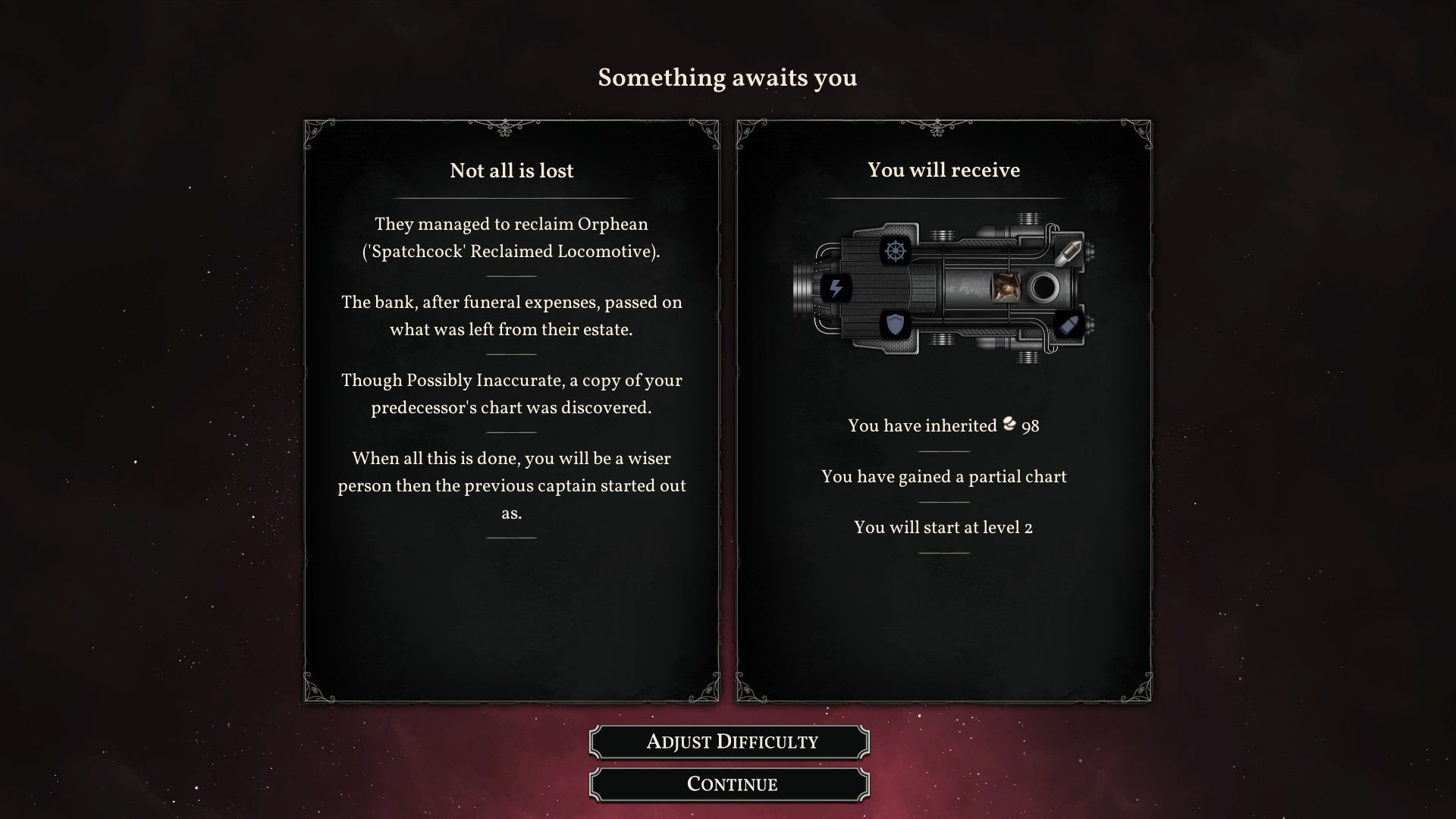 Couple the not-quite-Failbetter-quality writing with the hours inevitably spent backtracking the beautiful, but ultimately empty trails, and the whole experience becomes less engaging than either Sunless Sea or Fallen London. There are a number of outstanding issues and missed opportunities, too, including poor AI, limited motion controls (full steam ahead?), some scripting / plot bugs, limited level advancement and mission variation, limited map functionality, and so on.

I loved Fallen London. The world was so well realised; the writing weird, but sublime; and the interface simple, but exactly what was needed. Sunless Sea built on this and made an enjoyable game of horror and exploration, with rogue-like elements woven throughout with finesse. Though Sunless Skies tries, ultimately it fails to reach the same heights as its predecessors.

The game looks and sounds beautiful, and mostly it is moderately enjoyable, but it feels so much more repetitive than its parents ever did, and the writing is simply not as good. The world feels hollow and empty; the rogue-like elements don’t quite fit; the interface is confusing and doesn’t work properly; and almost everything familiar from the Neath is gone, replaced with a less-well-realised world. Try as I might, I just don’t feel the same sense of wonder when I play Sunless Skies.

If it were now entering Early Access I would be optimistic about what the game might become. Given that it’s leaving Early Access and is nominally “finished”, it feels like a missed opportunity. It’s not a bad game, but it is a long way from what it could have been.