At long last, the metroidvania that is all about fish controlled robots, Feudal Alloy, is finally here, but was it worth the wait?

It seems that for the past couple of years it has been a good time to get into or be a fan of metroidvanias, with numerous titles having been released. Some of them were extraordinary, some were good, and some just missed the chance to put themselves in the map. So, when I first saw Feudal Alloy a year or so ago, I got excited as I wondered which category it would fit into. Nonetheless, months went by and, without any news from the developers, I quickly forgot about the game, that is until a week or so ago when I finally got the chance to play it. So, what is it that this game made by a two person team has to show everyone? 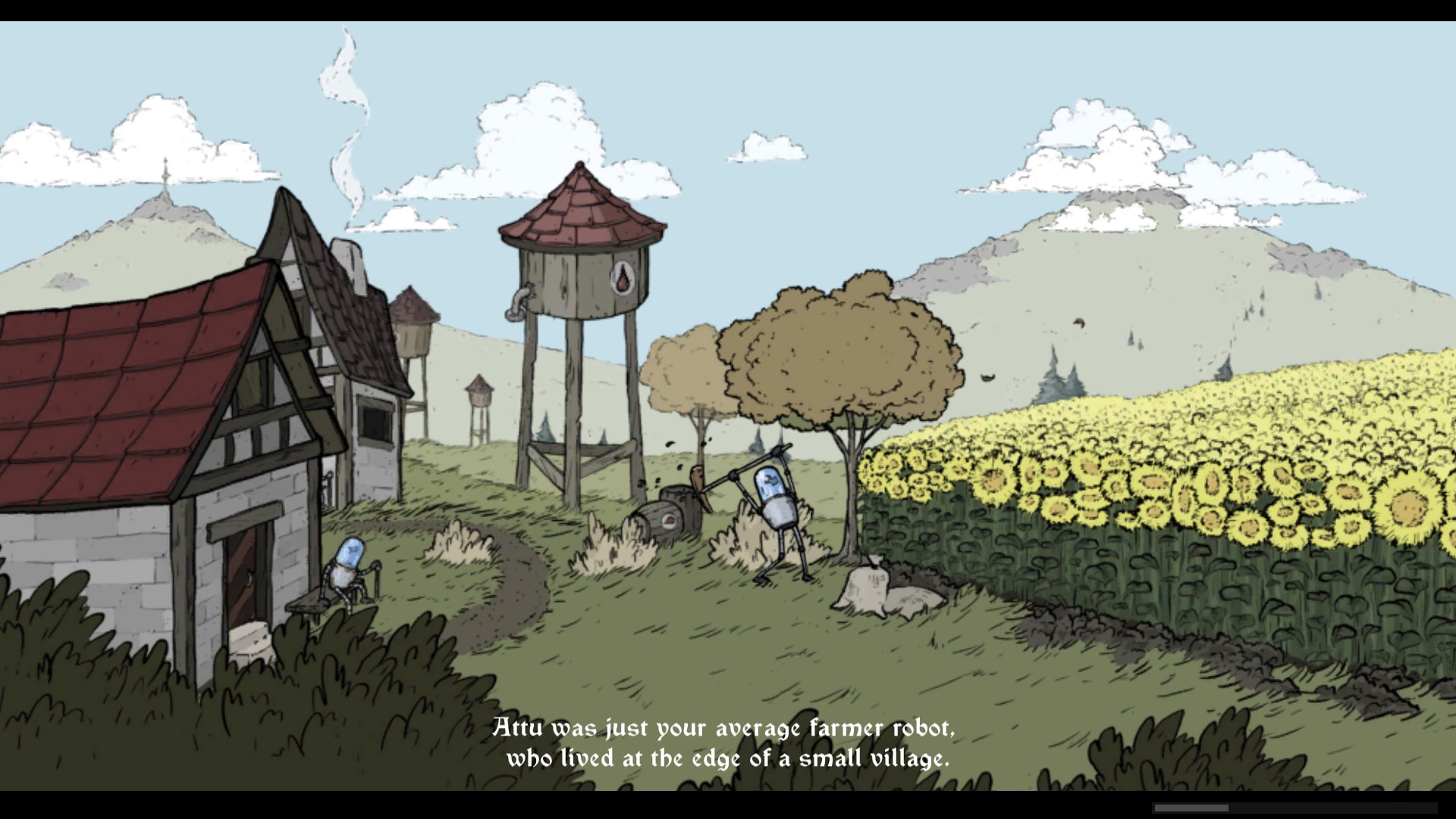 Well, first and foremost, if there’s one thing that is immediately obvious is that the game has lots of charm. The game takes place in a world inhabited by fish controlled robots, which rest nicely inside a fishbowl somewhere in the robot’s hull that they command. It’s certainly a silly setting, but in a good way. You play as Attu, one such robot who helps old robots and cultivates the oilseeds that are needed in order to oil the robots from your village. That is, until the day when the village is suddenly attacked by bandits and you decide to take revenge into your own hands.

The game adapts traditional elements present in the genre to its own world perfectly, making it so that mundane mechanics which we’re all used to feel completely natural and in tune with the setting in which the game takes place. For instance, instead of health you have oil, which you can consume bottles of in order to regain your health. In the same sense, and given the fact that you’re a robot, the game features an overheating mechanic, one that requires you to cool yourself down by either not performing any action (other than moving or jumping) or by consuming cooling liquid whenever you’re exposed to huge amounts of heat or when you spam your attack, which actually prevents you from functioning normally (e.g. you can’t attack until you cool down). 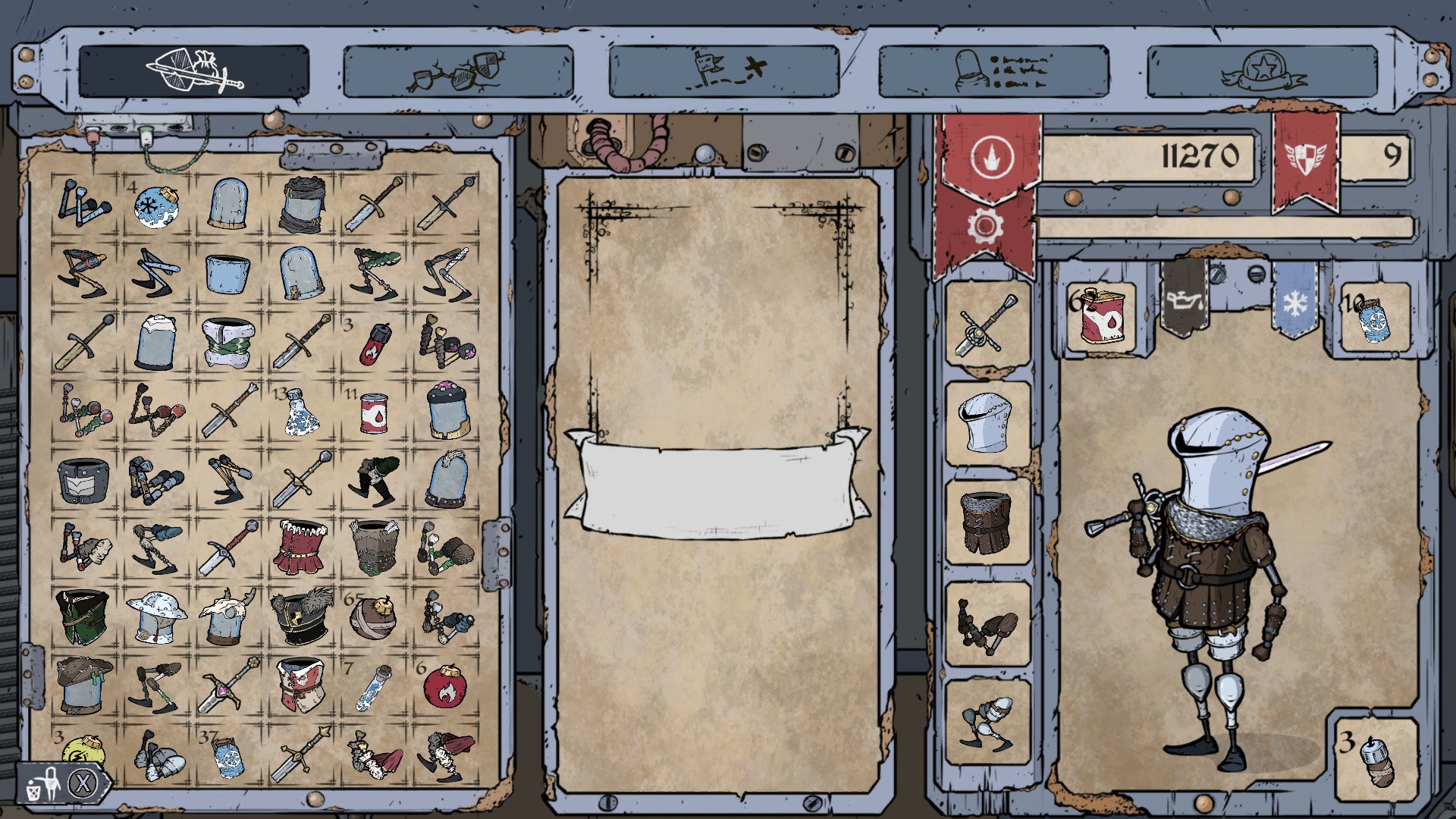 During the scenario described above, you can see that the attention to detail is spot on. Whenever you’re low on oil (health ), you can see cracks on your hull and oil dripping from it, and when you’re overheating you can see sparks and steam emanating from inside you. Also, whenever you take a hit, the screen flashes with this image of cracking glass, which imitates the enemy hitting your fishbowl head. I think there’s no denying that a lot of care and love was put into the game’s visuals and design. With that said, while the animations are decently smooth, and the graphics and the art style are quite lovely, the levels reuse the same assets quite a lot. Sure, there are a few different areas in the game, each with their own theme, but overall they just use the same art assets throughout the entire area. I wished there was more variety in the scenery.

On the other hand, as a game on its own, Feudal Alloy seems to have not deviated from the usual tropes and the model that metroidvanias tend to follow. The world is composed by a series of interconnected rooms, optional side areas that you can and should explore, as these often contain chests with equipment or consumables that will make your life easier in one way or another. Each of the world’s areas are also not immediately revealed, as you must first find scrolls which will unveil the region you’re in. 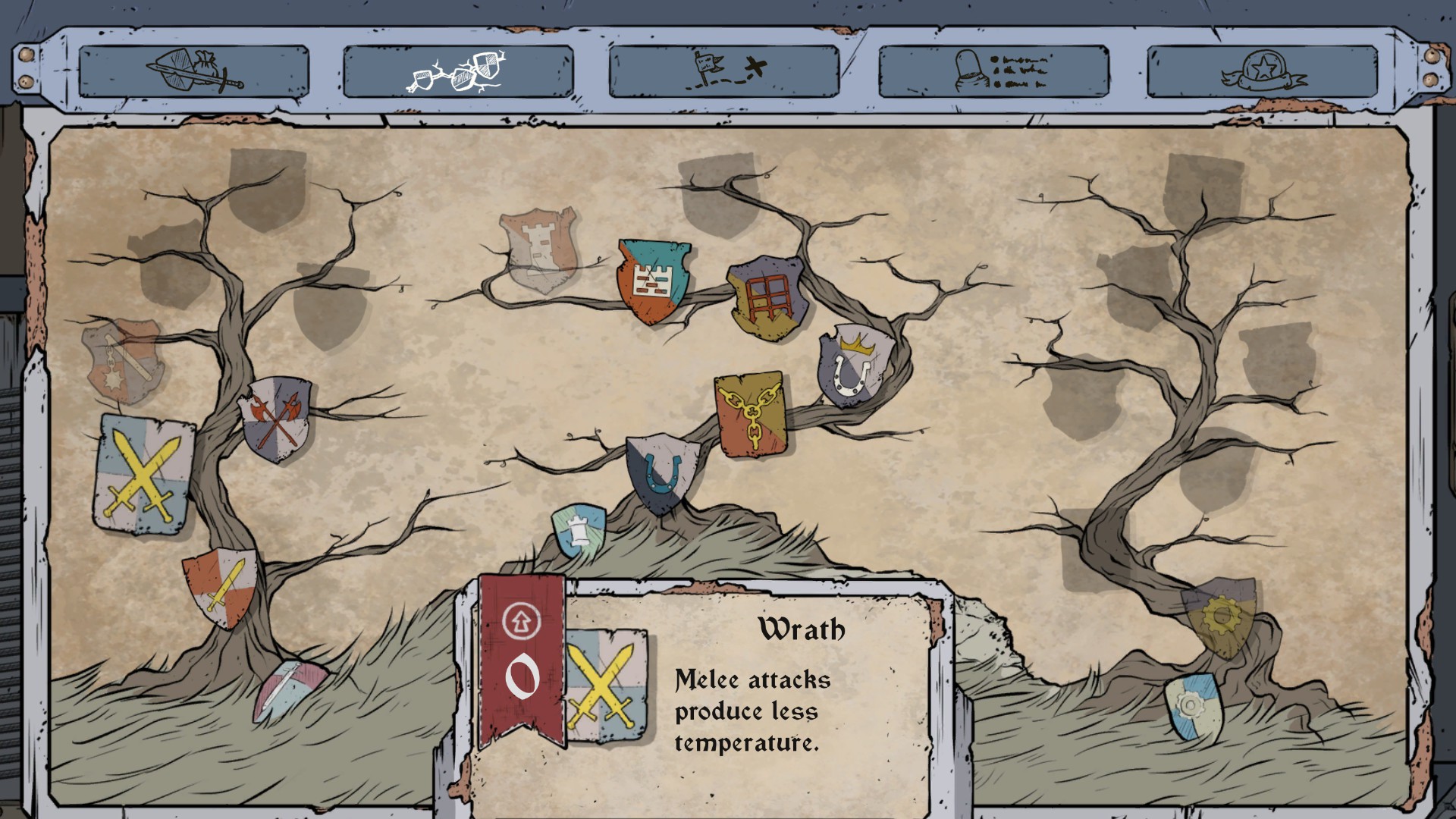 Like any metroidvania, exploration is a big part of Feudal Alloy, as a lot of areas are either barred by an obstacle that you must first acquire the means to deal with, or by these doors which require specific cartridges in order to open. Scattered through the game, you will find abilities that will allow you to access previously inaccessible areas, like dash, double jump, and a series of offensive electrical abilities, as well as numerous pieces of gear that you can equip.

There are tons of chests hidden in secret places, or just sitting there in plain sight, which contain all sorts of things that you can equip. Being a robot yourself, you can change your arms, legs, torso, head, and obviously your weapon, which sadly there’s only one type of, with that being swords. There are also a few merchants where you can buy molotovs, oil, cooling liquid, weapons, and robot parts. Each individual piece of these last two can change your stats in different ways, and the game does allow you to choose which kind of build you want to have. Things like damage, armor, overheating tolerance, and cooling speed are just a few examples of how you can change yourself. On another note, equipment changes also alters the way you look, which is quite cool to see, especially since you can change parts and equipment on the fly. 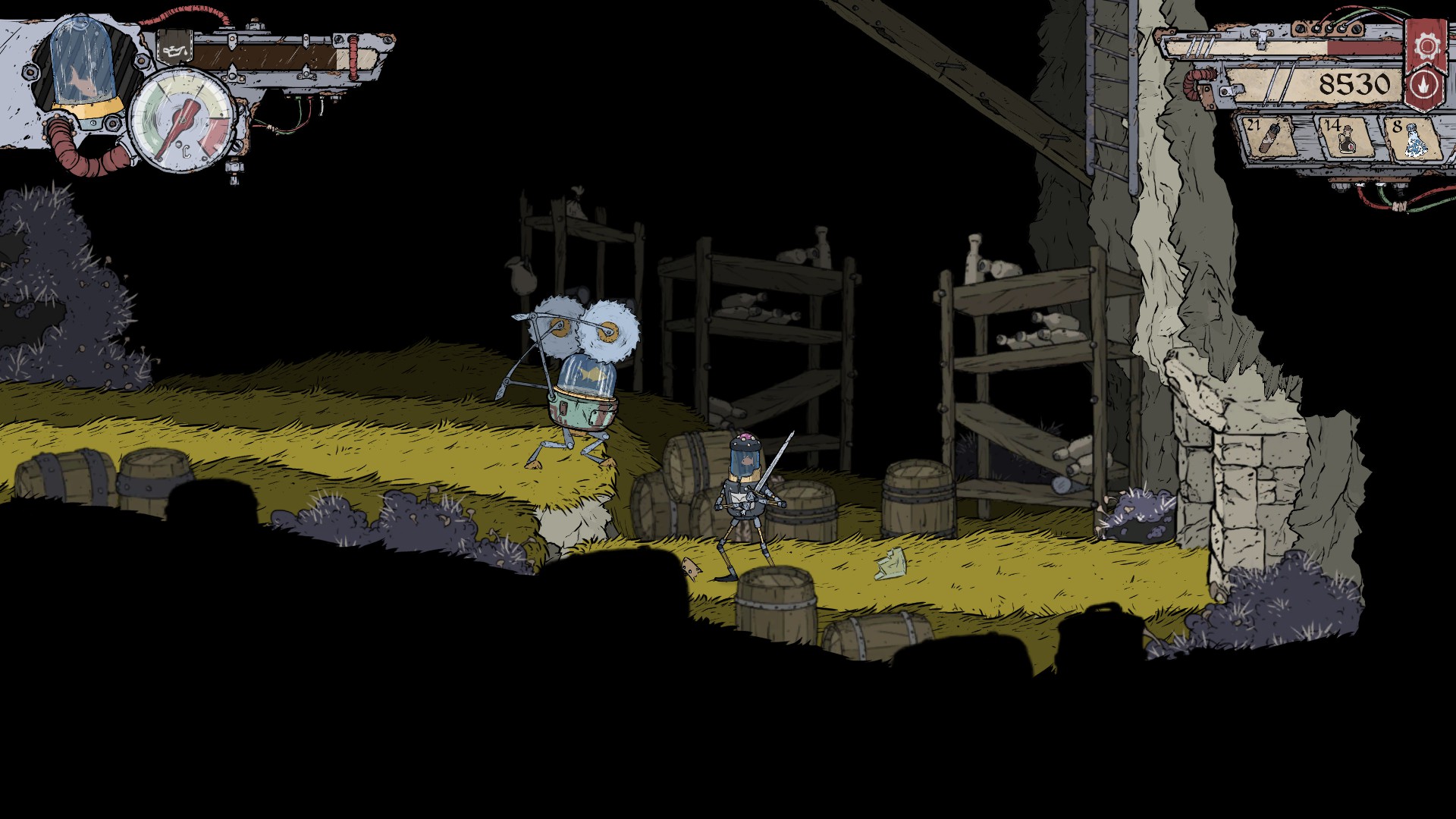 The game also has a leveling up system, but it’s one which doesn’t really change much in terms of the gameplay itself. As you defeat enemies, you can salvage some of the scrap from their remains, which pretty much acts as collecting experience points. Once you’ve gathered enough scrap to level up, you can choose to allocate a skill point on one out of three different skill trees. Sadly enough, these are pretty much just passive bonuses, like increased health, better cooling, and so on, there’s nothing really particularly fancy or jaw-dropping, which is quite a shame.

I have to say that I did have a nice time with the game, but it also needs to be said that the game’s combat does suffer a lot due to a lack of movesets or combos. Pretty much every fight can be won by just spamming the attack button, as enemies are really easy to outrun by using the dash ability. Also worth noting, is the fact that enemies will often just stand still looking at you if they’re at a different elevation. For example, if you’re on a platform just slightly below or above the one a specific enemy is, you can pretty much just exploit this and attack them without them doing anything. Still, this obviously only works for non-flying enemies. Speaking of which, the game actually throws at you a decent amount of different enemy types right almost up until the end of the game, but after a certain point, you start seeing the same enemies over and over. 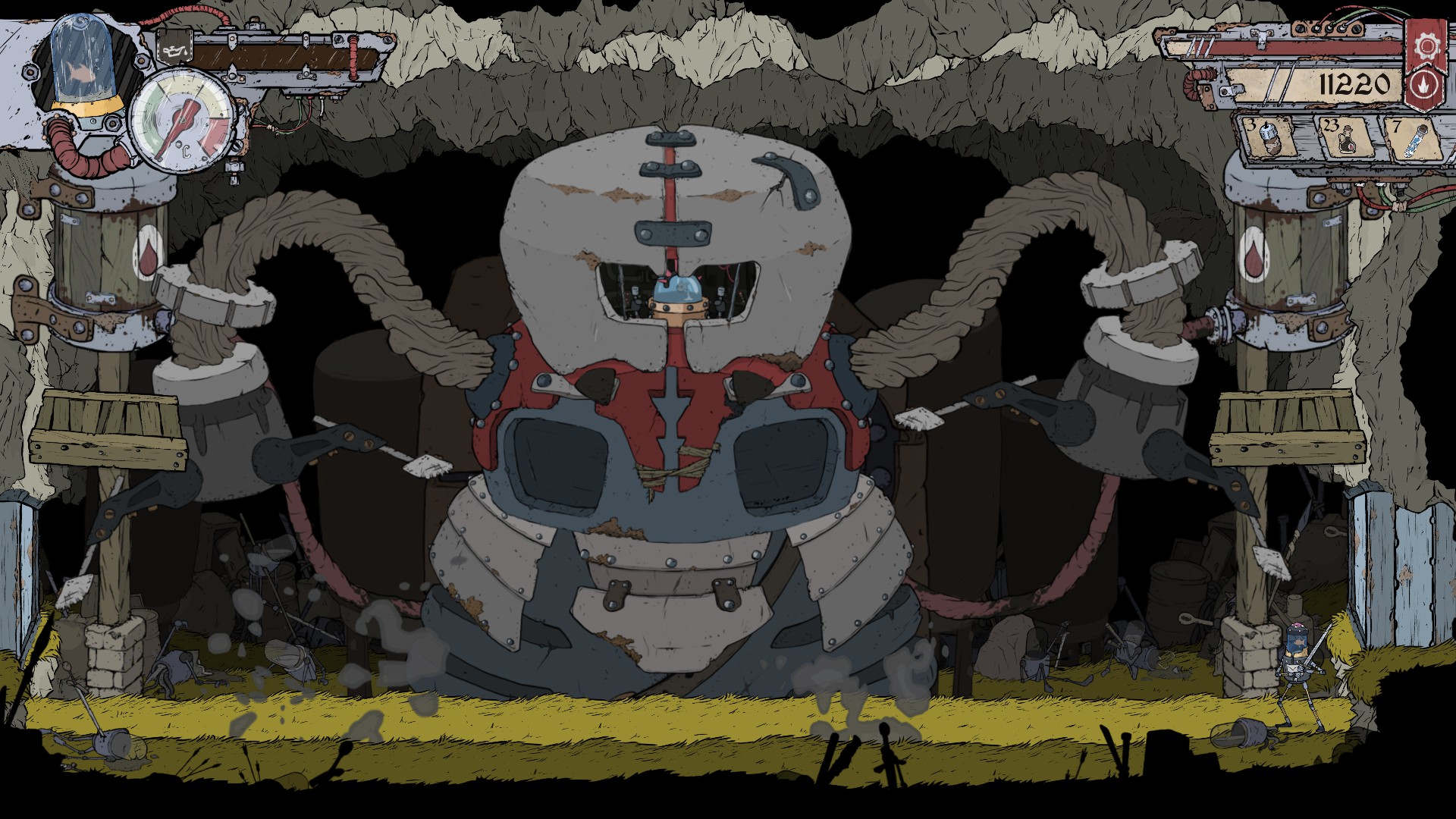 Feudal Alloy isn’t a bad game by any stretch of the imagination, but it just fails to deliver a meaningful and refreshing experience. The combat is extremely simplistic, the music is highly repetitive, and there’s no story nor character development at all, all you get are two cutscenes, one at the beginning and one at the end of the game, which ultimately results in a highly underwhelming experience.

With that said, I don’t think that it’s the simple combat approach that hurts the game the most, as that spot is probably best saved for the lack of any substantial plot, as this makes the ending boss fight feel overly anti-climatic. Overall, while Feudal Allow might be rock solid, as a whole it feels like something that was left unfinished. For that reason, I’d recommend you save it for later, and grab it on sale if you’re a fan metroidvanias and are just looking for something new to play within the genre.