You’re better off waiting until 2084 when this game is finished.

2084 was a pleasant surprise to see. A commendable game for a 72-hour project and a very promising one given it just released in Early Access. However, it has way too many design problems to keep me from recommending it at this stage. That being said, it’s certain to be one to look out for in the future…

Currently, the game consists of three levels that can be played and beaten in the combined time span of 40 minutes. Yep.

The story is told through cutscenes that happen between levels (not that they matter, and one of them was the protagonist, named Laura Lofi, grabbing a drink from her fridge, no joke) in a very simple and unrevealing fashion. You have no idea by the end of what you’re doing, what caused the events of the game or even what happened to you.

I say “happened” because, interestingly, the game happens in two sections. The first, told through cutscenes, is the real-life part of it; the second is the VR sections in which the protagonist enters a digital world overrun by insane mutated humans, though, you don’t actually play the game in VR. It’s this second sections which consist of the whole gameplay component. There is almost no story or exposition besides a few text collectibles that really don’t tell the player anything concrete or even interesting.

It’s obvious the game will have a much lengthier campaign down the line with a more fleshed out story and lore (or at least I hope). However, right now it’s barebones. There is potential here for a good plot, level variety, and a nicely built lore about this dystopia, but in its current state, there is merely a hint of all that.

You’ll feel how early access this title is from the get-go. You have one weapon, a laser rifle similar to the one found in Inversion and sort of along the lines of the modified sniper rifle from Wolfenstein: The New Order. The gun feels decent enough, the recoil is non-existent and there’s nothing extra interesting about it besides its rather odd yet cool design. Enemies die from headshots far more easily than body shots and bosses soak massive amounts of LMB-Holding, which is really annoying as you can assume. 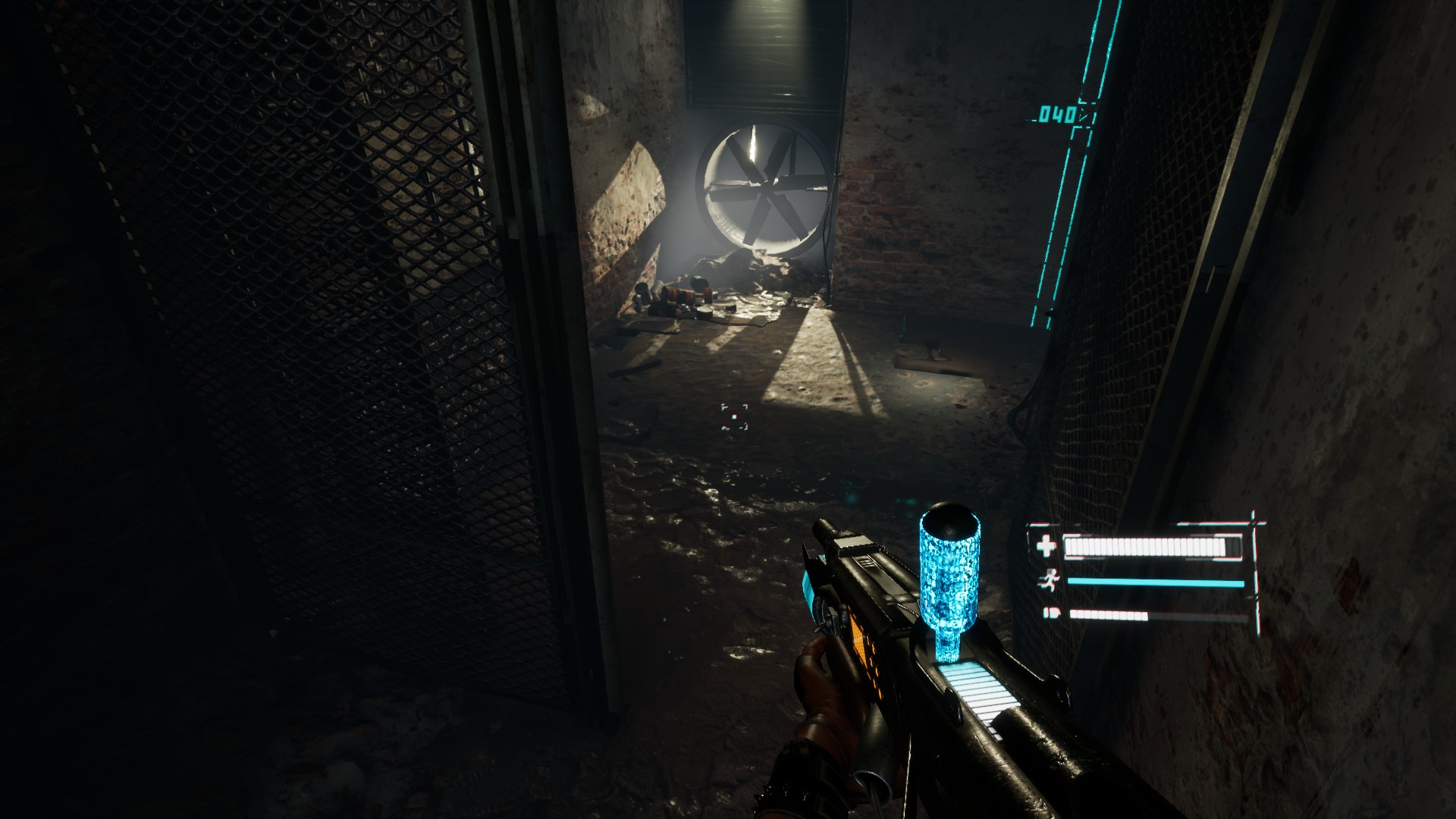 Here is a nice showcase of the game’s shadows, enhancing the atmosphere and showing the nice weapon design.

The game intensely promotes its main attraction to the gameplay: the hacking! Hacking is a key press sequence mini-game. You enter hacking mode, time slows down and you need to press up, down, left or right in a random sequence by using W,S,A or D, respectively. Something done in, for example, Helldivers. If you know how interactivity is done there, you’ve played this game’s gimmick.

And that is… it. There’s no variation in the minigames like in Alien: Isolation, nothing. Also, everything hackable consists of pre-determined enemies or objects that are highlighted in blue so that it just doesn’t feel interesting because you can’t open new routes in the levels (which are incredibly linear) and you just see the same hackable stuff: the ammo/health stations, the mini-turrets, the TV’s and… the bosses. Yep, the bosses use the hacking mechanic to make them feel fresh but are the most predictable thing ever. One of the bosses is literally a spinning cube that never moves, shoots a laser clockwise (and later alternates with counter-clockwise motions) and… that’s it. To kill it, you hack one of its sides and shoot it until the cutscene triggers.

The level design is another component that needs fixing desperately. It is the most railroaded game I have played in months. There is barely an inch of explorable terrain that isn’t the path you’re forced to go through. The starting level is just a bunch of narrow corridors with doors that open and enemies come out of. It’s a pretty level, and has a cool asylum vibe… but it’s a chore to go through a maze of walls that look the same where you can barely see corners because the corridors are extremely narrow to the point of probably causing claustrophobia for more sensitive players. The following levels are more interesting, a small back alley of a city that leads to a church that is quite pretty in its overall design. It’s just too bad none of it is explorable, has any lore, or includes interesting things to investigate or check.

Another thing to note is that pretty much everything in the levels (objects, structures, textures) look exactly like something from observer_, a game made by some of this game’s developers. So this literally feels like a boring corridor shooter in the observer_ universe; it may even be in the same universe.

To top everything off I’ll talk about the enemy variety. It’s as barebones as it can possibly get: you have your standard “zombie” (it doesn’t look like one but sure acts like it), a shrunken version of it (which when killed makes the sound of glass shattering, likely a bug or incorrect audio file, but still worth noting), and TV-headed zombies, which you can hack to break the television, stunning nearby enemies.

Every enemy looks the same (not counting bosses here), so why should anyone bother with the endless survival mode unlocked after completing the tutorial? It literally drops you in a small arena where you have a score at the top of your screen. Have fun circling around endless trains of zombies without any purpose or progression.

2084 is a rather pretty game, despite the zombies looking quite bad and the fact that upon their death they pretty much disappear in a quick animation where they essentially disintegrate into oxygen. The shadows look quite well done and the overall atmosphere is surprisingly solid. It pretty much, as I mentioned above, looks like observer_: the FPS. 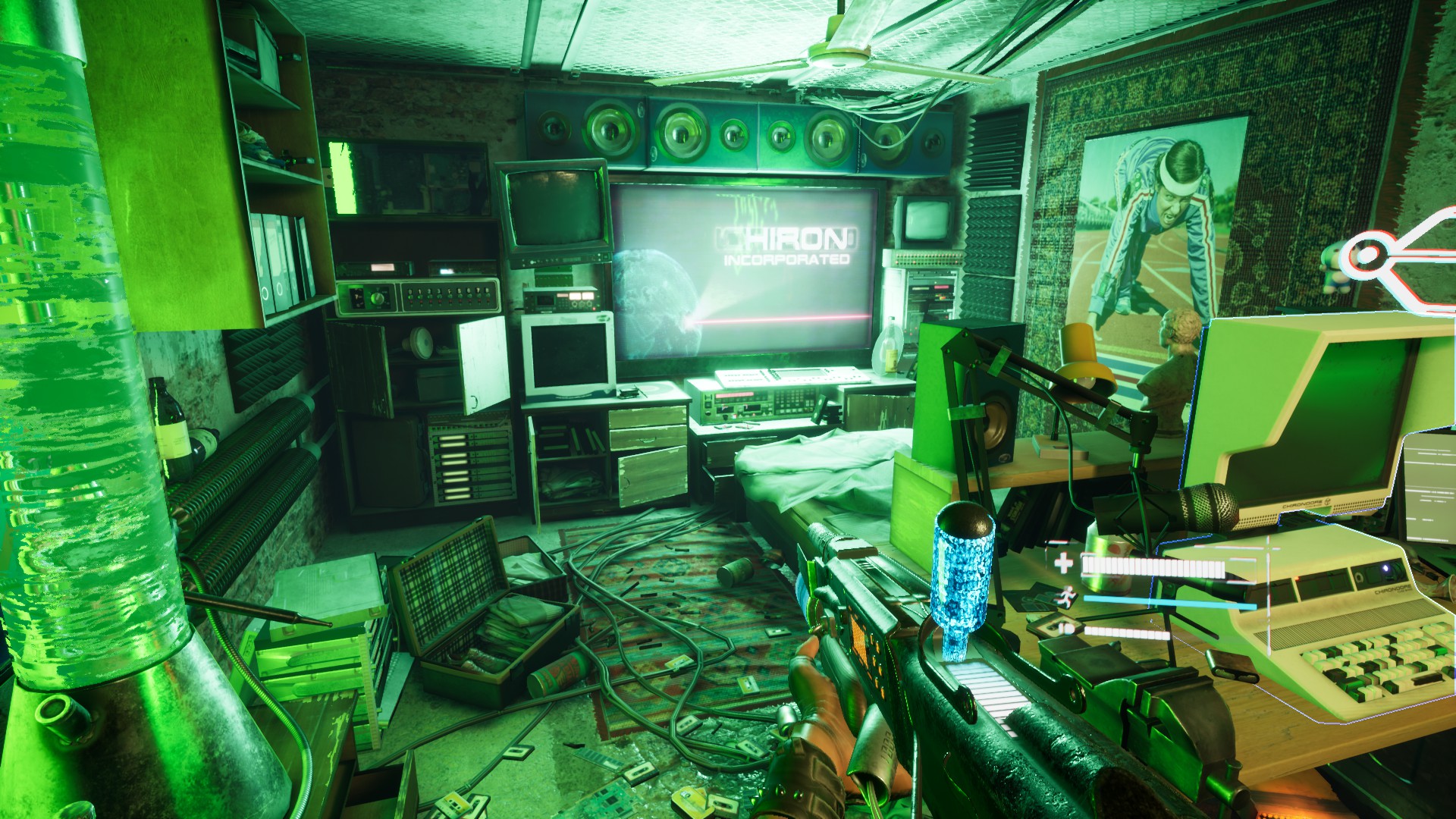 The audio is a mixed bag, the voice acting is decent and the cutscenes sound quite good but the environment sounds are awful. Turrets fire lasers which are abnormally higher pitched than anything else will nearly melt your ears. The zombie roars have no direction, so my headset just pops with a general sound from which you can distinguish the location of origin and makes the combat sort of confusing in a bad way. 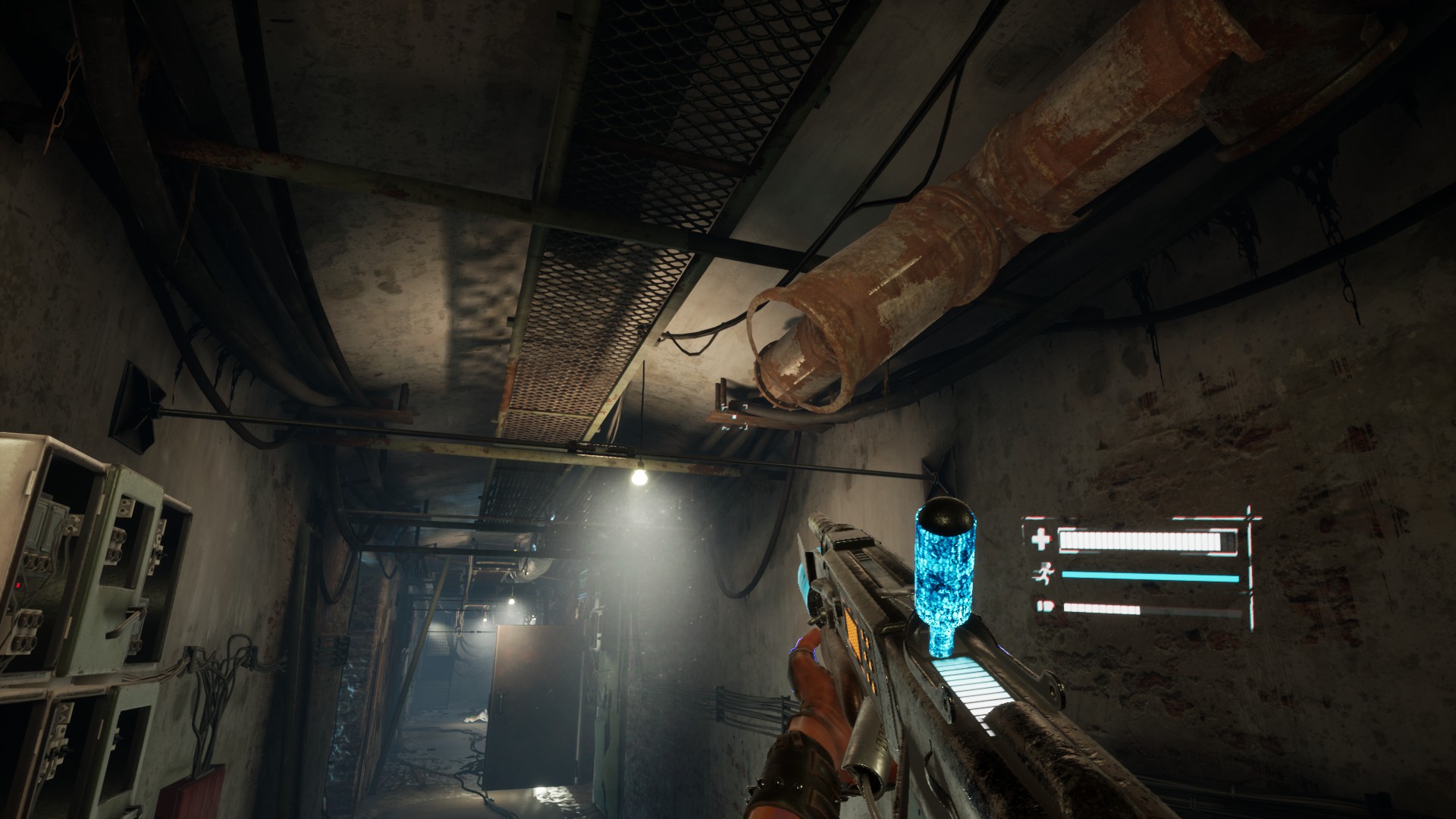 Some bugs need ironing out too.

A final thing to note is the performance (something expected since it’s early access) but it’s not great, I have frame drops to the 40’s in 1080 Ultra (and even when I lowered the settings to medium), so it needs some performance enhancement in future updates.

In the end, the gameplay is a boring, generic mess. I don’t like it, but it was done in 72 hours as a small project and that’s better than anything I ever produced in my computer graphics course in college. The potential is here, the weapon design is interesting enough to make me want to see how a full arsenal would be made. The enemies are boring but with some work, some really interesting humanoid or even robotic enemies could come into play. The level design is terrible since it is so short, I expect a few hours of better levels down the line, which is totally feasible, especially with a hacking mechanic which, while gimmicky, can be extended into something more interesting and fun instead of a glorified quick-time event sequence.

Potential is the key word here but, sadly, I don’t think you should buy it right now. I do, however, recommend following it as constant updates can drastically improve this game and the developers might be sitting on quite the gem here with some time and hard work.