After a successful Kickstarter campaign, Battle Princess Madelyn has successfully launched. But does it have what it take to keep you hooked throughout its entirety?

It honestly seems like it was an eternity ago when I first heard about Battle Princess Madelyn, but not even two years have actually passed since the game was first launched on Kickstarter and received well above the amount the team was looking in order to get the project funded. Nonetheless, the development process felt like it didn’t want to attract any attention to it, and admittedly, the game’s launch seems to have been kind of underwhelming, but why exactly is that?

Battle Princess Madelyn draws a lot of inspiration from old games such as Ghouls ‘n Ghosts and Wonder Boy 3, so if you’ve ever played those games, chances are this one will likely feel very familiar to you. The game focuses as much as on platforming as it does on combat, but it comes with some glaring issues that might only become evident once you’re a couple of hours into the game.

First and foremost, if you’re one of those people that don’t have the tendency to search the forums or look elsewhere for answers, someone who just buys games and wants to play them right away, you’ll probably feel confused once you’re in the main menu. The game offers both an Arcade and a Story mode, but it doesn’t tell you what the differences are between these two. You’d only know the difference between them if you’d do some digging on the Steam forums, because even in the Steam store page, while they’re both mentioned, there is no explanation as to what each of them really entails. 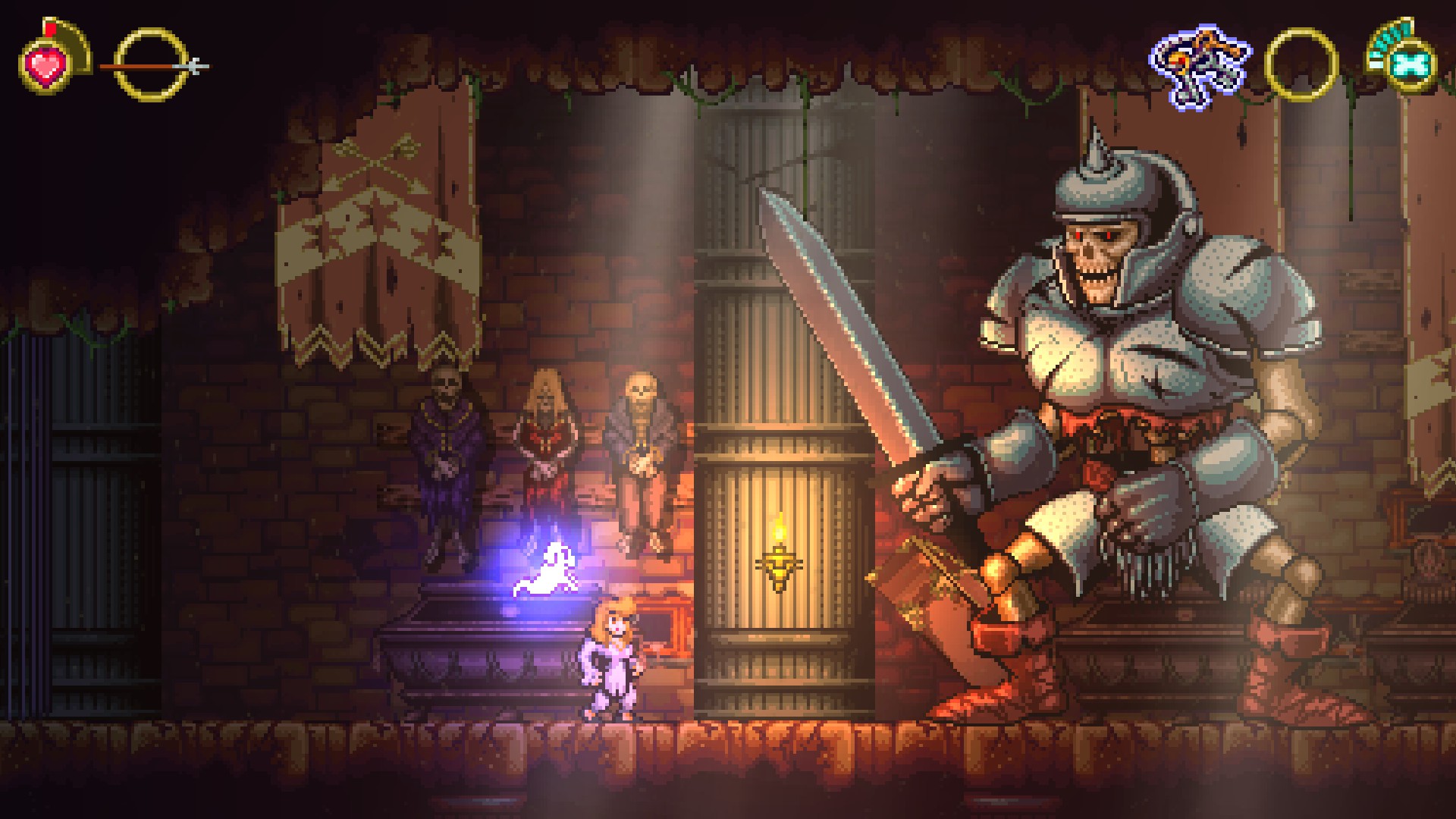 While I have not played the game in Arcade mode, for reasons I’ll reveal later, from my little time with it, what I understand is that it’s essentially a hardcore mode. While on Story mode you’d get your armor back everytime you died, in Arcade mode you don’t, and there’s always a score counter at the top. Other than that, I’m afraid I can’t really provide much more insight into the matter.

Now, right from the start, you can immediately tell that the game looks and sounds pretty great. Interestingly enough, you can set the game so that the soundtrack is played in either an orchestral or arcade tone, which switches the music to a style more in line with the time period from which the game is heavily inspired. The world of Battle Princess Madelyn is surprisingly huge, being divided into 10 major areas and smaller zones inside each one of them. The music does a good job in setting the mood of each one of them, as it pretty much changes everytime you travel to another area. On the other hand, while the lovely pixel art style remains pretty homogenous throughout the majority of the game, there are subtle differences in the color palette that help you distinguish different zones, besides obvious drastic changes in scenery (different trees, buildings, etc.). 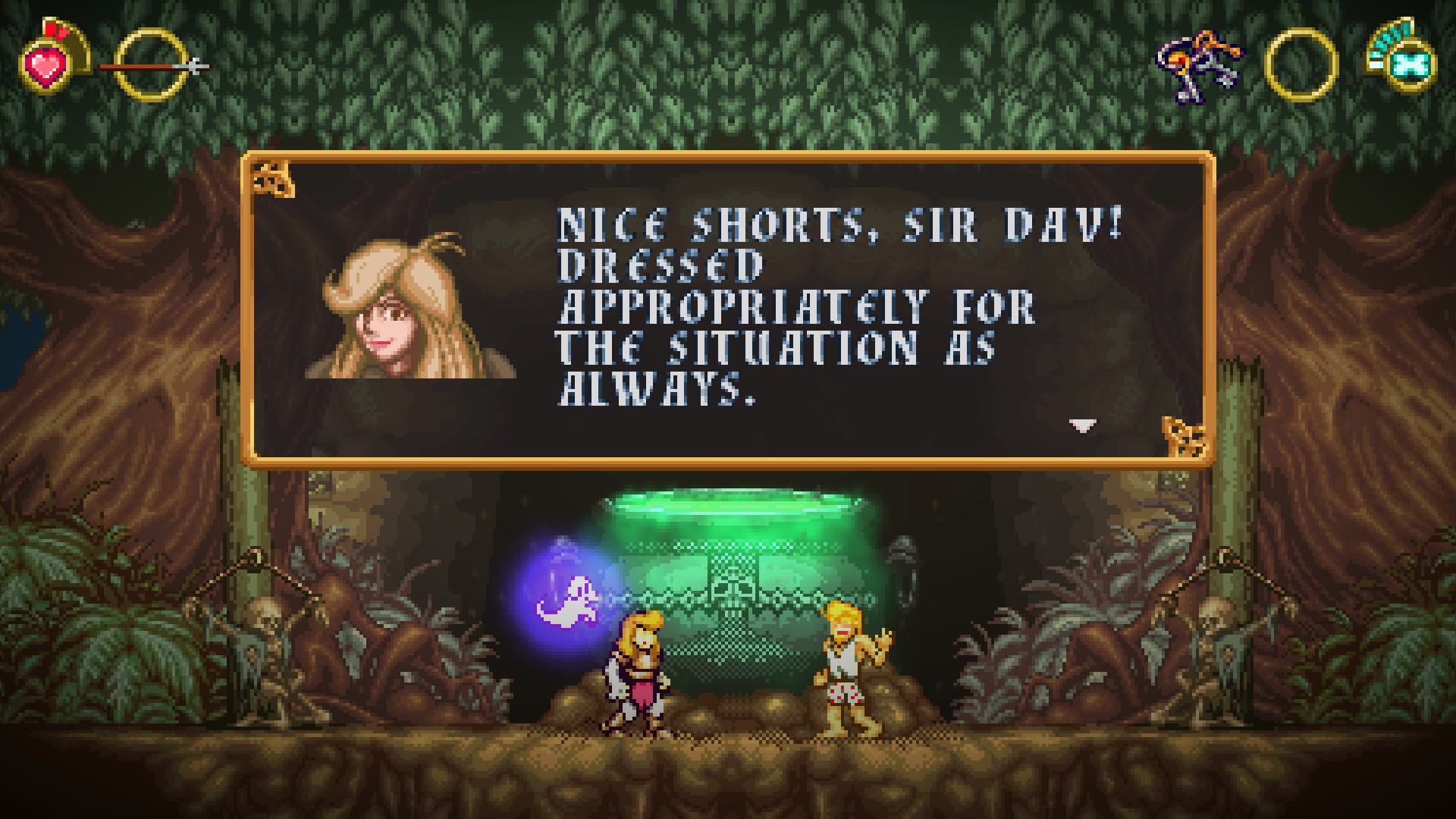 Battle Princess Madelyn is an action platformer through and through, but it almost feels like it’s a Metroidvania at times. The game puts you on the shoes of Princess Madelyn, who’s trying to save her family and the whole world from one big evil wizard. At first, you have nothing but a standard spear (which you can throw, thus making it an endless supply of spears) and the ghost of your trusty dog, Fritzy. However, soon enough you’ll be able to acquire other weapons, like daggers, magic wands, and so on, but do keep in mind that all these are throwables, as combat revolves around the use of ranged attacks. With that said, I do find the combat to be rather underwhelming. Not because combat is only ranged, not because the game doesn’t offer enough enemy variety to keep things fresh, but because all you’re doing whenever you’re facing an enemy is either, jump over or under them and completely avoid them, or spam the attack button as fast as you can until they eventually die. This is particularly annoying during boss fights, as you attempt to strike the boss weak spot as fast as you can during the short time windows in which it’s vulnerable.

Perhaps I’m just asking too much of Battle Princess Madelyn, but still, the truth is that while I was enjoying the game tremendously at first, that sentiment quickly wore off for a multitude of reasons. The first one would have to be issues related to the hitboxes. You see, there are a lot of times when it seems that you won’t get hit but you end up taking damage, which can lead to some frustrating experiences. On top of that, whenever you get hit you get knocked back in the opposite direction, which most often than not can push you down an abyss, thus instantly killing you. Death doesn’t necessarily mean that you restart at your last checkpoint, as whenever you die, you respawn right back where you fell, as long as you have enough energy, which can be refilled by killing enemies. However, if you don’t have any energy left, you’ll be tossed right back to the start of the level, and some levels can be quite long. Tough luck, mate. 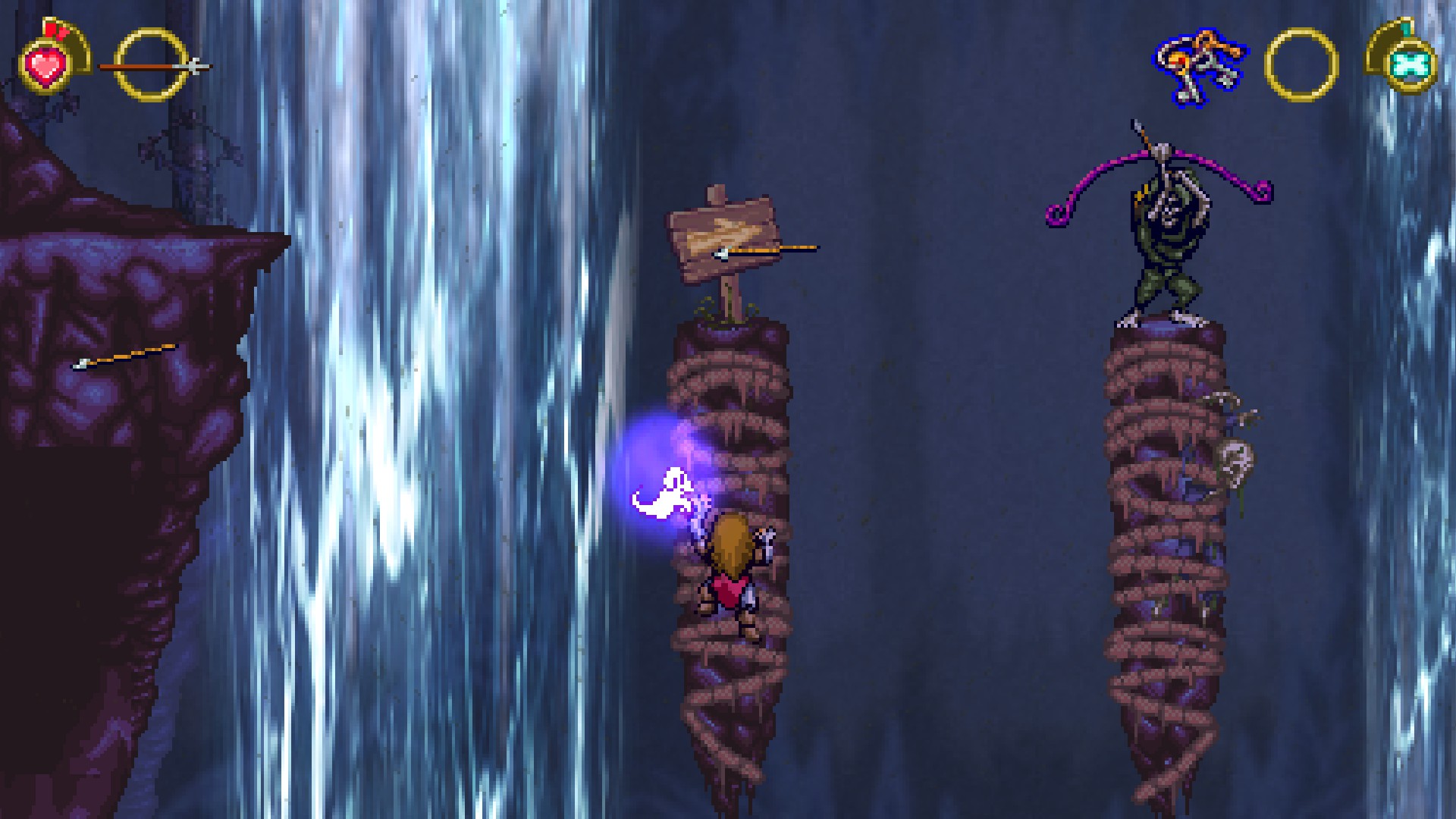 My second biggest complaint has to do with the fact that the world is pretty open, there is no navigational help whatsoever besides a fast-travel system, and there are tons of tasks given to you by NPCs which you have no way to keep track of. Now, some zones can look quite similar throughout the entire area, but the real navigational difficulty comes into play when you clearly have no idea what you’re supposed to do or where you’re supposed to go. I have just over 21 hours in this game, and I feel like I’ve spent more time trying to figure out where I had to go next than actually fighting, exploring, and just enjoying the game.

The game does an awful job at explaining itself, and some people, like myself, will find that really off-putting. There were often times where I’d exit the game and go back to it on the next day and I couldn’t remember where I was supposed to go next. Please note that I have no squabble with games that don’t hold your hand, but the issue here is that even though there’s no way to track where you’re supposed to go, you also can’t interact with whoever talked with you on the last time in regards to the main story. This means that you’re out of luck, and good luck finding whatever is the right way. 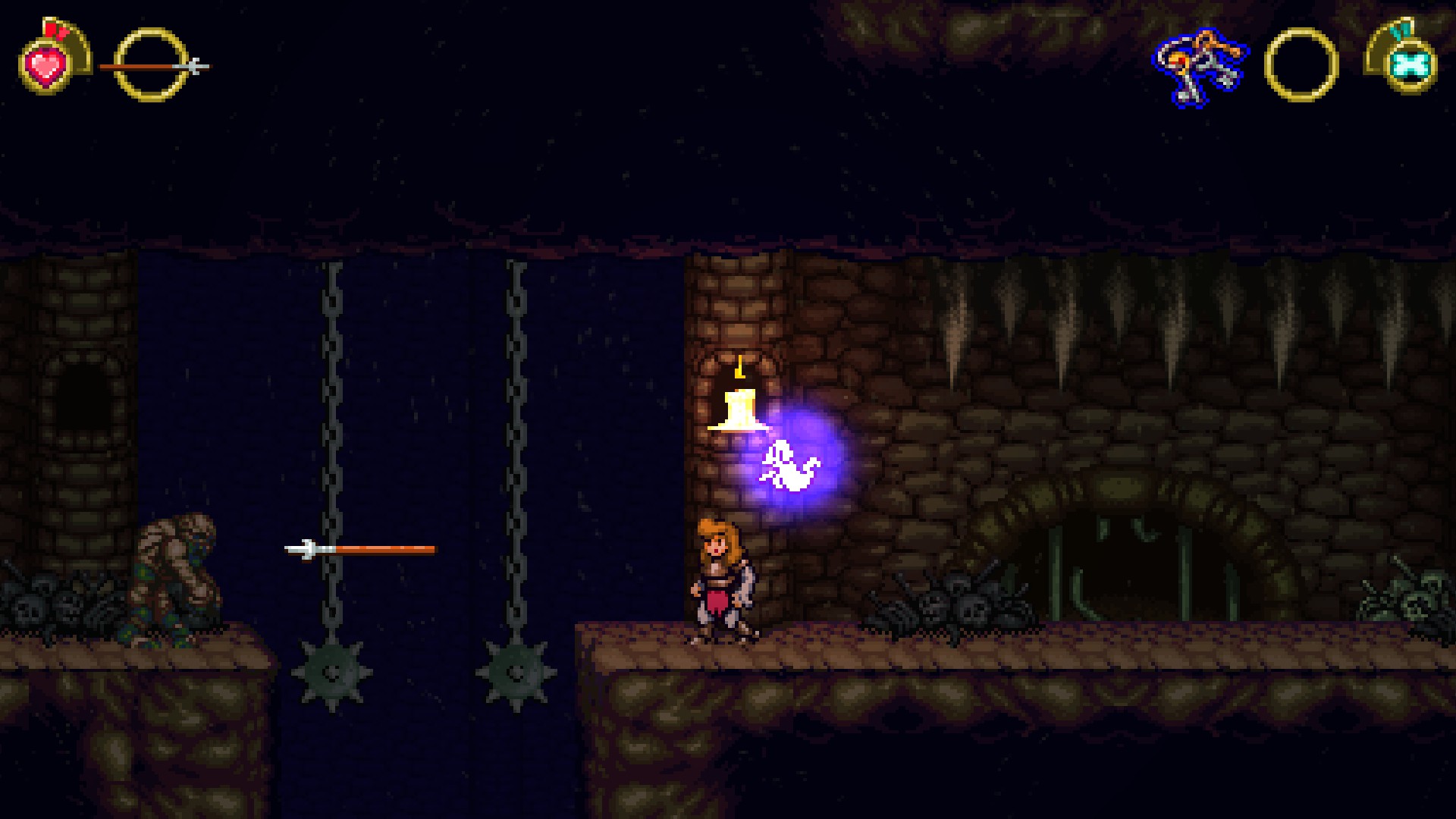 Furthermore, while I’ve enjoyed the boss design in the game (even though I’m not a fan of the combat), there’s nothing more tedious than realizing that after beating a boss you have to walk all the way back to the nearest teleportation stone, even though there’s clearly nothing else to do in the area. I understand that this might be done in order to promote exploration, which in turn would hopefully make it so that players run into some of the pointless fetch “quests” that the game has, but shouldn’t exploration really be an option for the player?

The game also doesn’t come without a pair of technical hurdles, one of which I hope you’ll be able to avoid by reading this. One really aggravating issue is the fact that the game is really loud by default doesn’t have a volume slider, either for music or sound effects. I had to lower the volume of the game on Windows to 10% (!!!!) just to make it bearable. Other than that, as someone who hates controller vibration, it would’ve been really nice to not have to deal with the constant rumbling, but unfortunately, there’s no option to turn it off. Hopefully, these two minor complaints will be fixed in the future with an update, as well as the few random crashes that I’ve encountered. 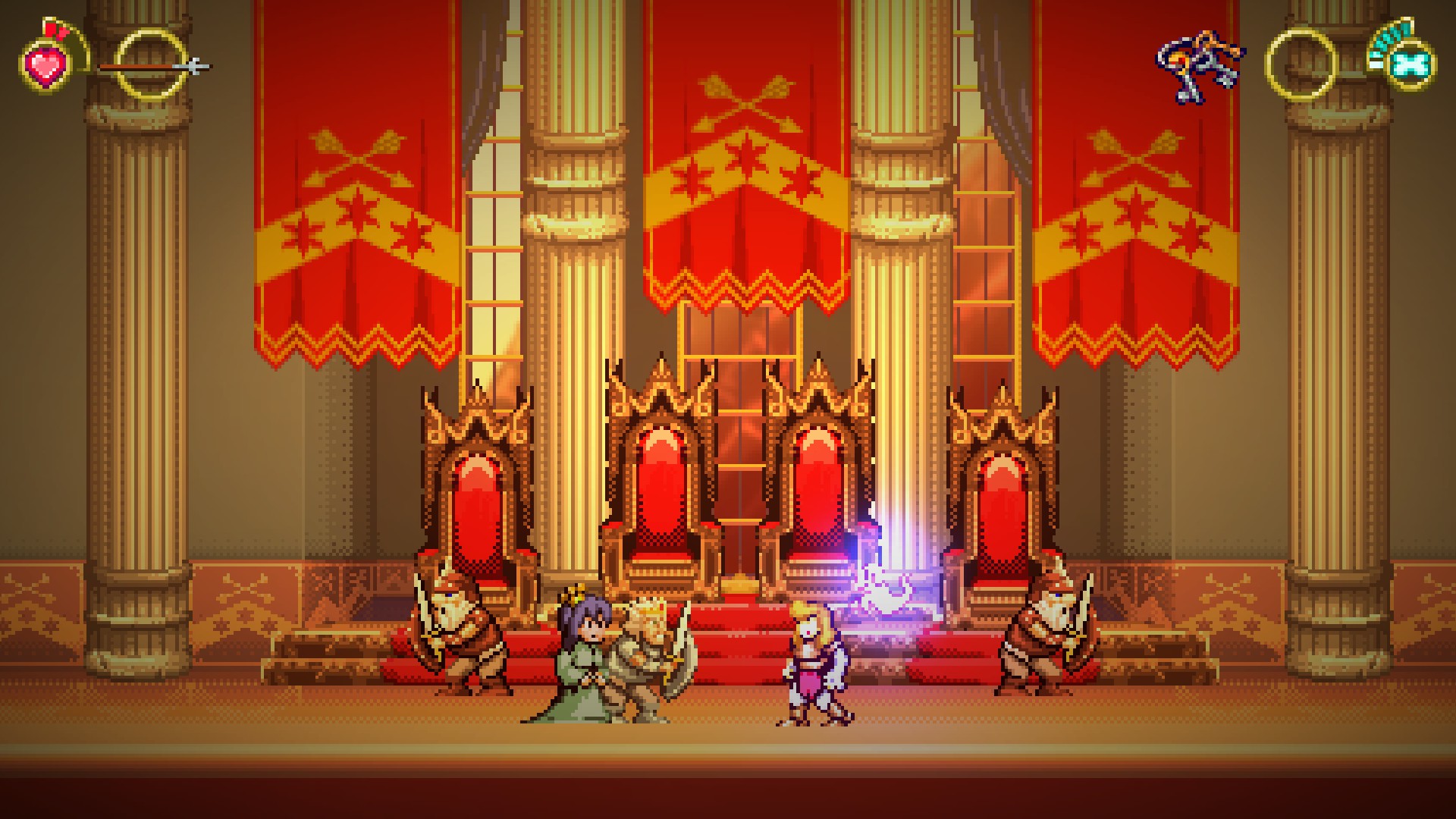 While the game certainly starts off strong, the more I played it the more issues I started. running into, and from there forward it just kept getting more and more cumbersome. I don’t think that Battle Princess Madelyn is a bad game, it’s just that it’s plagued by really bothersome and archaic systems that only make everything much more frustrating than it should be. But still, even if it wasn’t plagued by these issues, there isn’t really anything that sets it apart from others in the crowd.

I have poured about 21 hours into this game, and while I can’t tell you how long it actually is, I can safely say that I will never go back to it, mainly because I’m pretty sure that I’ve spent over 75% of my time dealing with bugs or trying to figure out what I was actually supposed to be doing (imagine my surprise when almost at the end of the game I find out that I missed on an NPC that lets you upgrade your weapon and armor, just because I didn’t complete his “side-quest”). As far as the game’s own difficulty, it’s not really that challenging, at least not on Story mode, and I can’t be bothered with Arcade at this point. In the end, while I’m giving this game a PAUSE, I certainly do not recommend it at all in its current state.