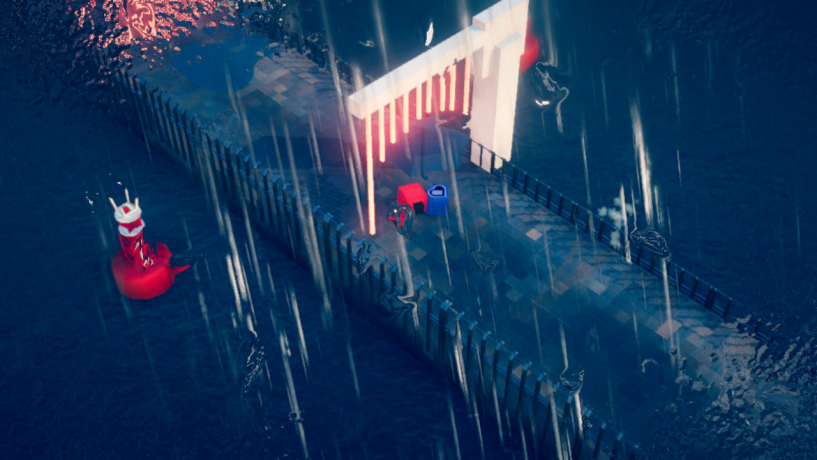 Man, someone seriously has to take care of this Glasist problem.

Have you ever been in a situation where you have a deadline, but everything seems to get in your way and take up valuable time? Or perhaps you were on the verge of completion (or even completed it), but the universe decided to hate you that day and bring your progress all the way back to 0%? It is an absolute pain when it happens, especially if you need to redo everything and you know it won’t turn out as well as before since there is less time to get it done (man, I had my fair share of essays/projects going down the drain). Well, now you can live through that experience as a cube.

In Zarvot, you happen to be a little blue cube named Charcoal. It just so happens that one of Charcoal’s friends, Red, has a birthday coming up and in preparation, Charcoal and Mustard have been gathering some items that they knew Red would absolutely love. All they needed was one last item to tie everything together, a banana. While obtaining it was a breeze, more or less, the universe decided that the trip back home won’t be. In their rush to get to Red’s house before the day ended, they got into a tragic skateboard accident. Luckily, neither Charcoal or Mustard were injured, but both the skateboard and the gift ended up destroyed.

Despite giving Red a haphazardly thrown together gift so she would at least get something, Charcoal and Mustard can’t let that perfect gift idea go to waste. Recreating Red’s gift may be a pain, but it will be worth it at the end to see Red happy. 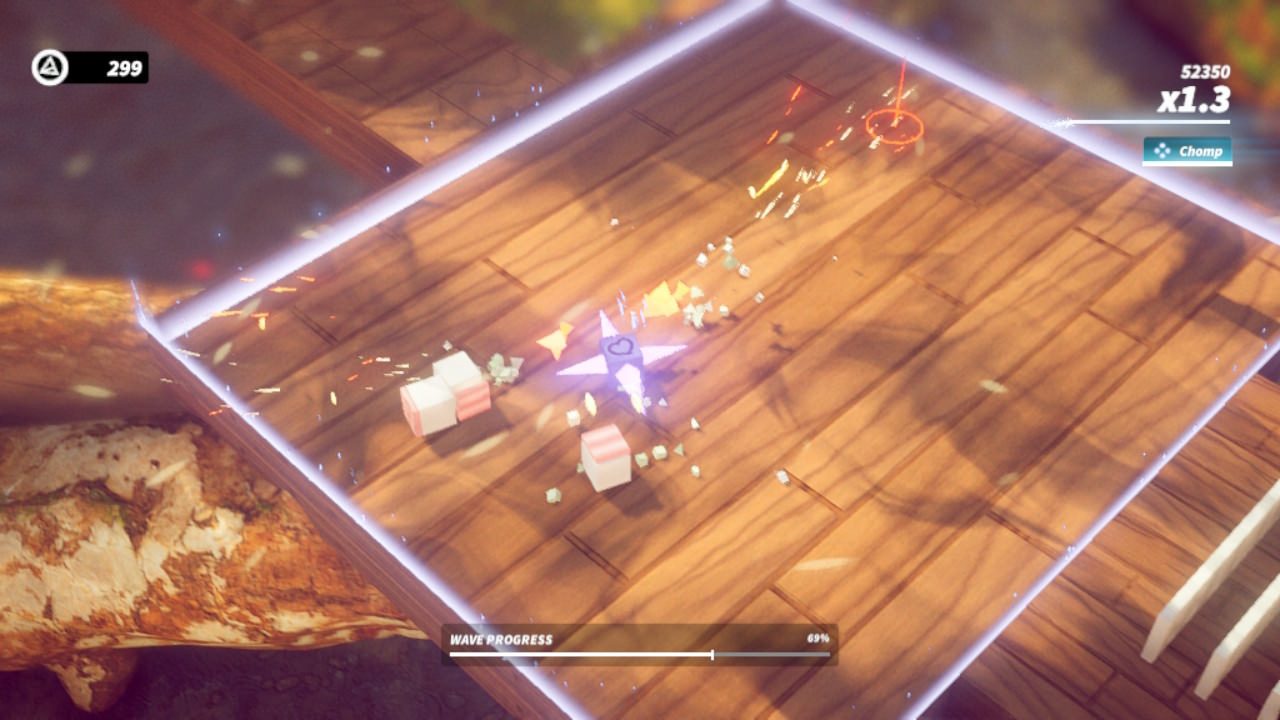 Sadly, getting each gift is not as easy as going to the store. Okay, there are stores but the road to actually getting there is dangerous. Around every corner are enemies, called Glasists, and these can and will pop up to stop you in your tracks. While there are some situations where you can go around them, most of the time you will be boxed in with the Glasists till all of them are destroyed (you do get a handy progress bar though). Charcoal, in particular, is equipped with the ability to shoot lasers out of his face (mouth?). You have your usual quick laser shots and the charged laser if you want to deal more damage to more enemies. Are those Glasists getting too close for comfort? You can dash/jump away or take out your blades to get them to back off. Some attacks in your arsenal are riskier, but can be useful, as you can make a temporary wall to block incoming attacks from one direction or a radial beam to hit anything that’s on the circle outline. Although, you can’t attack constantly as Charcoal can overheat. This makes you cautious of how fast you attack since overheating can cause a Glasist to slip past and land a hit. Though, by far, the one attack that you need to use to your advantage is the chomp, which is charged up when maintaining a hit combo. When chomp is ready, all you have to do is press all four action buttons by an enemy and Charcoal will take a bite out of them. This is the only way you can get your health back during a wave of enemies, so make sure to use it if you’re not sure you can go through without taking a lot of damage. 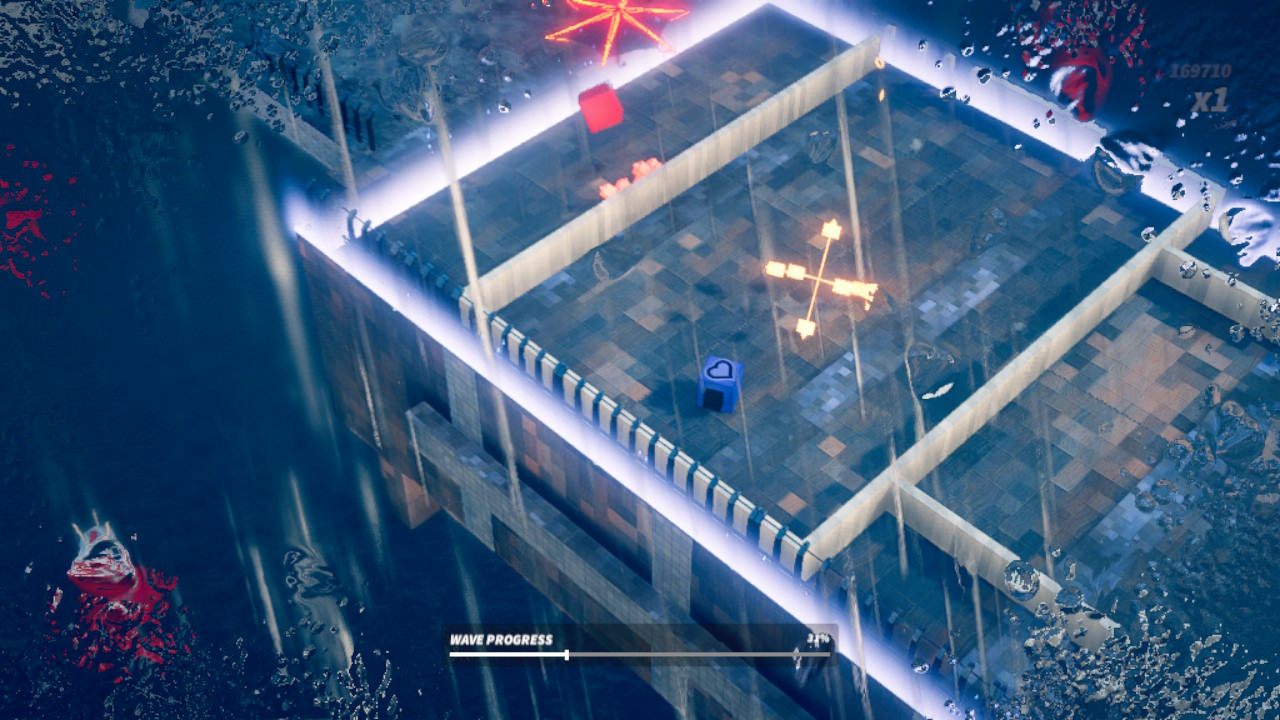 If you’re worried about Zarvot not being challenging enough after learning the ropes, you can leave those worries behind. While the first Glasist type is easy to handle, you quickly get new Glasists that acquire different ways to tell when they’re attacking and how to defeat them. Some will pump their back to bring their attack out, others will have a crystal-like skin that can only be broken by your Chomp or radial beam. Some will also protect their vulnerable body with an outer shell, and others can even do a long distance attack. As you progress through the story, new enemies will stack upon ones you already encountered and can easily result in a hectic battle to stay alive as you desperately try to dodge all the different attacks till you can get an opening. You also have the bosses, which show up at the end of most chapters, as your last obstacle to obtain another item for Red’s gift. 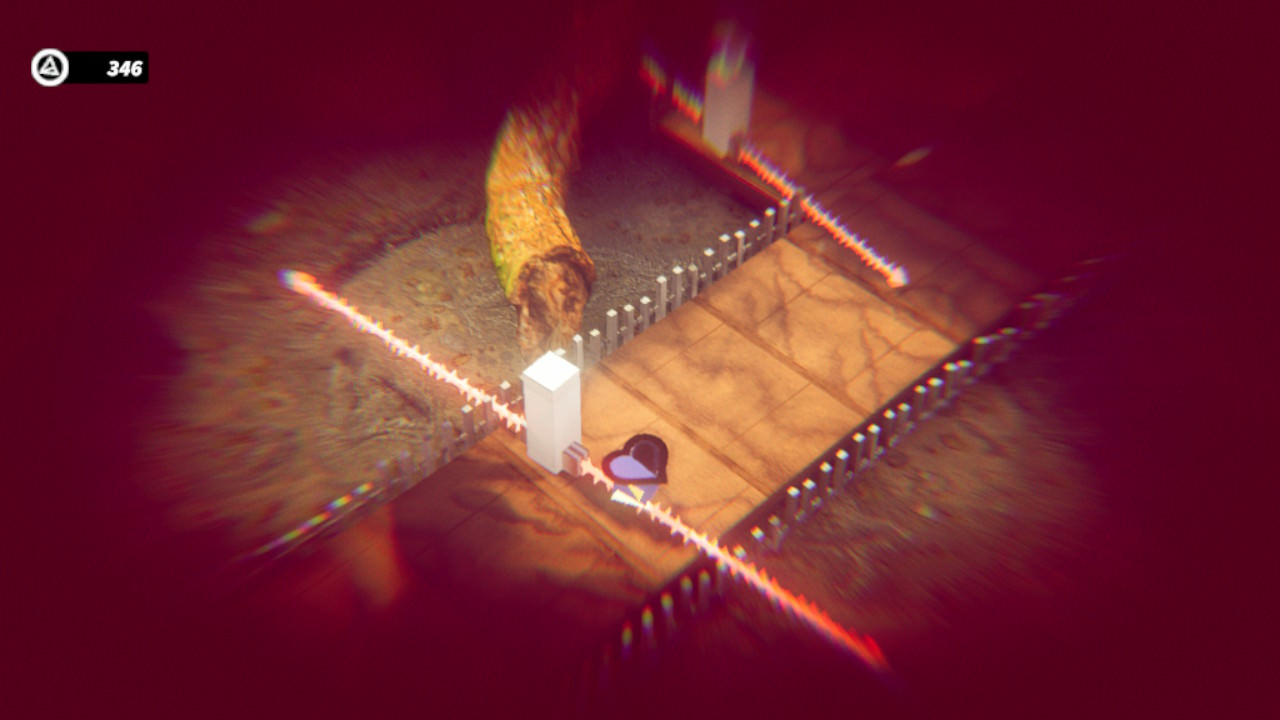 If someone asked what was my favorite thing about Zarvot, I would have to say the boss fights. Each boss has their own unique look and mechanics that differ from the usual enemies. Apart from the bosses increasing in difficulty as you progress further in the story, they have different phases that ease you to their other more difficult to dodge attacks. Since the bosses can’t be affected by the Chomp attack, they will also spit out an enemy, which will also have a new skin to match the boss, after taking a certain amount of damage so you can regain health. I won’t spoil the bosses, I want you to be as surprised as I was, but I will tell you that I was often excited to see how the next boss battle would play out. Also expect a hard battle, these bosses will not go down without putting up a good fight. 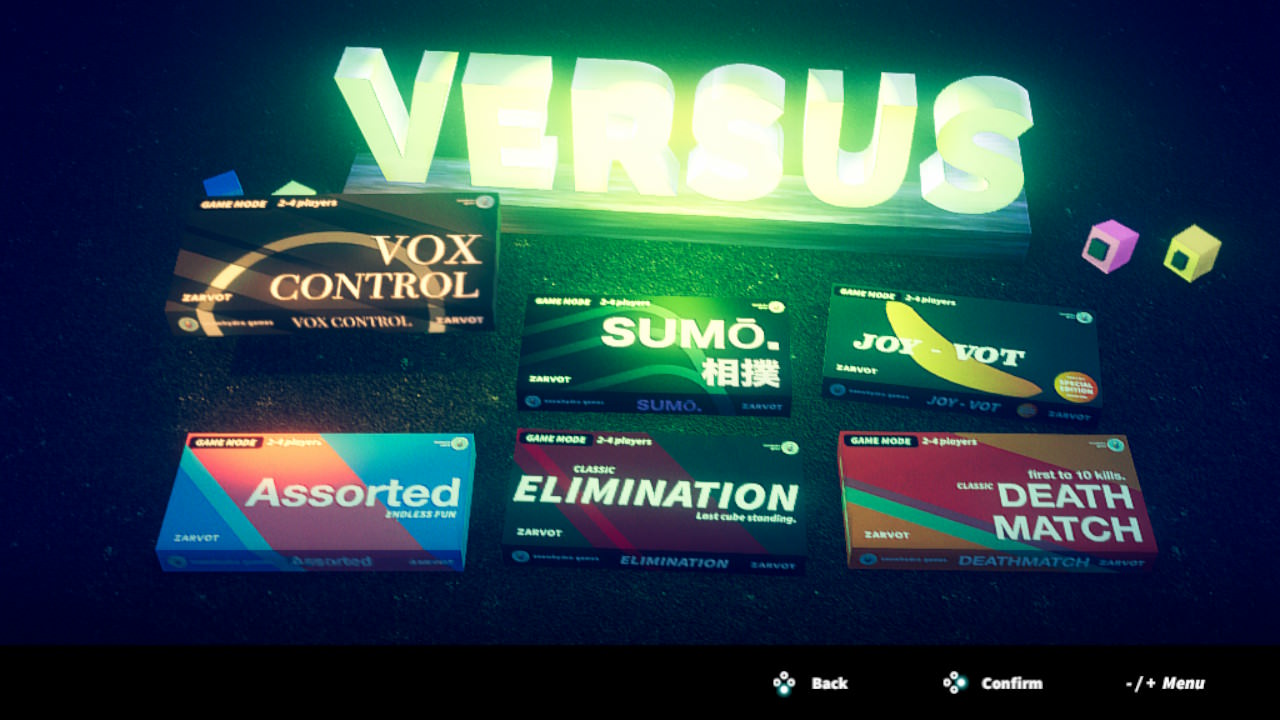 When you’re finished with the story, or just want to take a break from it, you have arcade and multiplayer mode to dive into. With arcade mode, you do need to play the story as Arcade maps are hidden in each new area you encounter. When you decide to play one, you will be faced by five waves and be challenged to get through them as fast as you can without dying too much. In local multiplayer, or versus mode, you have a variety of options to enjoy with your friends. There are six modes you can play and each one is pretty fun. You have the classic Elimination where you have to be the last cube standing three times, Deathmatch mode that awards the first cube to get 10 kills, and Assorted which basically randomizes which mode comes up. Next you have Vox Control where pieces of sushi drops down and the first person to 30 wins, but dying will result in all of your collected sushi to drop for your opponent(s) to pick up. You also have Sumo where you have to try and get the other player off the map Super Smash Bros style. Lastly, there is Joy-Vot, where one player is a banana that can spawn enemies and shoot a continuous laser. The player that is the banana has to try and kill the cubes, while the cubes have to try and kill the banana player. Between these six modes and 19 maps that each have their own layouts and obstacles to deal with, there is a lot to go through. However, you will need to unlock a good deal of it. You will start out with only three game modes (Elimination, Deathmatch, and Assorted) and 11 maps. As long as you keep playing multiplayer, you will unlock the other game modes (which seem to unlock first) and more maps to play on.

Sadly, there’s no online multiplayer, but there is a chance that it will be implemented later on. So if you’ve been hoping to play with others online, you may need to wait and see what the future holds for Zarvot. 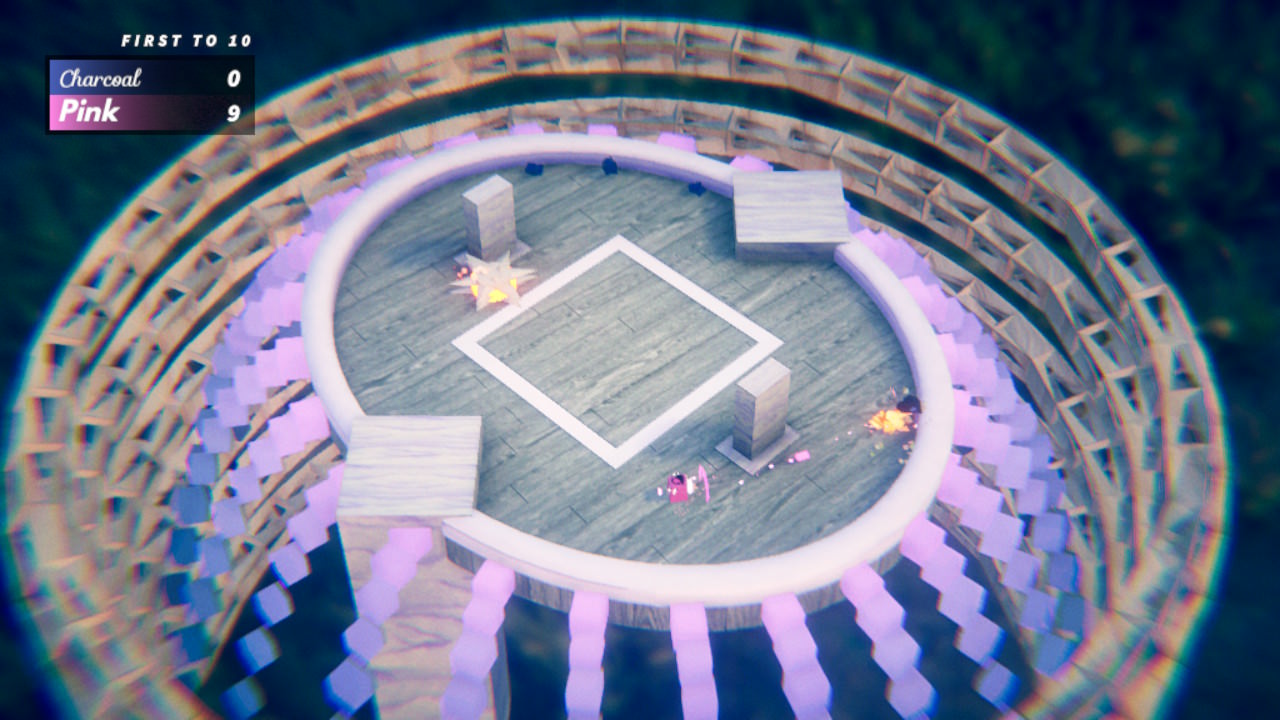 I’m honestly really surprised with Zarvot. For a game that could have been easily just been a competitive multiplayer game, the developers made a leap to incorporate a good story that is easy to get invested in. Not only that, but the managed to make simple, different colored, cubes to have their own personality, quirks, and have readable emotions. I also appreciate that Zarvot was designed in a way that you can play the multiplayer mode with one Switch. I would have never been able to try it out and see how much fun it was otherwise! While there are some small parts I personally didn’t like (I didn’t exactly like the blur effect in some cutscenes and the thin platforms in one chapter was the worst), I enjoyed every second. If you’ve been looking for another Switch game to add to your library, I recommend taking a look at Zarvot.